Most Anticipated Roller Coasters in 2021

2020 was hyped up to be an exciting one for new roller coasters. We were even asking questions like “will 2020 be the best year for new roller coasters ever?” We all know how that turned out. But 2020’s losses could become 2021’s gains. In fact, five out of our top ten most anticipated roller coasters for last year were delayed and are now scheduled to open in 2021 (or 2022 apparently). Combine these with a few new coasters sprinkled in and 2021 may turn out to be a great one for roller coaster enthusiasts despite the global pandemic.

Disclaimer: This list is “as of right now” and is liable to change. In fact, we already updated the list. We had Aquaman Power Wave at Six Flags Over Texas (which was on the 2020 list) but have heard it has been bumped back to 2022.

This year, we’ve broken our most anticipated new coasters list into two segments: United States and International. Let’s get to the lists!

Track has already been completed for Aventureland’s third new roller coaster in the last six years. Dragon Slayer replaces the former Dragon roller coaster. This S&S 4D free spin appears to be a modified version of the popular 110 model seen at many Six Flags parks. 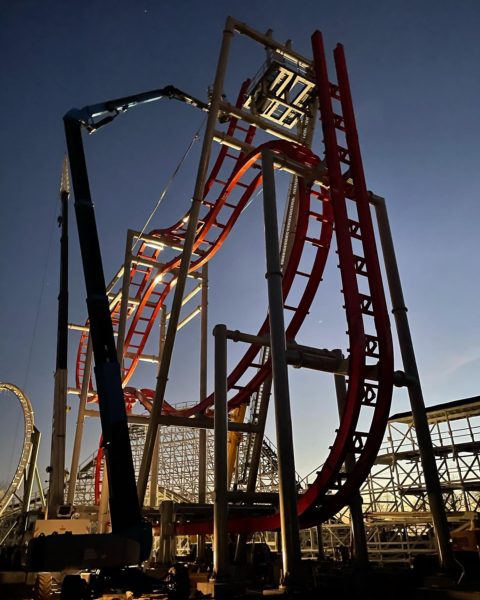 Well this was a nice surprise. Early this year, it seemed as though Indiana Beach would cease to exist. New owners have rejuvenated the park and they’ve shown they are going to invest in it. The park announced plans to build a triple-looping Schwarzkopf roller coaster and a “Polyp” spinning flat ride for the 2021 season. Originally built in 1984, the compact Schwarzkopf coaster stands 111 feet tall and reaches a top speed of 53 mph, pulling 4.7 g-forces as it maneuvers through three vertical loops. It was the world’s first coaster to feature three vertical loops. The coaster’s track stretches roughly 3,444 feet in length. The ride is being relocated from the now-defunct La Feria Chapultepec Magico amusement park in Mexico City where it was known as Quimera. So no, it’s not exactly “new” as this will be the Schwarzkopf coaster’s fourth home at a permanent theme park. 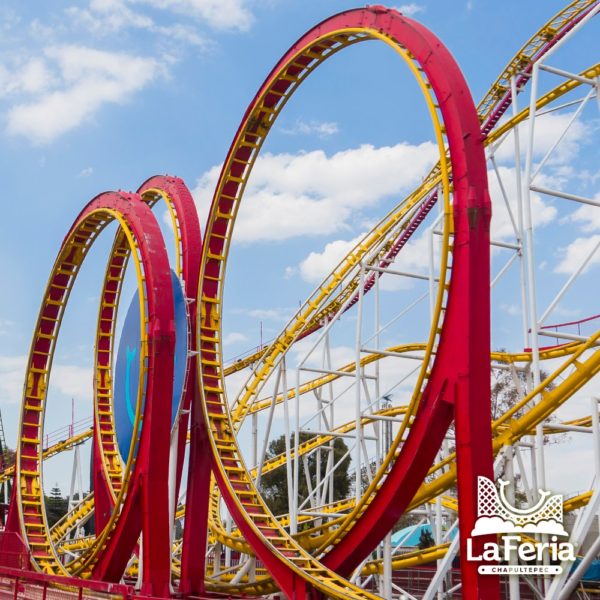 Long overdue for a new roller coaster, Silverwood is partnering with nearby Rocky Mountain Construction on Stunt Pilot. The height of the roller coaster is 105′ tall, and it features a near vertical drop, hairpin turns, aerobatic maneuvers and three inversions. It will reach a top speed of 53mph. Stunt Pilot will be a smaller single-rail RMC Raptor model, similar to that of Railblazer at California’s Great America and Wonder Woman Golden Lasso Coaster at Six Flags Fiesta Texas, however, will feature two trains instead of three trains, and the Stunt Pilot trains will have ten cars instead of eight. 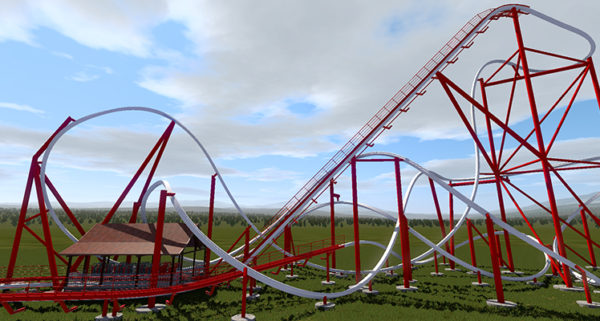 Rowdy Bear Ridge in Pigeon Forge will soon be home to the world’s first CoasterKart. Wiegand has built hundreds of alpine coasters across the globe. Now they’ve taken that technology a step further with a powered coaster arrangement where rider’s push a pedal like a go cart to go zooming around a roller coaster track. Yes, like many other attractions in the Smoky Mountain, one has to ask “is this really a roller coaster?” But since new rides are thin on the ground right now we’ll take it. CoasterKart is a true competitor for Maurer’s Spike Coaster, as it looks to be much simpler and could also be used on cruise ships.

Emperor, while becoming the tallest coaster at SeaWorld San Diego when it opens in 2021(hopefully), it will actually be the the smallest B&M dive coaster in the United States. The trains will featured 6 across seating (Valravn has 8 across. Griffon at BGW has 10). Emperor will also be first B&M Dive Coaster on the West Coast.

Don’t let the short track length of Ice Breaker fool you. The three LSM launches on Ice Breaker are multi-directional, so you’ll actually be traveling on 2,750′ of track, including a 90-foot tall vertical spike tilted at 100-degrees, the steepest past-vertical drop in Florida. Take a virtual ride by watching the Ice Breaker POV below.

A custom designed “Raptor” coaster from Rocky Mountain Construction, the Jersey Devil holds the honor of being the world’s longest, tallest and fastest single rail coaster. Reaching speeds up to 58 mph, riders will straddle the single-rail and experience three intense elements and two inversions through the dark and foreboding woods.

Billed as the world’s fastest multi-launch coaster, Pantheon at Busch Gardens Williamsburg looks to be an airtime machine, featuring 15 airtime moments. Not only will Pantheon have four launches, but also features a 95-degree drop and two inversions. We’re excited to see the “Power of 5 Roman Gods” come together for what’s sure to be an awesome ride experience.

This ride just looks bonkers. Steel Vengeance at Cedar Point was #2 on our list of best steel coasters built in the 2010s, and Iron Gwazi looks like it could challenge for the best steel coaster of the next decade. Iron Gwazi features a 91-degree drop, 12 airtime moments, and a top speed of 76 miles per hour, setting records as the tallest hybrid coaster in North America, and fastest and steepest in the world. Be sure to check out our interview with project manager Andrew Schaffer to learn more.

Last year we had Iron Gwazi #1 on our list. Even though it’s been delayed, it’s been bumped to the #2 spot by VelociCoaster at Islands of Adventure. This double LSM launch coaster looks unreal by itself, then you add on the Jurassic Park theme and it puts it over the top. Speaking of top, there is a 155 foot tall top hat element followed by a 100 foot long upside down stall. Check out the fan made POV below to get an idea of what the experience may be like:

As we’ve said, it wouldn’t be a huge shock if any of these coasters were delayed until 2022. If that’s the case, simply replace that one with one of these honorable mentions:

Similar (or possibly exactly the same) layout as the acclaimed Intamin blitz coaster Taron at Phantasialand in Germany. 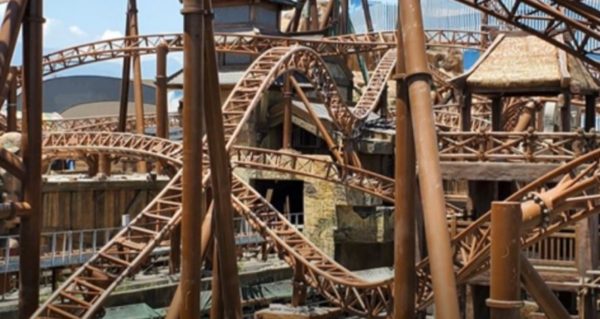 Another near clone, this time a copy of Blue Fire at Europa Park, although instead of using a single launch, Steel Taipan will incorporate a switch track and spike to launch the coaster forwards, backwards, and forwards again.

Cloned rides aren’t a bad thing as long as you’re copying good rides. Universal has taken the infamous roller coaster from Island’s of Adventure, The Incredible Hulk, and made it the centerpiece of their newest part, Universal Studios Beijing. The ride is themed to the Transformers franchise and uses a tire propelled launch. 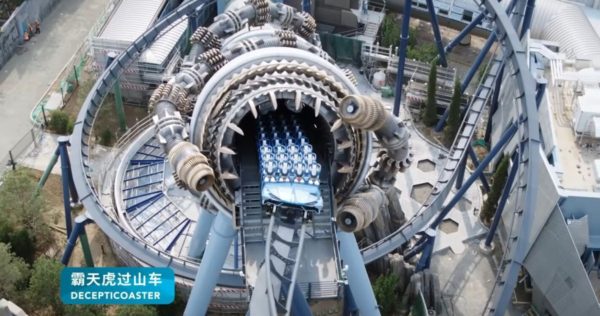 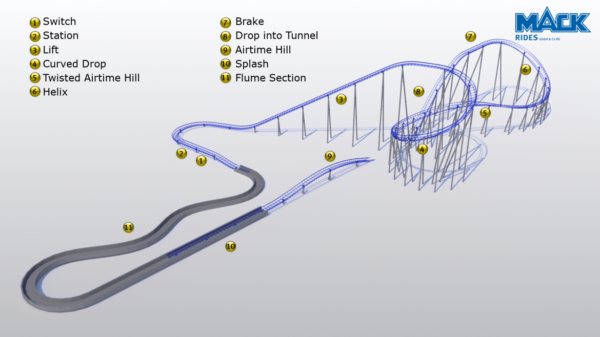 Monster looks like an incredible feat of engineering and design. B&Ms are big coasters and they squeezed an action packed ride into a small space surrounded by buildings and other attractions. 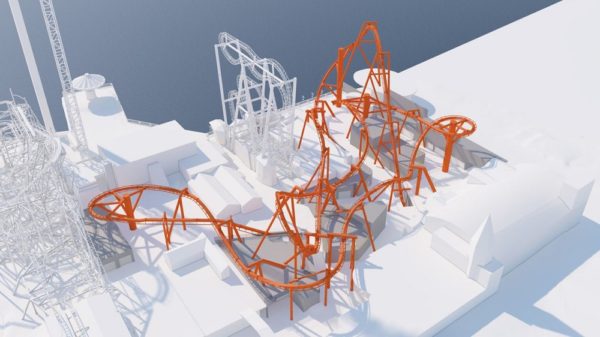 Sadly the only wooden coaster on either list, but it looks like a good one. Interestingly, the last car on each train will supposedly face backwards (seems to be a popular thing to do in Australia).

Earlier this year, Intamin unveiled four new coaster concepts, one of which was the Hot Racer, Intamin’s answer to Rocky Mountain Construction’s single rail “Raptor” coasters. The first Hot Raver is coming in 2021: Big Dipper will feature two launches and two inversions in a compact layout with multiple airtime moments. 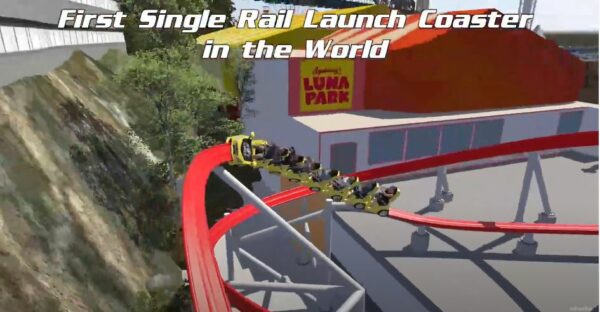 Energylandia is well on their way to becoming the roller coaster capital of the world. They’ve opened 15 roller coasters since the park opened in 2014 and they’ve got three more coming in 2021. Abyssus is a new Vekoma shockwave coaster with two launches, multiple airtime moments, and four inversions.

Seems like Time Traveler is just a working title for now. Extreme spinning coaster with two launches and tons of crazy looking elements. And did I mention the cars spin. This ride looks absolutely insane!

Can you say airtime machine? Kondaa has 15 airtime moments including the world’s first non-inverting cobra roll. Salivate at the fan-produced POV video below.

There are a few international coasters that I think might have been able to push their way onto our list if we only had more information about them.

Which new 2021 roller coaster are you most excited to ride? Let us know in the comments below!