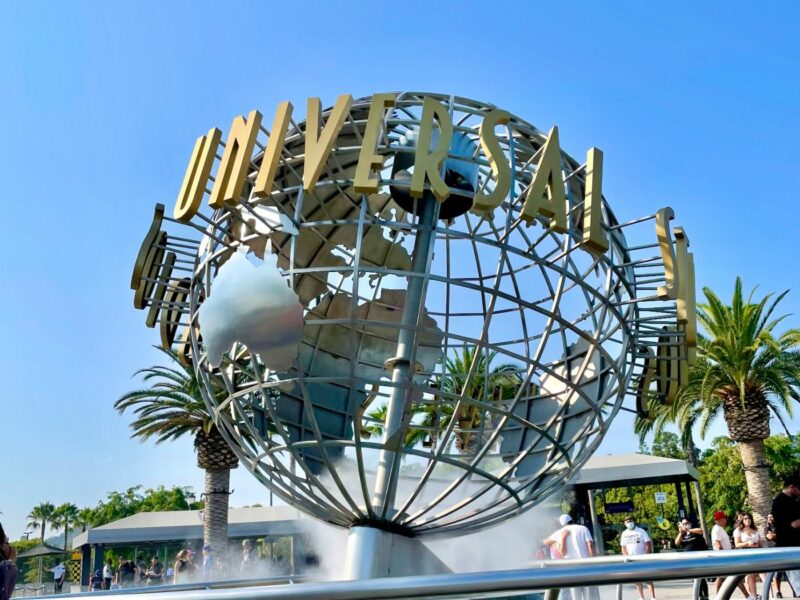 A couple of quick notes, we didn’t include the Special Effects show because it just came back recently and wasn’t running every day. We also didn’t include the Wizarding World shows because they don’t have an enclosed venue or queue, so it’s easy to catch a little bit of them without planning around it. Lastly, we passed on the kiddie attractions in Super Silly Fun Land, but I’m sure they’re great. 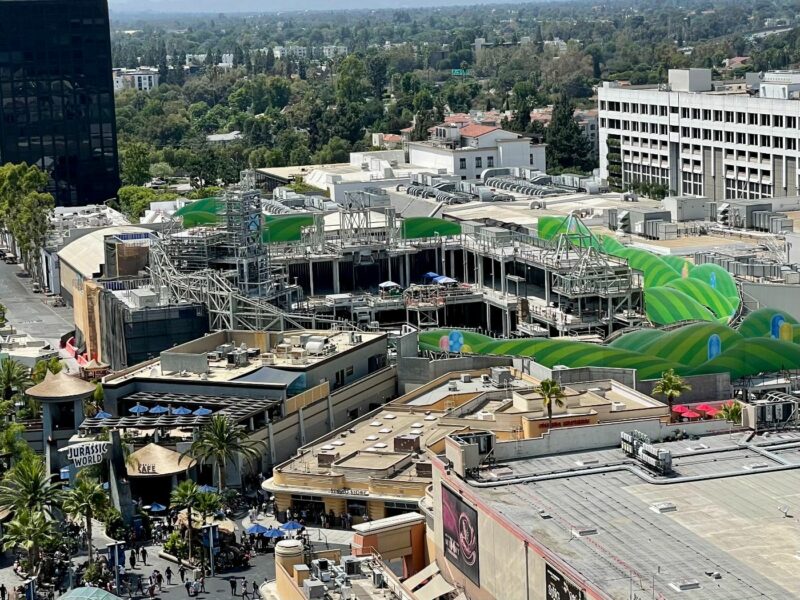 Super Nintendo World under construction, August 2021 — the area is scheduled to open next year.

I think it’s also important to say that all of these rides are pretty fun! If we were giving them grades instead of ranking them, even a bunch toward the bottom of our ranking would be solid B/B+ rides. There’s not really a “skip” in the bunch.

Here are our rankings, let us know what you think!

On all of our most recent visits, the Special Effects show wasn’t happening. We decided it wouldn’t be fair to try to rank it without seeing it on recent trips (my memories from years ago were being a fan, but hard to say where we would rank it now). So we’re taking a pass on it this time, but we’ll re-rank these next time we get a chance to see it!

The Animal Actors show isn’t bad, but it’s not the most exciting of shows. Seeing the tricks the animals can do is kind of neat, and the silly little story with them is great for kids. The best parts are definitely when the more “unusual” animals perform. Seeing a dog do tricks is one thing, seeing a pig do tricks is much more surprising. So, good for kids, but probably not something we’d go out of our way to see if we had a time crunch.

Harry Potter fans definitely won’t skip the Olivander’s show, and the little effects in the wand choosing ceremony are fun. But, let’s be honest, this is just a show to try to get you to buy a wand, right? We do like that it often has a pretty short line, so easy to do while wandering to or from Forbidden Journey. 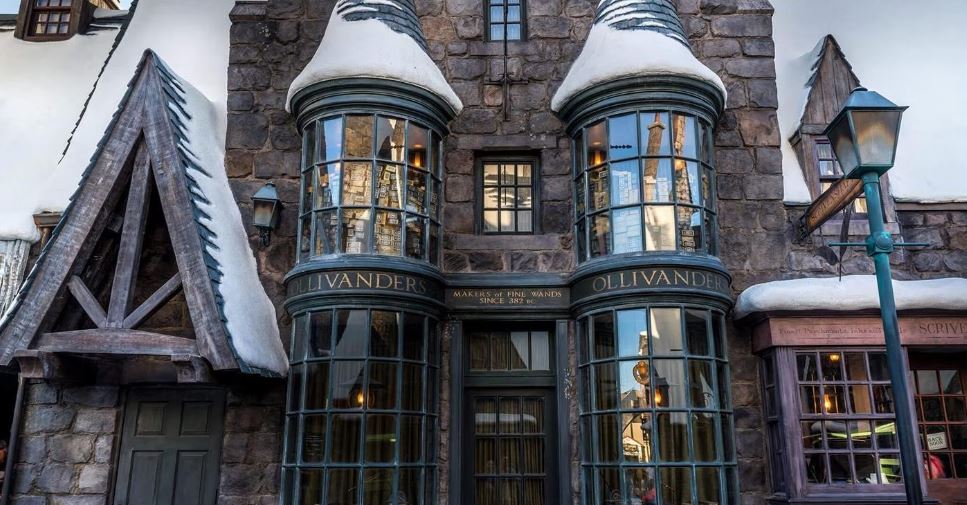 Olivander’s: both a show and a shopping experience. (courtesy Universal Studios Hollywood)

We were split on how to rank the next two, so we’re putting them as a tie. The DreamWorks Theatre took over for Shrek 4-D in 2018, basically so the park could show new non-Shrek 4-d shows. The current show, Kung Fu Panda: The Emperor’s Quest, has been running since it opened. The show makes use of motion seats, projection mapping, and some physical effects like classic Universal water splashes. And it does them all pretty well. 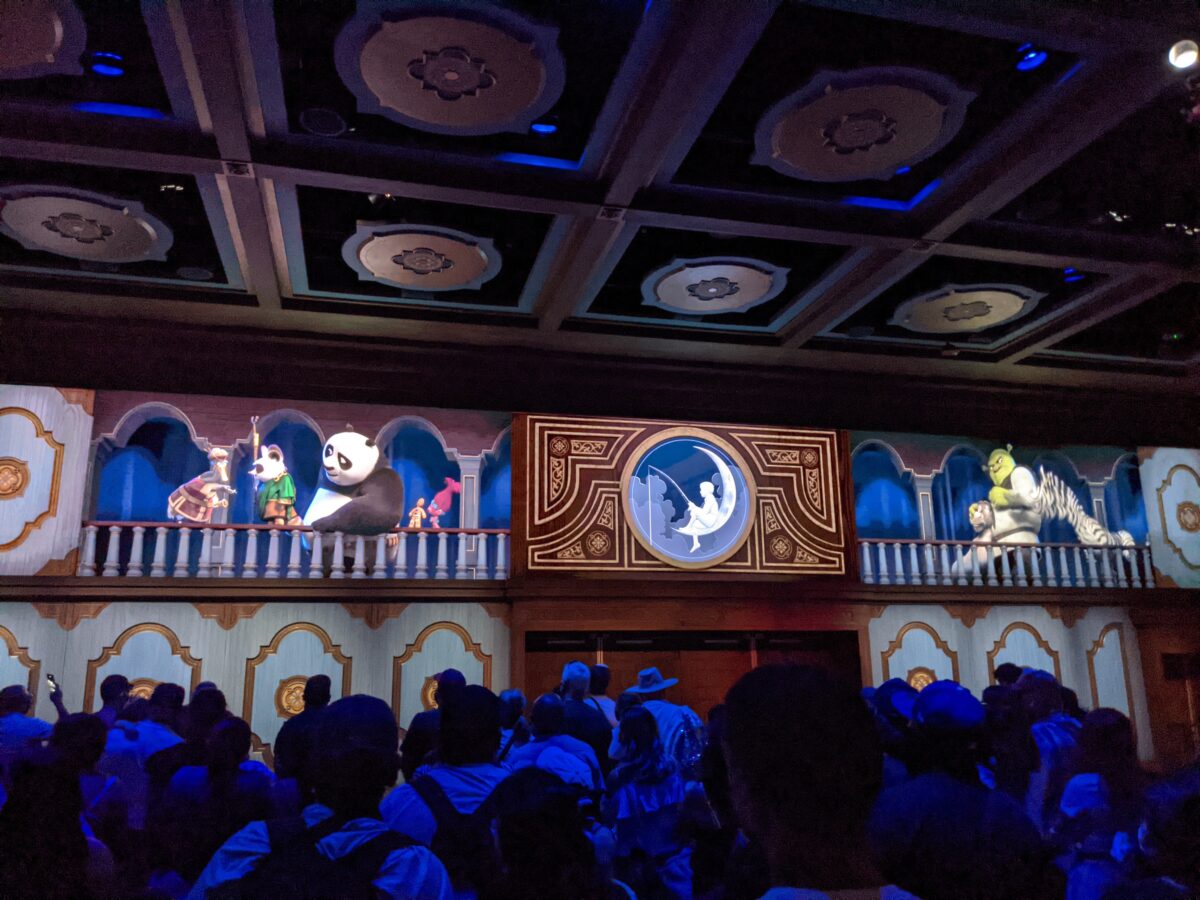 Characters across the DreamWorks library interact with each other, because who cares?

Our favorite part is probably the pre-show, with different Dreamworks characters interacting and arguing with each other. We love the decision to just say “who cares about what world they’re in, we can have Donkey talk to Trolls characters, it’s a theme park.” A good contrast to the self-seriousness of certain other theme parks. It might be 10th on our list, but the theatre is definitely an attraction we go to on every visit.

10 (tie). Flight of the Hippogriff

For those who are prone to motion sickness on Harry Potter and the Forbidden Journey, Flight of the Hippogriff is likely their favorite attraction in Wizarding World of Harry Potter. The coaster is nothing groundbreaking — the Mack Rides Youngstar Coaster model is less than 1,000 feet in length. It’s a perfect stepping stone coaster for thrill seekers in training as they work their way up to a ride on Revenge of the Mummy.

Another motion simulator-type ride, Minion Mayhem was once a 3D attraction but has operating in 2D for the last few years. The ride again combines moving seats and a screen with some other practical effects – like banana smells – for another solid attraction. It’s a little more thrilling than the DreamWorks Theatre, with more of an actual simulator ride feel vs a 4-D theater. The plot is engaging enough, and the show is pretty funny with original actors like Steve Carrell doing a good job on it. Again very kid-friendly, but exciting and entertaining enough to be a good ride for adults. 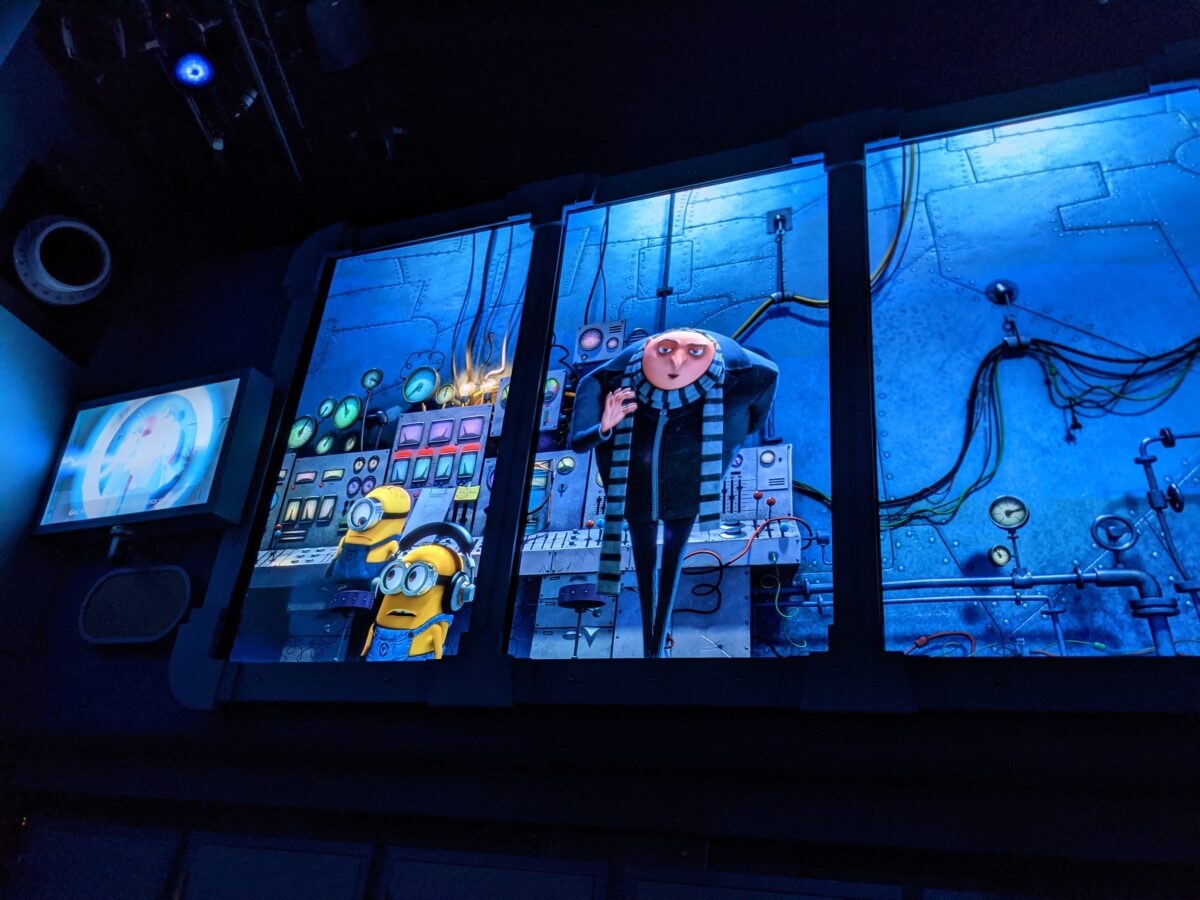 The Pre-show for Minion Mayhem

Another motion simulator, Simpsons took over the Back to the Future ride back in 2008. The queue is quietly one of the most entertaining in the park, with some clips from classic Simpsons episodes, and original Simpsons clips made for the ride – all voiced by the original actors. 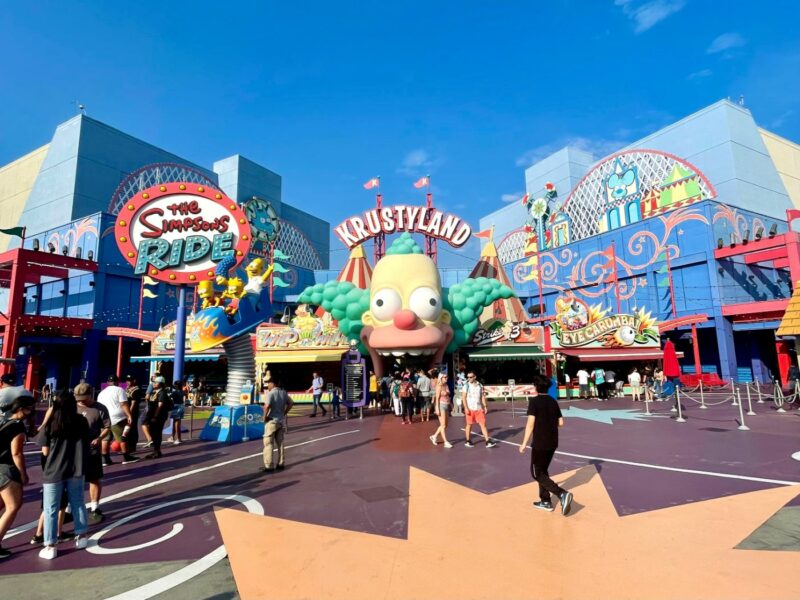 The ride itself is funny and makes good use of the BTTF ride system. Do we wish it were still Back to the Future? Of course! But that doesn’t make it a bad ride at all.

The first of what we’d call the “intense” rides at Universal Studios Hollywood. Transformers uses ride vehicles developed by Oceaneering International, a company that also makes things like undersea robots and space vehicles. So, it’s high-tech, to say the least. 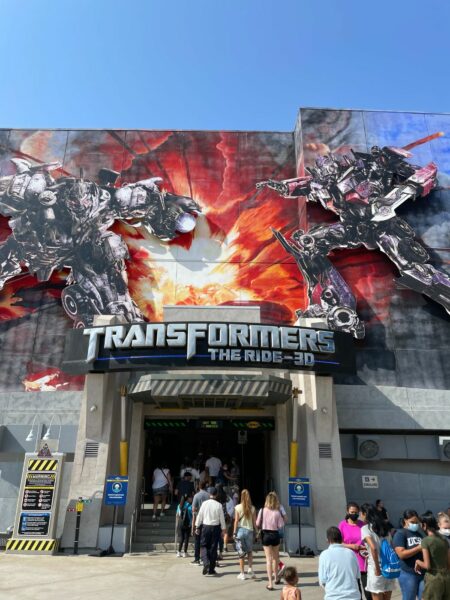 While the vehicles move along the track, they have six degrees of freedom on the platform, allowing them to turn and roll at all angles. This leads to some pretty intense forces as you help the Autobots fight the Decepticons. The ride also has a handful of “4D” effects, like splashes of water, heat, and fog. That combo of forces, high-definition screens, and practical effects make Transformers a very solid ride

6. Revenge of the Mummy: The Ride

While shorter and devoid of a couple of tricks of its Universal Studios Florida counterpart, Revenge of the Mummy: The Ride still packs a punch with an impressive launch and a zippy layout — including a longer backward segment. Its theming is immersive, and the entire ride evokes the fun yet unsettling scenes of the Mummy films. 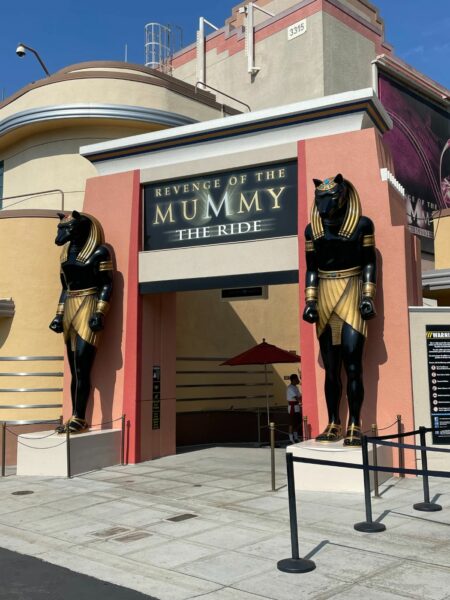 We agreed that the coaster is missing that one thing at the end that would have rounded it out to make it more of a complete ride experience.

For some of us, this is the best attraction at Universal Studios Hollywood. Hilariously themed to a movie that came out over 25 years ago and flopped at the Box Office, the scale of WaterWorld is unlike any other stunt show we’ve seen at a theme park. Filled with trained Hollywood stunt performers (who are always introduced with their long lists of credits at the end of the show), the half-hour show involves jet skis, high dives, water being splashed on the crowd, stage combat, and lots of explosions. 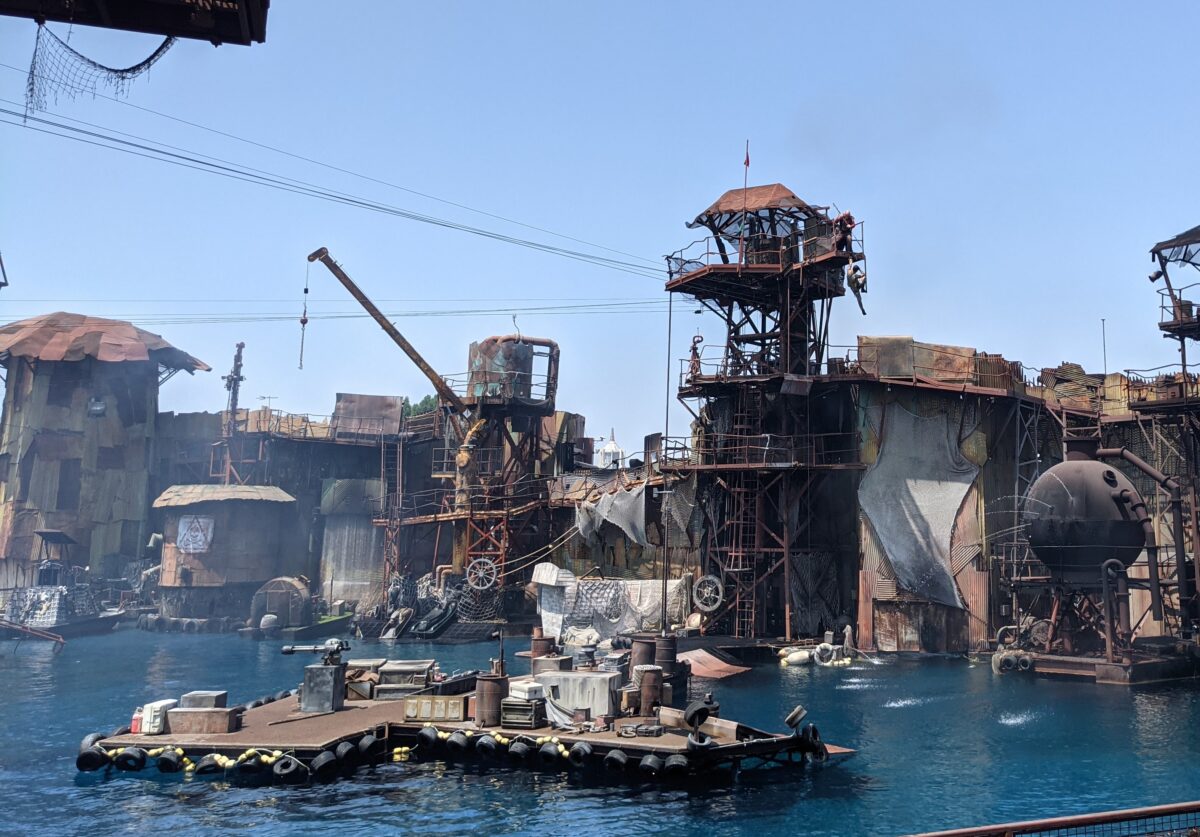 Waterworld: A Live Sea War Spectacular is action packed to say the least.

And while it is impressive throughout the entire spectacular, the final climax is really what blows our minds. When that seaplane (that hasn’t been seen up to that point) crashes through the wall and explodes the audience can’t help but scream. And then it ends with the Deacon lighting on fire before jumping into the pool (plus some more explosions). Amazing! While we have some of the rides ranked above WaterWorld, it really is an “only at Universal” attraction. No surprise that Universal Studios Beijing opened with a whole WaterWorld land!

Getting to see sets from movies like Psycho, Back to the Future, Fast & Furious and War of the Worlds is a highlight enough. Then they throw set-piece attractions like King Kong: 360 3-D, the Flash Flood, and Earthquake. It really makes the Studio Tour an all-in-one attraction, and the chance to see the real Universal Studios, with some theme park magic thrown in.

3. Secret Life of Pets: Off the Leash

The elaborately themed queue of the new-for-2020/2021 (delayed due to the pandemic) Secret Life of Pets: Off the Leash is almost an attraction on its own. Riders are assigned at random a puppy who hasn’t found its home yet. 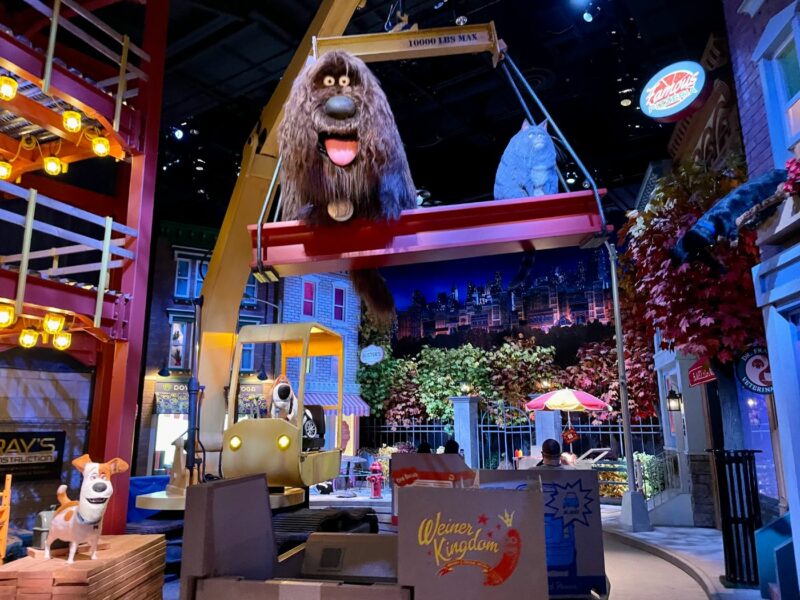 You are taken through the streets of New York City on a journey to your new home. The ride’s use of the optical-enhanced gesture-tracking technology in the strategically (and sporadically!) placed screens makes you feel even more like one of the furry characters of the film franchise. 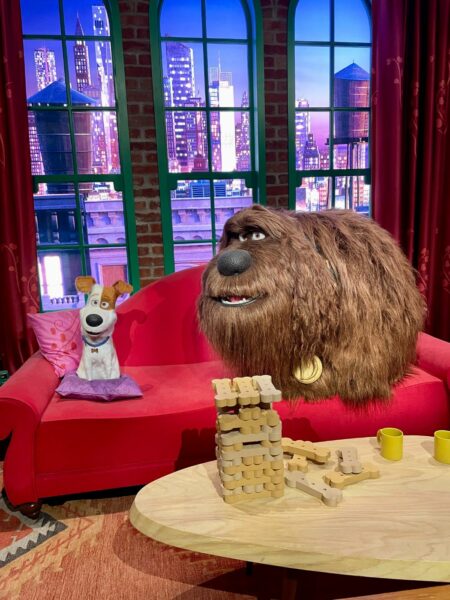 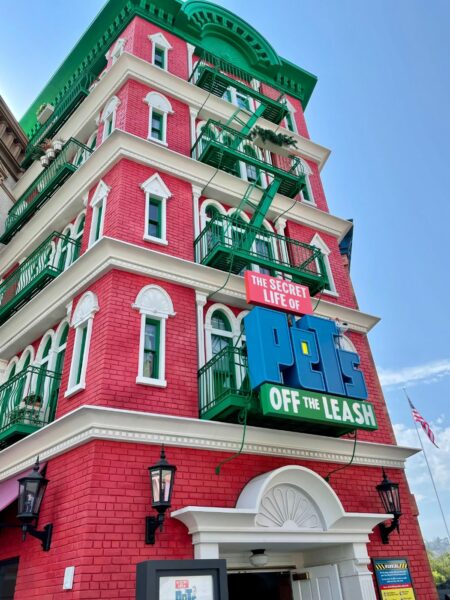 This is quite possibly the cutest theme park attraction ever built.

Jurassic Park: The Ride has been one of our favorite attractions ever since it opened in 1996. It had some of the most impressive animatronics on any ride for a long time, and the T-Rex at the end still kind of scared us. But when it closed for an update to Jurassic World: The Ride in 2018 it definitely needed some love to clean up damaged robots and dated sets. 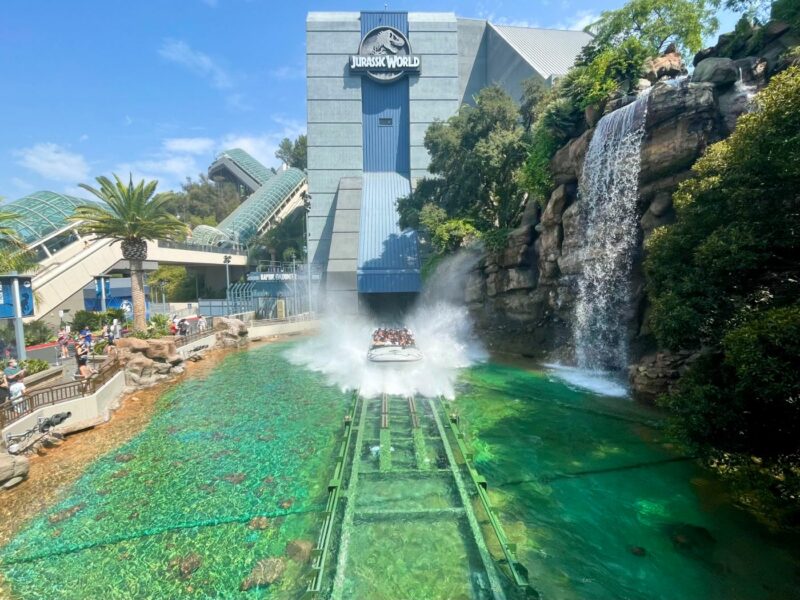 The updated ride kept mostly the same layout, with one new screen section added to the beginning that actually works pretty well. It also added even more impressive animatronic dinosaurs throughout the ride. And yes, something still goes wrong for your boat that leads to some exciting encounters with big scary dinos. The refreshed Jurassic World keeps it as one of the most exciting water rides out there, with some of the best animatronics in theme parks.

1. Harry Potter and the Forbidden Journey

Even after 6 years, Harry Potter and the Forbidden Journey is still so good. Kuka-arm attractions like this remain a rare unique experience, and Forbidden Journey just does it so well. The physical experience of being flipped around on the robot arm is just so good. Plus, the screens and footage have been updated enough that despite being old (and the cast looking like little kids), they look good enough. 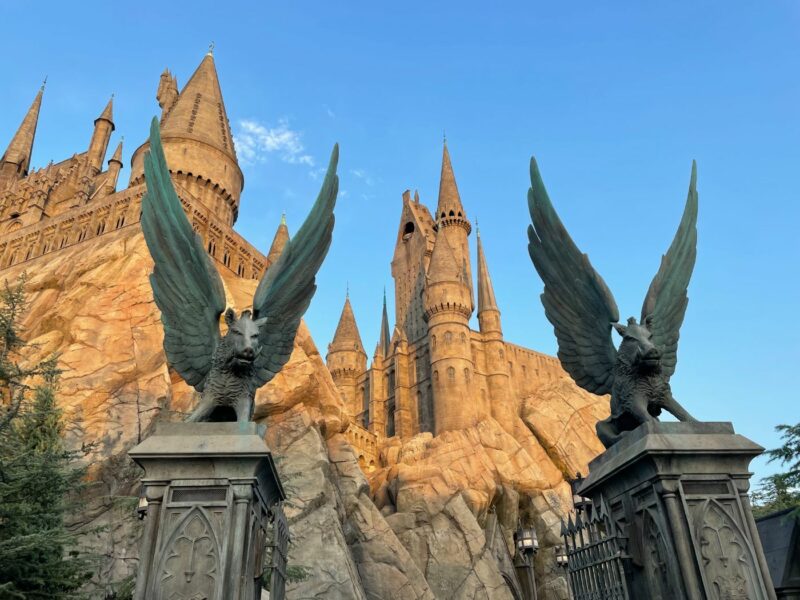 But the practical effects seen on Forbidden Journey are what really make it amazing. The dragon blasting you with steam, the giant spider, the whomping willows, and the Dementors are all still incredible in scale, and terrifying. Plus it has such  a great queue and Hogwarts looks so good from the outside. While not as unique to Universal Studios Hollywood as some of the other attractions since Forbidden Journey is at almost all Universal Studios parks, it’s just too dang impressive for us to not put it at #1

How would you rank your favorite Universal Studios Hollywood attractions? Let us know in the comments section below, or yell at us on Twitter, Instagram, or Facebook!