The biggest debate inside of the coaster community, outside of whether to classify RMC’s topper track as a wood or steel coaster, is what counts as a roller coaster credit? Counting the number of coasters you’ve conquered is one of the first steps from casual to hardcore roller coaster enthusiast. We’ve even created out own Excel spreadsheet template to keep track of your coaster count, but the question always comes back to: what counts as a coaster credit?

The definition of a roller coaster is not always as simple as it seems. And what about rides that are relocated? Coasters that are re-tracked? We decided to have a round table discussion to hear each others opinions about what should count as a coaster credit. Below is a state about whether a ride counts as a credit and whether we each agree or disagree. Read our thoughts then share yours in the comments below!

The Incredible Hulk redo where all the track was replaced and it’s essentially a brand new roller coaster does NOT count as a new credit: agree or disagree? 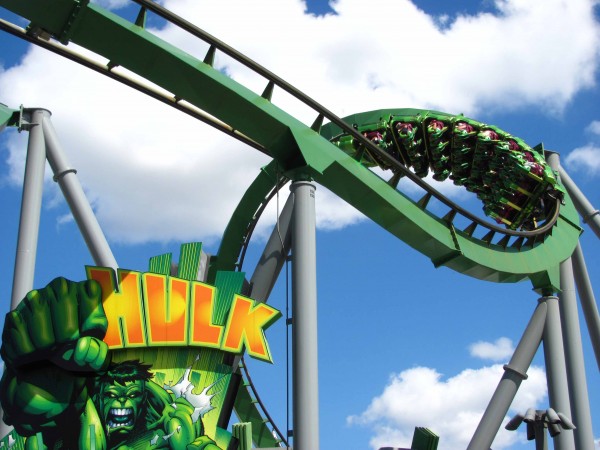 Andrew: Disagree. I think it should be a new credit. I think if you count coaster clones (i.e. Batman: The Ride B&Ms and Joker S&S Freespins) in your personal coaster count, you have to count Hulk 2.0 as well. It’s essentially a cloned layout with the new track, but happens to exist on the exact footprint of the coaster it cloned, rather than at another park somewhere else in the world. (And I’m not just saying that because I’ve ridden it and it gives me a “found” credit that I was previously unaware of.)

Eric: I’m going to preface this by saying I don’t really care about or count my coaster credits (I know, heresy). I’ve also never been on either version of Incredible Hulk. Basically, I’m super unqualified to answer this. That said, I think this is close. My inclination is to say it DOES NOT count as a new credit. Yeah, the launch is upgraded, and the track is replaced, but the layout is identical. Is this that much different than a retracked wooden coaster?

John: As a semi-serious coaster credit counter having ridden both the “old” and “new” tracks, I did not count the retracked Hulk as a new credit. I don’t count retracked wooden coasters as new credits. The new track is typically added in certain segments, and it’s still largely the same ride experience, albeit a smoother one. I applied the same logic to Hulk.

Nick: This is a tough one to start out with! On one hand, it IS essentially a completely new roller coaster. But on the other it’s the exact same layout in the exact same location. I think I’m also going to have to say AGREE, this is NOT a new credit.

Zamperla Disk’o rides, like Pipe Scream at Cedar Point, are NOT roller coasters. Agree or disagree?

Andrew: I think Disk’o’s, while a great ride, aren’t technically coasters. I’ll call it a flat ride. It’s similar to the motion of a Frisbee, just on a track instead of an overhead pendulum.

John: Agree. These are not coasters. And that works in my favor, as I don’t like spinning. So there’s no temptation to suffer through a ride for the credit.

Nick: I had the same thought here, I’ve always thought of them as flat rides. But does the ride ever run on gravity, even for a few seconds? If so, then I think we have to apply the same logic as the Skyline Skywarp models (more on this later) and count them as coasters.

Rougarou at Cedar Point and Patriot at California’s Great America should count as new credits. Agree or disagree? 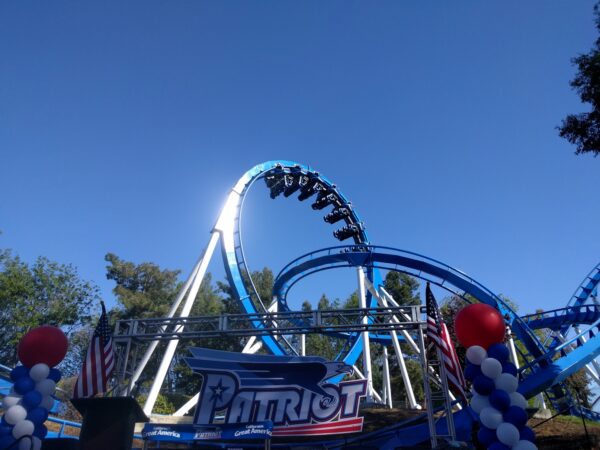 Andrew: I’m on the fence here. There are definitely differences in the ride experience between a stand-up and floorless coaster, but I don’t think new trains can make for an entirely new coaster credit. I’ve ridden Mantis, and I’ll ride Rougarou hopefully on my next visit to Cedar Point. I never rode Patriot when it was Vortex at California’s Great America, so that one’s a bit of a moot point, anyway.

Eric: Nope, also not a new coaster. It’s the same track. Experience is slightly different, but again, I think of this as more like a re-tracked wooden coaster or like “New Revolution” getting new trains with different restraints. The coaster is improved, but it’s not brand new.

John: I say no. Again, I default to my wooden coaster logic. If a wooden coaster receives the train of a removed coaster (e.g. Great American Scream Machine at Six Flags over Georgia receiving the former Georgia Cyclone trains), I wouldn’t consider that to be a drastically different ride experience. And of course, the layout is exactly the same.

Nick: I think it all comes down to what Andrew alluded to: are we counting credits based on the coaster’s track or the rider experience? If you’re counting rider experiences, then it’s definitely new. If you’re going by the track, well, same track, same location, no new credit.

Timber Wolf at Worlds of Fun will have a new finale in 2018  but is NOT a new credit. Agree or disagree? 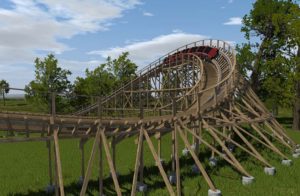 Andrew: Wooden coasters get re-tracked all the time. Unless the entire track is changed, then I’m not counting this as a “new” credit. But like John, I’ve never ridden this, so for me, it will be a new credit regardless. (Hoping to get to Worlds of Fun later this year, though!)

Eric: John and I see to have been on the same page for wooden coaster retracking being our guide for most of this. This is more complicated, but I’m still leaning towards not counting it. A line needs to be drawn somewhere, right? I wouldn’t count GhostRider as new after the reprofiling work it received, or Legend as new after it’s layout was modified. Are pre and post-loop Son of Beast different? I think not. Sadly Timber Wolf won’t be a new credit. Of course, all these GCI refurbs have made coasters much better, so I don’t want to discourage people riding them.

John: The line between credit/no credit is blurry here for me. I’ve never ridden Timber Wolf, so thankfully I won’t find myself in this predicament. Considering that the coaster’s track length will be shortened, I likely would not count this as a new credit.

Nick: Yeah, percentage wise they’re changing what, like less than 10% of the coasters layout? I guess for me you would have to change more than like 60% of the layout in order for me to consider it a new credit. So I agree, not a new credit. 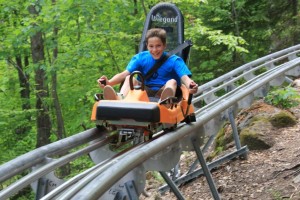 Nick: Totally agree and so does RCDB. The only thing that makes them slightly different from your standard roller coaster is the passenger’s ability to influence the max speed of the ride by using the manual brake handles.

Eric: Agree, definitely coasters. Vehicle coasts freely on rails down a hill. It’s basically the definition of a coaster.

Andrew: Agreed. See Eric’s answer. That’s what I would have said, although I would have stumbled to try to make it make as much sense as he did.

John: Technically, yes. But I don’t count them. I’ve only been on one, so that’s no huge loss for me.

Larson loops are NOT coasters: Agree or disagree?

Andrew: As hard as Six Flags tries to convince me otherwise, these are not coasters. Never will be.

Eric: Yeah, definitely not coasters. They’re driven the whole time. It’s more like a Pirate Ship than a roller coaster.

Nick: Again, technically if there is moment where they run on pure gravity then maybe they should be a coaster. But nah, I personally will never refer to them as roller coasters.

Skyline Attractions’ Skywarp ride IS a roller coaster and counts as a coaster credit. Agree or disagree? 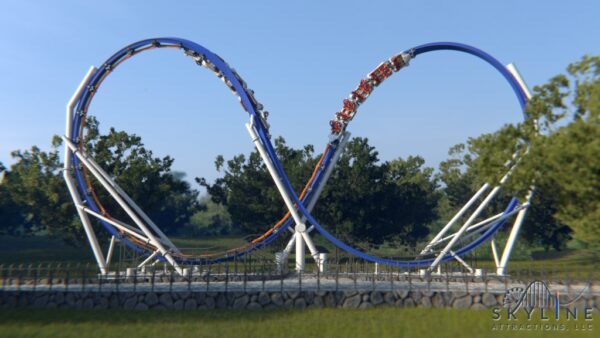 Andrew: I’ll defer to this tweet from Skyline during IAAPA. Duane and Arthur are both experts in the industry, and if they’re convinced its a coaster, its a coaster.

We just had a good conversation with Duane from @rcdbdotcom and Arthur from @USATODAY and ended the debate. Here is the result: https://t.co/s2rTNgwaZA

Eric: This is on the edge, but Skyline told us they actually coast a little bit, and are not fully driven. I think that makes them a coaster, plus the like wheel design and potential for a LIM launch make them even more coaster-like. It’s probably as close to not being a coaster as a coaster can be, though.

John: I’m on the fence about this one too. I think seeing it in action may help me make a decision. I doubt I’ll ride one in the near future, so I’ll likely just cross that bridge once I come to it.

Eric: Gotta get you out to the West Coast, John!

Do you agree or disagree with any of us about what counts as a roller coaster credit? Let us know in the comments below!