NOTE: We will continue to update this post as more updates come in! Scroll to the bottom for the latest updates!

Attention Carowinds‘ passengers, we hope you didn’t miss the final boarding call for three attractions in the Crossroads area of the park – Southern Star, Plants vs. Zombies Garden Warfare 3Z Arena, and Yo-Yo. Over the weekend, the park announced a “final call” for the three attractions, and in doing so, might have dropped a hint for the future of that particular area of the park.

🔉 ATTENTION PASSENGERS: This is the final call for Plants vs. Zombies 3Z Arena, Southern Star and YoYo. #Carowinds pic.twitter.com/SlOGCRKEN2

In the short video, posted on Carowinds’ Facebook and Twitter accounts, the traditional “two dings” that accompany an announcement above a commercial aircraft kick off the video, where a stewardess then gives the announcement that it’s the “final call” for the three attractions. The video ends with the sound of a plane taking off.

The three attractions have varying levels of history at the park. 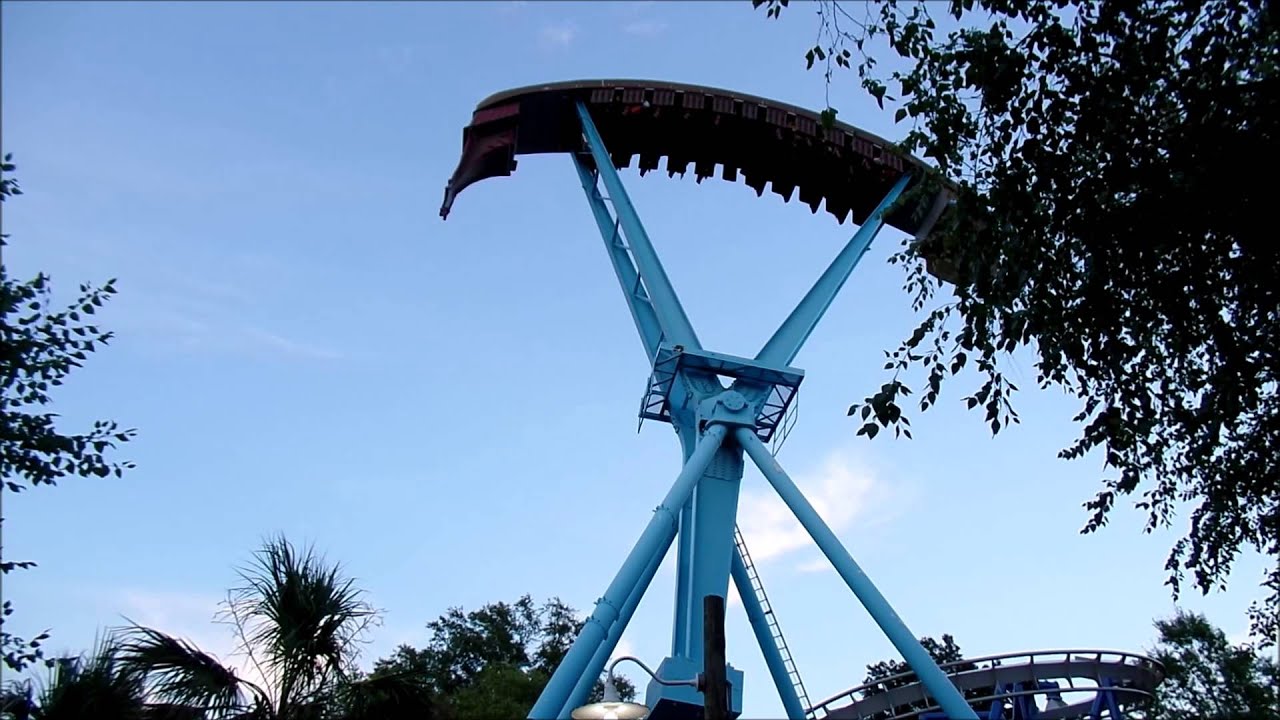 The attraction on the chopping block that has been at Carowinds the longest is Southern Star, originally known as Frenzoid, which opened at the park in 1986. The looping Viking ship from Intamin was originally located slightly to the west of its current location, and was removed in 2005 for the expansion of Carowinds’ water park, then known as Boomerang Bay, before getting a new name (Southern Star) and location, reopening in 2007. 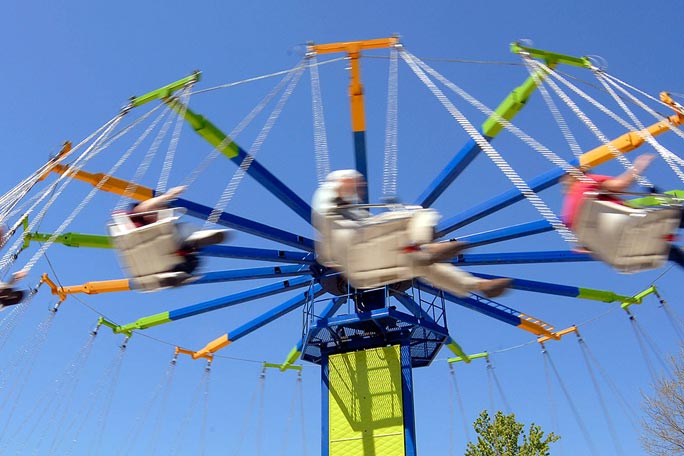 Yo-Yo, a swinging ride from Chance Rides, opened at Carowinds in 2008 after coming to the park from Geauga Lake. It operates on the former location of Whirling Dervish, a Wave Swinger, which was removed following the 2000 season. An attraction, Flight School, operated in the space in the early 2000s. 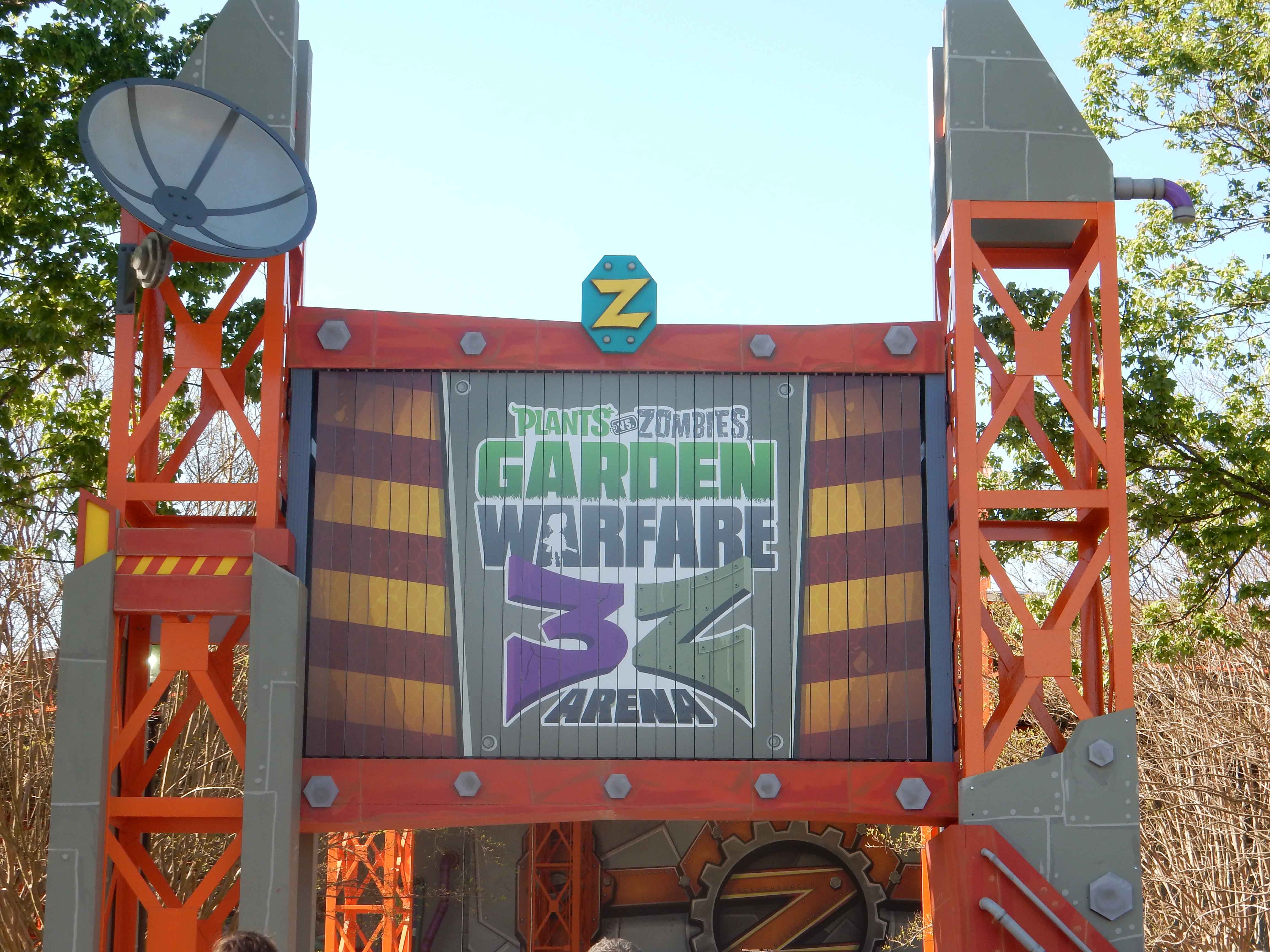 The “newest” attraction that has been given “last call,” is Plants vs. Zombies Garden Warfare 3Z Arena. An interactive attraction from Alterface, Plants vs. Zombies opened in 2016, and was the “dry” side of Carowinds’ addition that year while Boomerang Bay was expanded again and renamed Carolina Harbor. Previously, the building was host to the Carowinds’ Action Theater, and featured motion-base films including the NASCAR-centric “Days of Thunder,” James Bond 007: A License To Thrill, and Spongebob Squarepants 4D.

Edit: As of August 1, 2022, all of these attractions are indeed closed for good, and have been walled off.

While many people think that Crossroads at Carowinds is just the area beyond Chick-Fil-A and Boo Blasters on Boo Hill, the area actually stretches all the way to (and includes) Windseeker. The below map is a loose representation of the different areas at Carowinds — the pink section is Blue Ridge Junction, Green (extended up) is Crossroads, Blue is Camp Snoopy, and the red area is the former Dinosaurs Alive attraction. 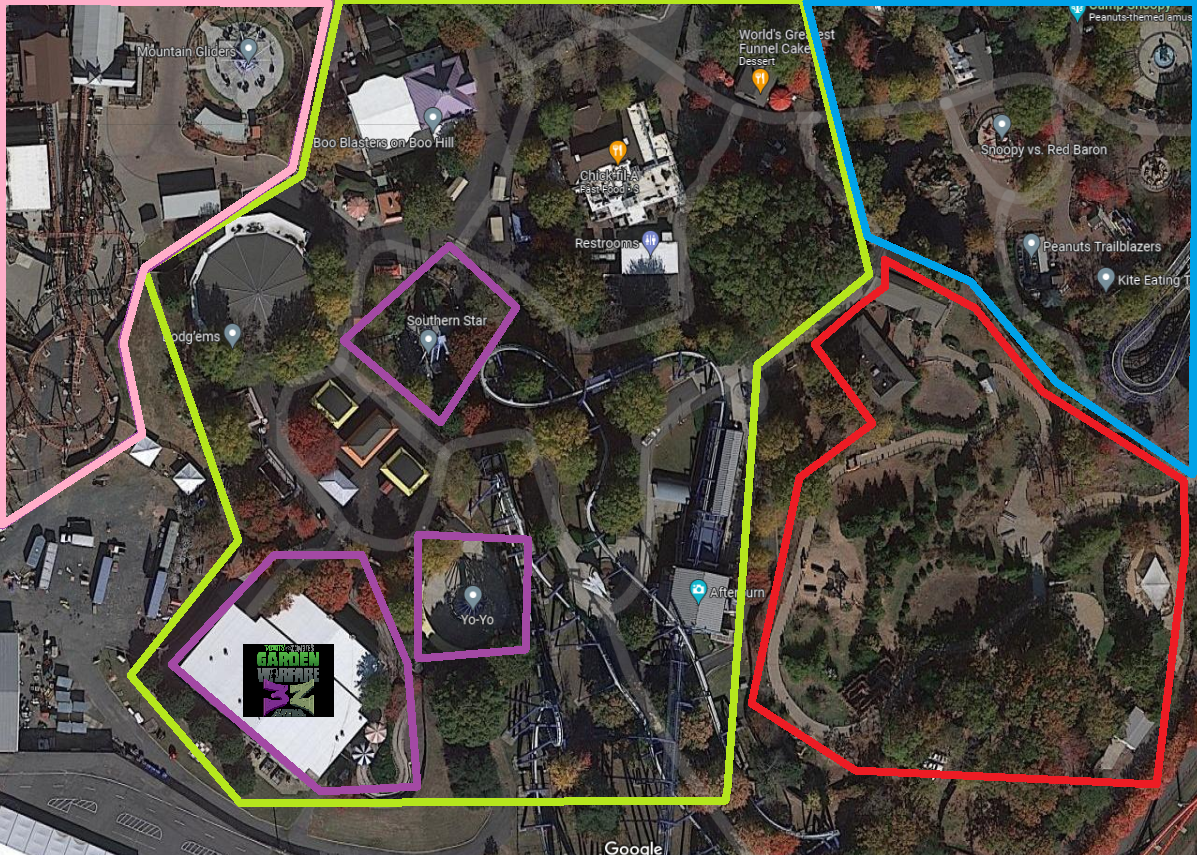 The purple boxes are the three closed attractions When you include the four games buildings located between the three attractions, it presents a good sized plot of land for expansion or changes that could come to Carowinds.

But what will it be?

With the teaser video featuring a stewardess (flight attendant) and aircraft noises, it feels like a safe bet that there’s going to be a level of aviation theming involved. This would actually make a ton of sense for Carowinds, a park that leans into its Carolina history at every turn. From clever attraction names inside of Carolina Harbor and Carowinds that are either pun-based or tie into state landmarks (Myrtle Turtle Beach, Kiddie Hawk Cove, Blackbeard’s Revenge, Kiddy Hawk, etc.) to events like the State Line Celebration and Great Carolina Fest, Carowinds loves its moniker as “the place where the Carolinas come together.” 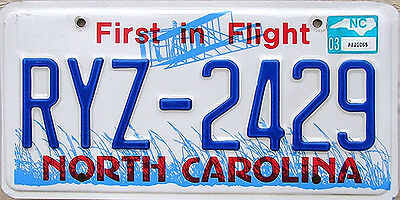 Ask anyone not from the state of Ohio about the history of flight in North Carolina. When it comes to aviation, North Carolina takes great pride in their “First in Flight” status. (North Carolinian here. It’s even on our license plates!) The Wright Brothers’ first flight took place on the shores of the Outer Banks in Kitty Hawk (which is already the namesake for two attractions at Carowinds – the Vekoma Family Coaster Kiddy Hawk, and Kiddy Hawk Cove, the family water play area inside of Carolina Harbor). It would make a ton of sense for Carowinds to lean into this bit of Carolinas history for future expansion. Plus, given the adjacent proximity to the Fighter Jet-themed “Afterburn,” the new attractions would already have another aviation-themed anchor attraction in the area.

Ironically, this theme might have been right under our nose for years. In early 2020, pre-COVID, Carowinds sent out a survey to ask park guests for opinions on future park expansion. You: What survey? Us: Lucky for you, we detailed the whole thing here. 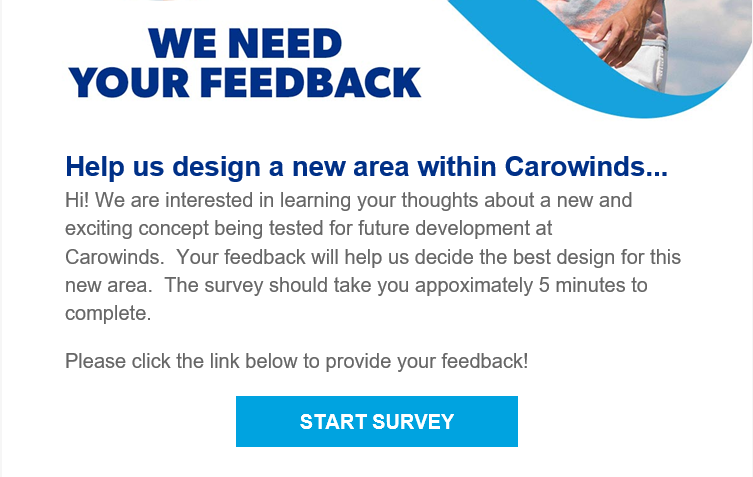 In the survey, the concept of an area known as “The Aviation Village” was proposed against an area known as “Art Meets Industry.” The former was described by the park as “Filled with the spirit of invention, exploration, and aviation, YOU can now take part in this land all about the history of flight. Experience playful bravery of aviators and the inventors old, new, and fantasy to show others you have what it takes to become the next hero of adventure. Engage with rides and destinations inspired by the works of DaVinci, the Wright Brothers, post war era, and the fantastical world of Dieselpunk.”

It certainly seems like “The Aviation Village” has the potential of coming to life, especially if a cluster of attractions in close proximity have received their “final boarding call.”

Our best guess for attractions? If you’re looking for a major coaster, we have news for you. This addition is almost certainly not going to be the next record-breaking roller coaster at Carowinds. Let’s take a look at the past major captial expansions for Carowinds in the past decade.

I think there’s a bit of a cyclical pattern here – there’s a new coaster every 4-5 years, and in between, there’s improvements to areas of “Family Thrills,” “Kids & Family” attractions, Water Park, Entertainment, and Infastructure. If we’re going to repeat 2015-2017, there was a roller coaster, water park addition, and then family thrills with County Fair. In 2019, the park debuted Copperhead Strike, 2020/1 was Boogie Board Racer, which means our prediction for the next addition will be “Family Thrills.” (Especially given proximity to Camp Snoopy, which would be a little redundant to add more “kids” attractions to this area.)

There’s a lot of space in this area, especially if you remove the games. There’s definitely room for 2-3 new attractions. But we’re going to wait from any official teases from the park before speculating for the types of attractions that could take the place of Plants vs. Zombies, Yo-Yo, and Southern Star! Stand by for any further final call announcements!

According to Carowinds Fans Only, posters have appeared on the construction fence, lending further weight to the “Aviation Village” theory. Of the two posters posted, the first depicts a blimp/dirigible of some type, very common in the steampunk/dieselpunk motif. The words “The Fantasy of Flight Comes to Life” are underneath it, along with “Exploration begins with a Golden Ticket.”

Honestly, it reminds me a lot of the former Led Zeppelin: The Ride/The Time Machine station at Hard Rock Park/Freestyle Music Park. 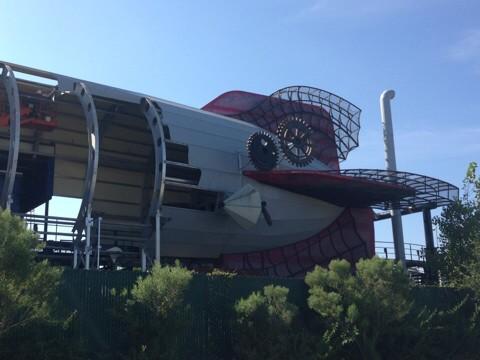 The second poster depicts another aircraft with the captions “Setting the stage for curiosity to soar” and “come fly the Carolina skies.”

Both posters feature a date of August 11, so fortunately, we won’t have to wait long to learn what Carowinds has up their sleeves!