In June 2022, LEGO unveiled their second official roller coaster set and the first to go upside down: The LEGO Loop Coaster. Initially, I wasn’t too impressed and was fixated on how much energy the cars lose in such a short time. But after my son and I saw one operating in person at our local LEGO store and getting to see the complexity of the vertical lift up close, we knew we had to have one. We missed out on LEGO’s first official roller coaster, a colossal 4,124 piece set that very closely simulated a real-life working roller coaster and is now retired. Luckily, Santa (or Mrs. Claus) was good to us and delivered the Loop Coaster for Christmas.

I’m sure there have been hundreds of LEGO Loop Coaster reviews written by now, so instead of simply writing a review, I wanted to compare it to a competitor and predecessor. CDX Blocks, a LEGO compatible building system, actually came out with their own looping roller coaster building set more than two years before LEGO.  Which looping roller coaster set is better? Which one should you buy? Let me break down what I like and dislike about each one.

First, I think it’s interesting to look at the design of each and see how they mimic real roller coasters. The biggest difference between the LEGO Loop Coaster and the CDX Blocks Sidewinder (besides cost) is the track. LEGO uses a small variety of pre-built track pieces, like building a RollerCoaster Tycoon coaster in real life. On the other hand, CDX uses flexible rails that can be twisted into any shape you can imagine, more like if you were playing NoLimits coaster. 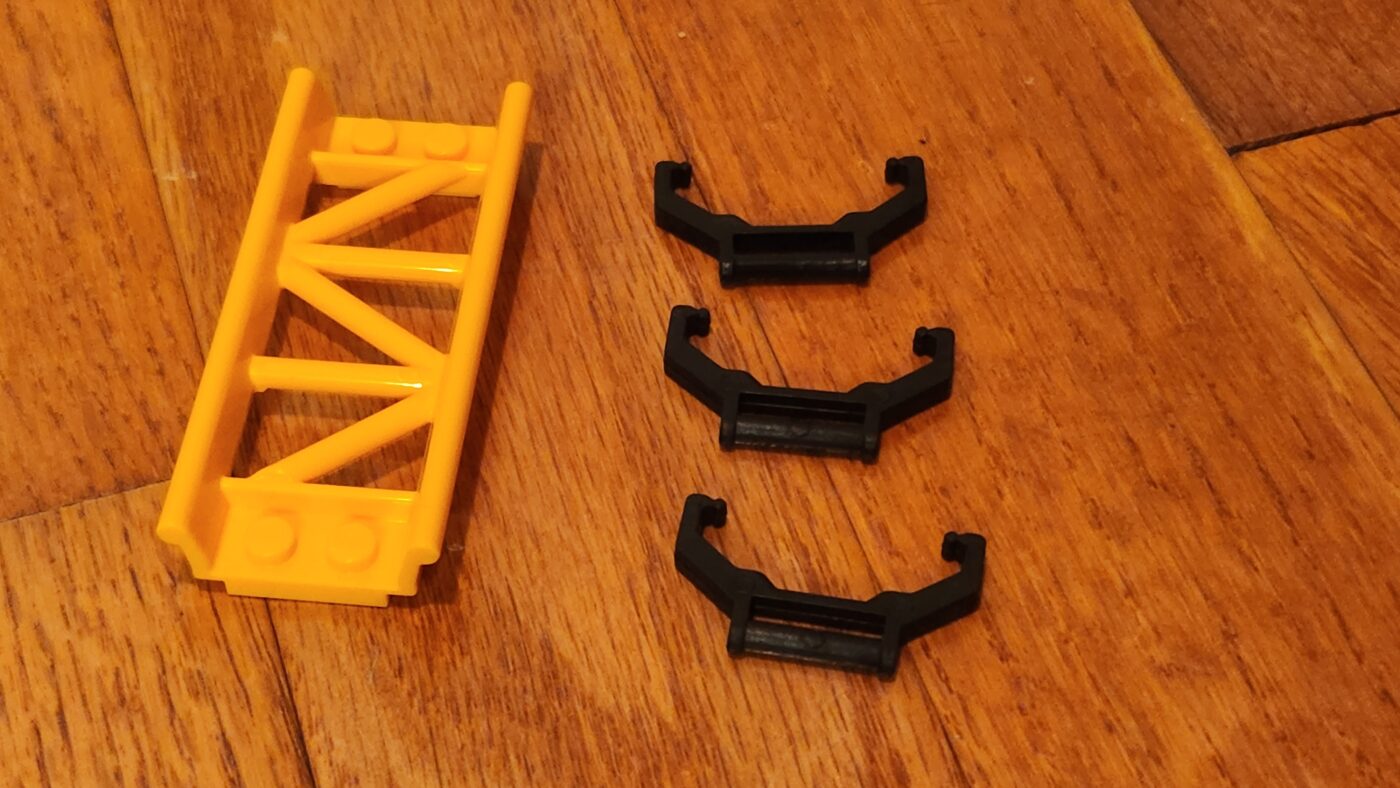 A LEGO track section left and CDX Blocks cross-ties on the right.

The CDX track uses a tie and rail arrangement similar to an older Arrow or Vekoma with the wheels on the inside, while the LEGO coaster uses the more modern Vekoma or B&M approach of wheels on the outside of the rails. 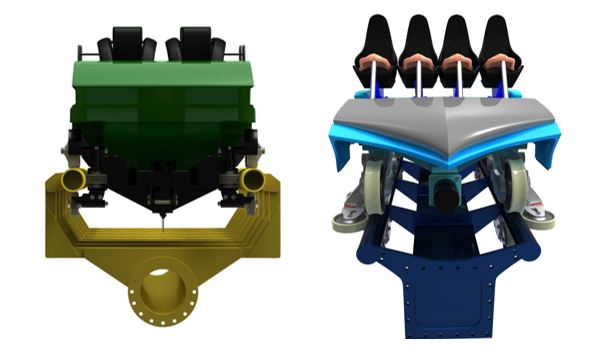 The LEGO vehicles only have flanged road wheels. They use the plastic sides of the vehicle as the method to lock it to the track. This makes the design of the cars very simple but not very energy efficient when it comes to loops or tight radii. The CDX cars have two sets of wheels, but the bottom set is chamfered such that it acts as both side friction and upstop wheels. They’re also made of metal which seems like it should have a lower rolling resistance than plastic. 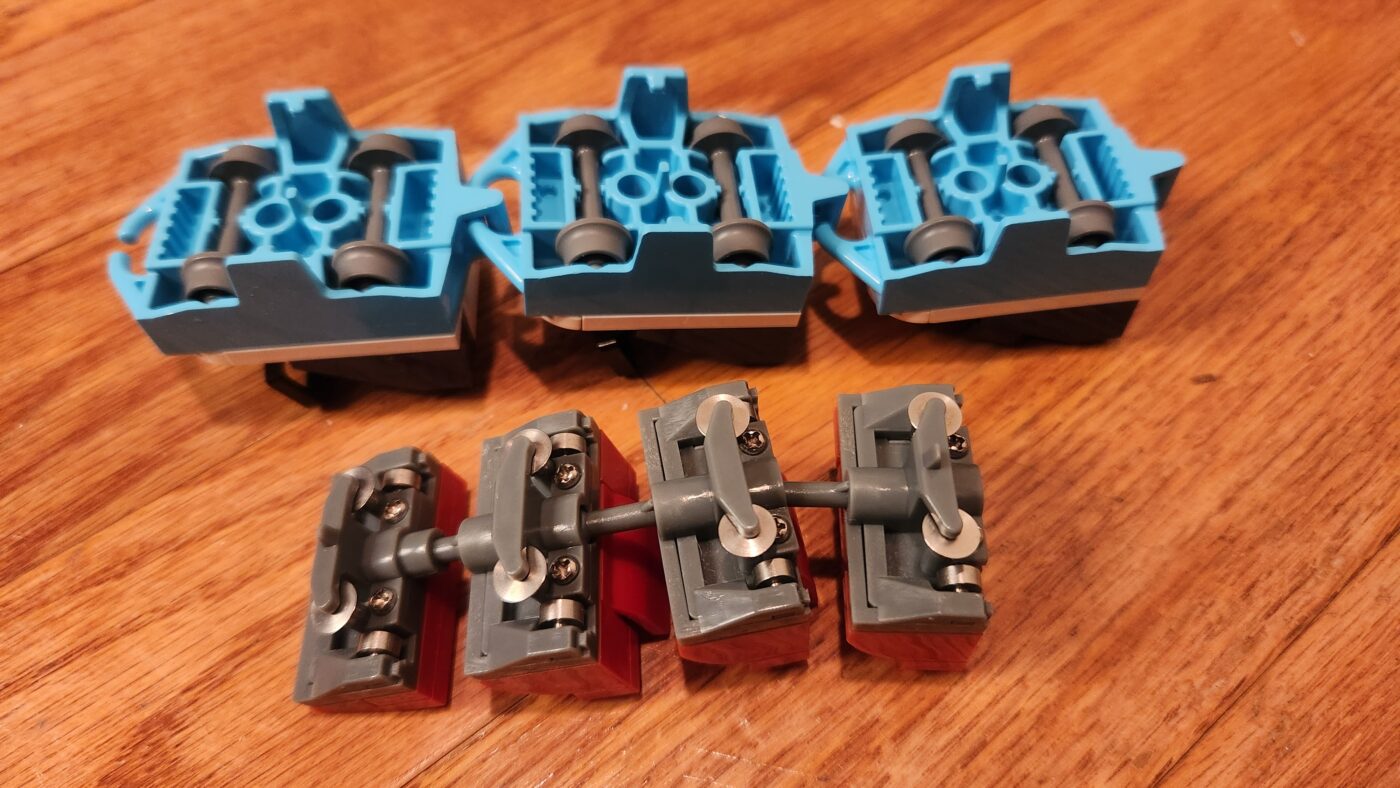 The LEGO design has two axles per vehicle, like a PTC train, while the CDX has one set of wheels per car (essentially a single axle), like a GCI Millennium Flyer train. Meaning, the CDX trains can more smoothly negotiate tighter curves while the LEGO train is more likely to shuffle around turns and not steer as easily. The CDX cars also have a ball-and-socket connection that I think holds them together quite well. Both trains allow for some theming or lap bar restraints to be added. 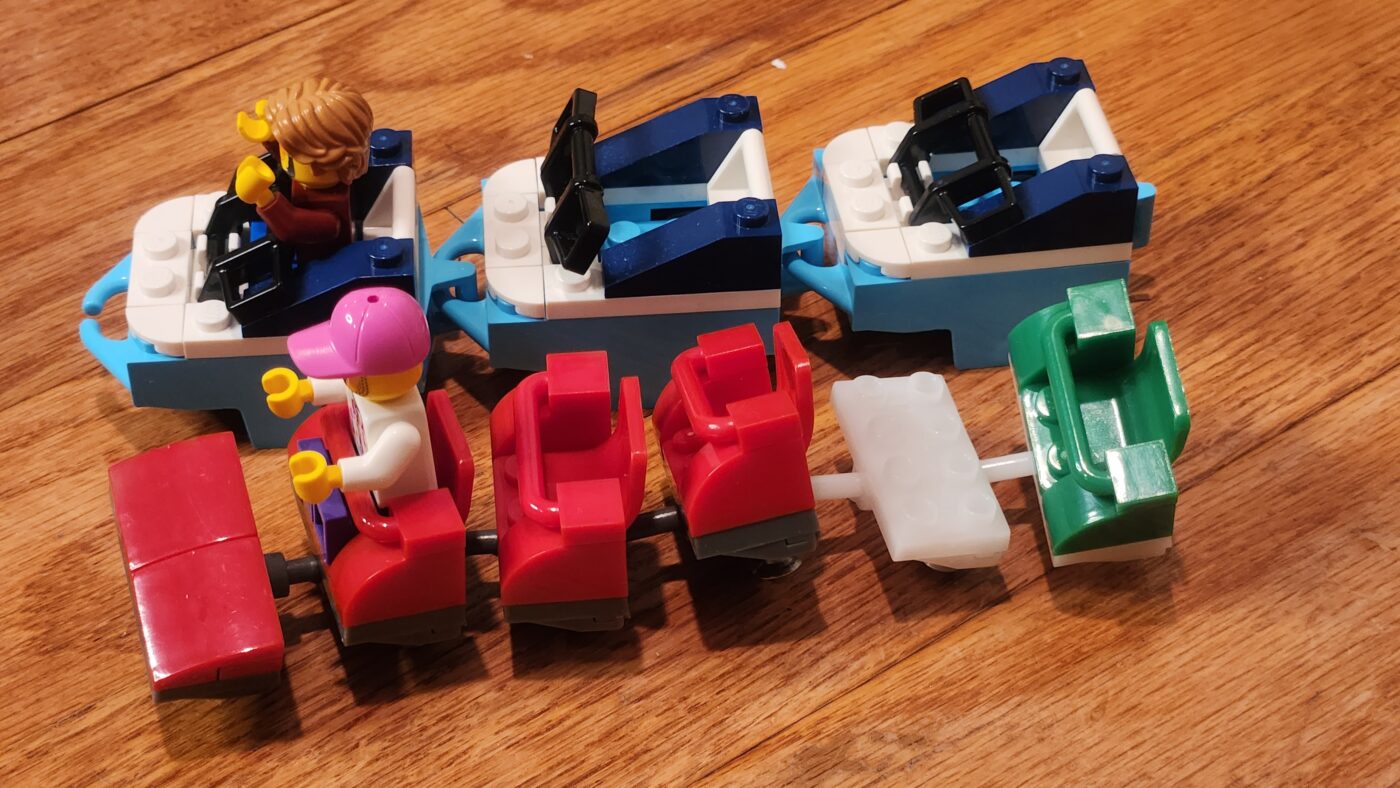 You can fit double the number of passengers in the same length in a CDX train versus LEGO.

The Sidewinder sits on realistic looking footers for each individual support column. However, all the supports are straight, vertical lines. The LEGO Loop uses more of a lattice-style foundation like seen on the Zamperla wild mouse/spinning coasters. There’s also some triangular shaped support columns at angles to add to the layers of realism. 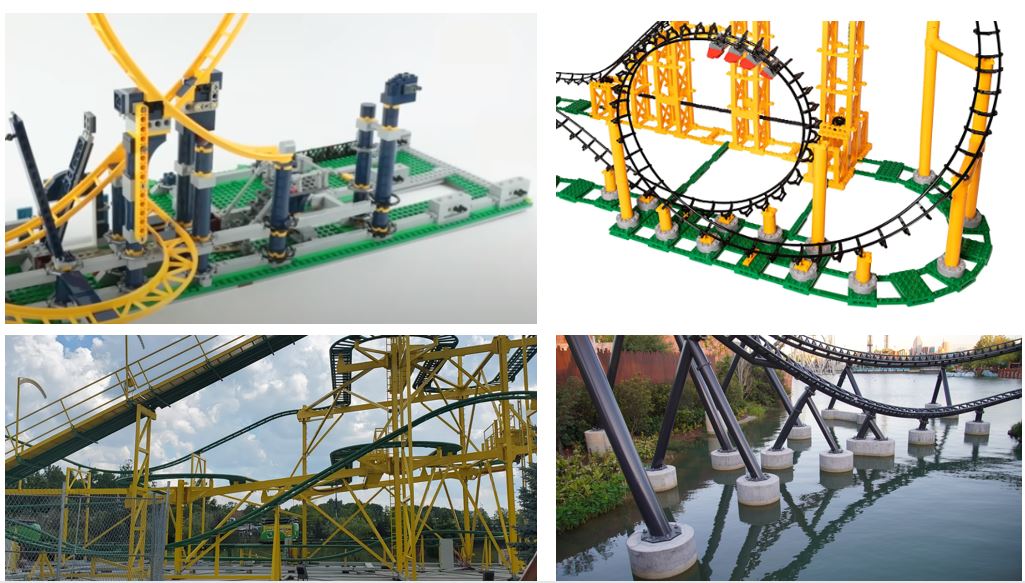 Neither set comes with a motor but you can buy one from Amazon and easily power up your coaster creations.

Let’s start with the pros: building this set with my son was one of the most fun LEGO builds I’ve ever had. Honestly, I felt like a kid again and was giddy the whole time we were building it. We were both excited to see it come together piece-by-piece. There are multiple different building techniques to keep you engaged and the attention to detail is incredible. It’s a real win having track installed relatively early in the building stage so you can get a taste of it running without having to wait too long. 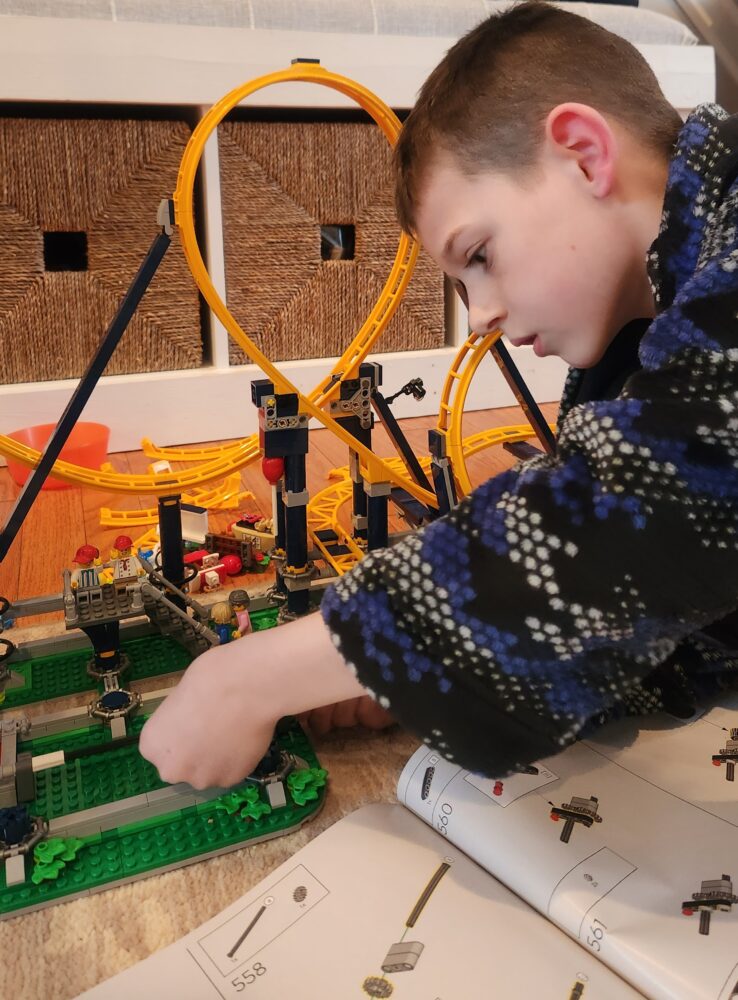 How long does it take to build the LEGO Loop Coaster? Between an adult and a 9 year old, from the time we started building to the time it was finished was about 26 hours, how much of that was spent on building I am not sure, probably somewhere between 6 and 10 hours. Our fingers were definitely sore. 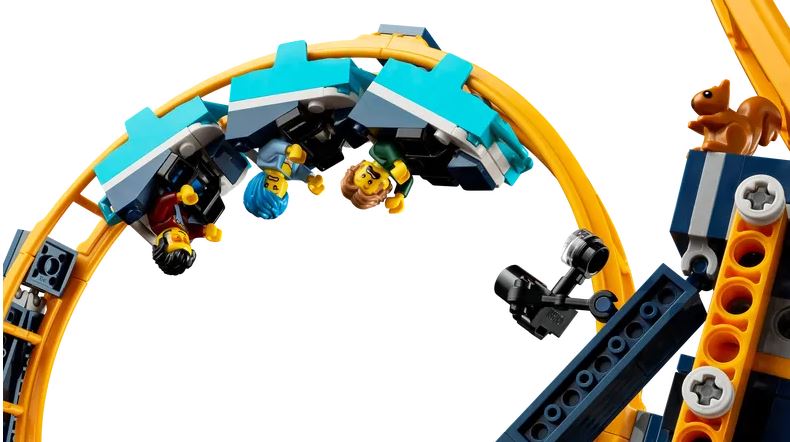 Loop Coaster comes with 11 mini-figures and a squirrel. You gotta love the personality and that classic LEGO humor. The safety sign for the ride says no hats, balloons, hot dogs, or squirrels – all tied into elements of the set. 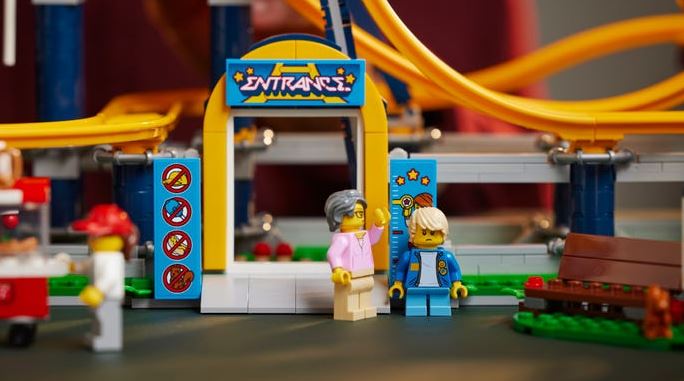 When the Loop Coaster was first unveiled, I was a little skeptical of it. But after building it, I can say this thing is a marvel. The elevator lift system is ingenious. I’m truly impressed by the lift platform not being directly connected to the chain. The engineer in me really appreciates all the clever design aspects, how it’s both complex and simple at the same time. 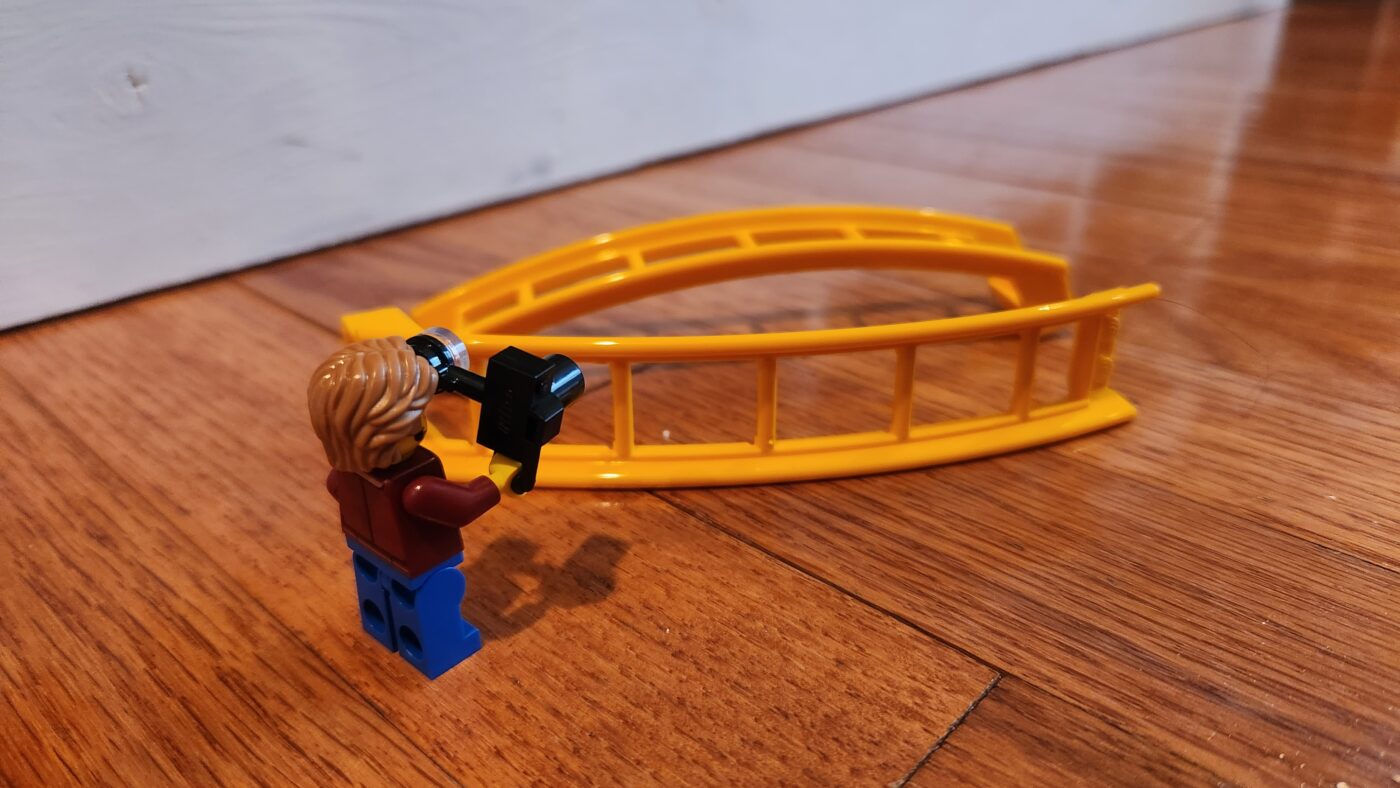 I think that’s Midway Mayhem scoping out the construction…

The biggest con of the LEGO Loop Coaster is the cost. It’s expensive. If anyone asks, ours was made by Christmas magic, but I’m told the upfront cost (with shipping) is $430. However, Santa delivered more than just the coaster. This one purchase also included a very soft LEGO blanket, Santa’s Workshop set, mini train, VIP character set, and enough LEGO points to also buy a pirate boat ride set. Individually, I estimate all the additional items to be around $100 value. Still, $330 for just the coaster…

Other things I don’t like about the LEGO Loop Coaster, as already stated, is the car design is not energy efficient, you will need huge hills or multiple lifts to build longer coasters. The second loop feels too small and has too much friction. But the biggest problem was a design flaw. The track on the elevator was too short. There was a large gap to bridge between the lift and the turn at the top. I changed two pieces from 1×3 to 1x4s to decrease the size of the gap. 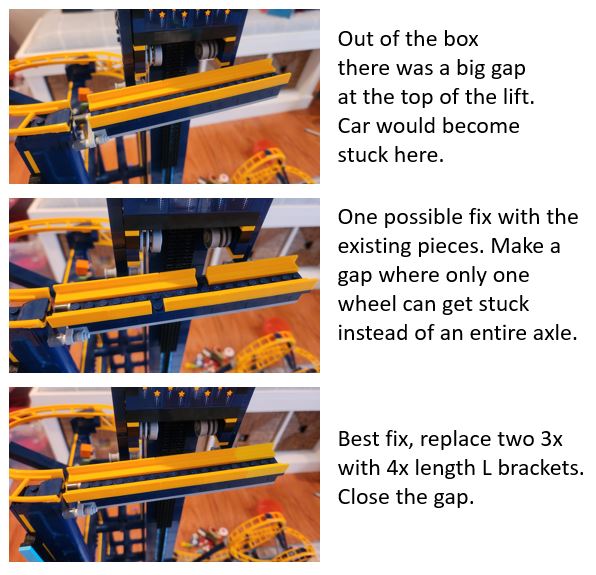 The lift is so cool – when it works. It is very finickity, especially when you hook up a motor. Watch the end of the video below to see what I mean. I believe I found a mistake in one of the instructions, but one issue out of 500+ steps is acceptable. Admittedly, in our excitement to get a working coaster going there were three or four times where we made a mistake, missed a step, and had to go back and fix a problem.

Now, let’s talk about what I love about the CDX Blocks Sidewinder. First, it works great, the cars are energy efficient and maintain their momentum, meaning you can build really long layouts without needing a ton of height. You can make a realistic steel or wood coaster (the CDX Cyclone uses the same trains and track but a lattice style support structure). The only limit to the number of designs you can make is your own imagination.

If cost is prohibiting you from purchasing the LEGO, go CDX all the way. You could purchase three Sidewinder sets AND a Little Dipper for less than the cost of the LEGO Loop Coaster.

Now, what are some of the things I don’t like about CDX Blocks or could be improved? After a few years and multiple builds, my track has become very twisted and is hard to put on, so much so that I’ll probably need to replace it (if I had been better about storing it from the beginning maybe not an issue). 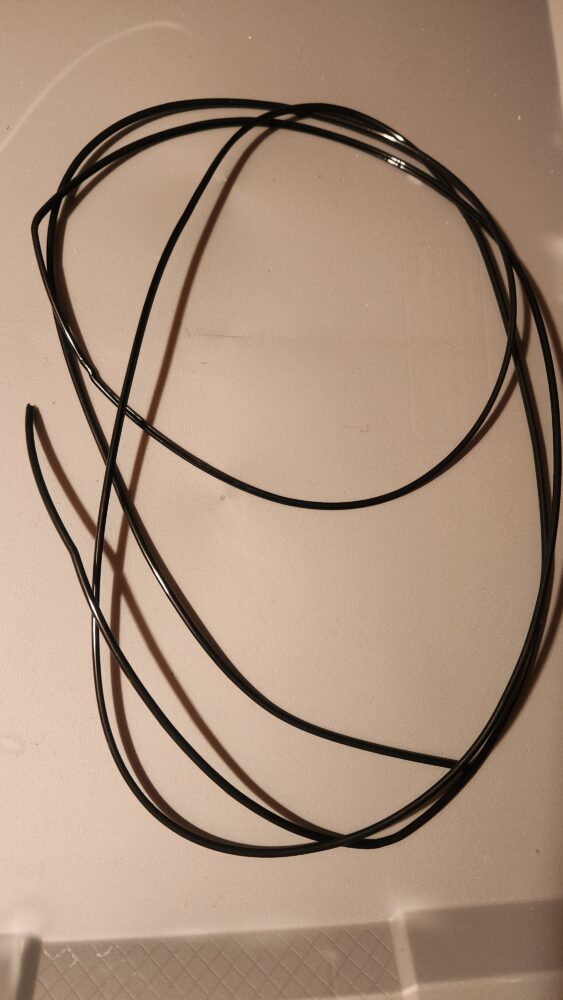 The instructions could be better as I’ve found myself making mistakes and having to pay very close attention. Of course, LEGO has countless years of experience making instructions while CDX is relatively new at this. CDX can be more challenging than LEGO but sometimes it leads to frustration. Getting the angle of the base of the turns right is tricky. As you can see in the video above, they got a little wonky and not perfectly circular, but the track was still plenty smooth. 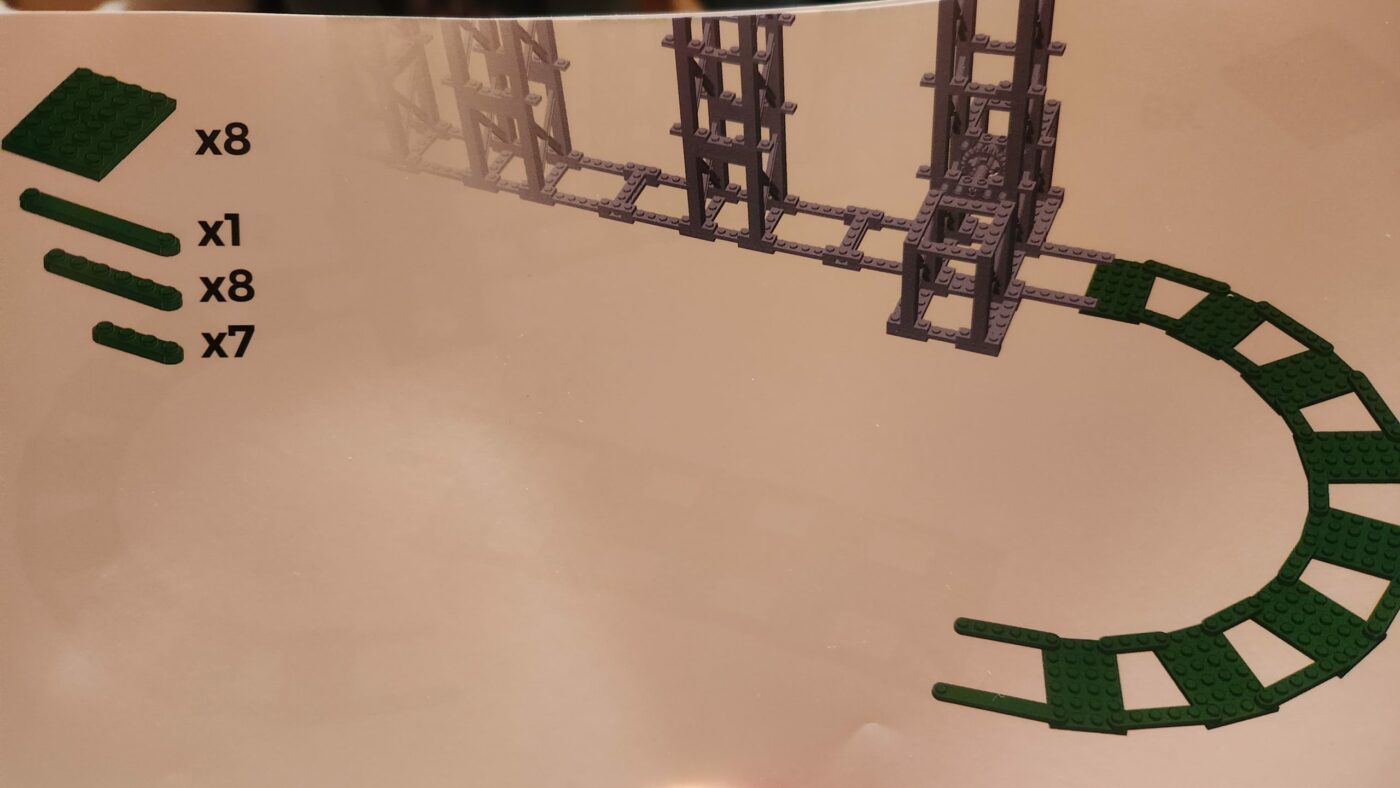 Other minor issues, your fingers will hurt after snapping all the ties on the track tubes. Parts are compatible with LEGO but seem to have an inconsistent clutch strength (some parts are really tight and others are loose). You can’t run your coaster until you put the track on which is the last step. And there are no mini-figures or any theming, it’s just the coaster (but what a slick coaster it is).

Which roller coaster building set do I recommend? The answer is either one, but it really depends on what you’re going for. If you want to build an RMC coaster recreation or a realistic wood coaster, CDX Blocks is the way to go. If your children want to “play” with the coaster then LEGO with all their details and mini-figures is what you should get. If cost is an issue, CDX Blocks has smaller sets for $40-$60. If you’re into engineering or want a challenge, the LEGO Loop Coaster is so much fun to build and definitely worth the investment.

Get the LEGO Loop Coaster from Lego.com and the CDX Blocks Sidewinder from Amazon.

Have you built the LEGO Loop Coaster or the CDX Blocks Sidewinder? Which realistic coaster building set do you prefer? Let me know in the comments below!