Coaster101 Roundtable: The Coasters We Want To Get The “KCL Treatment.”

Last year at the IAAPA Expo, we met KCL Engineering, a mechanical and electrical engineering firm based in West Des Moines, Iowa. As it relates to the amusement industry, KCL is becoming well-known for their roller coaster lighting packages, which first debuted on the Gerstlauer Infinity Coaster “Monster” at Adventureland in 2016. 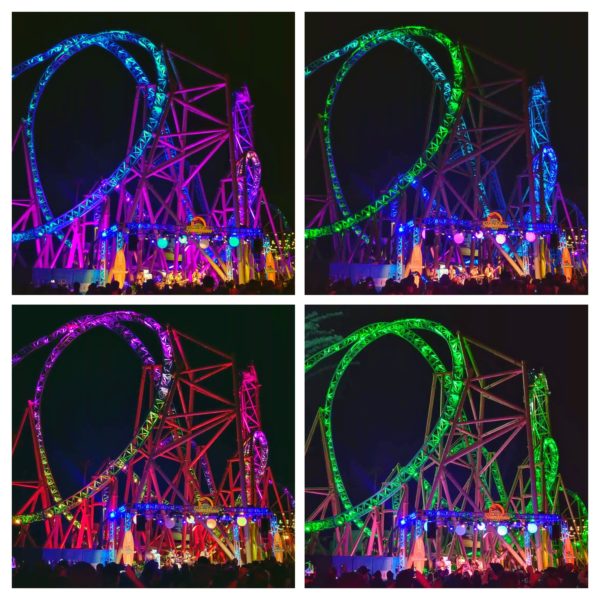 This year, KCL Engineering has completed two more amazing roller coaster lighting packages. HangTime at Knott’s Berry Farm recently opened with an amazing package, and KCL also recently finished adding the lights to Adrenaline Peak at Oak’s Amusement Park. While we’re mesmerized by the “light shows” that these coasters all put on, it got us thinking.

“If we could choose three coasters to get a lighting package from KCL Engineering, which coasters would we light up?”

These are really just our wish-lists for fun, but it might be helpful to understand a bit about what rides are the most feasible for KCL Engineering to light.

The main key to the way they light their rides is mounting their LED flood lights onto the track. That means the best coasters for it have a structure that’s easy to mount to, and have an open enough track design that the light can flood out from the light easily. Gerstlauer Infinity to coasters with all those relatively thin bars on their track made for good first candidates. B&M Coasters with the giant square spine? The lighting wouldn’t necessarily work. Wooden Coasters with lots of structure would also be some challenge and might need a different design, but as KCL told us in our interview at IAAPA, they’ve thought about trying to light a wooden coaster.

(It’s also worth noting that KCL Engineering are partners with Ride Entertainment, who are also partners with Gerstlauer, which makes sense as to why the first three KCL Roller Coaster lightning projects have all been Gerstlauer coasters!) 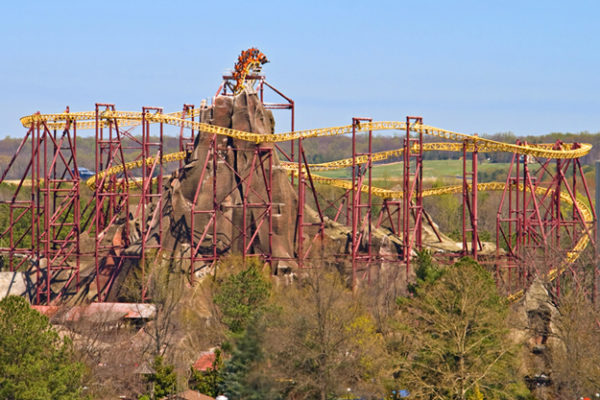 1. When asked this question, my mind immediately went to Volcano: The Blast Coaster at Kings Dominion. I think it would be really cool to see the track light up bright orange when the train came out of the top of the Volcano, just like a volcanic eruption (maybe with some bright orange spotlights to the sky as well) — then the chase lights could mimic a lava flow chasing the train down the mountain.

2.  Kingda Ka (if combined with Zoomanjaro: Drop of Doom) at Six Flags Great Adventure would be an interesting choice too. Despite the short ride cycles, I think there’s a lot of possibility of interaction between the two attractions with some lighting effects (even if they never cycle at the same time). 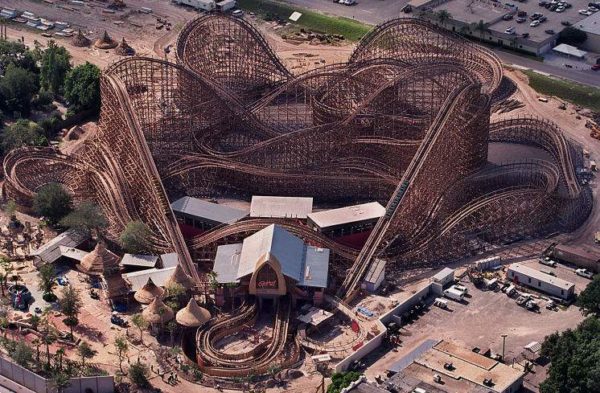 3. Even though it’s no longer operating, I think with its multiple crossovers (combined with how amazing the lights would look on a wooden coaster), Gwazi at Busch Gardens Tampa would have been a cool coaster for KCL to light. It’d put on quite the show at night with the two trains racing and darting back and forth.

1. When I was at the HangTime opening ceremony, I chatted briefly with Andy Versluys and Tom Kendrick from KCL. We happened to be sitting in view of Xcelerator when I was asking about other coaster models that would be a good candidate. We all sort of looked up at it. Obviously Knott’s now has an amazing lit-up coaster in the same section of the park, but I like to imagine what a lighting designer could do with having two of these next to each other. Could you have the coasters communicate and play-off each other, or have complimentary sequences for special events. Plus Xcelerator could sync with Supreme Scream next to it which gets lit up for special events already. I like the idea of lots of interaction between the nearby lit rides. And Xcelerator is awesome, so why not light it. 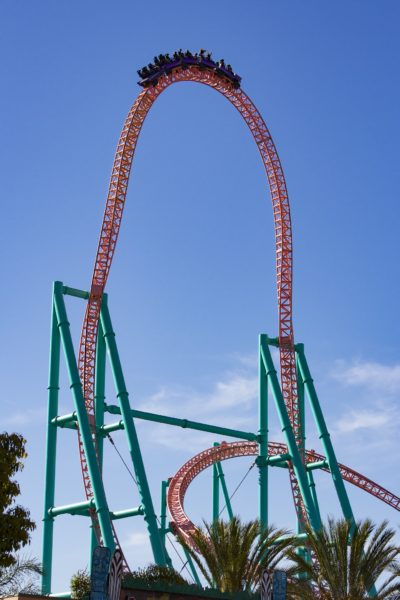 2. I know that one of the coasters at Cedar Point would be great, but it was hard to decide which one. Millennium Force seems like an obvious choice because of how it towers over the lake and how big it is, but I wonder if it’s actually too big. A tight design/layout might be better (like the Infinity Coasters). Then I thought of Maverick. It’s already a beautiful ride and the layout goes back and forth on itself nicely. I also get excited thinking about what could be done on the launches and having multiple trains running at once. You’d get some places where the view would look like the chase lights were crossing over each other. Maverick seems like an amazing candidate. 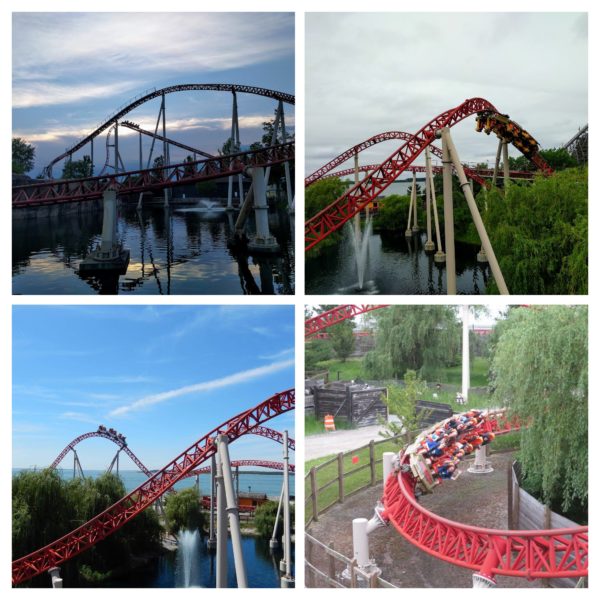 3. Like Andrew’s idea for Gwazi, I keep thinking some kind of racing or dueling coaster would be awesome. The one that came to mind was Twisted Colossus (partly because of my West Coast bias). Obviously a little different and maybe less feasible because with the RMC structure, but I love imagining how two sets of chase lighting would look. The way the tracks twist around could offer some great chances to have dueling sets of lights crossing over each other. I think the real downside if you can only really see the ride from the parking lot, but it’d be really fun to watch from said parking lot, ha! 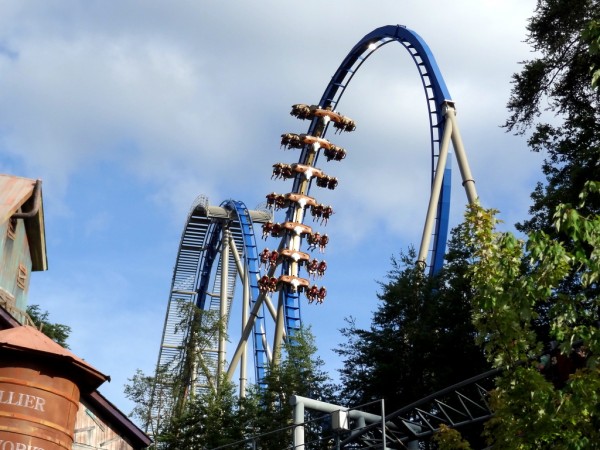 1. Wild Eagle at Dollywood. A few years ago, Wild Eagle wouldn’t have crossed my mind. At one time, Dollywood rarely stayed open past dusk (outside of Smoky Mountain Christmas). And part of the allure of Dollywood is its tied-to-nature themes. However, the Timber Canyon and Wilderness Pass areas (the latter of which is home to Wild Eagle) have somewhat morphed into a brightly illuminated area of the park at night, especially with the lighting package on the park’s new-for-2017 Drop Line tower. With the coaster’s prominent placement on top of a hill, most of the layout is visible from the path. That would make for a perfect stage for such a dazzling lighting display.

2. Another eagle: American Eagle at Six Flags Great America. This 1981 racing wooden coaster stands nearly 13 stories tall with a layout that runs nearly perpendicular to I-94. Its towering helix is less than a football field away from the interstate. A lighting display on this coaster would be visible for miles and impossible to miss. Part of the structure is already illuminated at night and makes for a stunning visual from both the interstate and the park. And with the park debuting Holiday in the Park for the first time this year, a Christmas-themed light show on America Eagle seems like advertising that is too good to pass up. 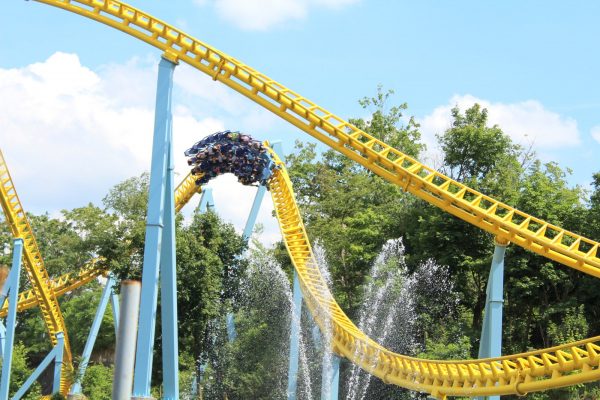 3. Skyrush at Hersheypark. While Skyrush doesn’t have the same visibility as Wild Eagle or American Eagle, the view from the path that runs alongside Spring Creek — which Skyrush is built over — would be an attraction all on its own. 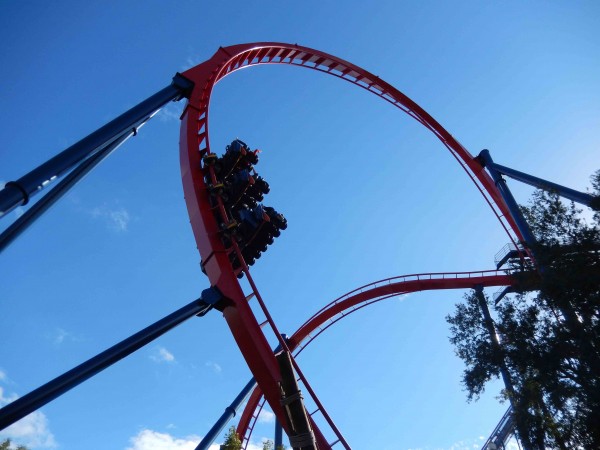 1.  If I had my choice of coasters to get the KCL treatment with feasibility being thrown out of the window, it would definitely be SheiKra at Busch Gardens Tampa. It already is the tallest ride in the park, and with its location it can pretty much be seen no matter where you are in the park. The lighting package could definitely highlight the 200-ft 90 degree dive, and it would be cool for the track to continue to light up around the train as it dives and swoops through the ride layout. It definitely would bring out the “diving bird of prey” theme of the coaster.

2. Cheetah Hunt at Busch Gardens Tampa would also be an excellent choice to get the KCL light package. The coaster is long and has a great layout. The lighting could really bring out the coaster as the car launches up to the top of the Windcatcher’s Tower. Though not quite as tall as Sheikra, Windcatcher’s tower is still visible from much of the surrounding area. The lighting would be visible all alongside the path from Nairobi to Pantopia. The only concern would be whether the lighting would disturb the animals along the Serengeti. 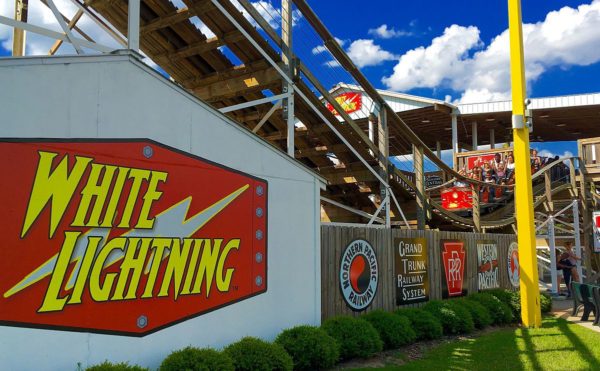 3. White Lightning at Fun Spot America would also be a great coaster to get the KCL lighting treatment. It definitely would help draw attention to the northern section of International Drive. Plus, the lighting would fit the name! 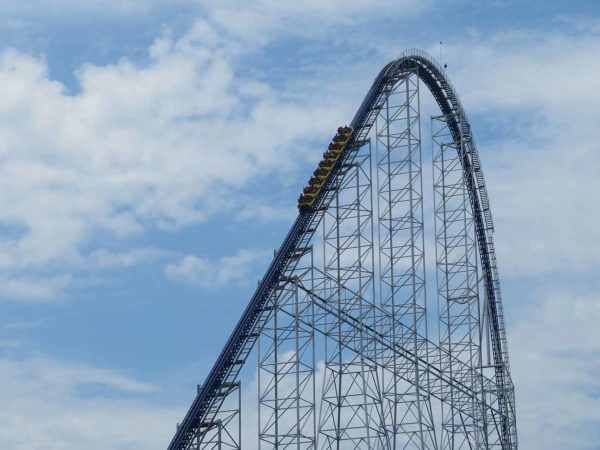 A coaster at Cedar Point definitely needs this, and I’m thinking Millennium Force or Top Thrill Dragster are the best candidates. Millennium Force can be seen across the bay in Sandusky. And how about timing those wicked lights up to the 120 mile per hour launch on Dragster? 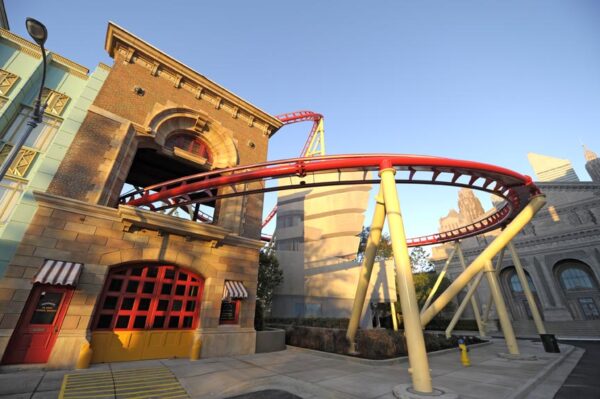 Not sure how feasible, but I thought Hollywood Rip Ride Rockit at Universal Orlando just because of how visible it is. The lighting on the track could be seen from all over City Walk, not only adding to the energy of the area but drawing guests closer into the park.

So those are some of our choices (both pretty feasible and more pie-in-the-sky) for roller coasters that we’d love to see get the “KCL treatment”. What are some of the coasters you’d most like to see get a fancy new track lighting package? Let us know in the comments below! And if you want to learn more about KCL Engineering, check out their website!