HangTime at Knott’s Berry Farm Review: Even More Fun to Watch Than it is to Ride

The first ever Infinity coaster on the West Coast, and only the second in the USA, has officially opened to the public. HangTime at Knott’s Berry Farm opened this weekend, the first major new thrill coaster at the park really since 2004’s Silver Bullet (the park did add two Mack rides in between, but they were more family coasters). Thursday evening the park held an opening ceremony/party to celebrate the new roller coaster, and I was lucky enough to join in the fun. 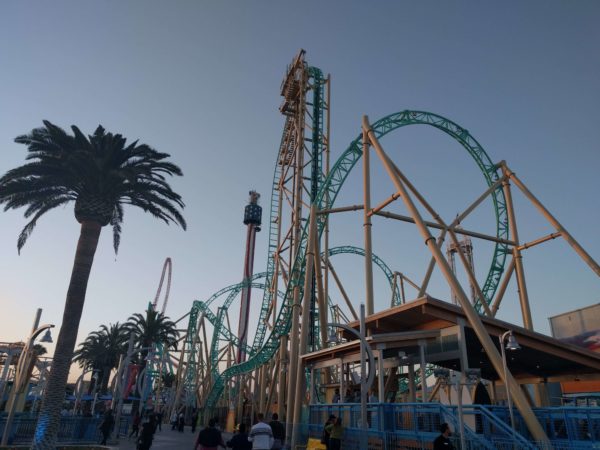 The ceremony included tons of great Knott’s touches, like HangTime themed food, Boysenberry beer, a sneak peak at one of the parks new shows, Beach Blanket Beagle (appropriately HangTime and beach themed), and some time on other boardwalk rides (which I took lots of advantage of on Xcelerator). 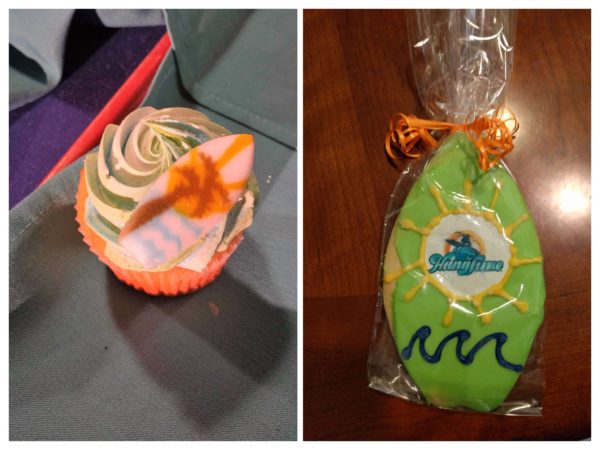 It wouldn’t be Knott’s without some great HangTime themed eats. 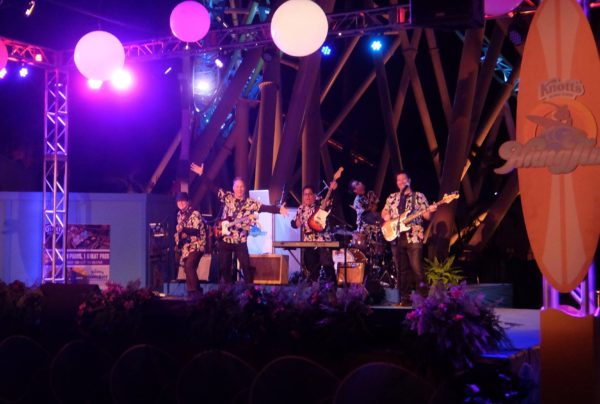 And of course, some surf rock from the band Ride the Tide!

A presentation by park GM Jon Storbeck kicked off the official opening, highlighting new shows at the park, the new season of Ghost Town alive, and HangTime. With that, the ride went into action to the music of a live surf rock band (and fireworks display).

HangTime is a Gerstlauer Infinity coaster, a model of which there are only now two in the United States (The Monster in at Adventureland being the other), and the first Gerstlauer coaster for Cedar Fair since 2004. As a relative rarity in the US, there are a few things about HangTime that make it immediately stand out. First is the completely vertical lift hill, followed by a greater than 90 degree dive drop (96 degrees to be precise). The second aspect of the design that stands out is the tight, twisted, layout that somehow crams five inversions and a bunch of tight banked turns into a space that held a small shuttle coaster last year. 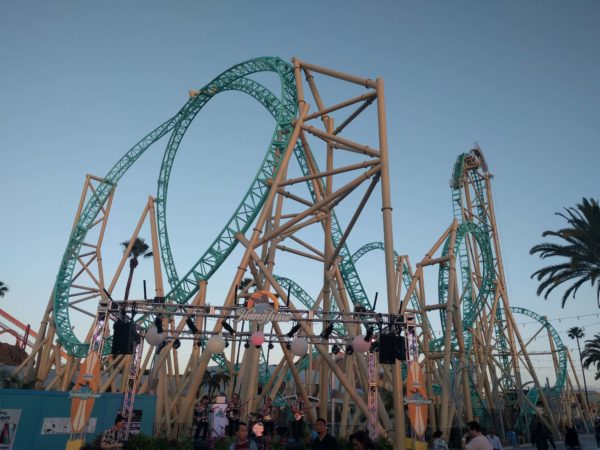 The ride climbs to 150 feet high, hits a speed of 57 mph, and goes through five inversions, but the stats aren’t really what HangTime is about. In fact, Rob Decker, Senior VP of Planning and Design told me that they specifically wanted the ride to have a family-friendly rider height, 48″.

“We wanted it to be broad, but thrilling. That was the challenge we gave Gerstlauer,” Decker told me. “It looks intimidating, but their restraint system and the seats are a really nice design so we could get the rider height we wanted and still get the dynamics. It’s really smooth, I don’t think we’re going to have any issues.”

Up to the Challenge

My experience on the ride showed that Gerstlauer met that challenge. The most intense part of the ride is really the opening, including the lift. As the train climbs riders are lying flat on their back with their legs above them. The blood can rush a bit to your head in that position, and looking to the sides or down is immediately disorienting. Once the train crests the hill, the ride earns its name, hanging for a few seconds with front row riders peering over the edge before it descends the beyond vertical drop. 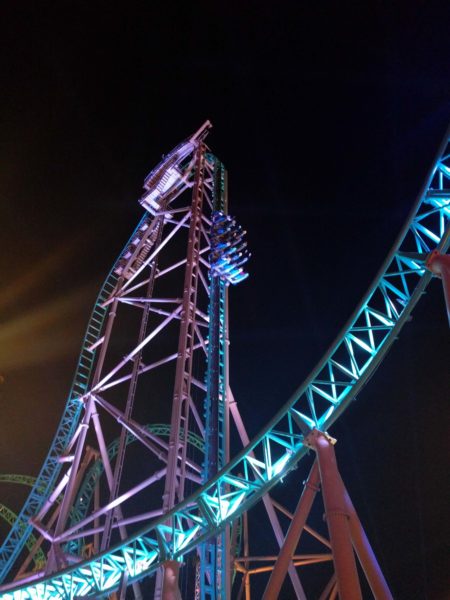 Climbing while backwards, and looking over the side, might be the weirdest feeling on the ride.

Once HangTime gets going, it’s all about the tight turns and inversions. There’s really no break between them, with only about 40 seconds from the drop to the final break run (one inversion every 8 seconds!). But, despite the tightly packed elements, it doesn’t ever feel excessively forceful. The ride takes an almost leisurely pace through some of the loops. That’s great for getting that feeling hanging out of your seat at the top of the inversions (hey, more Hang Time), while also ensuring HangTime is glass smooth through every element. 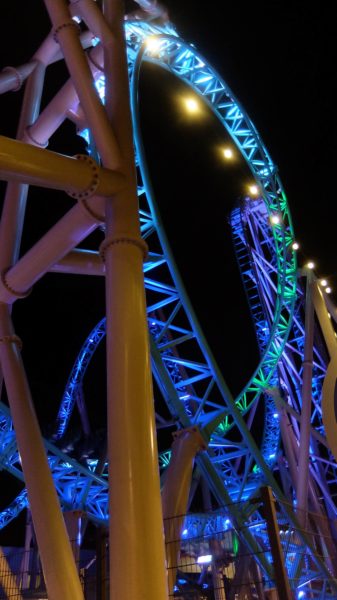 Rob was also right about the restraint system. The lap bar might be the most nicely designed I’ve ever ridden with. No dreaded over-the-shoulder restraints to hit your head against, and no shin guards keep your legs pinned. I’d say it’s most similar to the restraints on a B&M hyper coaster, but in this case the operators don’t crush the lap bar into you as hard as possible. It was downright comfortable. 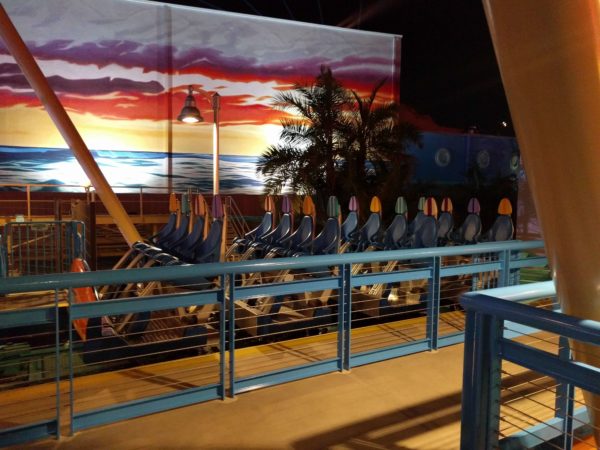 The HangTime seats and restraint system are some of the most comfortable I’ve ridden in, especially for a ride with five inversions. Plus the surfboard design on the headrests is a really nice theming touch.

Where to Sit, and My Favorite Moments

There are definitely a few favorite spots on the coaster that stood out to me. First, I think I decided after a couple rides that the back of the short train was my preferred location. The main reason is the sensation on the drop. When the train releases from its hang at the top of the hill, the front car falls smoothly through the over-vertical dive. The back on the other hand, gets whipped over the bulge in the track that happens just before it goes beyond vertical. This gives a sensation of being ejected out of your seat, like on a good airtime hill, except that you’re facing down, and you’re being ejected forward, not up. The front gets the great view, but the back gave a sensation I’ve never felt on a coaster before. 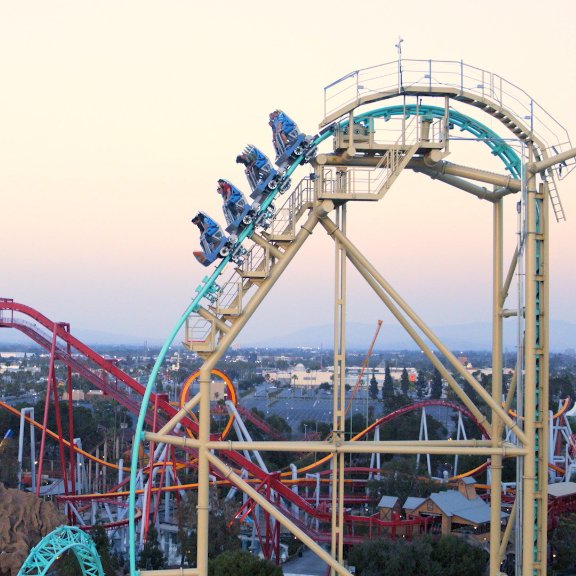 If you turned an airtime hill 90 degrees, you get the opening drop of HangTime from the rear car. My favorite spot on the train. (Photo courtesy Knott’s Berry Farm)

The second moment, and one that I’m already going to call the most underrated feature on the coaster, is basically the only non-inversion, non-banked section of the ride. Just before fourth loop there’s a little section of straightaway that has a small dip in it. Maybe it’s just that it’s a such a quick little drop, or that it’s one of the only times on the coaster where it keeps up the speed, but it almost gives a “drop track” sensation. It’s a moment that stood out between the inversions and over-banked turns

All of the Lights

Of course, anyone who has seen the ride at night (or seen The Monster) knows that the actual highlight of HangTime might be how it looks in the dark. The grand opening and media event for HangTime was held in the evening for a reason. 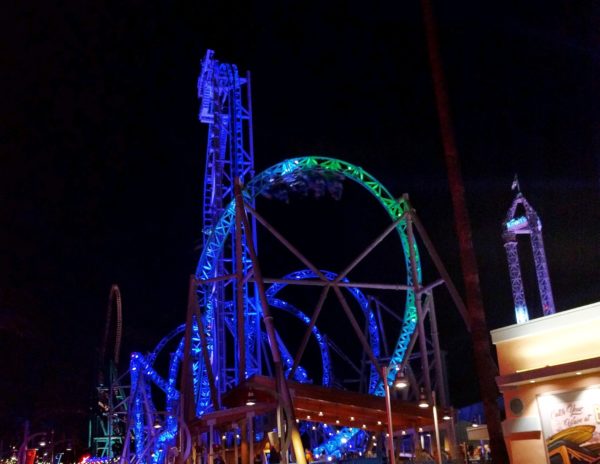 The “Green Wave” chase lighting effects are the standard lighting on the ride.

The coaster has built onto it an amazing lighting package that was developed by the team from KCL Engineering. KCL is best known for their work on The Monster, the other US Infinity coaster, which stunned people with how it looked. We talked to them back at IAAPA about some of the lessons they learned from that project (their first on a roller coaster) and some of the things they were going to be doing differently, and the improvements look to already be paying off. 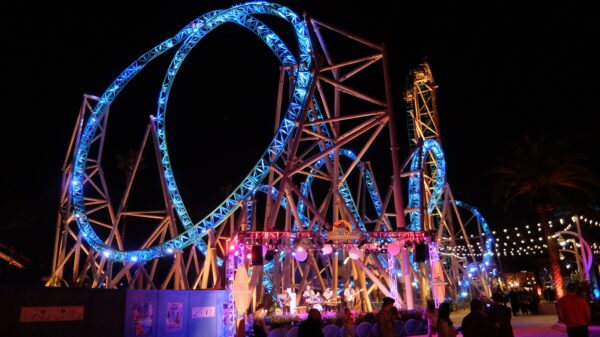 Knott’s showed off what the lighting package can do during their opening ceremony (see the video at the top). The new lighting controller allows the Knott’s entertainment team to take programmed modules from KCL and make custom sequences, like timing the lighting to a live music performance.

“KCL came with 8 programs they designed in collaboration with us, Cedar Fair, and our entertainment division,” Jeff Gahagan, VP of Maintenance and Project for Knott’s, explained to me. “We have the capability of going in and adjusting those light programs.” 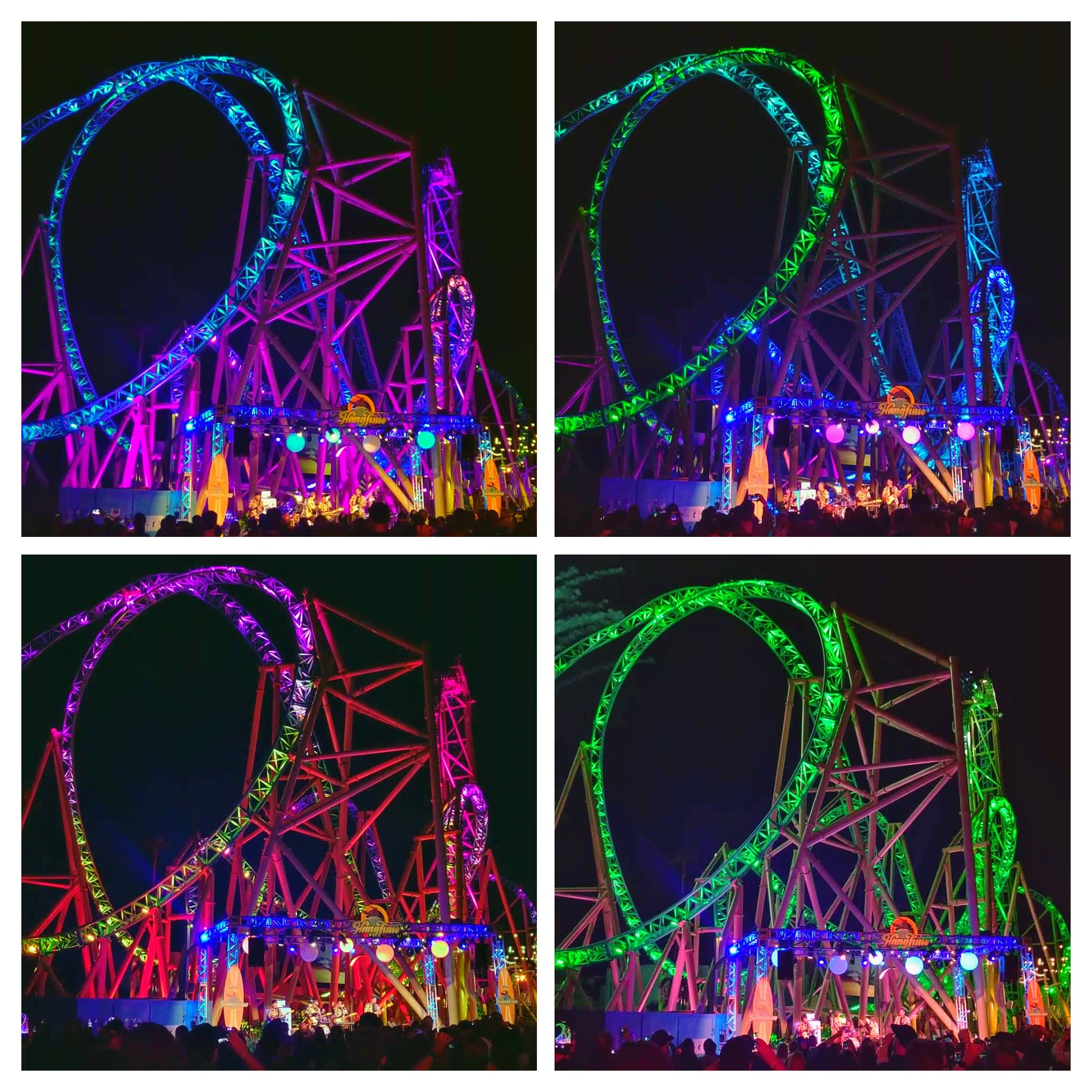 The opening ceremony showed off a lot of what is possible with the lighting on HangTime, from color palette to sequencing. Think we’ll be seeing that purple during Boysenberry Festivals?

The lighting and entertainment team has already started thinking about what they can do with them.

“It was fun was testing the waters just for this opening moment, like how do we take control of that and be able to program it ourselves,” Eric Nix, Entertainment Producer for Knott’s said. “As soon as it was done we were like, ‘oh yeah, we’re going to use this for Scary Farm, we’ll use it for Boysenberry Festival.’ It’s a new palette and canvas for us.”

This is really the other great thing about HangTime. It adds such an amazing highlight to Boardwalk even just as an aesthetic piece. Boardwalk always felt to me a bit desolate compared to the rest of Knott’s. It was always a little dark and empty, and without the character or immersiveness as Ghost Town or Fiesta Village. With HangTime’s now there’s a brilliant, energetic beacon brightening the whole area, not just the coaster itself.

HangTime isn’t going to capture the title of most intense ride at the park, but I wouldn’t be surprised if a lot of guests say it’s the most fun. It adds something completely new to the park, to the West Coast, and really to the US. As someone who loves variety in roller coasters, I think it’s a great fit for the park lineup. And really, even if I were to never ride it again, I’d probably be happy to just sit and watch it. 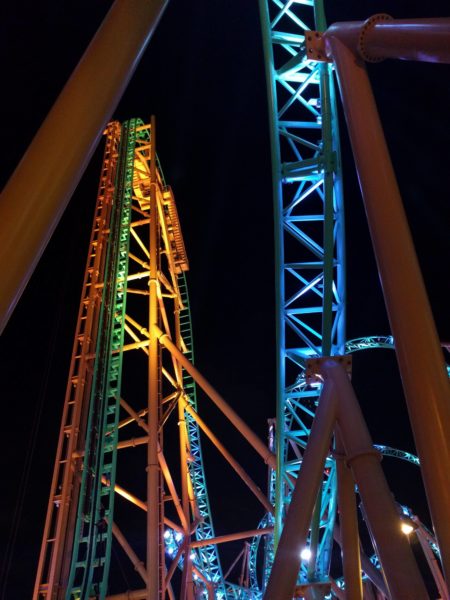 HangTime is now fully open to the public. Knott’s also has lots more going on, with new shows, Soak City now open, and Ghost Town alive coming back shortly. You can find out more about all of that on the Knott’s Berry Farm website.  If you’ve ridden or seen HangTime, let us know whether you agree with my take on it in the comments below, or on Facebook or Twitter. Also check back on Coaster101 in the near future, as I’ll have a deeper look at the background of the project from my interviews with Rob Decker, Eric Nix, and Jeff Gahagan.  Plus lots more content on ride openings as the summer season gets going! 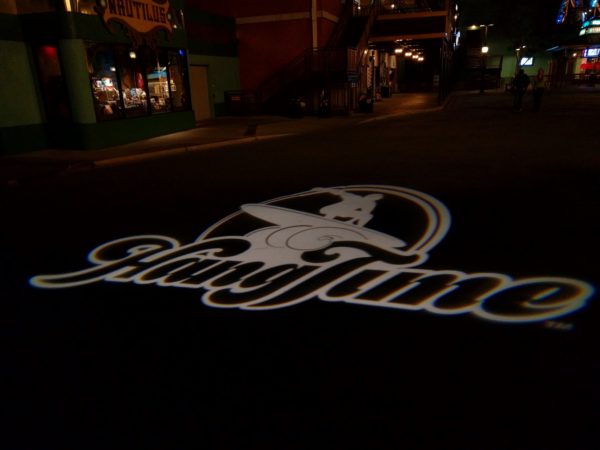 Oh, and if you want a little Easter egg, when you’re watching the awesome chase lights from KCL try to find the spot where they re-sync the lights. The chase effect is all timer based, but roller coasters don’t always run at the same speed. So KCL added a sensor in the middle of the ride that lets them adjust the chase lights to get back in time with the coaster. If you look closely you might see the lights jump ahead or jump backwards a little bit.