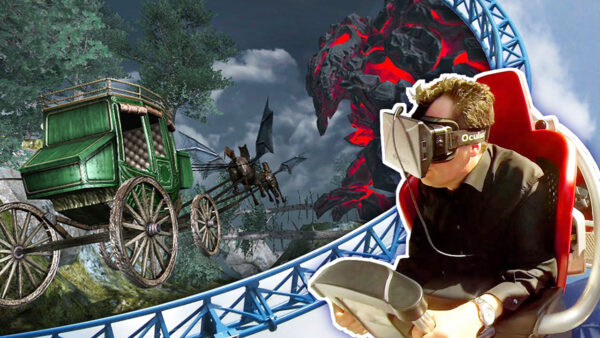 Ah, the Augmented Thrill Ride Project. It’s like riding roller coasters but 10 times more awesome because it allows users to enjoy the thrill of a coaster while seeing an entirely different scenario. The Augmented Thrill Ride takes players deep into the world of VR where they can see themselves riding on the back of a fire-breathing dragon or swimming deep into the abyss of an ocean.

The Augmented Thrill Ride is used with the Oculus Rift virtual reality headset, which is breaking barriers with its amazing physics and accurate controls. With the Augmented Thrill Ride and Oculus Rift combo, users see their eyes with hyperbolic visuals that allow them to shoot enemies while riding dragons or they can deploy torpedoes when deep under water. The technology is now being used on coasters but in a year or two.

Canada’s Wonderland is now testing VR headsets on their Thunder Run coaster to make the experience diverse to its guests. Just like the Augmented Thrill Ride, Canadians can experience a 360-degree 3D ride that synchronizes whatever they’re seeing on the monitor to the motion of the coaster. Canada’s VR Coaster’s secret is perfectly synchronizing steep coaster drops to breathtaking VR animations to increase the excitement of quickly falling down from a high place. The best thing about the VR coaster? It doesn’t gives riders motion sickness.

FIBRUM is the closest VR experience that you can currently get in the comfort of your home. With it, you don’t need to go to an amusement park as you can enjoy a VR experience straight from your smartphone.

FIBRUM is 100% wireless and is compatible with current gaming accessories in the market including gamepads and headphones. It uses a smartphone’s screen so it works on anything that has decent hardware because the old quad core tablets won’t work with it. In fact, some quad cores that were released in 2012 are so outdated now that they can’t even properly render games as simple as casual bingo or slot machines, or a title that combines both sorts of games, that use technology from HTML 5. So, when playing FIBRUM games, make sure to be near a wall plug. FIBRUM releases new games and VR apps every month so users will always have something to look forward to.

This is a contributed article by Patrick Philips.