Inside the Most Impressive Backyard Roller Coaster I’ve Ever Seen: Little Thunder

When you first see Sean LaRochelle’s new backyard roller coaster, Little Thunder, it’s pretty obvious what inspired it. That alone is a testament to how detailed and impressive it is. Taking up the backyard of LaRochelle’s parents’ home and surrounded by vineyards in Napa, California, the reddish orange mountain with roller coaster track weaving through it clearly evokes at the Big Thunder Mountain Railroad. 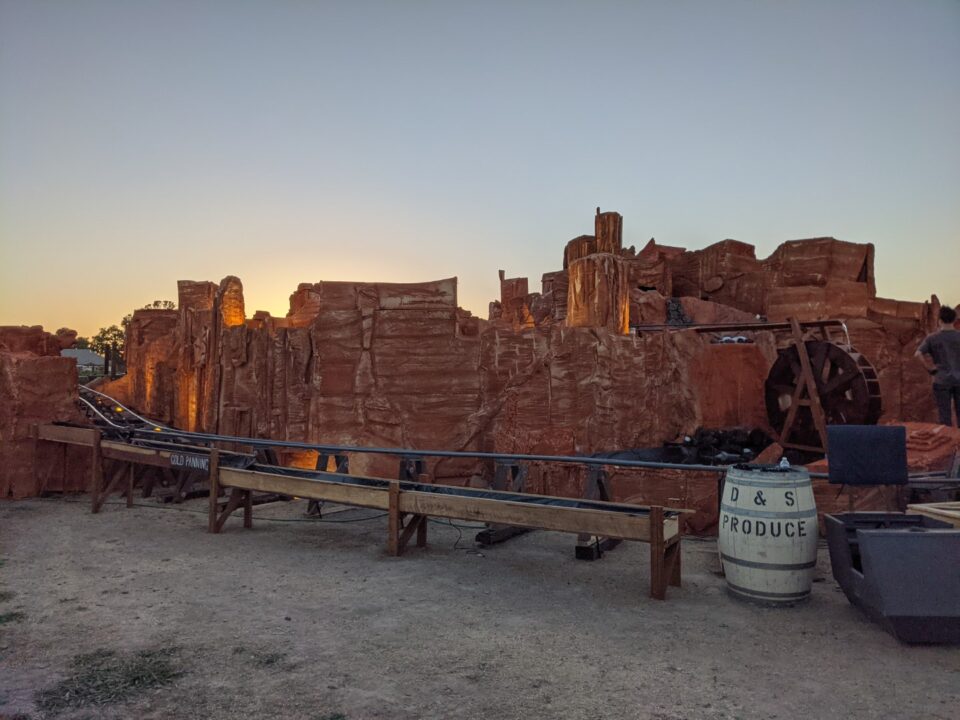 “It was actually a COVID project,” Sean explained. “I’ve never really had a summer off because I’ve been working for the past 10 years, so I was like, “Hey, I don’t think we’re gonna have an opportunity again.”

Matterhorn: Alpine Escape finished in November 2020, but the plan had always been to pull it down.

“Part of the issue is that we don’t have permits for this or anything. So anything we build is temporary. We call it a play structure, call it a kinetic sculpture call whatever you want,” Sean told us. “For me, it’s more just like an opportunity to explore.”

They also knew they wanted to do something bigger and better. So they started designing, and in May construction on Little Thunder broke ground.

For Little Thunder, they knew they wanted to add more thrills, and add even more of a story and theming. On the thrill side, this meant including plenty of helices and hills, and also adding one major new element: A compressed air launch. 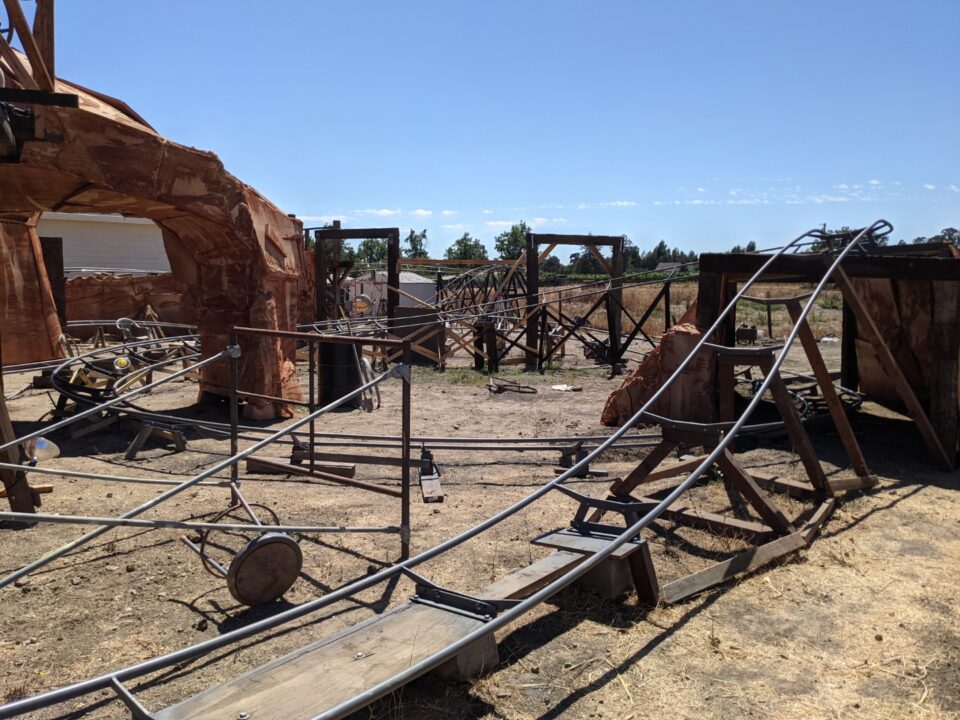 Sean’s brother Michael largely handled the mechanical design, working on the lift hill, train, and launch. And the lessons from Alpine Escape were key to them being able to achieve this higher level of ride complexity. 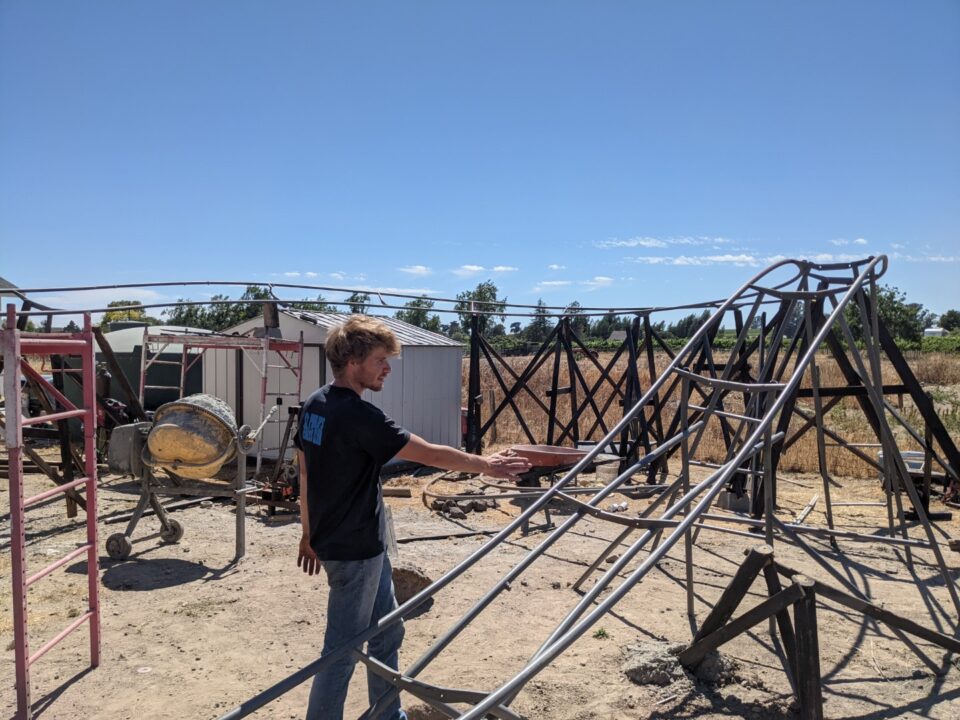 Sean LaRochelle showing the construction of the Little Thunder track. 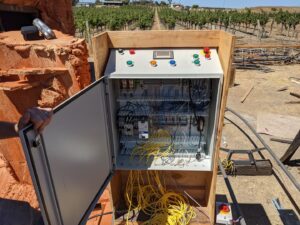 “I think precision is a huge thing that we learned.,” Sean said. “I think that we had this mantra, ‘Oh, it’s good enough. It’s good enough.’ But for this one, the, first thing we did, we surveyed every single elevation change on the track. By planning it out that way, and making sure that everything was super precise, basically, the first time we ran the spine, it worked. So doing the math, just making sure everything is really precise. That was a big thing we learned.”

The car is held in the station by a pneumatically controller brake.

This means they also used sensors, PLCs, and pneumatic actuators throughout the ride. When there are effects that need timing, and a launch that needs timing, that precision is critical.

Theming as much as thrill

But, even more than adding more thrills and getting the roller coaster working, they wanted to make sure the theming and story took center stage.

“This isn’t just a thrill ride. “Michael (Sean’s brother) and I care more about the story and the meaning behind it than making the greatest thrill ride you could ever go on,” Sean said.

You can see this attitude manifest it in the detail on both the mountain and the surrounding detail. Most backyard roller coasters are just roller coaster, but on Little Thunder it looks like almost more effort went into the theming than the coaster itself.

The front of the ride is surrounded by an “Old West” town, designed and painted by Sean’s sister Nicole, who is a historic preservationist by trade. Details include wanted posters of people who worked on the projects, troughs and hitching posts, and even a broken locomotive engine. All the while a old west sound track composed just for Little Thunder plays in the background. 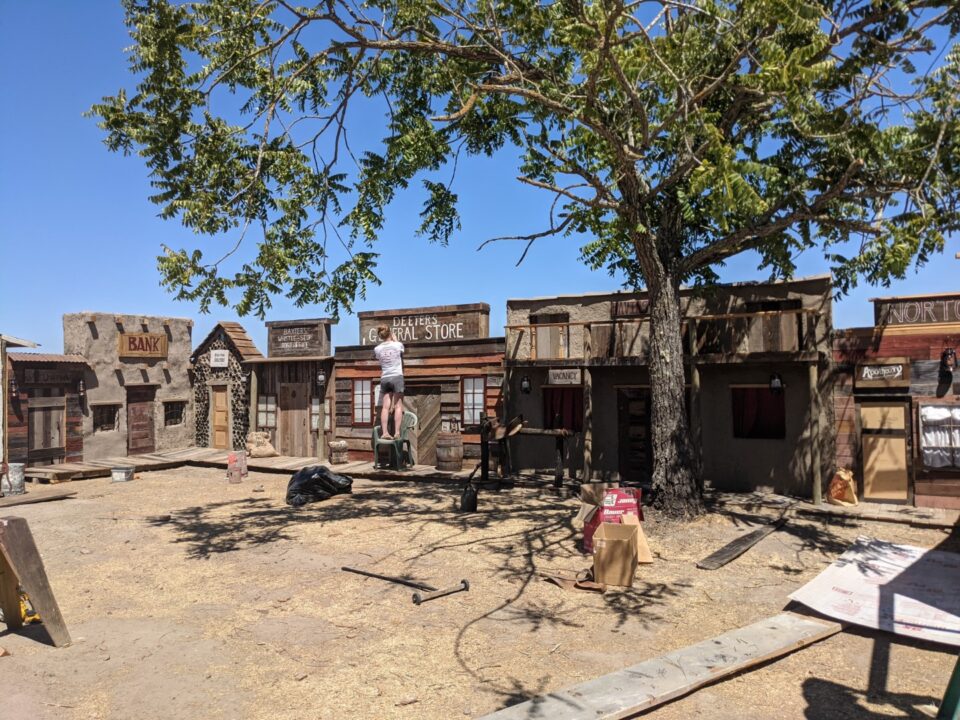 Nicole LaRochelle working on the finishing touches of the town.

Turning towards the mountain, you see a working water wheel, with fountains below it. The mountain itself is beautifully cut and painted, made from defective couch foam. Even the lighting package stands out, with colors illuminated the scene at night. 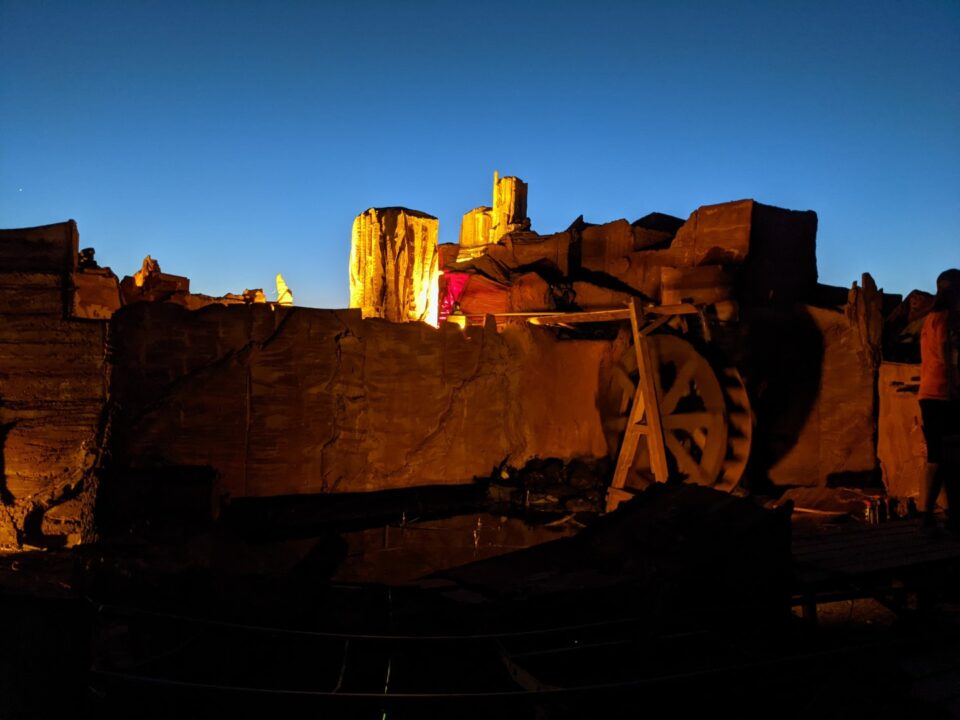 The rockwork is especially impressive. Sean’s wife Emily made the initial design and built the top layers. Then, on one weekend, they hosted a rock party, where 40-ish volunteers came and helped cut and color the foam work. Everyone was given free rein to cut the foam in their own way. 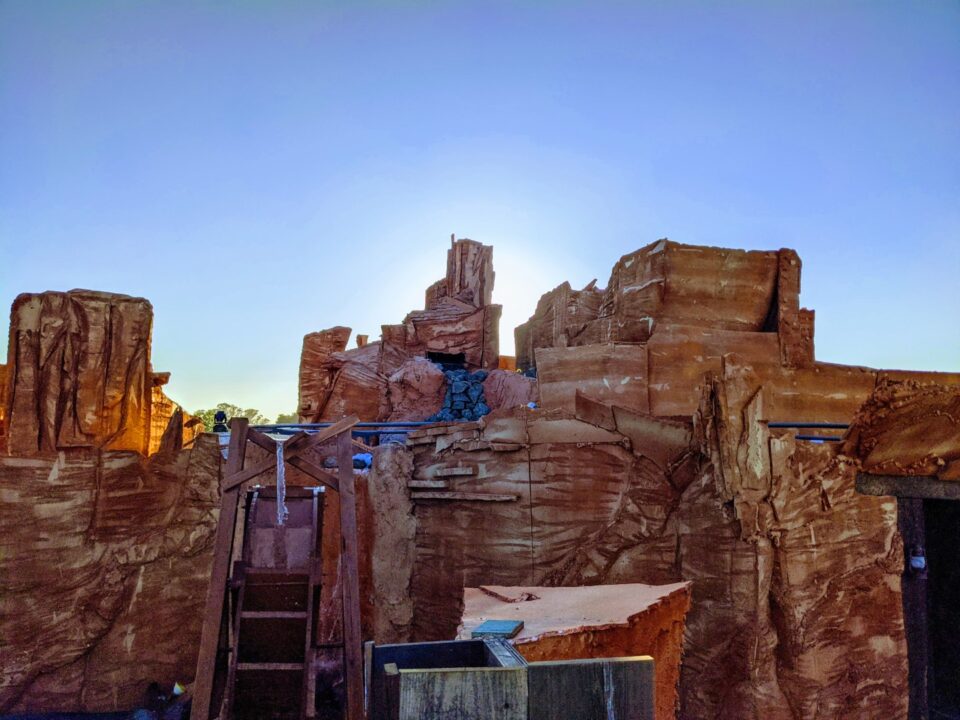 “I told people I want there to be unique sections, I want you to put your own character into it because I feel like first, it’s going to look more organic, and second people who did that feel like they have a connection to it,” Sean explained.

You’ll find a few little Easter eggs among the rocks, like a Hidden Mickey and a Clemson Tiger logo (where Sean is current in an Architecture Master’s program). 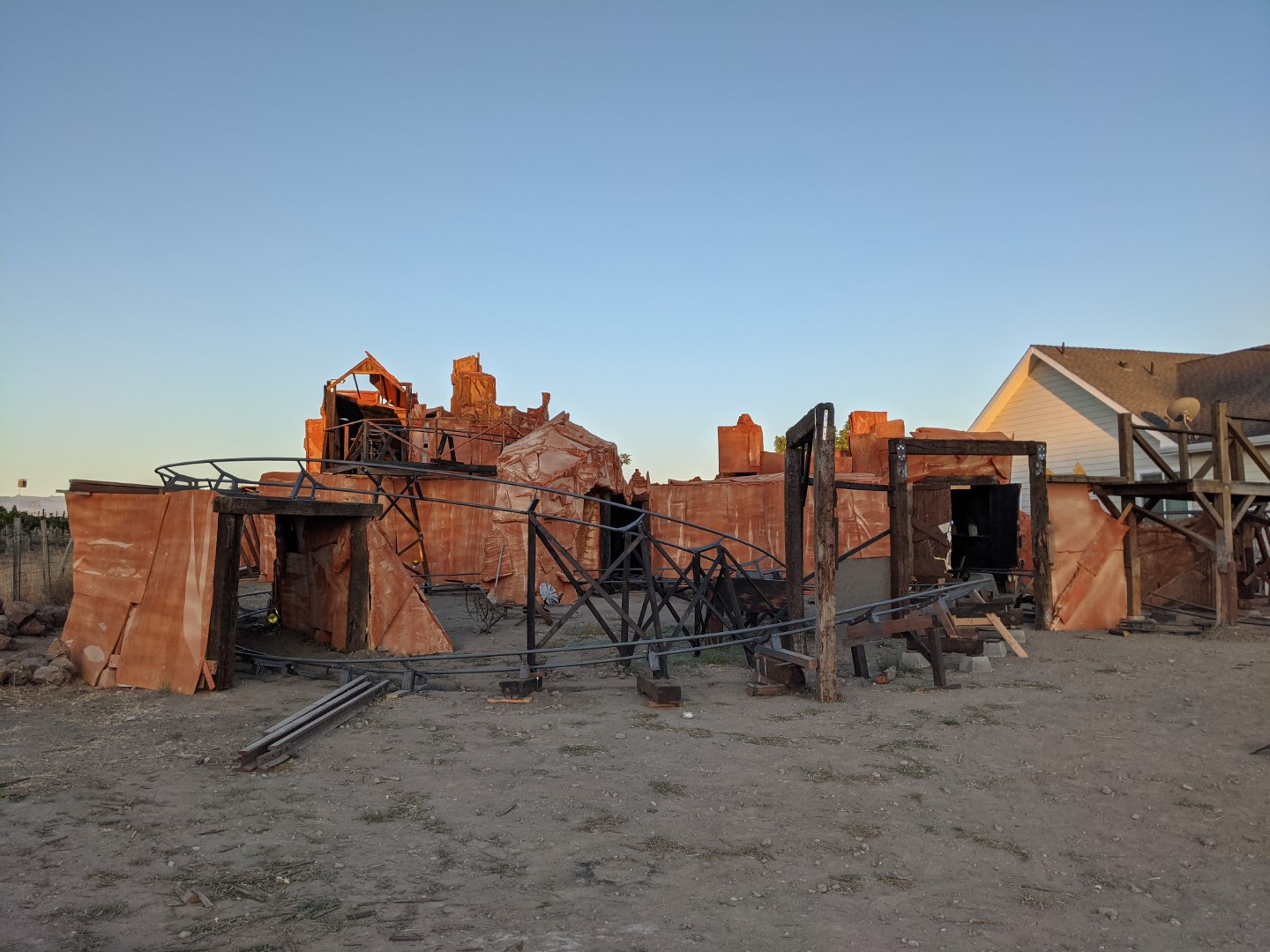 Can you spot the hidden Mickey on the rocks?

The details extend inside the ride too. The chain lift hill includes a lit fountain with stalactites and stalagmites, again evoking Big Thunder Mountain. The top of the lift exit has a peaked roof, like an old mine entrance. And then, finally, there’s the ride’s climax. 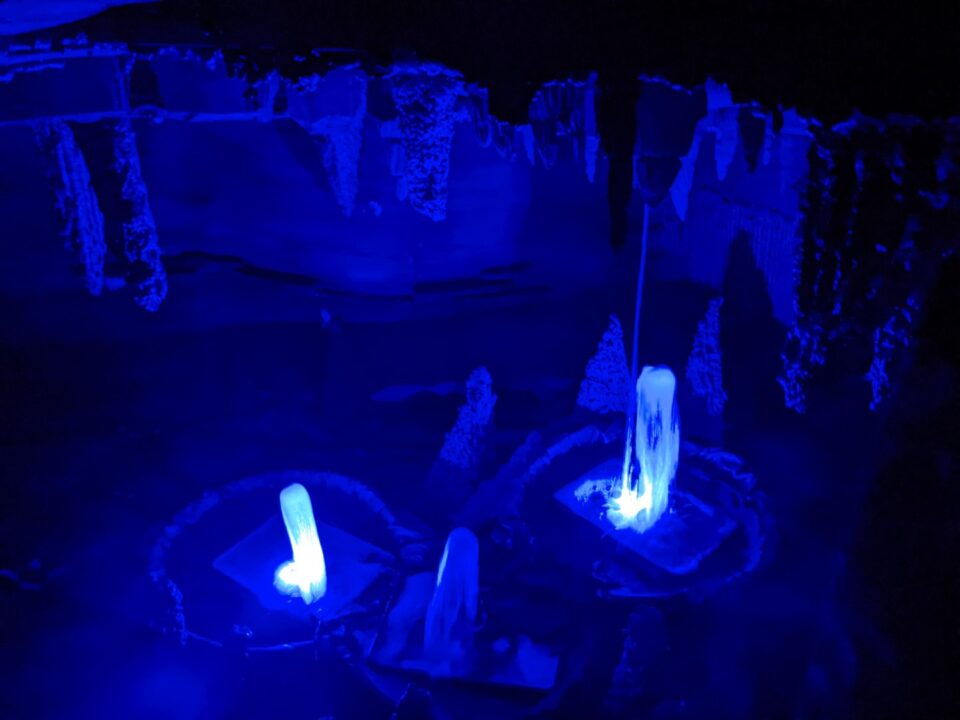 Lighting, stalactites and stalagmites, and fountains inside the Little Thunder lift hill. 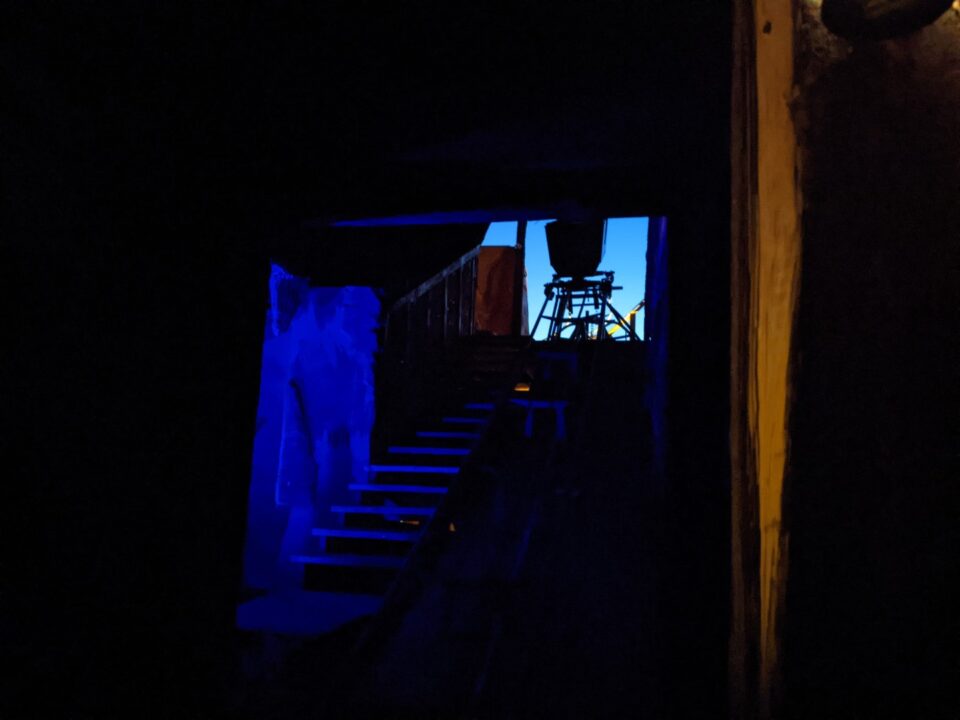 The Lift to the Launch

When you exit from the lift hill, the track circles around the mountain, before dropping into a full over 540 degree helix and sending you into a cave. A live actor (Michael in my case) guides you into the nearly pitch black cave and sets you into the launch position. 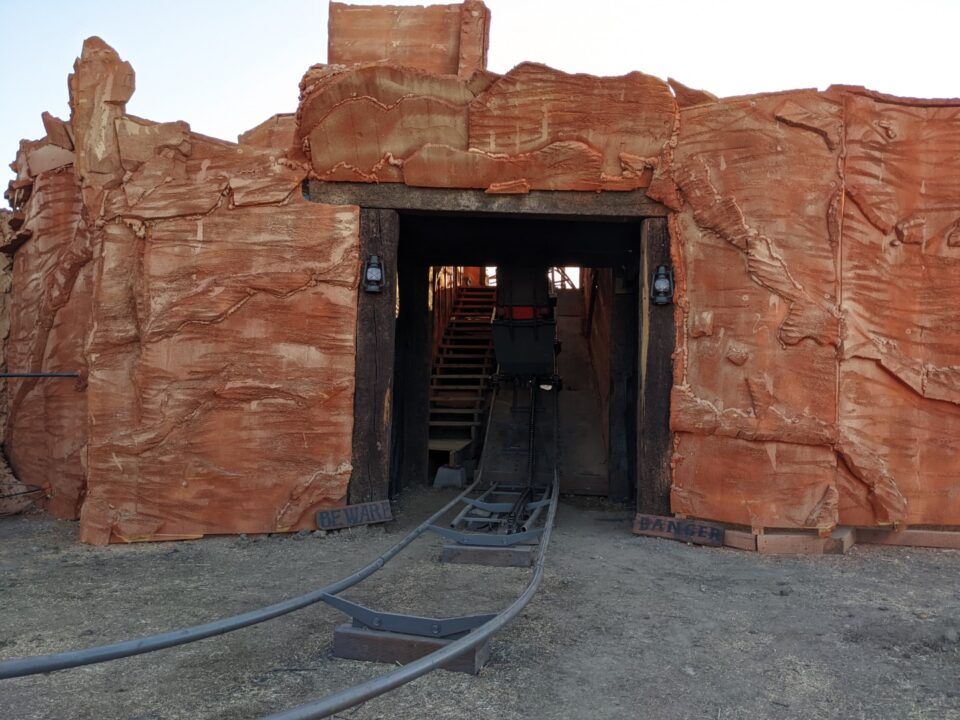 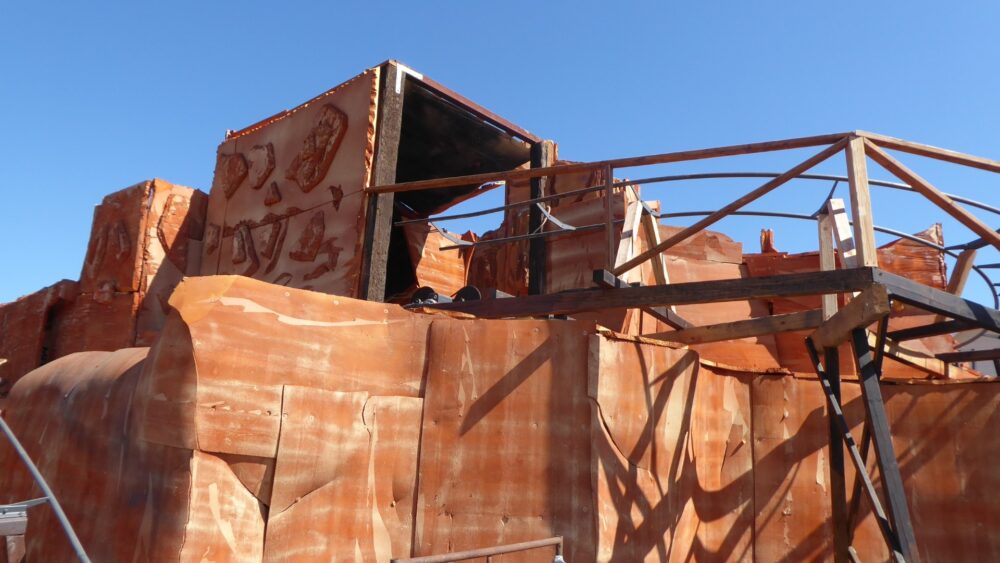 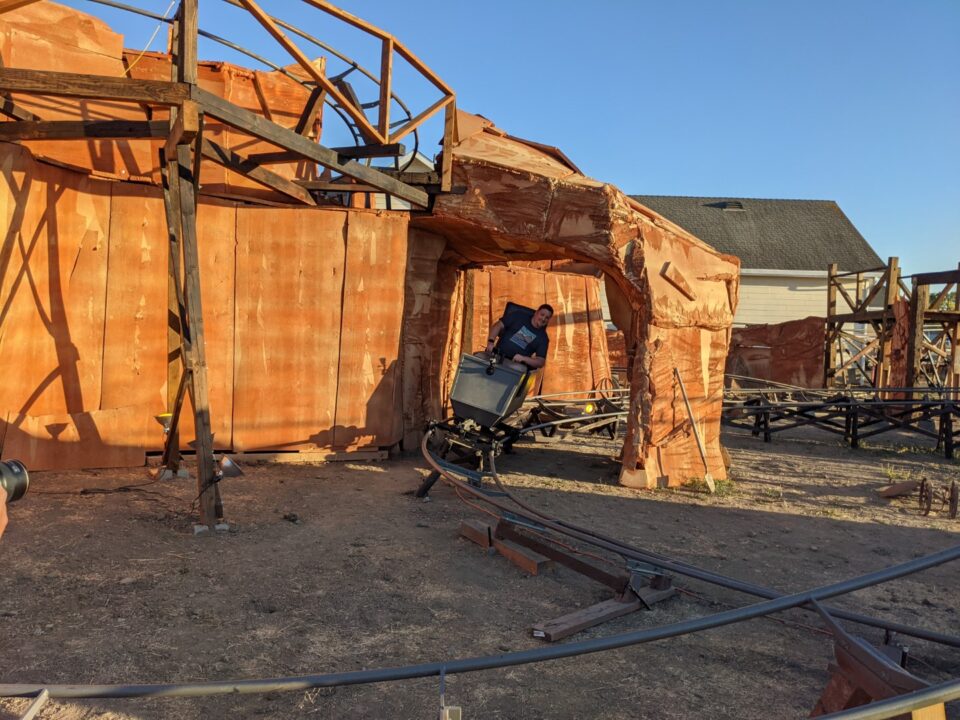 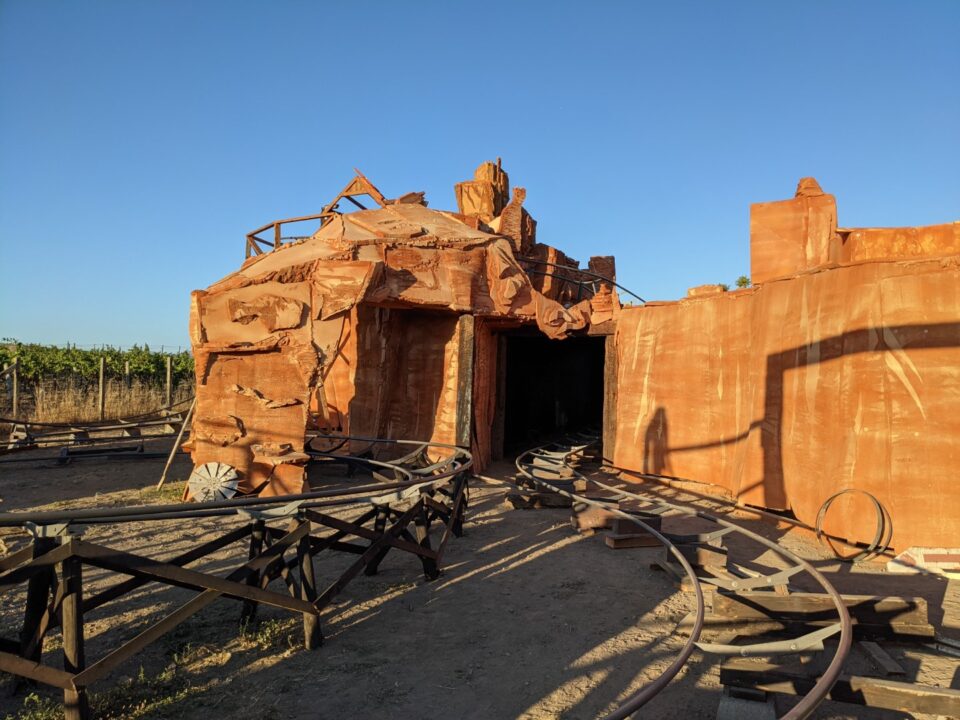 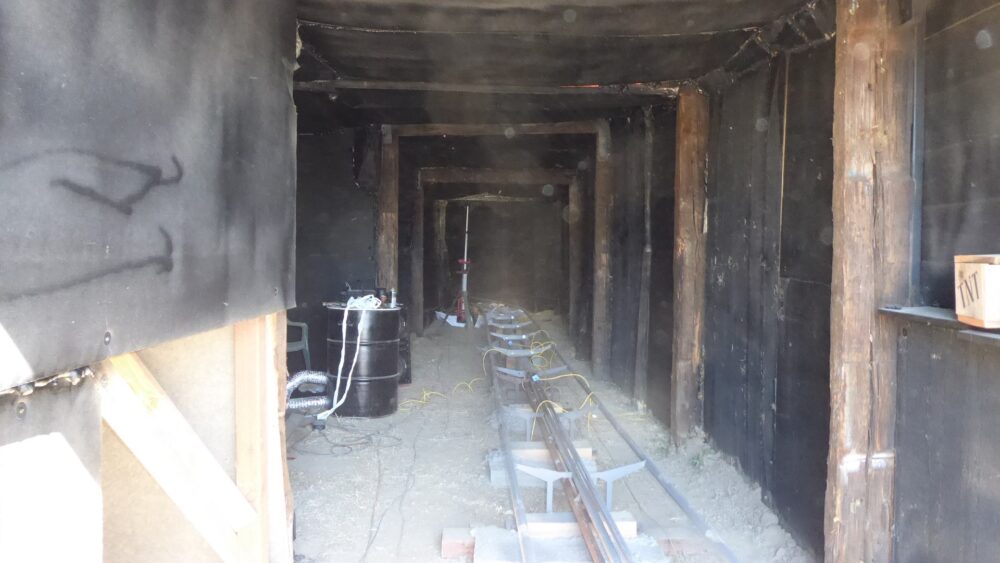 It wasn’t quite ready when I rode it, but an animatronic (built by Cat Alvord who helped out a ton on the project, check out her animatronic work on Youtube) at that point interacts with you. Oh, and this whole time you’re carrying a pistol with an IR LED on it. At this point you shoot a lamp with the pistol. That sets off a box of TNT that starts the launch sequence. Lighting, smoke, and sound effects. A pair of doors blast open open, and boom. You’re launched out of the cave through the rest of the track. 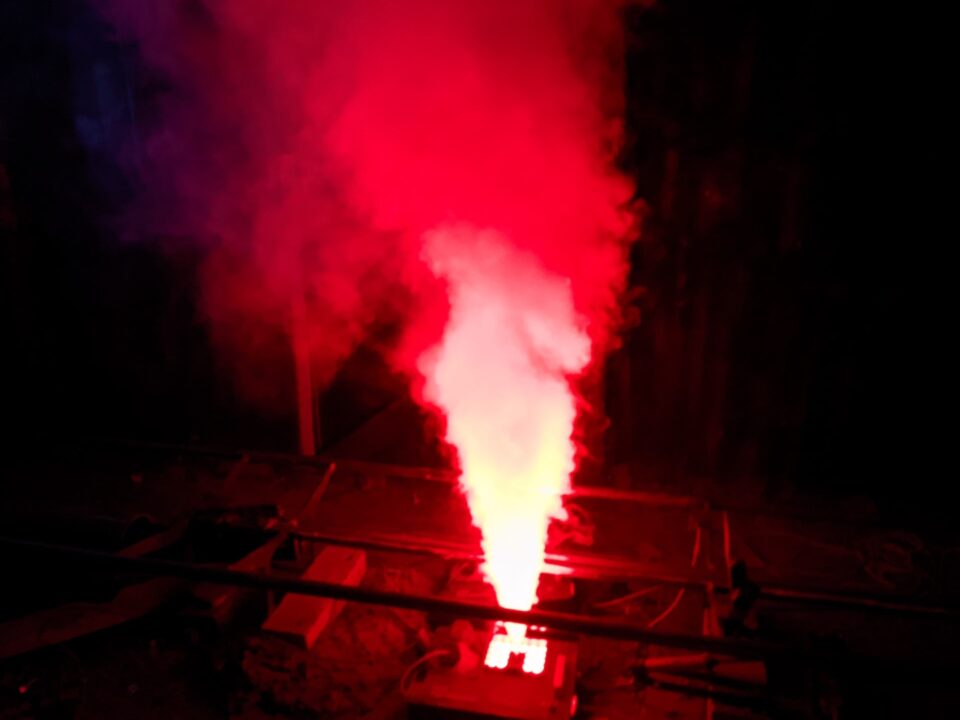 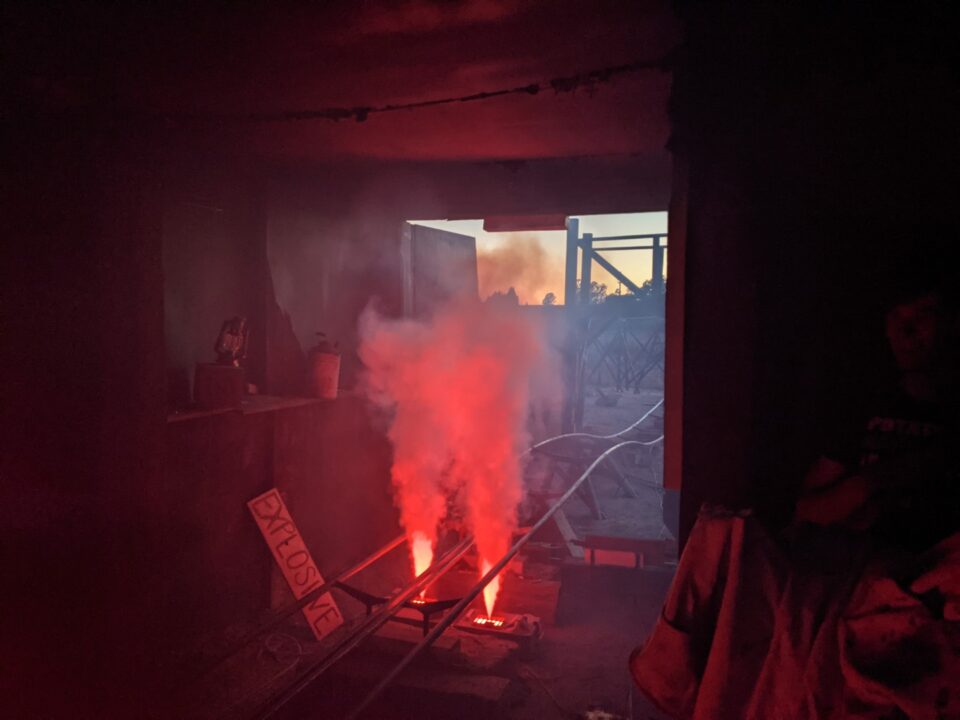 Smoke and lighting take the launch to a whole different level.

The launch is very very thrilling, reaching upwards of 25 mph (which is a lot in a tiny homemade roller coaster car!). But the pitch black tunnel, flashing lights and smoke, and the interactive element take it all to another level.

A Backyard Coaster Unlike Any Other

I’m impressed by any backyard roller coaster I see photos and videos of, but Little Thunder really is something different. 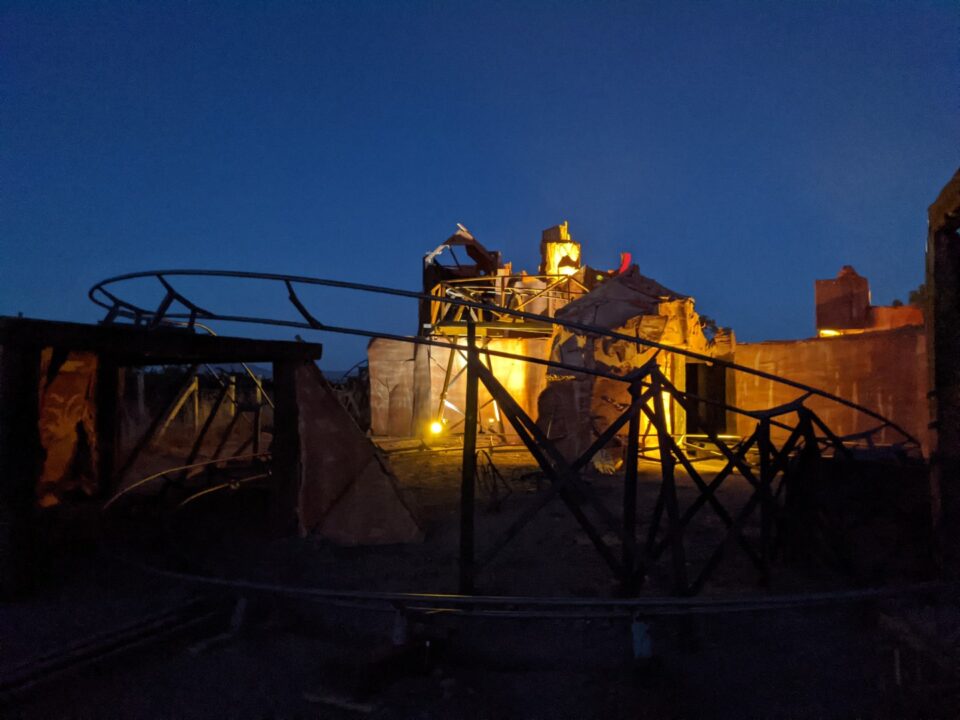 And Sean and his family, along with dozens of volunteers, built it all over just a few months. Amazing. 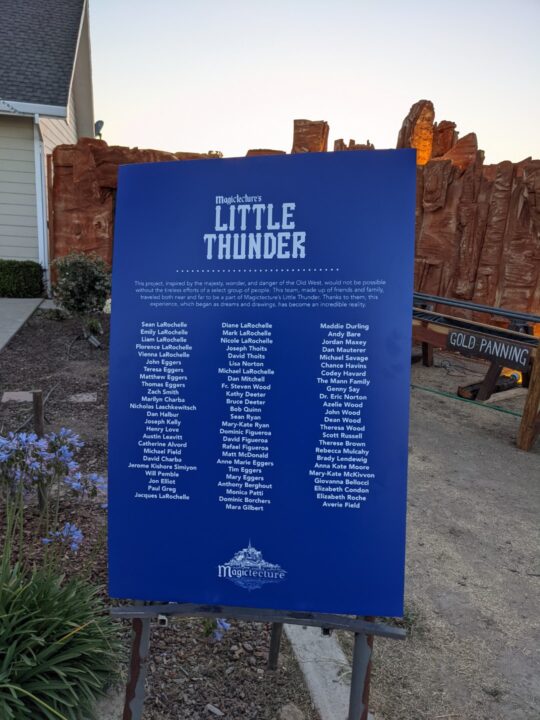 The list of volunteers and patreon supporters for Little Thunder.

If you want to learn more about the project, subscribe to Magictecture on Youtube. Sean posted a bunch of fantastic behind the scenes videos, as well as several detailing their approach to making rides. If you’re as impressed by their work as I am, you should also support them on Patreon.

I’m not sure how much longer Little Thunder will be up, so I’m very thankful I got a chance to ride it. They designed the track in segments to make it disassemble-able and shippable, so it could move to the East Coast where Sean normally lives. 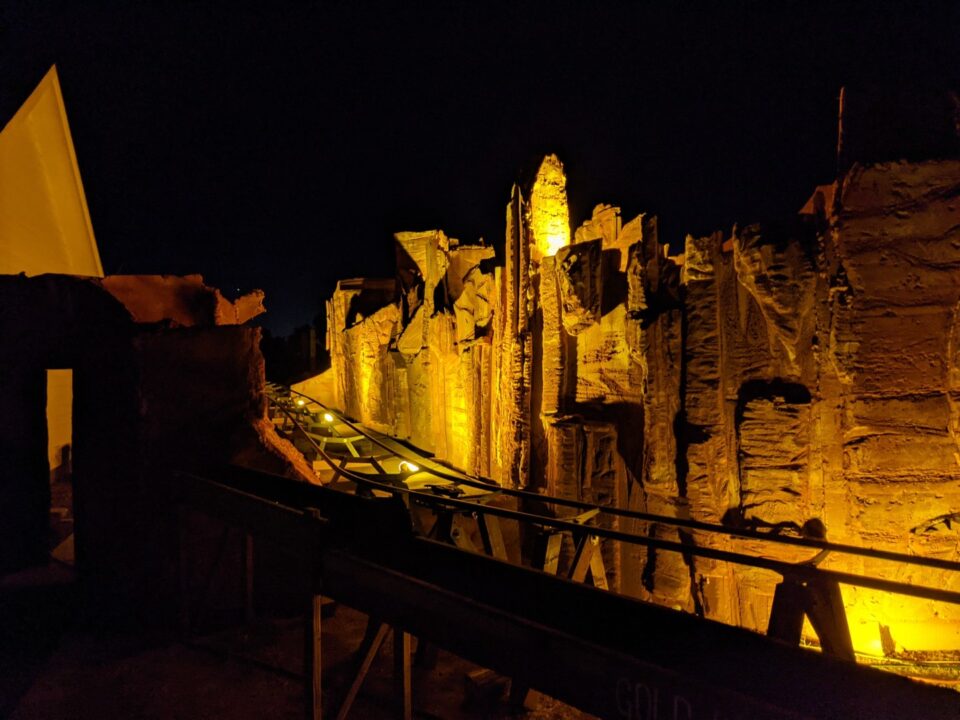 But, he and his brother have ideas for other projects they want to work on. That means recycling as much of the wood and steel as they can to save on the cost.

Of course, they’ve also gotten attention from a lot of people. That includes people from Imagineering, and famous former Imagineer Bob Gurr, so maybe their next project will be with Disney!

If you’ve got more questions about Little Thunder, post them in the comments below. We’ll do our best to answer, or reach out to Sean to get the answers. You should also check out our interview with Paul Gregg from a few years ago about designing safe backyard coasters. Paul’s book and advice helped Sean and Michael out a ton on Little Thunder, so that’s a great place to start if you want to learn more about backyard coaster building!