Coney Island is one of America’s classic amusement park locations, and is likely one of the only parks known by reputation alone to the majority of people, enthusiasts or not. During my first visit to the park this September, I experienced most of the major coasters, except for the spinning coaster, The Tickler. 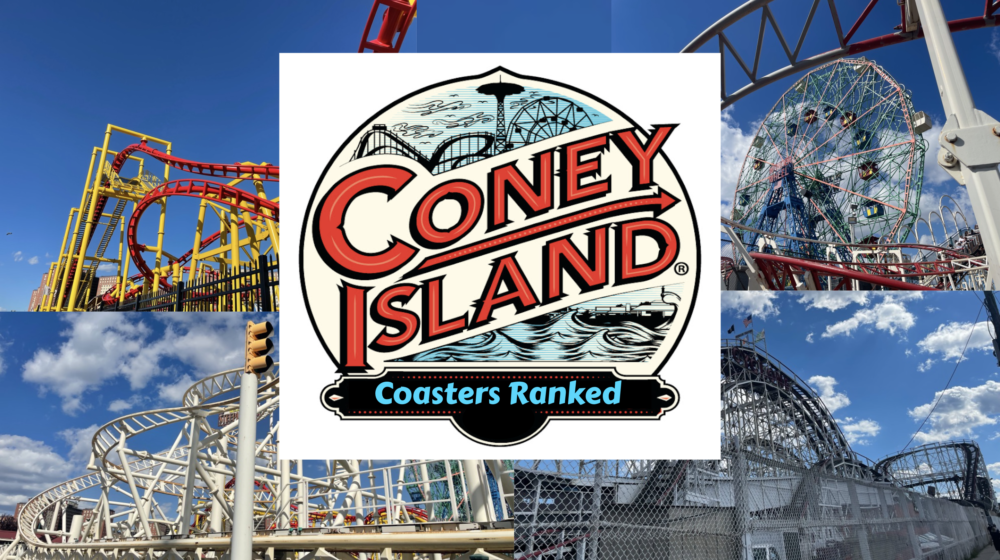 This list will also include the new for 2021 Phoenix, located at Deno’s Wonder Wheel park, which is right in the middle of Luna Park. Phoenix is a separately ticketed attraction, and Deno’s is a separate park from Luna Park, but since they share the boardwalk and most coaster enthusiasts will undoubtedly visit Deno’s as well, it’s included on the list. So without further ado, here is my personal ranking of the coasters at Coney Island. 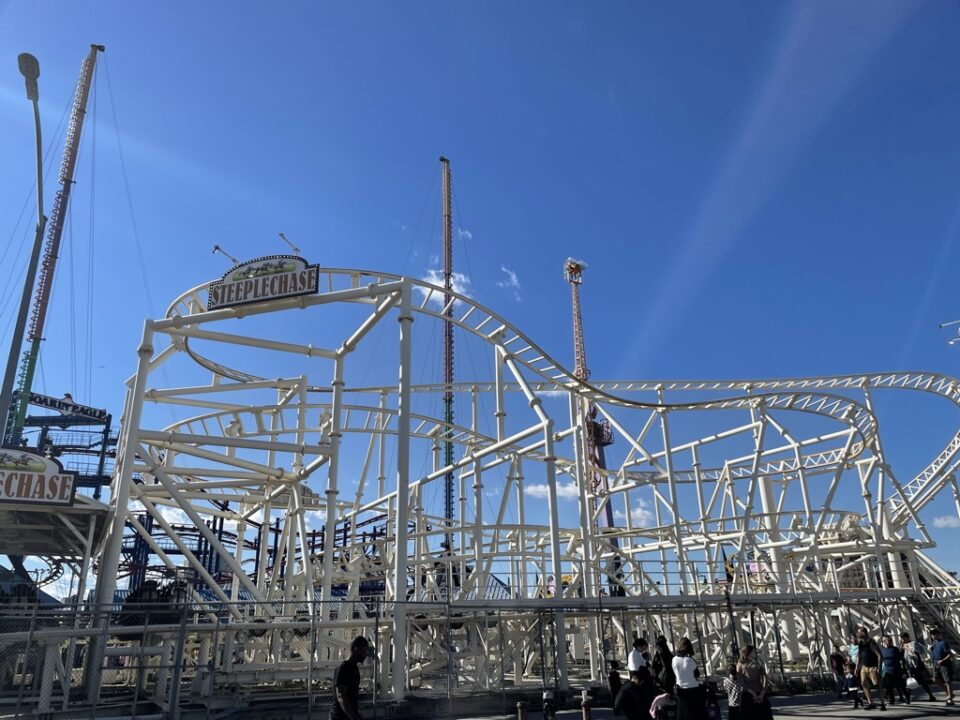 As the only launched coaster at Coney Island, Steeplechase has the uniqueness factor, as well as the motorbike style seats, themed to race horses in this case. The launch on Steeplechase is a lot of fun, and feels great with the motorbike seats, it’s a great thrilling start to the ride, and the quick turn after the launch is very tight and offers some great forces. 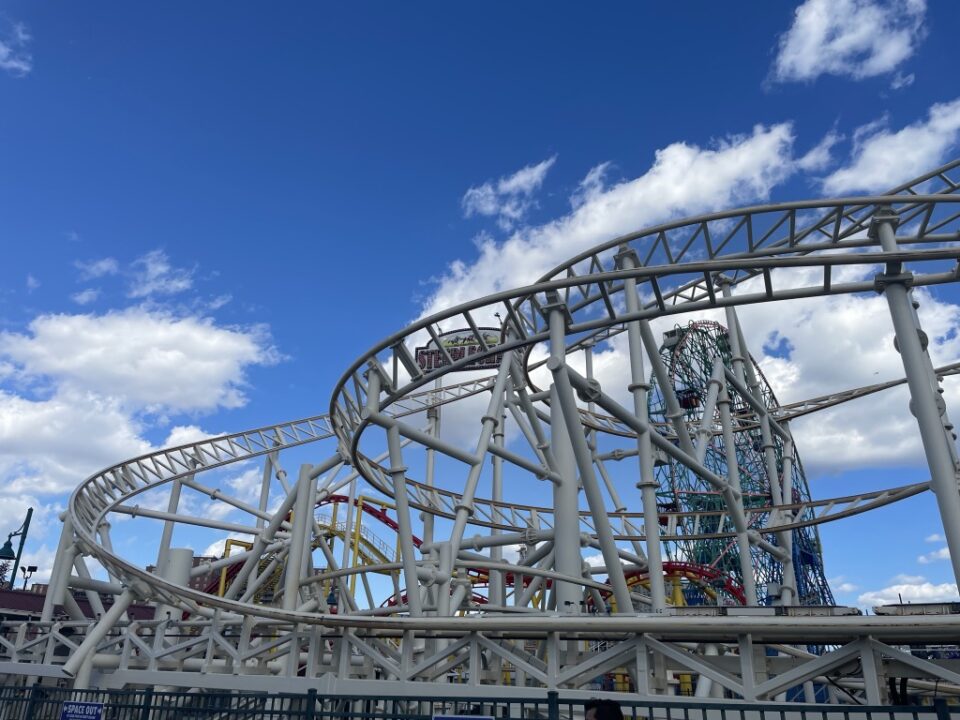 After the initial turn though, the intensity is not kept up, which is why this ride comes in last on our list. The rest of the ride is not uncomfortable or a bad layout, it just never quite matches the thrill of its initial launch. There are actually some very fun, quick turns in the layout similar to an Intamin design, and they make great use of the seat style, but the ride just feels like it’s losing steam throughout the fairly quick experience, lasting around 30 seconds from launch to brake run. 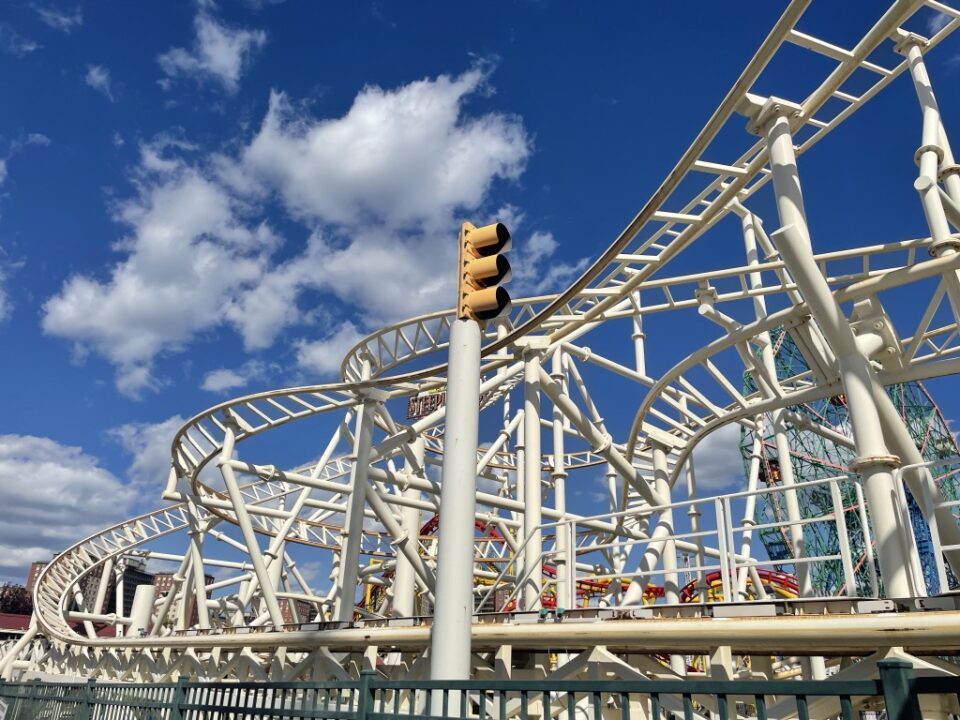 Steeplechase is a fun and unique coaster that rounds out Luna Park’s surprisingly diverse coaster lineup, but there’s not quite enough horsepower to have competition with the other rides. 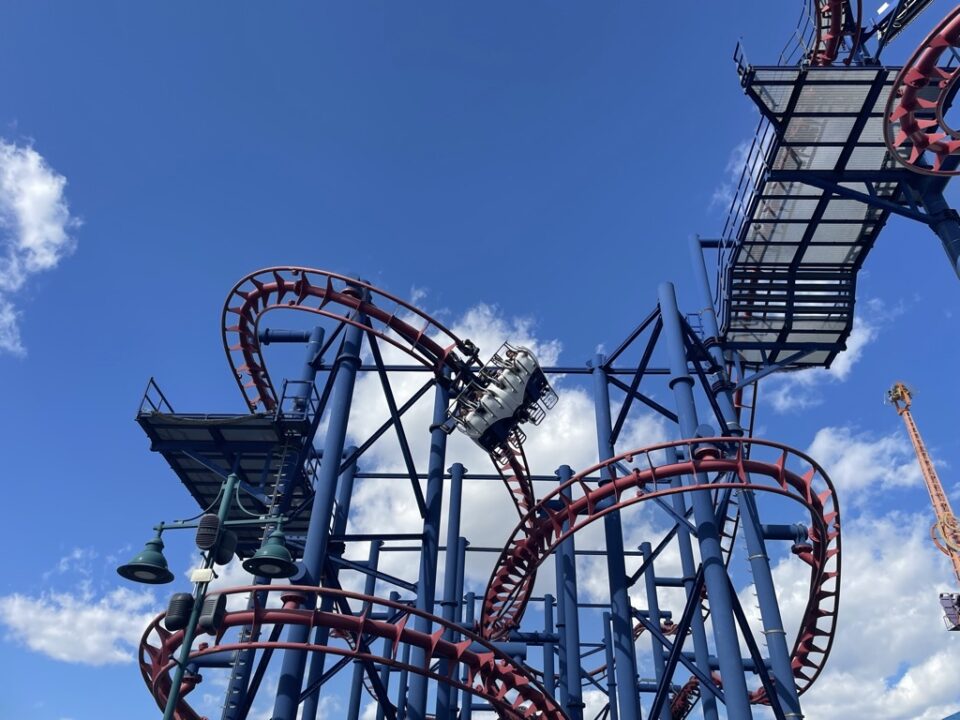 Before riding this ride, I would’ve guessed that this version of the infamous Zamperla Volare model would be the last ride on my list, but I was pleasantly surprised with how much I liked this ride. Yes, the restraints are definitely not the most comfortable, but aside from a few rough turns, this is a very whippy and intense ride. 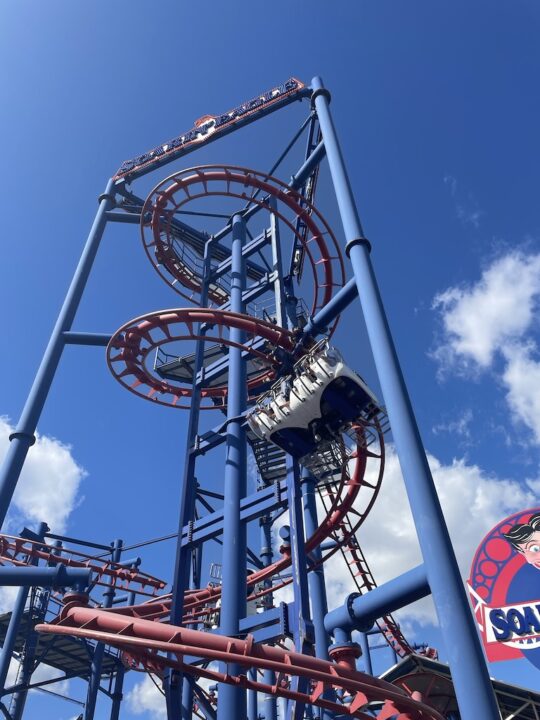 The standout elements on Soarin’ Eagle are without a doubt the two inversions. The feeling of having a non-invasive restraint on your back while in a flying position and taking two extremely compact inversions is genuinely thrilling, and provides some excellent forces. 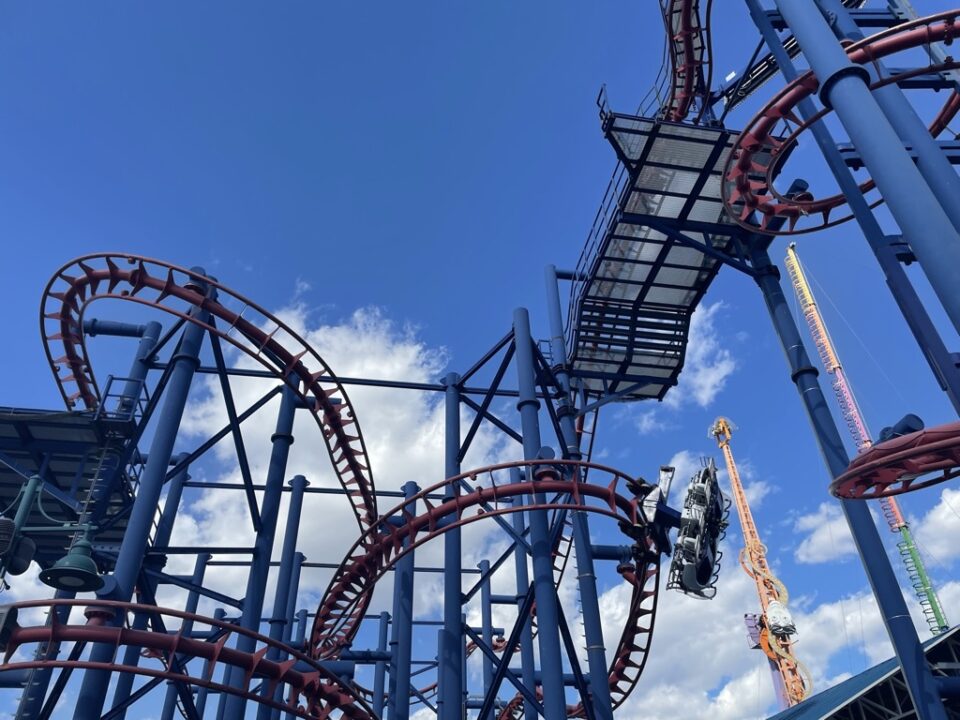 The twisted lift hill is also very unique, and builds up great tension as you ascend the tower. The trains on this coaster are bizarre as well, and took me a few tries to figure out how to properly be secured, but once I understood it, it wasn’t as uncomfortable as I had anticipated. 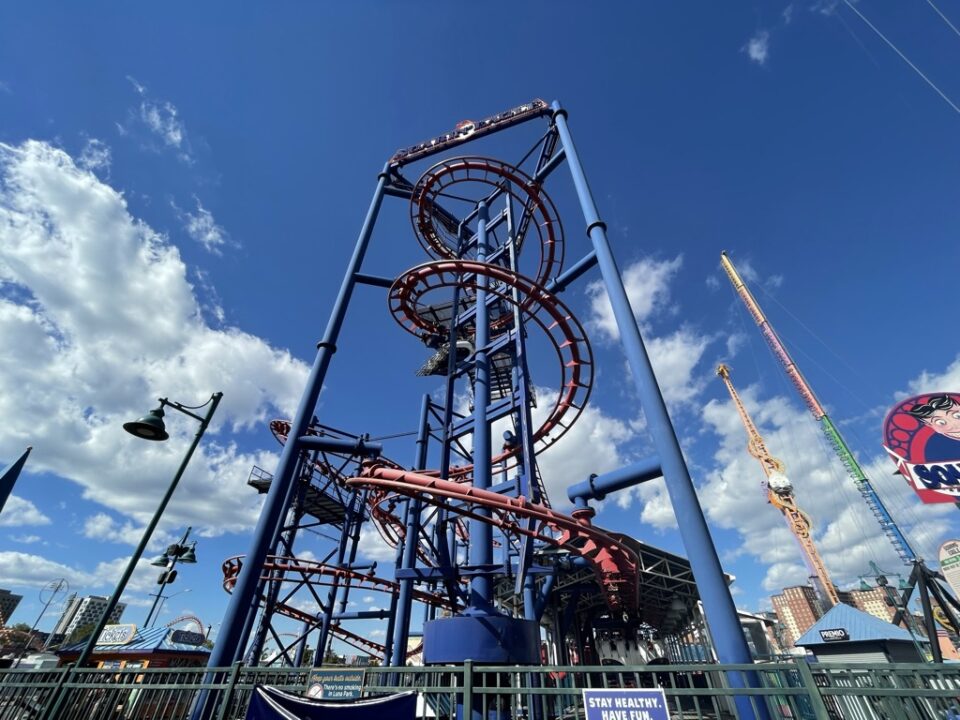 I’m positive there is nothing like the sensations on Soarin’ Eagle on any other coaster I have experienced, and for that reason it made enough of an impression to land at number four on our list. 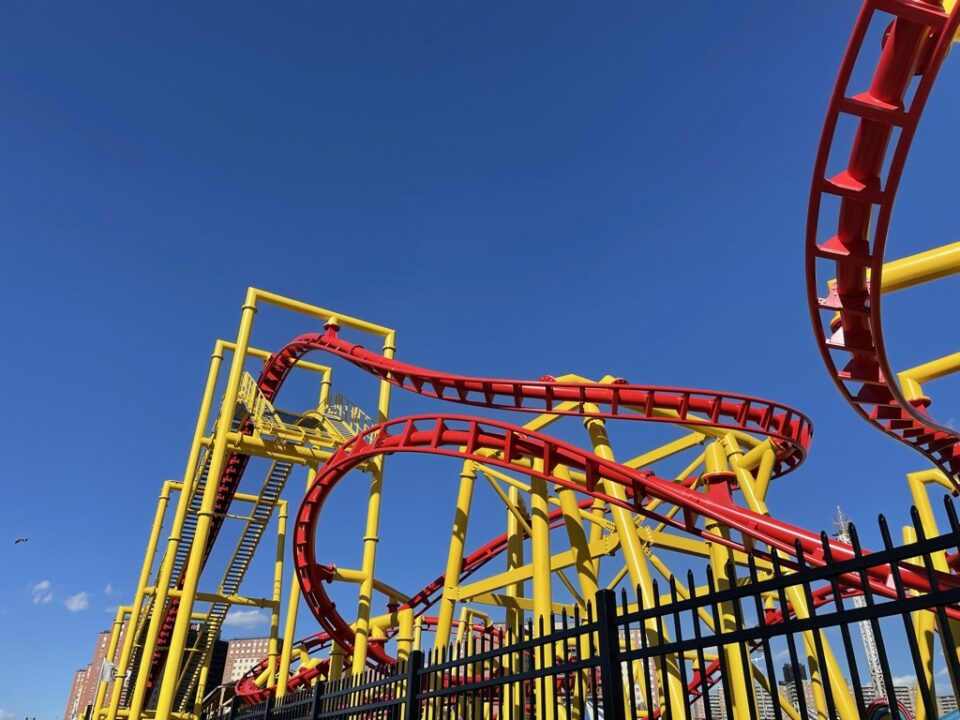 One of the few new-for-2021 coasters takes the number three spot in the rankings, and that is Phoenix at Deno’s Wonder Wheel. The Vekoma family suspended coaster is a “wonder”ful addition to Coney Island (sorry about that) and the colorful paint job makes it stand out visually as well. 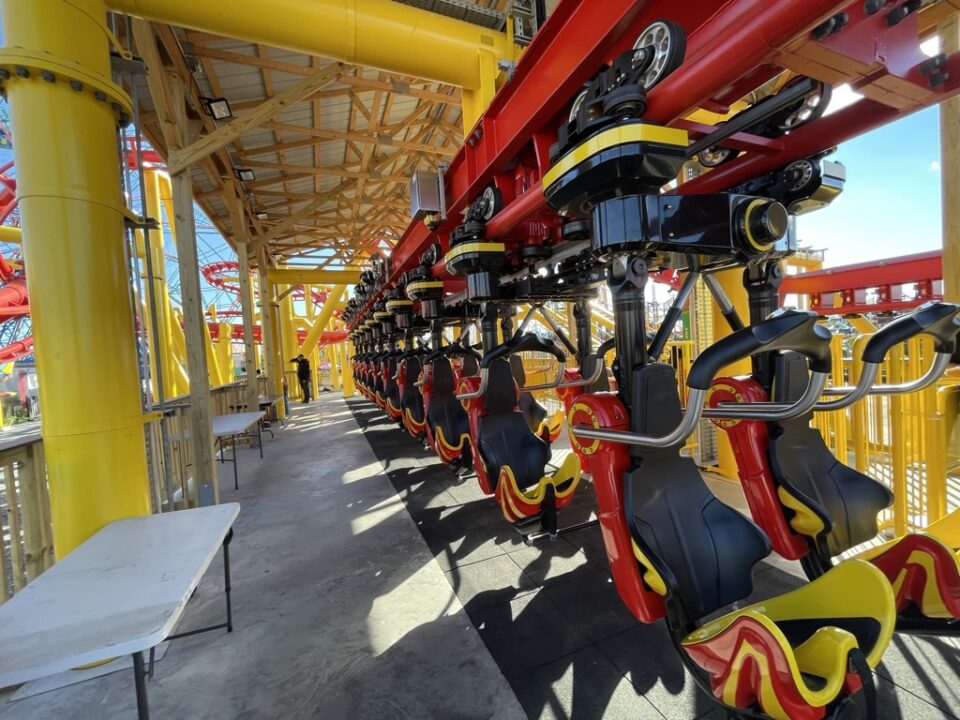 The ride was incredibly smooth, and there are some surprisingly intense elements on this coaster, although nothing too extreme for a family coaster. I believe this is a perfect transition coaster from the kiddie coasters to the wilder offerings, and will have something for everyone in the family to enjoy. 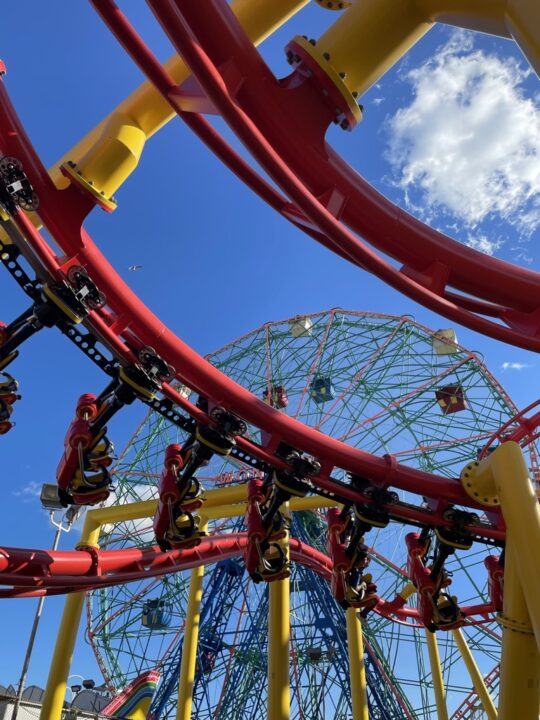 I figured that the back row would be my preferred experience for the whip and the tight turns, but the front row ended up being my favorite. The incredibly comfortable and minimal restraints may have added to this, but the ride felt much faster in the front row, and getting an up-close and personal view of the brand new Vekoma track just added to the experience. 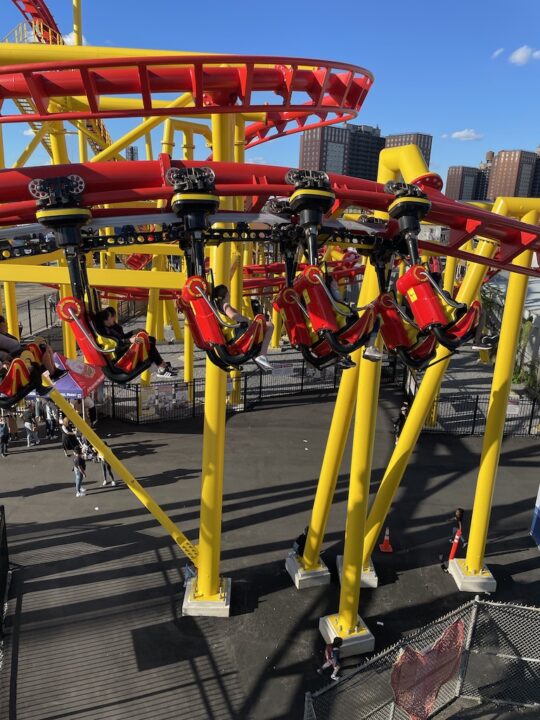 Phoenix’s smooth layout and moments of intensity make it a solid entry for the middle of our list. 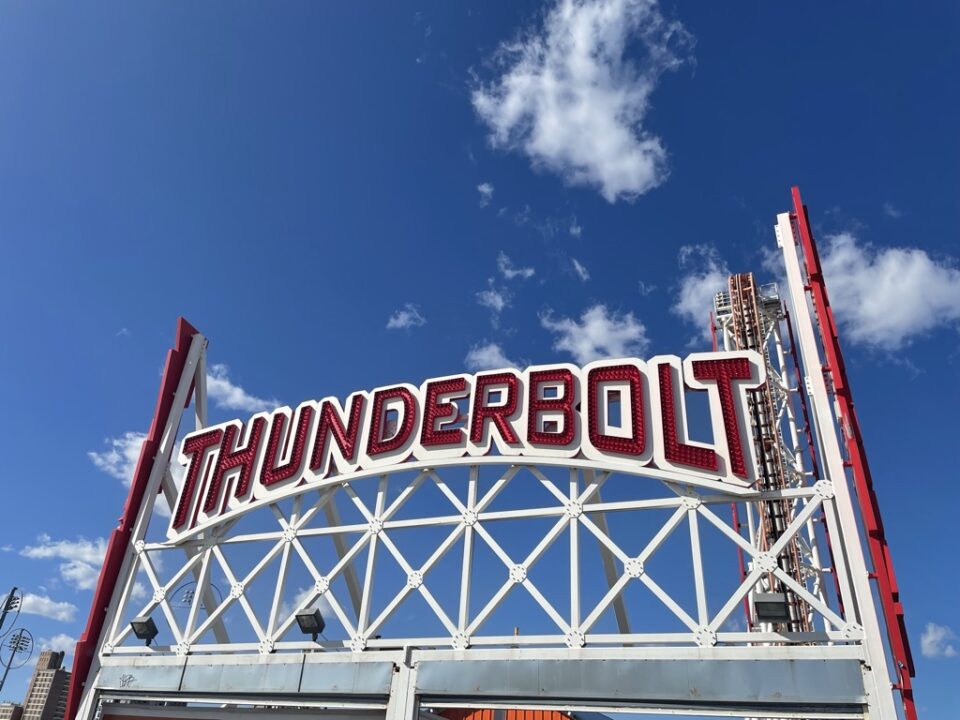 Thunderbolt has built up a bit of a reputation for being a rougher ride since it opened in 2014, and that reputation is certainly earned, so the question becomes: why is Thunderbolt in the number two spot on this list? Well, because of these few moments right here: 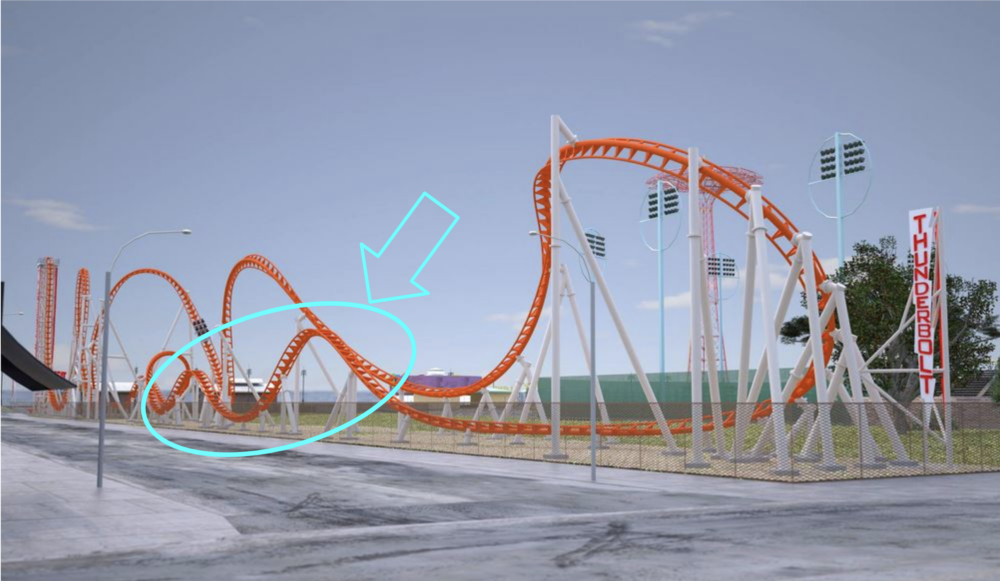 Concept art from our construction article

Simply put, Thunderbolt’s airtime hills are far and away the most violent ejector airtime I have ever felt. And this is coming from someone whose favorite coasters include Intimidator 305, Skyrush, and Twisted Timbers. When I rode Twisted Timbers back in July, I felt convinced that it would be a while before the “strongest airtime” award was taken from the RMC creation, but I guess I was not prepared for what Zamperla had to offer. The very first airtime hill and the hill immediately following were the stars of the show for the entire day. There is even an off-axis airtime hill right before entering the station. 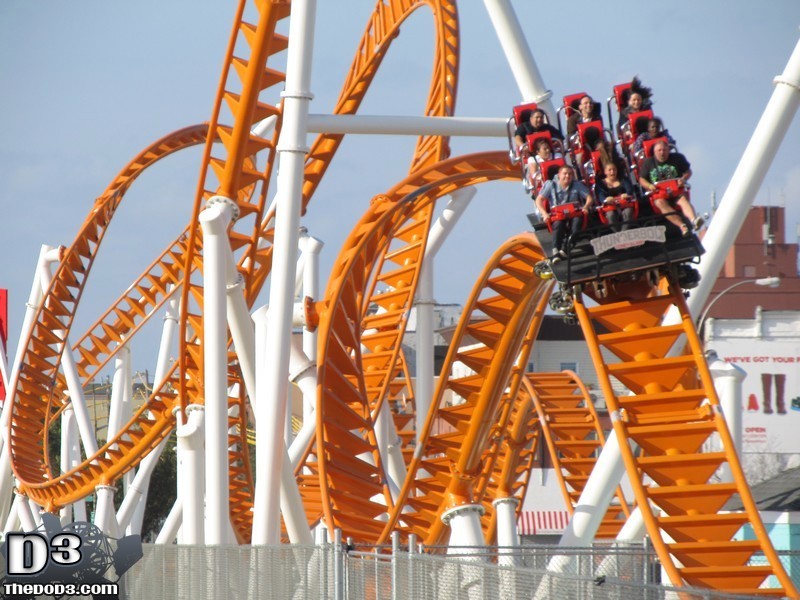 Make no mistake, everything preceding these few hills, especially the inversions, are very rough. The vertical loop has some great hang time though, and a 90 degree lift hill will always be intimidating for me. The wave turn-esque element was also interesting, but didn’t really provide many forces, good or bad. 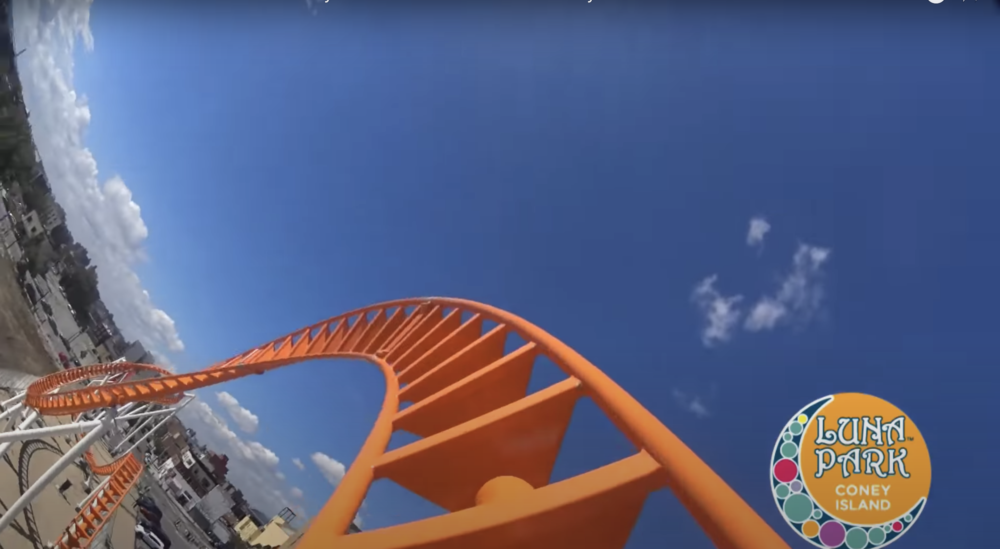 The trains are part of the reason that the airtime on Thunderbolt is so monstrous, they are unlike any other ride vehicle I’ve been in. There is a lap bar with what appears to be a comfort collar attached, but in reality it is just two seat belts that attach to the shoulder area. These seat belts did not tighten all that much, so I had room in between my shoulders and the seatbelts, so I was thrown up into the seatbelts on every hill. It also felt like there was a good five inches of wheel gap in between the train and the tracks, even though I’m sure that’s not actually the case. 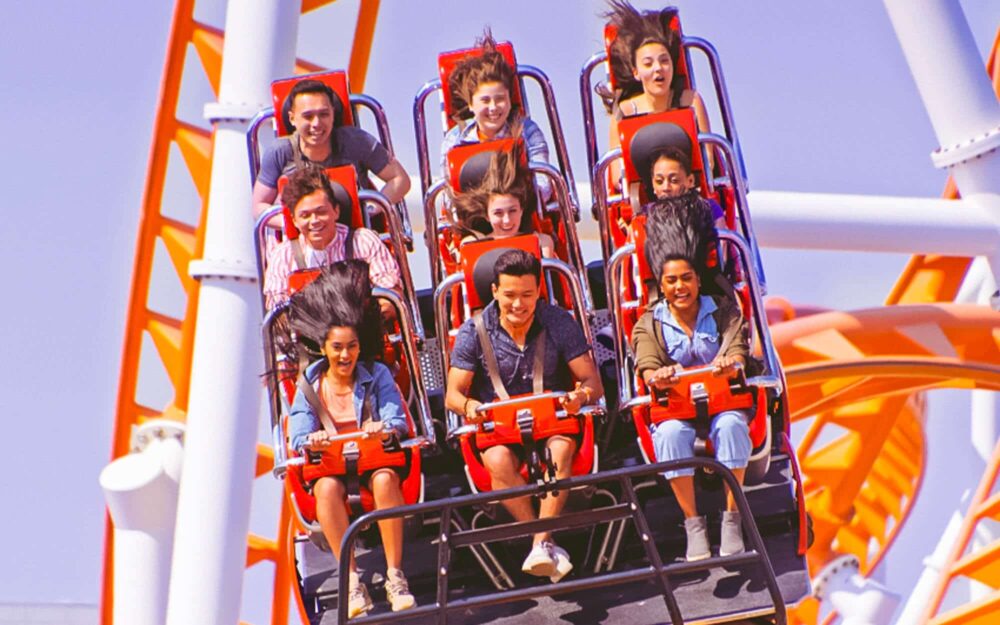 So, while not exactly comfortable, the absolute shock that was the incredibly violent airtime earns Thunderbolt the silver medal in our ranking. 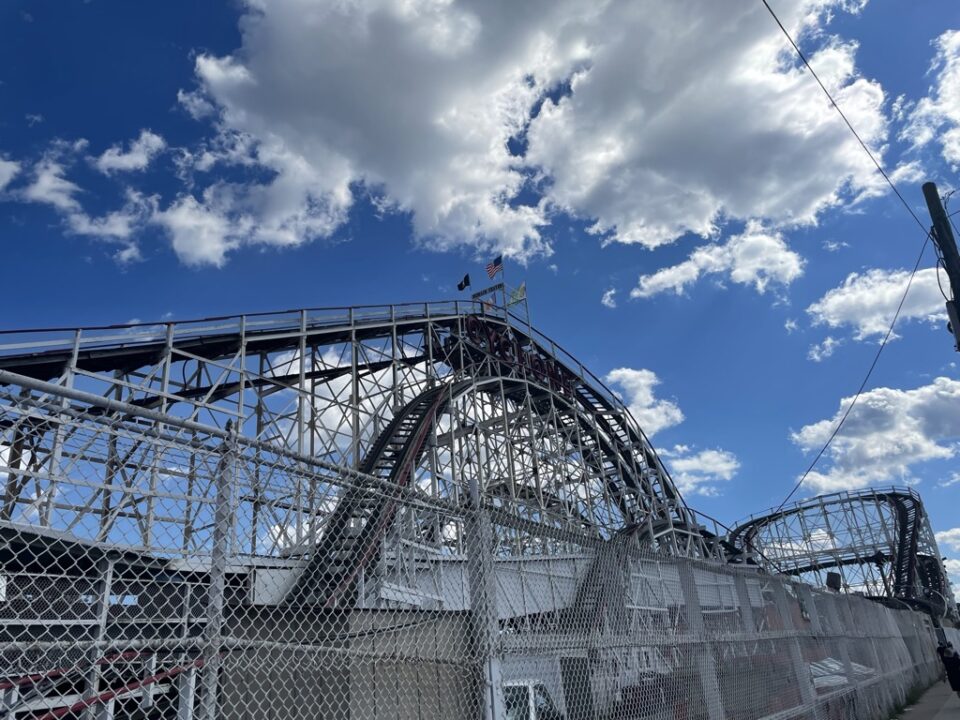 The top spot on our list goes to the coaster that is likely the most famous in the world, the classic Cyclone. I was curious how this nearly century-old coaster would hold up against some of my other favorite wooden coasters, and I’m happy to say it holds up fantastically. The charm of the coaster and the relatively minimal restraints were just the beginning, and as the trains were dispatched manually from the station, I knew I was in for a treat. 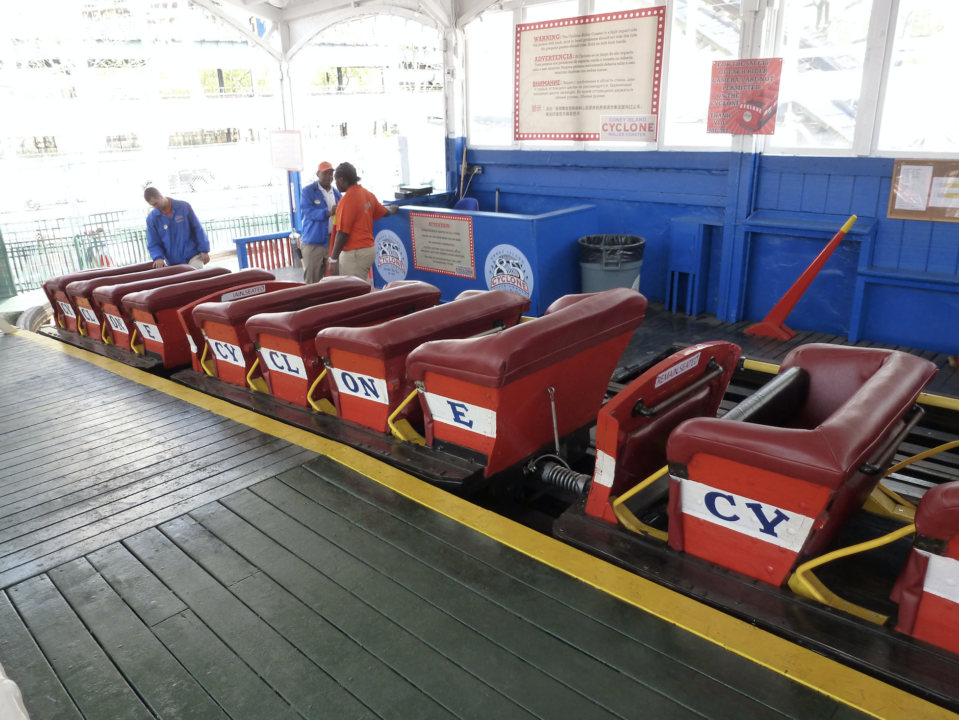 The lift hill faces directly towards the beach, which offers great views as you plummet down the first drop and into a turnaround with surprisingly great lateral forces. The aspect I was most impressed with about Cyclone was how good it kept up speed. The coaster reaches 60 miles per hour, and you definitely feel it. I can only imagine how thrilling this must’ve been when it first opened decades ago, such speed was unprecedented, most cars of the time couldn’t even go that fast.

The airtime on this coaster also holds up very well, and was very strong on most of the hills. Sure, there are a few hills that are a bit forceless, but they are in the minority. The rest of the ride is a great time and definitely worth the price of a wristband just to take multiple laps on this Coney Island classic. 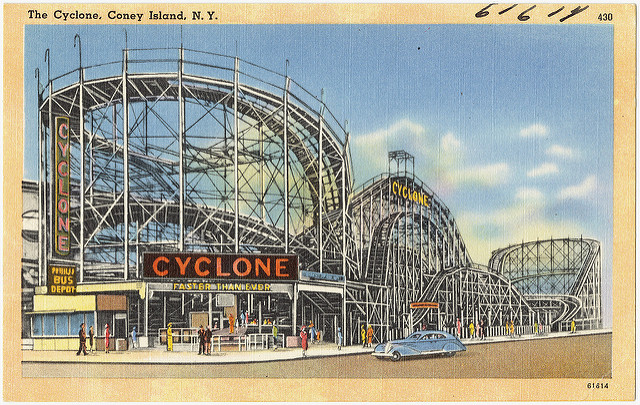 So that’s our list for the top five coasters at Coney Island. Have you been to this classic boardwalk park? If so, let us know your ranking in the comments below!