When people think of Central Florida theme parks, there is (deservedly) a lot of focus on the Orlando area. However, what many people don’t consider while generalizing “Central Florida Theme Parks,” is actually located an hour-ish southwest of Orlando on Interstate 4 (ironically just a few minutes from the questionably-located University of South Florida): Busch Gardens Tampa Bay. As of 2021, Busch Gardens Tampa will have more operating roller coasters (10) within the single park’s boundaries than both Universal Orlando parks combined (9), as well as all four of Walt Disney World’s parks combined (somewhere between 7-9? TBD). 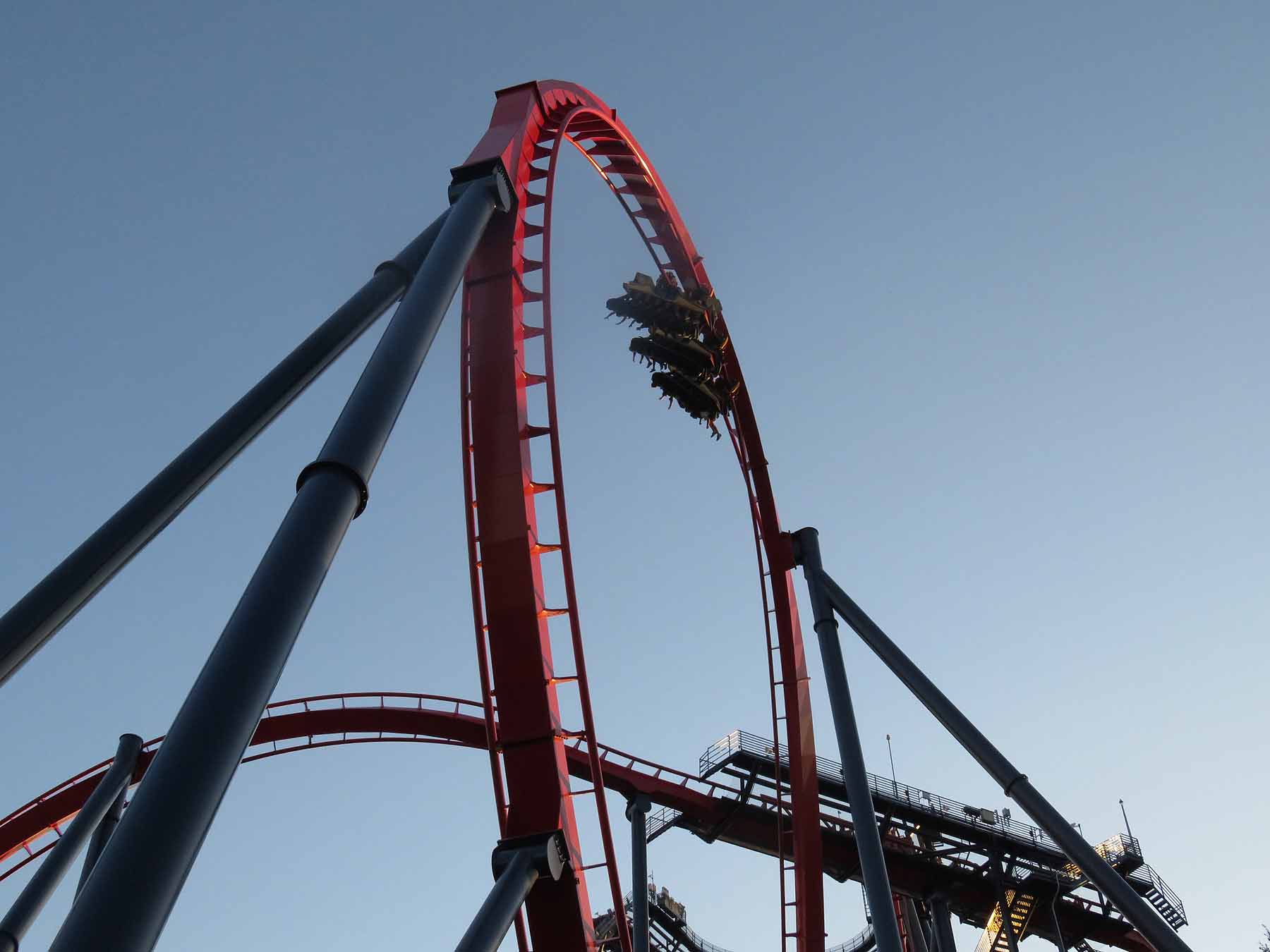 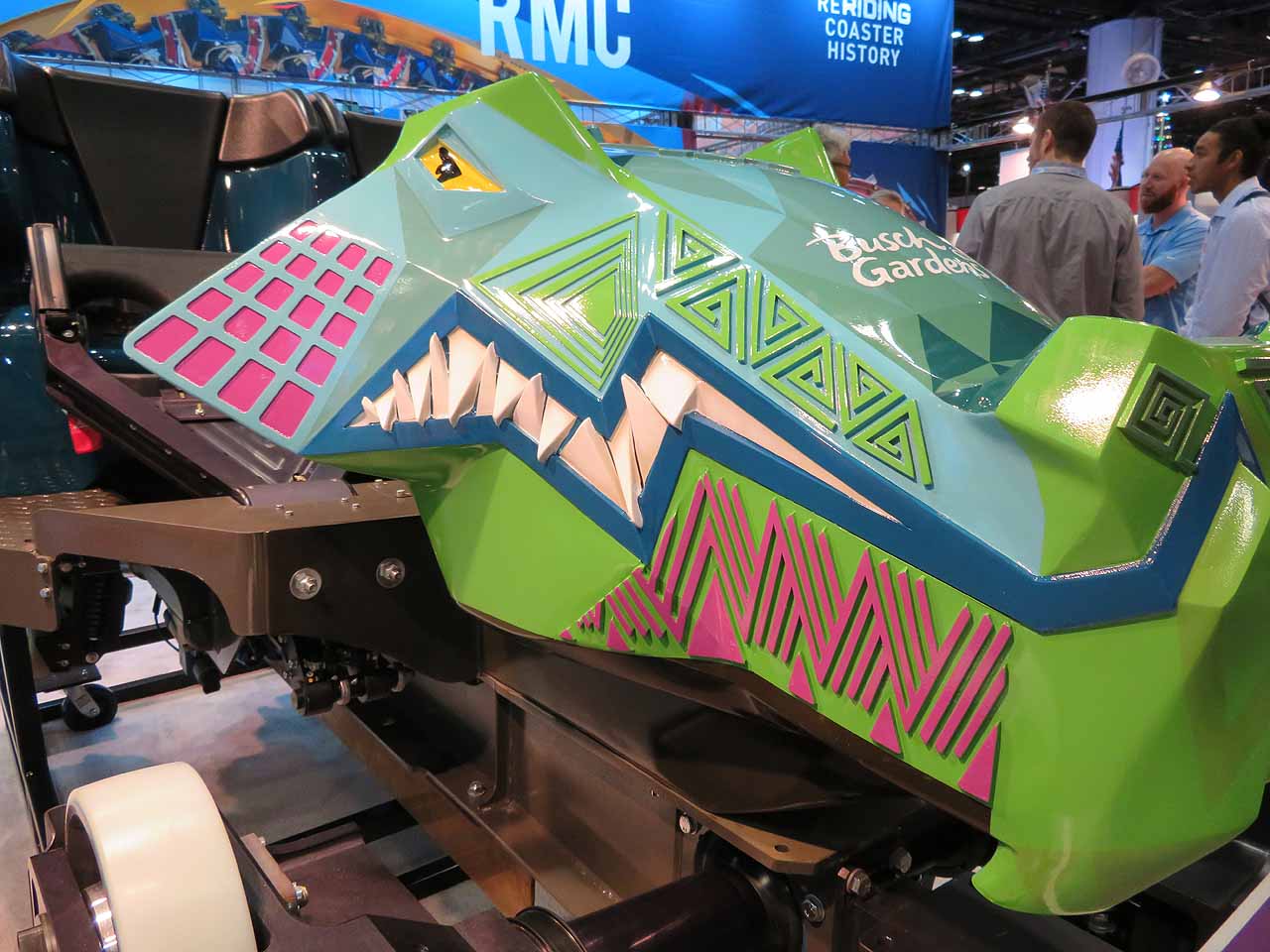 If you’re confused,  we’re going to spell it out for you by attempting to create the natural progression of each of the park’s roller coasters, so that even if someone is a “coaster chicken,” they’ll know the level of roller coaster they’re comfortable riding. We’ll break the 10 coasters into three “levels:” Thrill Seekers In Training, Thrill Seekers, and Thrill Junkies. 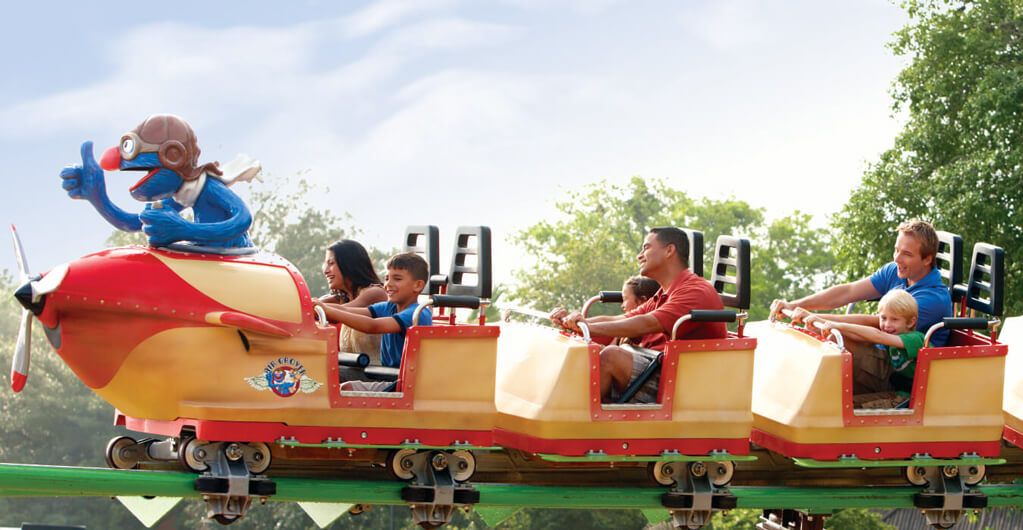 If you’ve read our “Tame to Thrilling” list for the “other” Busch Gardens in Williamsburg, you’ll remember that that list started with Grover’s Alpine Express, which is located in the park’s Sesame Street kids’ area. It would only make sense for this list to also start with a Grover-themed family coaster in the park’s Sesame Street kids’ area, especially since they are the exact same coaster model from Zierer. This coaster is the perfect introduction to roller coasters at Busch Gardens Tampa, and if young riders happen to get too frightened, it will all be over soon, as the track’s length is only 600′ long! 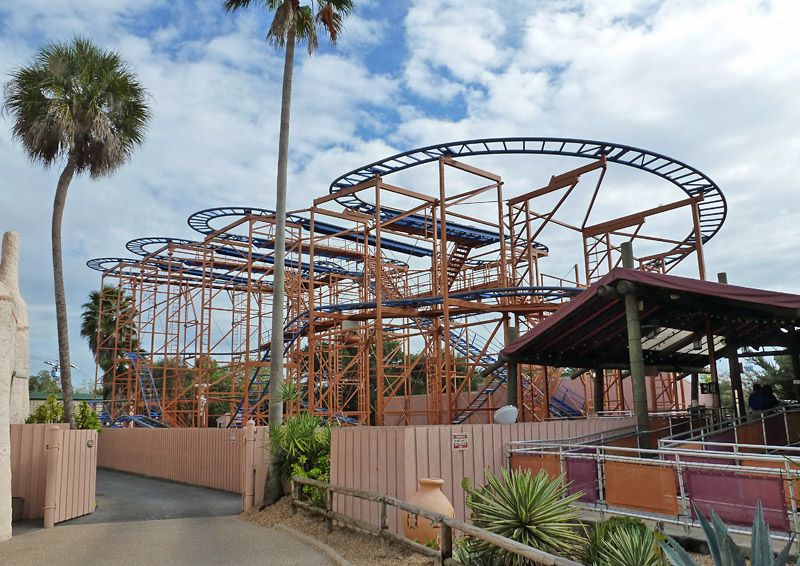 A staple at many amusement parks around the country is a “Wild Mouse”-style roller coaster. The family-friendly Sand Serpent has been operating at Busch Gardens Tampa since 2004, following 8 seasons of operation at Busch Gardens Williamsburg as Wilde Maus. A “compact” model from manufacturer MACK Rides, Sand Serpent tops out at a maximum speed of 28mph, so even the tight serpentine turns won’t be experienced at too fast of a speed. Featuring a height requirement of 46″, those looking for more thrilling attractions in the immediate area of Sand Serpent, look to the nearby skies for the face-down thrills of Falcon’s Fury! 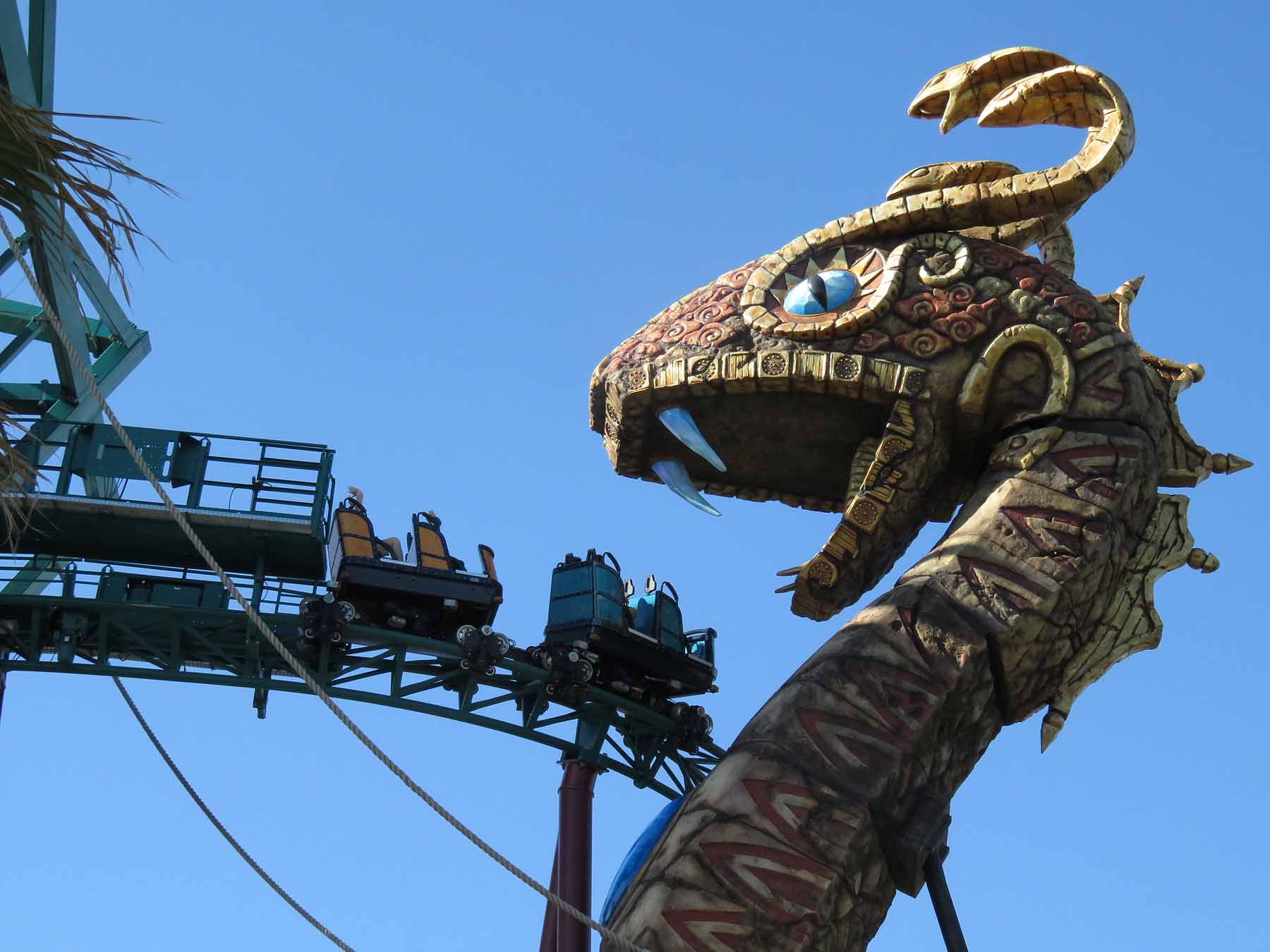 Standing 80′ above Busch Gardens Tampa’s skyline is the snake sculpture of the fictional King Venymyss, who greets riders ascending to the top of Cobra’s Curse’s 70′ tall elevator style lift. The 2016 addition to Busch Gardens Tampa is “technically” a spinning coaster, but for more than half of the ride, the ride vehicles are locked in place, either facing forward or backward (the trains slowly rotate in the mid-course brake run) There are no particularly steep drops, and the top speed is just 40mph. The back half of the ride features some “free-spinning,” which heavily depends on the weight distribution of the riders. Cobra’s Curse is a great coaster to bridge the gap between a family coaster and a major thrill ride. 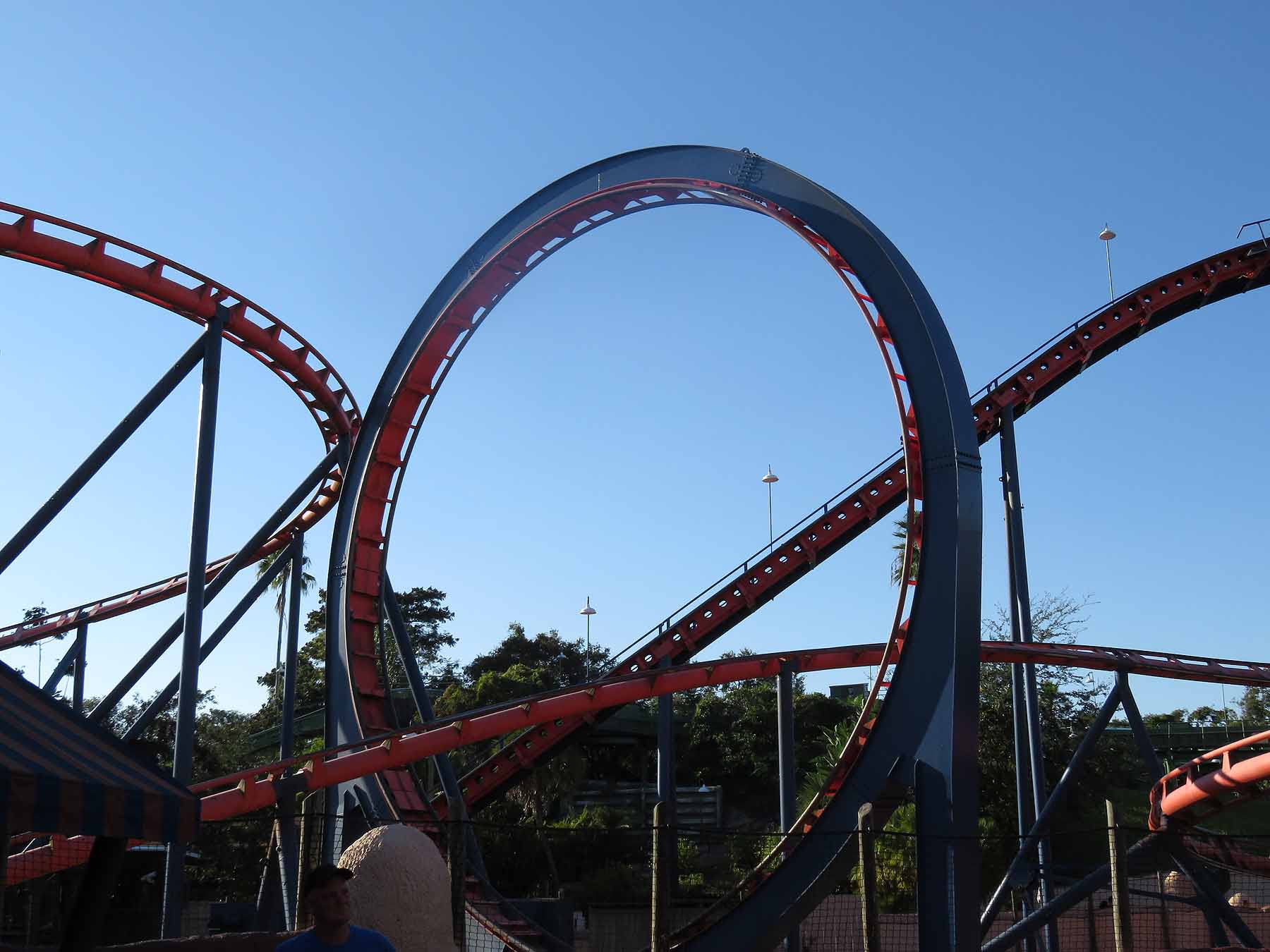 Busch Gardens Tampa’s oldest coaster, and the first one on this list to go upside down, is the classic Schwarzkopf looping coaster, Scorpion. Riders are secured by a lap bar, and reach top speeds of 41 miles per hour before taking on Scorpion’s lone inversion, a nearly-40′ tall vertical loop. The reason this is ranked slightly higher than Cobra’s Curse is the inversion, as well as the coaster’s age, resulting in a slightly more terrifying ride experience than the smooth curves of Cobra’s Curse. For historians, Scorpion is one of only a handful of operating Schwarzkopf coasters that remain in the United States, and still provides a great ride, 40 years after it originally opened. 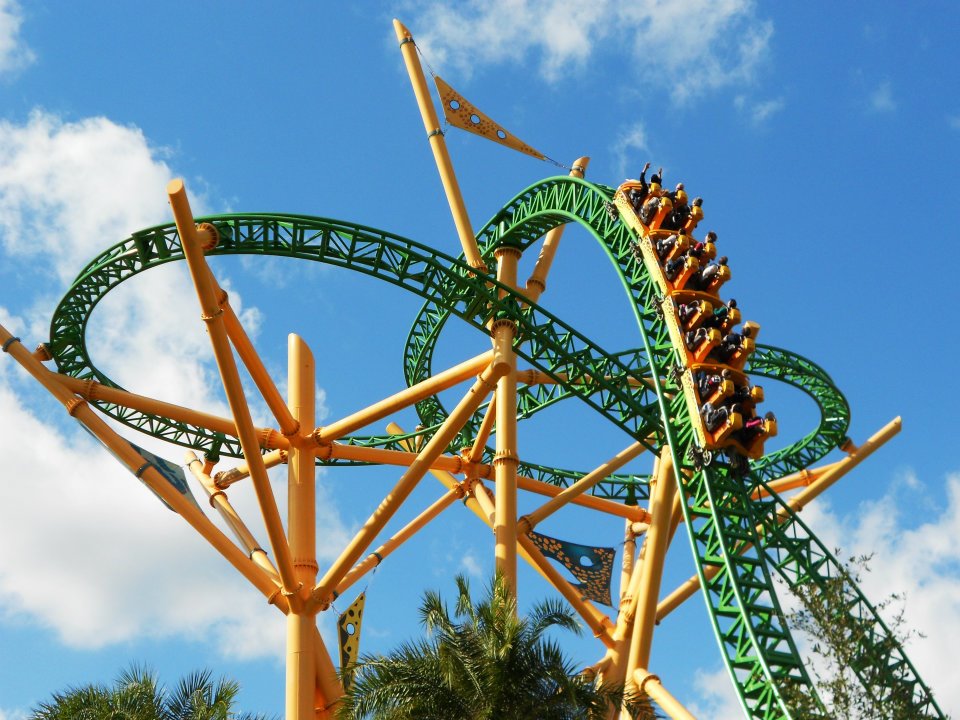 For an Intamin Blitz Coaster to rank right in the middle of this list, doesn’t make Cheetah Hunt a “lesser” ride than anything you’ll find further down in this article, it just speaks to the coaster’s accessibility, fun factor, and how it’s a great first “big” coaster for a lot of younger thrill seekers. A very smooth coaster experience, Cheetah Hunt features three launches, a zero-gravity roll and a top speed of 60mph, but with a height requirement of 48″, is also a great coaster for families to ride together. The coaster’s largest drop of 130′ actually takes riders into an underground trench from the top of the 102′ “Windcatcher” Tower before taking off across the Serengeti. 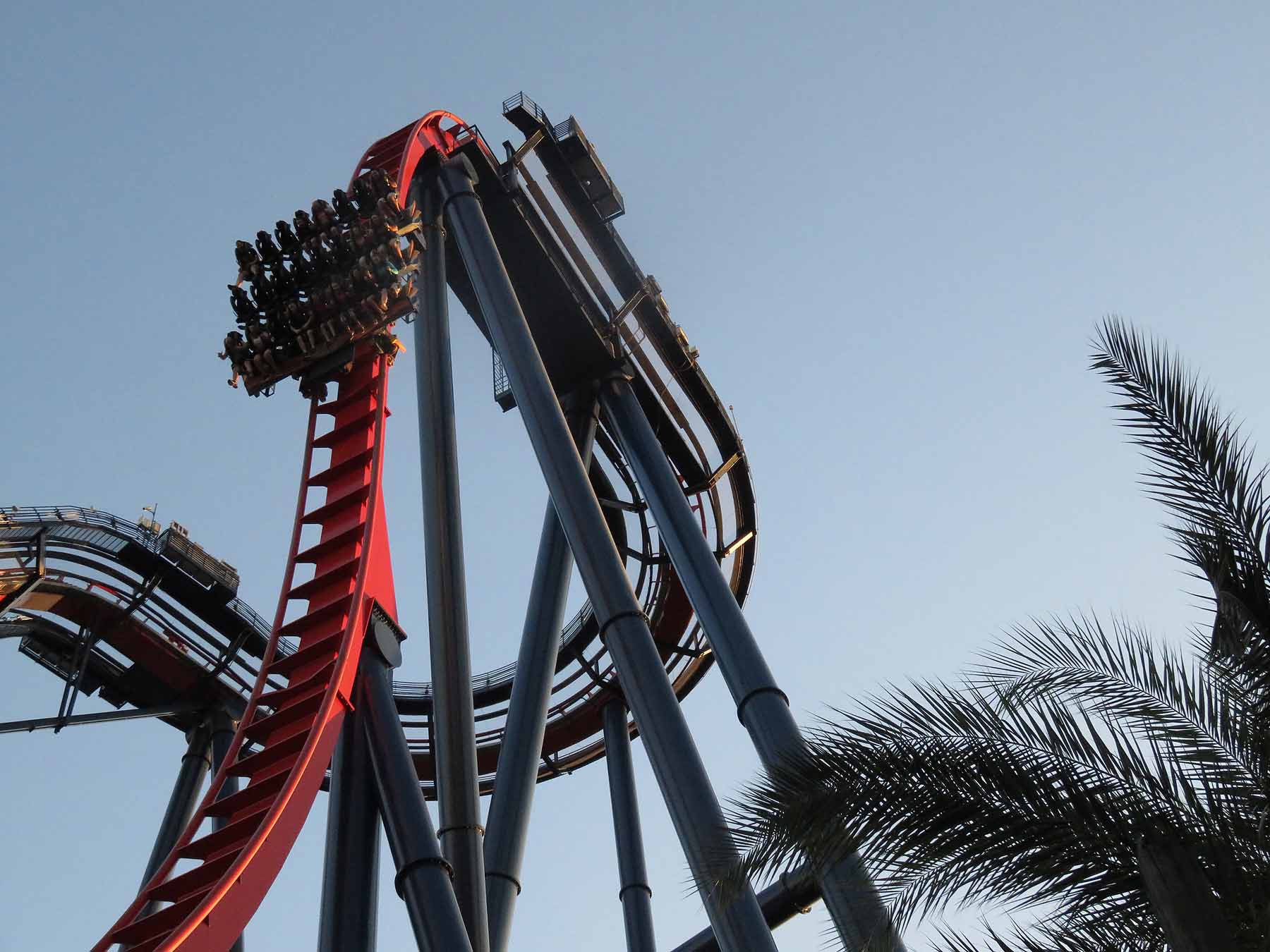 SheiKra gets its name from an Asian-African hawk that is known to dive vertically for its prey, which is a perfect way to describe the coaster’s 200′ tall first drop. As the first Dive Coaster from Bolliger & Mabillard in North America, SheiKra was the tallest, fastest, and longest coaster of its kind when it opened, and was also the first to feature an Immelmann loop as well as a splashdown. Despite its floorless trains and breaking of the 200′ barrier, a ride on Sheikra is a very smooth and enjoyable experience. If you can get past the height, it’s not bad at all! For more thrills, try to get a seat on one of the far right or far left seats, and you’ll truly feel like you are flying! 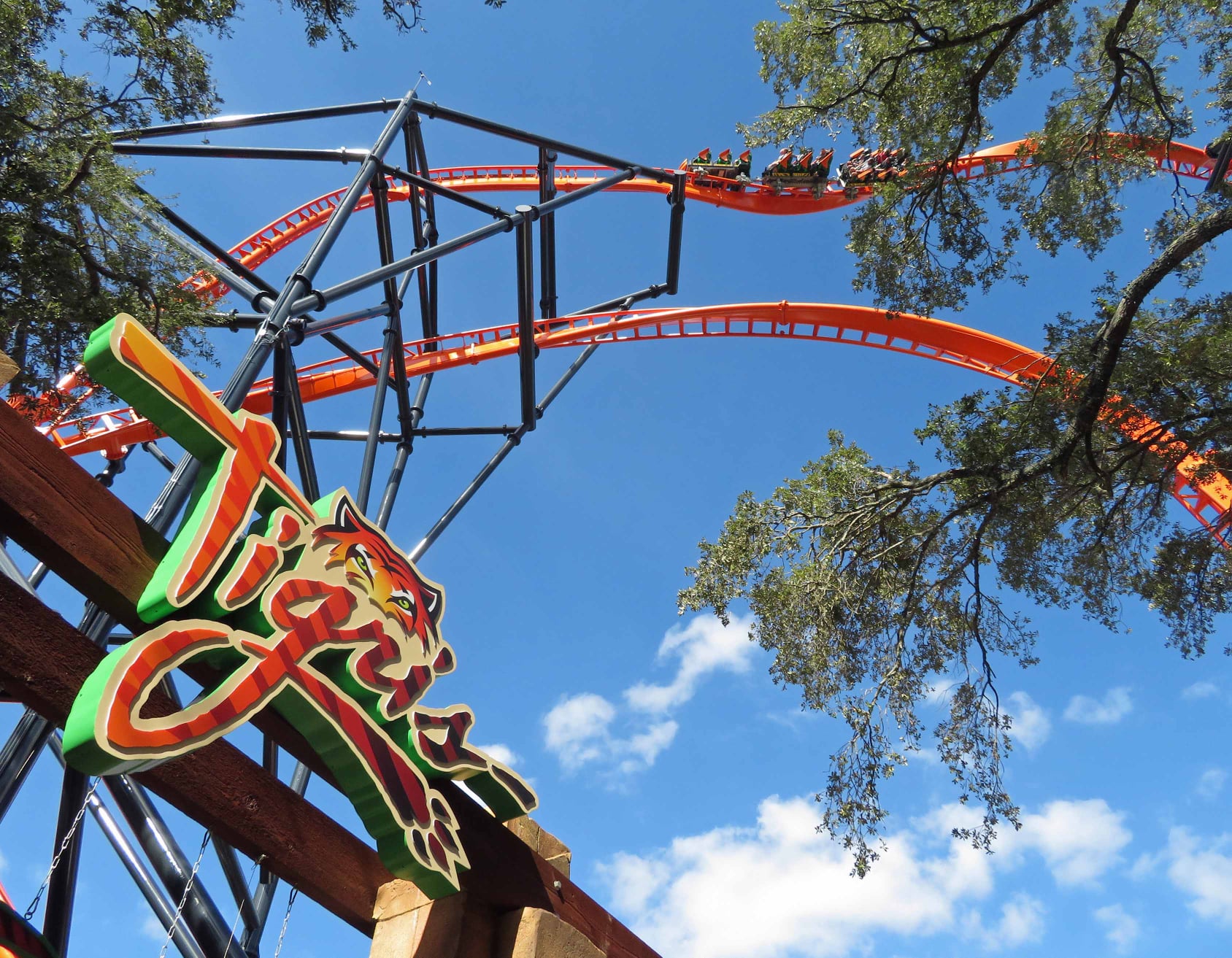 Tigris, which opened in 2019, is a Skyrocket II model from launched coaster specialists Premier Rides. Launching riders forwards, backwards, and forwards again out of the station at speeds reaching 62mph, the train ascends at a vertical angle to heights of 150′ before taking a painstakingly slow zero-G roll at the top, and diving back down to earth by way of a non-inverting loop. The ride is over in a matter of seconds, so fast that if you’re not ready for it, it may be over before you even think it begins. Each seat on Tigris provides a different experience, so we recommend riding more than once! 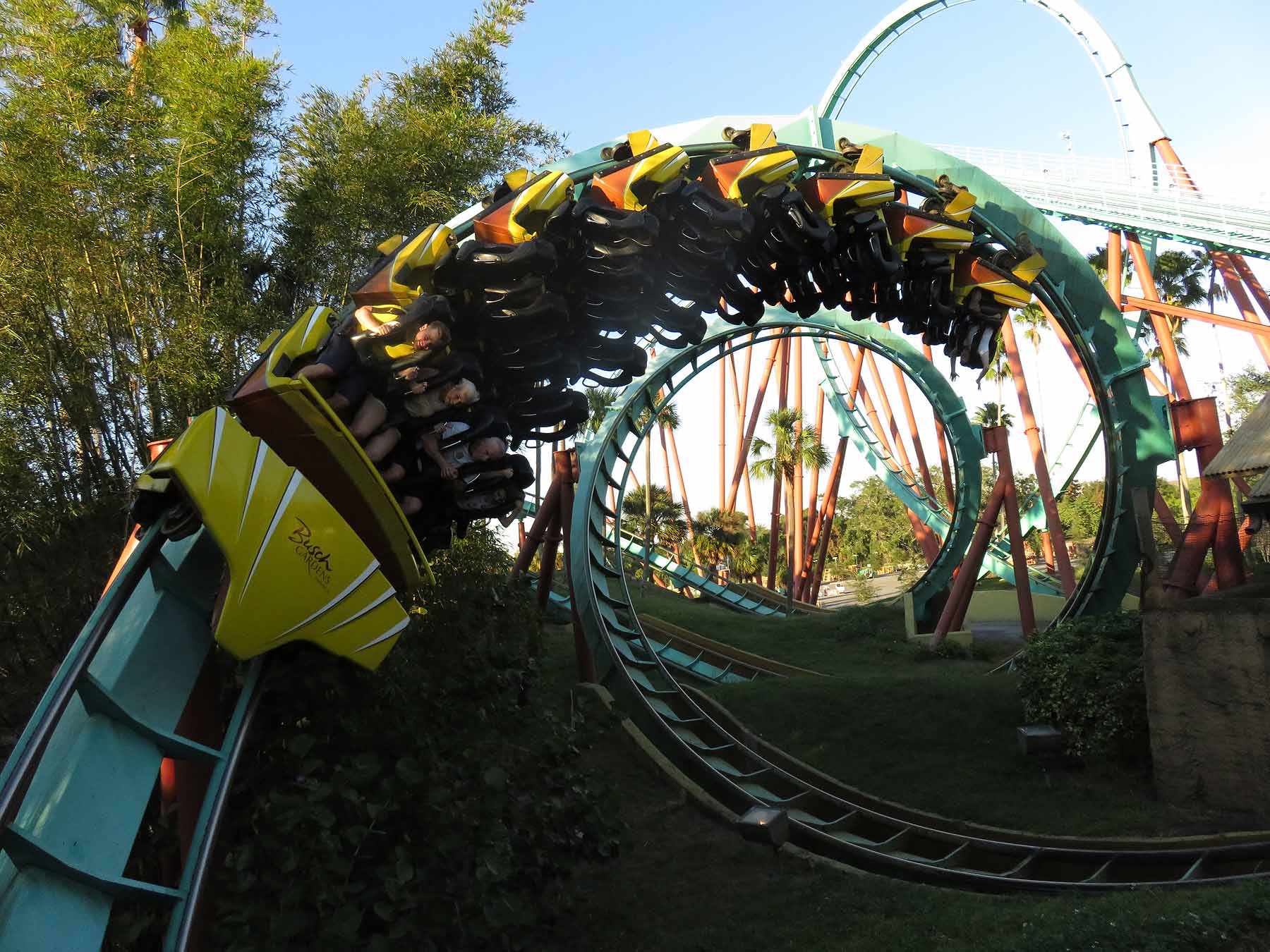 As any coaster enthusiast knows, Bolliger & Mabillard coasters are known for the “Roar” sound they make. Kumba, which translates to “Roar” in the African Congo language, is one of the most iconic coasters at Busch Gardens Tampa. Featuring perhaps the most photographed set of interlocking corkscrews on any roller coaster and a loop that circle’s the ride’s lift hill, a ride on Kumba means non-stop thrills over the nearly 4,000′ feet of track. Despite its age and status as the first-ever B&M traditional sit down roller coaster, Kumba still provides a great ride if your stomach can handle the seven stomach-churning inversions! It’s weird to call a coaster younger than 30 years old a classic, but it truly has held up over the years! 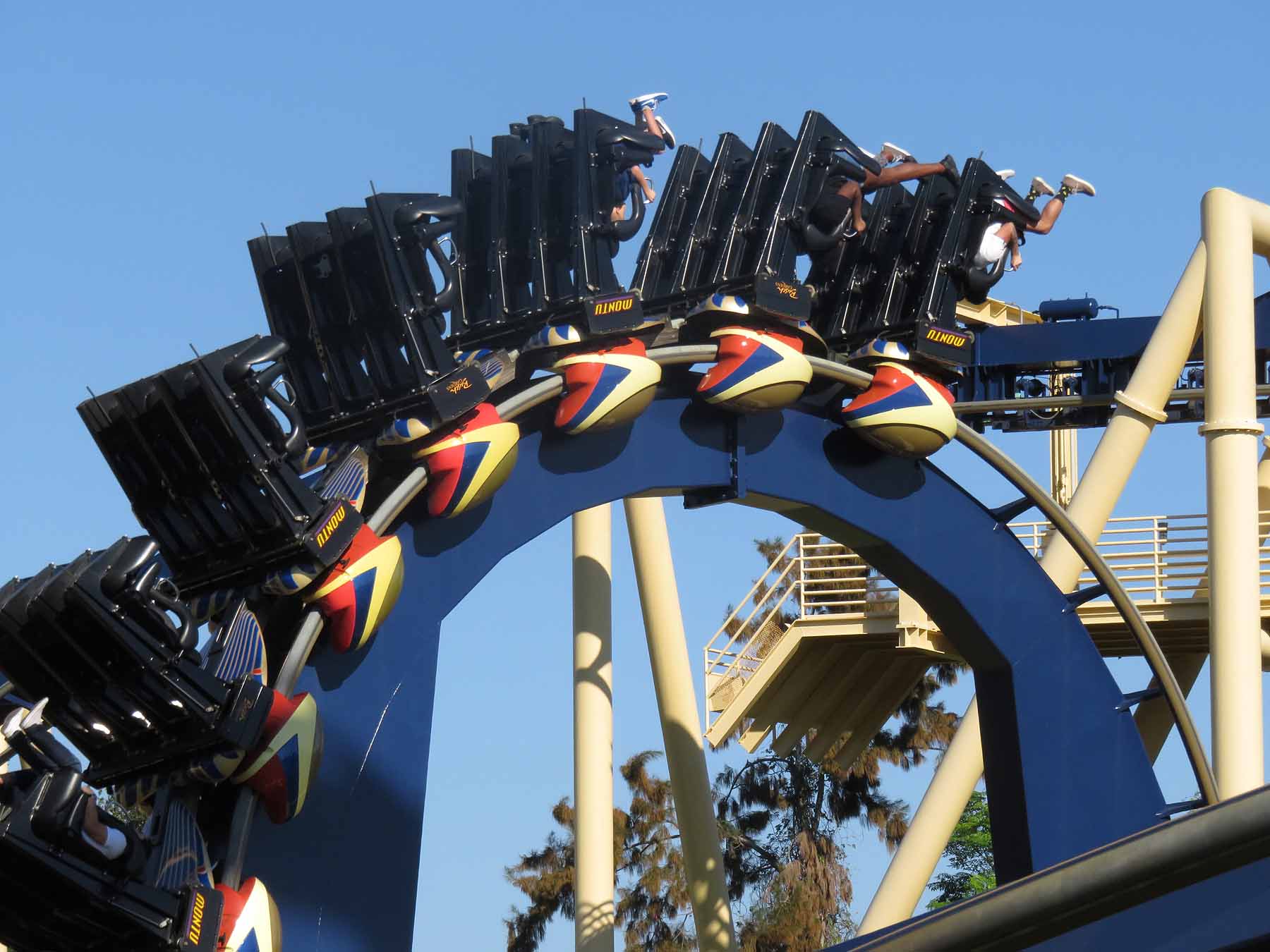 Another coaster at Busch Gardens Tampa with seven inversions, Montu is a B&M inverted coaster where each element flows seamlessly to the next. Despite being a completely different type of roller coaster experience than what is on Kumba, Montu is just six feet longer, seven feet taller, and six seconds longer than the nearby sit down coaster. As riders on Montu reach 60mph, the same top speed as Kumba, the trains will encounter two vertical loops, a batwing double inversion, as well as an immelmann, corkscrew, and zero-G roll. Anchoring the park’s Egypt section, Montu is consistently rated as one of the best B&M inverts, even with it turning 25 in 2021.

If you’ve gotten this far, of course you know that Iron Gwazi was going to top this list, despite not being open at the time of this writing. Rising from the ashes of the former Gwazi wooden coaster who went under the metaphorical knife of Rocky Mountain Construction, Iron Gwazi has been teasing park guests for nearly the entirety of 2020, as testing began just as the COVID-19 pandemic started shutting down theme parks across the world. Recently, the park released a point of view video, and we believe it’s going to live up to the hype. With a beyond vertical drop, two inversions, and a top-speed of 76mph, it is safe to assume that Iron Gwazi will not only be the most thrilling coaster at Busch Gardens Tampa, but very well could be one of the most thrilling coasters in North America when all is said and done!

…But since you started with Air Grover, you’re ready for it, right?