Worlds of Fun’s Coasters Ranked By A First-Time Visitor 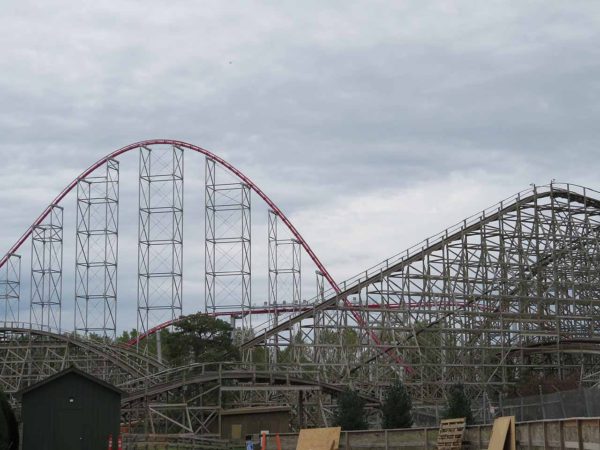 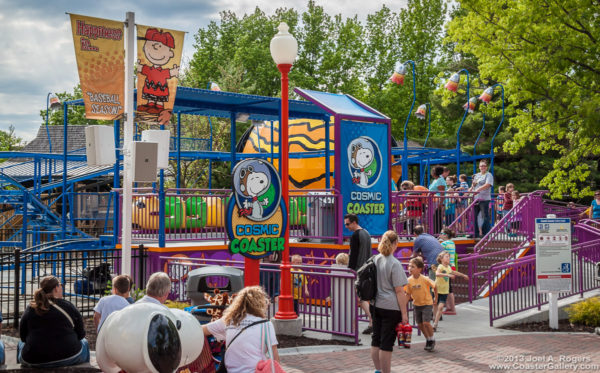 During my visit, Planet Snoopy’s Cosmic Coaster was the one roller coaster I didn’t actually ride (due to the fact that it was not operating during my visit.) However, with Cosmic Coaster, which is the park’s lone kiddie coaster, you probably know what you’re getting.

One of just three “Wacky Worm” models manufactured by Preston & Barbieri, Cosmic Coaster has been operating at Worlds of Fun since 1993, and was actually known as “Wacky Worm” until 2011. 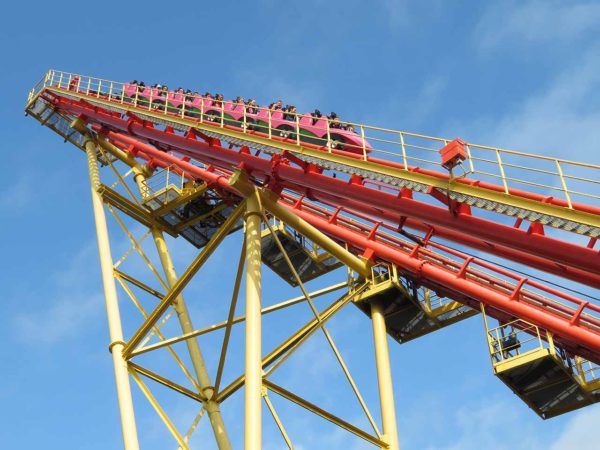 Of coasters I actually rode at Worlds of Fun, Boomerang proved to occupy the bottom spot on my list. A Vekoma model of the same name, Boomerang provided the all-too-familiar experience of a slow, backwards ascent, release from the catch car, rush through the station and into an almost-too-tight Cobra Roll, vertical loop, and up another incline, before letting gravity take over again, and taking on the same course in reverse. 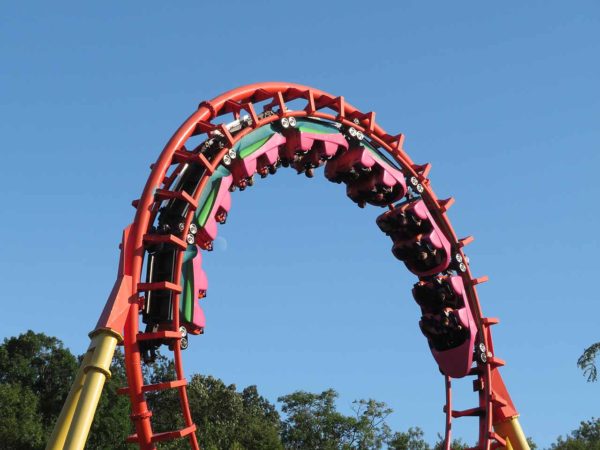 I don’t know if it’s the feeling of taking inversions in reverse, or the relative “tightness” and size of the inversions, but I’ve never been the biggest fan of standard Vekoma Boomerangs or their inverted cousins. It wasn’t an “unenjoyable” ride by any means, but I definitely wasn’t clamoring to jump right back in line after it was over. 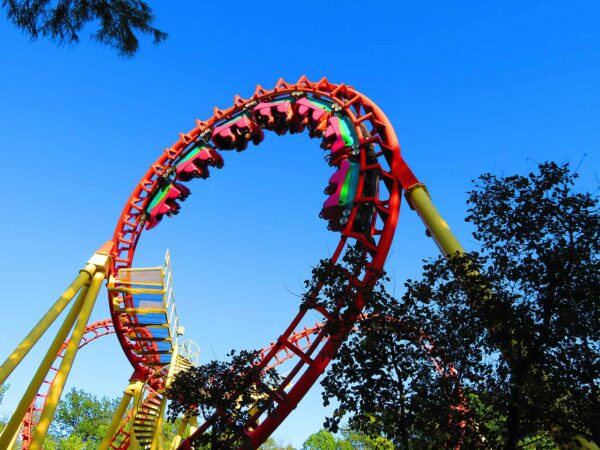 A point in Boomerang’s favor? It’s one of the easiest coasters to photograph at Worlds of Fun, and resulted in several great shots! 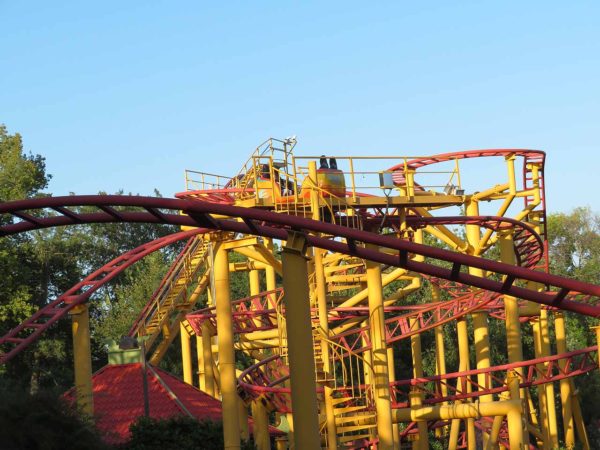 Spinning Dragons was my first ever Gerstlauer Spinning Coaster, and while spinning isn’t usually my favorite element on a roller coaster, I either got lucky without a ton of spinning, or just didn’t mind the spinning too much.

The coaster evoked some elements of a Wild Mouse-style coaster with it’s tight hairpin turns and sudden drops, and though I only rode once, it’s easy to see why riders will truly have a unique ride experience each time. (I was facing backwards on the lift hill, and also several of the drops. It was pretty fantastic.) 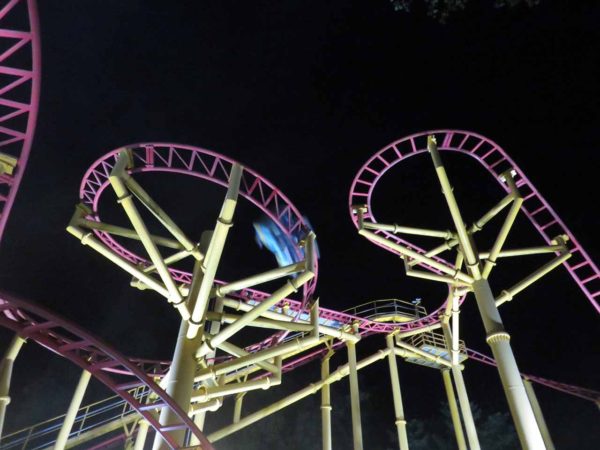 Located in “The Orient” section of Worlds of Fun, Spinning Dragons is also ornately landscaped with a fountain in the center of a big sweeping turn that heads towards the ride’s finale. 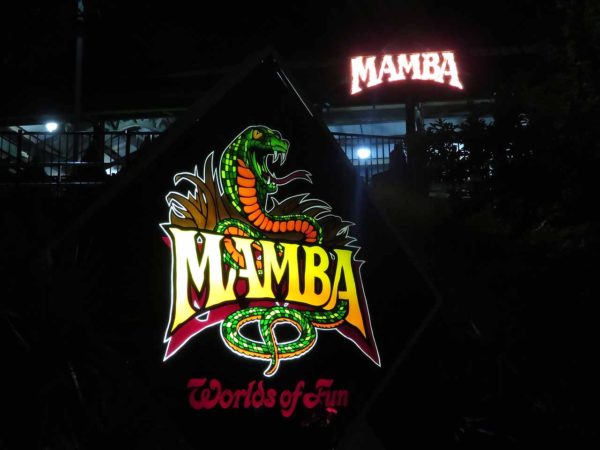 For a park with just seven coasters, Worlds of Fun has a pretty fantastic “big four,” which made these next four rankings pretty hard. Mamba is one of just four “Hyper” coasters built by Morgan, and one of three in the Cedar Fair family (Steel Force at Dorney Park and Wild Thing at Valleyfair). It opened in 1998. 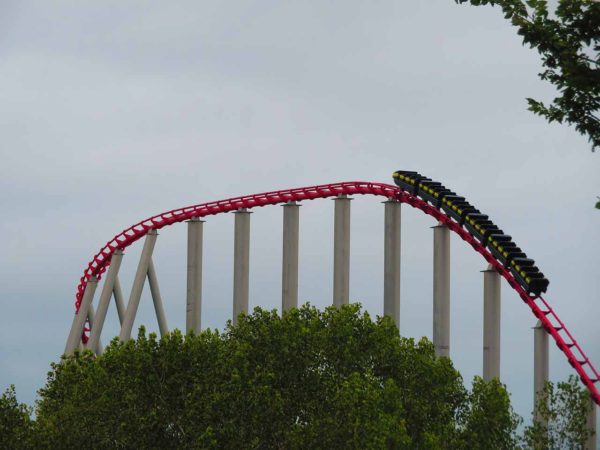 The slow ascent up the lift hill is quickly made up for by the 75mph speeds reached on the 205′ first drop. Riders immediately go into a 184-foot tall camelback hill and climb another hill before diving into a 580-degree helix that is near ground level with some amazing head choppers. The simple lap-bar only restraints and seat belts provide an “open-ness” that result in an incredible amount of airtime, especially in the back row. 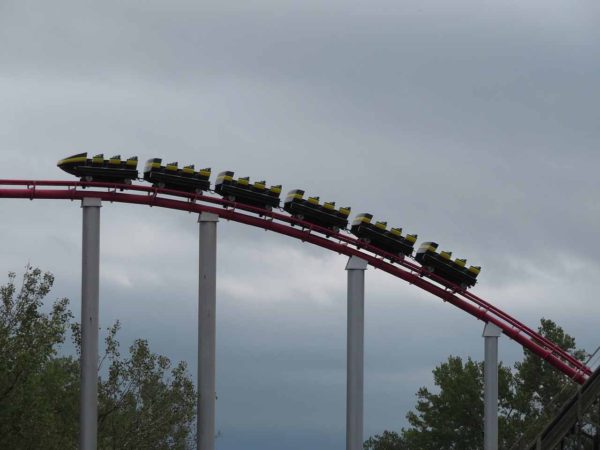 Just because Mamba is ranked fourth doesn’t mean I didn’t enjoy my ride. It’s definitely a fantastic coaster for being old enough to legally drink, and I wish there were more Morgan hypers built around the world. By the way? How I managed to get no people in any shot I took of Mamba, I’ll never know. 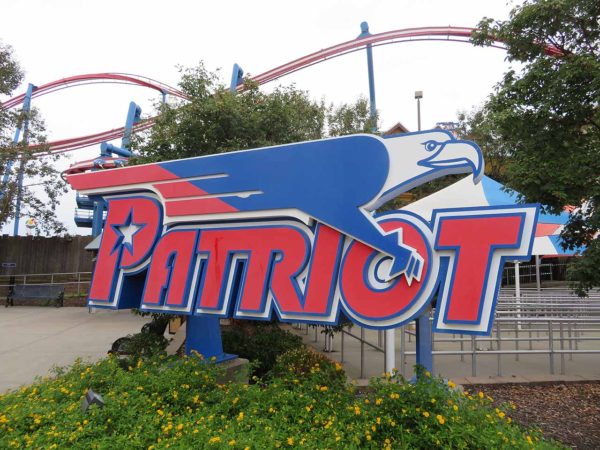 Patriot isn’t the tallest, fastest, or longest invert ever built by Bolliger & Mabillard, but it’s an invert that does some of everything that Bolliger & Mabillard does well, and it does those things right. Sweeping first drop? Check. Glass smooth track? Check. That B&M Roar? It’s quieter than a typical B&M, but it’s certainly there! 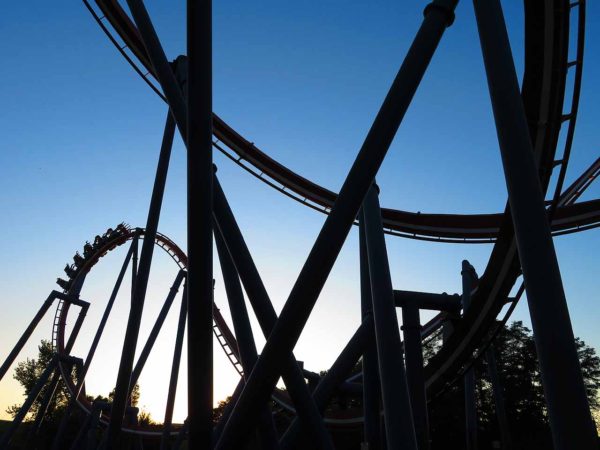 The four inversions – a vertical loop, zero-G roll, Immelmann loop, and corkscrew – are all placed perfectly placed within the ride’s slightly longer than two-minute ride cycle, resulting in a fantastic paced ride. I can honestly say that it was enjoyable from start to finish. 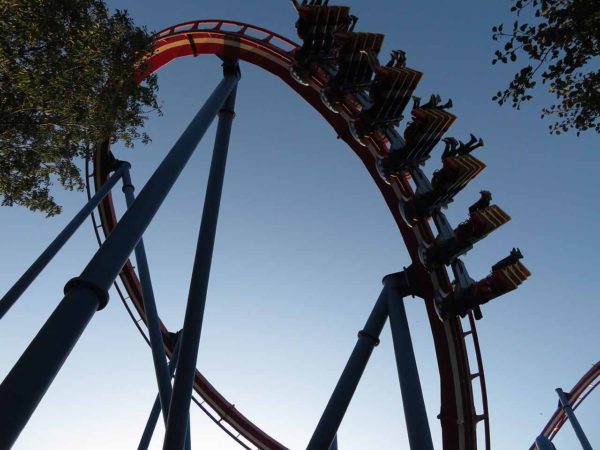 Rarely does a roller coaster just “work” well in all aspects, but from it’s color scheme, to name, to location in the park, to ride experience, Patriot certainly does. 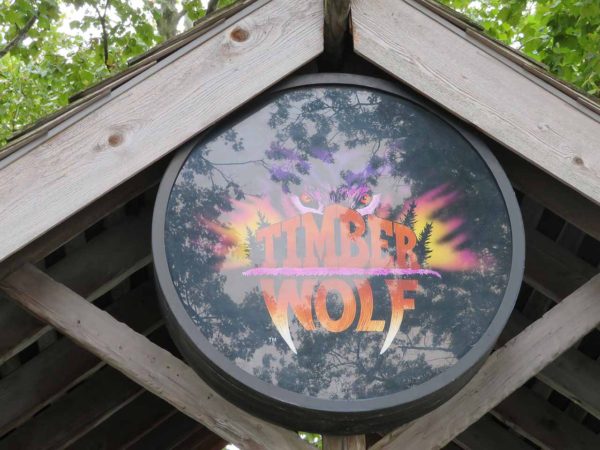 Worlds of Fun’s oldest operating roller coaster, has been receiving some “TLC” from the park each off-season for the last several years, and it shows. The Dinn wooden coaster earned its spot in these particular rankings due to its relative (for a wooden coaster) smoothness, air-time in the back row, and complete darkness during a night ride. 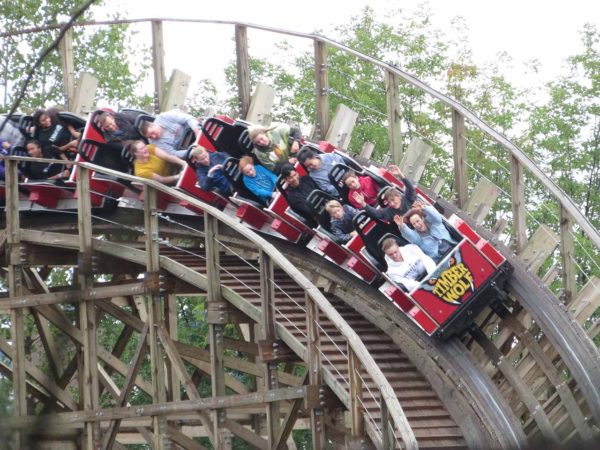 Formerly a 540-degree helix, the new-in-2018 banked turn that was installed by Great Coasters International proved to be a great addition to the coaster (and proved to be a great spot to photograph through the trees.) However, the real winner for me for Timber Wolf was the almost out-of-your-seat air time that came after the coaster’s first drop. It was then I knew my ride on Timber Wolf was going to exceed my expectations for what many consider to be a “rougher” wooden coaster. 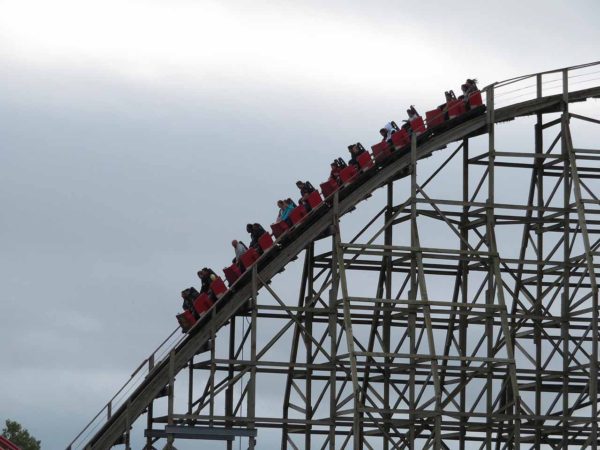 I was almost ready to shock the world and rank Timber Wolf as my favorite coaster at Worlds of Fun, if it wasn’t for one final ride on…

You want to know how one ride can completely change your opinion on a coaster? Ride Prowler, a Great Coasters International woodie that opened in 2009, in the back row, at night. During my trip, I rode Prowler twice, in the front row on a Friday Night, and in the back row on a Saturday Night. The latter, while not quite a life-changing experience, certainly was a highlight of my trip to Worlds of Fun, and bumped Timber Wolf from the top of my list. 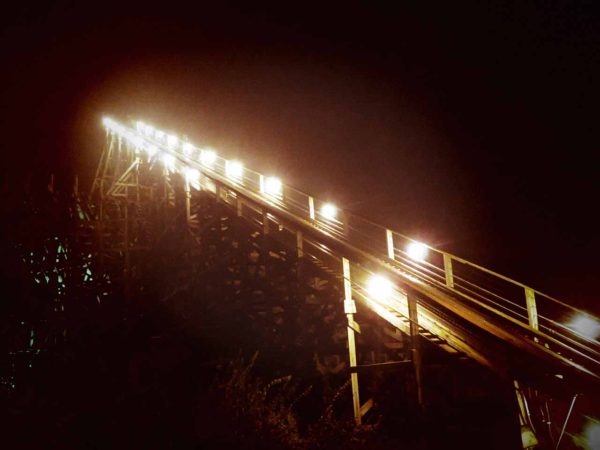 I just had to google map the layout of Prowler, because I’m still not quite sure which way it goes after the two night rides. I’ve been told from multiple people that Prowler was Mystic Timbers before Mystic Timbers existed (and obviously with 100% less shed.), and it further solidified GCI as my favorite wooden coaster manufacturer. 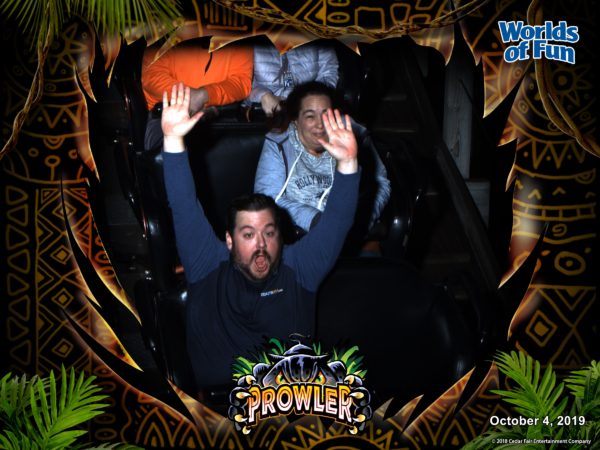