With 2019 marking the end of great decade of roller coasters, we’ve decided to take a look back at some of the best coasters from a different era: The oldest!

One of the awesome things about roller coasters is that a really well designed ride is timeless. New technology can lead to cool new types of roller coasters, but its not a guarantee of a “better” coasters. Some of the best roller coasters out there are coasters built before 1970, over 50 years old! To help narrow it down a bit, we’ve decided to focus the list on historic coasters in North America that are still operating (and that we’ve been on). That means if you haven’t experienced these yet, you still can. In order from newest to oldest, here are ten of the best coasters over 50 years old that are still delighting riders to this day. 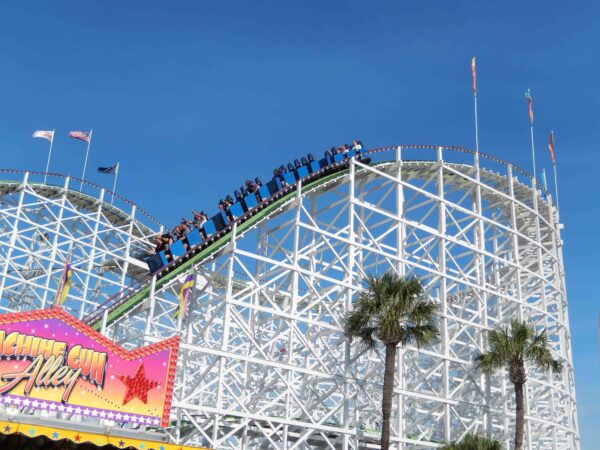 Family Kingdom is the sole remaining Seaside Amusement Park in Myrtle Beach, and its star attraction is the Swamp Fox wooden coaster. Featuring a simple “figure eight” design and a drop of just 62′, Swamp Fox isn’t going to break any records, but the panoramic views of the Atlantic Ocean as you ascend the 72′ tall lift hill are tough to beat. When Hurricane Hugo blew through Myrtle Beach in 1989, Swamp Fox was standing but not operating for two seasons before the coaster was rebuilt, resulting in the ride you can experience today.

With many other Myrtle Beach-area parks and attractions closing in recent years (The Pavilion, Hard Rock/Freestyle Music Park, etc.), it’s great to know that Family Kingdom continues to preserve this classic wooden coaster!

Ok, so the Matterhorn has gone through quite a few changes from when it first opened. Harold, the abominable snow man, didn’t show up until the 70s, along with most of the interior theming. The cars and trains have gone through multiple iterations as well. But, despite the changes, it still uses the same layout and the same ins-and-outs of the mountain as it did in 1959. When it opened, it was the first “tubular steel” roller coaster, and the first roller coaster built by Arrow Dynamics. It changed the roller coaster industry forever. 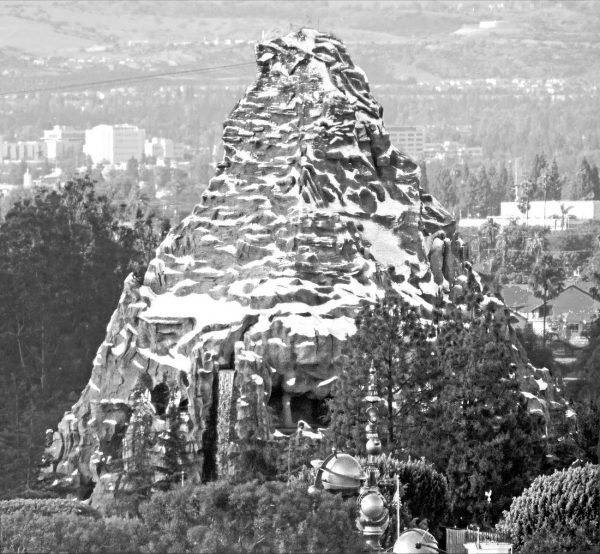 Yes, there are people who (reasonably) complain about the ride being a little rough. But, hey, you’re whipping around a mountain on a bobsled being chased by an abominable snowman, why would that be smooth? It’s one of the most iconic and historically important roller coasters in the world, and as long you brace yourself it can be a great ride. Plus as a kid Harold terrified me, so I’ll always have a soft spot for it.

Arguably the most famous roller coasters in the world, the Coney Island Cyclone (or just the Cyclone) remains almost the same as it did when it opened in 1927. Popular through its whole life, the coaster was almost lost in the 1970s, but was saved by fans through a “Save the Cyclone” campaign. It became a New York City landmark in 1988 and a National Landmark in 1991. It was refurbished extensively by Great Coasters International over several years starting back in 2012. 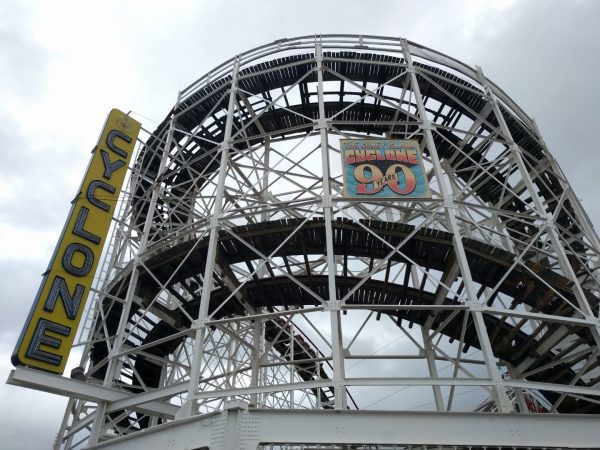 One of my favorite things about the ride is that it still feels like a coaster that old. The slightly grizzled operator pulling the handbrake as the train returns to the station, the old fashioned “Cyclone” sign hanging off the side, the original trains and cars. It feels rickety without being rough, which I imagine is exactly how people reacted to it 90 years ago. 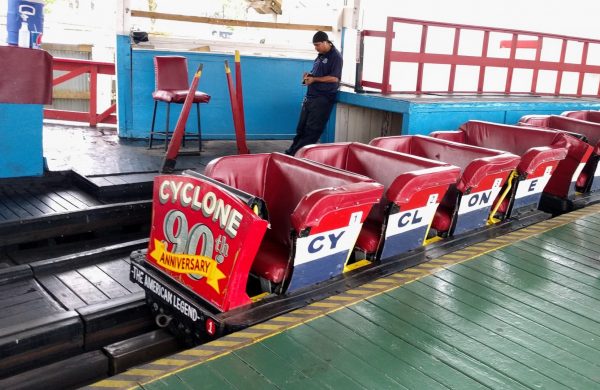 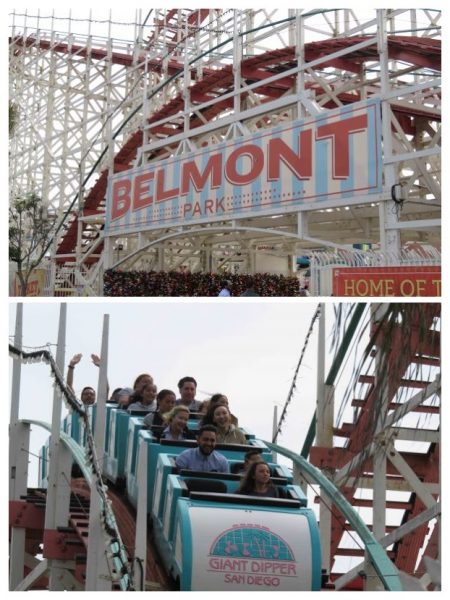 Not quite as famous as its slightly older sister coaster further up the California coaster (see below), the San Diego Giant Dipper at Belmont Park is still a great ride, and a National Historic Landmark. Designed by Frederick Church and Frank Prior, the coaster has had a few bumps in its history. The ride was damaged by a fire in 1955. It returned to operation, but the park shut down in 1976. It was saved from demolition by a group of fans, but it still wasn’t open. Finally, the coaster underwent a major restoration in 1989 and in August 1990 is reopened to the public and it remains the signature attraction of the park. The twisted first drop and compact design give it a relatively unique layout for an older coaster, and the beautiful location with beaches on both sides of it can’t be beat. 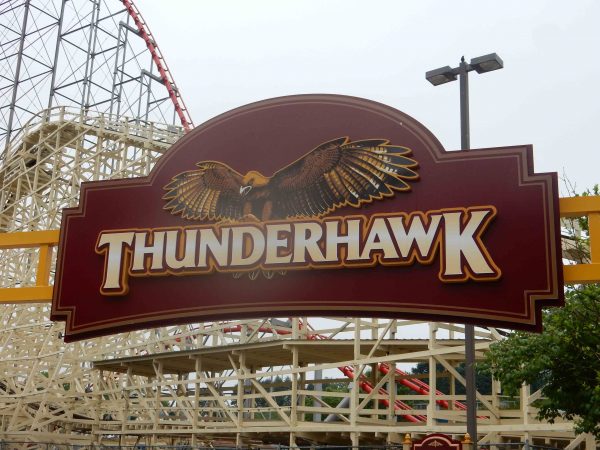 The lone wooden coaster at Dorney Park, Thunderhawk provides some amazing classic thrills for a park whose second “oldest” operating roller coaster opened in 1997. When Thunderhawk opened in 1924, it was known simply as the Coaster. The Coaster was renamed Thunderhawk with the addition of the Hercules roller coaster to the park in 1989. There have been many changes over the years, but when I rode it in 2016, it had received brand new PTC trains and a new coat of paint, and provided some fantastic lateral forces. I hope the park continues to show some more love to one of  the longest continuously operating Philadelphia Toboggan Coasters built coasters in existence. 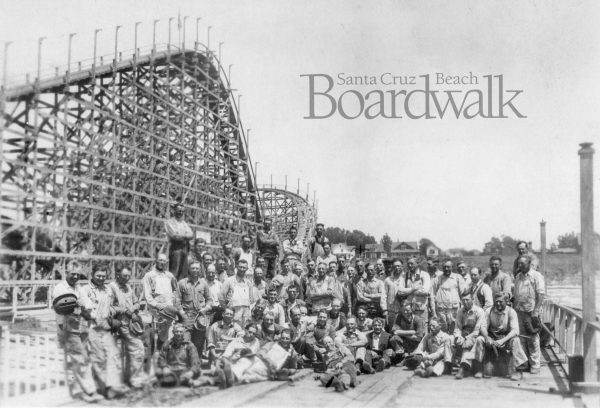 I’m obviously biased by living only an hour-ish away from the Boardwalk and growing up even closer to it, but this is probably my favorite coaster on the list. The Giant Dipper is a national historic landmark as well as an ACE coaster landmark. It regularly places high on the Golden Ticket list of best wooden coasters (#21 in 2018), and it’s a big part of why the Santa Cruz Beach Boardwalk regularly wins the Golden Ticket for best seaside park. 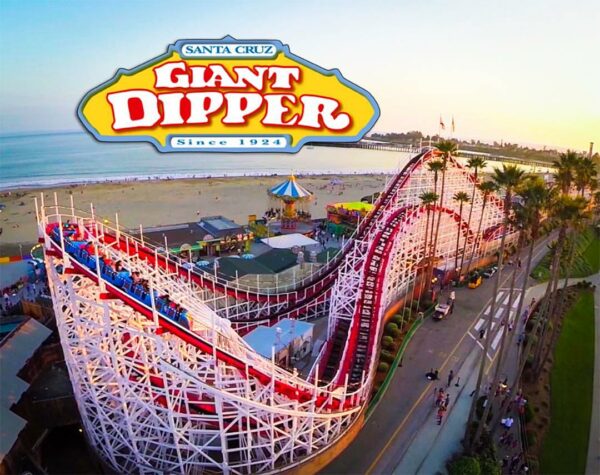 It opens with one of my favorite “pre-lift” sections on any ride, dropping you into darkness through a tunnel for nearly 20 seconds. When you emerge you’re met with an amazing view of the beach and the Pacific Ocean to the right and rows of palm trees on the left. The double out and back layout has a good mix of air and headchoppers, with most of the second half of the ride taking place under the structure. It’s a testament to the skills of designer Frederick Church and still one of my favorite roller coasters, period. 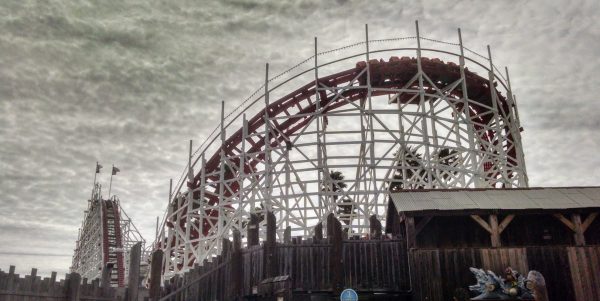 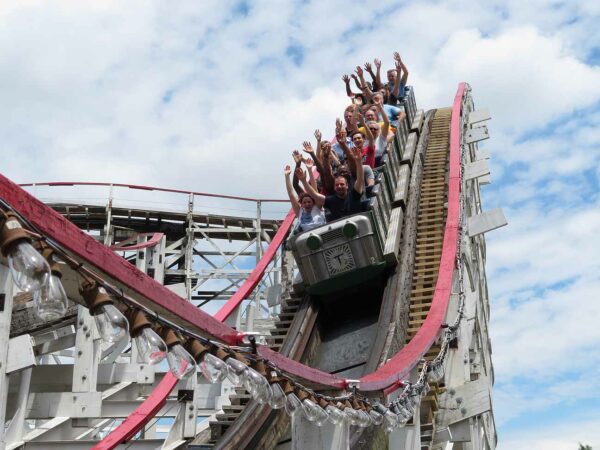 Thunderbolt at Kennywood is one of the most unique coasters I’ve ever ridden on. Although it opened originally as “Pippin” in 1924, the ride was heavily reworked in 1968, adding a large helix towards the front. Maybe the most interesting thing about the ride it starts by dropping down into a ravine, going under the track of Phantom’s Revenge. The whole section in the ravines is beautiful, surrounded by the woods of the valley. The lift hill comes after the first two drops, leading into a wonderful nested helix filled with small humps. As my fellow Coaster101 writer John said, “make sure you ride with someone who you don’t mind bumping into. The seats have no dividers, so with each turn you will be pressed against your riding partner.” The ride then returns to the ravines for another great view and another narrow miss under Phantoms Revenge. For anyone who loves coasters that are unlike any other, Thunderbolt is a must ride. 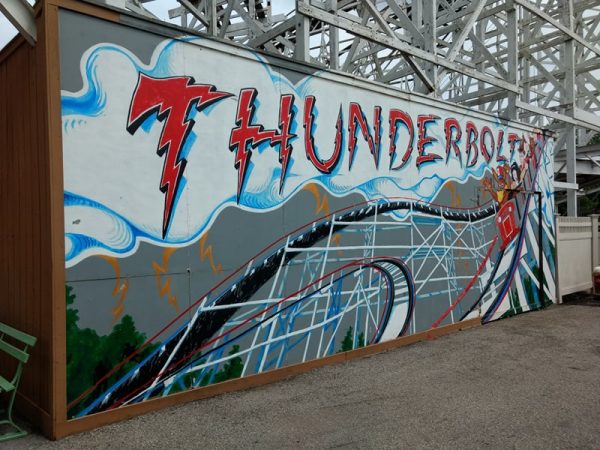 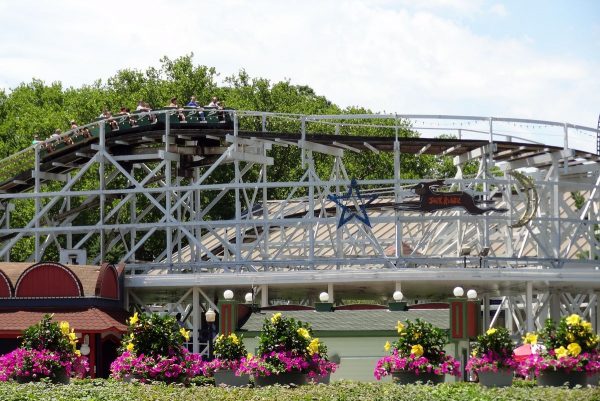 Jack Rabbit is the Kennywood’s oldest coaster at 99 years old. It was designed by John Miller, who also worked on Racer and Pippin at Kennywood. Jack Rabbit is a terrain coaster, meaning it utilizes the natural ridges and valleys around the ride to provide a unique ride layout. Terrain coasters are some of my favorite and Jack Rabbit is one of them (not to mention I am a huge sucker for old woodies). As you exit the station, you crawl around a bend and are greeted not by a lift, but a first drop! Riders actually will go through two drops and a tunnel before heading up the lift hill. Next up is my favorite part of the ride: the double down off the lift. You literally come out of your seat when you go over the second drop! Jack Rabbit is definitely one of my all time favorite coasters. 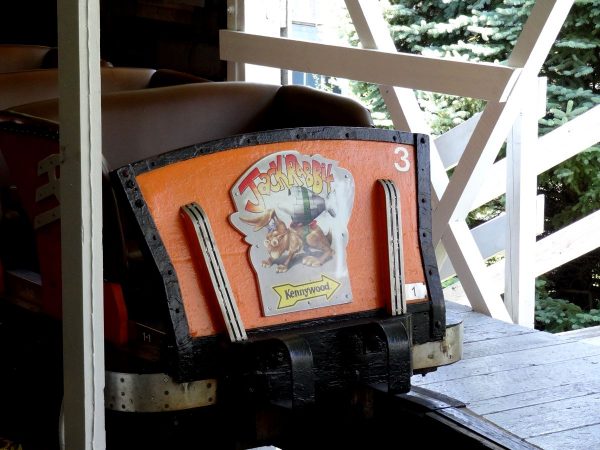 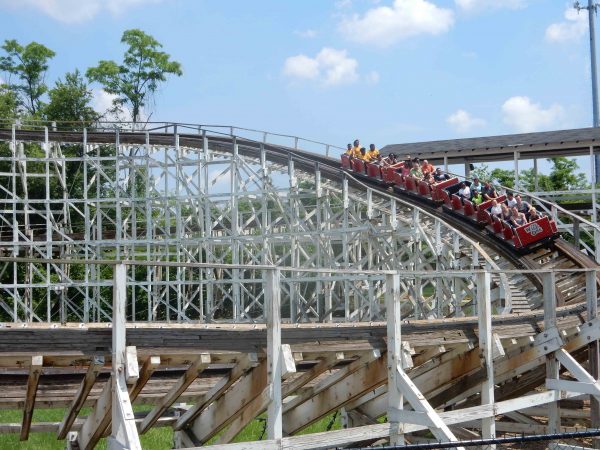 There’s a little leeway with calling “The Wild One” a 1917 coaster, especially since it opened in its current home, Six Flags America, in 1986. However, this original 1917 PTC designed coaster was relocated from the closed Paragon Park in Massachusetts where it was known as “Giant Coaster,” and was rebuilt by the Dinn Corporation. RCDB lists it as opening in 1917, so that’s what we’re going with! For a coaster that opened in 1917, it packs quite a punch with its 4000′ out-and-back design, complete with it’s helix finale. While I typically prefer steel coasters to wooden coasters, Wild One surprised me as my favorite coaster at Six Flags America when I visited the park in 2016. In a time where we wonder what the next coaster will be to be RMC’d, I hope that Six Flags keeps preserving Wild One as the classic coaster that it is! 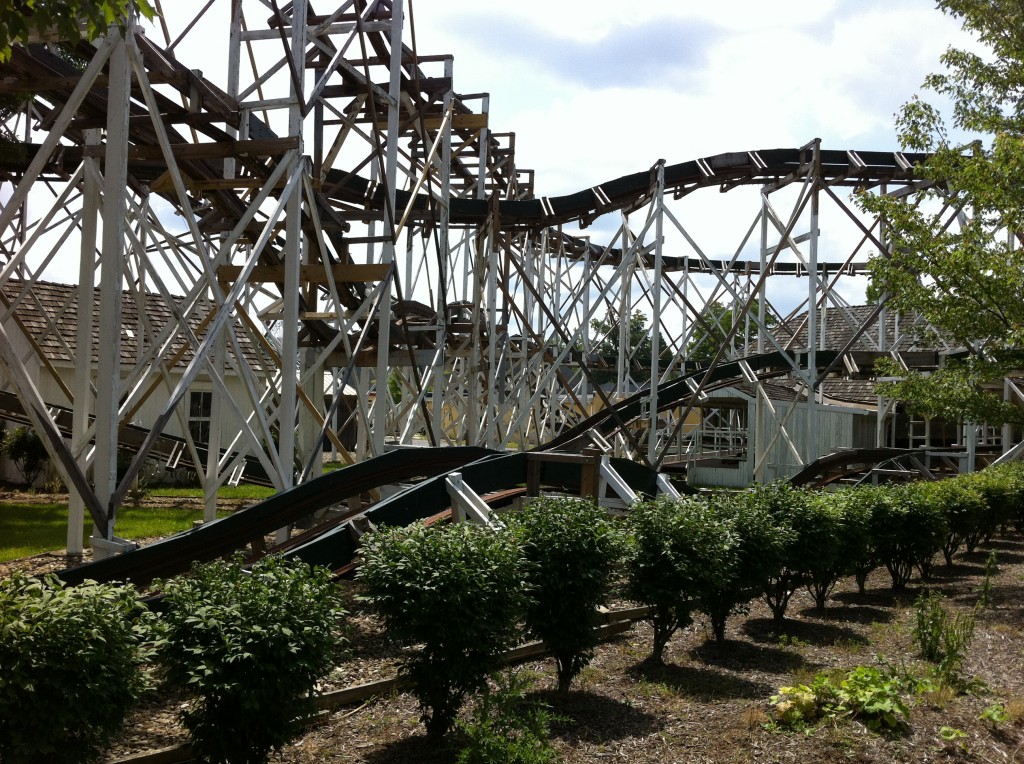 Leap-the-Dips opened in 1902, was closed from 1986 to 1998, and after a restoration campaign, reopened in 1999. When the park opens back up this Spring, it will once again be the world’s oldest operating roller coaster. It’s great to see that the Altoona community and Lakemont Park put in the time and money to restore this historic ride. The coaster is 1,452 feet long and 42 feet high. It’s highest drop is 9 feet and has a top speed of only 10 mph! I had the chance to visit Lakemont Park a few summers ago and ride this coaster. It was a incredible experience to ride something that old! It makes you appreciate where coasters have come and how far technology has come today. Leap-the-Dips is a side-friction coaster; that means it uses side boards to keep the car on track, rather than using up-stop wheels. Make sure to go grab a ride while you still can!

It was actually pretty hard to narrow down which coasters to include here, it turns out there are a lot of awesome coasters over 50 years old! How many of these have you ridden on? Let us know in the comments which 50 year old coasters are your favorites, and which 50+ year old coasters you love that we didn’t include! And to make sure you don’t miss a thing from us, make sure to Like us on Facebook and follow us on Twitter.