A Ranking of Hersheypark’s Roller Coasters from a First-Timer

Hersheypark is home to 13 roller coasters — 14 if you count Lightning Racer’s two tracks separately. I recently visited the park for the first time and was able to ride all 14 coasters in 12 hours. Naturally, I feel obligated to rank the park’s admirable coaster collection.

So let’s jump right in. I opted to rank the wooden and steel coasters separately.

My assessment: Skyrush is a miniature Intimidator 305 (of Kings Dominion). And as I-305 currently sits atop my list of favorite steel coasters, Skyrush has rightfully earned the second spot. 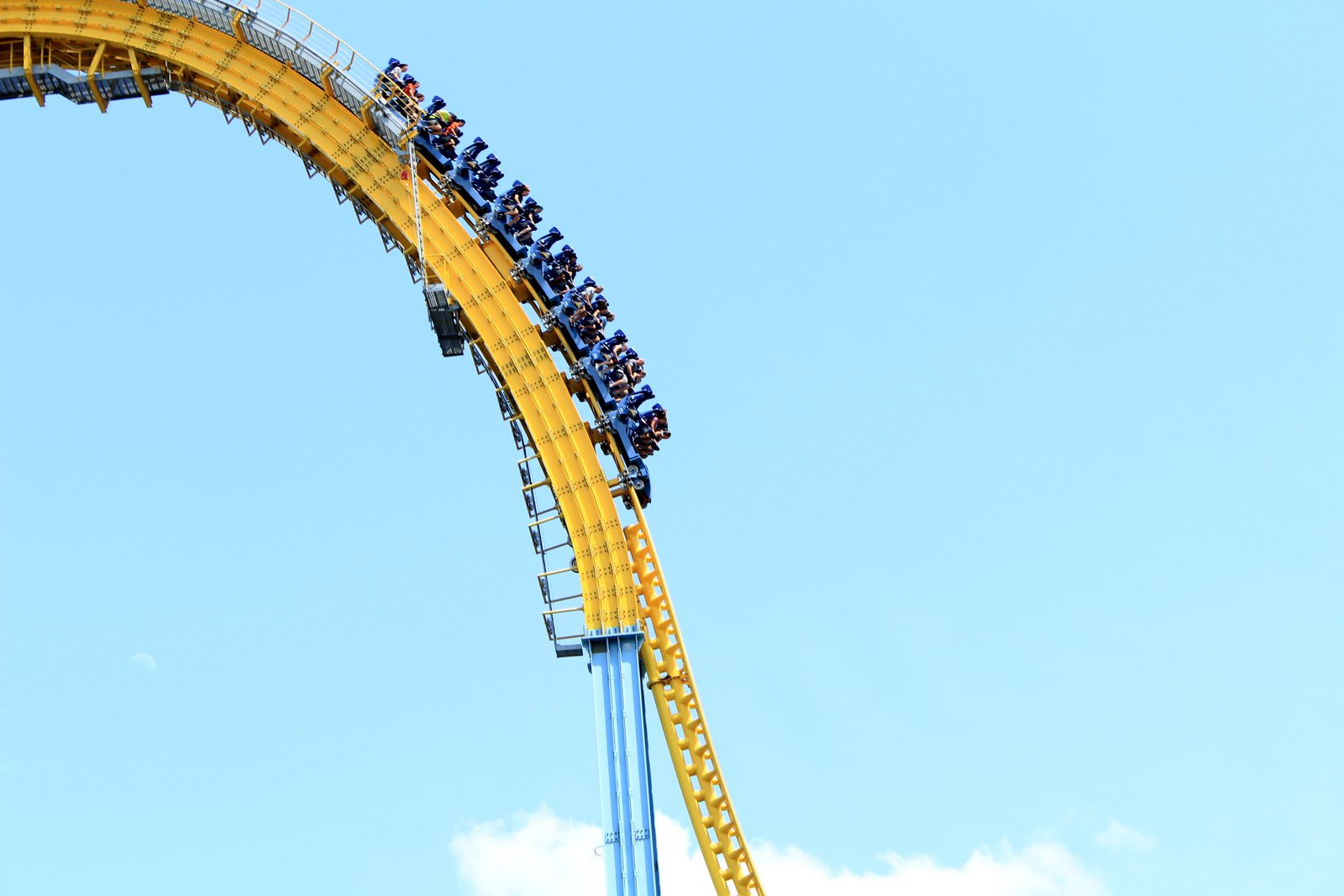 The 17 mph ascent to the peak of the 200-foot-tall lift hill was faster than I expected. I love how quickly the train exits the station — no time is wasted.

The train slows slightly at the peak, but that gave me a brief moment to admire the view. Because once the train drops, everything from that point on is a blur. 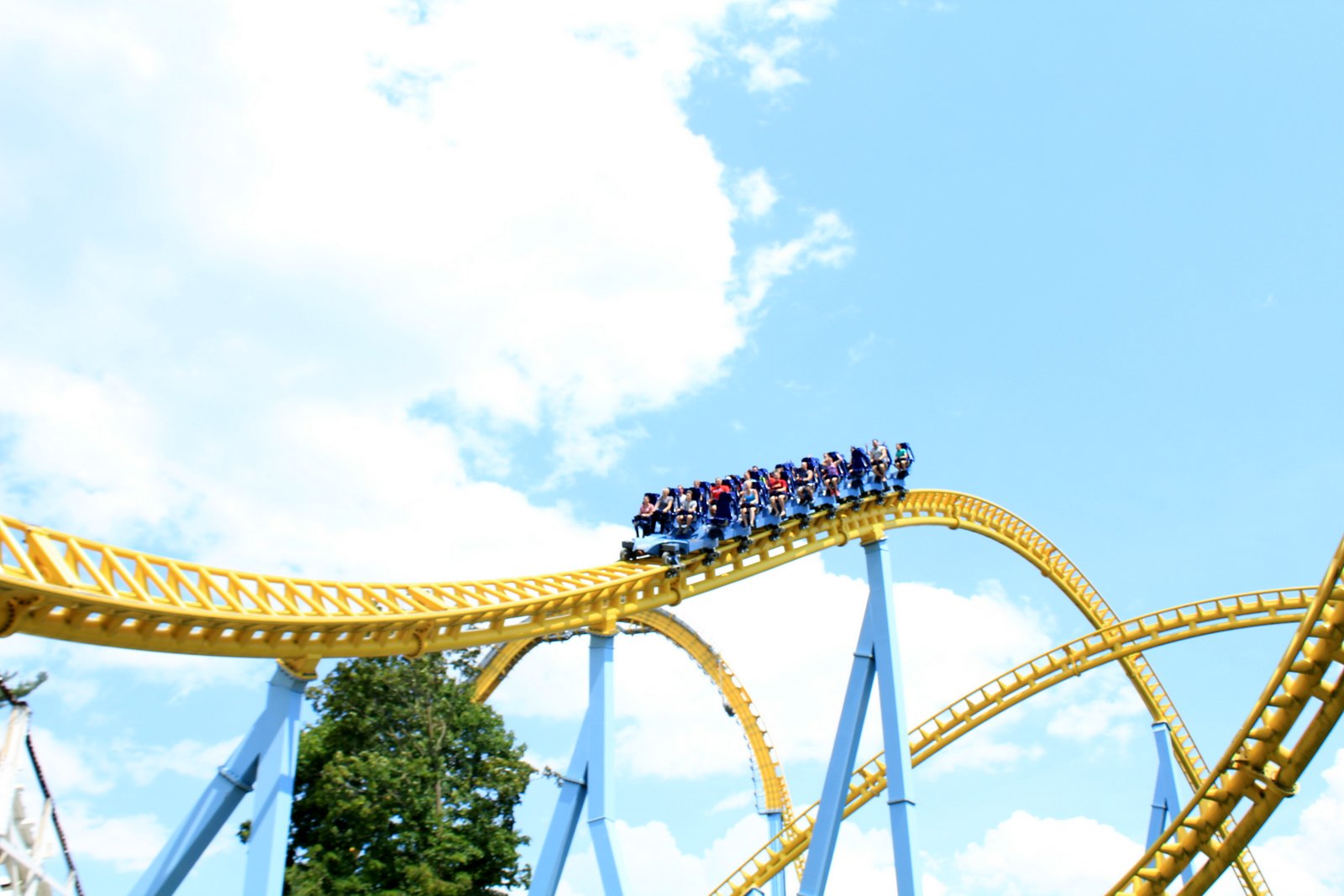 It’s rare that I feel somewhat uncertain my safety while riding a roller coaster, but I found myself actually grasping at the restraints during the fun-but-violent ejector air. Of course, I know that Skyrush is safe. But the restraints (more on those later) give you plenty of wiggle room.

While I didn’t “gray out” like I do on I-305, the forces were nearly as intense.

I quickly learned that I need to work on my upper body strength, as throughout the ride it was flailing around like a wet noodle. Skyrush had total control. 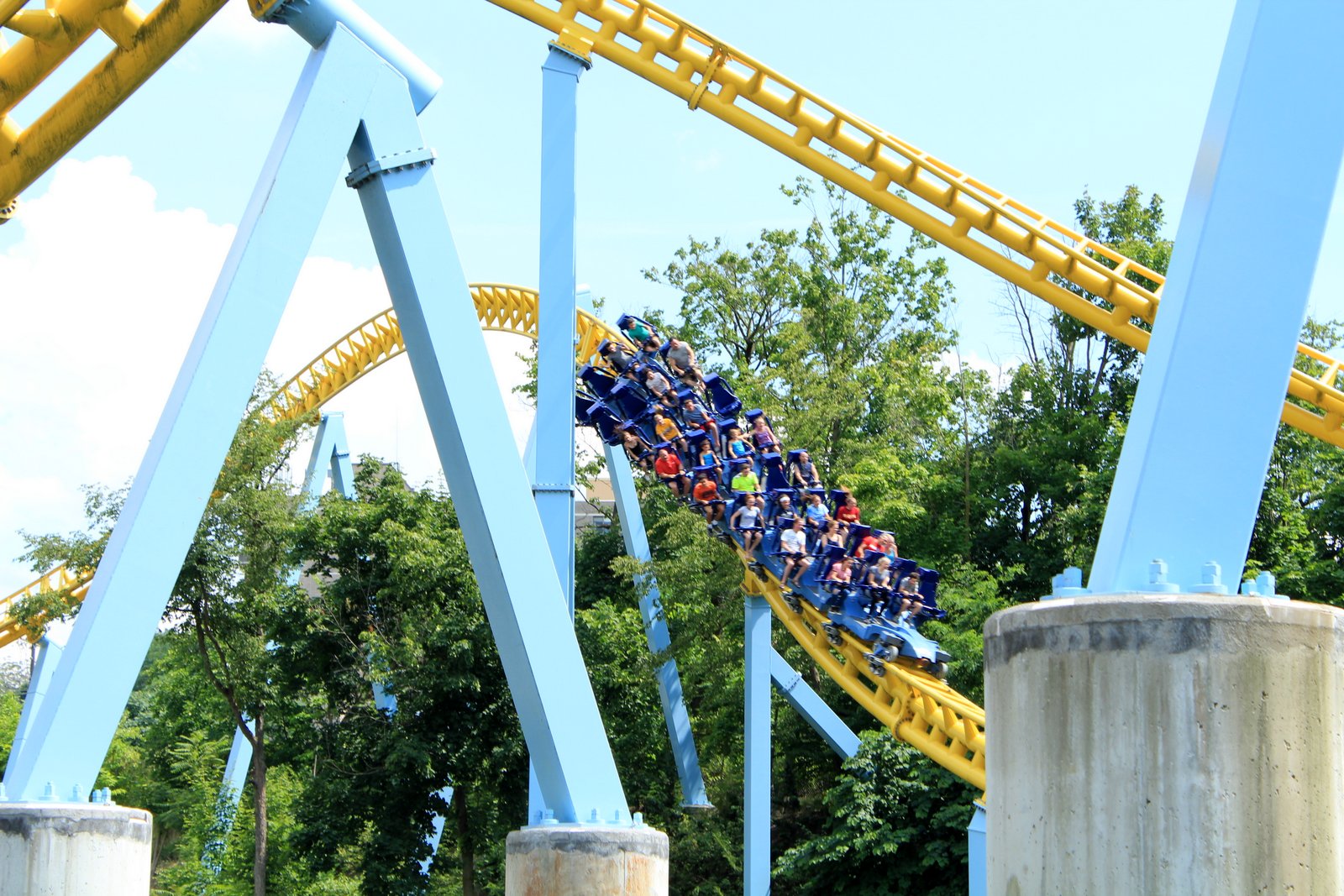 The one mark against Skyrush: those pesky restraints. Skyrush’s “Thigh Crusher” nickname is well earned. For those unfamiliar with Skyrush, the coaster features lap-bar restraints that rest directly on top of the thighs. During the ride’s intense positive and negative g-forces, the restraints tighten, putting a significant amount of pressure on the thighs. 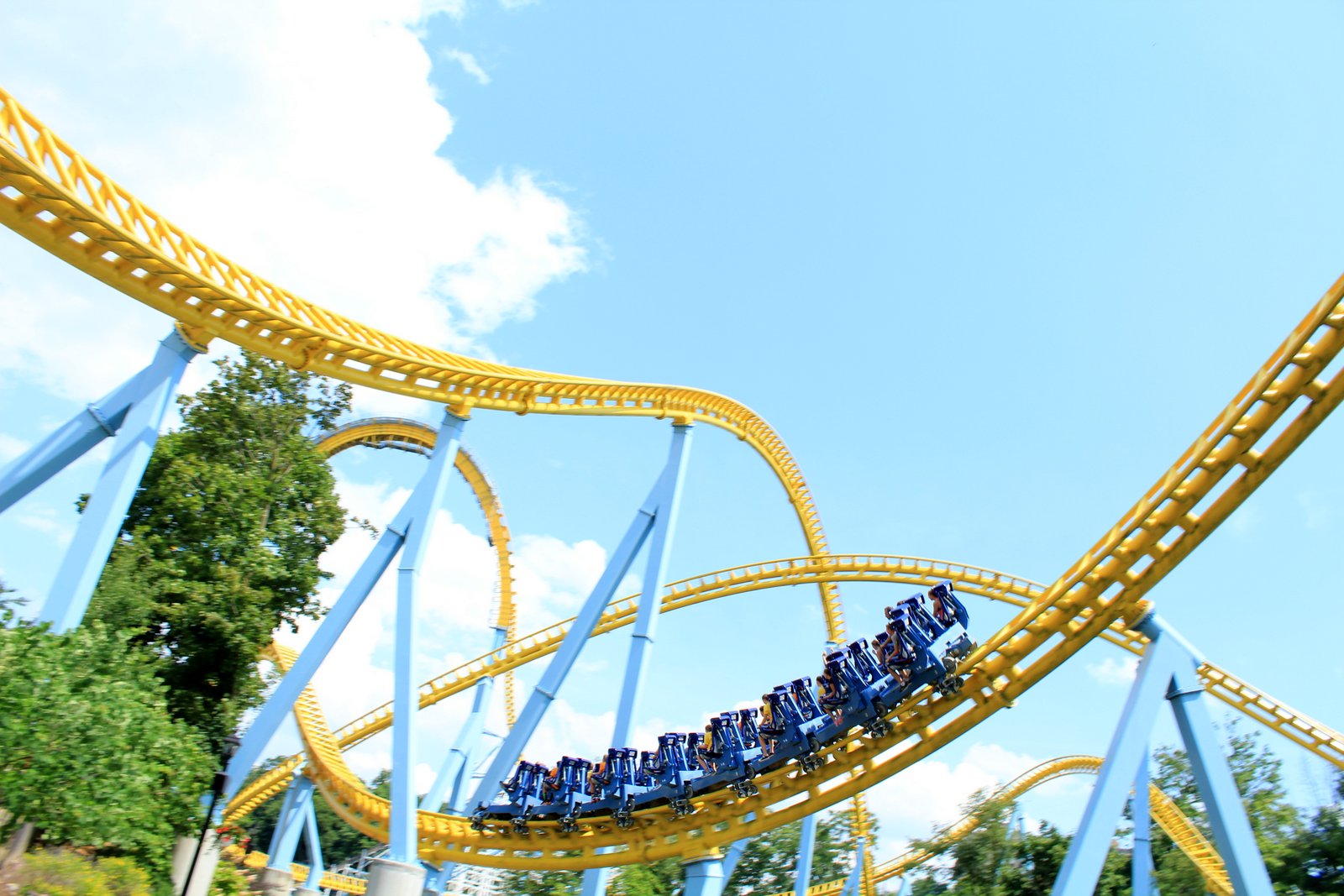 It hurts, but the ride is so good that I’m willing to suffer through a bit of pain. My mantra has always been, “if you don’t have a few bruises after a full day at an amusement park, you’re doing it wrong.”

The pain is most noticeable while the train is sitting on the brake run waiting for the train in the station to dispatch. Thankfully, the restraints release slightly, alleviating some of the pressure. 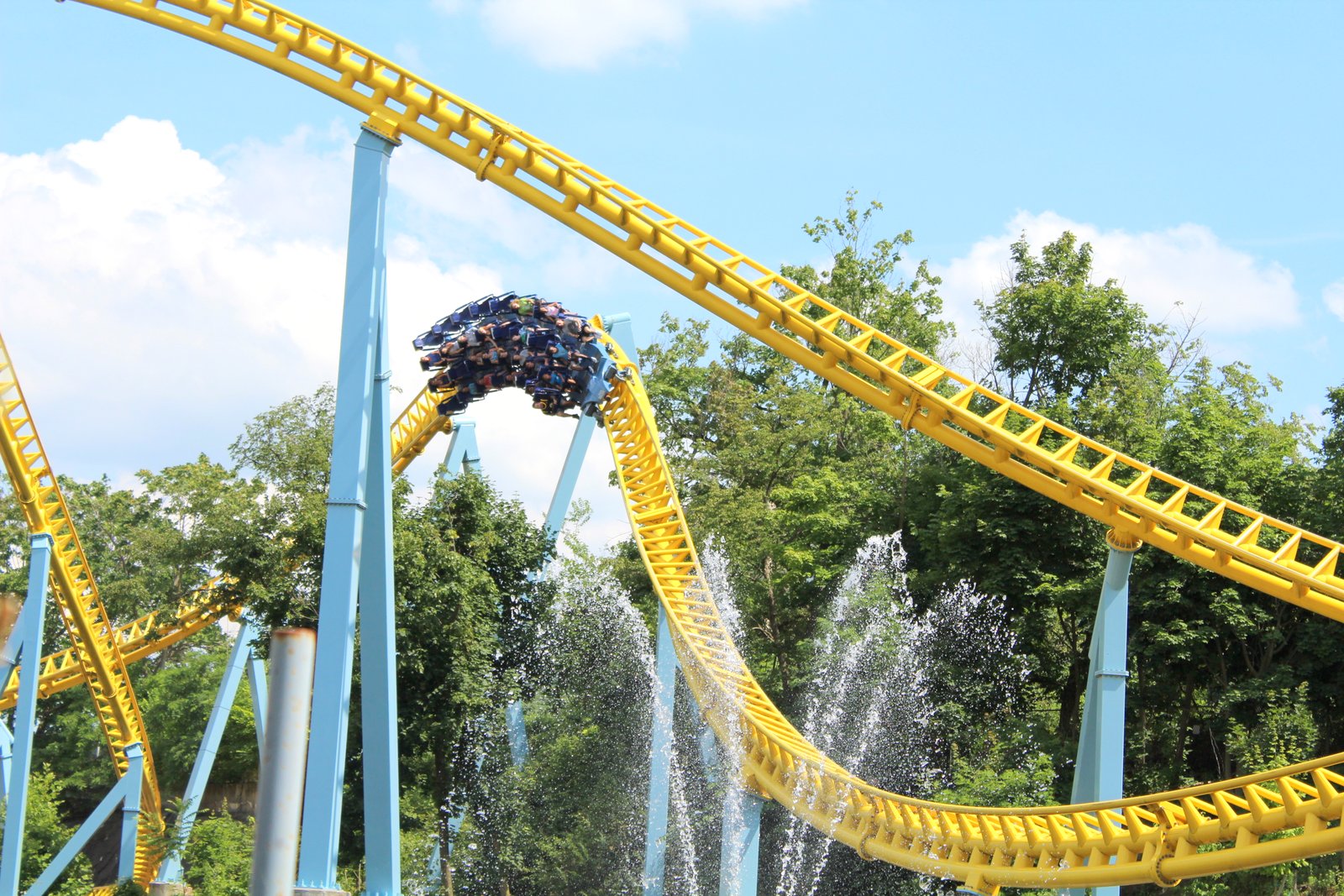 I loved Skyrush more and more with each ride. It is an outstanding creation, one that you’ll need to ride multiple times to gain a true sense of what all the coaster offers. Every element, every twist, every hill is taken with such precision — you’ll wonder why there aren’t more of these across the United States.

Disclaimer: I only rode on winged seats, but I did try both sides in the front, back and a few middle rows. If you think the inside seats provide a different ride experience (which I’m sure they do), let me know in the comments section below.

It’s hard to believe that out of the 160+ coasters I’ve ridden, Storm Runner was my first Intamin accelerator coaster. The most comparable is V2 at Six Flags Great America, which I now know pales in comparison to the beast that is Storm Runner. 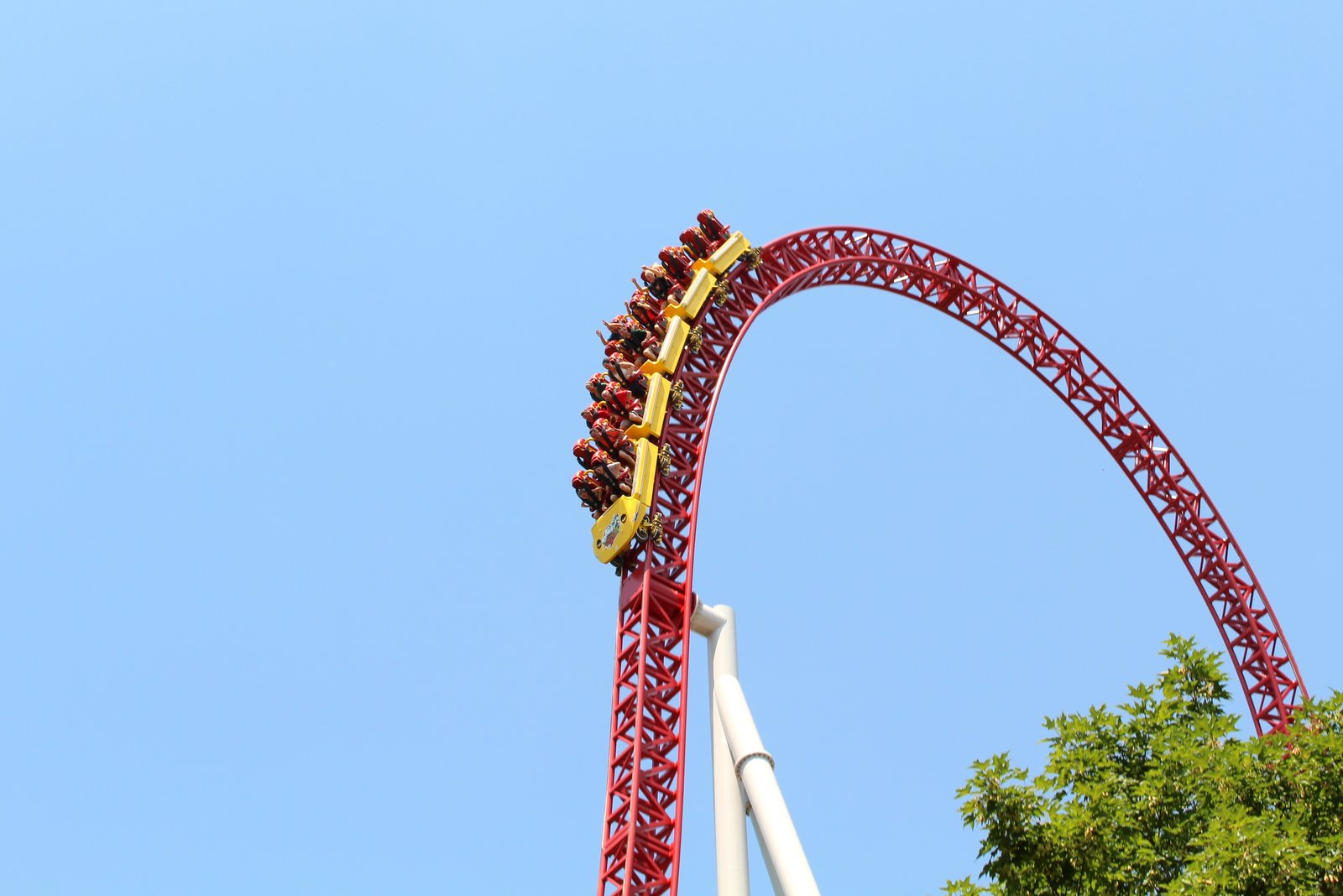 The 0-72 mph launch was pure insanity. I wasn’t expecting the intensity of the acceleration. I think my stomach is still on the launch track. 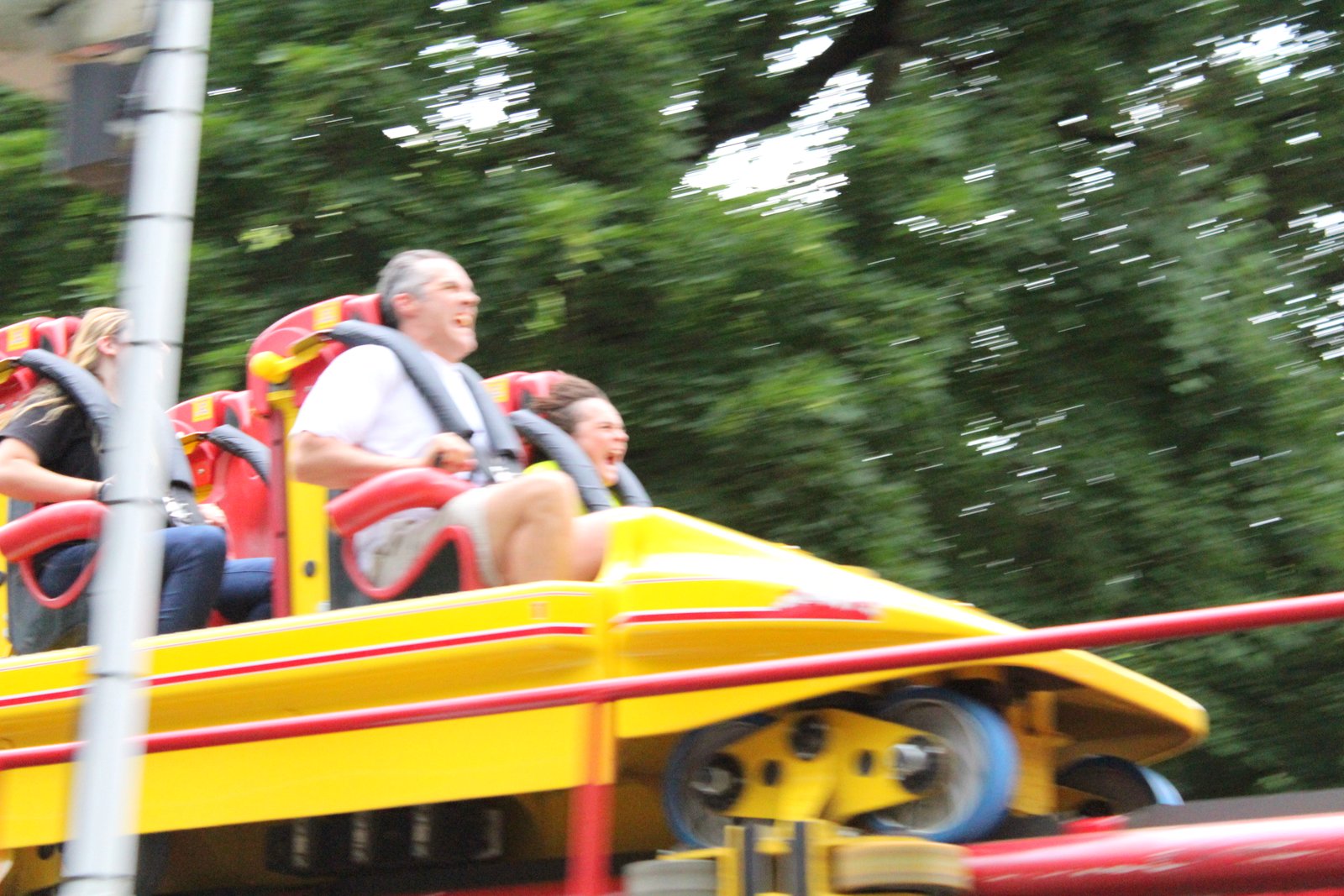 The remainder of the coaster’s course is incredible. And I love its position within the park. There are plenty of vantage points in the surrounding area to admire this work of roller coaster art.

My “sleeper hit” award for Hersheypark goes to Fahrenheit. I really wasn’t sure what to expect. Looking at its stats and layout, it seemed like a gimmicky beyond-vertical drop coaster with a few inversions thrown in for good measure. 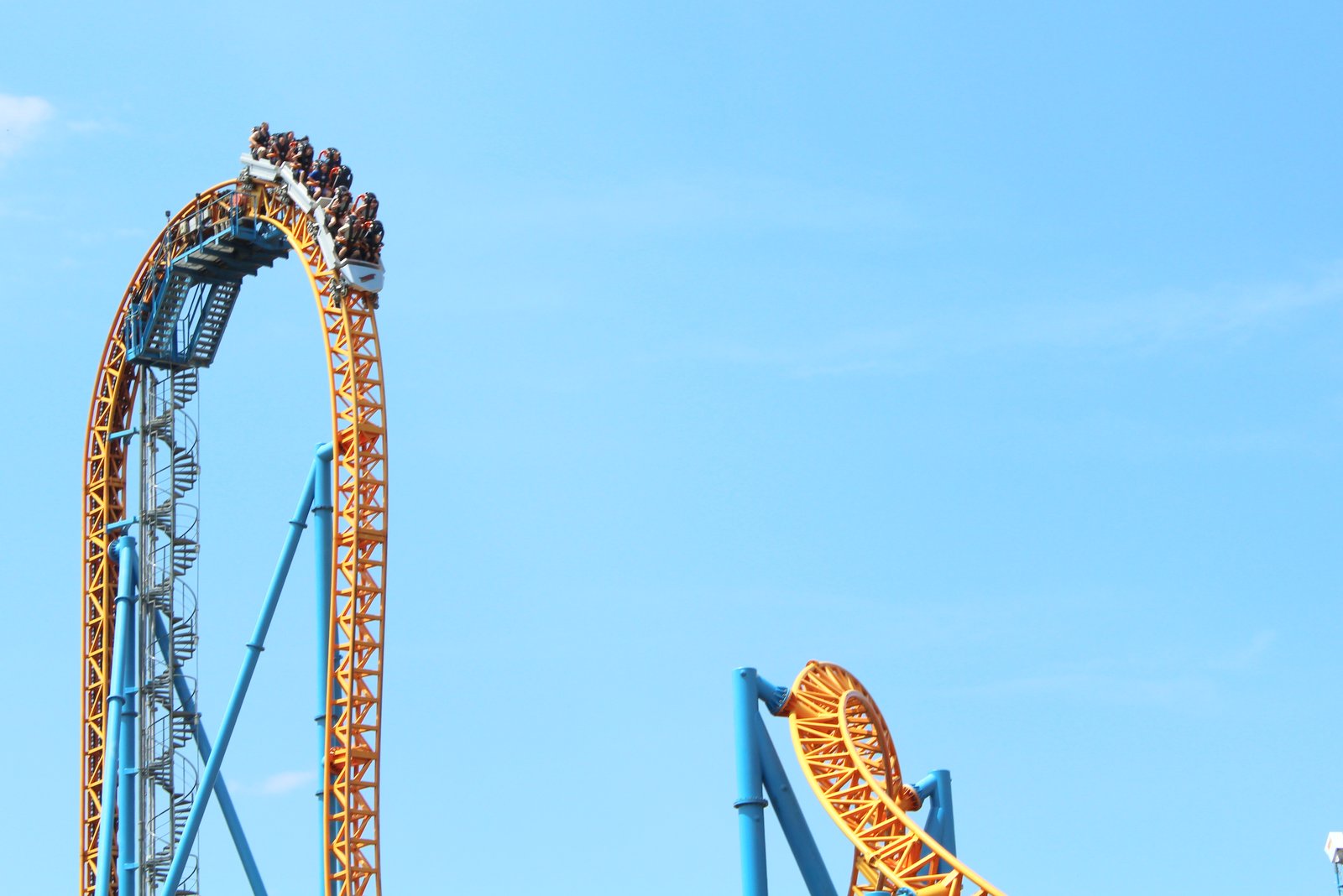 But I found it to be much, much more. The drop is of course great. But the remainder of the layout is where Fahrenheit shines. The Norwegian loop was my first (and one of only three in the world). It’s disorienting, but not so much to the point of being unbearable. 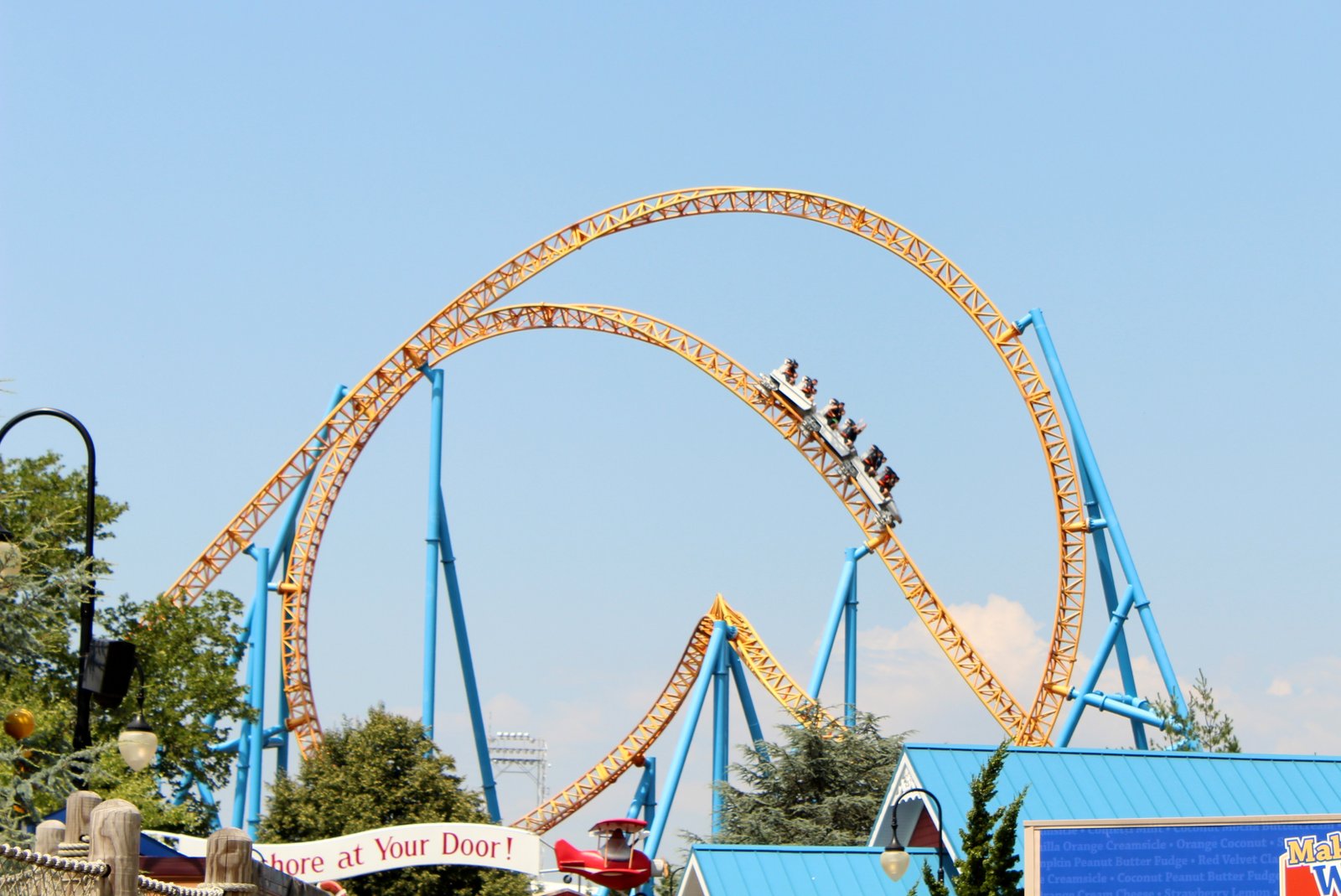 While the Norwegian loop was my favorite of Fahrenheit’s six inversions, the double corkscrews were a close second. I imagine they are similar to the double horseshoe roll on Maverick at Cedar Point (correct me if I’m wrong). If so, I think I’ll love Maverick just as much…if not more.

For all that it throws at you, Fahrenheit is a very re-rideable coaster.

The coaster does have some rattle to it, especially in the back car. However, the layout and pacing more than made up for any shortcomings.

I first rode Great Bear at night and was very impressed by the coaster’s layout and pacing. I found the sustained speed and the snappiness of the second half made for a great Bolliger & Mabillard invert. 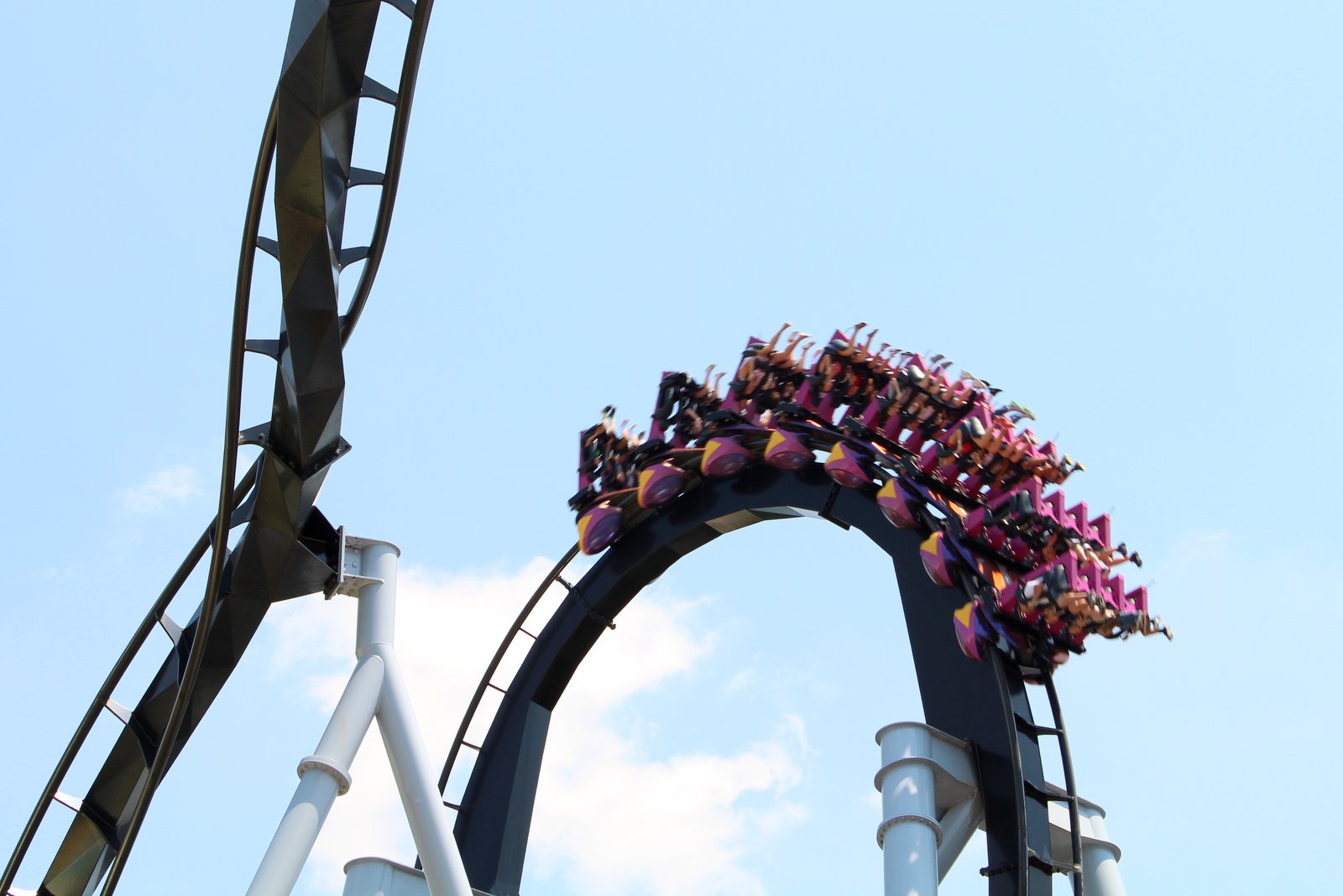 Great Bear has one of the loudest “B&M roars” that I’ve ever heard — and I love it. It’s one of my favorite coaster sounds. 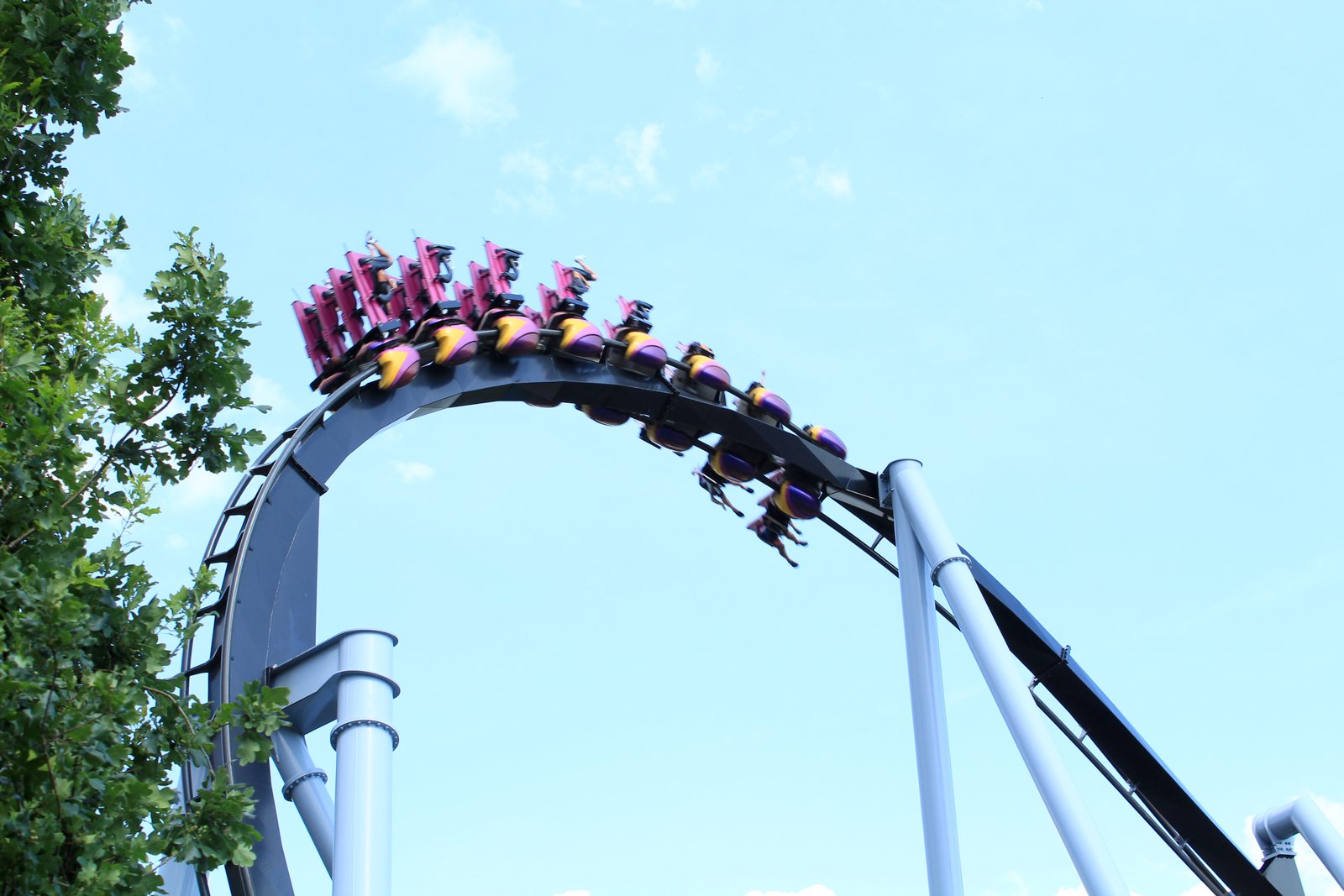 I rode it again during the day and found the finale to be less intense than I had remembered it being. Still, it was an excellent coaster made even better with its location and interaction with the park.

Unfortunately, I didn’t get many photos of Sooperdooperlooper. It weaves behind and under Great Bear, which is a total show stealer.

However, I was able to snag a nighttime ride on the classic Schwarzkopf looping coaster, which is celebrating its 40th birthday this year. 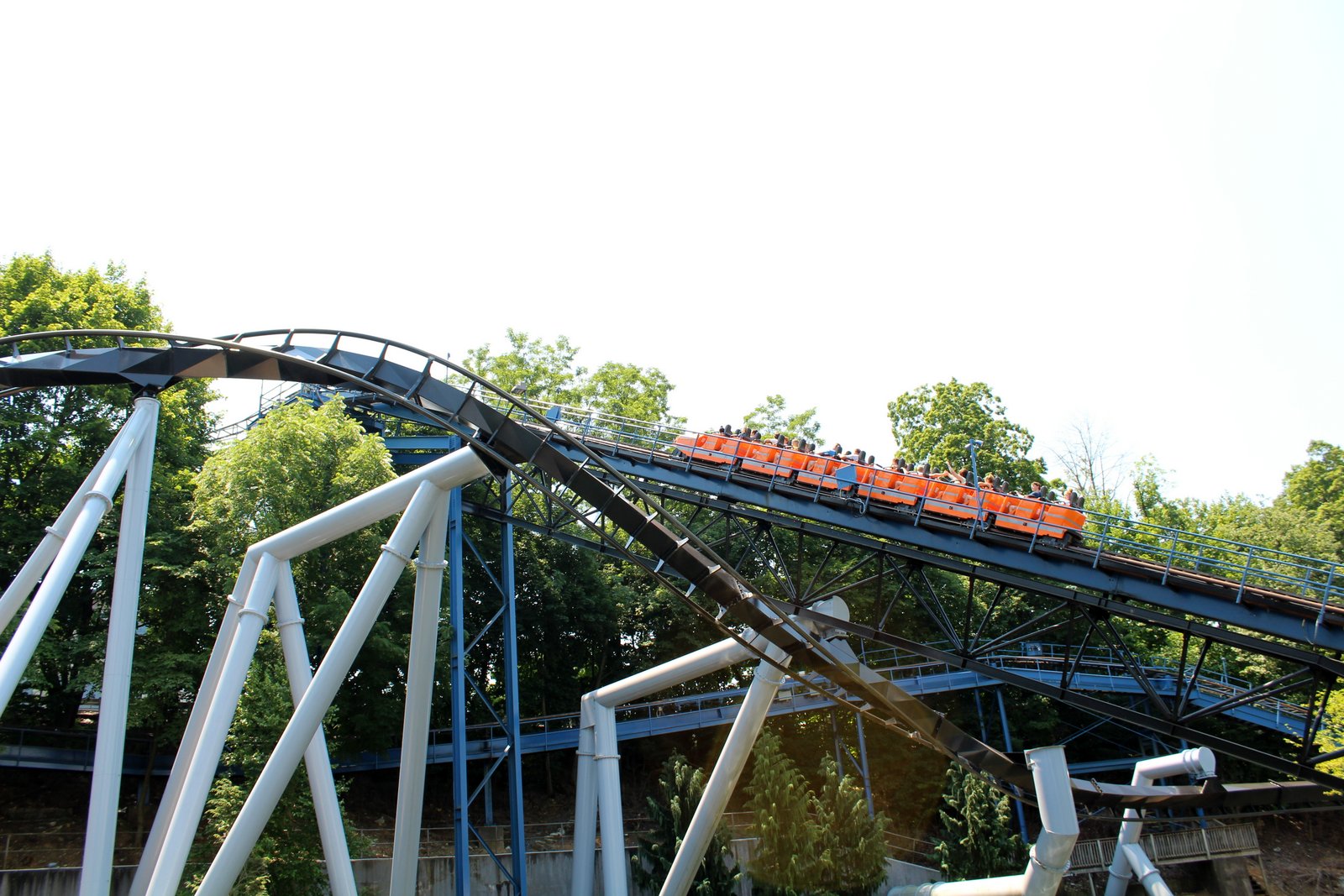 There was nothing groundbreaking about Sooperdooperlooper.  But its modest 2,600 feet of track makes for a sufficient length.

It wasn’t my favorite Schwarzkopf looper, but it was enjoyable and, like Great Bear, I loved its setting. It’s a perfect coaster for a junior coaster enthusiast.

As you can tell by the only photo I have of Trailblazer below, I didn’t spend too much time with this 1974 Arrow mine train coaster. I actually rode it at night during my “preview” of the park. 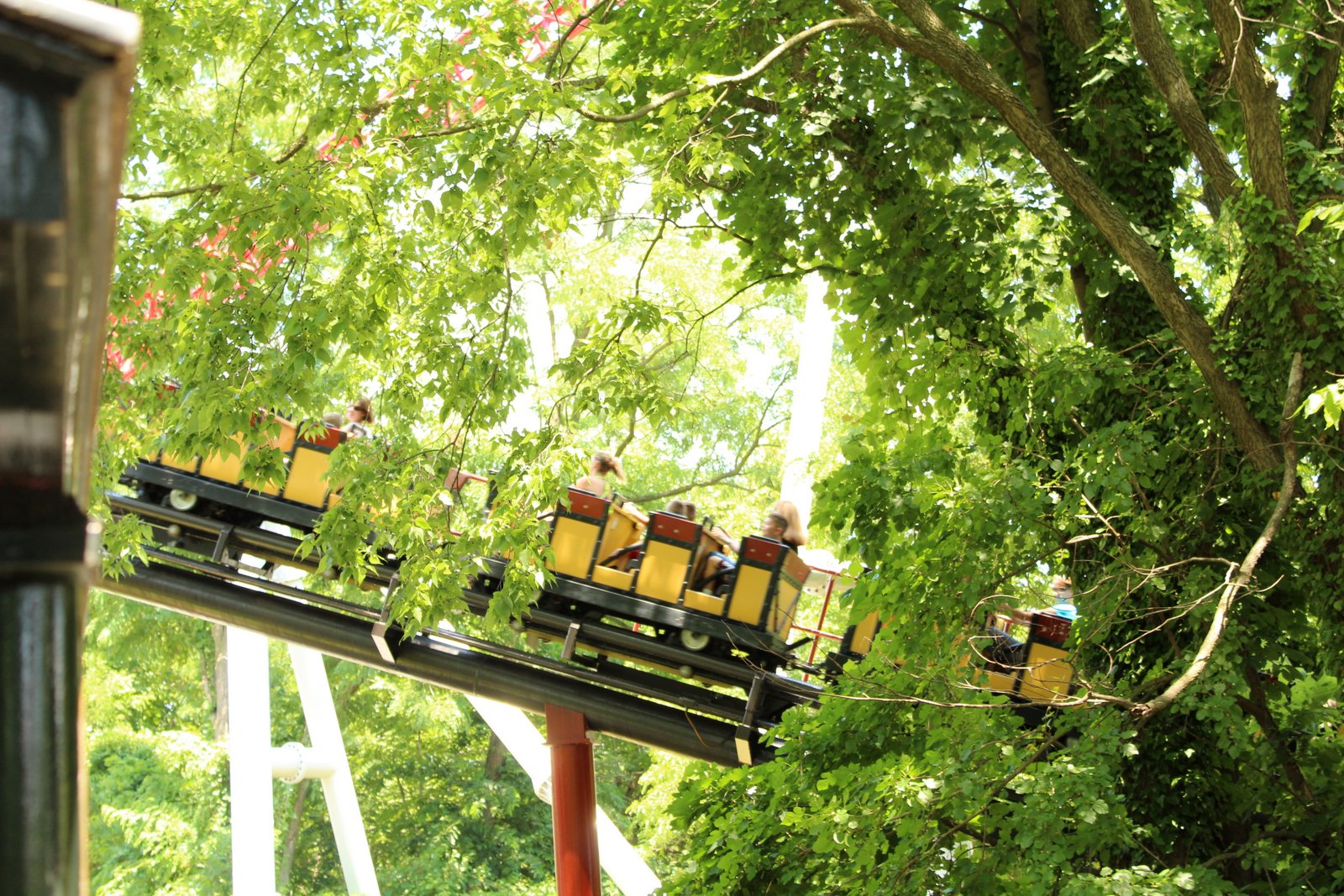 It was fairly standard — nothing special, but still a fun ride through a wooded section of the park.

I’ve said it before, and I’ll say it again: I don’t like spinning. It gives me a headache, and, if I’m not careful, can ruin a day at the park. So I was hesitant about riding it as soon as I got to the park, but I knew if I didn’t ride it then, the line would be too long.

That said, the spinning was tolerable. Dare I say that I actually enjoyed the coaster. The glow-in-the-dark scenery was fun, and I much preferred the layout to the popular Reverchon, wild-mouse style spinning coasters. The banked turns are terrific. 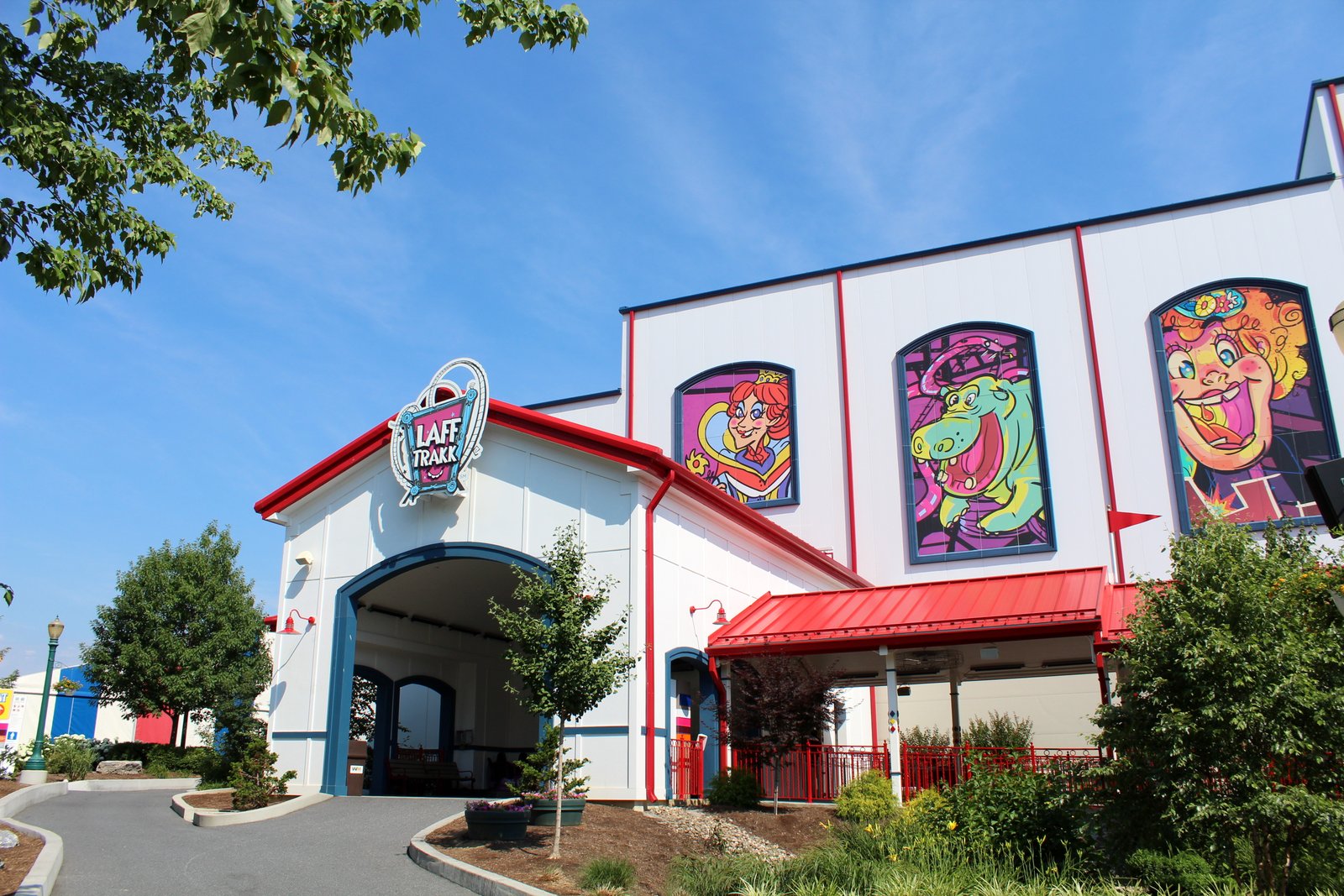 My one complaint with Laff Trakk were the very abrupt stops on the mid-course brakes. They were incredibly jarring, and at first I worried if something had gone wrong ahead. But by the end of my ride, I expected and was able to brace myself for the hard stops.

I can see why Laff Trakk keeps such a long line. It’s family friendly…and it only has seven four-seat cars.

But I’d ride it again if someone begged me to. Especially if it was a sweltering hot day.

While I found Laff Trakk to be borderline enjoyable, its Wild Mouse neighbor was considerably less fun. I’ve ridden countless of these types of coasters, so I knew what I was getting myself into. They’re not terrible rides, but if I never rode a wild mouse-style coaster again, I’d be just fine. 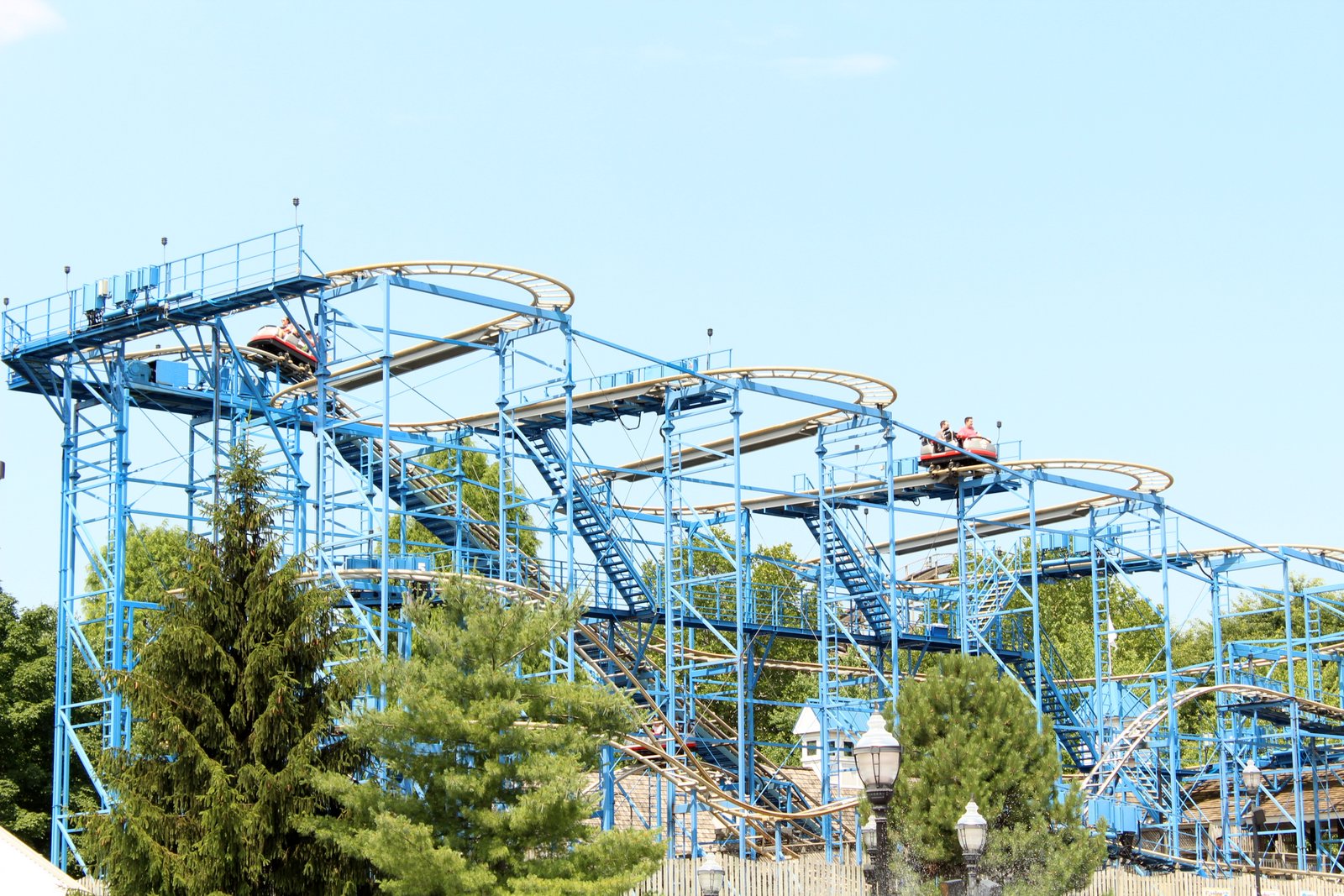 With Laff Trakk so close, I can’t imagine Wild Mouse sticking around the park for too long, especially with a popular waterpark area (possibly expanding in 2018) encroaching on its territory.

Ah, the Vekoma boomerang — Hersheypark’s version of this popular “coaster clone” is known as Sidewinder. I actually rode my first Vekoma boomerang at Carowinds in April. The new trains were supposed to give a more comfortable ride — I can’t imagine what the ride experience was like before. 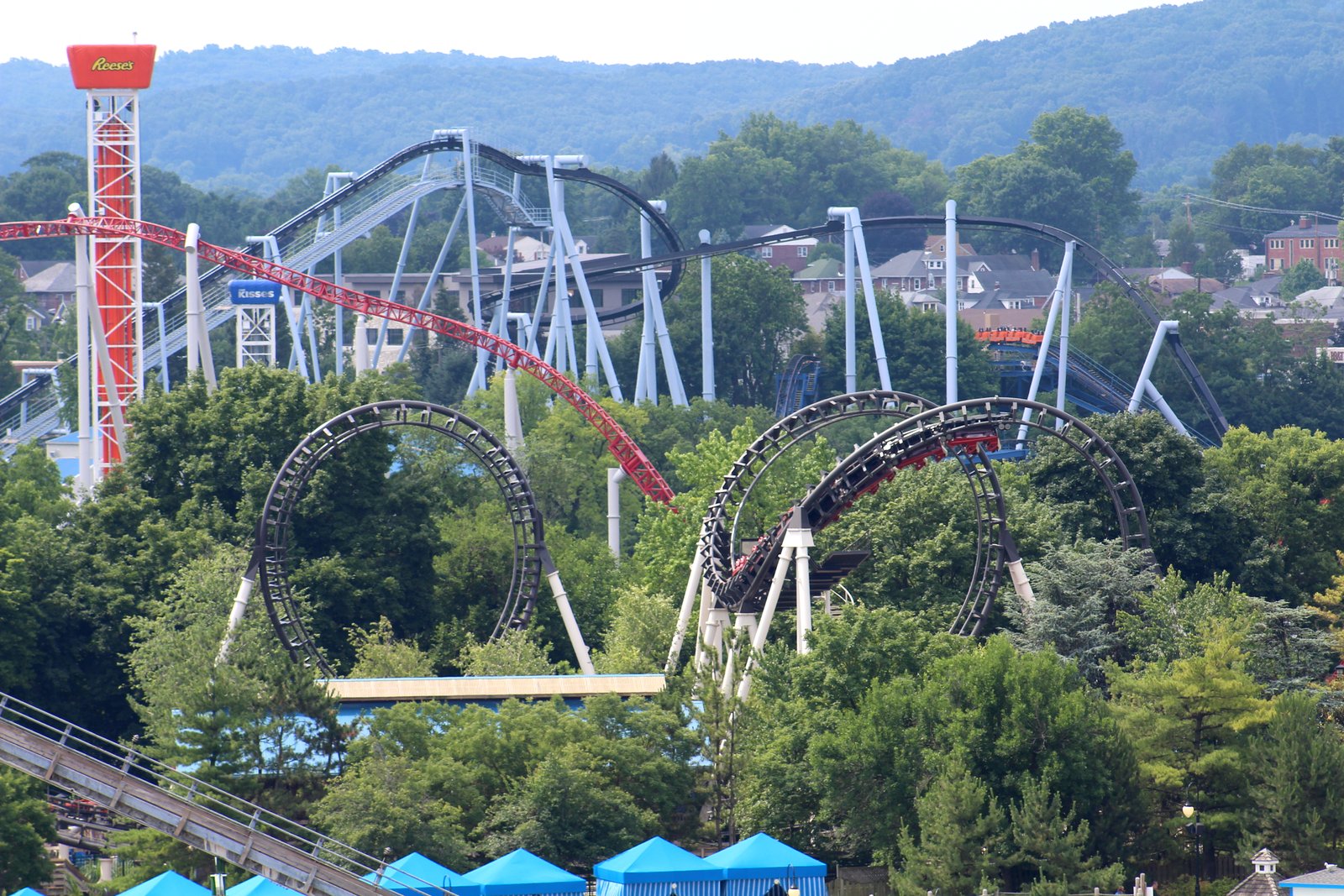 Sidewinder at Hersheypark also sported the new trains. I found the ride to be slightly smoother than its Carowinds clone, but still nothing that I would ever ride again. 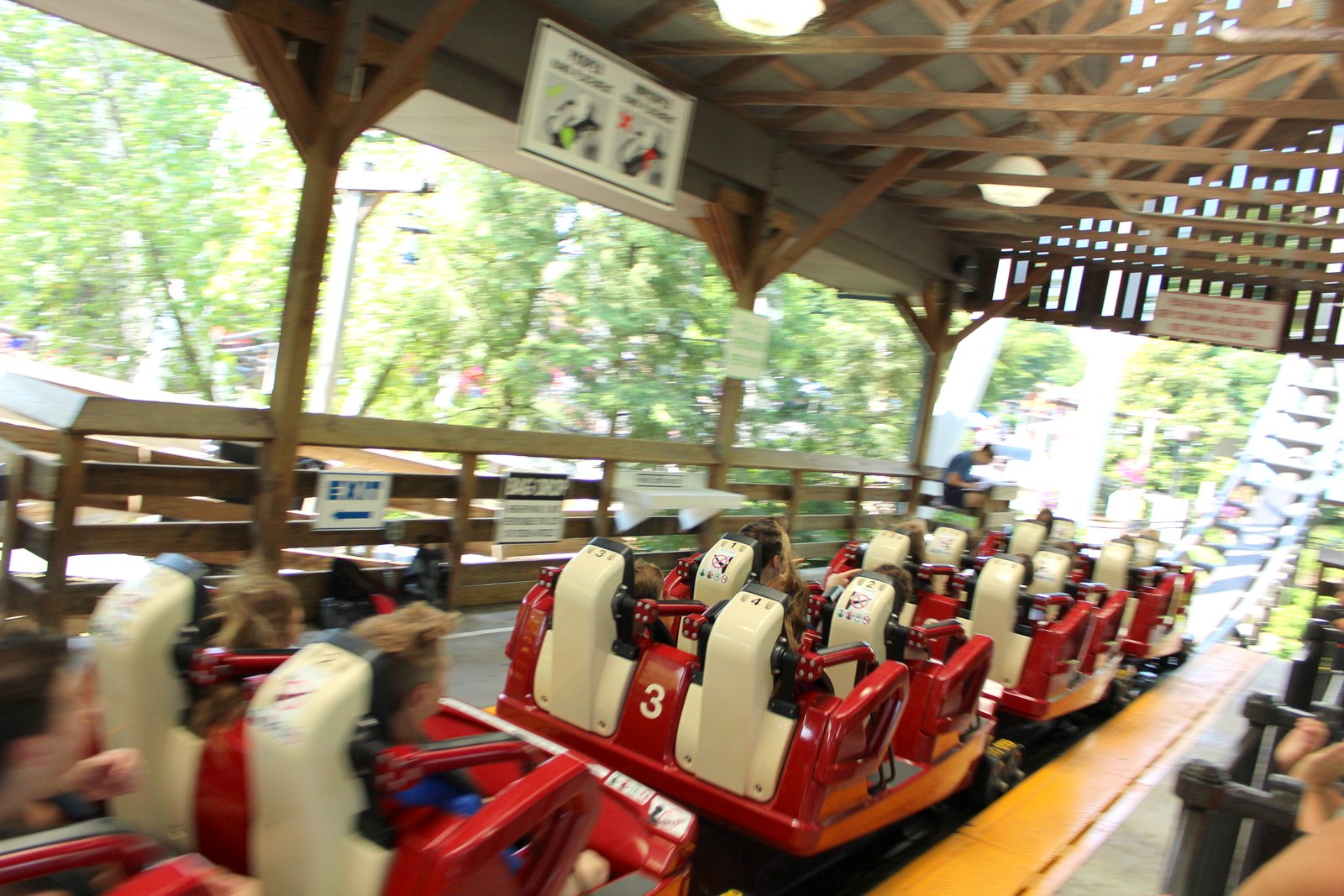 To say that I rode all of Hersheypark’s roller coasters, I had to take a spin on Cocoa Cruiser, which opened in 2014. 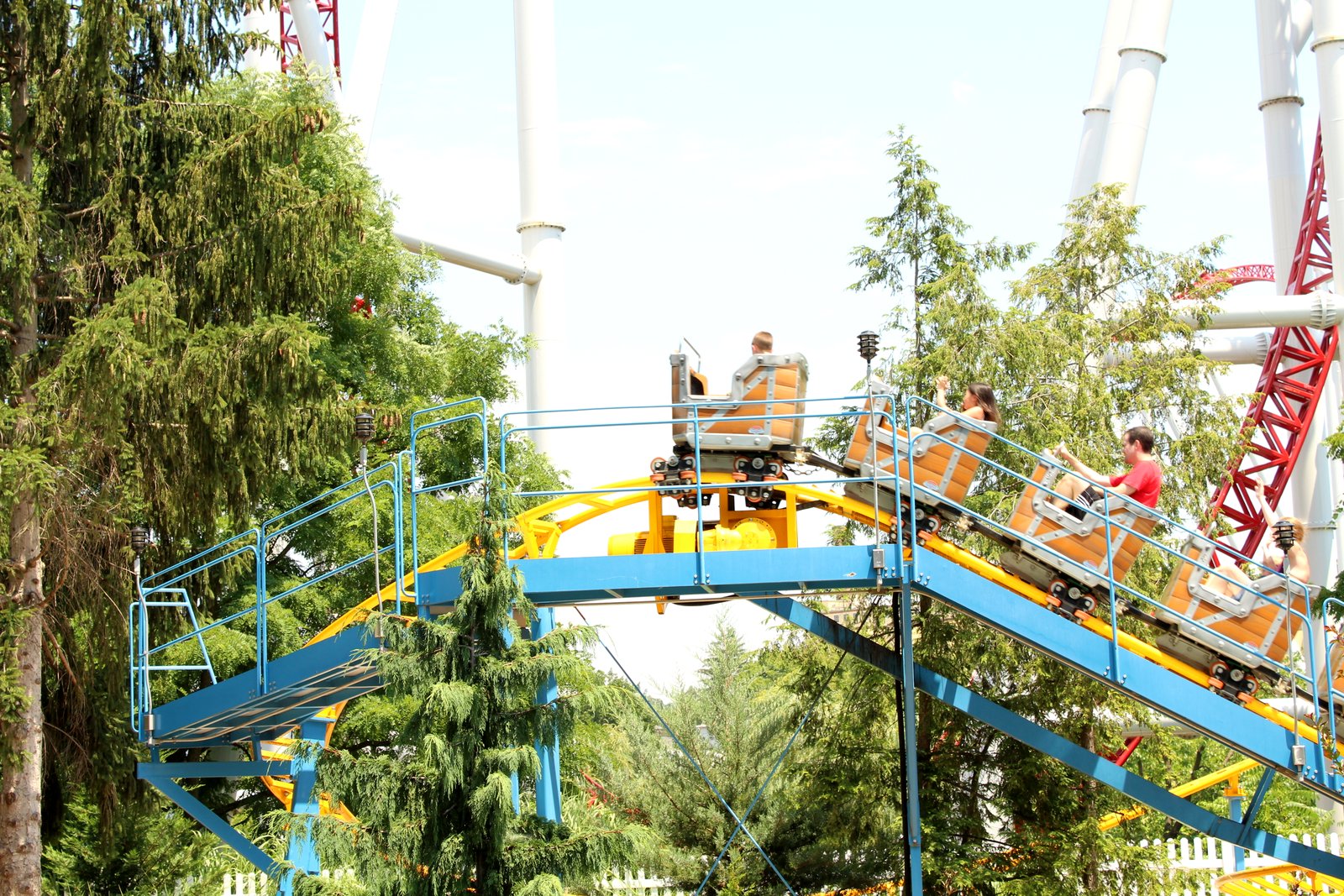 Of course, this was a run-of-the-mill kiddy coaster. It’s the same model as Dollywood’s new-for-2017 Whistle Punk Chaser, but Cocoa Cruiser was surprisingly smoother.

I’ve never ridden a dueling coaster before, so I was very excited to finally ride Lightning Racer. I’m a huge fan of Great Coasters International (GCI) coasters, so I figured that adding a dueling element would only make it better. 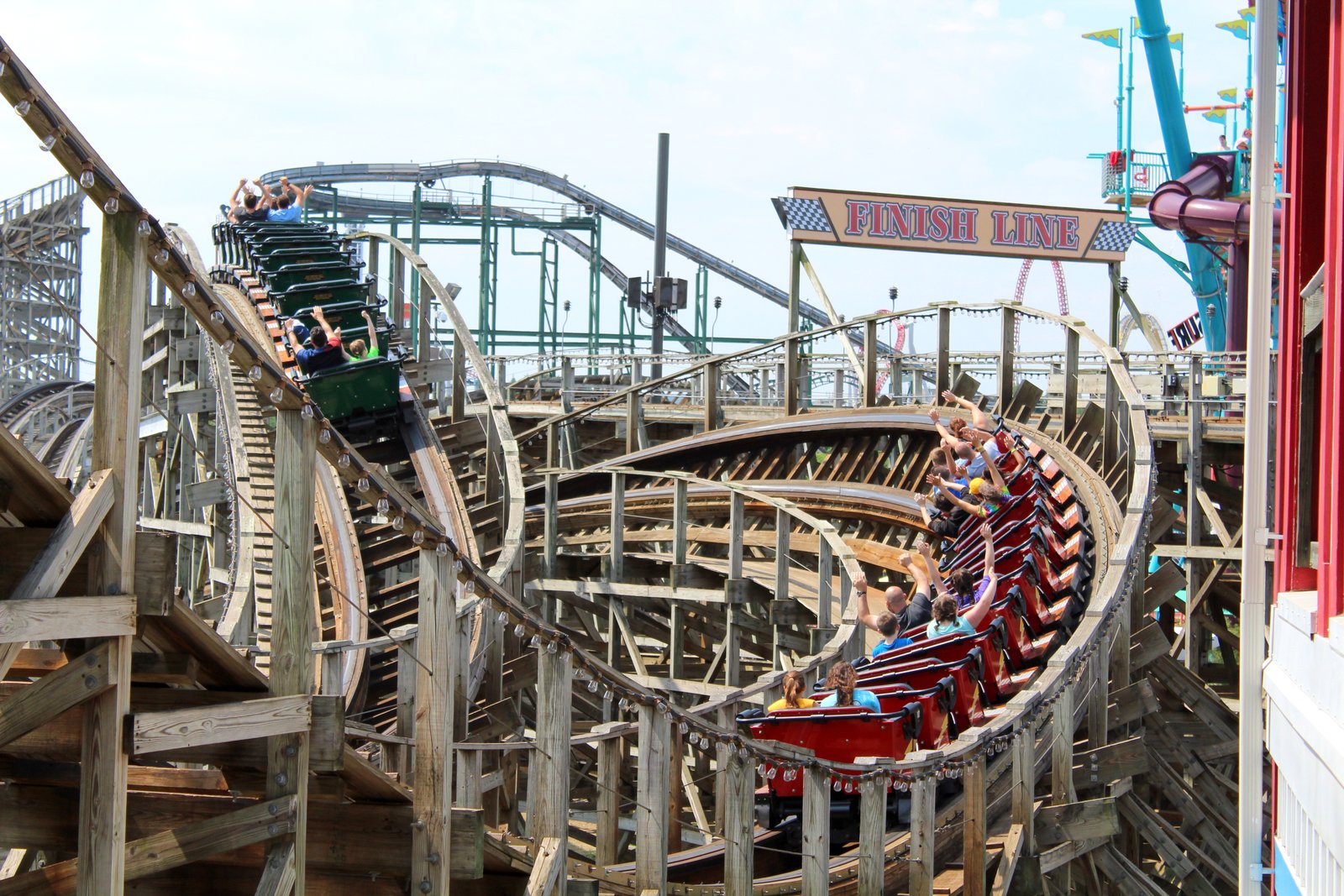 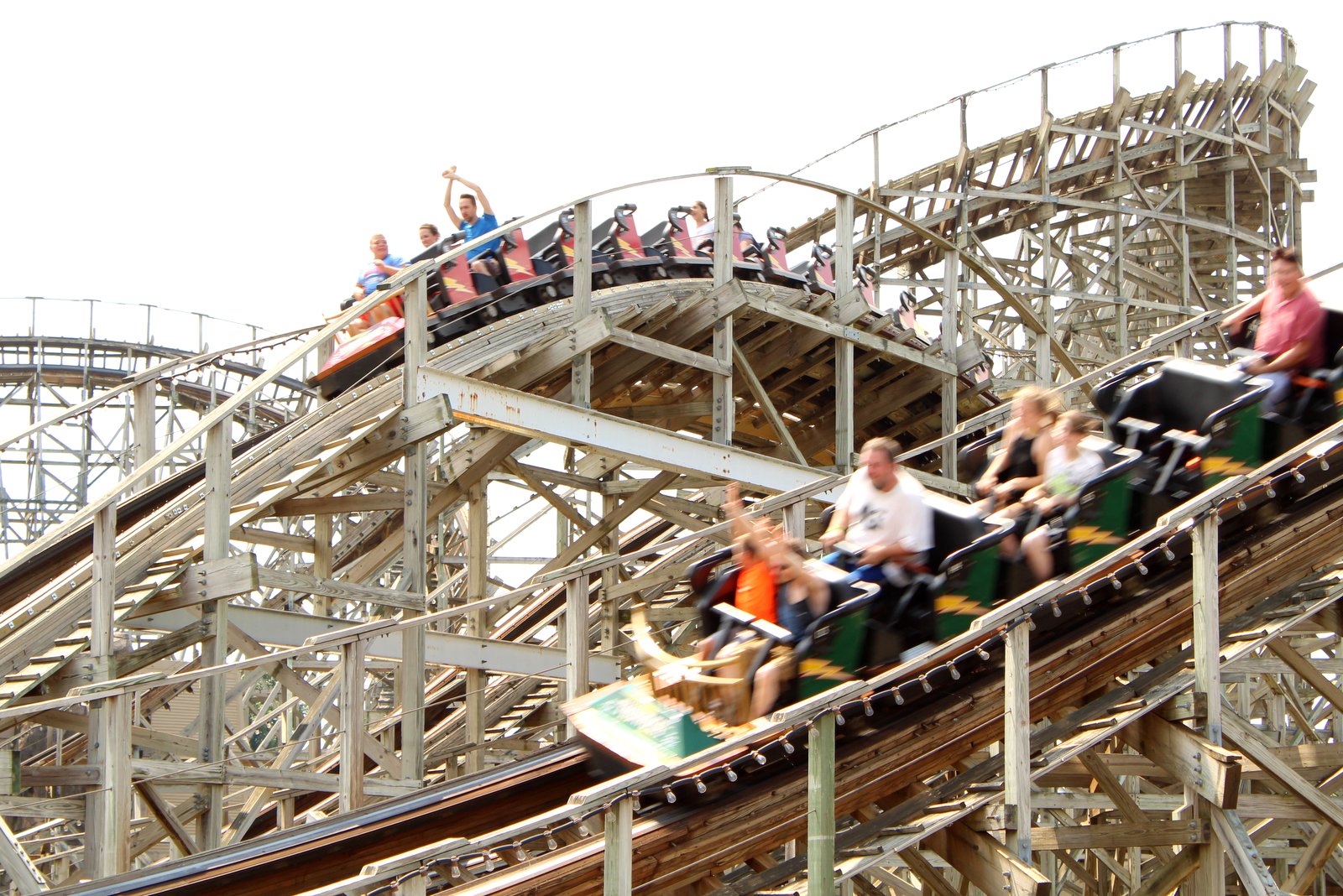 While I wasn’t able to choose a favorite between the Thunder and Lightning sides, I am confident in saying that they are both stellar.

I nearly forgot about Comet, the park’s oldest roller coaster, which opened in 1946. 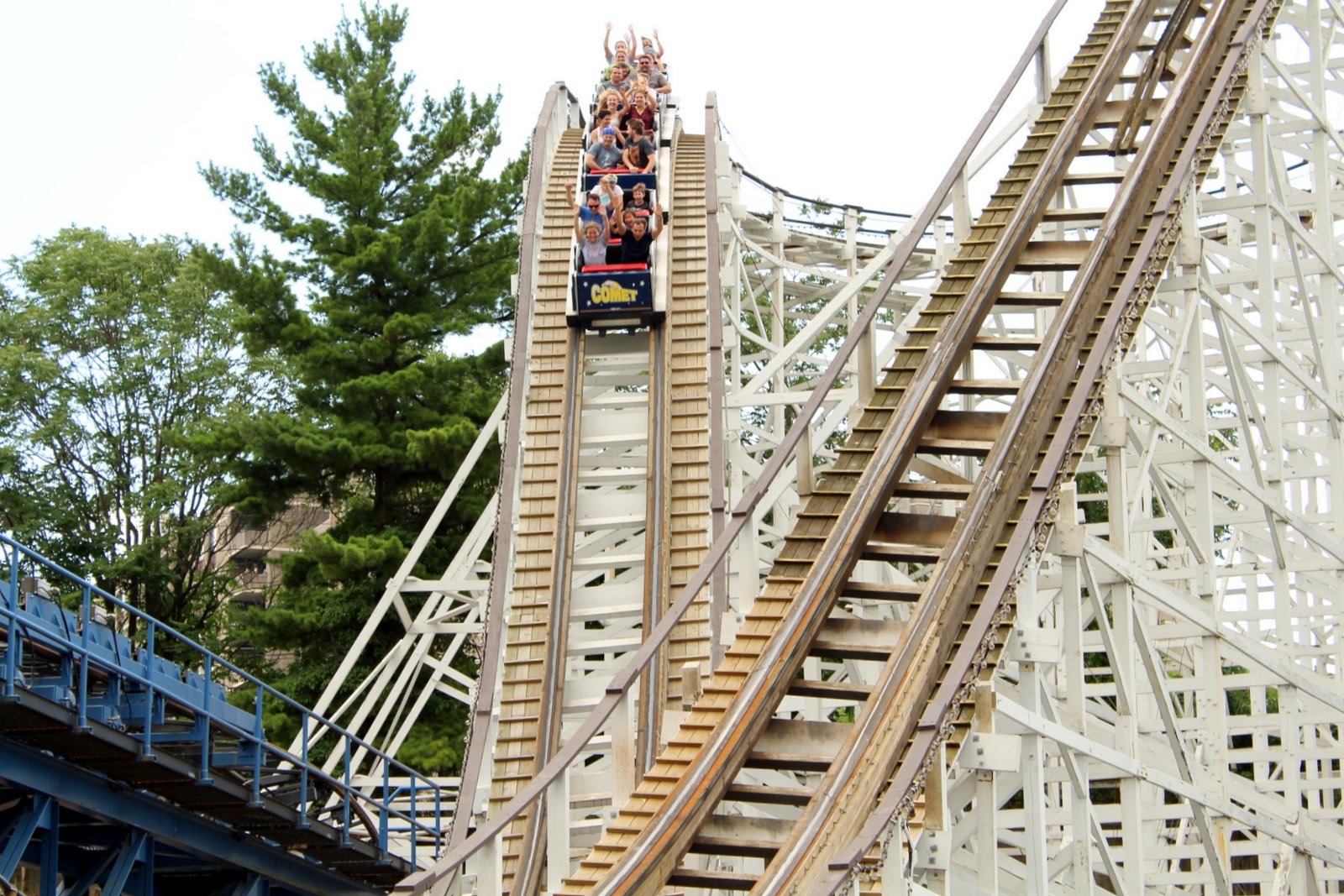 Comet stands in the shadows of Skyrush, so it is easily missed. But it holds its own very well — don’t let its unassuming looks fool you. The coaster provides a decent amount of air time, especially in the front seat. 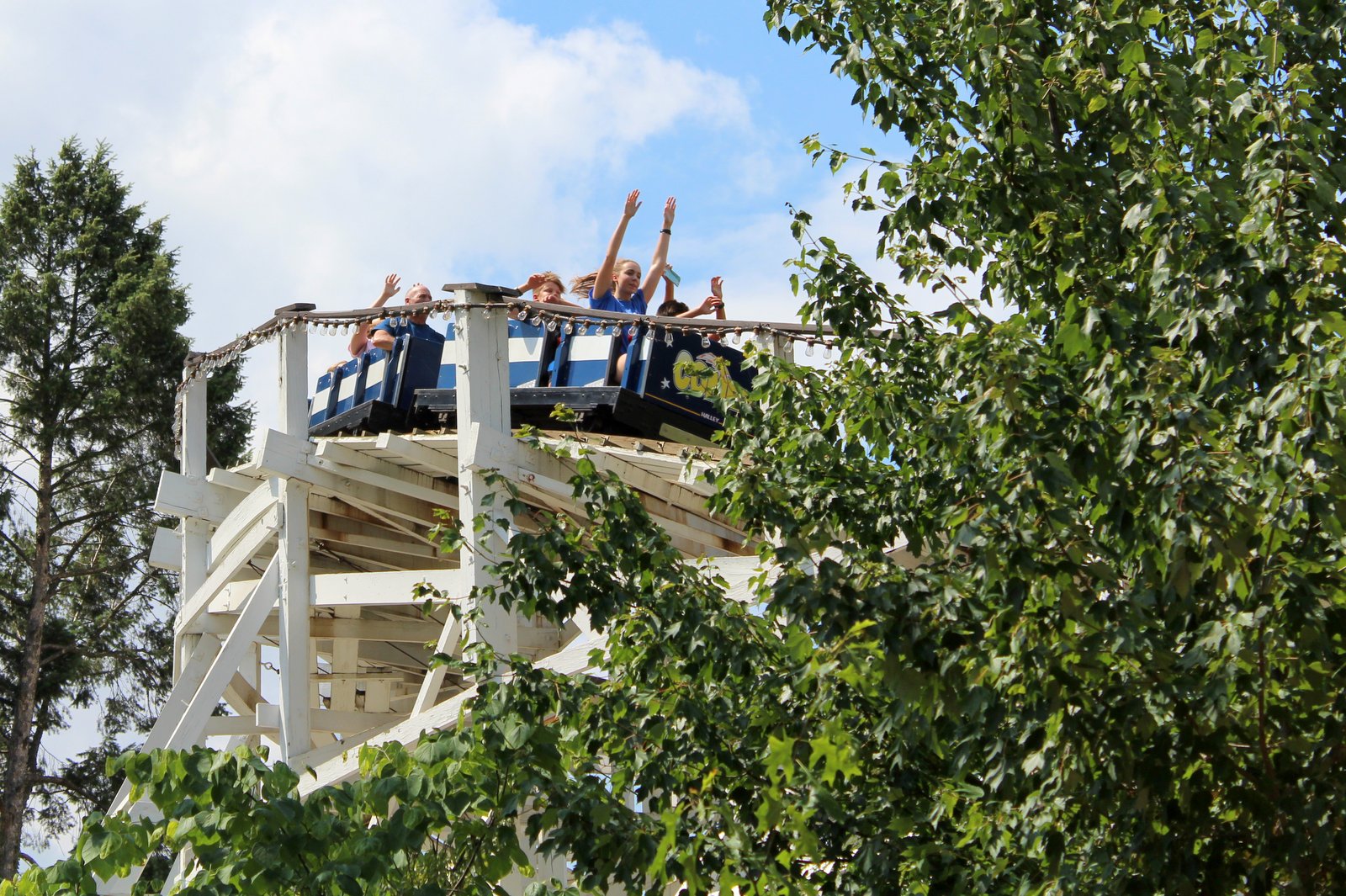 It maintains its speed all the way to the curved brake run, something that I haven’t seen before. And its 3,360 feet of track make for a relatively lengthy ride.

Hersheypark may be limited in its historic coaster offerings, but Comet provides a healthy dose of that old-school wooden coaster nostalgia that every amusement park needs.

I was unaware that Wildcat was GCI’s first coaster. And as a huge fan of their work, I was excited to see where it all began. 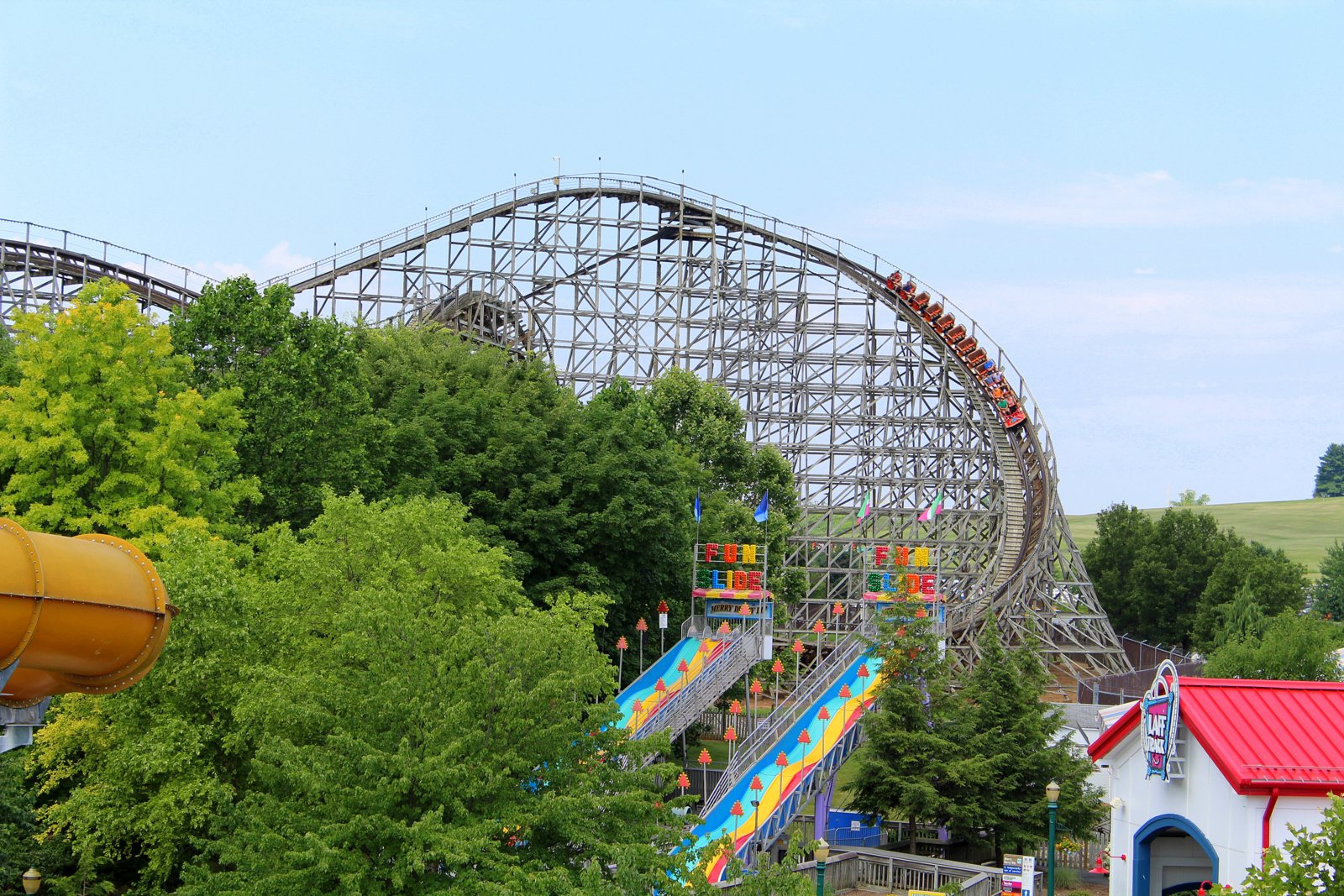 I enjoyed Wildcat — the first of the park’s wooden coasters that I rode. I loved its hilltop setting, which provided a great view of the park. 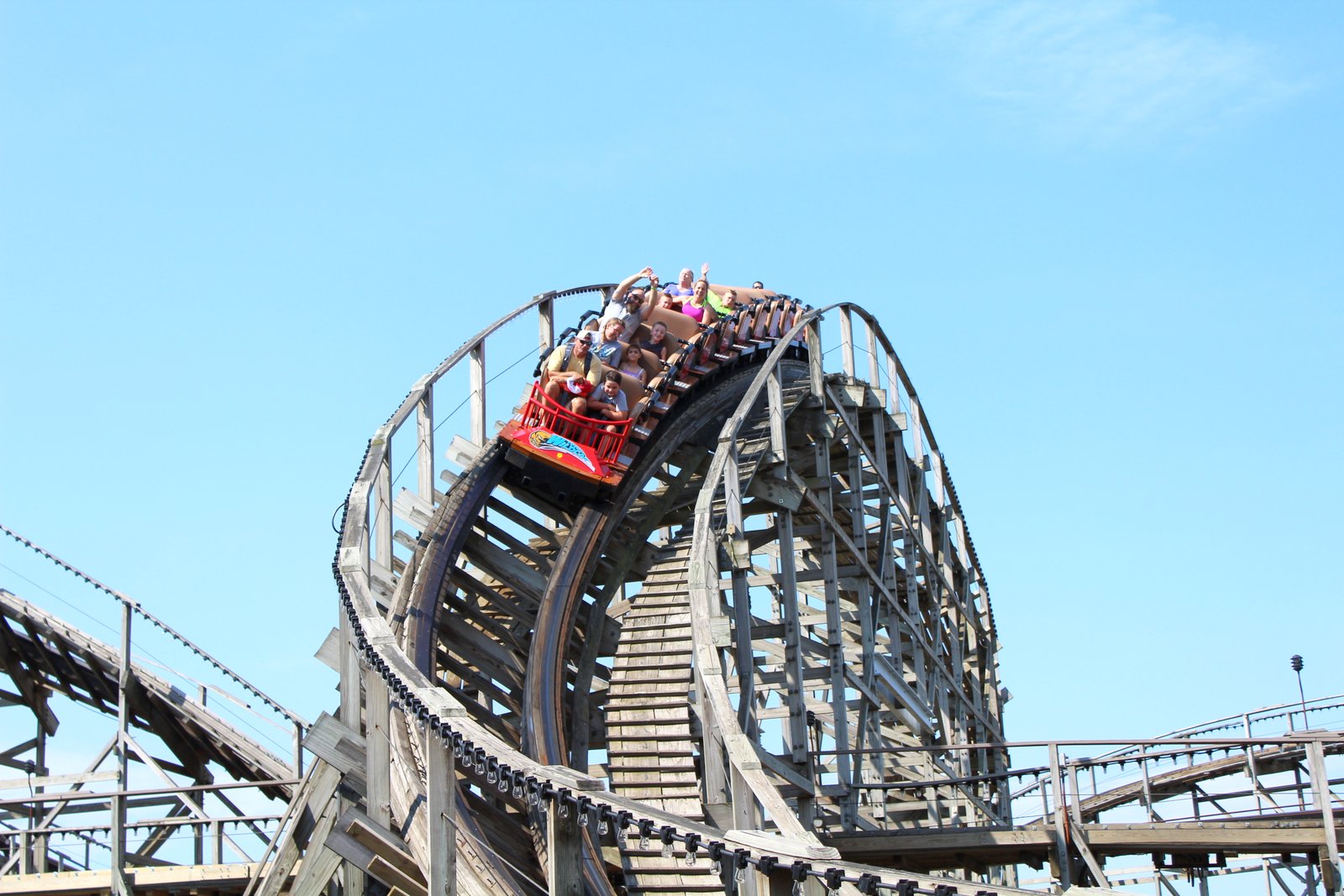 It wasn’t a perfect coaster. It was rough around the edges — I have no doubt that replacing the older, Philadelphia Toboggan Coasters (PTC) trains with GCI’s flagship Millennium Flyer trains in 2007 made a huge difference. Regardless, the layout was great, and I’d ride it again in a heartbeat.

How do you rank Hersheypark’s roller coasters? Share your ranking in the comments section below.