In the last edition of Coasters-101 we discussed how roller coasters are raised to their highest point via lift hills. Today we’re going to examine a more thrilling alternative to the traditionally slower lift hills: launch systems! Limitations like height restrictions, confined real estate, or cost may prompt an amusement park to choose a launch system versus a gigantic, space eating lift hill. Potential energy is stored as electricity or compressed air before it is transferred very rapidly to the train via a propulsion system and converted into kinetic energy. Types of launch systems include electromagnets, pneumatics, hydraulics, flywheel, catapult, and friction wheel.

Electromagnetic propulsion uses strong electrical impulses to attract or repulse magnetic fins attached to the vehicles. The stator and rotor are laid out in a line (as opposed to a torque or rotation) which produces a linear force and contains no moving parts. This propulsion system is fairly popular because it offers a very precise control of speed. The acceleration from the launch is greatest at the beginning and dies off rapidly towards the end of the launch. There are two types of electromagnetic propulsion used on roller coasters: linear induction motors (LIM) and linear synchronous motors (LSM). 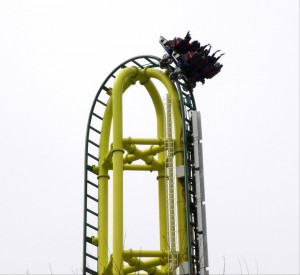 Linear Induction Motors use multiple sets of high powered electromagnets secured to the track. A gap is left in-between the middle of each set of magnets. Alternating current (AC) is applied to the magnets to create a magnetic field. A metal fin attached to the bottom of the train passes through the gap in the magnets while the magnetic field creates a wave for the fin to ride and propels the train down the track. In 1996, Flight of Fear at Kings Island became the first roller coaster to use LIMs.

Linear Synchronous Motors use the basic magnetism theories of attraction and repulsion. Strong, permanent, rare-earth magnets (those which come out of the ground magnetized) are attached to the train. As with LIMs, secured to the track are electro-magnets. When the train approaches one of the track-magnets, the track-magnet is set to attract the magnets on the train, pulling the train forward. After the train passes over the track-magnet, the track-magnet is reversed to repel the train magnet, pushing the cars down the track.  Multiple sets of electro-magnets on the track must be fired in sequence, switching polarity very quickly by the use of computers and electricity, in order to propel the train to top speed. An example of a LSM powered ride is Superman: The Escape at Six Flags Magic Mountain in Valencia, California. It was also the first roller coaster to reach speeds of one hundred miles per hour (though the track is not a complete circuit).

LIM and LSM drives are elegant, robust, and do not require much maintenance due to the lack of moving parts. However, they do draw a huge peak power. There’s only so much current that can be pumped into a stator before it reaches its limit. Temperature goes hand-in-hand with this as well because the harder a single stator works, the hotter it’s going to run. Both forms of linear motors operate with an air gap between the stator and rotor. The linear synchronous motor can operate with a larger air gap due to the fixed magnetic field in the reaction plate. The maximum speed of the launch is limited by several factors. For instance, land available for the launch track limits the number of stators and ultimately how fast the top speed can be. 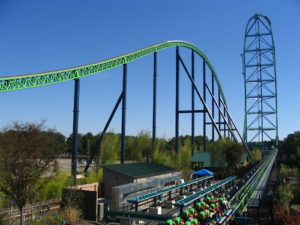 Hydraulic launch systems utilize a catch car, called a sled, connected to a cable which latches on to a mechanism attached to the underside of the coaster train. The catch-car moves in its own track or “groove” in the center of the launch track. The hydraulic motor is located at one end of the launch track and the waiting train at the other. Think of it like a giant fishing pole that reels a train in super-fast before being released.

At launch, the fluid under pressure from the accumulators is used to drive either sixteen or thirty-two hydraulic motors connected to an internal ring gear. The power from all of the motors is transferred to the giant cable drum by a planetary gearbox. The cable drum spins, rapidly winding the cable attached to the sled hooked under the train, accelerating it in a matter of seconds. The train is released from the sled and speeds through the rest of the layout but the sled and cable drum must decelerate rapidly and then return to their initial starting positions to launch the next train.

Typically, there are two sensors mounted to the top of the tallest hill immediately after the launch track. The distance between the two sensors is known so the control system can take that value and divide it by the time it takes the train to get from one sensor to the other. This gives the computer the train’s speed going over the top of the hill. For every single launch, the information is recorded and plotted on a performance curve. The computer takes the average speed of the three previous trains and compares it to past launches in order to determine the power to give to the hydraulic motor. This way, if the first three trains are filled with swimsuit models and the fourth train is carrying football players the power is enough to get the car over the hill.

Hydraulic launch systems are considered capable of giving a far greater and smoother acceleration than current electromagnetic propulsion styles. The acceleration from a hydraulic launch remains nearly constant throughout the entirety of the launch. However, the number of moving parts makes this system generally less reliable than magnetic systems that contain no moving parts. Hydraulic launch systems have the highest power and are compact but the whole cable drive part is not trivial due to the forces and speeds. Formula Rossa at Ferrari World in Abu Dhabi, United Arab Emirates is currently the world’s fastest roller coaster thanks to its hydraulic motor, achieving an amazing speed of 149 mph (240 km/h) in 4.9 seconds!

Pneumatic launches are very similar to hydraulic launches, the major difference being air is compressed instead of nitrogen gas or oil. Acceleration is nearly constant but the resulting loud noises caused by the whooshing air can be an annoying issue for theme parks. Pneumatic systems are technically simpler than hydraulics but are also less powerful. Dodonpa at Fuji-Q Highland in Japan is capable of launching passengers from 0 to 106.9 mph (171 km/h) in 1.8 seconds using compressed air!

Electro-magnetic, pneumatic, and hydraulic launch systems are the most popular types of acceleration technologies today as they are much more efficient and powerful over the older and less common launch systems. Catapult launches involve a large diesel engine or a dropped weight winds a cable to pull the train until it accelerates to its full speed. Flywheel launchers utilize a large flywheel (a device used to store rotational energy) that is spun at high speeds and is attached to a cable that propels the train forward. Friction wheel launches have a launch track that consists of a series of horizontal tires that spin in opposite directions. They pinch the metal fins on the underside of the train, much like a baseball pitching machine. The Incredible Hulk coaster at Universal’s Islands of Adventure in Orlando, Florida is a perfect example of a friction wheel launch coaster. However, a great deal of power is needed to propel the 32 passenger train from 0 to 40 mph (64 km/h) in 2.0 seconds. 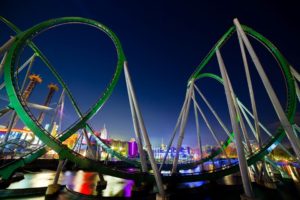