How do roller coasters reach their highest point? The chain lift is the traditional method of pulling a coaster car to the top of the tallest hill. A catch on the bottom of the train, called a “chain dog”, engages a chain running in a trough fixed to the center of the track. An electric motor pulls the vehicle to the top of the tallest hill where its potential energy is now great. The clack-clack-clack sound you hear as a roller coaster train ascends the lift hill is due to a safety feature known as the anti-rollback (ARB) dog. This device locks into a step arrangement mounted on the lift hill and, in case of chain failure, will hold the entire train in place. Many theme parks nowadays desire to keep their rides as quiet as possible, either to keep their neighbors happy or so as not to ruin the thematic experience. Some coaster manufacturers use “silencers” such as coating the end of the ARB with urethane or plastic caps as a simple and inexpensive way to dull and deaden the metallic clanking sound. Others use more complicated mechanisms with rails and axles or even magnets.

A relatively new variation on the chain lift is the cable or elevator lift. This system allows for a faster and steeper lift hill, which is often quiet because the anti-rollback devices are electromagnetically disengaged by the passing train and automatically close after it passes.Millennium Force at Cedar Point uses a cable lift on its 310 foot tall hill.

Some roller coasters use vertical lifts to gain their greatest potential energy. These special elevators typically lift a piece of the track straight up where it connects to the big drop or other following elements. This arrangement is mainly used to save space or to provide a unique experience. The Lost Coaster at Indiana Beach in Monticello, Indiana is a perfect example of a ride that utilizes a vertical lift.

Electric spiral lifts are special in that the vehicles themselves contain small electric traction motors to pull the trains up the hill. The cars engage with an electrified rail on the center of the lift track that provides power to the motors. To keep the weight down the motors have to be small so it is impractical to climb steep lifts, thus most lifts of this type are in an upward spiraling helix to maximize real estate and minimize the grade of the ascent. This system employs anti-rollback devices just as any other roller coaster and once at the top of the lift the train disengages the electrified rail and gravity takes over.

There is also another lift hill system called the Push Spiral Lift in which the track is also configured in an upward spiral. However, unlike the electric lift there are no motors attached to the cars. In this case the vehicles are literally “pushed” up the spiral lift hill. A central rotating structure inside of the spiraling track makes contact with a wheel on an arm attached to the vehicle. As the structure rotates the the wheeled arm rides up the structure until it reaches the top where the track pulls away from the structure and gravity takes over again. This technology is found in Zamperla’s Flying coasters, three of which exist in the North America, Soarin’ Eagle at Scream Zone (formerly the Flying Coaster at Elitch Gardens), Superflight at Rye Playland, and Timewarp at Canada’s Wonderland. 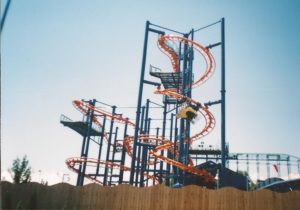 Another highly unusual device is the Ferris wheel lift to get the coaster vehicle to its highest point. One of these was actually built at Freestyle Music Park (now closed and formerly called Hard Rock Park) in Myrtle Beach, South Carolina. A single car was rolled out of the station and onto a short piece of track attached to a rotatable ring fixed to the inside of a Ferris wheel. The Ferris wheel would complete half a rotation while the track segment stayed upright the entire time thanks to the rotatable ring. After reaching the apex the car would be pushed off at the top into a high speed coaster circuit before returning to the station.

In the early days of coaster, lift hills were built in a straight line and angled between twenty and thirty degrees steep. There were very few variations and all looked nearly identical.  Nowadays, lift hills come in all shapes, sizes, and angles. Maurer Sohne builds some of the craziest looking lift hills including some that even go upside down! For example, on G-Force at Drayton Manor, riders are pulled up the first half of a vertical loop. After being released from the weird lift the vehicles finish the loop and complete the rest of the coaster’s twisted layout.

If you travel to Wales in the United Kingdom you’ll find one of the most energy efficient coasters in the world. The Green Dragon at GreenWood Forest Park is the world’s first people-powered roller coaster. It’s based on an old fashioned inclined railway system developed for mines and quarries intended to move heavy coal down steep slopes without having any external energy source. Here’s how it works:

Riders climb up to the top of a hill level with the coaster’s empty station where they board a funicular (or tram). The tram descends the hill on a track under the weight of the passengers. Through a system of cables and pulleys, the empty coaster train (which weighs less than the combined weight of the tram and passengers) is lifted to the top of the hill on a detached section of track. The passengers then disembark the tram at the bottom of the hill and have to climb another walkway back up to the loading station to board the coaster train. The empty track on which the train was sitting uses gravity to descend back down the hill to await the coaster train at the exit platform, pulling the tram back up to the station level in the process. It’s all about energy transfer: When the passengers climb to the top of the hill they gain potential energy. As the tram descends the potential energy is converted into kinetic energy to pull the train back up the hill.

Most of these systems are taken at a slower speed. In the next session of Coasters-101 we’ll talk about another, faster way to get to the highest point: launch systems! Read more Coasters-101 articles.