Within moments of stepping inside the Legoland New York Hotel, I could tell this was going to be one of the most tech-savvy, kid-friendly, and well themed resort hotels we’ve ever stayed. Over the past eight years, my family of four has had the pleasure of staying at numerous family-friendly resorts, from Disney and Universal, to non-theme park hotels like Bavarian Inn Lodge in Frankenmuth, Michigan and the Eden Resort in Lancaster, Pennsylvania. After a two night stay in October 2021, I can say without a doubt the Legoland New York Hotel is the best family hotel we’ve lodged in. Here’s a rundown of everything that makes the Legoland Hotel so great. 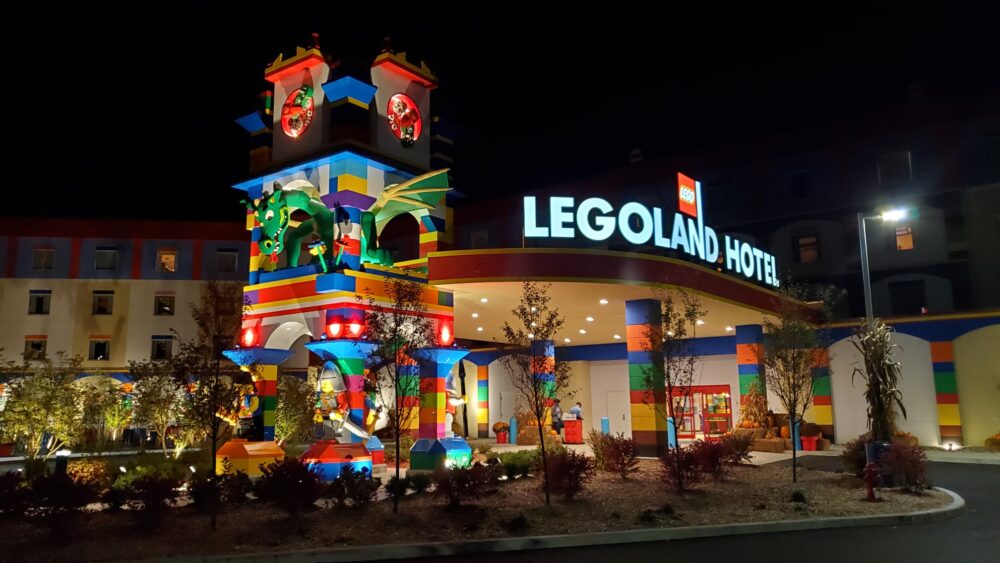 The Lego theming is apparent as soon as you pull up in front of the giant clock tower marquee. 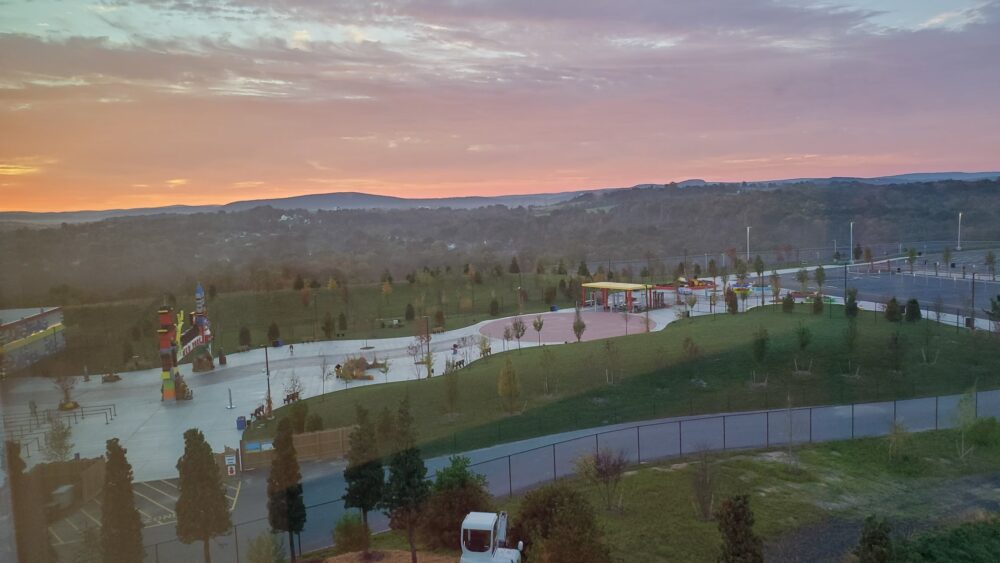 The entrance to the Legoland New York theme park as seen from the hotel.

The Legoland Hotel opened in August 2021 but everything still looked brand new and clean. 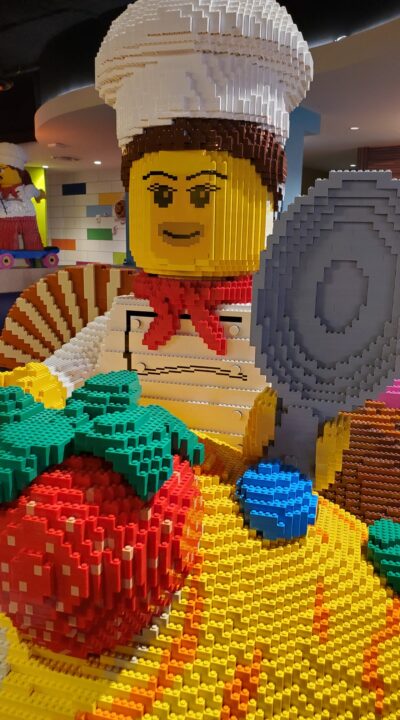 There’s no typical check-in counter like every other hotel. Simply scan a QR code that’s been emailed to you at a kiosk and your room keys magically pop out of the machine. The Lego theming is all around, even above you. The lobby even has a wall of hundreds of mini-figures. 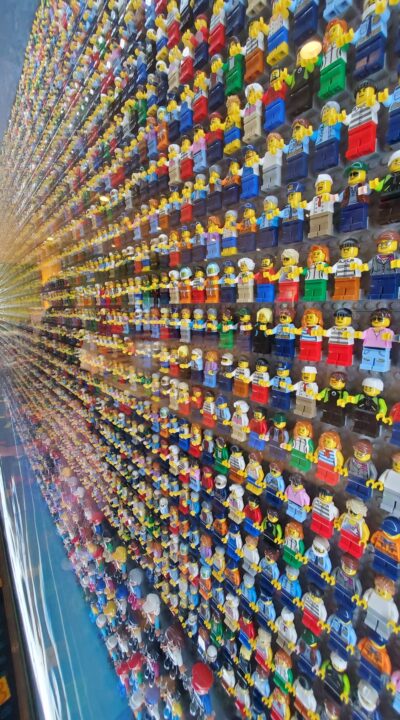 There’s a pirate/castle play place on the first floor with a giant pit of Lego. And for the adults there is a bar right next to it, so you can enjoy an adult beverage while keeping an eye on your kids. 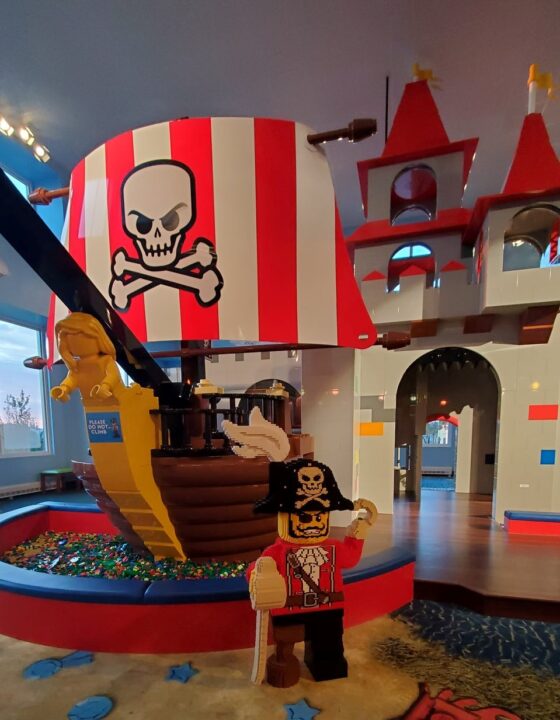 If you end up staying on the first floor, you’ll still want to ride the elevators at least once for the experience: there’s a disco party inside complete with music and dancing lights. Swipe your room key and the elevator knows what floor you’re on. 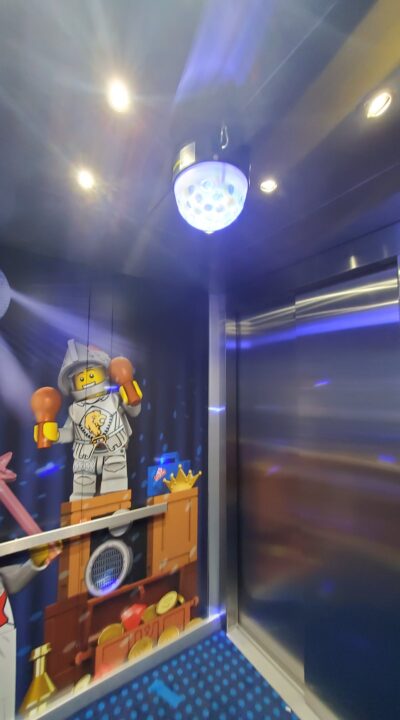 The Legoland New York Hotel has four floors and each has a distinctive theme: Castle, Friends, Ninjago, and Pirates. 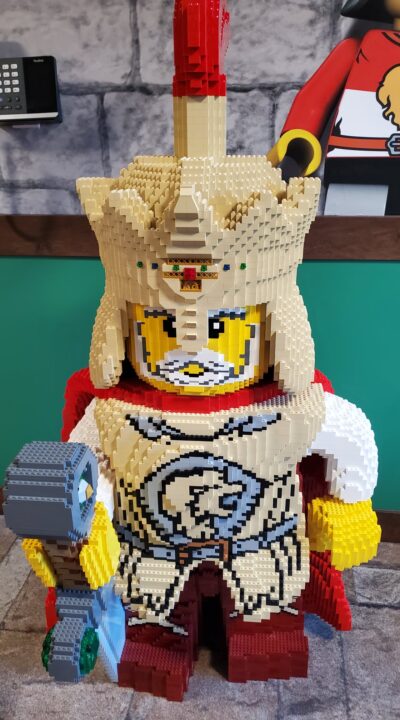 There are countless Lego models scattered all throughout the hotel. Even the rooms had Lego models in them. In fact, our pirate themed room had five Lego models. 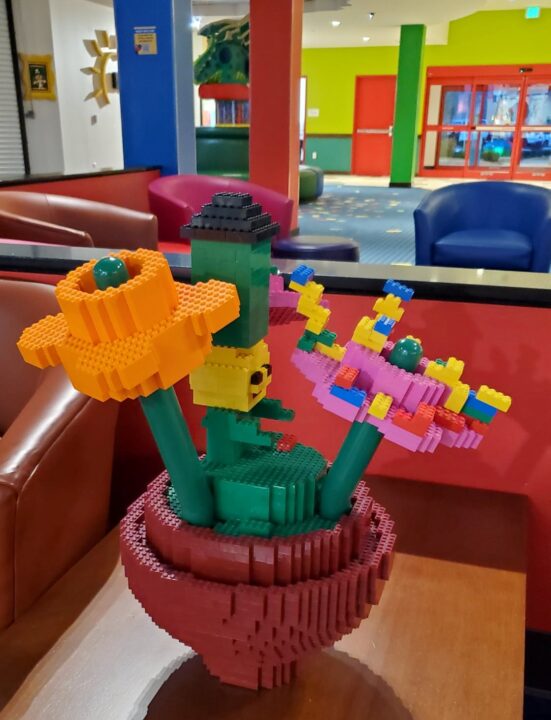 There’s also warning cards not to break any of the Lego models or you will have to pay to fix them. 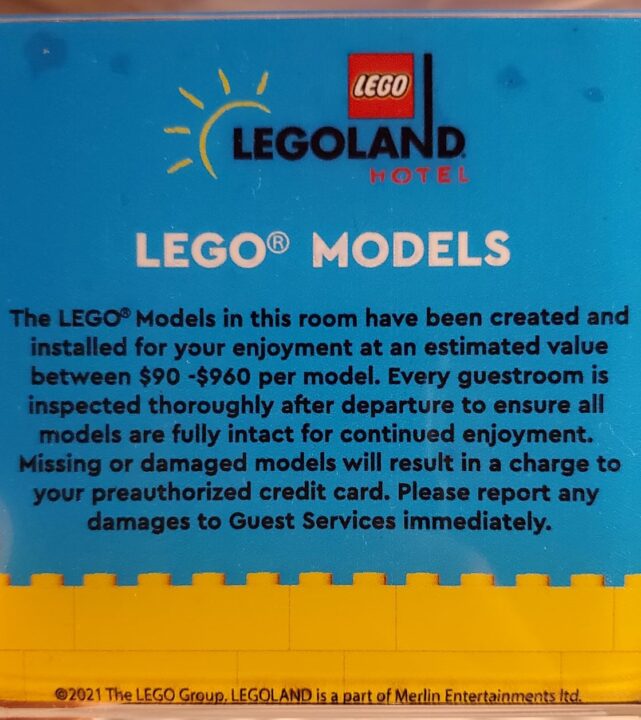 What really sets the Legoland Hotel apart from others is the design of the rooms and all the features included within them. 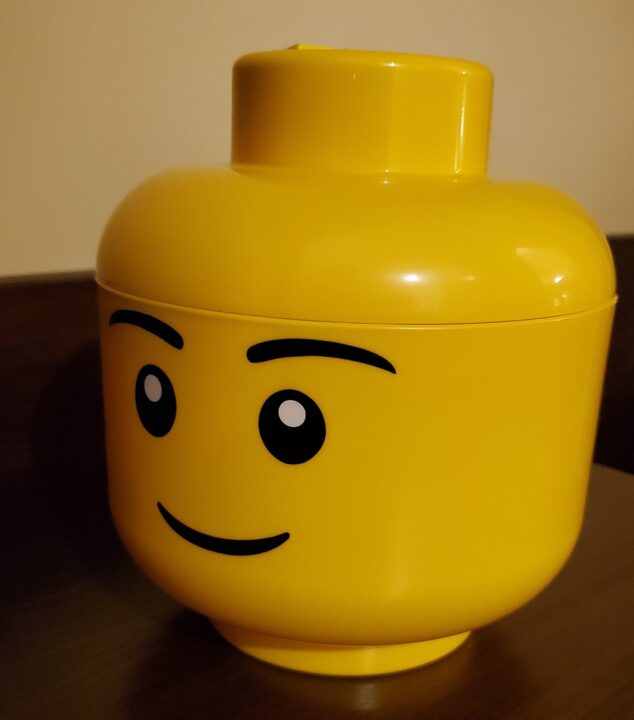 Even the ice buckets are themed!

I love my kids, but one of the best features of the room is separate areas for the kids and adults. After spending all day in the car and answering “are we there yet” a thousand times, you just need a reprieve. The kids get a bunk bed (which even includes a 3rd roll out bed on the floor if one is too scared to sleep on the top bunk), their own TV, and Legos to play with.

Complimentary snacks are provided with each room. 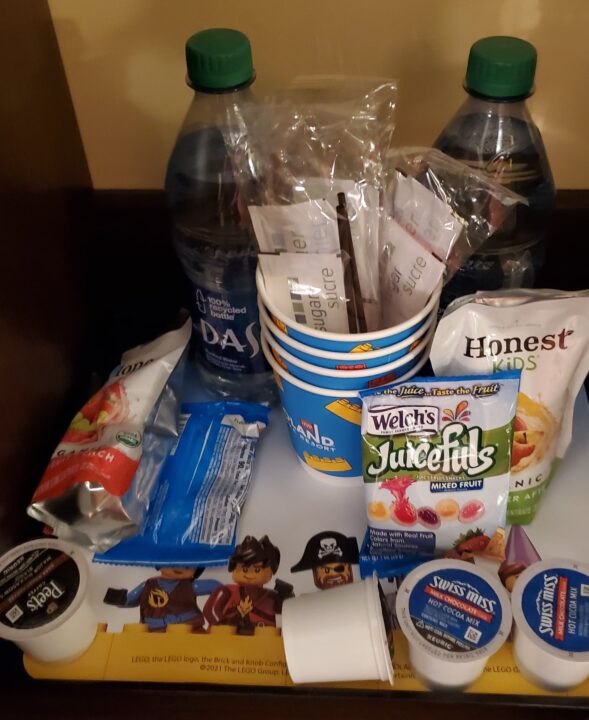 There’s a locked safe in the room. A card with a series of four clues the kids have to solve to get the 4-digit combination to unlock the safe. Inside the safe are more activities for the kids to do to help keep them busy. 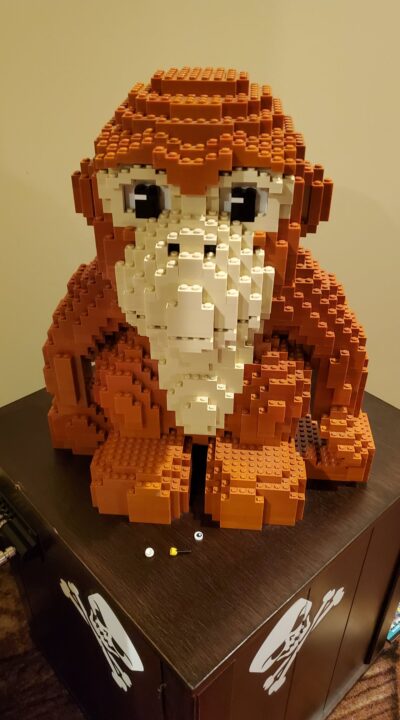 There’s no old fashioned telephone in any of these rooms, which I really appreciated. My kids always want to play with the phone in hotel rooms because they never see telephones anywhere. I’m always worried they’re going to dial 911 or rack up a huge room service bill, so I was pleasantly surprised to see each room has a voice activated Google Nest, which my kids already know how to interact with. 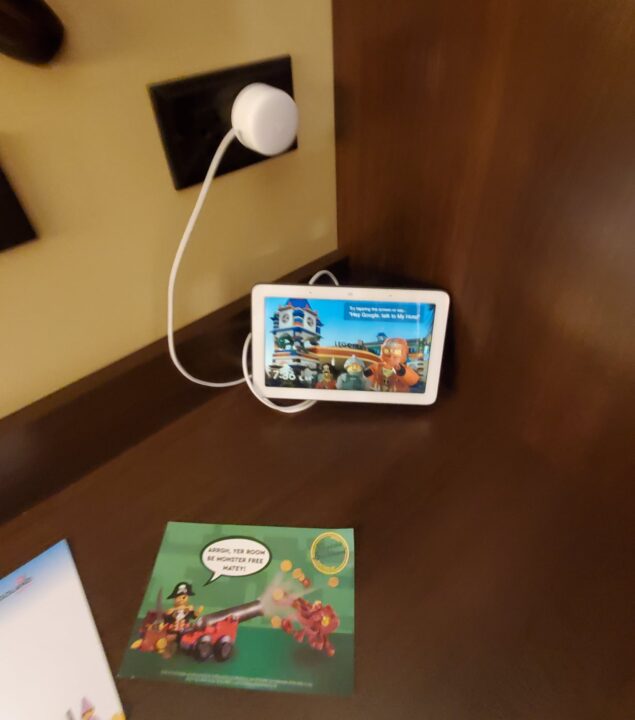 If you need anything from room service you simply text them. Breakfast is included in your stay at the expansive restaurant. 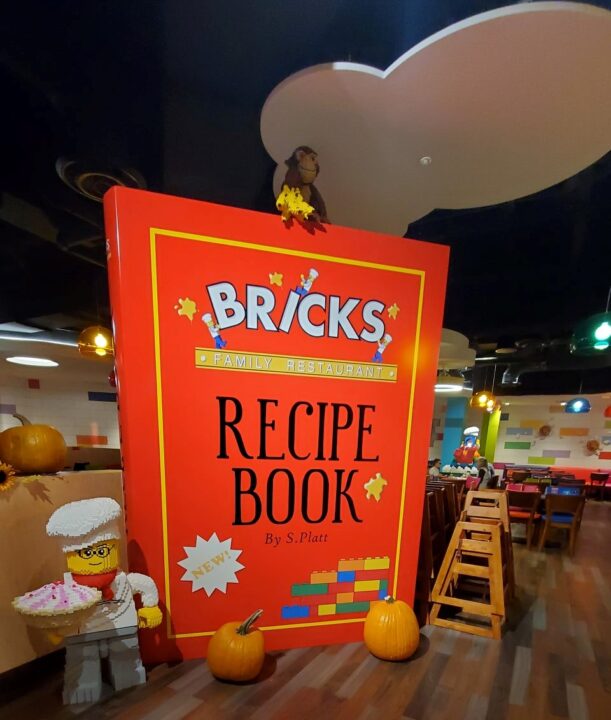 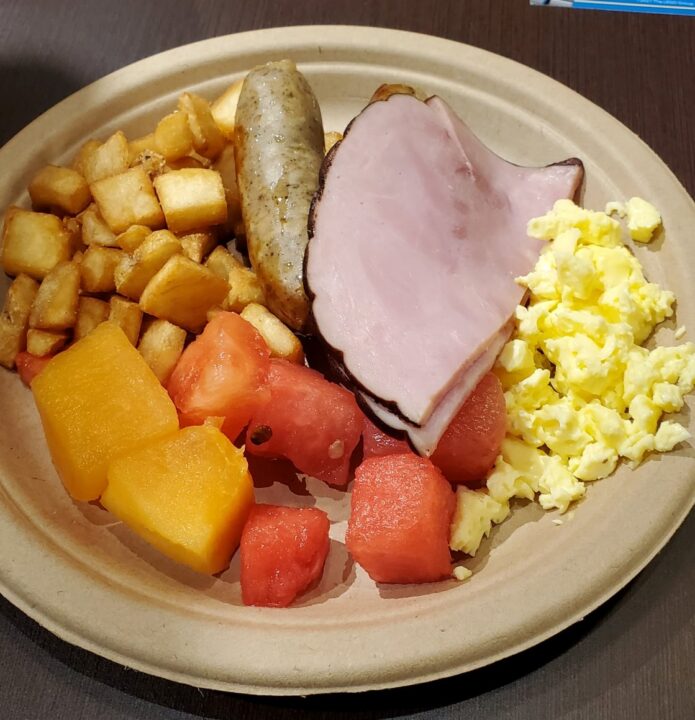 There’s a storytime every night. 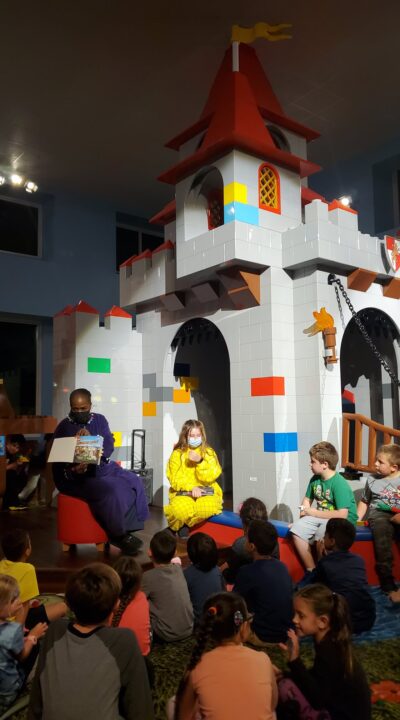 We still loved the hotel even without stepping foot in the pool area, which was closed for the season . You’d think a hotel in a northern climate like New York would’ve opted for an indoor pool, but it probably would’ve been closed due to COVID anyways. 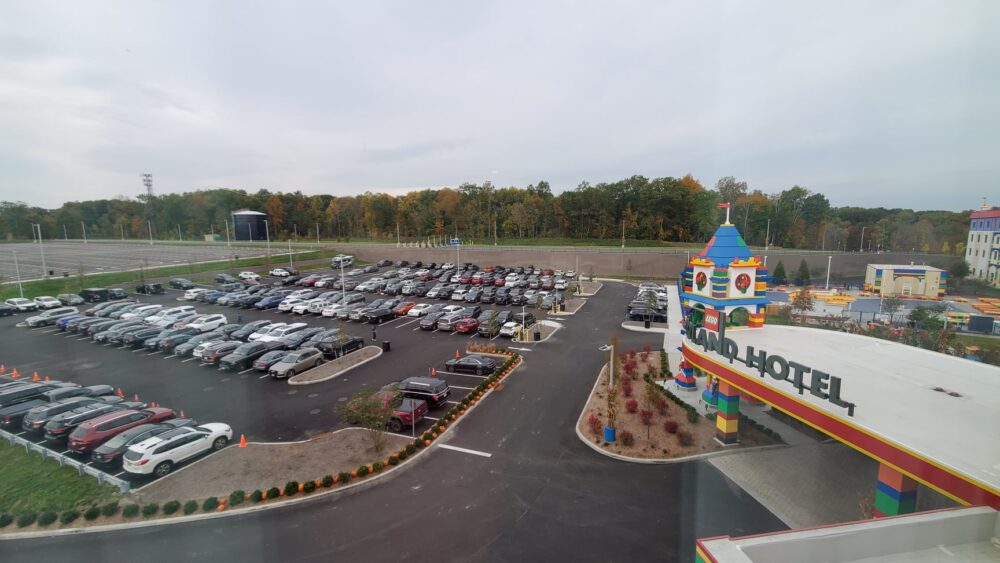 The pool area can be seen in the right side of the photo.

My Lego loving kids knew we were going on a trip but they didn’t know we were going to Legoland. Somehow we were able to pull off the surprise. Watch our kids reaction upon first seeing and exploring the hotel below:

Maybe the best part of the hotel is it’s just a short walk over to Legoland New York theme park – more on that in our next article!

You can see the entrance to the theme park with respect to the hotel.

About the only thing missing from the resort hotel experience is some kind of special perk related to Legoland itself – early entry, a special entrance straight from the back of the hotel directly into the park, exclusive ride time on an attraction (like the Lego Factory Adventure Ride) – anything like that would’ve been the cherry on top.

Overall, my family absolutely loved the Legoland New York Hotel and all it has to offer. The features of the room far surpass any Disney hotel we’ve recently stayed, and it will be the new standard by which we will judge all other hotels. We can’t wait to go back! 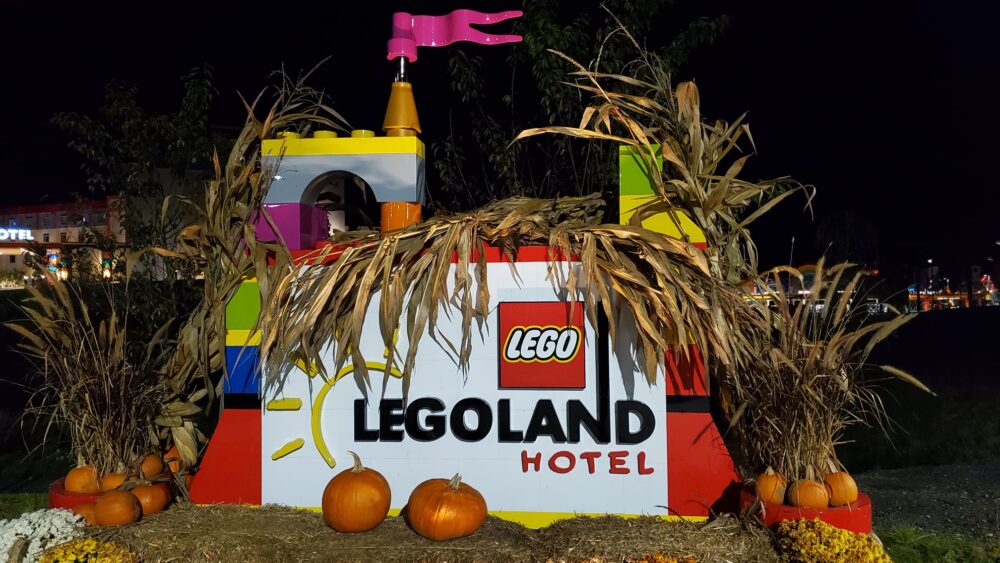 Check out our brick-by-brick ebook guide to LEGOLAND New York!

Have you ever stayed in a Legoland Hotel? Did you enjoy it as much as we did? Let us know in the comments below!