Voyage gets some off-season TLC 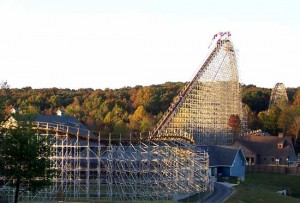 The number one wooden roller coaster in the world is getting a whole lotta love this off-season. Holiday World’s extra care and attention will be sure to keep The Voyage at the top of enthusiast’s Best Of lists. A few of the high force valleys at the beginning of the ride are being smoothed out by adjusting the ledgers that the track rests on. Over the past six seasons the wood has drifted out of place by as much as a quarter of an inch, which may not sound like a lot but you can certainly feel it as you fly by at over sixty miles per hour.

The spaghetti bowl turnaround is also getting work done.  An entire section of the track is getting replaced and re-profiled. This will add one tenth of a second of airtime bringing the Voyage’s record setting number up from 24.2 to 24.3!

Holiday World also gave an update on the Timberliner trains. More testing is scheduled to occur this spring but it sounds like the PTC trains will still be ran throughout the 2012 season making the earliest likely appearance for the new trains in 2013.

C heck out this behind-the-scenes look at some track improvements being made on The Voyage roller coaster for 2012 with president Dan Koch and Gravity Group engineer Chad Miller.