The Lego Factory Adventure Ride is the marquee attraction at the newly opened Legoland New York theme park – and for good reason. There’s no other ride remotely like it for a thousand miles. This first-of-its-kind personalized experience is the best ride at the park, but how does it measure up to other trackless dark rides around the country? Read on to find out our thoughts, complete analysis, and review of the Lego Factory Adventure ride!

Spoiler Warning: Be warned – this will be a spoiler heavy review so read no further if you don’t want to spoil any surprises the ride might offer!

After you’ve entered Legoland New York, head to the left and you’ll stroll into the land of Bricktopia where a large blue and red building sits at the end of the street beckoning you to come explore it. 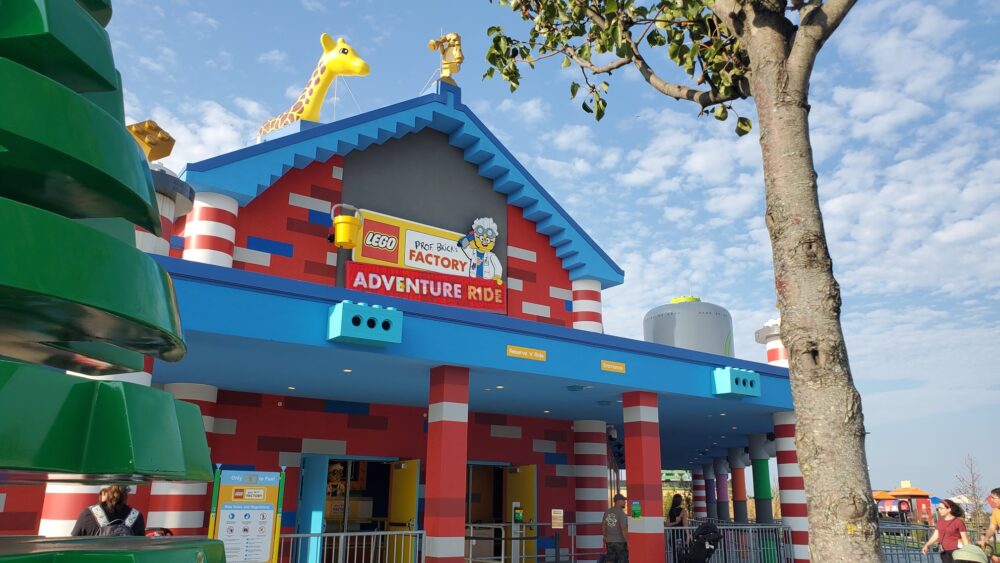 There doesn’t appear to be a minimum height or age requirement, only that guests under 52 inches tall must ride with a supervising companion. This is fantastic, especially at a park primarily aimed at two to twelve year old’s – the whole family can ride together!

The interior portion of the queue for the Lego Factory Adventure Ride begins with a life-size audio-animatronic Professor Brick mini-figure. 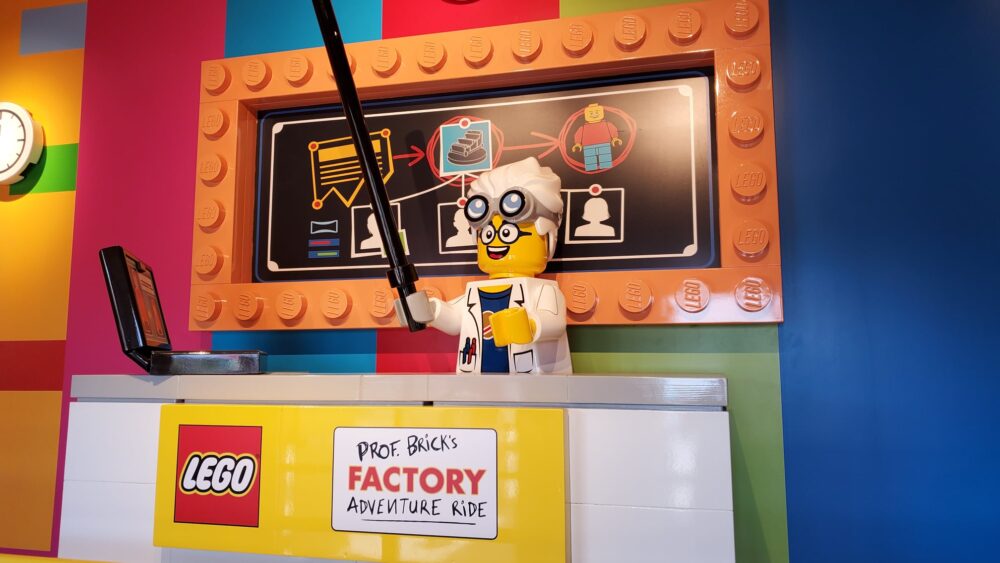 The next hallway features a timeline and history of Lego, which you can see by watching the Lego Factory Adventure queue walkthrough video below:

The next two rooms feature several Lego models in various sizes and stages of completion. The queue is stacked with numerous Easter eggs and jokes. 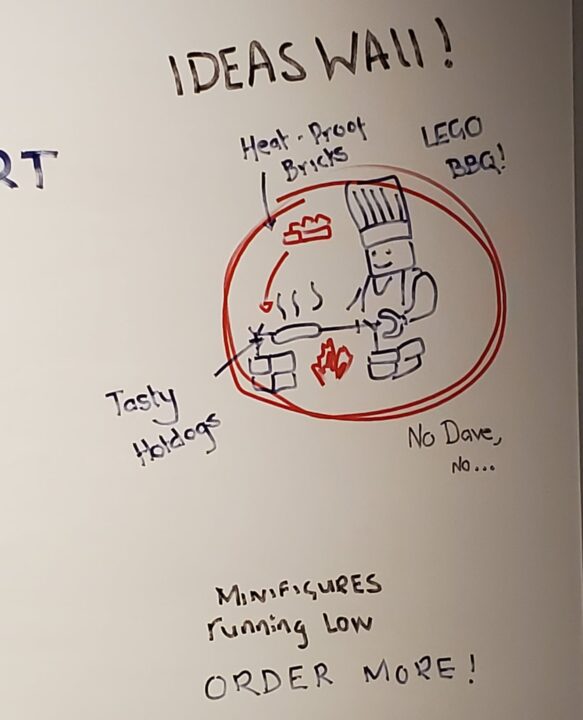 If you’ve seen any Lego movie, played a Lego videogame, or experienced any other Lego attraction, then you’re familiar with the classic Lego-style humor. 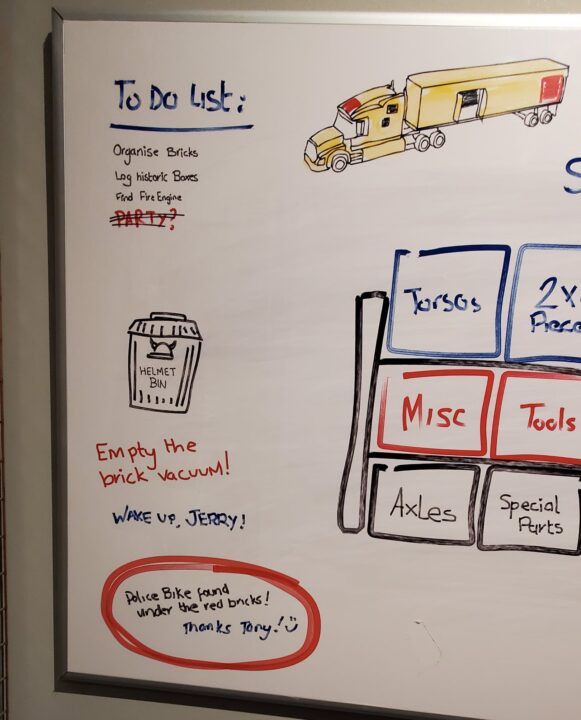 There’s also a diagram and a mini-model of the trackless ride vehicle you’re about to climb aboard. 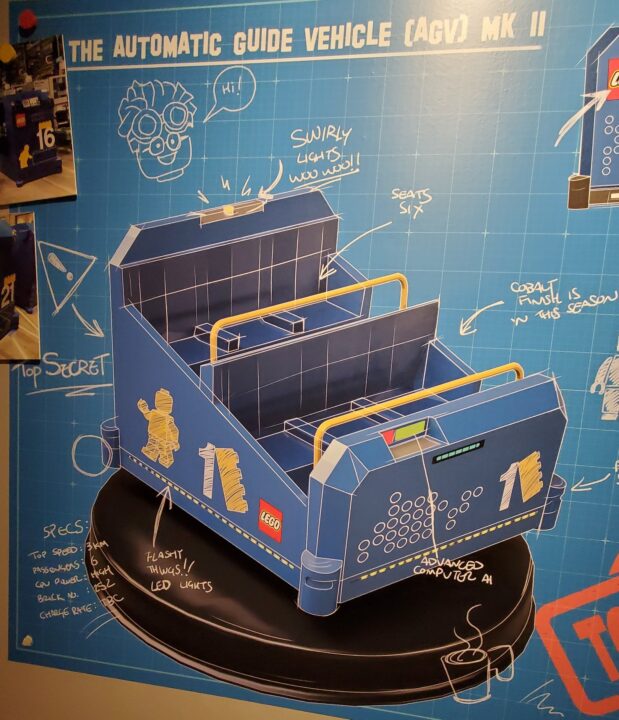 Once you’ve rounded the final corner in the queue, you come to the loading platform where three blue cars are dispatched simultaneously.  The three AGVs travel through the ride together, but each take a slightly different path and thus have different timings and viewpoints of the story elements. As you’re standing at the entrance to the station, a car is loaded to your left, middle, and right. After getting to try all three, I highly prefer the last car in the line, to your left. It gets the best view of the dragon in the first scene and is the last car to exit the final scene, making the ride time slightly longer.

The Lego Factory Adventure ride uses trackless vehicles, or automatic guided vehicles (AGVs), similar to Disney’s Rise of the Resistance, Ratatouille, and Mickey & Minnie’s Runaway Railway. However, Lego’s vehicles have a greater range of movement than those Disney rides because they contain a motion base within the vehicle itself, allowing riders to be spun 360 degrees, pitched up to eight degrees forward and backward, and rolled eight degrees side-to-side (Rise of Resistance vehicles don’t contain a motion base but they do engage with one during the ride). Each “Xperience Mover” AGV seats six riders, three in each row, and were created by ETF Ride Systems. I love these ride vehicles, they’re absolutely perfect for this attraction and I would love to see them used on other rides.

It’s truly magical when the vehicles come silently sliding into the loading platform. The tilting movements are incredibly smooth and not jarring at all. A lap bar across the entire three-person row is the only restraint and the ride does NOT use 3D glasses.

Within moments of the lap bar being secured, three garage door devices quickly raise and we’re magically off into the biggest and best room of the attraction. The room is large and made to appear even larger by the clever use of mirrors. You’re surrounded 360 degrees by highly themed physical sets. Sadly, it’s the only one of the five rooms of the attraction without a large screen. The ride starts off with a bang and the excitement and anticipation for the rest of the ride is elevated.

The first scene has a wow factor that’s mostly missing from the rest of the ride. The large size of the room and the initial unpredictability of the ride paths give riders a burst of excitement. But…when the best part of the ride is at the start, it lends the following scenes to be a bit of a letdown. The first scene is really the only one that gives you the feeling of being in a Lego factory.

For an experienced theme park fan, the excitement is short lived when in the next room you end up being parked in front of a large screen for a simulator like sequence, all too similar to countless other rides.

The next scene is what is supposed to make the Lego Factory Adventure unique and truly special. As originally described by Blooloop, it “features the world’s first use of on-ride tracking technology. This identifies the attributes of riders and maps their position in the virtual space, before transforming them into Lego Minifigures. Motion tracking also allows the minifigures to move as the guests moves…Holovis’ HoloTrac software platform uses advanced computer vision and tracking technologies, underpinned by deep neural-network-based facial detection and recognition algorithms.”

It’s a magical and amazing experience – when it works. My family of four rode three times, meaning there were twelve opportunities to turn each of us into a minifigure. It only worked four out of twelve attempts (2 adults, none of us, 2 kids). A 33% success rate is not good. The mini-figure transformation effect needs to be improved to work at least 90% of the time. When the system doesn’t turn you into a custom minifigure it is at least smart enough to substitute a generic costumed Lego person instead, and the tracking of your movements did work: when you raise your arms in the air the minifigure followed.

The fourth scene is a clever gag where, since you’re now a minifigure, you’re placed into a Lego box and shaken around before being dumped out into a child’s room. It’s also a clever way for the design team to save money as the room is devoid of any theming or sets as the cars gyrate in the pitch dark. 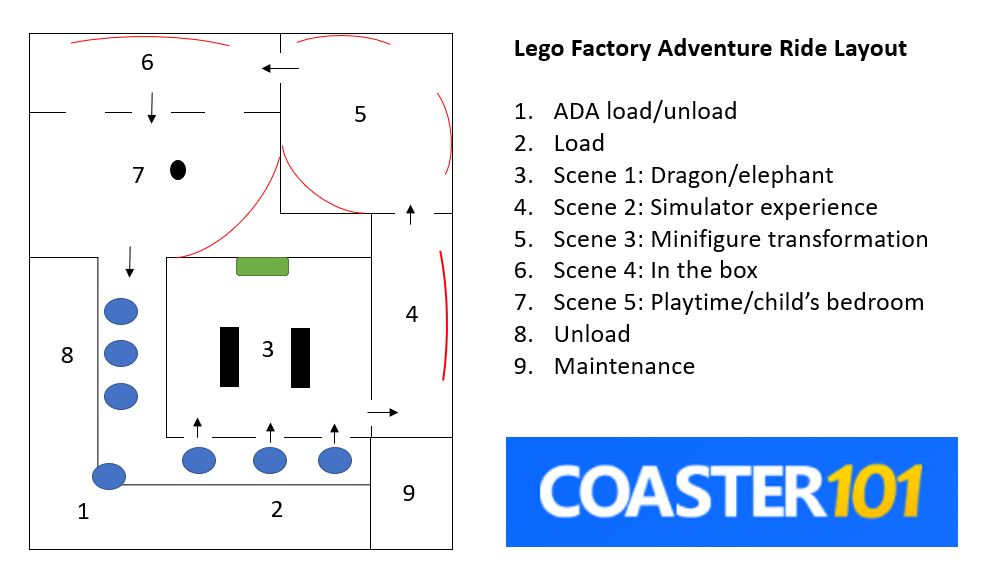 The fifth and final room has a mixture of screens and physical set pieces that remind you of Andy’s room from Toy Story. As soon as you enter the room you can see into the unloading platform so you already know this is the end of the surprisingly short ride. Not sure if that was due to budget or the amount of charge the batteries could hold before needing to be recharged. In less than four minutes, you’re walking off the ride and into a gift shop.

Just for fun, I thought I would do some “YouTube research” to compare Lego Factory to other recent trackless rides (perhaps unfairly, the budget for each ride is not known but it’s probably reasonable to guess this one cost to least amount of money). Lego Factory is by far the shortest, in terms of duration and number of rooms or scenes. Yet the vehicle has more motion built into it than any of the other trackless rides listed here.

*Note: duration is the time when the vehicle leaves the load platform and stops at an unload platform. Does not include pre-shows.

The Lego Factory Adventure Ride is easily the best attraction at Legoland New York as there is nothing else like it in the United States outside of California and Florida. It’s an impressive achievement and definitely ranks as one of the best themed dark rides outside of a Disney or Universal theme park. The motion base in the vehicle even gives it an edge over several new trackless Disney attractions.  It’s a great ride and I love the concept but I just can’t help the feeling that it could’ve been even better. The short ride length and the unreliability of the mini-figure transformation are the only thing holding this ride back from being among the best dark rides in country. If future copies of this ride are built, it’d be great to get at least one more scene added like the first one: no reliance on screens and a fully physical set. 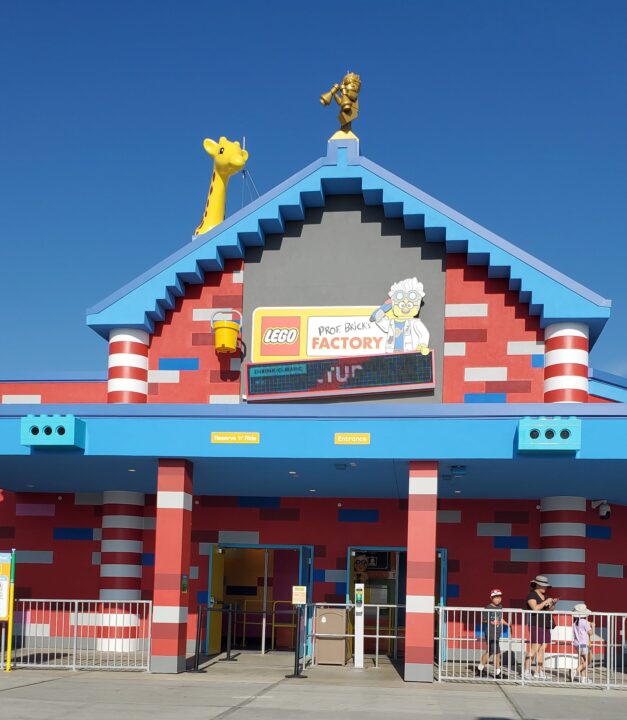 Check out our brick-by-brick ebook guide to LEGOLAND New York!

Have you gotten a chance to ride the Lego Factory Adventure ride at Legoland New York yet? What did you think? Let us know in the comments below!