Over the past month, the quest for coasters has taken me to 11 new parks across multiple states. In an effort to not get my coaster enthusiast card revoked, I finally was able to visit some non-Disney parks during my Florida swing. Busch Gardens Tampa has always been on my list, even more after spending some time at Busch Gardens Williamsburg the past few years. Their coaster collection has always fascinated me and I was excited to get there in person!

Not having been at this park before and with crowds being higher than normal across the board this year, I knew I wanted to be at the gate prior to opening. After talking with fellow Coaster101 writer Andrew and getting some tips on what to ride first, I had a plan of attack for the day.

A Quick Overview of our Visit

When the gate opened we headed right for Cheetah Hunt and got on immediately, followed by a walk on at Cobra’s Curse and Montu. If you are unfamiliar with Busch Gardens Tampa, all three of these coasters are located just inside the entrance and I was told tend to get busy later on in the day (even after our ride on Montu, Cheetah Hunt was already up to a 45 minute wait). So with 1/3 of the coasters knocked out in our first 20 minutes, I was feeling better about getting all of the rides in that day.

Next, we made the trek over to SheiKra and Tigris, hitting Air Grover on the way. Wait times were still minimal at this point, only waiting about 10 minutes for both major coasters. Now with 2/3 of the coasters ridden in an hour, I relaxed and was able to slow down and really enjoy the rest of the day. After lunch (more on that later), we waited about 30 minutes for the Stanley Fall Flume due to my new love of log flume rides.

As we made our way over to the center of the park, I noticed that Falcon’s Fury hadn’t been running but I still had hope it would be up and going in the afternoon. Our longest two waits of the day came next on the classic 1980 Scharzkopf, Scorpion and on the park’s wildmouse, Sand Serpent. As our car hit the last set of brakes on Sand Serpent, the ride stopped. After a few minutes an employee announced that someone would be around to let us out of our ride vehicles (I was pumped we were going to get a walk-off, albiet on a wild mouse, but still cool!).

While we were sitting on the brake run, Falcon’s Fury started having some movement, so we jumped in line before it got super long. We were lucky and got on before it closed yet again soon after.

If you’re keeping track, you know we only have one coaster left to hit, possibly the most iconic in the park. Growing up I remember always seeing that classic shot of Kumba’s two corkscrews and wanting to be there. The time had come! With only about a five minute wait, I made sure to snag a couple quick rides.

With a storm looming in the distance, we took a ride around the Serengeti Plain on the train. Unfortunately we had to disembark halfway through the journey because of lightning in the area, leaving us with the dilemma of waiting it out or making the mad dash for the car. The radar wasn’t looking promising, so with nine new credits to our name we started the walk back to the front. As we got to the tram stop, the skies opened and they announced that they would no longer be running the shuttle in the storm. Bummer! We finally got back to our car, soaked, but happy with the great day we had at Busch Gardens Tampa.

Cheetah Hunt, Montu, SheiKra, and Kumba were probably the most anticipated coasters of the trip for me and they did not disappoint. Cheetah Hunt is easily the most enjoyable coaster at Busch Gardens Tampa. The easy going, yet forceful nature of the ride lends itself to being very laid-back and re-ridable. The length of it seemed to be way longer than many coasters and felt more like an experience rather than just a ride, especially with the layout going way back into the park through the animal exhibits. I really wish the storm would’ve held up just long enough for one last ride on Cheetah Hunt.

I am a big B&M Invert fan, so getting on Montu with all of it’s tunnels and low-to-the-ground elements was amazing. The ride quality was there and definitely ranks up there with Banshee and Afterburn for me. It actually felt a lot like a great mix of those two coasters.

SheiKra was my third Dive Coaster and it was the best themed of the three (others being Griffon & Valravn). There seemed to be more trees and rocks in the ride’s vicinity and the dive into the volcano tunnel was awesome. We also were able to get a front row seat and that’s the only way to go on these dive machines.

As I said before, Kumba has always been on my bucket list of coasters. Even though I was really looking forward to the ride, I actually didn’t expect much from the 28 year-old B&M. I was wrong. Kumba blew me away; the forces were strong, the track was smooth, and the pacing near perfect. 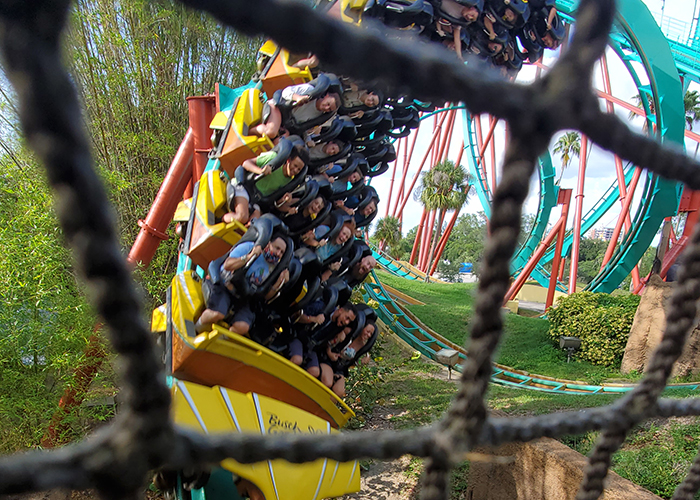 For what it is worth, here is a first-timer’s ranking of the coasters at Busch Gardens Tampa:

With food prices at parks getting out-of-control (probably in effort to promote the All-Day Dining Deal), we got the All-Day Dining Deal. It was well worth the price with the amount of food and drink you can get throughout the day. I think we ended up ordering three times the price of the pass in eats. Even when you weren’t hungry, it was nice to be able to grab a cold drink or ICEE.

The food we had at the park was great too, notably the Zambia Smokehouse located near Tigris. The restaurant serves up tasty barbecue like ribs, pulled pork, and brisket. We sampled a little bit of everything and were very impressed. As far as in-park BBQ joints go, it was up there with Carowinds’ Harmony Hall and beats out Cedar Point’s BackBeatQue. 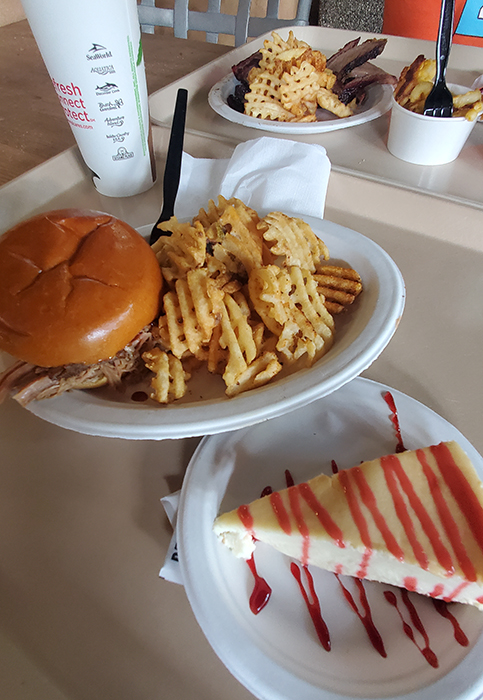 There are six restaurants at the park, four of which accept the All-Day Dining Deal, so there is quite an assortment of meals to choose from during your visit. With the deal, you can get one entree, one side/dessert, and one drink every hour. We found that an “entree” already came with a side, so you can double up your side or get dessert as well. Tip: skip the prepackaged brownies and snag a raspberry cheesecake!

Biggest Surprise of the Day

Put me on any roller coaster at anytime and I am game, but I will admit that drop towers still get me. I don’t know what it is, maybe the inability to look down at where you are going or the uncertainty of when you will drop, but they are about the only amusement ride that I still get that true scare from. So part of me was excited to try Falcon’s Fury and the other was terrified.

Falcon’s Fury isn’t your run of the mill drop ride. Once you get to the top of the 335 foot spike, your seat tilts out 90° so you are facing straight down, all of your weight on the restraints — the only thing between you and the pavement below. You may call me crazy, but it was at this point that all of my fear went away. Was it because I could see what was happening or some other psychological block? At any rate, I went with it and absolutely loved Falcon’s Fury! I wish I could’ve rode it ten more times that day, but between its many shutdowns and some brief rain delays, I only got on once more.

What Could Be Improved

One: open Iron Gwazi. From the midway, this monster of a ride sits completely still, taunting coaster enthusiasts. It looks very similar to Steel Vengeance and if it is anything like it, Busch Gardens Tampa will have a new top coaster. I really hope to make it back to the park and ride it when it opens.

Also, the park could use a few more flat rides. Other than Falcon’s Fury, there really isn’t any other options for non-coaster thrills. I’d love to see something like a Screamin’ Swing or Giant Frisbee make its way here. The only other ride I noticed myself missing was some sort of dark ride. I think Busch Gardens Tampa would be a great home for a Soarin’ type ride that featured the lands of the park or even a new dark ride shooter.

Overall, Busch Gardens Tampa met all of my expectations and then some. From the quality of the rides to the cleanliness of the park, you could tell that everything was thoughtfully maintained. Even older rides like Scorpion and Kumba were immaculately kept up. I braced myself on Scorpion for a rough ride and was pleasantly surprised by the layout.

Compared to other parks I’ve been to recently (I’m looking at you Six Flags Over Georgia), the hospitality was on another level. The clean-up staff was on top of things at all of the restaurants, the employees were all friendly and helpful, and the queues weren’t full of trash (plus you didn’t have the smell of garbage as you walked around the park).

Whatever the Busch Parks are doing, they need to keep it up. I’ve never had a bad day while visiting their parks. When you compare their ticket prices to other Orlando area parks, it will be hard to pass up another trip on the next Florida vacation.

Have you been to Busch Gardens Tampa? What was your experience like? If you could bring one new ride to the park, what would it be?