All-aboard! What’s a visit to a theme park without a ride on a classic steam locomotive? Here’s our picks for the best theme park steam trains in America. To come up with this non-scientific list, we looked at many factors like how impressive, unique, or historic the locomotive is, how long and interesting the route is, and what there is to look at along the way.

Before we get into the list, let’s review a little steam train terminology. Locomotives have different wheel configurations which are classified using the notation X-Y-Z, where X is the number of wheels on the leading truck (or bogie), Y are the number of connected drive wheels, and Z is the trailing truck. Leading wheels are used to help the locomotive negotiate curves and to support the front portion of the boiler. If a leading or trailing bogie is not present it is denoted as a 0. The drive wheels are powered by the pistons and are coupled together with side rods.

Let’s take 4-4-2 for example. If you’re looking directly at the side of the train you would see two small wheels, two large wheels connected together, and one small wheel. Make sense?

Shown below are the wheel configurations for all the engines running on the theme park railroads in this list. As you can see, 4-4-0 is the most popular type of locomotive used on amusement park trains. 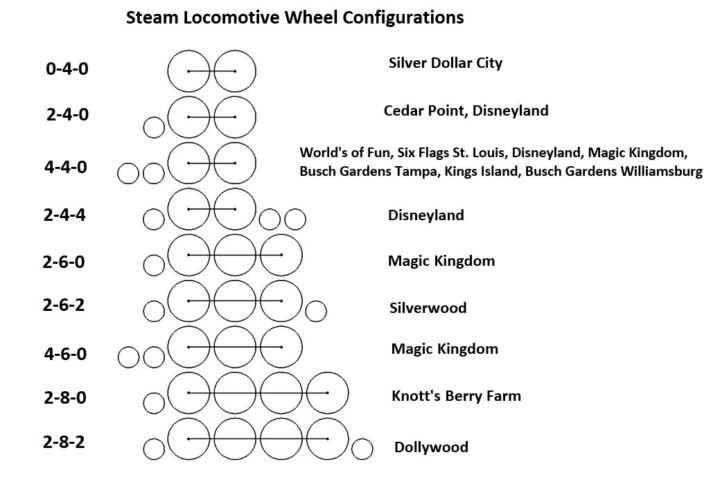 We did not take into consideration individually operated railroads with no theme parks attached or zoo trains. This list also doesn’t include small amusement parks where the primary attraction is the train ride, such as Tweetsie Railroad. To make this list, the train has to be one of many marquee attractions inside a theme or amusement park. 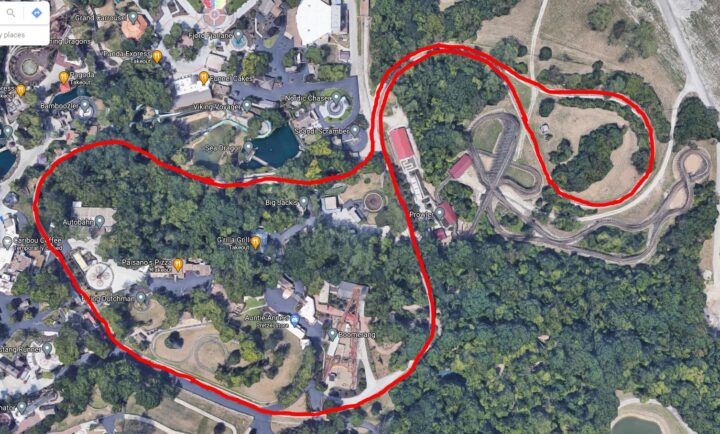 During the scenic ride around the park, passengers on Worlds of Fun Railroad are afforded views of the Prowler wooden coaster that can’t be seen from anywhere else in the park. Engine Eli has been out of commission since the end of the 2018 season for boiler work, but last we heard the park hopes to have it running again for the 2021 season. The park is also expected to introduce engine Levi in 2021 as well. After Knott’s Berry Farm’s train, Worlds of Fun Railroad has the second shortest track on our list.

Update: Worlds of Fun announced that Eli would be returning to the tracks starting on Saturday, August 6th, 2021. No word on Levi – if you have any information I’d love to hear the status. 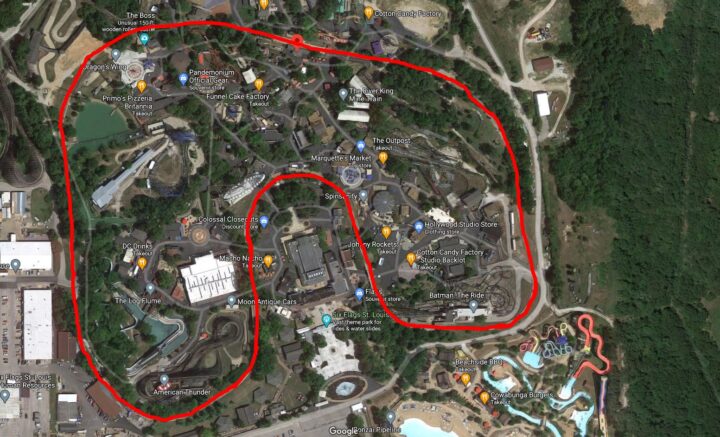 The Tommy G. Robertson Railroad at Six Flags St. Louis used to have two engines but one was sold to Busch Gardens Tampa in the 1990s. The two stations are a mere 400 feet from each other so it doesn’t really do much in terms of transportation but does offer a nice relaxing ride around the park. 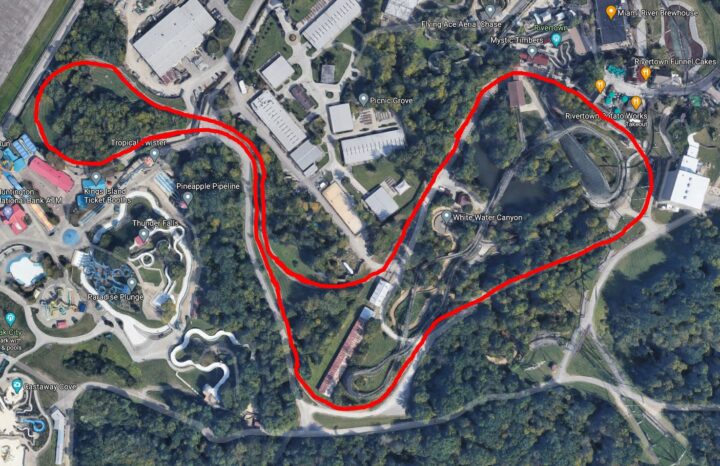 The Kings Island & Miami Valley Railroad actually serves a purpose other than just a scenic ride through wooded valleys: transportation to and from the water park. Yes, you can avoid 2,400 feet of walking by taking the train both ways. With both trains filled to capacity, 960 guests can be “on rail” at one time. The mostly wooded journey offers up close views of Diamondback and Mystic Timbers for coaster fans. 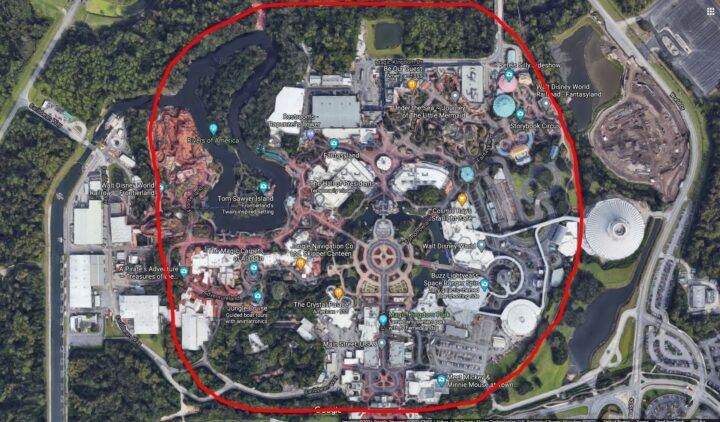 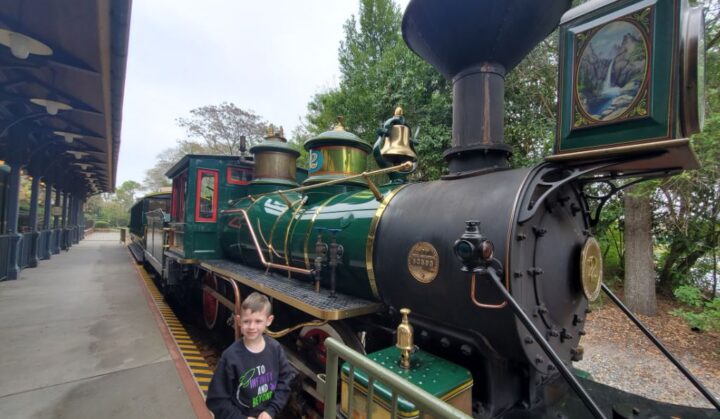 The Walt Disney World Railroad takes a grand circle tour of the Magic Kingdom, giving passengers a glimpse inside Splash Mountain and show scenes of animals and Native American villages. Each locomotive consumes 25 US gallons of fuel and 200 gallons of water per hour.

The Walt Disney World Railroad has been closed since December 2018 and is currently not operating due to construction on the new TRON roller coaster attraction, set to open in 2022. The steam engines can still be seen in static displays at each station. Check the status of the Disney World train here. 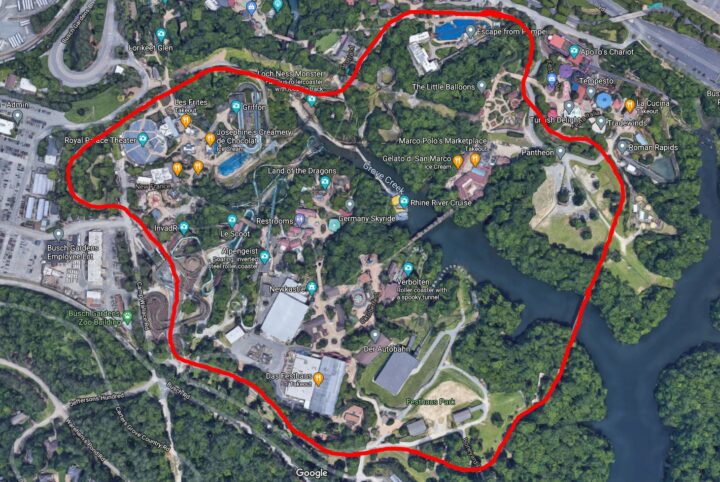 Three steam-powered locomotives whisk guests through 134 acres of lush landscaping with stops in Scotland, New France and Festa Italia for a breathtaking tour of the park. The highlight of the roughly 20 minute ride is the 400 foot trestle bridge over the Rhine River. 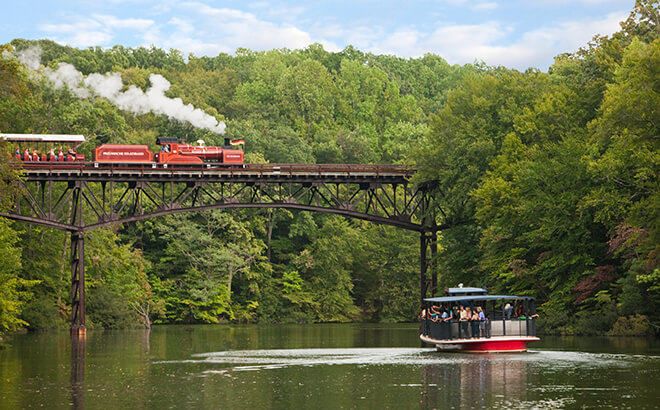 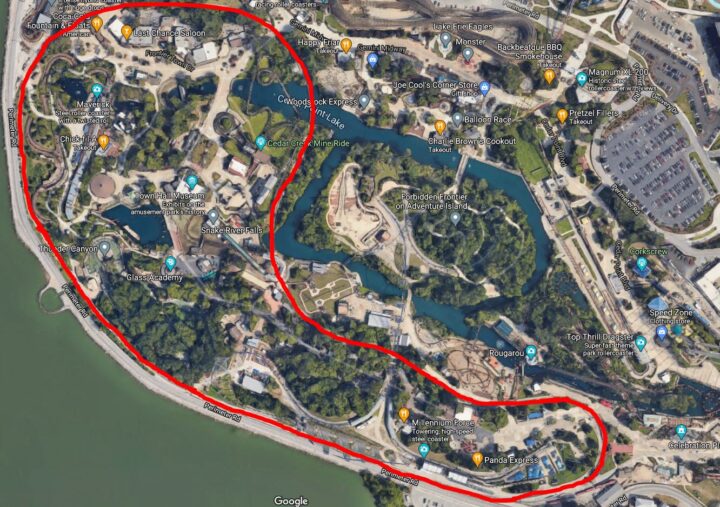 Starting at the Main Midway station, the first half of the Cedar Point and Lake Erie Railroad runs parallel to Perimeter Road, giving guests great views of Millennium Force, Thunder Canyon, Maverick, and Lake Erie. Where the train really shines is the route between Frontier Town and the Main Midway station. The train passes through a fictional, western-themed town populated by around fifty skeletons. The animated ghost town was added in late 1963 and later renamed to Boneville in the 1970s. 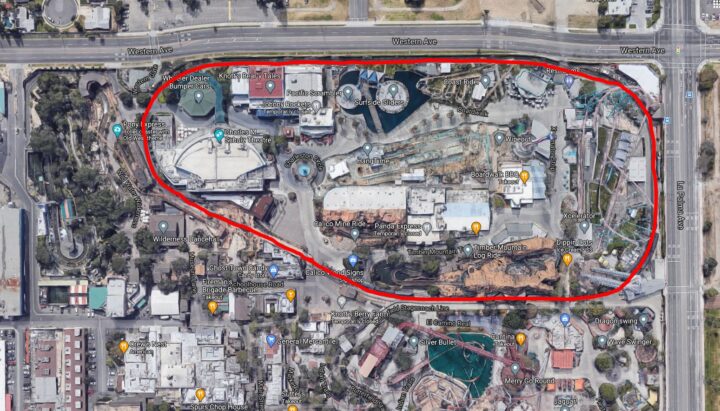 The Ghost Town and Calico Railway at Knott’s Berry Farm opened three years before nearby neighbor Disneyland and is quite possibly the most historic of all theme park trains. Ghost Town bandits still hold up every departure to this day. While Ghost Town and Calico Railway boasts the second largest locomotives on our list, the track length is by far the shortest and the layout is the most unoriginal (a plain oval), two reasons for not ranking it higher, plus it lacks the natural scenery many of the other trains have. 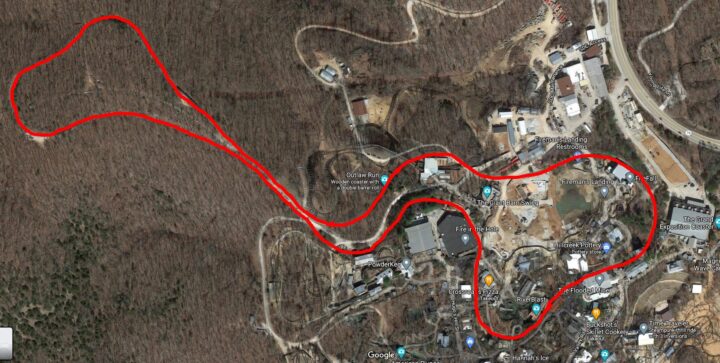 Take a leisurely and humorous 20-minute steam train ride through the beautiful Ozark countryside surrounding Silver Dollar City on the Frisco Silver Dollar Line Steam Train. The only 24 inch track gauge on our list but one of three railroads that still utilize a show element with actors. The train stops in the middle of the course for a show where “train robbers” attempt to rob the train. In 2022, the railroad will be celebrating its 60th anniversary in operation. 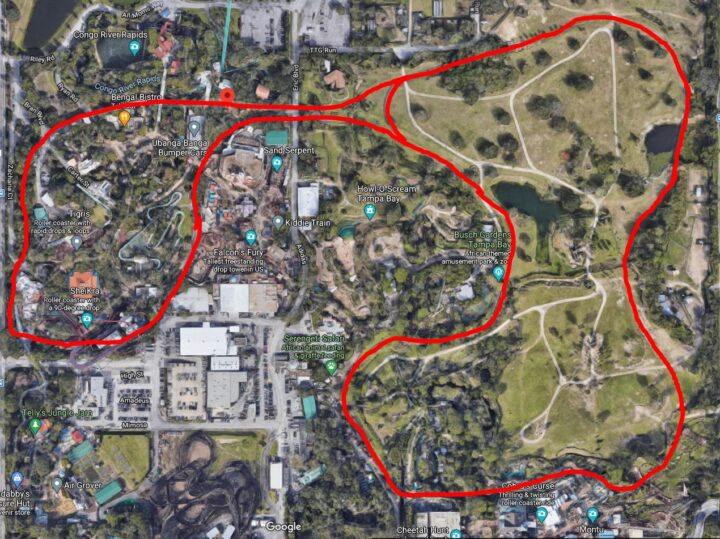 Formerly known as the Trans Veldt Railway, the Serengeti Express is the best way to take in the beauty of Busch Garden’s sprawling 335-acres. It’s the third longest train on our list in terms of track length. Thankfully, three separate stations in Congo, Nairobi and Stanleyville help you traverse this massive park. But what really sets this relaxing train ride apart is the outstanding views of the Serengeti Plains, the home of large free-roaming herds of African animals, including giraffe, zebra, antelope, rhino, ostrich and much more. No two rides are alike. Tip: sit on the left side for the best view of the Serengeti Plains animals. Coaster enthusiasts should sit on the right side to see the twisting elements of giant coasters Montu and Kumba up close.

Quite possibly the most famous railroad in the world, Disneyland’s railroad set the trend of encircling a new theme park with a train. Not only does it create a berm, or barrier, to the outside world, it’s also a handy way to navigate the park. Hop on or off at one of four convenient stations (the most stations of any railroad on our list): Main Street, U.S.A., New Orleans Square, Mickey’s Toontown, and Tomorrowland. Trains arrive every five to ten minutes at most times throughout the day and travel clockwise in a grand circle tour around the park. 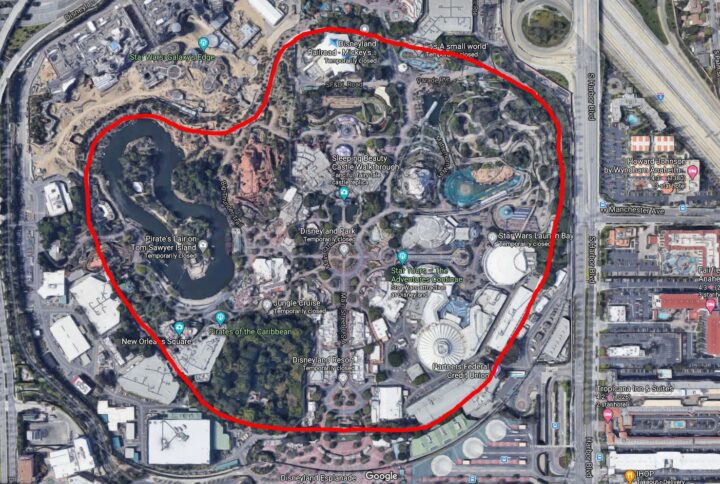 You’ll steam along the banks of the Rivers of America and see rock formations, wildlife and picturesque waterfalls. Between the Tomorrowland and Main Street, U.S.A. stations the train travels through Walt Disney’s legendary dioramas of the Grand Canyon and Primeval World – Land of the Dinosaurs. While passengers in most trains sit facing the direction of travel, Disneyland’s train has you sitting perpendicular to the rails so you’re facing towards the center of the park at all times, traveling sideways down the tracks. The layout of the second oldest theme park train on our list has been modified several times over the years, most recently for the addition of Star Wars: Galaxy’s Edge. 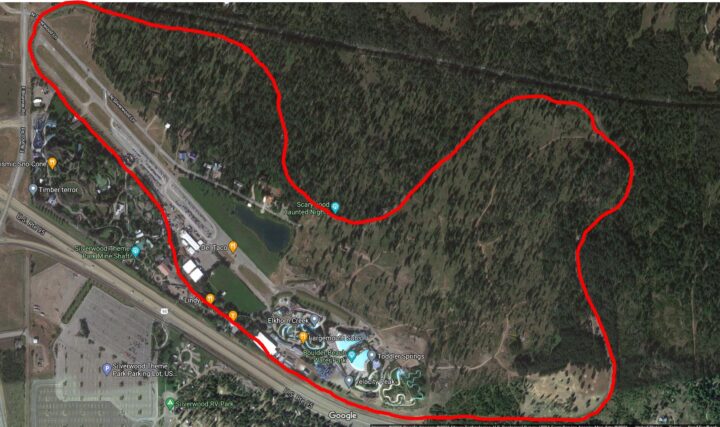 Silverwood’s train is surprisingly like a “greatest hits” of all the other great trains on our list: scenic ride through forests with mountain views, corny jokes, roaming animals (bison herd), static Western town scenes, and a “train robbery” half way through. Of the three trains on our list that still involve actors, Silverwood’s is the most entertaining and choreographed show. The robbers actually will take your money – to donate to charity. There’s a narration by an onboard actor throughout the more than 3 mile long journey, by far the longest train on our list, more than double the length of all but two other theme park railroads. The #7 engine has a unique 2-6-2 wheel configuration and while it was built in 1915, the railroad as a whole is the youngest on our list, opening in 1988. While not as well known, it’s a good long ride that offers a little bit of everything you might want from a train ride. 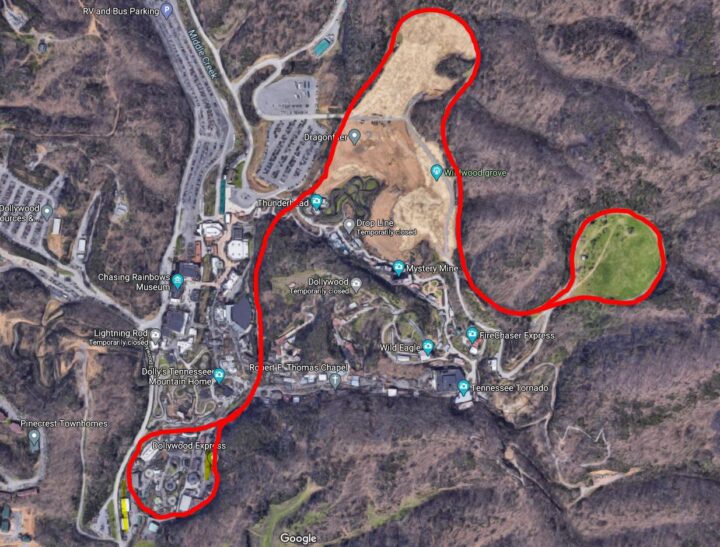 The top of our list of best theme park steam trains in America is none other than the famous Dollywood Express. It’s the biggest, loudest, and dirtiest of the bunch. When you see the black smoke start belching out of the smokestack, you’ll know you’re on an authentic, old fashioned steam train. It burns real coal so yes, you can get real cinders in your eyes. The track right out of the station is at a five degree uphill grade and at one point in the journey reaches a six degree incline. One could say the Dollywood Express is the hardest working train in the theme park industry today, safely pulling cinnamon bread stuffed guests up and down the mountain everyday. 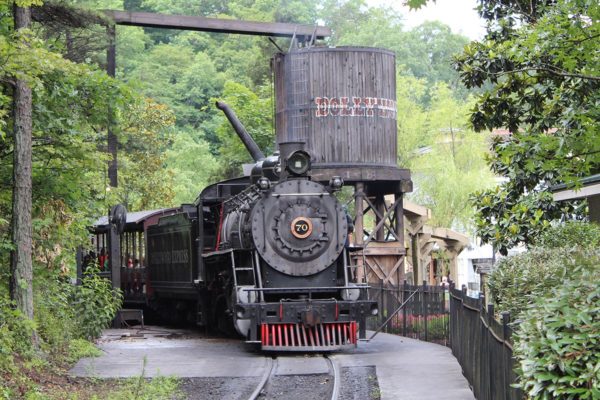 In order to pull the seven passenger cars, Dollywood boasts the two biggest engines of any theme park train, with impressive twelve wheel 2-8-2 configurations. When the whistle blows, it’s so loud it’s almost offensive, and can be heard from outside the park. The total distance traversed on the out-and-back layout makes it the second longest train on our list. The long ride gives you additional time to soak in the majestic views of the Smoky Mountains.

In Fall of 2020 guest were required to get a return time ticket due to the reduced capacity for COVID-19 prevention procedures. 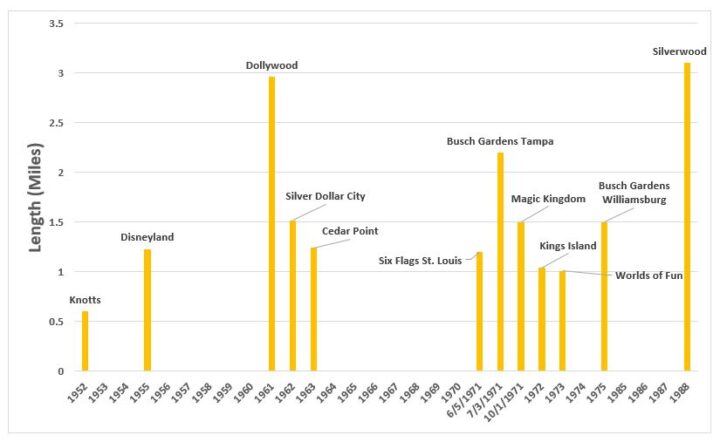 Steam trains at the following parks were considered but just missed being added to our list of best theme park steam trains for one reason or another:

Author’s Note 8/6/21: OK, so after more consideration and getting feedback from readers, I think if I were to write this article again I’d make it the top 15 steam trains and I would include Six Flags Over Texas, Little Amerricka, and Tweetsie Railroad. You can see my amended list in the video below.

I hope you enjoyed reading about the best theme park steam trains in the United States. We’re lucky so many steam trains still exist for us to enjoy today. Which one is your favorite? If we forgot your favorite train, let us know in the comments below and why it should be on this list!