Coasters-101: How the Hogwarts Express Works

After months of anticipation The Wizarding World of Harry Potter: Diagon Alley at Universal Studios Florida has finally set an official opening date of July 8th.

One of the highlights of the immersive new expansion is the ability to ride the Hogwarts Express train from Diagon Alley in Universal Studios to the village of Hogsmeade in Islands of Adventure. Universal advertises it as the world’s first ride that connects two separate theme parks (and you’ll need a two park admission to ride it).

This isn’t your typical amusement park train ride – far from it actually. Instead of sitting in long rows of benches, passengers aboard the Hogwarts Express ride in individual cabin compartments that seat up to eight guests just like Harry and his friends rode in the movies.

You’ll enjoy scenic views of the British countryside from the train window before arriving at your destination. At least that’s what Universal wants you Muggles to believe.

Do not read if you don’t want to spoil the magic. I don’t have any insider information; these are facts or assumptions I’ve made based on my own knowledge, research, and background as an engineer.

How the Hogwarts Express Works

Ironically, the Hogwarts Express isn’t really a train at all. In fact, it can be classified as a funicular, a type of cable car railway system. Two five-car trains occupy a single track that runs through the backstage area of  the Universal Orlando Resort – but guests will never know because there are no windows in the cars. Both trains face the same direction and will not turn around.  The “train” is connected to a cable that pulls the engine and passenger cars down the specially designed track.

The above diagram from Wikipedia shows how a funicular works. Both trains are connected to the same cable loop. They’ll leave the stations at the same time and pass each other in the exact middle of the journey without the passengers ever knowing.

In the aerial image below you can see the middle point where the two trains pass each other while traveling over access roads and next to giant warehouses. 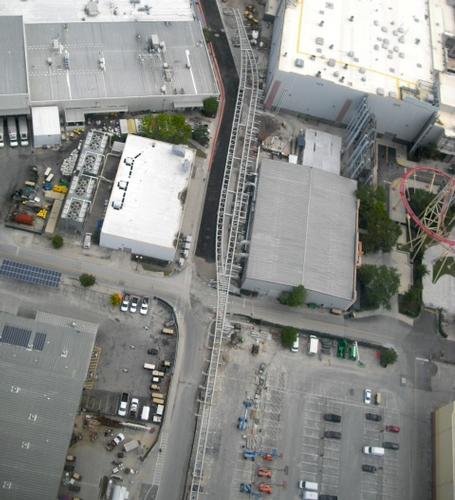 The vehicles are engine-less so the off-board drive motor is probably located at one of the stations. It’s more efficient to have a centrally located power system than separate engines aboard each train vehicle – no coal needed! I’m guessing there is also a separate rescue drive (maybe comprising a diesel engine and hydraulic motors) in case of power supply failure to the main drive unit.

Also, in case of an emergency, a catwalk runs the length of the track on the entry/exit side of the trains. PixelsAtTheParks captured some excellent aerial pictures of the Hogwarts Express that reveal a few of its secrets. The haul ropes can clearly be seen coming out of King’s Cross Station: 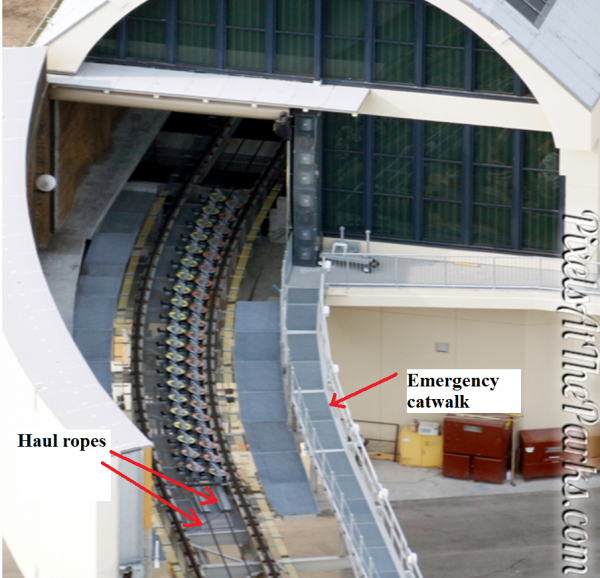 Guests will enter and exit the vehicles from only side. Because the back side of the train is never seen there are no fake wheels on that side like there are on the front. Yes, the big wheels you see are  just for show, along with all the billowing white steam, train whistles, and moving pistons. Also notice the lack of railroad ties that maintain the rail pitch on a standard railroad track. 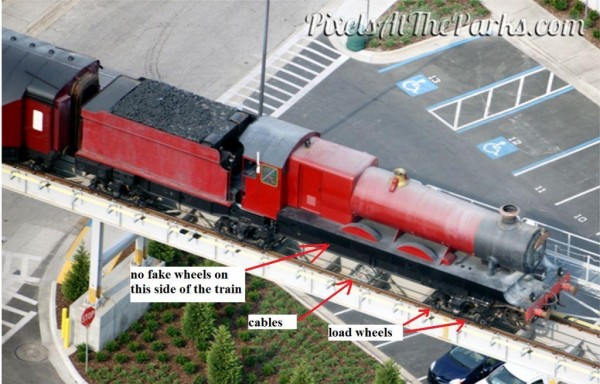 Hidden from view are two wheel carriers with four smaller wheels that carry the load of each individual vehicle. Additional damping is fitted on the suspensions to minimize rolling noise produced by the wheels on the tracks. This improves the ride quality for guests.

The Hogwarts Express cable system is probably designed by Dopplemayr. They recently supplied Ocean Park with the Ocean Express, another funicular transport system with special effects instead of glass windows. 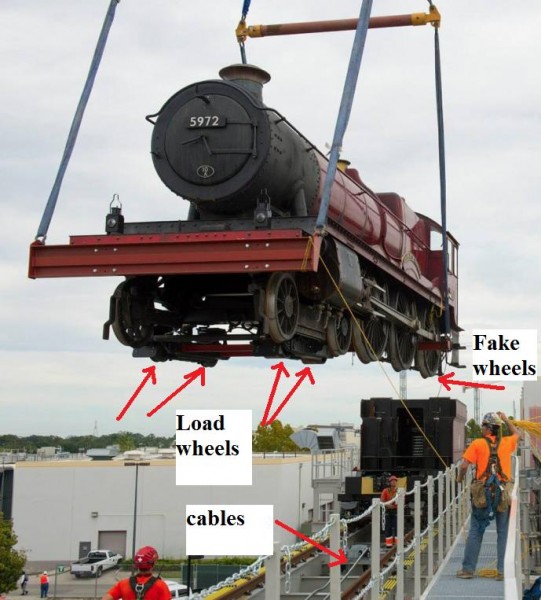 The bus bar attached to the track supplies electric power to the vehicles to energize all the on-board equipment such as air conditioning units, lighting, batteries, chargers, screens,and other special effects. If there are on-board computers to control the show elements they are probably located in the coal car, which seemingly serves no other non-visual purpose.

There are effects on-board the passenger cars that make the ride feel like a regular old, bumpy steam train. The “window” screens aren’t 3D but due to their unique curved edge design the countryside passing by does appear to have a real depth to it.

The frosted glass screens on the backside of the doors into the cabin compartment also look to be very impressive, especially when some of the characters “touch” the glass, as you can see in this video (also notice there’s no engineers driving the train):

So there you have it – the Hogwarts Express is not a real steam train but is actually a funicular railway transport system that uses cables to pull the trains from one station to another. 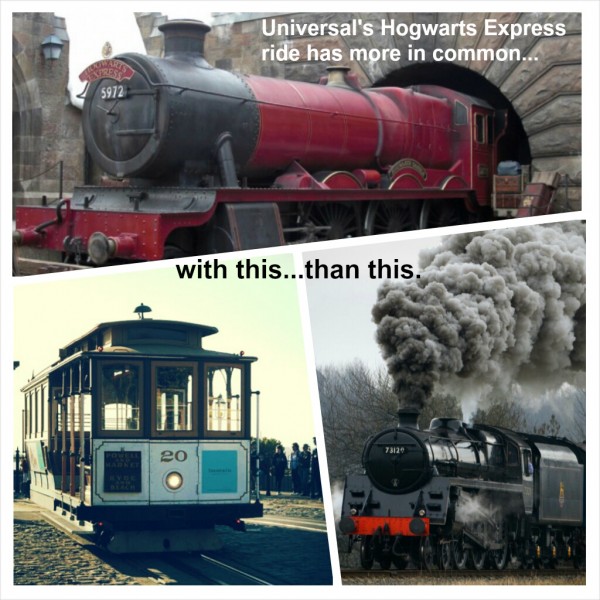 Although finding out how the Hogwarts Express works may be disappointing to some die hard fans, the ride experience still looks to be totally immersive and memorable while just the sight of the extremely detailed engine steaming into the station will bring tears of joy to more than a few eyes.

Learn about the tech behind Harry Potter and the Escape from Gringotts.

Are you looking forward to riding the Hogwarts Express to Hogsmeade or London?