A Whirlwind 40 Years of Carolina Cyclone at Carowinds

According to meteorological data, since 1980, there have been more than 100 tropical or subtropical cyclones that have affected residents of North and South Carolina. But in these past forty years, there has only been one Cyclone that the people of the Carolinas have loved and enjoyed–the Carolina Cyclone at Carowinds.

Celebrating its 40th Anniversary in 2020, Carolina Cyclone was designed by legendary roller coaster designer Ron Toomer. The coaster opened on Saturday, March 22, 1980, the first day of Carowinds’ eighth operating season. But like all good stories, the story of Carolina Cyclone actually begins well before the first riders took their rides.

Originally open in 1973, Carowinds was one of only a few parks in the United States to operate five (including two tracks on Thunder Road) roller coasters in the late 1970s. Despite a roller coaster lineup consisting of the original park attraction Carolina Goldrusher, the family-friendly Scooby-Doo (now Woodstock Express), the racing thrills of Thunder Road and White Lightning, a unique “shuttle loop” coaster, then-general manager T. Lewis “Lew” Hooper felt that Carowinds needed a “shot in the arm.”

“Lew understood that in the theme park business you’ve got to try to be on the cutting edge,” said Jerry Helms, Carowinds’ longtime Vice President of Operations. “The other thing that he understood was that you had to have anchors to make people move around the park. Everyone was going to the back of the park for White Lightning, or were all running in to ride Thunder Road and Scooby Doo. The Goldrusher had been there for a while, and people would eventually meander to it – it wasn’t the draw it was when the park opened.

“Lew said we needed a new anchor, something with pizzazz to get people to that area of the park, and that became the Cyclone – the double loop, double corkscrew dynamo that was put into the Frontier Outpost section of the park. That was Lew’s plan. He saw the big picture and he understood crowd flow and he understood the importance of not just getting another something, try to get something that had drawing power.” 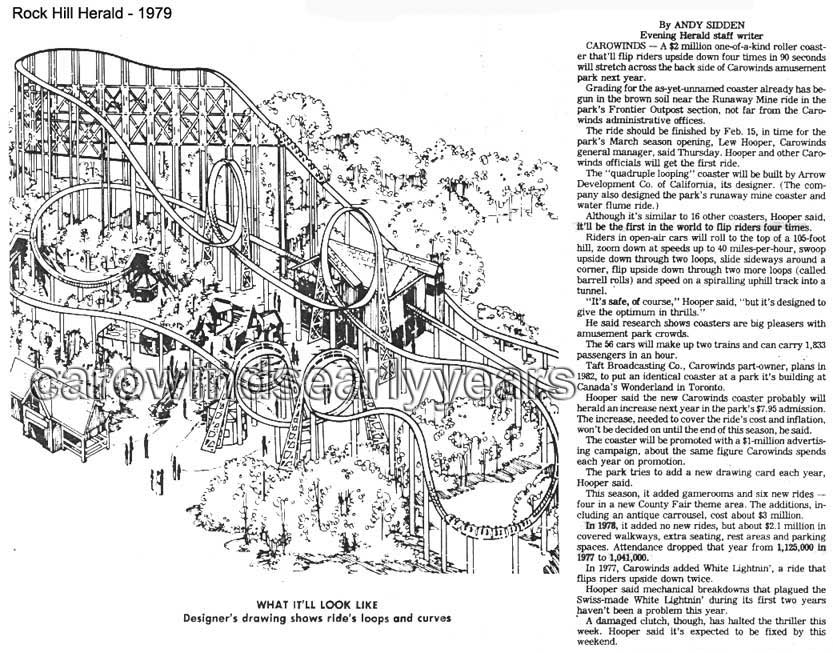 Announcement of an Unnamed Roller Coaster at Carowinds from the Rock Hill Herald. Photo: CarowindsEarlyYears.com

The coaster was announced in 1979 and didn’t have a name at the time of its announcement. It would become the third attraction at the park to be manufactured by Arrow Dynamics, following the Carolina Goldrusher and another original park attraction, the Powder Keg Log Flume.

“Riders in open air cars will roll to the top of a 105-foot hill, zoom down at speeds up to 40 miles-per-hour, swoop upside down through two loops, slide sideways around a corner, flip upside down two more loops (called barrel rolls) and speed on a spiraling uphill track into a tunnel,” wrote Andy Sidden of the Rock Hill Herald on the coaster’s announcement. 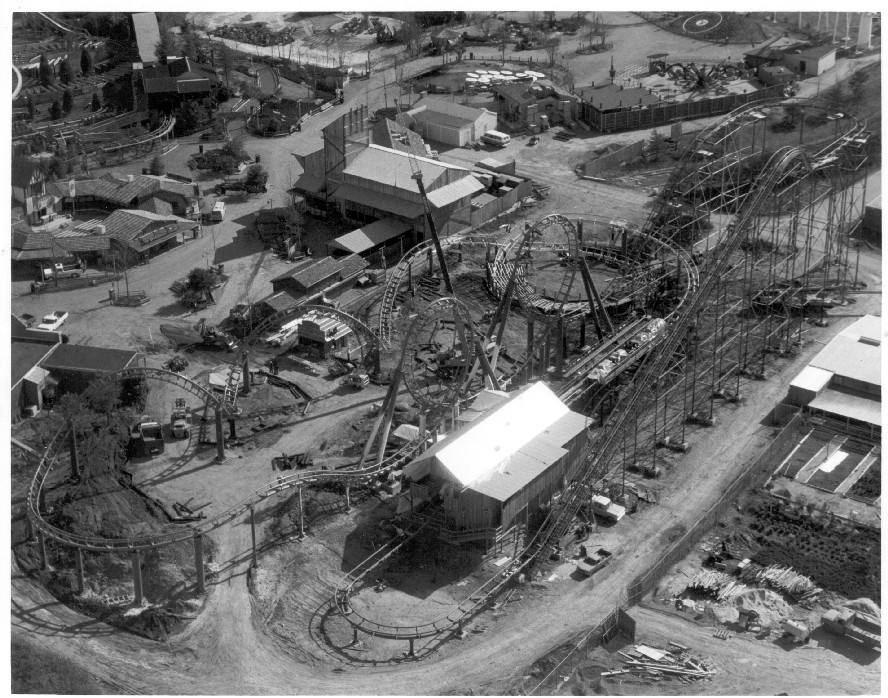 As for the name, Helms noted that Carolina Cyclone was the result of a collaborative effort between Hooper and the Carowinds marketing team.

“If I recall correctly, it was called the Cyclone because of all of the inversions and spinning, and someone on the marketing team said ‘that’s like a big storm,”’ he said. “With the loops and corkscrews, they’re going to feel like they’re in a storm. It made perfect sense, and I never really questioned it. I thought ‘that’s a great name, because that’s what it does.’ When I rode it the first time, I said ‘Yep, that’s why they named it the way they did.” 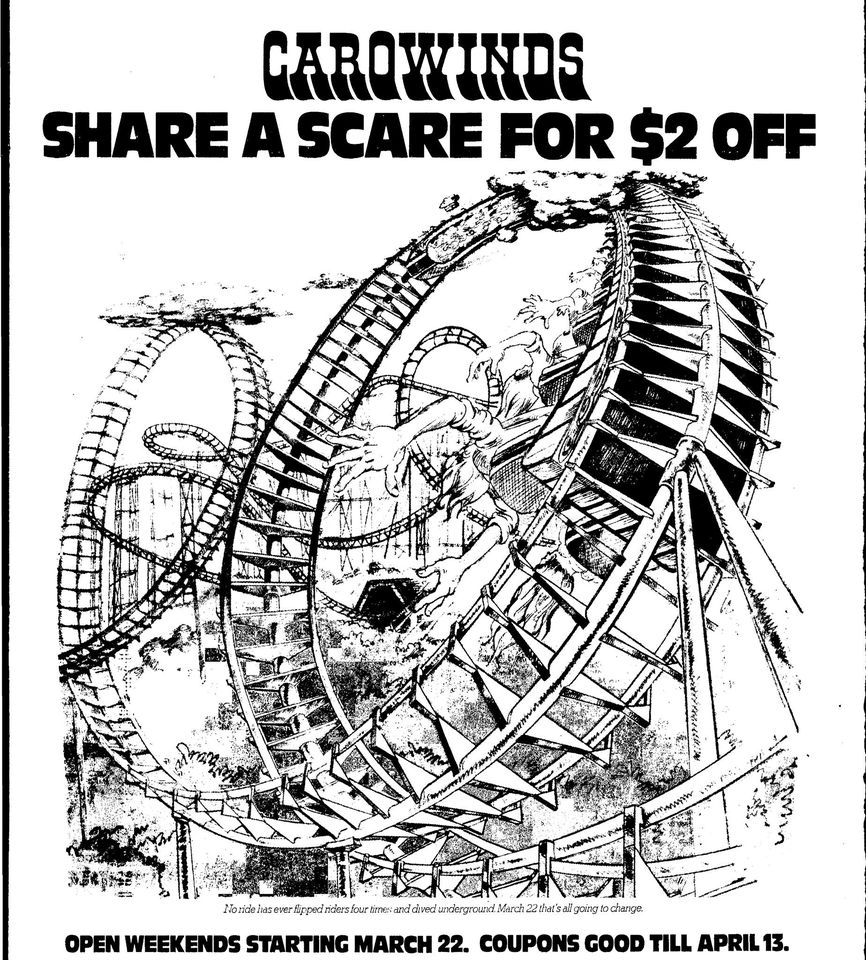 An ad in the Charlotte Observer for Carowinds from March 1980. Daily Admission was $8.95!

“No ride has ever flipped riders four times and dived underground,” an ad in the Charlotte Observer stated. “March 22, that’s all going to change.” 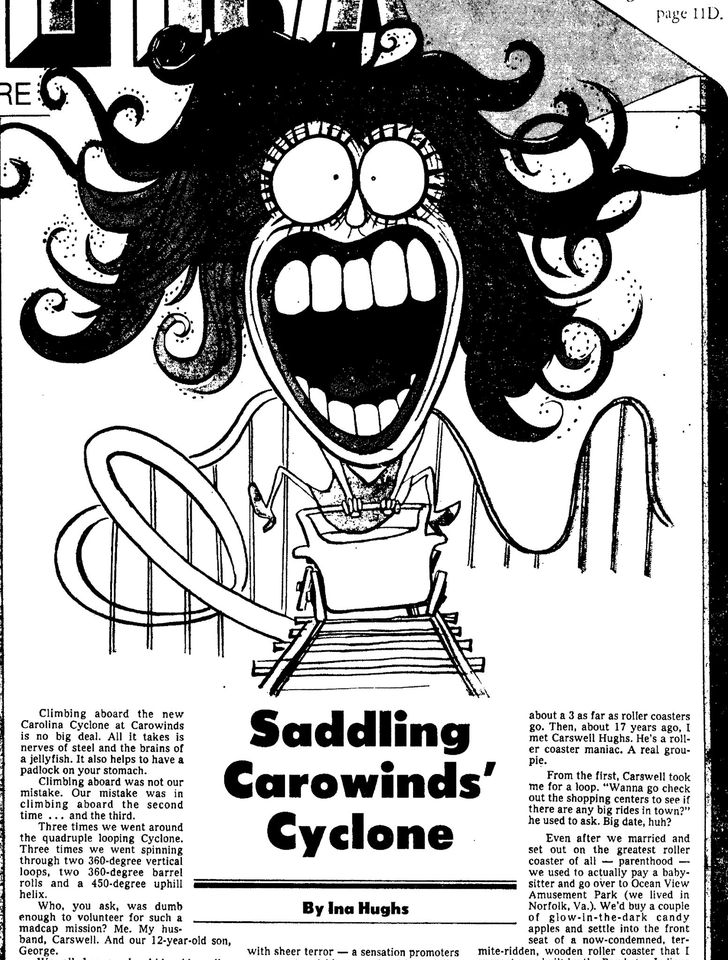 Ina Hughs Column in the Charlotte Observer from March 21, 1980

“Climbing aboard the new Carolina Cyclone at Carowinds is no big deal, all it takes is nerves of steel and the brains of a jellyfish. It also helps to have a padlock on your stomach.” columnist Ina Hughes wrote in the Charlotte Observer prior to the ride’s opening day. “It won’t toss any babies into the sea. Nevertheless, you’d better glue in your uppers, forget about your hairdo and sit on any loose change in your pocket. It’s not exactly a tempest in a teacup, this howling steel-girdered blizzard which took four months to build and adds a new twist to the thunder and lightnin’ at Carowinds.”

Helms still remembers his first ride on the Carolina Cyclone.

“The thing I remember most was thinking ‘Is this ever going to end?’” he recalled. “We went through the first loop and then I thought ‘okay, now we’re in second.’ and then I remember in the first corkscrew I kept saying, ‘Man, this ever going to end?’ It felt a lot longer than it actually was. I kept thinking, ‘This is pretty good fun. If I’m still liking this after a few rides, everybody else is going to love it. We have a hit on our hands.’

“There are moments like this in life that you never forget. I was like Elvis Presley; all shook up!” Helms said, with a laugh. 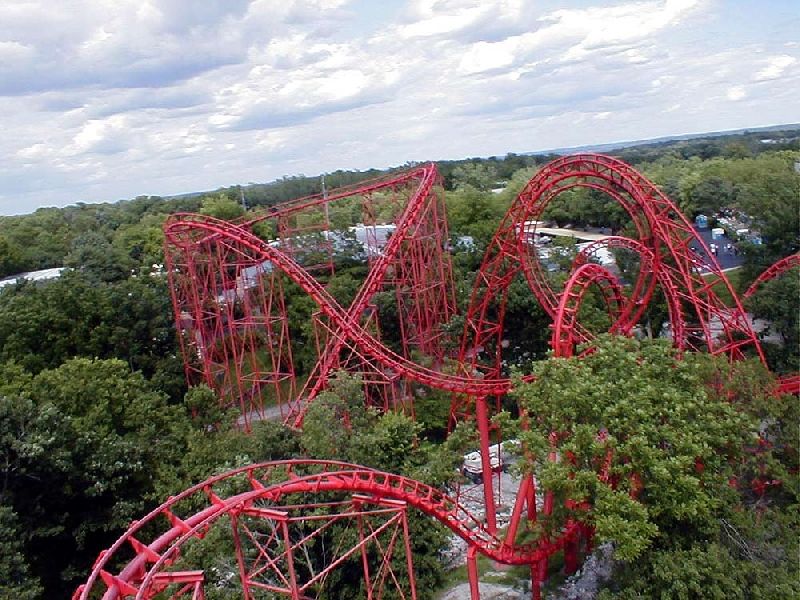 If you didn’t know prior to reading this article, you now know that Carolina Cyclone was the first roller coaster with four inversions. But did you know it only held the distinction as the only coaster with four inversions for less than two weeks? Kansas City’s Worlds of Fun opened Orient Express, another Arrow Coaster that featured four inversions of its own on April 4, 1980. Despite the fact that Carolina Cyclone has outlasted its four-inversion counterpart, Helms felt that the distinction of “the first” coaster to hold this record is still important to this day.

“Worlds of Fun could have opened three days later and we would have still been the first. Our marketing campaign was that we would have the first coaster with four inversions, and we did!” He said. “In marketing, it’s all about what you are. Being the first is something that gets people’s attention. If someone else comes out and says, ‘Yeah, we’re going to be the second,’ it doesn’t mean as much. People know the Carolina Cyclone as the ‘first-ever’ four inversion roller coaster, and even though there are ‘bigger and badder’ coasters out there, they’ll remember their experience on a coaster that was the ‘first-ever.’”

Taft Broadcasting, who was a co-owner of Carowinds in 1980, originally had plans to open an identical coaster to Carolina Cyclone at Canada’s Wonderland, another park that they co-owned. The coasters did not end up being truly identical, although Dragon Fyre, which opened in 1981, also features a series of back-to-back loops and back-to-back corkscrews. 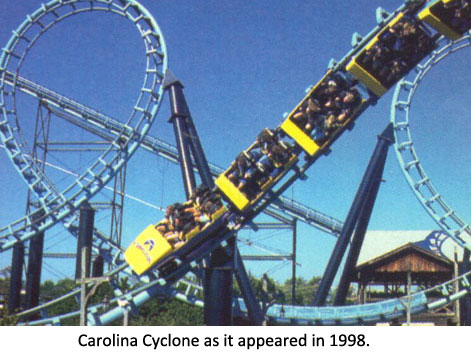 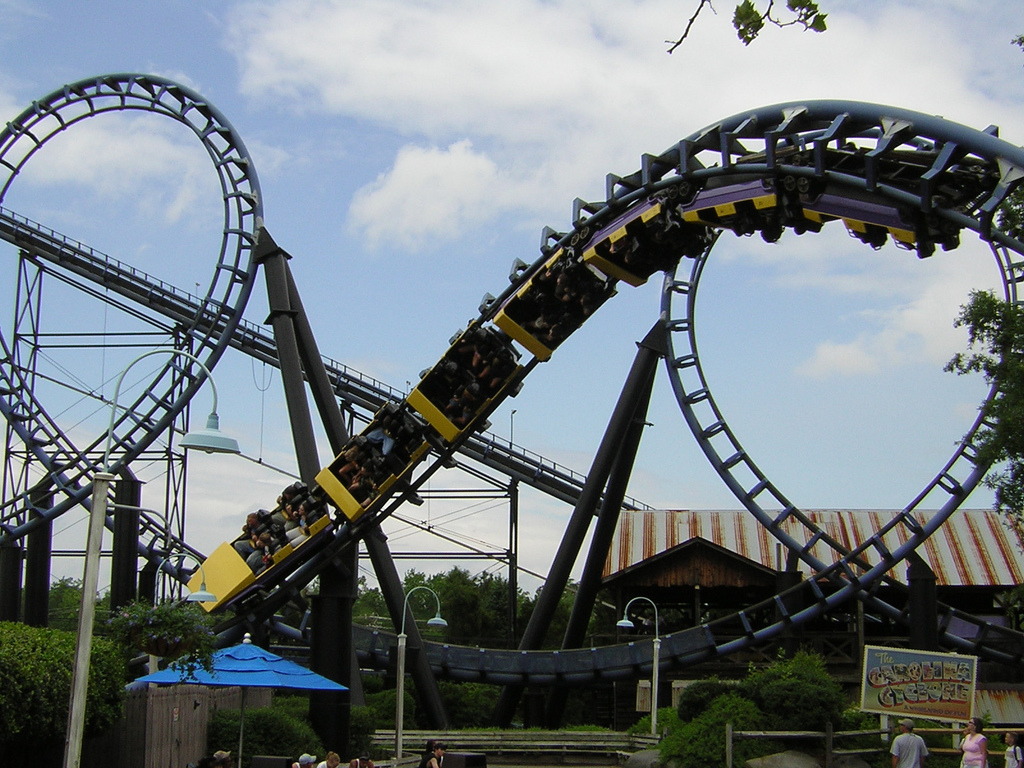 Over the years, the “first-ever” four inversion coaster has seen a variety of paint jobs, from a fiery red with black supports in its early years, to a bright teal with navy supports, to a dark blue and dark grey combination, until ultimately the park landed on the multi-colored yellow, orange and blue color scheme that we know today.

As for its lasting impression on Carowinds, Helms noted that the addition of Carolina Cyclone was truly a transition point for the park into more of a well-rounded amusement park.

“Carolina Cyclone gave us a balance in our roller coaster line-up, and it gave us more things to talk about,” Helms said. “It’s beyond just adding the first multi-inversion coaster at Carowinds, it was now more about the variety of the rides that we had at the park at the time. It created something of interest all around the park. We suddenly were a park that had some hardware that people would travel to.”

“Families would come in and would bring their friends from around the country because now they had a reason to bring them to the park–there was something worthwhile. It made a huge difference and we’re thrilled it’s still operating today.”

Nearly 3.7 million guests have ridden Carolina Cyclone over the years, and while this year, the coaster won’t be surpassing the more than 450,000 rides it gave during the 2019 season, the coaster’s legacy will continue to live on in 2021. 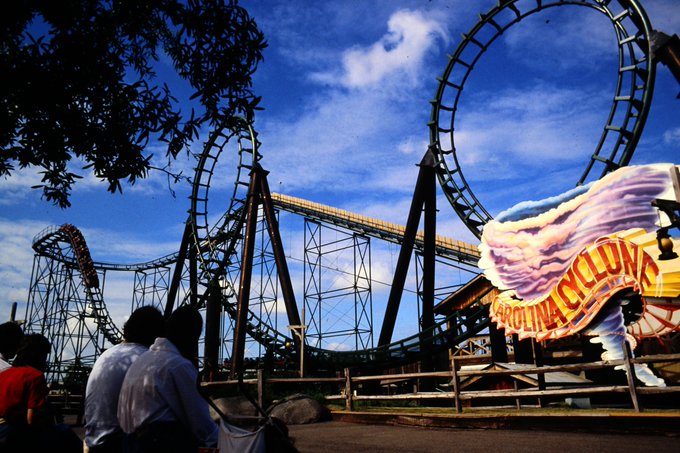 But that’s another story for another blog…Stay Tuned!

If you liked this, you’ll probably love 40 Facts to Celebrate Carolina Cyclone’s 40th Birthday from March!