How to Avoid the Slowest Line at a Theme Park 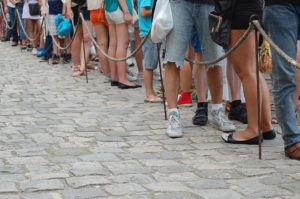 Like clockwork, you’ve once again chosen the slowest line of cars to pay for parking, the slowest line to order food, the slowest line inside the station of your favorite roller coaster — the list goes on and on. What at first seemed to be the shortest line is now the longest. And the people in the lines on either side of you seem to pass by at a blistering-fast speed.

Add the frustration of being late for a Fast Pass reservation or missing the start of a show, and you’ve got yourself in a foul mood.

“If I had only gotten in any other line,” you think to yourself. 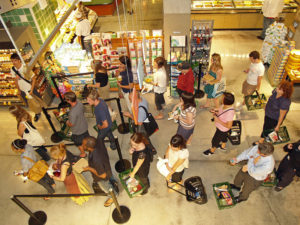 Theme parks aren’t the only place where you can get stuck in a slow-moving line.

But you’re committed. If you switch now, you’ll have to start all over at the back of a new line. It’s too big of a gamble. Though, at this point, any movement would be welcome.

Why does it seem like you’re always in the slowest line? This “curse” can also strike at the grocery store, the movie theater concession stand or the gas pump.

But is “slowest-line syndrome” a real thing? Is it just bad luck? Is there a way to predict which line will move the fastest?

Tom Stafford, who holds a Ph.D. in cognitive neuroscience, writes for BBC:

“When my lane is moving along, I’m focusing on where I’m going, ignoring the traffic I’m overtaking. When my lane is stuck I’m thinking about me and my hard luck, looking at the other lane. No wonder the association between me and being overtaken sticks in memory more.” 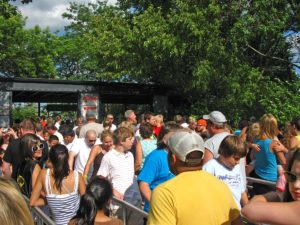 Additionally, we’re more likely to remember lines that slow as they get closer to the end as opposed to ones that start slow and then speed up.

So while it seems that you’re always stuck in the slow line, you’ve likely forgotten the numerous times when you’ve been in one of the faster-moving lines. You’re also more likely to be aggravated by the fact that those around you are moving faster than you are — this rage sticks with you.

So what can you do to avoid picking the slowest line?

Even though you can’t predict the future, there are some steps you can take to avoid landing in a sluggish line: 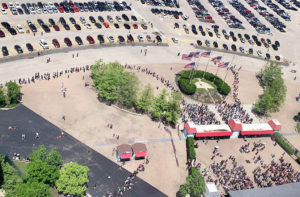 Above, the line on right leading to the security checkpoints at Six Flags Great America is significantly longer than the one on the left.

When in doubt, go left.

According to research, people tend to follow their dominant hand. Since roughly 9 out of 10 people are right-handed, it’s worth going left.

Avoid families at all costs.

While you can’t predict what delays the car in front of you at the parking toll lane will cause, you can avoid the family with three strollers full of bags in front of you in the security line.

Look past the horde.

If you’re in a crowded roller coaster station, people tend to congregate in the middle or wherever the queue enters the station. Politely squeeze your way past them to either end of the station, avoiding the front row which almost always has a longer line. 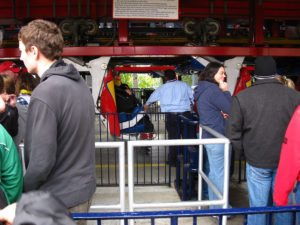 Picking a row of a roller coaster can be a gamble, especially when you can’t tell how many people are head of you.

Scope out the path of the line.

This may seem like common sense, but looking at the entire line from start to finish — if possible — may alert you to some sort of obstacle or obstruction in the line that could slow it down or make it longer than it appears. Is there a column in the way or some sort of distraction? It’s safe to assume that it’s a line you’ll want to avoid.

Unless there is a serious event ahead of you that slows the line (e.g. one row of a roller coaster is only seating riders every other train), stay in the line you picked first. As tempting as jumping to a shorter line might be, you’ll be even more frustrated if you move to a seemingly shorter line that slows considerably.

This is another no-brainer, but it’s worth repeating for the next time you’re planning your next coaster trip. When possible, visit parks and attractions when they’re more likely to have shorter lines. Go to your favorite roller coaster early in the day. Grab lunch early or later than the traditional lunch hour.

Don’t miss our 13 tips and tricks on how to spend less time in line.

What can parks do to prevent slow-moving lines?

Parks can also do their part to reduce or even eliminate lines from crawling.

Station groups help ensure that you won’t get stuck in a slow-moving line for one specific row.

Thankfully, many parks already use station groupers to assign guests to rows of popular roller coasters and other attractions. This prevents the possibility of you waiting in a line that is significantly longer than the other. It also prevents bottle-necking in smaller stations, distributing guests evenly across rows.

Perhaps one of the most ingenious innovations in the queue-biz is the serpentine line, where everyone is funneled into one line before being assigned to the next available window, booth, etc. 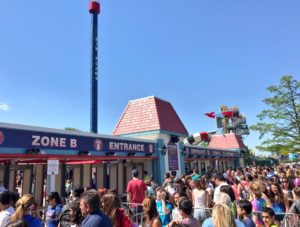 Serpentine-style line in use for security checks at Six Flags Great America.

I’ve seen serpentine lines at several parks, including Six Flags Great America which I visit frequently. Rather than having individual lines for security — which are notorious for bottle-necking — there are two lines (with entries on either side of the park’s entrance plaza) that corral guests into two switchbacks that terminate at a row of metal detectors. A security officer or park employee then directs incoming guests to the next available metal detector. Though one of the two lines will likely move slightly slower than the other, you eliminate the chance of standing in one line that seemingly refuses to budge.

According to the New York Times, survey results indicate many people are willing to wait twice as long for fast food if the restaurant uses this one-line, first-come-first-served serpentine system rather than having multiple lines.

Granted, this method isn’t feasible for some setups such as parking booths or other instances where space is limited. 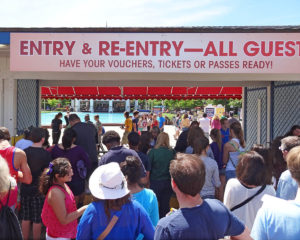 Separate entrances for passholders and guests without bags can shorten lines for everyone else.

Parks can offer faster-moving lines for people who are less likely to hold up a line — such as season passholders or those without bags. Be alert, though, as sometimes these VIP lines can be short-staffed, resulting in slower-moving lines.

Board attractions by group.

Some parks are already implementing the concept of using boarding groups rather than lines to reduce the length of time guests spend in lines. The Star Wars: Rise of the Resistance boarding system at Disneyland and Disney’s Hollywood Studios is just one example of how theme parks are changing the way we queue for rides.

At theme parks, lines are sometimes a way of life. Even with skip-the-line and time-saving passes, waiting in a line at some point is almost inevitable, even for day-planning masters.

However, there are steps that you and theme parks can take to reduce the likelihood that you’re standing in a line that is significantly longer or slower moving than the next.

If you’re interested in reading more about this phenomenon, I recommend checking out Why Does the Other Line Always Move Faster?: The Myths and Misery, Secrets and Psychology of Waiting in Line by David Andrews.

Do you have any tips or tricks to avoid the longest line? Share in the comments section below.