Theme parks and roller coasters are fun – waiting in long lines is not. If you want to save precious time during your amusement park visit you’ll need to steer clear of those long queues. Here’s our best advice to avoid wasting hours of your day by standing in line at the parks this summer.

You may not have realized it but almost every theme park blatantly tells you which days they expect to be the busiest. Take a look at the scheduled opening hours on the park’s calendar to get an idea of how crowded it might be. If the park is open later they are expecting it to be busier on that day. It’s a bit counter-intuitive but while the park may be open less hours on a certain day, you could end up getting to do more rides because lighter attendance usually equals shorter lines (though sometimes the park will run their rides at a reduced capacity as well). 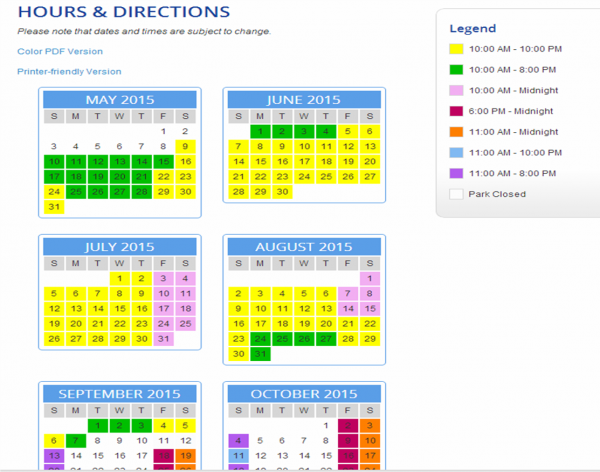 The dates shown in green look like a good time to visit Cedar Point.

The parks will be less crowded when 1.)  Guest haven’t arrived yet or 2.) Have already left for the day. Therefore, the hour after open and the hour before park close are vitally important for getting the most out of your day. Keep boarding the rides until the line is closed off – you won’t be trapped in the park overnight.

Some amusement parks have early entry for season pass holders or other special groups where the park is accessible only to these people for an hour before it opens to the general public. One example is at Walt Disney World, hotel guests get to participate in Extra Magic Hours where a select theme park will open early or close late for resort guests only.

Another way to get into a park early, at least at Disney resorts, is to reserve a breakfast before the park opens. I just recently learned about this trick on my recent visit to Walt Disney World. I was able to get a reservation at Be Our Guest restaurant for breakfast at 8:40am when I realized the theme park didn’t open until 9am! Not only was it cool to walk through the Magic Kingdom without thousands of other visitors, we were able to ride a view of the popular Fantasyland attractions before any lines built up. If you can book your meal early enough, you can get into the park early, eat, and get a head start on everyone when the ropes drop for opening. 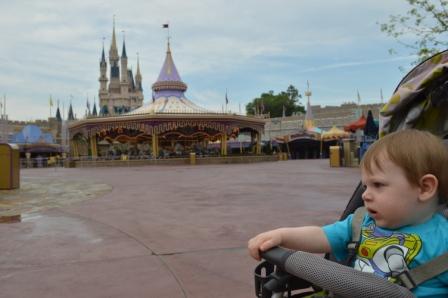 This same view will be flooded with strollers and guests a few hours later.

Avoid the crowd mentality when visiting a theme park. Upon entry, don’t get in the first line you see. Go to the back of the park first or any other area as far from an entrance as possible (some parks like Cedar Point in Sandusky, Ohio have more than one entrance). The majority of guests will take lunch between 11:30 and 1:30pm – so don’t eat during this time. Same goes for breakfast and dinner. A great time to ride is during a parade, major show time, or firework celebration as these are all events that will prevent guests from getting into ride lines.

Here’s a pro tip from the coaster boys – know the capacity of the rides and go on the lowest capacity ones first. Theoretical Hourly Ride Capacity (THRC) is defined as the number of guests per hour that can experience an attraction under optimal operating conditions. THRC is calculated by: Riders per bench (row) *benches per car*cars per train*(60min/ride time minutes). A higher capacity ride results in potentially shorter waits. Your strategy should be to hit the low capacity rides first or last while the crowds are thinnest. For example, Peter Pan’s Flight at Magic Kingdom is low capacity compared to many of the other attractions at the park so it’s wait times are almost always higher than the average wait.

How frustrating is it to see a roller coaster train climbing up the lift with a few empty seats while you stand in a hot, miserable line? Fortunately, many amusement parks today are starting to use single riders to fill those empty seats insuring every train goes out full. Single rider lines are often short because families come to the park to ride together, not by themselves. If your party doesn’t mind being broken up you can save time by queuing as single riders. Who knows, you may even get lucky and be able to ride together after all.

Almost every amusement park today has some form of ride reservation system – whether included or as an extra fee. Walt Disney World has switched to the Fastpass+ system where resort guests can reserve up to three ride times months before they visit the park. This program is included in your park admission. Regional amusement parks, like the Cedar Fair chain, Six Flags, and Busch Gardens, require an additional fee on top of the regular park admission and may only give out a select number of passes per day. In fact, some parks have different tiers of pay-to-cut, where the most popular or new attractions are the most expensive. Starting this year, Worlds of Fun will be the first park in the Cedar Fair chain to offer three separate Fast Lane options: Fast Lane Rides, Fast Lane Slides, and Fast Lane Plus. This may trickle down the chain if the separate water park FL proves to be a big seller.

8. Join a coaster club for the ERT

This may be a little too nerdy for some of you but if you join a roller coaster club you can go to events with Exclusive Ride Time (ERT) where the most popular attractions in the park are open only to club members. If there are only sixty club members at the event and each coaster train seats thirty, well, you do the math. You’re going to get to ride A LOT with literally no waiting. You may not even have to leave your seat. Then you can focus the rest of your day riding the less popular attractions with the shorter wait times. Heck, you may even get a free behind-the-scenes tour and free food too.

Popular and well known coaster clubs recognized by a majority of amusement parks are:

If the weather forecast doesn’t look great, sometimes it pays off to brave it anyways. If there is a chance of rain on Saturday and the forecast is sunny on Sunday, go on Saturday anyways with the hope that others will delay their visit by one day. If it starts to rain, don’t immediately dash for the exit, stay in the park when others go home – you may be rewarded for it.

The time of year for visiting an amusement park is vastly important and is probably one of the biggest contributing factors to attendance level. I recommend visiting during the shoulder seasons – early spring or between summer and the start of Halloween events. Of course, a negative of visiting early in the year is the shiny new ride may not be open yet. Parks are busiest during weekends, school holidays, and public holidays. During a holiday weekend, the holiday itself will generally be the least busiest day (Monday on Memorial and Labor Days). If going to Walt Disney World, Disneyland, or Universal you can use Touring Plan’s Crowd Calendar to help plan your visit for the optimum time period.

I read this excellent tip from Things to Do in Theme Park Queues by Scott Wegener: if a queue has two lanes or entrances, take the lane that is opposite to the side of the road people drive on in that country. For example, most people in the USA keep right when picking a line or side because we drive on the right side of the road. Taking the left queue could be less crowded.

Starting around 2013, we’ve suddenly seen an explosion of giant plinko games positioned near the entrances of the longest lines at amusement parks. From what we’ve seen. the average cost to play is $5 and the best prize is front of the line (FOL) passes. 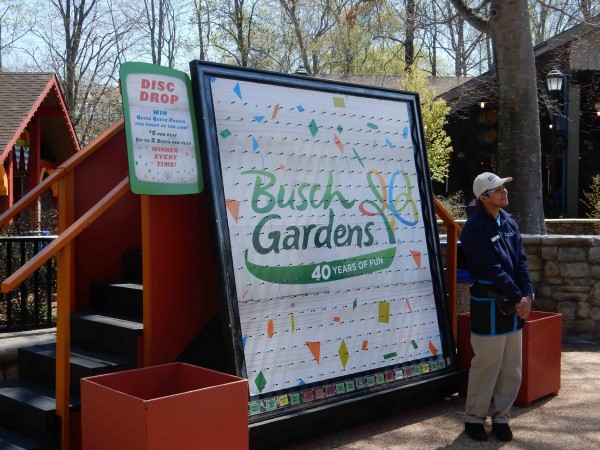 This game is called Drop Disc at Busch Gardens.

If there’s one thing you take away from this list should be this: do some research. Know the park – go over maps and guidebooks so as to not waste any time figuring it out while at the park.  Know the ride capacities. Look at the park in Google maps. Have a general plan but know you may have to shift from it. Believe me, a little bit of time doing your homework before you go out to the park can save you a lot of time the day of your visit.

Tips to pass the time while standing in line

A bit of a disclaimer: not every tip is guaranteed to work every time because there are still situations beyond control, like sudden break downs or other emergencies that will keep you waiting. If you try our tips but somehow still end up getting stuck in a long line then here’s three pieces of advice for making the theme park wait seem shorter:

Use these mind hacks to make the wait seem shorter: if a line’s under thirty minutes convince yourself it will be over in no time. For a line of thirty minutes or more, pretend you’re never actually going to leave the queue, assume the queue IS where you’re meant to be, not on the ride. This helps to take away anxiety, which makes time slow down.

Time flies when you’re busy. Talking, playing games, theorizing over how to create a perpetual motion machine –if you keep your mind busy the line will fly by. This is where books and apps on your phone come into play. May I recommend Happy Fun Land – a hilarious book about a crazy new amusement park opening in China.

Interacting with those in your group or, even better,those you don’t know in front of behind you, is a great way to pass the time, both for you and them. You never know, you might even make good friends as you already have at least one thing in common – theme parks. I was waiting in an hour long Maverick queue at Cedar Point when another, very outgoing guest got everyone waiting to do the wave and was very entertaining. Some people loved it, others hated it, but it got everyone talking to each other and the hour went by in no time.

Did I miss any time saving tips? I’d love to hear from you! Do you use any time saving techniques that I’ve failed to mention here? If you use these tips and they help you out, let us know too!

Nick Weisenberger is the author of Coasters 101: An Engineer’s Guide to Roller Coaster Design.