Behind The Screams: A Look Inside Worlds of Fun’s Halloween Haunt

Prior to my visit to Worlds of Fun’s Halloween Haunt last week, I was given the opportunity to get a look “behind the screams” at several of Worlds of Fun’s mazes, as well as inside the makeup room where more than 400 scare actors are transformed into monsters on each night of haunt. 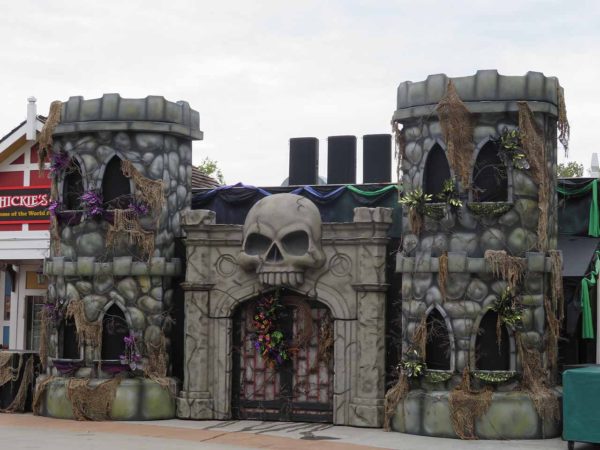 Proving that there’s so much that goes into a Halloween event other than the surface level of just “mazes and scares,” we wanted to give you a little behind the scenes look at what we saw. 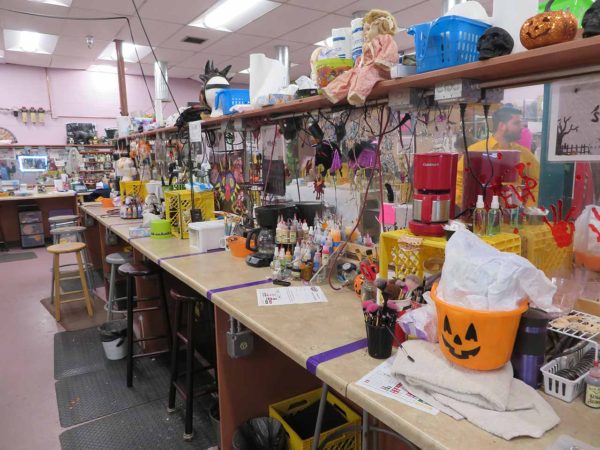 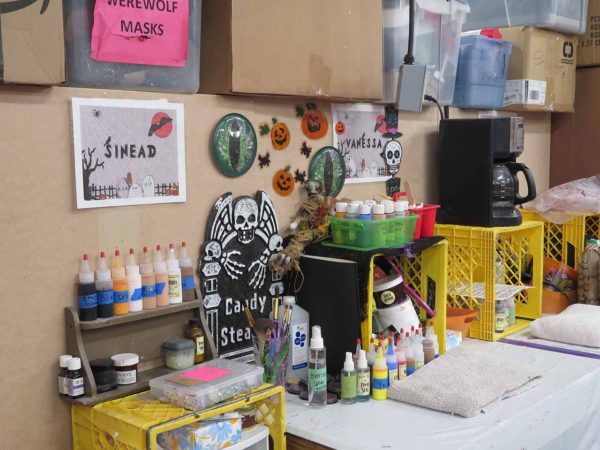 Each night at Worlds of Fun Haunt, more than 400 scare actors are transformed into “monsters” for the various haunts and scare zones, and it’s all done in this room. 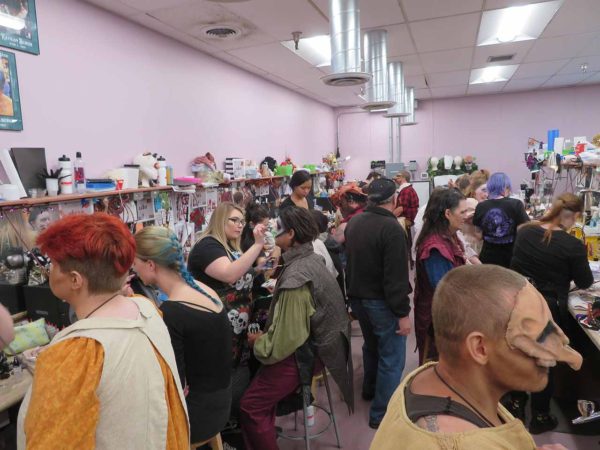 As you can tell by the first photo, as the opening of Haunt approaches, it can get a little chaotic in there. So much face painting being done, and masks being applied. 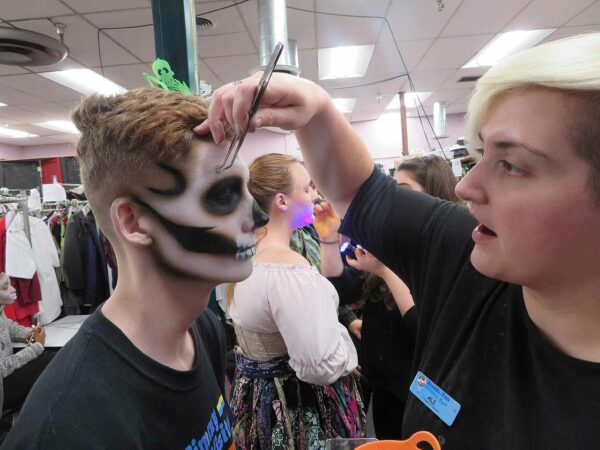 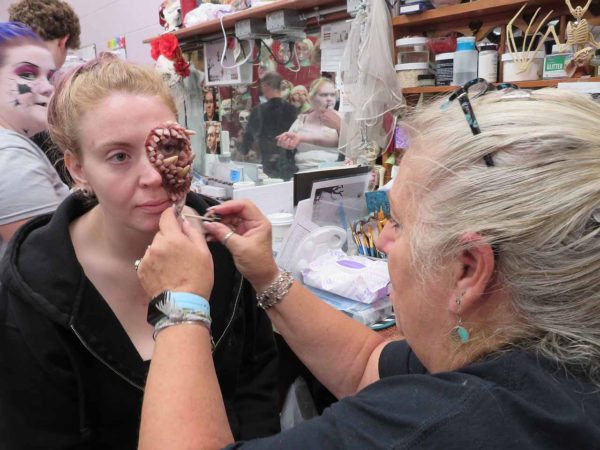 The attention to detail, from individual rhinestones above the eyebrows of these skeletons, or whatever’s going on with this girl’s eye, is incredible to see in person.

Blood On The Bayou

Seeing the mazes in the light provided a look at the level of detail that goes into each haunt, that you might not otherwise see while you’re being chased by scare actors and walking through the dimly lit fog. 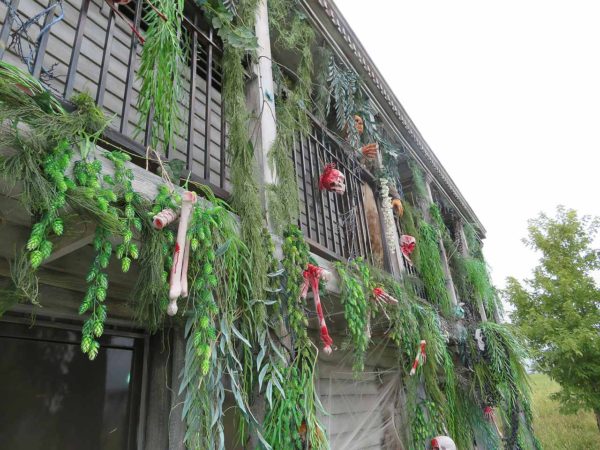 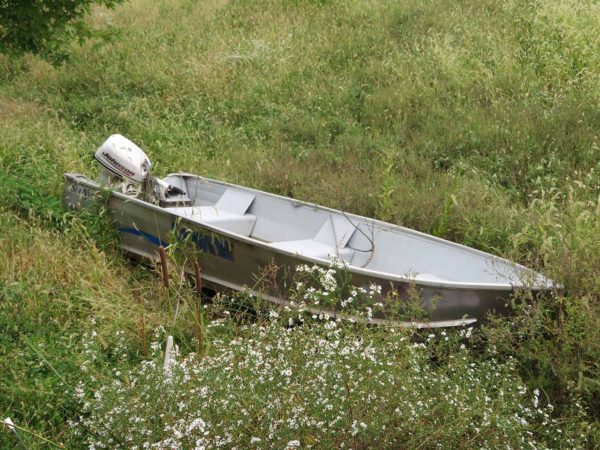 Outside the maze, there is moss and plants on the outside of the plantation house, and even a boat in the nearby tall-grass, details that I definitely didn’t notice later on in the night at Worlds of Fun Haunt. 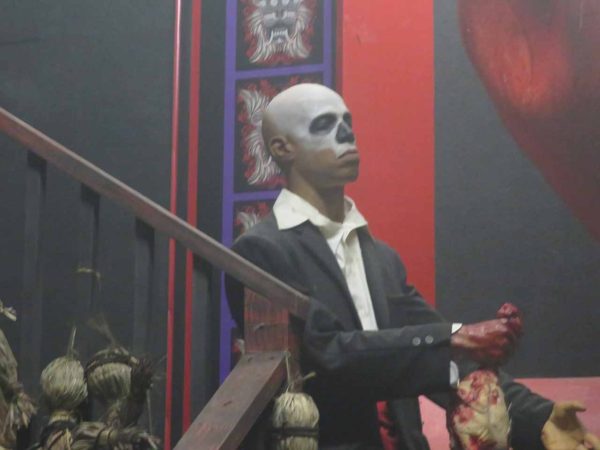 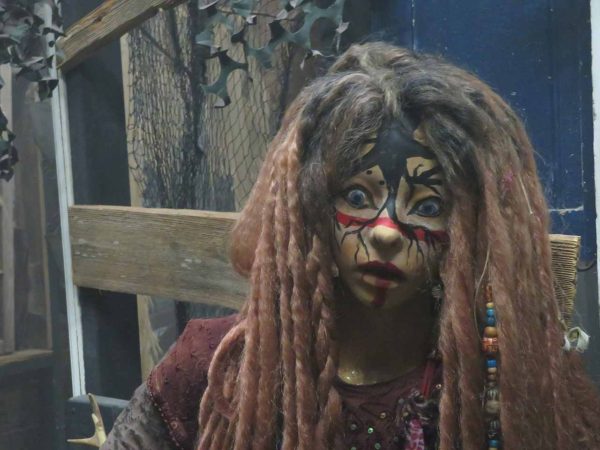 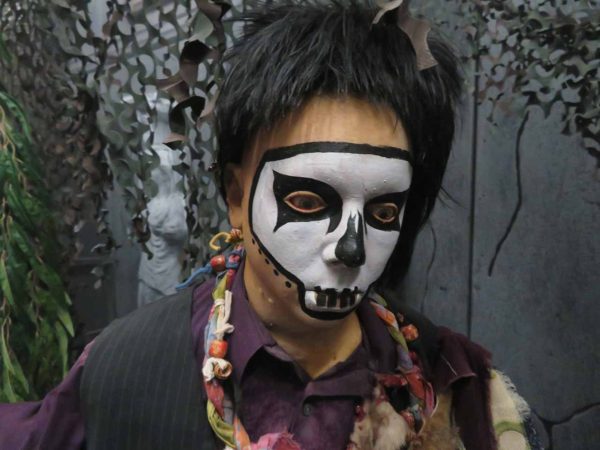 The mannequins inside this maze are almost as elaborately made-up as the scare actors, making it difficult to decipher which is which when walking through the maze. These mannequins are also scattered throughout the maze. 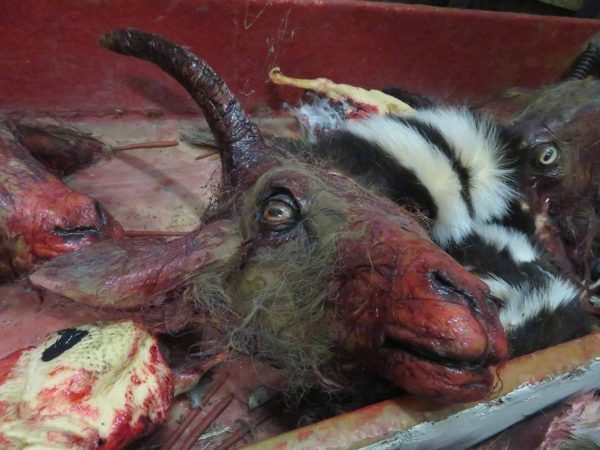 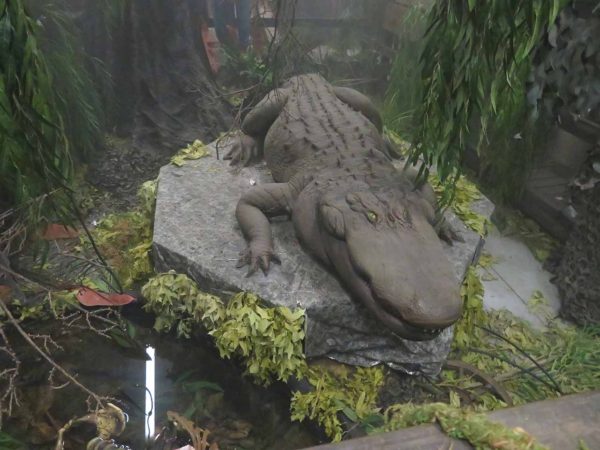 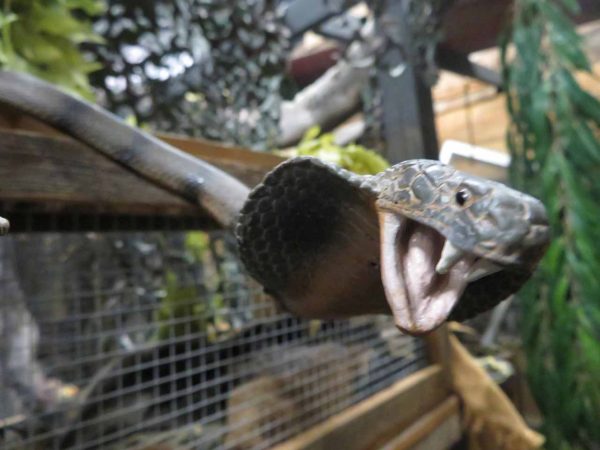 From the severed heads of goats, to the swamp gators, to cobras staring you in the face, there are plenty of bayou “creatures” ready to terrify you inside the maze. 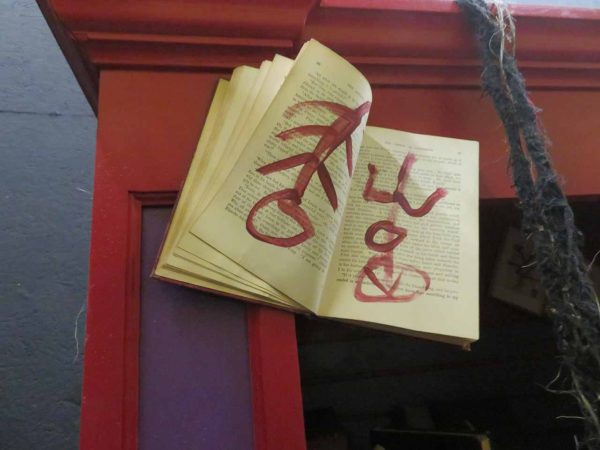 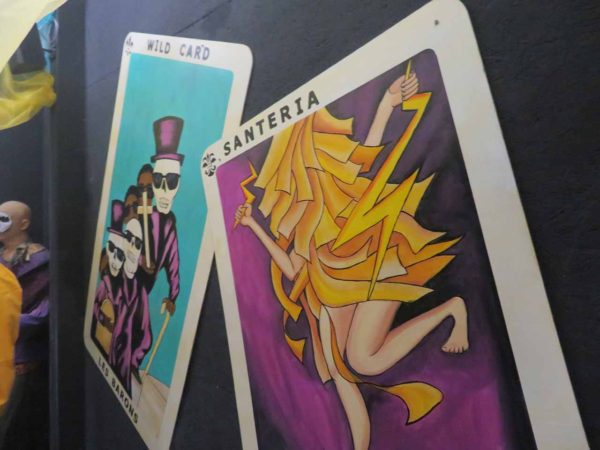 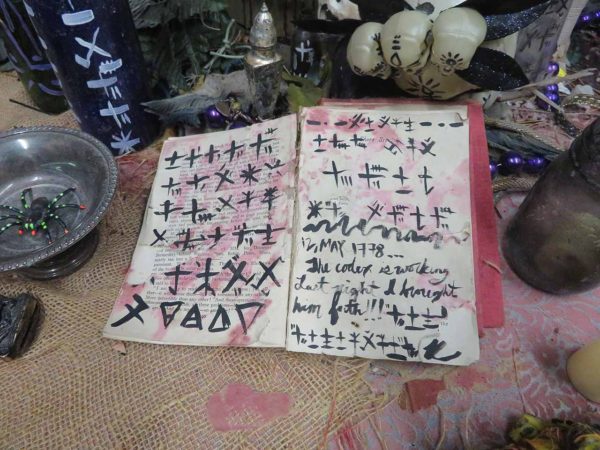 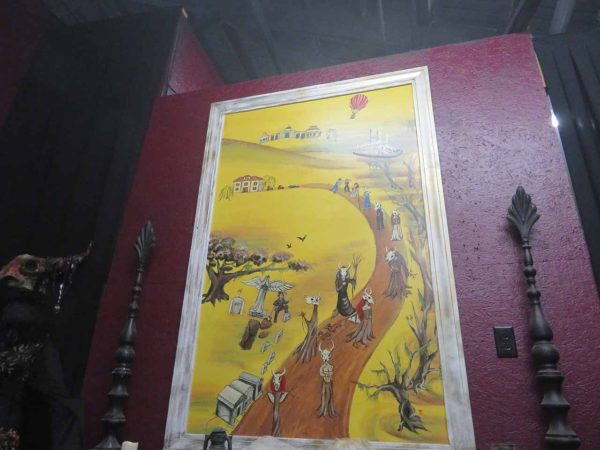 Another look at the level of detail inside the maze that would likely be missed or just passed by during a walk-through at night. The painting above in the fourth photo is a custom hand-painted painting for Worlds of Fun, and even features the park’s signature hot-air balloon in the top.

Lore Of The Vampire 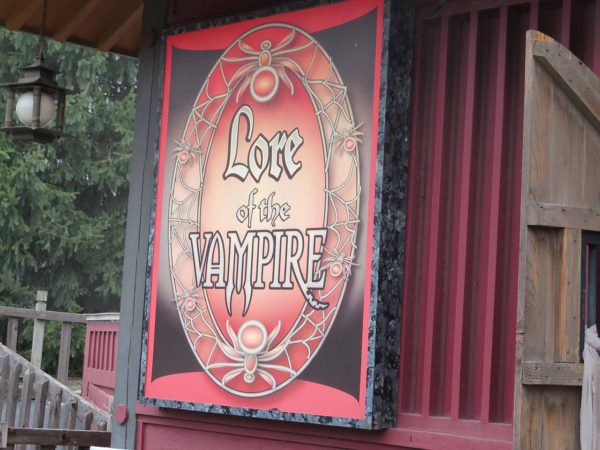 Lore of the Vampire is one of the longer haunted mazes I’ve ever walked through, and the level of detail was amazing, especially in the maze’s latter half. 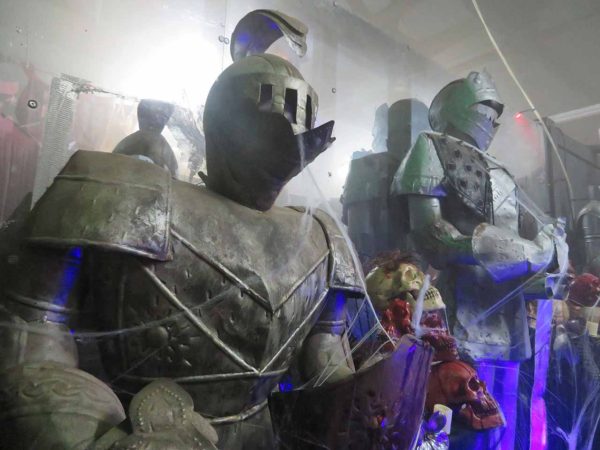 Haunt only takes place on the spookiest of “knights.” 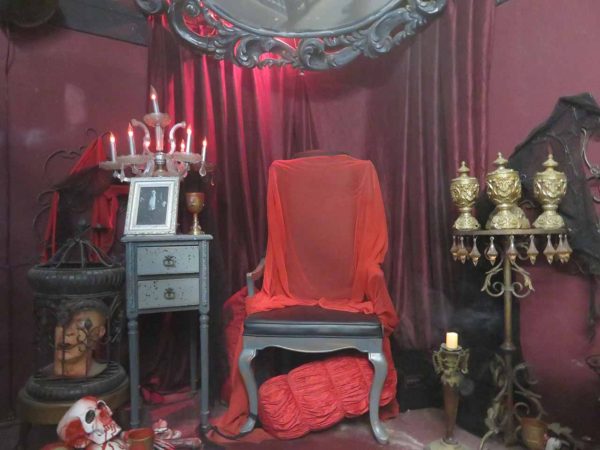 A throne, readied for a scare actor. 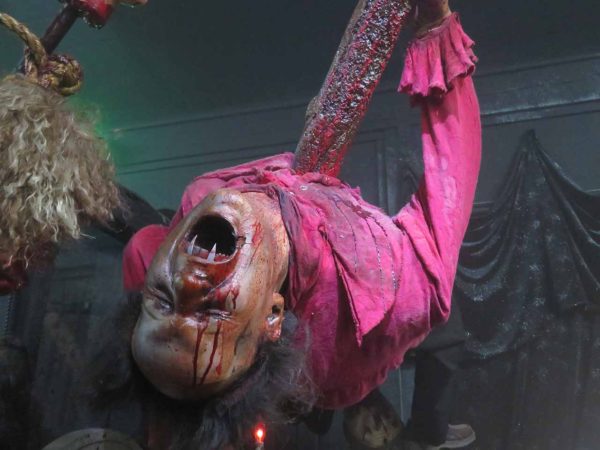 From the fangs to the fake blood, these mannequins were terrifying, even in the light. 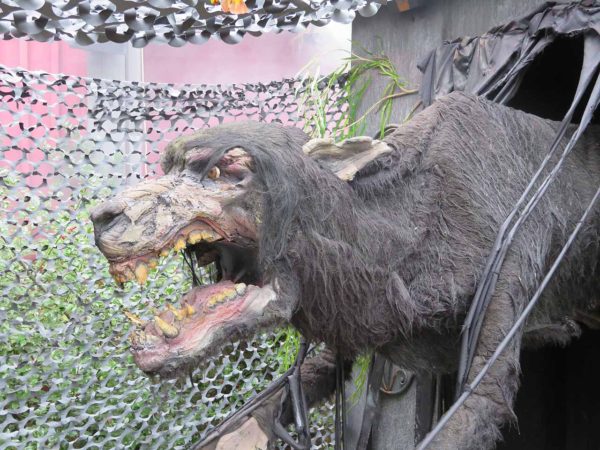 Watch out for this guy! He’ll get you! 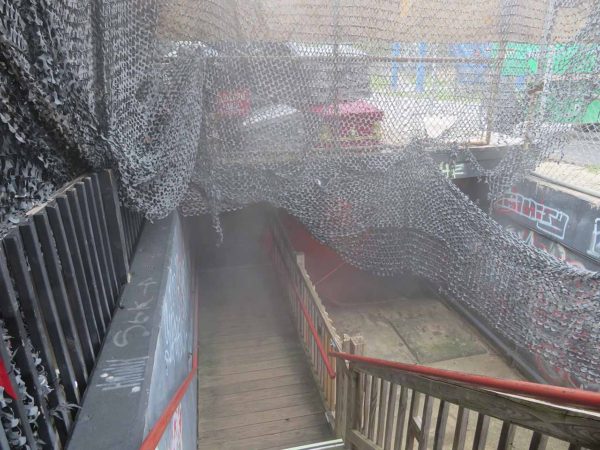 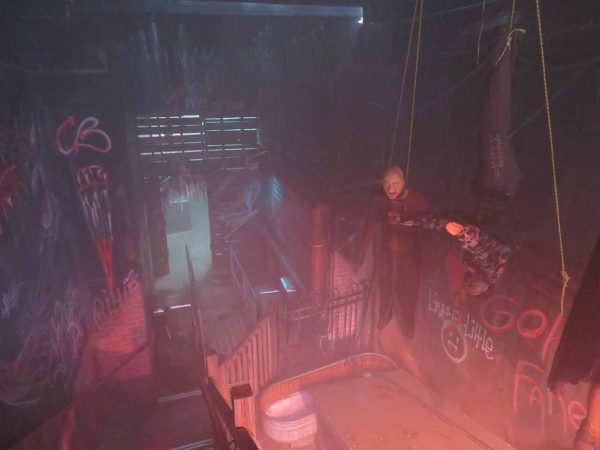 In the second half of the maze, you’ll enter through what used to be part of the queue for Orient Express, which closed in 2003. 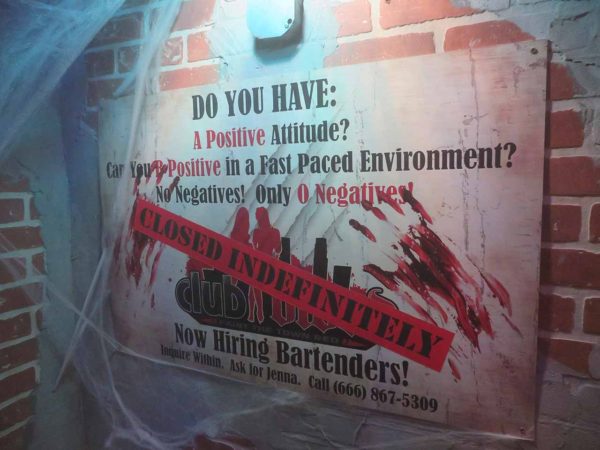 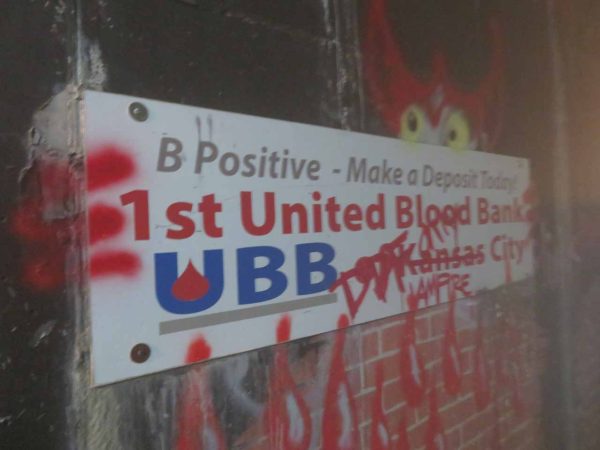 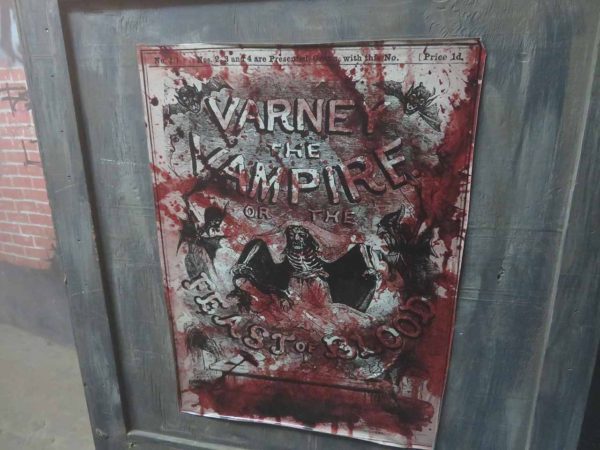 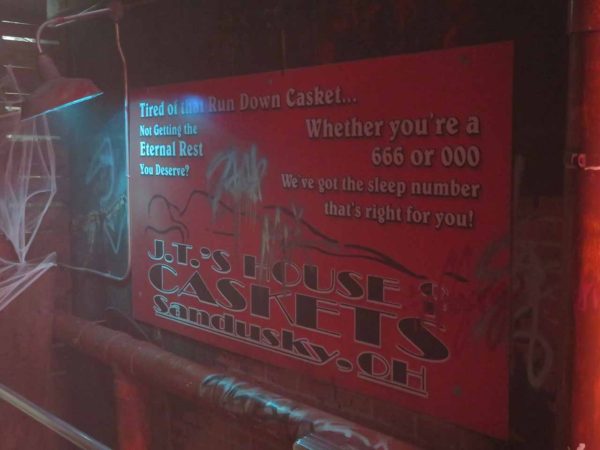 There’s some fantastic detail in the “train station” signage, including a reference to Club Blood, a former Worlds of Fun Haunt, and J.T.’s house of Caskets, in Sandusky, OH, home of fellow Cedar Fair park, Cedar Point.

Worlds of Fun Haunt takes place on Fridays and Saturdays through October 26. Worlds of Fun is also open on Sundays in October from 11:00am-7:00pm, but there is no Sunday Halloween Haunt. For more information, be sure to visit Worlds of Fun’s website, and follow the park on Facebook, Twitter, and Instagram.