Welcome back to Coaster101.com’s “19 for ’99” series, where we’re taking a look at 19 of our favorite coasters who are celebrating their 20th anniversary this year. This week, we’re headed just outside of the nation’s capital Washington D.C., where we are highlighting Joker’s Jinx at Six Flags America. 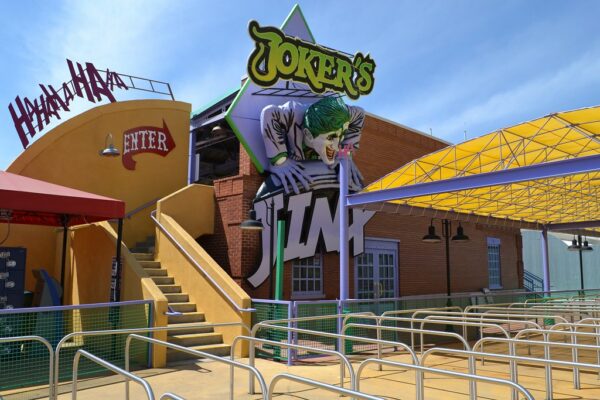 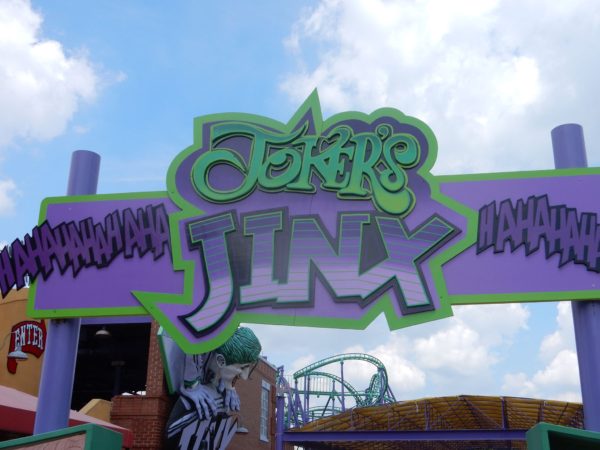 In 1998, it was announced that Adventure World, after a $27 Million off-season investment, would become Six Flags America in 1999. This announcement was fresh off of Premier’s acquisition of the Six Flags Parks earlier that year. According to The Washington Post, “the move was intended to raise the profile of a park that never had the fan appeal of Paramount’s Kings Dominion or Busch Gardens in Virginia.”

As part of the transformation to Six Flags America, plans for the park included adding a 6-acre Batman-themed section called “Gotham City” that featured two new roller coasters, bumping the total number at the park to seven at the time. One of those roller coasters would be Two-Face: The Flip Side, a Vekoma Inverted Boomerang that operated at the park until 2007 (and now operates as Diabolik at Movieland Park in Italy), and the other would be Joker’s Jinx, manufactured by nearby Premier Rides (no relation to Premier Parks), headquartered in Baltimore.

On April 1, 1999, it was reported by UltimateRollerCoaster.com that the Joker’s Jinx track was complete, and testing of the new roller coaster began the week of April 4.

Joker’s Jinx opened on May 8, 1999 to great fanfare. According to the Baltimore Sun, about 21,000 people showed up at Six Flags America on opening day in 1999 — three times the expected number, and the feedback was great.

“Of all our rides,” Premier Rides President Jim Seay told Frank D. Roylance of the Baltimore Sun in 1999, “Joker’s Jinx is probably one of the most intense layouts, a tremendous amount of activity in a very small amount of space.”

In addition to 2,750′ of track and four inversions the main “gimmick” for Joker’s Jinx is its 0-60mph Linear Induction Motor launch, which takes guests’ breath away almost immediately out of the station. 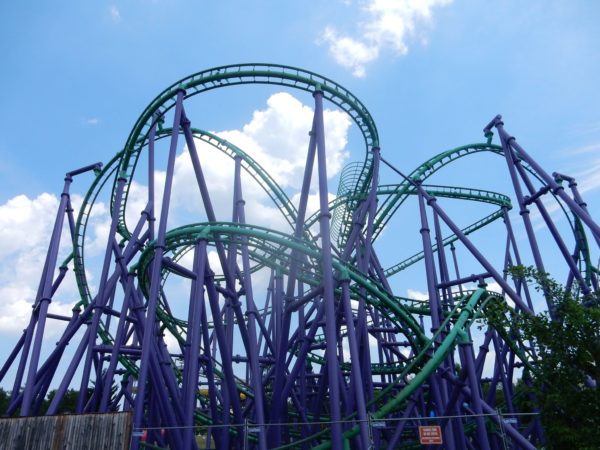 The LIM launch was a substitute for a gravity-powered coaster, one featuring “a slow, clanking, chain hoist up the coaster’s first hill.” From The Sun: “

“That initial kick is all the propulsion the Joker’s 9-ton train gets. The rest is all momentum and gravity. The motors’ 7,000-amp electrical demand — for four seconds the equivalent of adding a large shopping mall to the grid — would flicker the neighborhood’s lights without support from power storage capacitors custom-designed by Constellation Energy Source.”

Check out the below interview with Seay, who talks a little bit about the technology behind the Linear Induction Motor technology.

Roylance had a great overview of Joker’s Jinx in his article.

“The $10 million ride’s hot new linear induction motors will launch coaster fanatics from zero to 60 mph in just over three seconds. As they whip through a “spaghetti bowl” of 55 curves and dips and four upside-down loops, some may wish the half-mile-long ride could last a lot longer than just two minutes. Others may pray that God — and not one of the steel supports whooshing past their skulls — will put a quick end to their terror.” 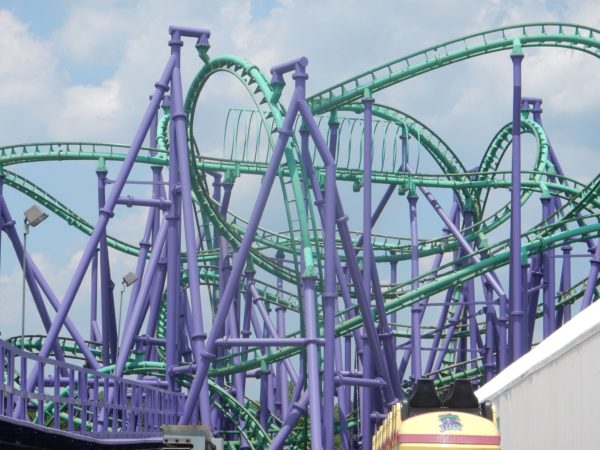 As far as the ride experience itself, it’d be hard for us to top this description from Coaster-Net.

Gothamites first find themselves entering a warehouse building converted into a funhouse by the Joker. Once aboard a yellow and pink train, the Linear Induction Motor launch does its duties and propels riders down a tunnel to reach the 63 mile-an-hour top speed just 3 seconds after leaving the boarding area. Reaching the end of the tunnel, the train rockets skyward into the Joker’s twisted spaghetti-bowl of steel. Purple columns fly by within inches of riders as the track twists through the double-inverting 180-degree course-reversing Cobra Roll and dives down the maneuver’s conclusion to immediately begin the third 360-degree vertical twist – the Sidewinder.

The pace slows momentarily as the track wraps around to the coaster’s highest point, around 540 degrees of curves leading to a straightaway through a series of rings. The speed begins to pick up again as the train plunges back down into the mayhemic curvature with a spiraling dive to the left. The train quickly navigates through a second dive and begins changing direction again with a Figure-Eight formation to ground level. After another banked curve, the final Corkscrew flips the track over once more and sends the train into the brakes.

Are you a more experiential person? Put Coaster-Net’s words into pictures with the POV video from Midway Mayhem below!

If the layout feels familiar to you, it is because Joker’s Jinx, which was Premier Rides eighth ever coaster, has a nearly identical layout to four other coasters manufactured by Premier Rides, the 1996 Flights of Fear at Kings Island and Kings Dominion, the 1998 Mad Cobra at Suzuka Circuit in Japan (which later became the Crazy Cobra at Discoveryland in China in 2006), and 1999’s Poltergeist at Six Flags Fiesta Texas, which opened several weeks after Joker’s Jinx. The main differences in Joker’s Jinx and the Flight of Fear clones are that Joker’s Jinx is outdoors and there’s no mid-course brake run. 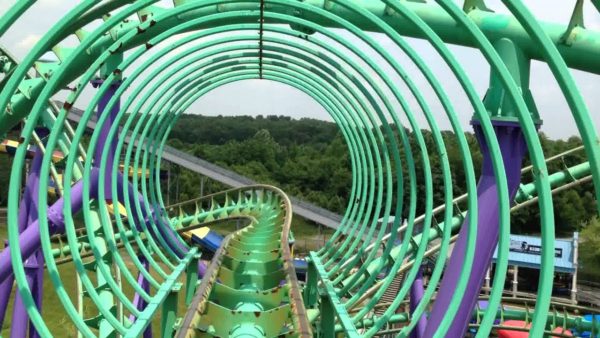 You might wonder exactly why a cloned coaster is one of our favorite coasters of 1999, and it all boils down to my first (and only) ride on Joker’s Jinx, which happened in 2016. It was my first “zen” ride.

During my visit, the lines were minimal, so I decided to wait (two trains) for the front row. As soon as I got in line in the front row, the ride closed momentarily when the train on the tracks got stuck in the final brakes before the station. The ride operator came over the speaker and told everyone that the ride would be down temporarily, and we could either wait in the station, or come back later. Her comments caused a mass exodus from the queue, except for one person.

No seriously. The queue has emptied. I'm currently the only one here. pic.twitter.com/ZyklLUkGt1

Shortly after everyone left the station, the train slowly rolled into the station, released from its holding time in the brake run by Six Flags’ Maintenance team. The train cycled three times, just to ensure that the brake issue wouldn’t happen again. By the time the all-clear was given, there were only three people in the station, me, and two other guys waiting for the front row. The gates opened, I boarded. The gates closed, and I was the only one riding Joker’s Jinx. In my years of coaster riding, a zen ride is something that has only happened for me three times, but I’ll always remember the first. 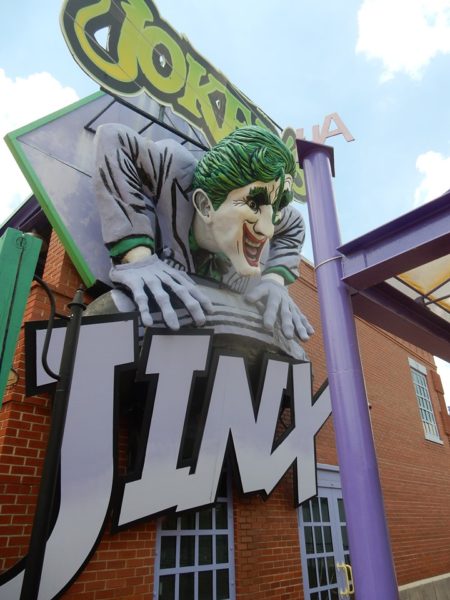 For more information about Joker’s Jinx, be sure to read the Six Flags America ride page.

Come back in a few weeks as we take another look at one of our favorite 1999 coasters that is celebrating its 20th anniversary this year!