#TEOTWAWKI: Inside The Clues of Kings Island’s 2020 Announcement

Since the closure and subsequent removal of Firehawk at Kings Island, there has been constant speculation as to what would replace the Vekoma flying coaster in the park’s X-Base area. With all signs pointing to a new roller coaster to replace the departed Firehawk, we wanted to take a look at the various teases that the park has been releasing to fuel the speculation. 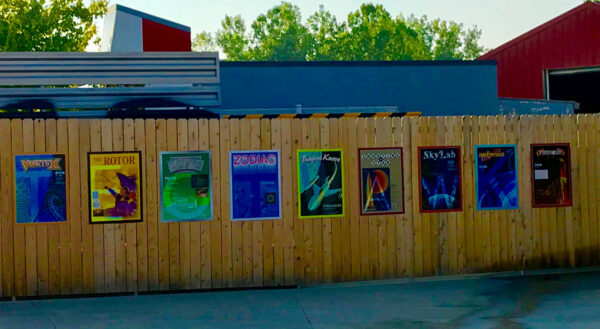 Whats Behind That Wall?

A construction fence near Firehawk’s former entrance has been at Kings Island for the duration of the 2019 Season. On July 22, two posters popped up: Invertigo with a faded “K” in the background, and Firehawk with a faded “I” in the background. Through the end of July, more posters were added, until there were 9 attraction posters, some current, some former, that spelled out TEOTWAWKI. 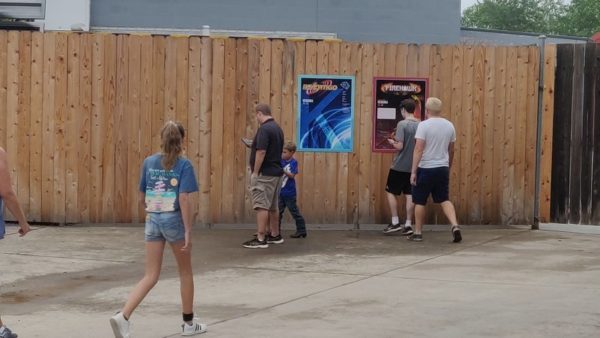 According to Kings Island, “Letters in the background of each poster combine to suggest the acronym, TEOTWAWKI  or ‘The End of the World as We Know It.’ While some Kings Island fans are referencing the REM song of the same name, others think the letters have a deeper meaning. One thing’s for sure, this area of Kings Island is far from ‘The End.’ In fact, some have suggested it’s only the beginning.” 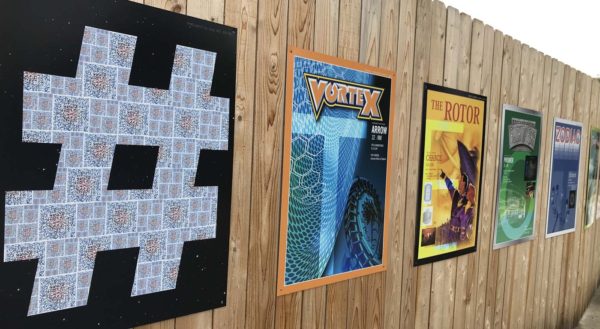 A tenth poster, featuring a “#” (pound sign if you’re above a certain age, hashtag if you’re below that certain age) that was composed entirely of QR codes. If you scanned that QR code, you were taken to a Change.org petition from “Concerned Citizen,” urging Kings Island to reveal what was behind the construction wall.

“It’s time Kings Island provides us with answers about what’s happening behind the construction fence in Coney Mall,” the petition reads. “The area of the park in question has long been rumored to be the storage facility for extraterrestrial space flight technology, and a proving ground for aviation innovation.  Fences were installed in late 2018 in an effort to prevent public access and create a cloak of secrecy and conspiracy never before seen.”

The petition then cuts to the chase.

“Now the public is demanding answers.  We are petitioning Kings Island, and its owners, Cedar Fair, to reveal what is happening.  To date, no one at the park has commented publicly on the access restrictions, but cryptic messages have begun to appear implying it’s almost the ‘end’.   Satellite and aerial footage have revealed construction, but of what? How long can this go on without public intervention and knowledge?

Sign this petition today to let Kings Island know they can’t keep secrets any longer!  Without your support- these questions may never be answered!”

Currently, this petition has nearly 2,600 signatures, including one from a “Mr. Christopher,” who might know what’s going on inside of Hangar 18, where Flight of Fear is located.

“23 years ago, my father was involved in the Hangar 18 incident. What he did is forever ingrained in my memory, and I never EVER want to see what happened to him, happen to someone else. Kings Island has a moral obligation, nay, a moral DUTY, to let us know what is going on behind this fence. Do it for the safety of our town, our state, and our planet. It’s the right thing to do.” 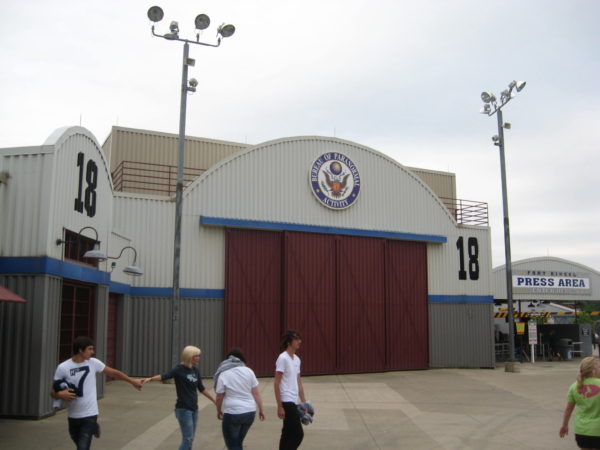 23 years ago is a clear reference to 1996, the opening year of Flight of Fear at Kings Island.

What We Don’t Know:

Kings Island revealed the date of their announcement as this Thursday August 15, 2019 at 10:00pm.

In case you’re curious as to where the announcement takes place, the coordinates listed on this announcement direct you to the immediate center of X-Base, between Flight of Fear and the former Firehawk entrance. 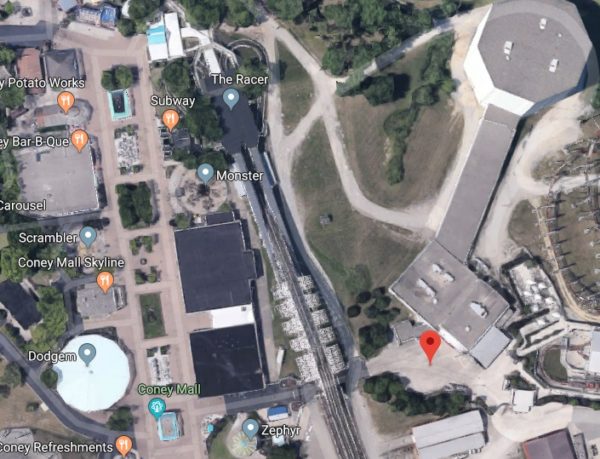 After months of speculation as to what’s behind the fence in Coney Mall, Kings Island will make a major announcement Thursday, August 15 at 10 p.m. All guests visiting the park that day are invited to attend. While Kings Island closes August 15 at 8 p.m., select rides, games and food locations will remain open in Coney Mall for guests to enjoy from 8-10 p.m. 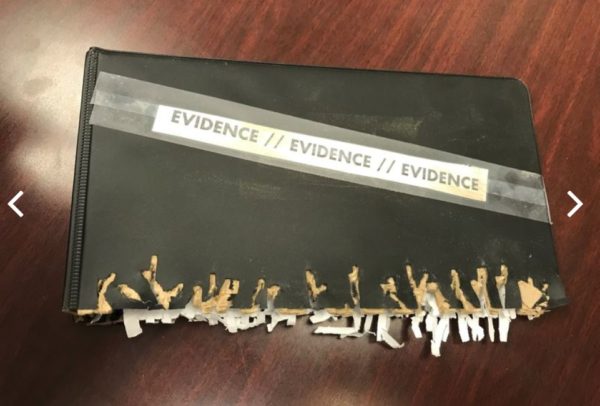 Kings Island sent Cincinnati FOX affiliate FOX19 several clues that relate to the new attraction, which they posted on their website. The “clues” come in the form of a shredded 1-inch binder marked “Evidence.” 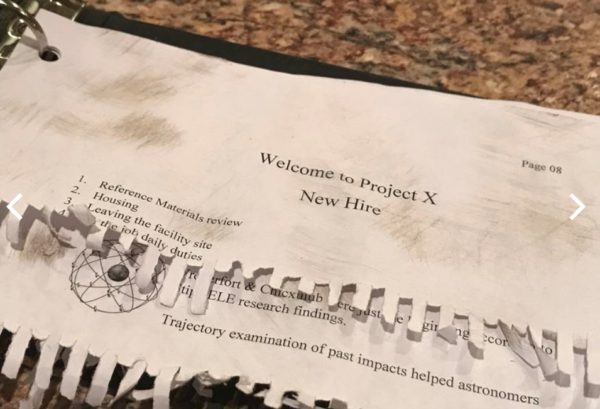 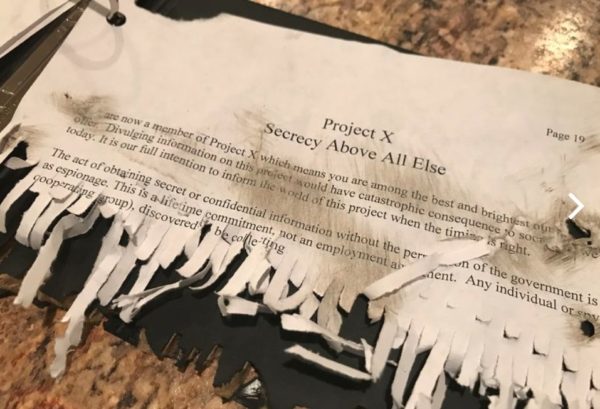 The clues seem to create a backstory for X-Base, with the evidence coming in the form of a “New Hire” Manual for Project X. Project X appears to be a secret government organization, but we’re not quite sure what they’re about. If the tie-ins to Flight of Fear are to believed, we might be dealing with a “Men In Black”-esque organization that investigates aliens and the paranormal. 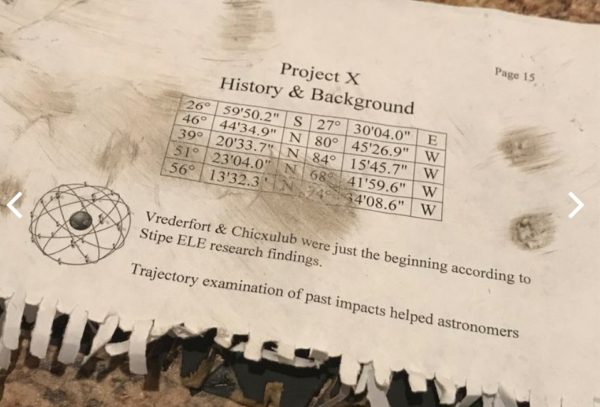 There are some similarities with four of these non-Kings Island locations, and they all have a tie-in to craters. 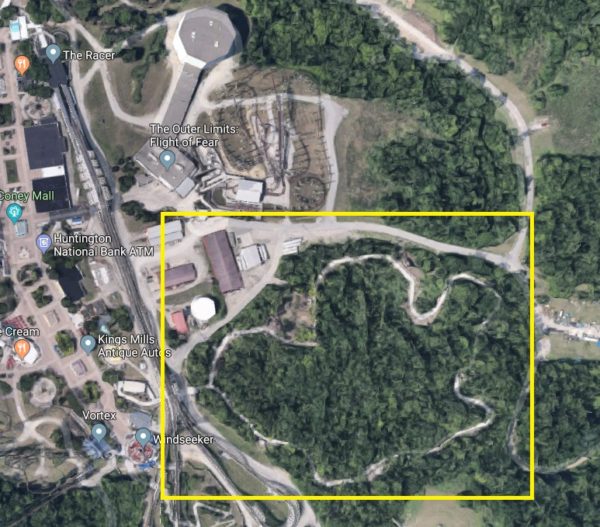 Worth noting. Kings Island’s Dinosaurs Alive closed in 2017. Hm. Should it be assumed in Kings Island lore that the Chicxulub Crater that took out the Dinosaurs also took out Firehawk, even if a year later? It would make sense, given their proximity to each other. 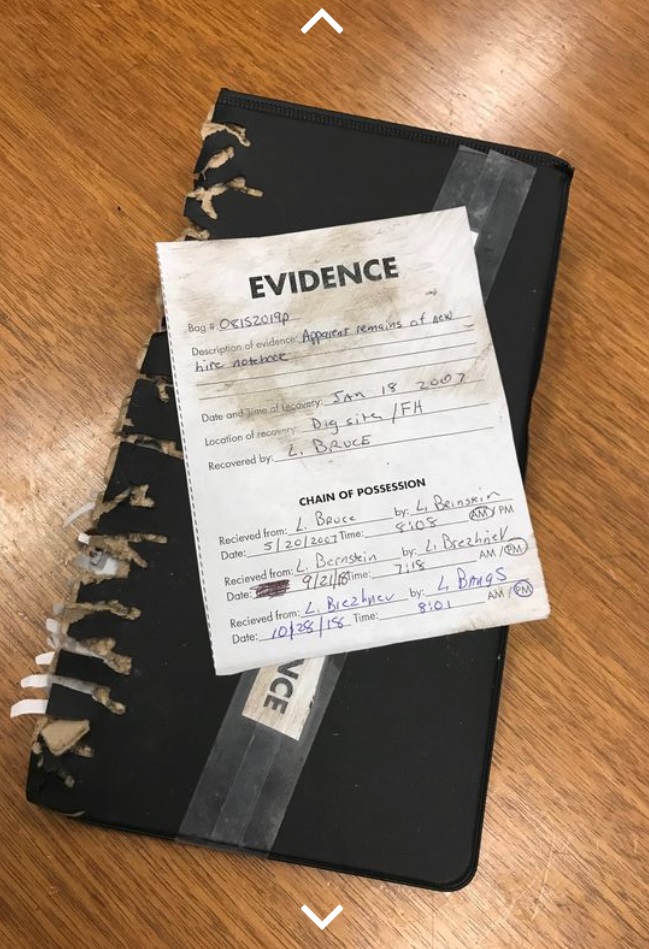 Diamondback will soon lose its place as the longest steel coaster at Kings Island. pic.twitter.com/jOaOB5qQwI

We have confirmation (as if there wasn’t enough confirmation already) that Kings Island’s 2020 project is a steel roller coaster.

If this coaster is indeed longer than Diamondback’s 5,282′ layout, it will rank accordingly:

Going Up? Another Clue.

Local12 Reporter Clancy Burke was given these coordinates to find another clue for the roller coaster.

Right now I’m at Kings Island ahead of their BIG ANNOUNCEMENT. I’ve just been given my coordinates that will lead me to an exclusive clue. Before I go on air at 9:45 do you guys have any guesses as to what the announcement is???? pic.twitter.com/sm0MCazwsm 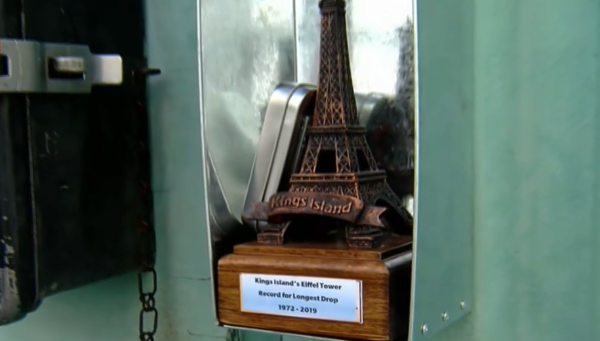 According to this image, Kings Island’s Eiffel Tower was the former park record holder for “Longest Drop” at 275′ tall. In 2020, it appears that record will be broken!

Spotify? Wait? What? That’s a clue too?

Thanks to C101 Reader Connie who has tipped us off to the #TEOTWAWKI Spotify Playlist that Kings Island has put out.

As of this morning, the playlist has 11 songs, lasting 49 minutes. These are the songs listed in the order they were added to the playlist.

There’s a lot to unpack here. Could these be clues? A lot of the titles refer to an “End” — The end of what? Do the first letters of the songs spell something? What about the first words? I can’t come up with a way to tie all of these artists together, especially with Toby Fox and The Comet Is Coming being instrumentals.

Part of me wants to “Finish What [I] Started,” but I probably “Need to Calm Down” in looking too far into these songs.

What does it all mean?

In short? We don’t know all the details of what’s coming. If you know where to look, there are plenty of hints out there about the attraction that Kings Island will be announcing on Thursday. Will it be a Giga coaster? Will the track be blue? Who can really tell at this point? 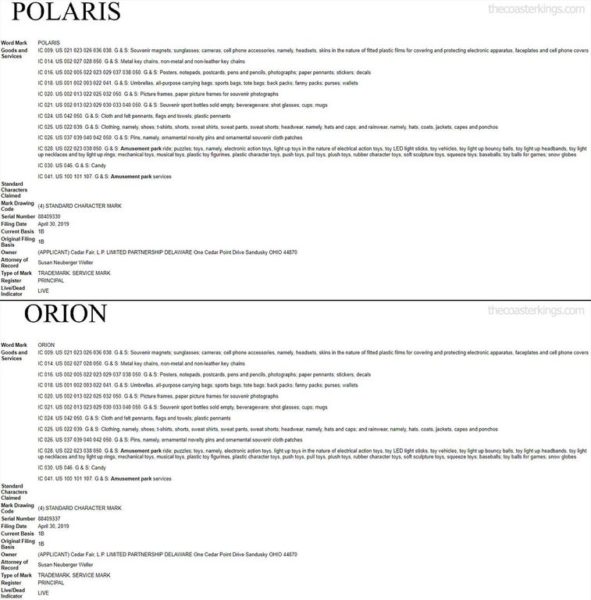 For the astronomically uninitiated, Polaris is the North Star, the brightest star in the sky. Orion is a prominent constellation located on the celestial equator and visible throughout the world.

Could they mean something? Sure. Chains trademark ride names all the time. It’s how the internet knew the name of Candymonium at Hersheypark. But, just because a name is trademarked well in advance doesn’t necessarily mean it’s going to be a roller coaster. It could end up being a motor oil company. 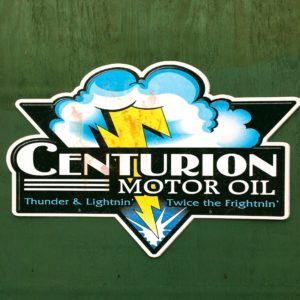 That said, with a back story being developed for X-Base/Project X/Flight of Fear, a celestial name like Polaris or Orion would make a lot of sense.

Personally, I could see the name being Polaris, because there’s no point further north (up) in the sky than Polaris, and this new attraction will allegedly have some height associated with it. That said, I would really appreciate the name Orion if for no other reason than the restraints being referred to as “Orion’s Belts.”

The stage is being set for Thursday’s major announcement. #KingsIsland #KI2020 #TEOTWAWKI

Will something emerge from the crater that took out Firehawk and Dinosaur’s Alive? Was it the same crater that created Twisted Timbers at Kings Dominion? 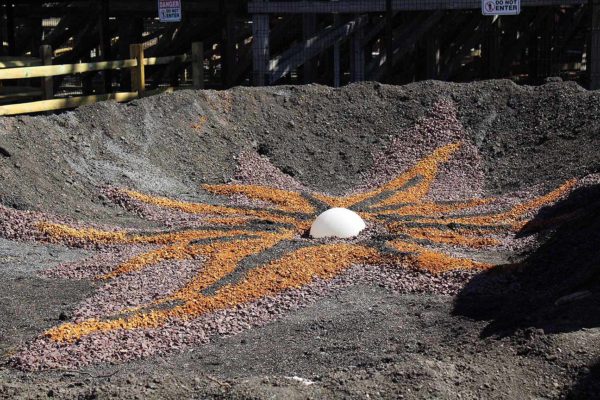 Do all of the Cedar Fair parks exist in one extended universe? Signs point to maybe, and will this new attraction continue the trend? We’re not sure.

One thing is for sure though. With the announcement taking place at 10:00pm on Thursday, we’ll know sooner rather than “crater.”

Last Edit Prior to the Announcement, Maybe:

Really interesting comment below from C101 reader Anna, who noted: Also, R.E.M. played at Polaris in Columbus in June 1995 and “It’s The End Of The World As We Know It” was the final encore. It was an awesome show! https://www.setlist.fm/setlist/rem/1995/polaris-amphitheater-columbus-oh-3d691eb.html. Could be indeed be getting the name Polaris?

And finally, King’s Island has announced their 2020 attraction: Orion! Check out more on the new giga coaster.