We’ve selected 19 of our favorite roller coasters that are celebrating their 20th anniversaries this year, and will profile them every other Thursday for the next several weeks. This week we’ll be heading down to Busch Gardens Tampa Bay to spotlight the former wooden, dueling roller coaster, Gwazi. Gwazi was constructed by Great Coaster International (GCI) at the site of the former Busch Brewery located at the center of the park. The ride opened at the park on June 18, 1999. Below is an excerpt from the official Gwazi press release, courtesy of www.bgthistory.com:

Lurking among the hidden forests of Africa, the mythical Gwazi beast – part lion, part tiger – emerges while caught in a never-ending internal struggle. A battle for supremacy between its two beastly sides is legendary. Now, adventurers from around the globe can experience the power of Gwazi lion and tiger at Busch Gardens Tampa Bay.

Standing 100 feet tall, one of America’s newest and largest double wooden roller coasters tantalizes riders to choose a side before catapulting across 1.5 million board feet of southern yellow pine. In an all-too-fast 2 ½-minute melodrama, guests also are taken through six adrenaline-pumping flyby journeys at a combined speed of 100 mph. Busch Gardens Tampa Bay’s reputation as Florida’s premier adventure park was bolstered even further in Summer 1999 with the opening of this world-class thrill ride. Gwazi’s dueling coasters deliver unrivaled family excitement in a frenzied race to the finish. An African village encompassing Gwazi further immerses guests in the flavor and style that comprises Busch Gardens Tampa Bay. Gwazi boasts nearly 7,000 feet of track, which engages both coasters in six distinctly harrowing “flyby” encounters. The Gwazi Lion and Gwazi Tiger trains generate up to 3.5 G forces and speeds of 50 mph for nearly three minutes as they careen over 15 towering hills and a dozen hard-angle turns. 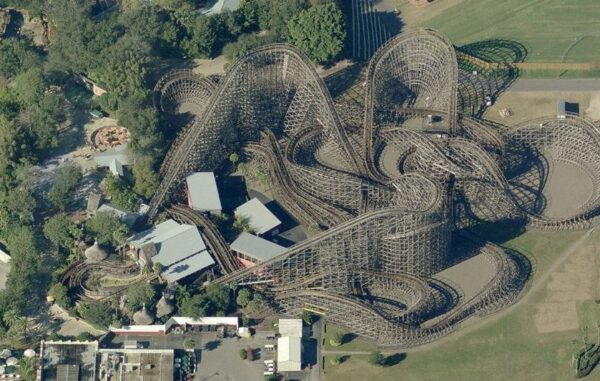 Gwazi was quite unlike most traditional racing wooden roller coasters. Most racing wooden coasters have trains race against each other on parallel “out-and-back” style layouts. However, Gwazi’s dueling twister style layouts focused on having the trains cross each other at six different “fly-by” encounters. The first fly-by actually happened as soon as the trains leave the station, turning and passing by each other, as if accepting each other’s challenge, before climbing lift hills in opposing directions. The remaining fly-bys were not nearly as memorable to me, almost to the point where you forgot the trains were supposed to actually be dueling. There certainly aren’t any signature moments like the near-miss vertical loops of Dueling Dragons.

As far as the layout of the two tracks go, I can’t recall there being any significant differences between the Lion and Tiger sides. Both sides have the same drop height and reach the same top speeds.  Some have described the Tiger side as having tighter turns and quicker slalom-like change of directions. Judge for yourself below: 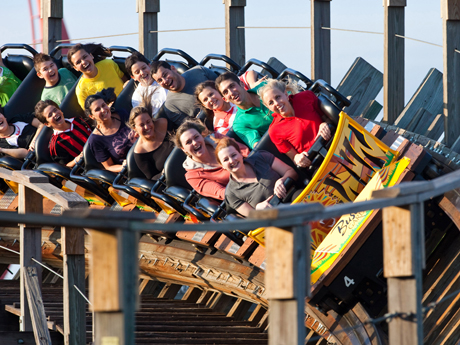 Over the years, Gwazi began to develop a reputation of being a rough coaster. The Lion side of the coaster was eventually re-tracked in 2009, with the Tiger side being re-tracked the following year. In 2011, the ride’s Philadelphia Toboggan Coasters trains were replaced with GCI Millennium Flyer trains. Unfortunately, the upgrades did not do much to help shed Gwazi of its notoriety. Eventually, the Tiger side of Gwazi was closed at the end of 2012 due to low ridership and maintenance issues. In January 2015, Busch Gardens announced that Gwazi would officially close on February 1, 2015.

Afterwards, Gwazi stood Standing But Not Operating for several years. Fans could still get up close and personal with the ride during events held in Gwazi Park such as the Busch Gardens Food and Wine Festival. However, the ride would continue to sit untouched in the middle of the park sort of like a haunted, wooden shell. Its trains were reused for InvadR at Busch Gardens Williamsburg. In March 2019, Busch Gardens Tampa Bay finally announced that Gwazi would be replaced by a record-breaking Rocky Mountain Construction hybrid coaster conversion. 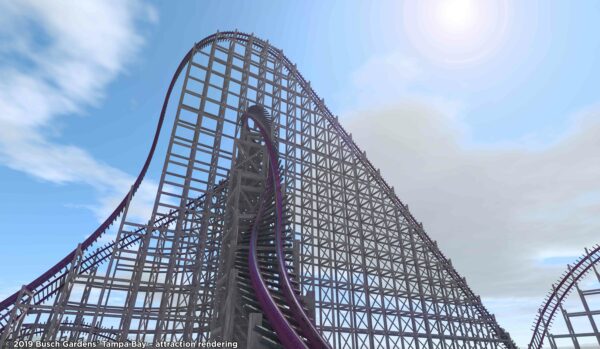 Gwazi was actually the first wooden roller coaster I have ever ridden. In fact, it probably was the first major wooden roller coaster that many Floridians had the chance to experience. The only other wooden rollercoaster I can remember in Florida was the Florida Hurricane at the defunct Boardwalk and Baseball (formerly Circus World), which closed in 1990. Gwazi was also probably my first significant experience with airtime on a coaster. However, Gwazi’s reputation of roughness caused me to think that all wooden coasters were rough. Many Floridians will tell you the same thing. It wasn’t until experiencing the GCI woodie, Terminator Salvation: The Ride (now Apocalypse) at Six Flags Magic Mountain, that I realized how good a wooden coaster can be (apologies to the Dania Beach Hurricane).

If you’re reading this and you’re a Floridian, and Gwazi is the only wooden roller coaster you’ve ever ridden, I implore you to try out some other modern woodies. White Lightning at Fun Spot America in Orlando, and Mine Blower at Fun Spot America in Kissimmee are both absolutely amazing! As for the Gwazi RMC conversion, it probably is my most anticipated coaster of all time. I’ve been bragging to people here in Florida about how great RMC coasters are and cannot wait for us to get one of our own, let alone a world record breaking one!

“19 for ’99” continues in two weeks as we look back on another of our favorite coasters!