Review: Carowinds’ Taste of the Carolinas

I did a lot of different things at Carowinds in 2015, but one of my major regrets from last year was missing the park’s inaugural “Taste of the Carolinas” Food Festival. After rave reviews from last year’s event, I knew that I wasn’t going to make that mistake again in 2016. 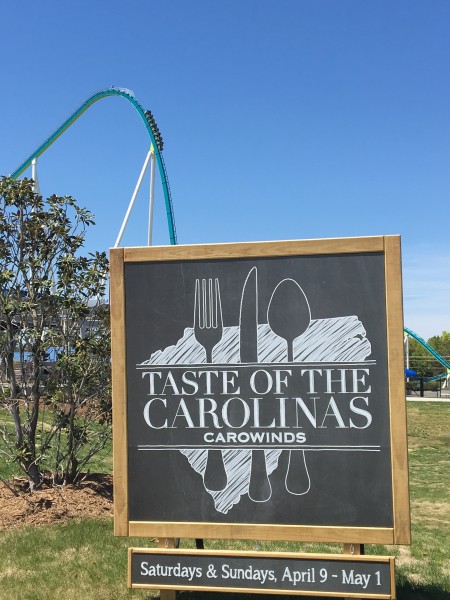 Carowinds often brands itself as “where the Carolinas come together.” In showcasing cuisine from seven unique regions in North and South Carolina with “Taste of the Carolinas,” Carowinds’ Executive Chef Kris Suita and his culinary team are able to give even more meaning to the park’s slogan.

In somewhat of a last minute decision, I decided to make the two hour drive west and get to Carowinds around lunch time to fully experience the festival. Each of the booths was located in front of Harmony Hall, near the entrance of Planet Snoopy.

What I found unique about “Taste of the Carolinas” was the fact that exactly zero of the seven food booths and two drink booths accepted cash or credit. You had to buy wooden “Taste Tokens,” and pay for each item at the booths with the tokens. 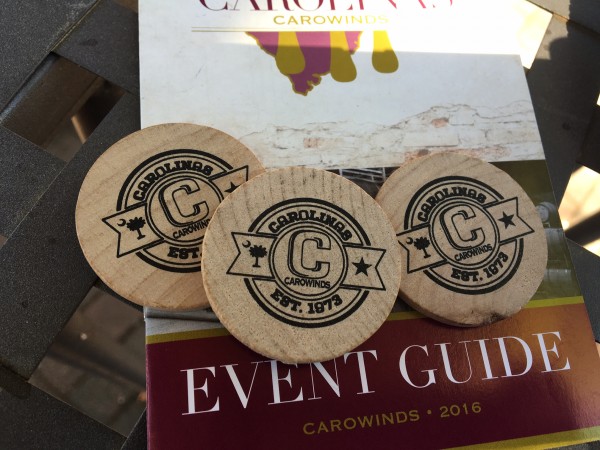 For those with concerns about the price vs. portion, The last time I visited Carowinds, I had a brisket sandwich, macaroni & cheese and a soft drink for lunch at Harmony Hall. After my season pass discount, it was just about $17. For the variety of available menu options and portion size, I feel that the tokens are actually a really good value.

Tokens in hand, it was time to eat. First stop, one of my personal North Carolina Favorites, Lexington BBQ. 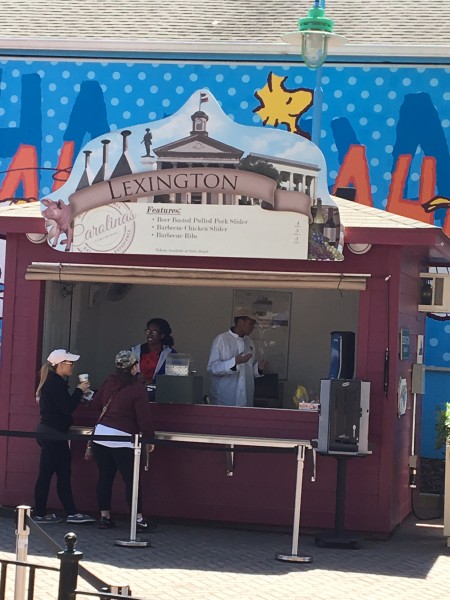 Menu Items (My Choice in Bold) 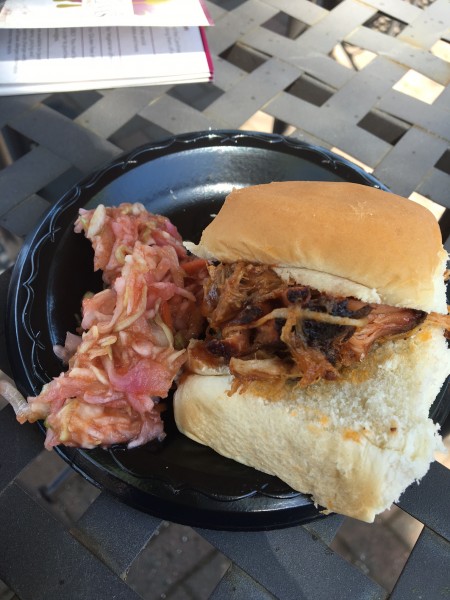 Living in North Carolina, there’s a definite allegiance you have to pick when it comes to barbecue, or simply “‘cue” in many parts of the state. You’re either on the vinegar-based eastern side, or the tomato-based western side. Living in a relatively central part of the state, I tend to sit on the barbecue fence, but do lean slightly to the left and the tomato-based sauce. The Beer Basted Pulled Pork Slider had a great flavor, and was accompanied by a small serving of “red” slaw, which I asked for on the side. I’m not usually a fan of the ketchup-based version of cole-slaw, but the Carowinds version had a tangy taste that was perfect compliment to the flavor of the slider.

For my second course, I headed Southeast from Lexington, NC to Charleston, SC. 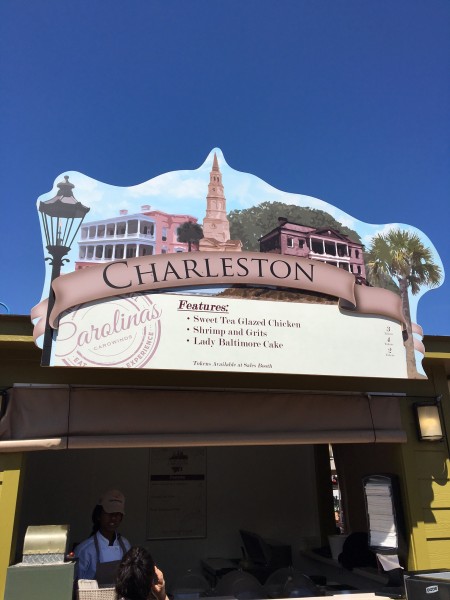 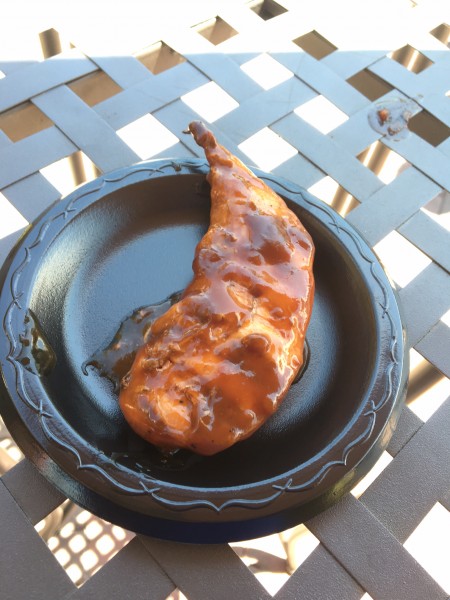 I’ve never thought of southern staple Sweet Tea to be anything more than that — a glass of tea. When I saw it used as a glaze on the menu at the Charleston booth, I knew I had to try it. The piece of grilled chicken was tender and moist, and the Sweet Tea glaze proved to be a very interesting, though very tasty, topping for the chicken. At 3 tokens, it was one of the better values of the day, and one of the more adventurous items I tried.

After two “entrees,” it was time for a side dish of sorts. I  traveled from the southeast in Charleston to the Northwest corner of South Carolina, the Upstate region. 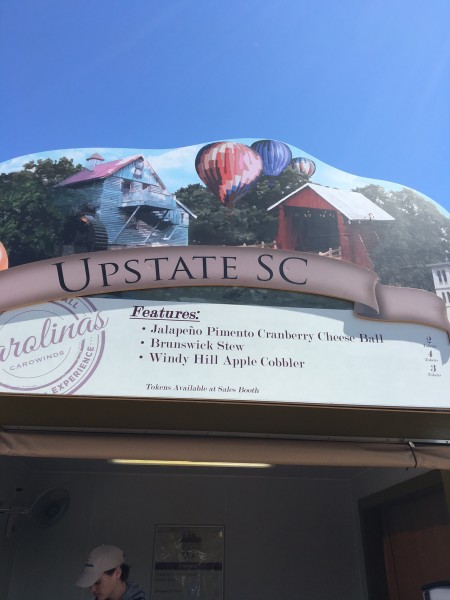 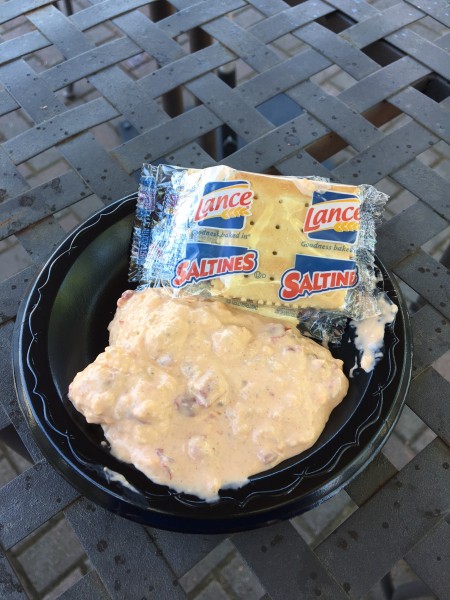 It was Masters Sunday in the golfing world, and because I wasn’t at Augusta National eating one of their famous Pimento Cheese sandwiches, I wanted to try the Upstate South Carolina version. For two tokens, I received a huge scoop of Pimento Cheese and some saltines. And by huge, I mean I needed to track down a spoon to eat the rest of the pimento cheese, because the six crackers weren’t enough. One thing I learned about this dish was to not underestimate the word “jalapeno.” It wasn’t an overpowering flavor, but there was definitely a “kick” to this pimento cheese.

I needed to cool down, so it was time for an adult beverage from one of the two beer stations at “Taste of the Carolinas.” 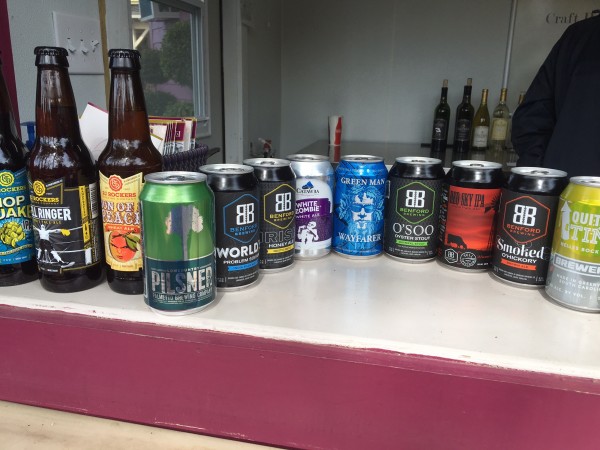 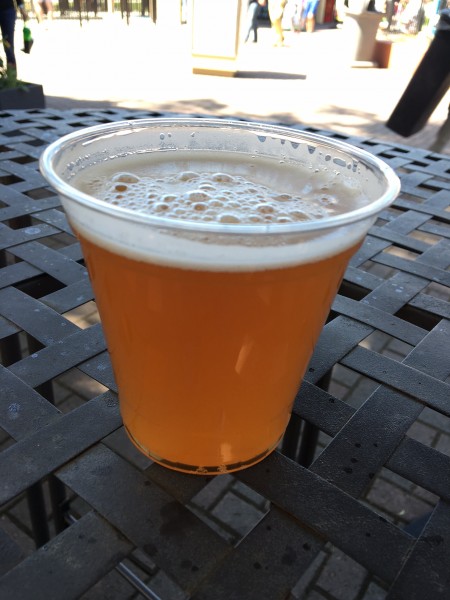 Featuring craft beers from both North and South Carolina breweries, each beer was 4 tokens. I had never tried any of the 13 varieties of beer available, and picked SC Brewery RJ Rocker’s “Son of a Peach.” As far a fruit flavored beers go, it was really good, and went down very smooth. A really good summer beverage for those over 21. I’ll probably be picking up some at my local grocery store soon.

I continued my culinary expedition by re-entering North Carolina and heading to the coast, eager to enjoy some seafood from The Outer Banks. 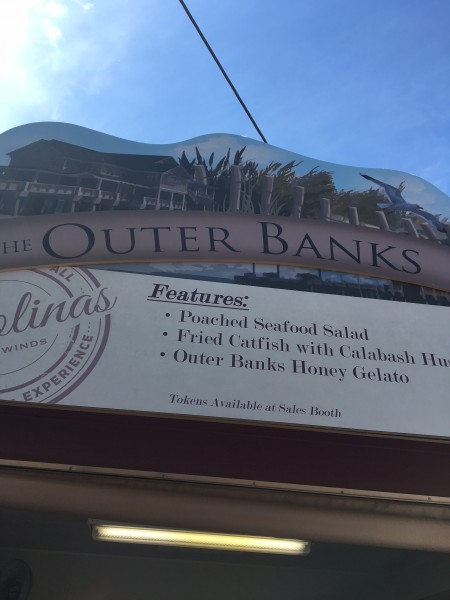 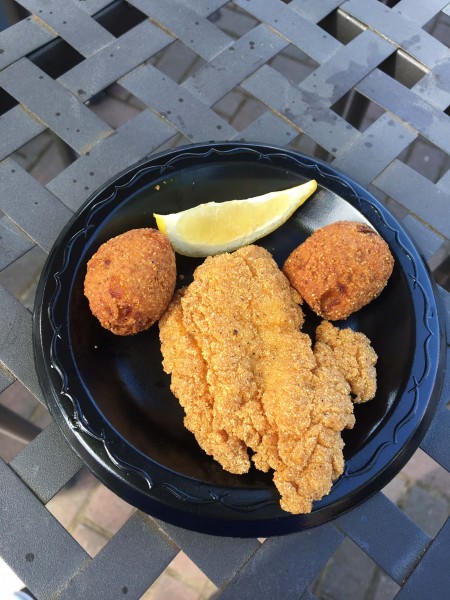 The Outer Banks of North Carolina are known for their fried seafood, and this fried catfish was pretty good, and I’m not usually a fan of seafood. The star of this plate to me was the two Calabash hushpuppies, which had a great texture and flavor.

I had four tokens left, and I tried to split them up accordingly. My next stop was for a side dish for my catfish at the SC BBQ Region Stand. 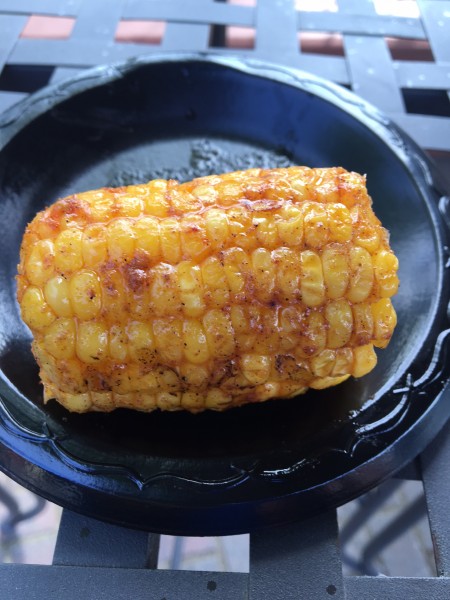 I mentioned earlier that barbecue is something that North Carolinians take very seriously. That said, I can’t get behind South Carolina’s mustard-based barbecue sauce. But, I wanted to try something from the SC BBQ Booth, so I went with the Roasted Corn. It was a standard smaller-sized piece of corn, but with the BBQ seasoning and butter flavors co-mingling on the corn, this “taste” had one of my favorite flavors of anything I tried at “Taste of the Carolinas.”

It was time for dessert, and with only 2 Tokens remaining, my options were limited. Luckily, I saved the best for last as I headed to the Asheville Mountains booth. 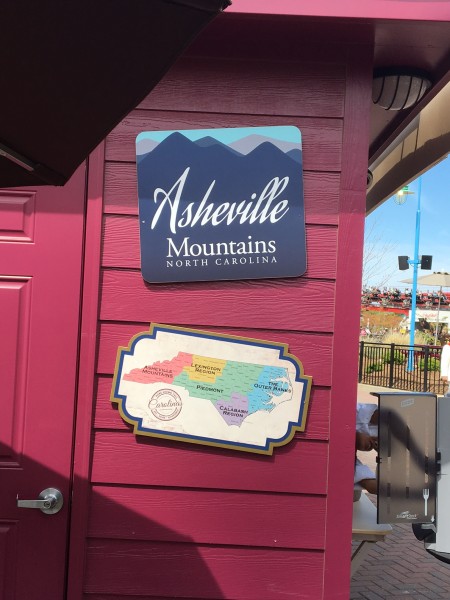 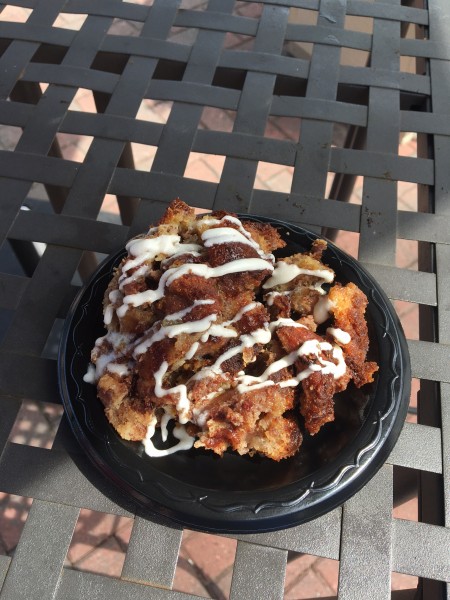 The Pecan Cinnamon Bread Pudding was in a word, amazing. I love anything with cream cheese icing, and this warm bread pudding and icing were a match made in heaven. It had the perfect level of sweetness and was a HUGE portion for only 2 tokens. By far the best value of anything I ordered at “Taste of the Carolinas.” I can not recommend this item enough. If you go to Taste of the Carolinas and enjoy things that are delicious, go buy this.

I was officially out of tokens, and more importantly, full when I finished my bread pudding. I felt my $24 was money well spent. Unfortunately, I had to skip the last booth at Taste of the Carolinas, Lowcountry, SC. 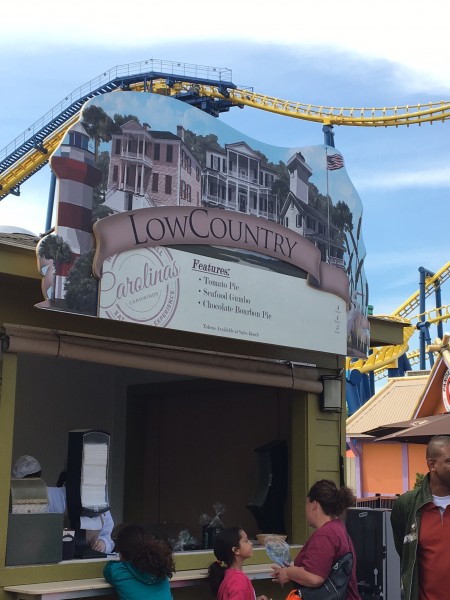 If I had ordered here, I would have gone with the Tomato Pie. Both it and the Seafood Gumbo were receiving rave reviews on Social Media.

The Seafood Gumbo and Tomato Pie are awesome at the @Carowinds #TasteCarolina ! We will have seconds! pic.twitter.com/7sK3L4oDeI 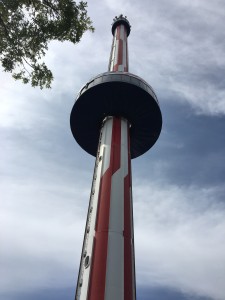 After I was done stuffing my face with Carolinas cuisine, I took a few laps around Carowinds (to burn off calories as well as fight off the urge to curl into a ball and take a nap after all the food I had just eaten), and rode a few of the less intense rides at Carowinds — Carolina Skytower and Plants vs. Zombies, 3Z Arena. (I wasn’t trying to play the guessing game of “how much bread pudding is too much bread pudding to eat before riding Fury 325.”) 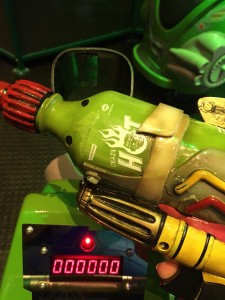 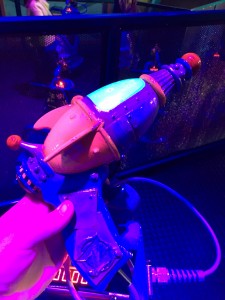 On a quick Plants vs. Zombies note, while the ride is still in “beta testing” mode, the ride experience has already significantly improved since Media Day for the attraction. I love the re-ride factor, because every time, you’re in a different seat with a different vantage point. It’s a blast. By my third time through, I was able to be the high scorer on the Zombies side with 20,300 points, albeit in a losing effort. 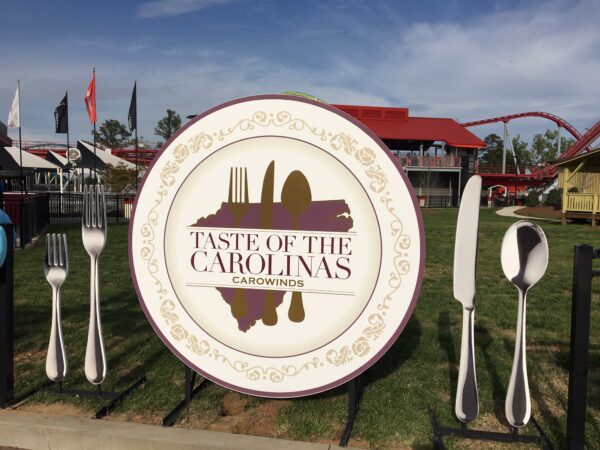 “Taste of the Carolinas” also features live music on the Harmony Hall outdoor stage, and culinary demonstrations from national and regional chefs. Food Network Chef Damaris Phillips kicked off the event on Saturday, and Charlotte-area chef Alyssa Gorelick gave two demonstrations on Sunday. Chef Alyssa will return on April 16 and April 30, while Chef Jason “Jay Z” Ziobrowski, Corporate Chef, Eastern Region for InHarvest will appear April 17, April 23, and May 1. The demonstrations take place at 1:00pm and 4:00pm inside of Harmony Hall.

(To check out some of the recipes the chefs use in their demonstrations, click here!)

I won’t be able to make it back this year, but I’m already looking forward to next year’s event! Great job Chef Kris and all of the Carowinds Culinary team!