Which Park Can Stake Claim to “B&M Capital of the World?”

With SeaWorld Orlando’s recent announcement of Pipeline: The Surf Coaster, it will now give the park four roller coasters from the esteemed Swiss ride manufacturers Bolliger & Mabillard. In a piece of concept art, you could see all four of SeaWorld’s B&M creations — the floorless Kraken, the flying Manta, the hyper Mako, as well as the first-of-its kind Surf Coaster, which, of course, got fans to speculating… 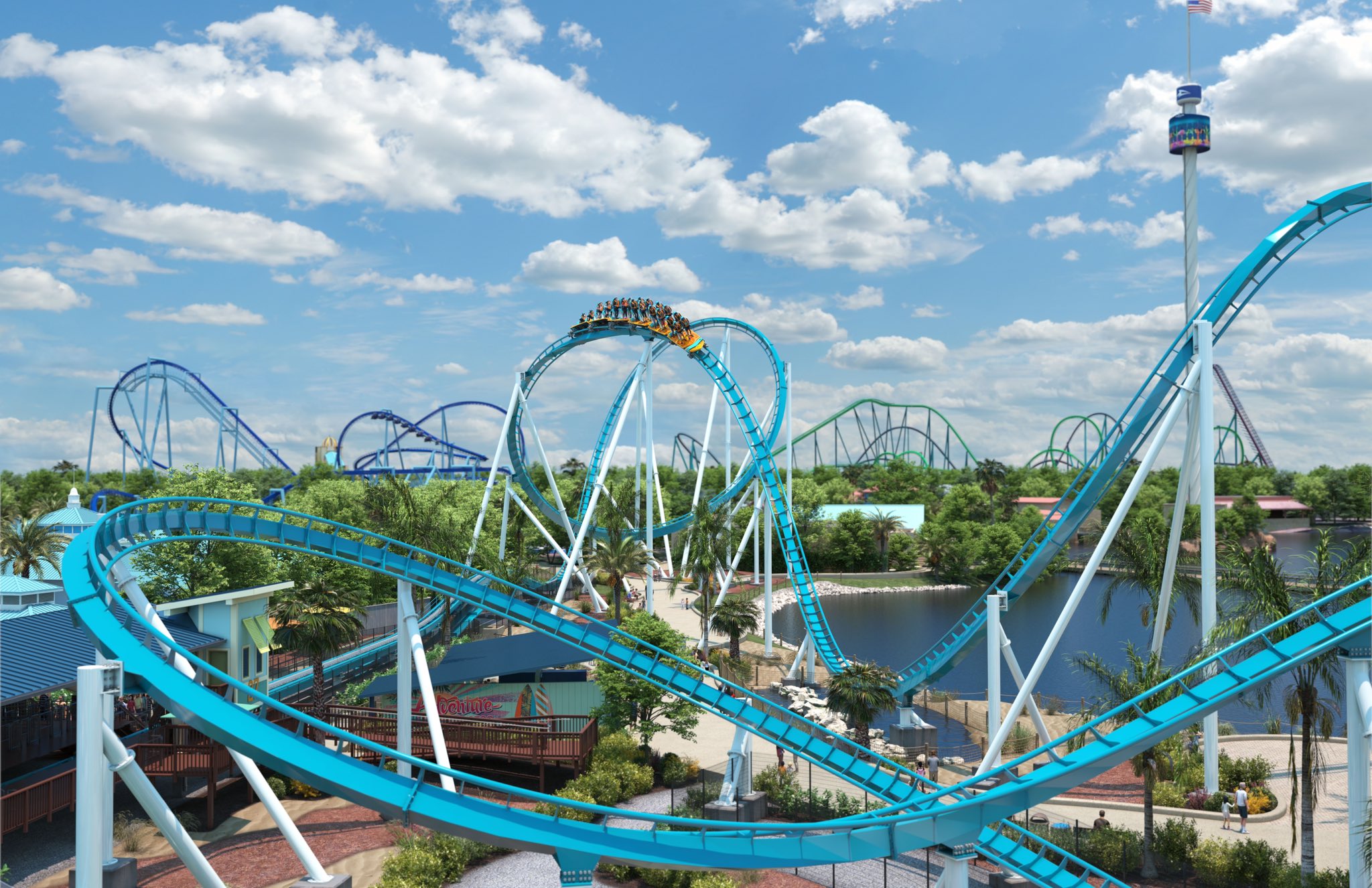 Which park has the record for most B&M track? and by extension, which park can claim to be the “B&M Coaster Capital of the World?”

Luckily, we’ve done the math for you. When staking claim to such a prestigious title that we definitely didn’t just make up for the purposes of this article, the main factors taken into consideration were a) having at least three roller coasters from Bolliger & Mabillard in the park, and b) the collective length of those roller coasters. Ride experience wasn’t a factor, because as we all know, that’s extremely subjective.

(Also, while there haven’t been a ton of B&M coasters that have been removed, we’re ranking parks based on coaster count as of 2023. If you’re curious, Universal’s Islands of Adventure, in the days of Dueling Dragons, because I won’t acknowledge other names the coaster has had, would have ranked 12th on this list.)

Without further adieu, here are the contenders, and eventual champion of “B&M Coaster Capital” – listed in reverse order to effectively build the suspense. 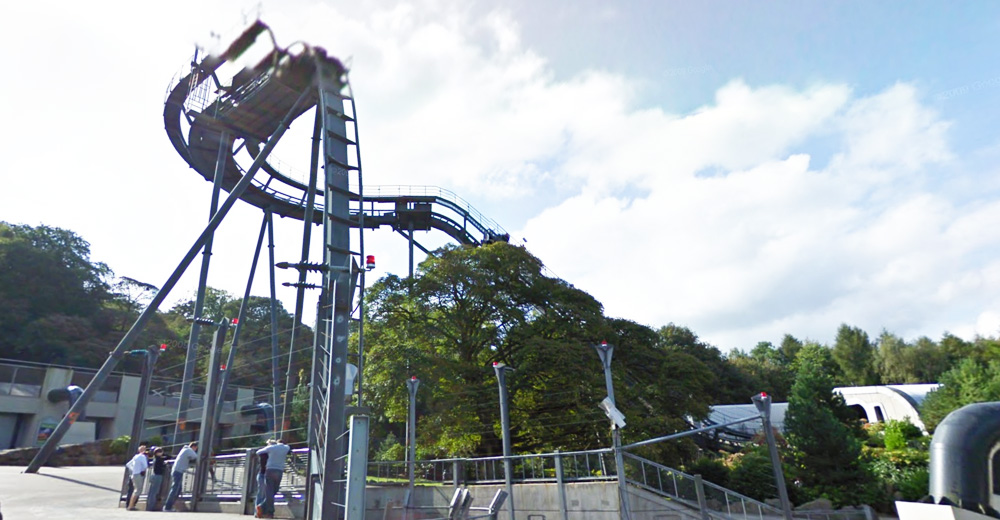 With no new B&M’s installed at Alton Towers since 2002, it would make sense that the park would be the owner of some of the earlier, shorter B&M models, which puts it at the bottom of the list. Fun fact: If you lined up every piece of track of Alton Towers’ three iconic B&M coasters, they would still be shorter than Fury 325 at Carowinds by just about the length of a football field. 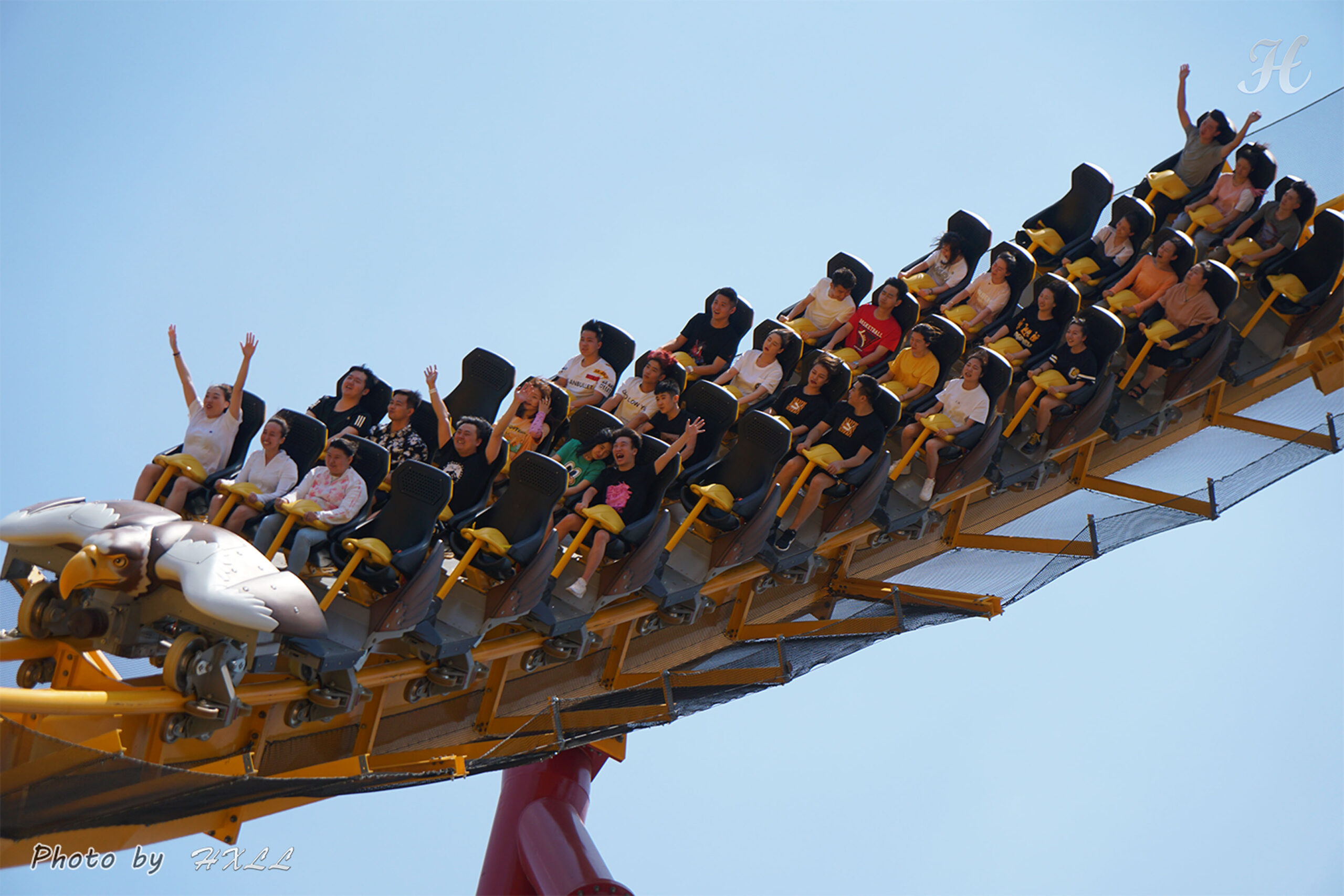 There are multiple Happy Valley parks in China, but this particular location, located in the Chaoyang province of Beijing, is the only one to feature three B&M coasters, including Crystal Wing, a Superman: Ultimate Flight clone. There’s also a non-zero chance that we extended this overall list so it would include Happy Valley Chaoyang just to mention the Flight of the Himalayan Eagle Music Coaster, which is certainly a mouthful to say out loud, but looks amazing when written out. 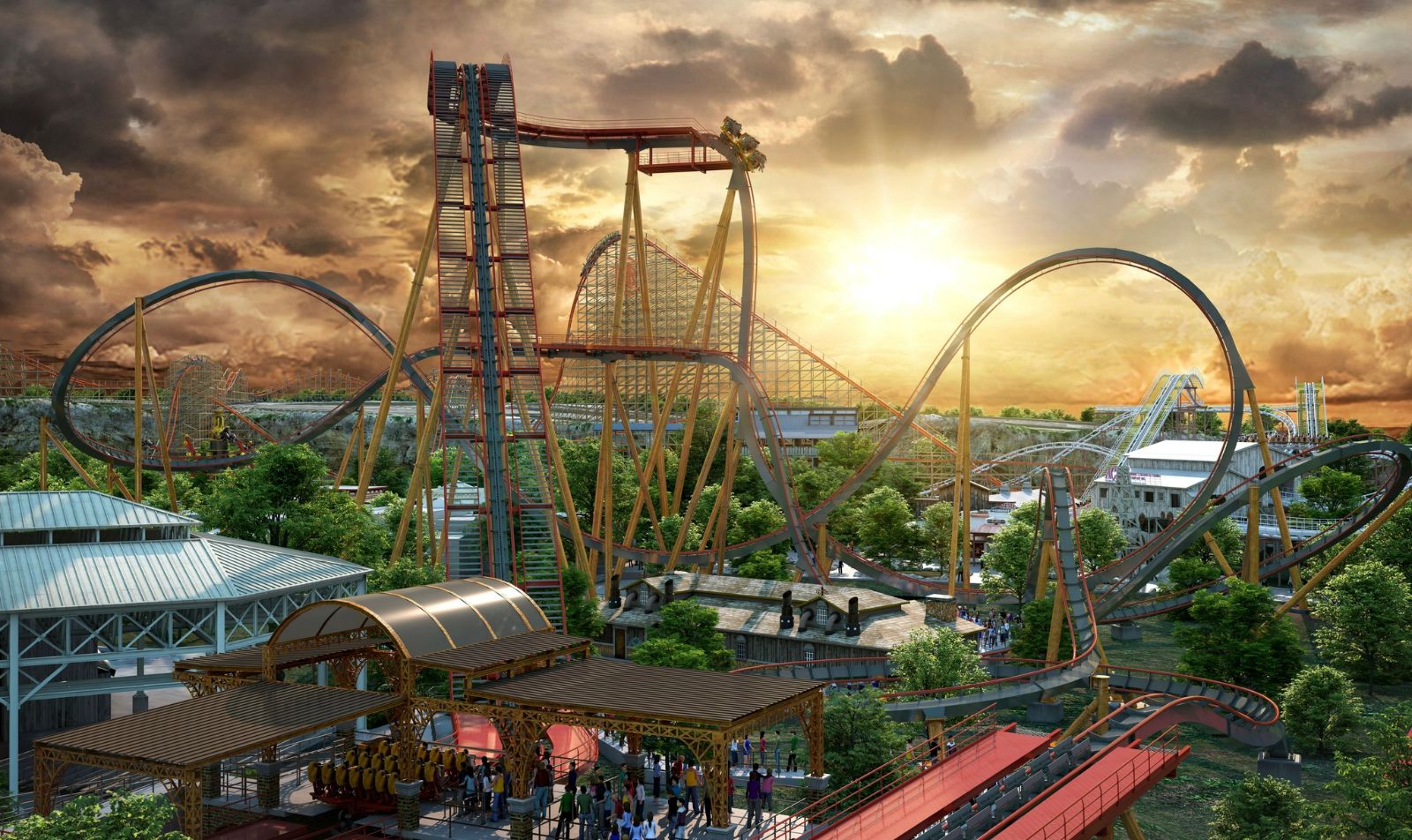 Busch Gardens Tampa has arguably two of the most iconic B&M roller coasters of the 1990s with Kumba (1993) and Montu (1996). With the addition of SheiKra in 2005, it gave the park a formidable trio of B&M coasters, but they are slightly outranked on this list by another park with the same name, and their own legendary B&M trio… 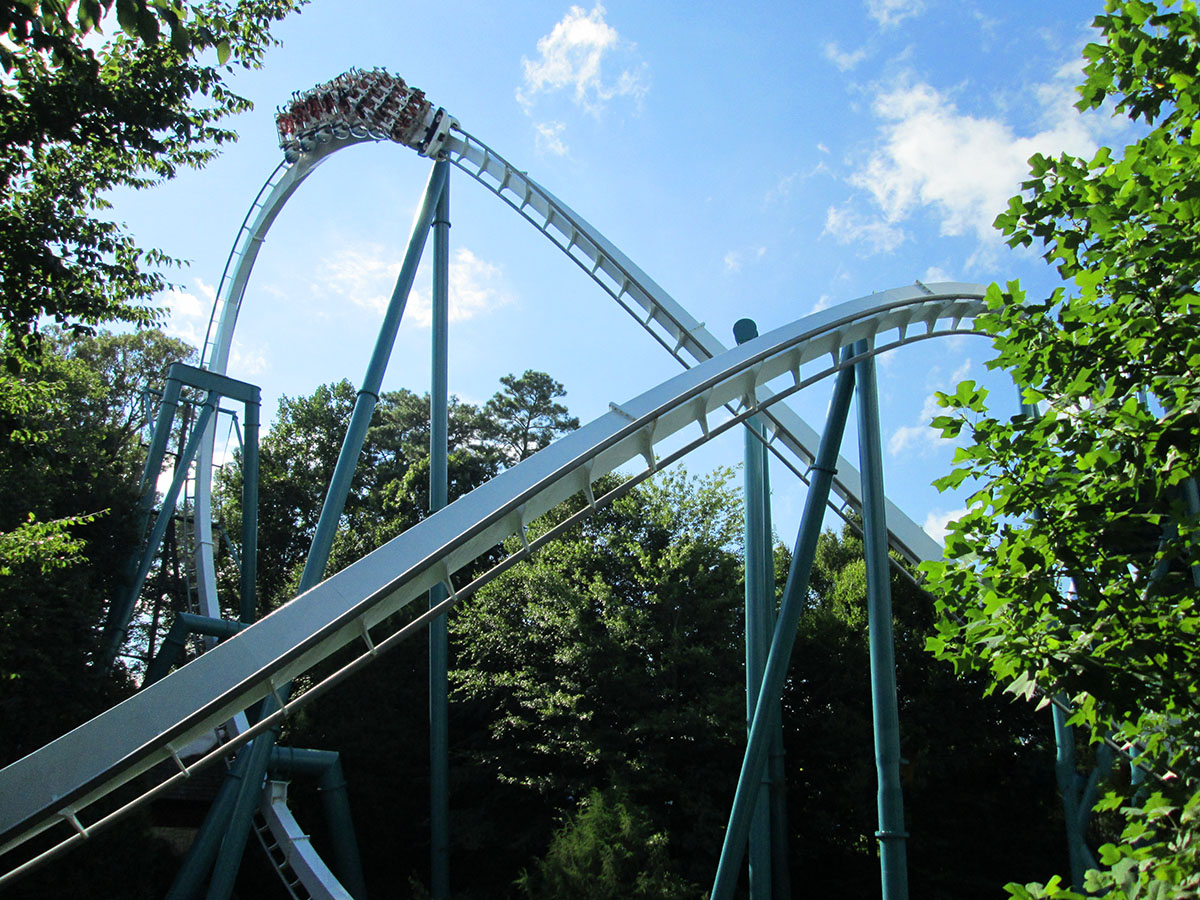 Montu may be longer than Alpengeist by 150 feet, and SheiKra might have Griffon beat by 80 feet (even though Griffon is taller by 5 feet), but with B&M’s first-ever hyper coaster, Apollo’s Chariot outpacing Kumba by just about 900 feet, Busch Gardens Williamsburg can *technically* say they’ve got a more extensive collection of roller coasters from Bolliger & Mabillard. 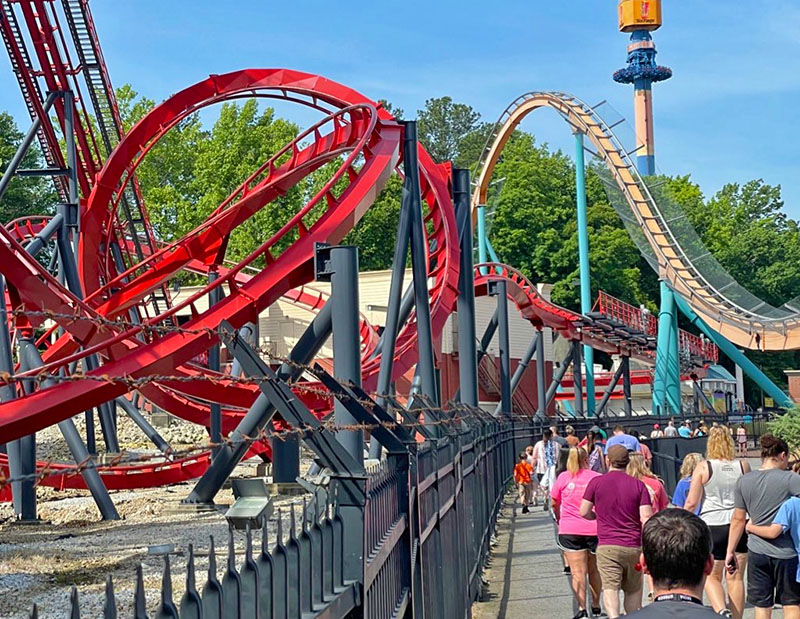 We’re getting into the real contenders now, with parks that have four coasters from B&M. However, while four coasters is a very impressive number, outside of the Goliath hyper, none of Six Flags Over Georgia’s other three coasters are particularly long. (Though we could argue that 3,000′ on an “OG” stand-up coaster could feel like a very long time, even though Georgia Scorcher has a pretty good reputation compared to other stand-ups.) 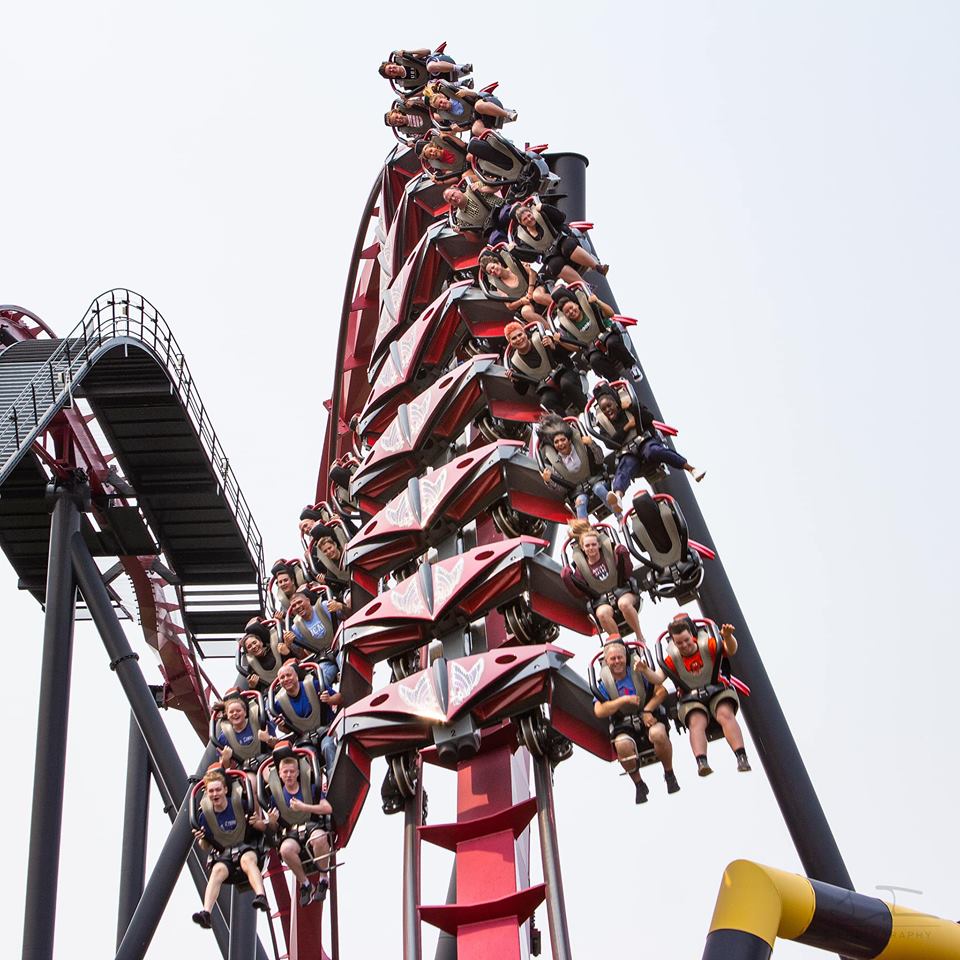 Have you ever stopped and thought that Six Flags Great America and Six Flags Over Georgia have similar B&M coaster line-ups, at least when it comes to ride length? The only difference in these two are the ~600′ of difference between Raging Bull and Goliath, both hypers. Otherwise you’ve got an atypical coaster model that’s 3,000′ long, a Superman flying clone, and a Batman clone.

It’s worth noting that if Iron Wolf, better known (at least to me) as Richie Rich’s Roller Coaster still existed at Six Flags Great America, they would bump up to third on this list. 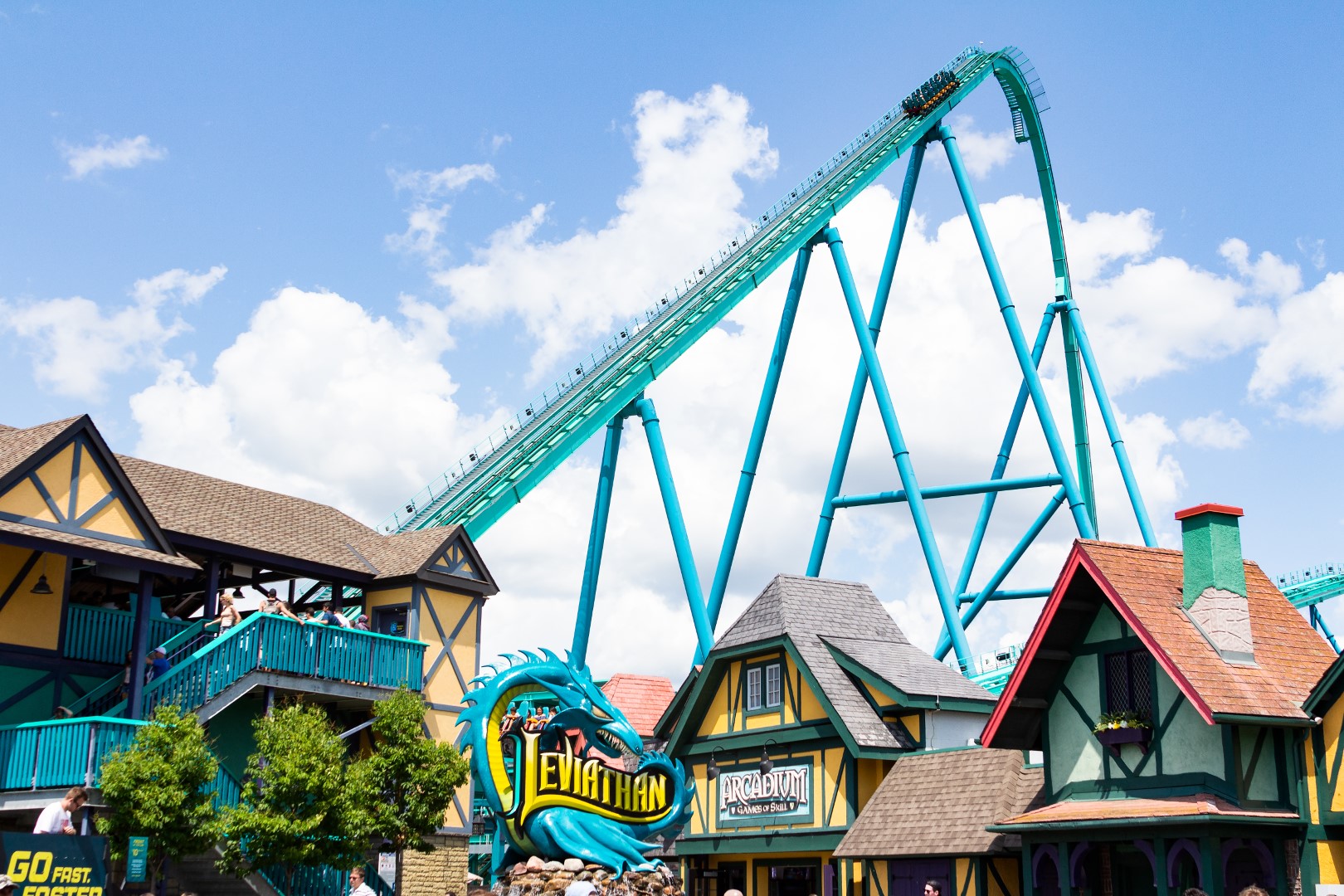 One of only three parks in the world containing two B&M coasters with more than a mile’s worth of track, Canada’s Wonderland holds the distinction as the park with the first B&M giga coaster in Leviathan, and added Yukon Striker, the world’s tallest, fastest, and longest dive coaster from B&M, in 2019. 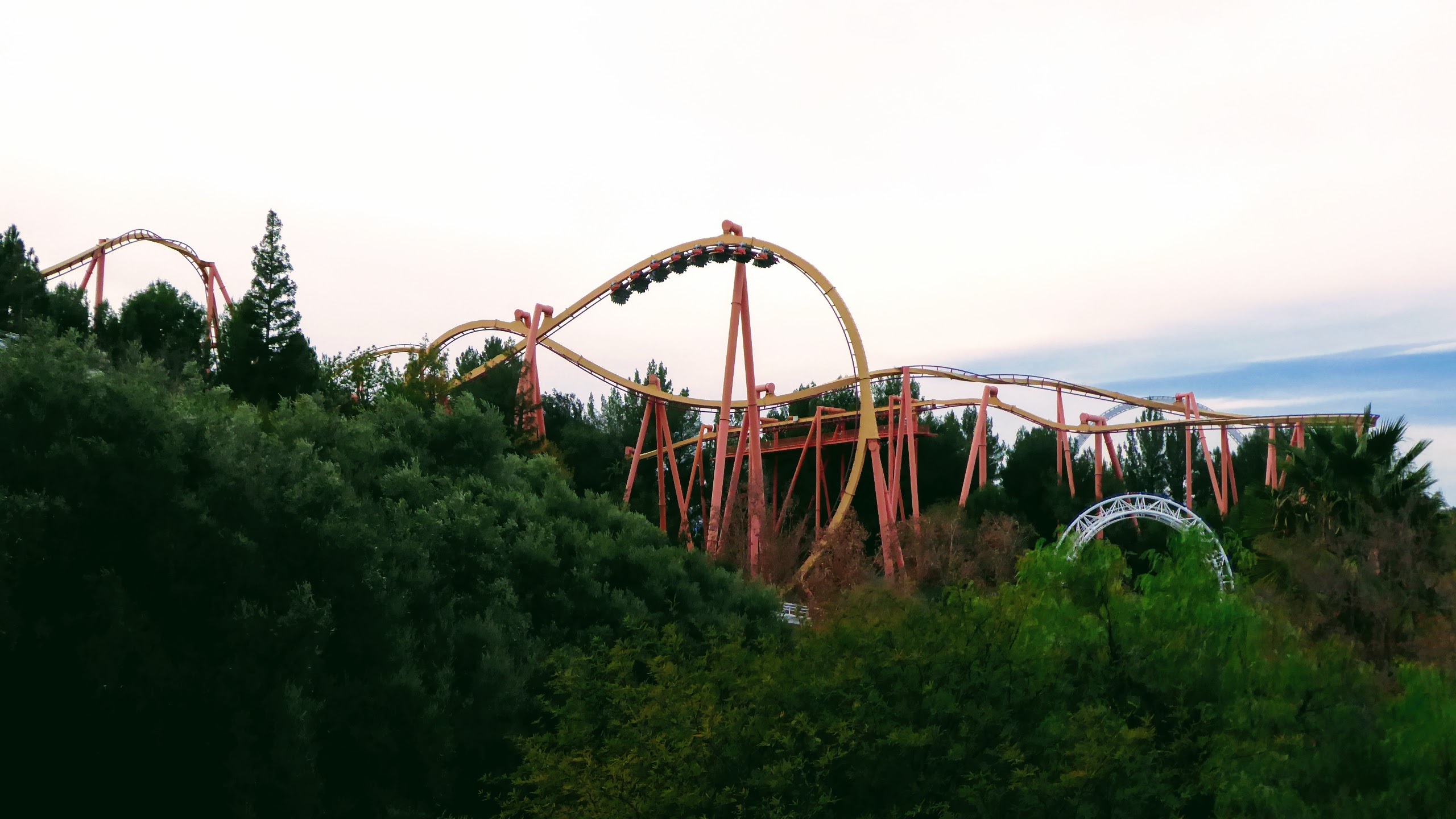 Outmeasuring Six Flags Great America by 1,100′ of track, Six Flags Magic Mountain ranks highly on this list largely in part to its three custom coaster models — the Riddler’s Revenge stand-up, the floorless Scream! and the iconic flying coaster Tatsu, often considered one of the best B&M flyers in the world. Like other Six Flags parks on this list, they also have a Batman clone.

There’s often a debate about quantity vs. quality of roller coasters at various parks around the world. While Kings Island only has three B&M roller coasters, they’re the only park in the world to have three B&M’s with a track length of at least 4,000′ long, which ranks them in the top five parks that can stake claim to being the B&M capital of the world. 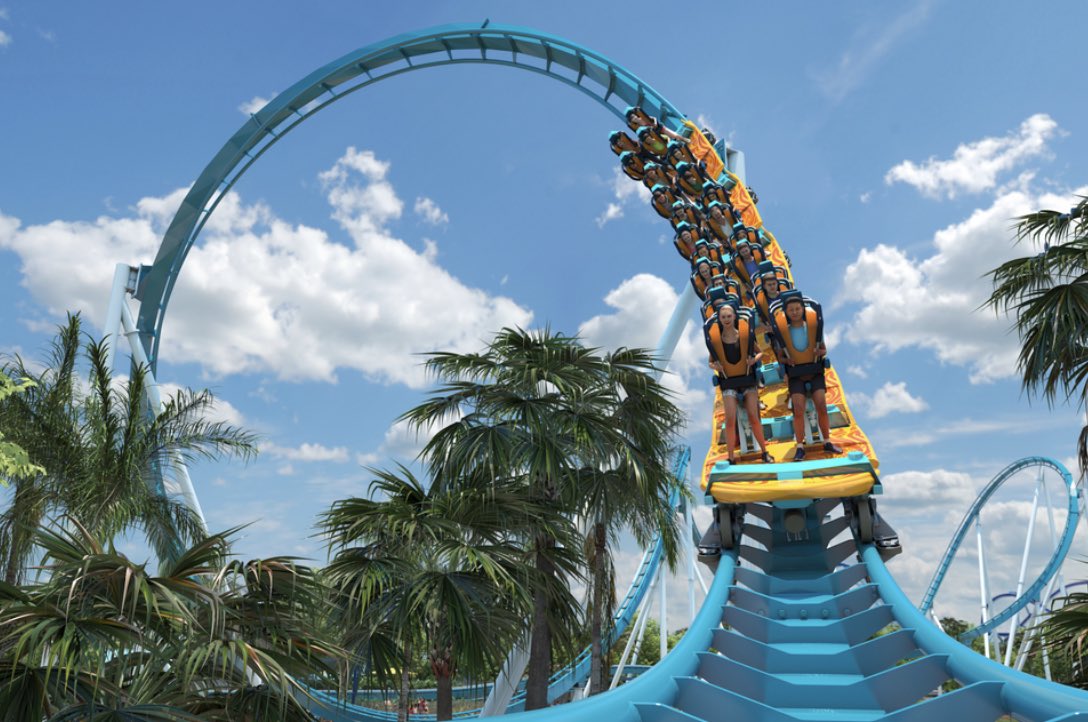 It’s wild what a new addition can do. With SeaWorld’s recent announcement of the first-of-its-kind B&M Surf Coaster, Pipeline, the park jumps from 10th on this list to fourth, firmly cementing the park’s status as “Coaster Capital of Orlando,” as well as “B&M Capital” of SeaWorld Parks and Entertainment (though they technically already had that honor prior to Pipeline, with slightly more track than both Busch Gardens parks!) 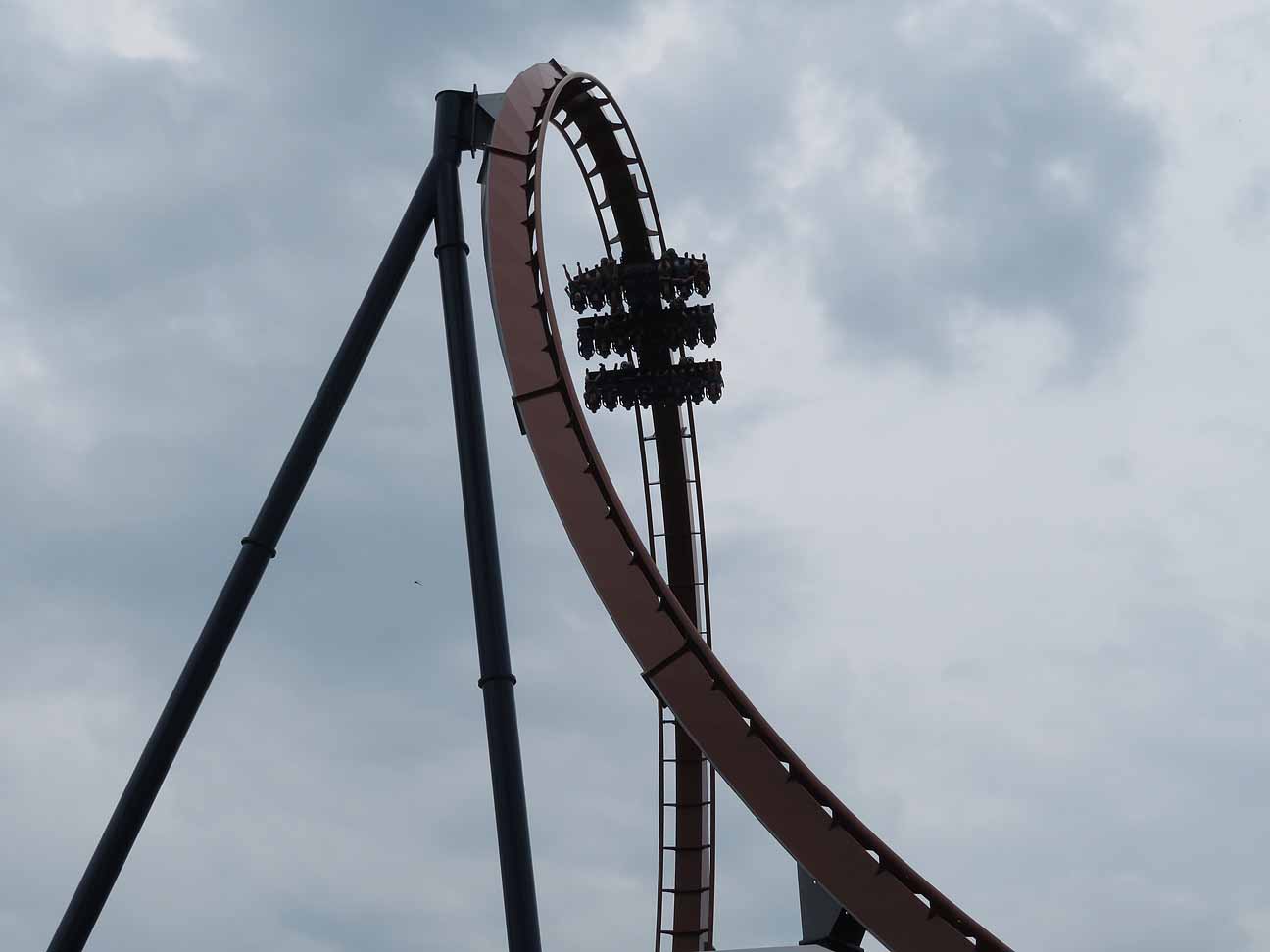 Just edging out SeaWorld Orlando, America’s “rockin’ roller coast,” Cedar Point has four great B&Ms of its own – a wing coaster in Gatekeeper, an invert with Raptor, the stand-up turned floorless Rougarou, and the only dive coaster to feature an Easter egg where the track spells the name of the state it’s in, Valravn. That said, they also have four non-B&M roller coasters that are longer than their longest B&M. (Millennium Force, Steel Vengeance, Magnum XL-200, and Maverick.) 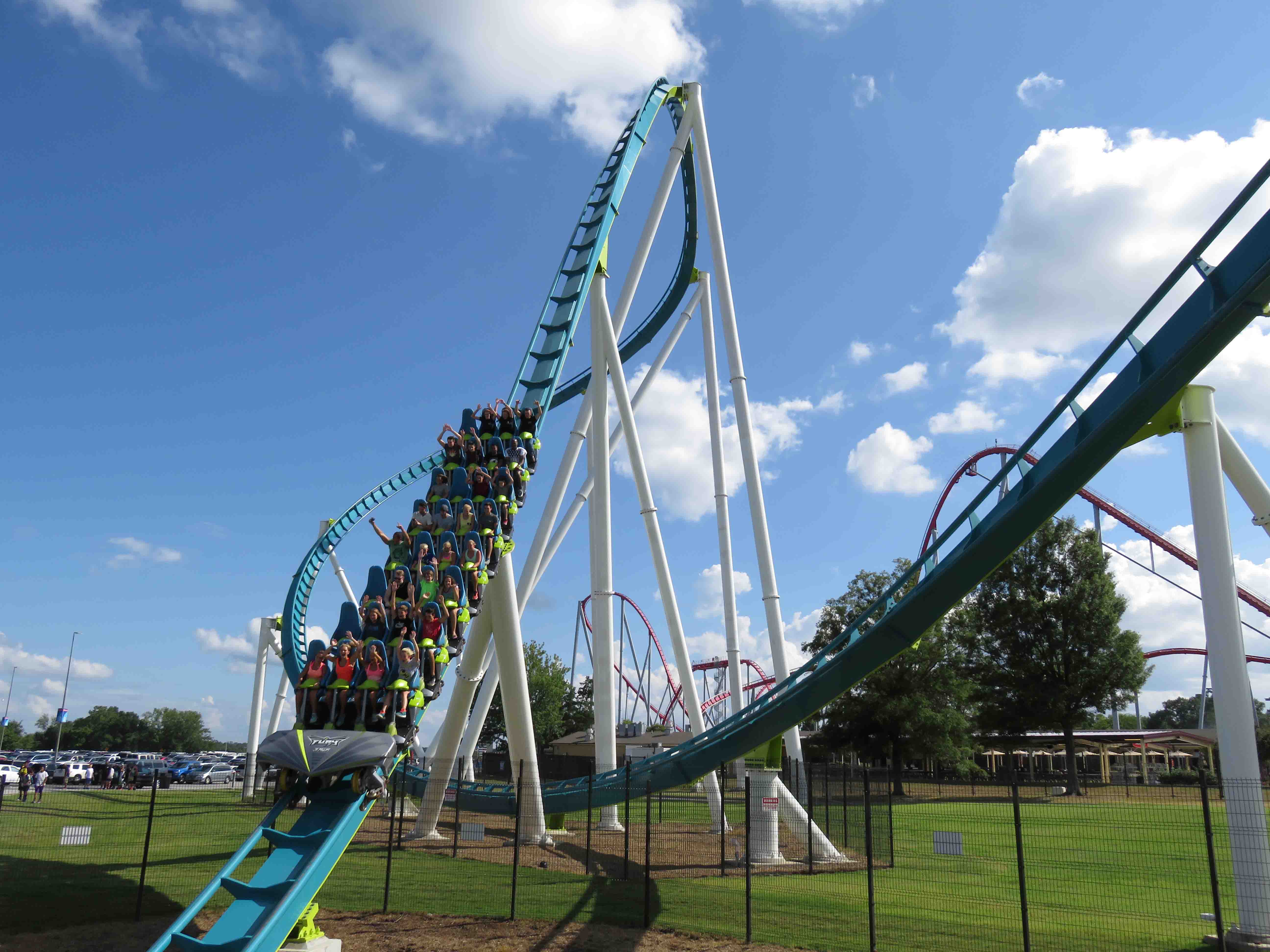 Before we compiled this list, Carowinds was our guess for the park that had the most B&M track. It’s got the longest and sixth-longest B&M coasters in existence with Fury 325 and Intimidator flanking the perimeter of the park, on top of a very solid (albeit compact) invert in Afterburn, and one of B&M’s oldest operating coasters in Vortex. Unfortunately, our guess was off by a few thousand feet. 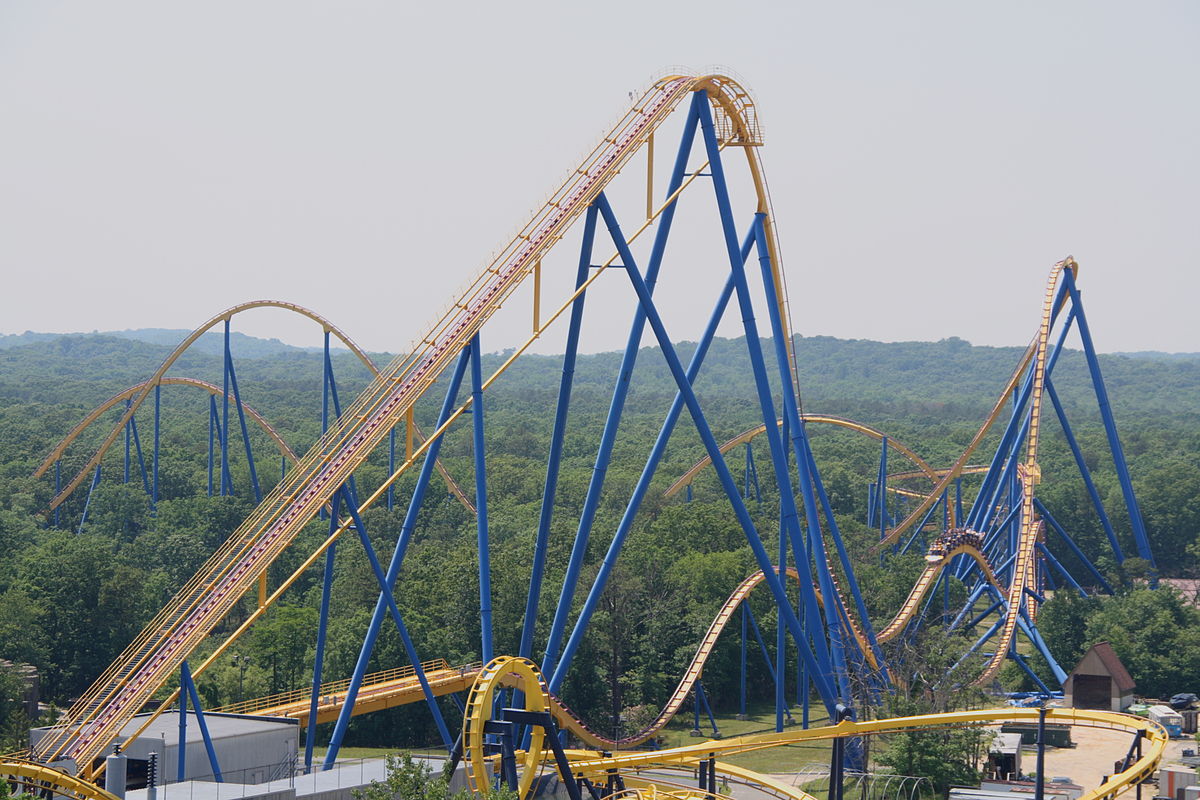 Remember that quantity vs. quality argument that we talked about a little bit ago? With five B&M coasters, Six Flags Great Adventure in New Jersey has more operating B&M coasters than any other park in the world. As such, they’ve got the most amount of B&M track at nearly 19,000′, and can stake claim to the highly prestigious honor of “B&M Coaster Capital of the World.” (But hey, Nitro, Green Lantern and Medusa are no slouch rides, so the title is well deserved!)

Subjectively, which park do you think has the best B&M line-up? Does Six Flags Great America deserve to wear the crown? Be sure to let us know in the comments below!

(A big thank you to @TheChainLift on twitter for sending us down this rabbit hole!)