In the race to build even more thrilling and unpredictable ride experiences, the RoboCoaster has emerged as one of the most dynamic ride systems out there. From stationary rides to state-of-the-art motion base attractions, RoboCoaster is raising the level of excitement. Let’s take a look at the brief history of the RoboCoaster and its existing attractions.

Robotic arms have been used in manufacturing since the 1970s and are essential in automotive assembly lines today (seen in the video below). Robotic arms are composed of several segments connected by joints. They’re designed to mimic the motion of a human arm. Individual step motors are connected to each joint allowing each segment to move or rotate independently of the segment it is attached to. Step motors move in exact increments allowing the computer to move the arm very precisely, repeating exactly the same movement over and over again. The robot uses motion sensors to make sure it moves just the right amount. Most robotic arms have six degrees of freedom, meaning it can pivot or move in six different ways (a human arm has seven degrees of freedom).

The RoboCoaster system was first developed in the year 2000 by Gino De-Gol when the idea was hatched to mount a chair to the end of an industrial robotic arm (and the original patent can be seen here). 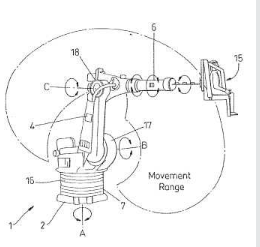 The first G1 RoboCoasters in America were installed at Legoland California. Knights Tournament opened in 2005 and allowed riders to choose how intense their ride was. The attraction consisted of six stationary arms only holding two passengers at a time, resulting in a very low theoretical hourly ride capacity (THRC).

A similar ride, the Sum of All Thrills, opened at Epcot in October 2009. Guests design their own thrill ride using an interactive touch screen then ride their creation via the stationary RoboCoaster.

Universal Creative approached RoboCoaster in 2006 with interest of building a state-of-the-art attraction based off of the G2 RoboCoaster system. Several concepts were pitched around and Universal was so impressed by the potential of this revolutionary ride system that they signed an exclusive sales and development agreement for ten years in March of 2007 (before the deal with Harry Potter author JK Rowling was announced). The first attraction to use the technology was going to be themed to Van Helsing and located at Islands of Adventure.

When Universal secured the rights to Harry Potter they planned to capitalize on it immediately with a new land and headlining attraction. One of the goals of the new ride would be to recreate the feeling of flying. “How are you going to fly with Harry Potter?” asked Universal Creative head Mark Woodbury. “What technology would be employed that would give us the variety of experience we wanted to create in one single ride?” The answer was the RoboCoaster and Harry Potter and the Forbidden Journey was the result.

Each “Enchanted Bench” ride vehicle (RV) is composed of a robotic arm mounted to a “transport” robot. The KUKA made robotic arms are four-axis, meaning they have four degrees of freedom in addition to the forward movement along the track. All these freedoms of motion allow the designers the ability to program the ride to replicate the sensations of flying, including swoops, dives, banked turns, stops, and fast starts.

To insure the illusion of flight isn’t spoiled, all of this technology and mechanical components are completely hidden from the view. The seats themselves ride over ten feet above the floor of the attraction. Even during boarding and disembarking in the load and unload areas the mechanics are hidden from view by angled mirrors. If you’re really curious in seeing the vehicles in motion, there are a couple of areas of the ride that can offer you short glimpses at the vehicle ahead or behind you if you lean forward and look to the left or right. This gives reason for experiencing the attraction at least twice: once to watch the show elements and follow the storyline and another to try and figure out how it works!

Although the system is called a RoboCoaster it is not actually a roller coaster at all: the vehicles do not run on tubular steel rails, it does not rely on gravity, and the  track doesn’t  go up and down hills or even change elevation. The robotic arm’s transport follows a guideway while the motors on the robotic arm receive power by way of a busbar (a strip of metal that conducts electricity) mounted in the center of the ride track.

As far as the future goes, it’s easy to see even more G1 systems appearing not only at theme parks but other entertainment centers and even shopping malls all over the world. In the near future there will be a total of three G2 systems operating when Forbidden Journey rides open in Hollywood and Japan. A ride of this scale is quite expensive and will probably only be built at a Disney or Universal size theme park. The G3 system pushes the envelope even further and will be interesting to see if a theme park ever decides to tackle the challenge of creating one.

Have you been on one of these robotic arm rides? What do you think of the RoboCoaster?