Things To Do in Theme Park Queues

Do you ever get bored while waiting in line for your favorite roller coaster? You’re not the only one and at least one person has decided to do something about it! We recently caught up with the creative multi-award winning author and theme park enthusiast Scott Wegener who put together the book and phone apps filled with activities specifically for amusement park lines: Things to Do In Theme Park Queues 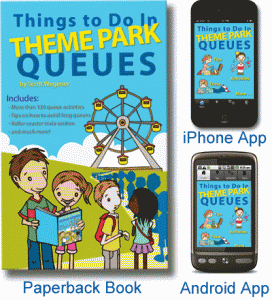 101: How did your book and apps of activities for theme park lines come about?

Scott: A combination of interests really.

First, being a theme park enthusiast I love to share or advise people of how to get the most out of their day at a theme park, especially Disney parks that have so many world class attractions to visit in a day or two. I want people to love theme parks as much as I do and knowing the queuing is the most tedious part, I wanted to distract them with something fun between attractions.

Second, I love a creative challenge. The book and apps gave me the challenge to comeup with a collection of activities that could be played in confined places, with limited resources and on a theme park theme. I love making up games or twisting original games into something even more fun or fair to play. For example I’ve also created the app Sport on a Pool Table that lets you play real sports rules with an ordinary pool table and balls. (I just wish inventing games was my day job!)

And perhaps the biggest reason for book and apps is because I live so far away from any big theme parks (down in Melbourne Australia). It’s very expensive and time consuming to get to a big theme park overseas. So, to feed my passion,I could be ‘in’ the theme parks while I dreamt up the activities. I’d picture myself standing in different lines for attraction, taking in what I could see and do, and who I was with, and started coming up with things to do. Good times.

Scott: Actually, I don’t mind the long lines personally. Obviously I’d prefer to walk straight onto an attraction but if I have to line up for an hour or more, as long as there’s no better option, I’m happy to bunker down for the wait.Maybe being an only child has helped me to learn to be creative with coming up with my own amusements.

101: What are some of your favorite activities for theme park lines?

Scott:  I like the simple guessing and thinking games personally, but there area couple of others that stand out to me.One I’ve called Risk, where you basically challenge the people behind you to a game of rock paper scissors and if you lose you go behind them in the line. Another is leapfrogging with a friend the entire line’s length. I haven’t actually tried that yet but would love to see it being done.

101: The Risk game sounds pretty epic. What’s the longest line you’ve been in?

Scott: Probably ‘only’ 90 minutes or so. I’d love to some day be in one of the opening day lines of a Disney attraction that is 4+ hours long. I want to see if I could watch 2+ movies in that time on an iPad or something. For instance, how cool would it have been to have watched Disney’s Cars 1 and 2 movies in their entirety while in line for the Cars ride on opening day! (hmm, maybe it’s just me who thinks that’s cool. . .)

Scott:  Firstly -Psychology – if a line’s under 30mins convince yourself it will be over in no time. For a line of 30mins or more, pretend you’re never actually going to leave the queue, assume the queue IS where you’re meant to be, not on the ride. This helps to take away anxiety, which makes time slow down.

Second – Keep busy. Time flies when you’re busy. Talking, playing games, theorizing over how to create a perpetual motion machine –if you keep your mind busy the line will fly by. That’s where my book and apps come into play.

Third -Interacting with those in your group or, even better,those you don’t know in front of behind you, is a great way to pass the time, both for you and them. You never know, you might even make good friends as you already have at least one thing in common – theme parks.

Scott:  Indiana Jones Adventure in Disneyland California is a good example of a good queuing area. It has a few interactive elements, like bumping a bamboo pole makes the spikes in the roof start to lower on you, or pulling on a rope that goes down a well that makes a voice call out a few random phrases. It also has inscriptions on the wall that you can decode. It’s mostly undercover, has a pre show movie, is themed very well all the way through and you can’t see how long the line is to freak you out. If every attraction in the world has a queue like that it would be a good start. Disney is the overall winner for best queuing areas – they are even starting to make some of their ‘old’ attraction lines interactive now, but there’s still plenty that could be done. 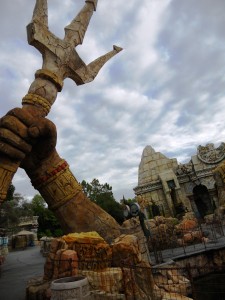 Scott: Anything with a tight block of zigzaging lines that is in the sun.

101: I have to agree, those “cattle pens” are the worst. What could they do to make lines better?

Scott: Well, firstly, let me say that I think lines are a somewhat important part of a ride – if you walk straight on to a coaster, it’s like watching the final battle scene of a movie, there’s no build up of anticipation or storyline. However, 10 minutes is probably the optimal wait time to an attraction, which is rare. The obvious minor things a line can benefit of is having significant theming, not being two tight, not being able to see how many people are in front of you and under cover for hot or wet days. That’s the basics.Have changing content in the queues, like a pre ride movie that is different every hour or so would help.

Ultimately though, having more interactivity in a line is key. Touch screen games, like Angry Birds, games with many levels you can’t master in the time you have playing them in one line up, and you can enter passwords to start from that level when you return etc. Or maybe some audience voting opportunities, either for the line pre-movies or even the attractions outcome itself (if it’s a simulator type ride or performance or something – not a coaster ;). If a park can make the line up process an actual part of the experience of the attraction and something you look forward to – imagine how much fun a day would be then at a theme park! That’s where my book and apps come in, to help get closer to this ultimate goal.

101: Where can people find out more about your products?

Scott: Visit ThemeParkQueues.com for more info on the products. I’ve also created a Coaster 101 special offer:get 20% off the paperback book (not the apps) enter the code U3T929W3 on the Discount Coupon Holders cart page at the website.

101: That’s a great deal! Thanks again for taking the time to answer our questions and for helping to creatively alleviate our boredom while waiting in lines.