Welcome to our first interview feature of 2012! Brad Sherman is a builder of amusement ride models. Thanks to Brad for taking the time to answering a few of our questions about model building. 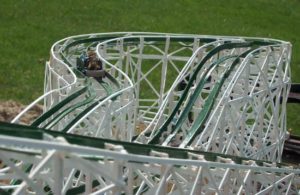 101: Could you tell us a little bit about yourself? Where are you from, what do you do?
Brad: I am originally from Goshen, Indiana and have lived in central Ohio since the mid 90’s. Upon graduating in 1997 from the Columbus College of Art and Design, I landed my dream job in 2D animation, drawing characters and effects for various film studios. The studio I worked at unfortunately closed and I have been doing graphic design since. I have also had the opportunity to work with www.tbfx.com create animatronics for Congo River Expedition, a water attraction at Schlitterbahn in New Braunfels, TX. I still do freelance animation and illustration when time allows. While I haven’t built any roller coaster models in a few years, I love doing them and would be happy to custom build one if a park or collector is interested.
101: Sounds like some great experiences. How did you get into building 3D roller coaster models?
Brad: My interest in theme parks and ride design originated from annual trips with my family to Marriott’s (now Six Flags) Great America in Gurnee, IL and a few visits to Walt Disney World. We also visited other parks like Kings Island and Cedar Point every few years. I have always loved the artistic aspect to a theme park, from the park maps to the theming on rides. There is something about offering people an escape, if only for a few hours. Disney has always been a favorite since it blends the traditional look and feel of an amusement park with attractions that encourage interaction and learning. Through these trips, I developed a strong interest in coaster design, especially Arrow Dynamics, who pioneered many attractions for parks over the years.
Growing up I tried to build roller coaster models out of the cheapest materials a teenager could get (laughs). Early ones were made from toothpicks or balsa wood, and I eventually tried to custom build a steel looping coaster using plastic tubing for supports and track. It is very difficult to build your own train and wheel assemblies from scratch since there is little room for error. In the 90’s I became even more inspired by working models from Chris Brewer of Coasterworks, and Michael Graham (whose Arrow-inspired Black Plague toured science centers a few years ago). Michael is among the talented team at The Gravity Group (www.thegravitygroup.com), and is one of the creators of the very popular CoasterDynamix system, which debuted around 2004. That summer he asked me to construct Cedar Point’s Raptor out of their kits for an event held at the park, and it was a hit. CoasterDynamix has really grown, and they now offer several types of coaster models in both 1:48 (O) and 1:87 (H.O.) scale. 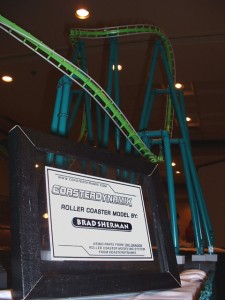 101: CoasterDynamix offers the most realistic coaster models to purchase that I’ve seen. Could you tell us a little bit about your design and construction process? Do you plan out the designs beforehand in any way? What materials do you use?
Brad: First, I should mention that proportions are much easier to keep when you are building a static (non-working) model. If you are building a working model, the larger the scale the more realistic it will look and operate. A small coaster model will lose momentum very quickly and therefore you have to sacrifice aesthetics for operation by exaggerating the first hills to make sure it has enough speed.
Regardless of type, you can never have too much reference, so I start with as many photos as I can and visit the ride if possible. With Google satellite it is easier than ever to study a ride’s footprint. Websites such as Bing also feature angled ‘birds eye’ views instead of just directly above. Public Relations departments and websites like www.rcdb.com are essential when you need a ride’s stats. All of this helps me to plan out a design. For static models I use a model scale ruler (which has measurements in the popular model railroad scales) to help construct the ride as close to scale as possible. As mentioned above I have experimented with different materials, but would recommend balsa wood and bass wood for wooden coasters. Evergreen Scale Models features many types of styrene plastic tubing which work very well for steel coaster supports and styrene sheets for constructing stations, etc. Most hobby shops will carry these materials, along with Cyanoacrylate glue which is excellent for bonding wood and plastic. As for steel coaster track,you can simply use plastic or metal tubing, with wire or staples for crossties depending on which style of coaster you are creating. Working coasters can be made by modifying model railroad wheelsets, or using a CoasterDynamix kit as a starter. I add details where possible and include scenery, lights and scale figures. I go into more detail for each project on my website.
101: What would we do without Google satellite imagery? Have you ever created any model or done any other work for an amusement park company or supplier?

Brad: In 2002 I was asked to construct a model of the Tidal Wave shuttle coaster for California’s Great America in Santa Clara. The park was celebrating the ride’s 25th anniversary, which is special for any ride if you ask me. I only had 2 months but was able to build a 1:160 (N) scale static model in my spare time. I was thrilled since Tidal Wave was one of my favorite attractions growing up at the Gurnee park. Steven Wilson of www.greatamericaparks.com graciously provided photos of the coaster for reference (by this time it had been rethemed). The model featured Plastruct ladders for track, and modified FALLER Big Dipper coaster cars as the train. A graphic of the famous waves lined the launch, and the station sported a boat and hurricane flag just like the ride. Both the coaster and my model were featured on the news which was very cool. The model is on display in one of the offices at the park. Neither Great America park has their shuttle anymore (Gurnee’s is at Kentucky Kingdom in Louisville, KY and has used parts from its west coast twin). 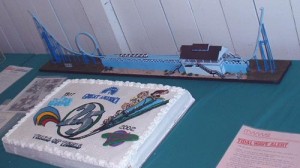 I also have a 1:87 scale model of the wooden side friction coaster that stood at Millbrook Park in New Boston, OH along the Ohio River. It is located in the Mayor’s building at Rt 52 and Center St. This was a challenge as there aren’t many photos of coasters in the early 1900’s! I think I came pretty close.
101: The Tidal Wave model looks great! Since this is for Coaster 101 I have to ask, do you enjoy riding roller coasters and if so which is your favorite and why?
Brad: I love them just as much as I did growing up. After riding over 470 different coasters in the US and Canada, it is hard to decide! Many of the newer ones are examples of engineering perfection and its hard to go anywhere without riding a coaster that has been featured on a top 10 list. My personal favorites are Holiday World’s Legend (wood, 2000, CCI) and Dollywood’s Tennessee Tornado (steel, 1999, Arrow). Legend blew me away when it opened. It is a relentless chase through the woods with the Headless Horseman and it doesn’t let up. Tennessee Tornado is short but sweet and may surprise many who are familiar with Arrow’s coasters of the 70’s and 80’s. They clearly perfected their looping coaster with this design, and it’s a shame they did not build more.
101: Thanks again to Brad for taking the time to answer our questions! You can view more of Brad’s work by visiting his website.