I have been visiting Six Flags New England for as long as I can remember, and there has not been a season in at least the past ten years that I have not made at least one visit to the park. My ride opinions have changed over time, but I feel that in recent years the consistency of the rides has allowed me to give a top ten ranking of the park’s best coasters. 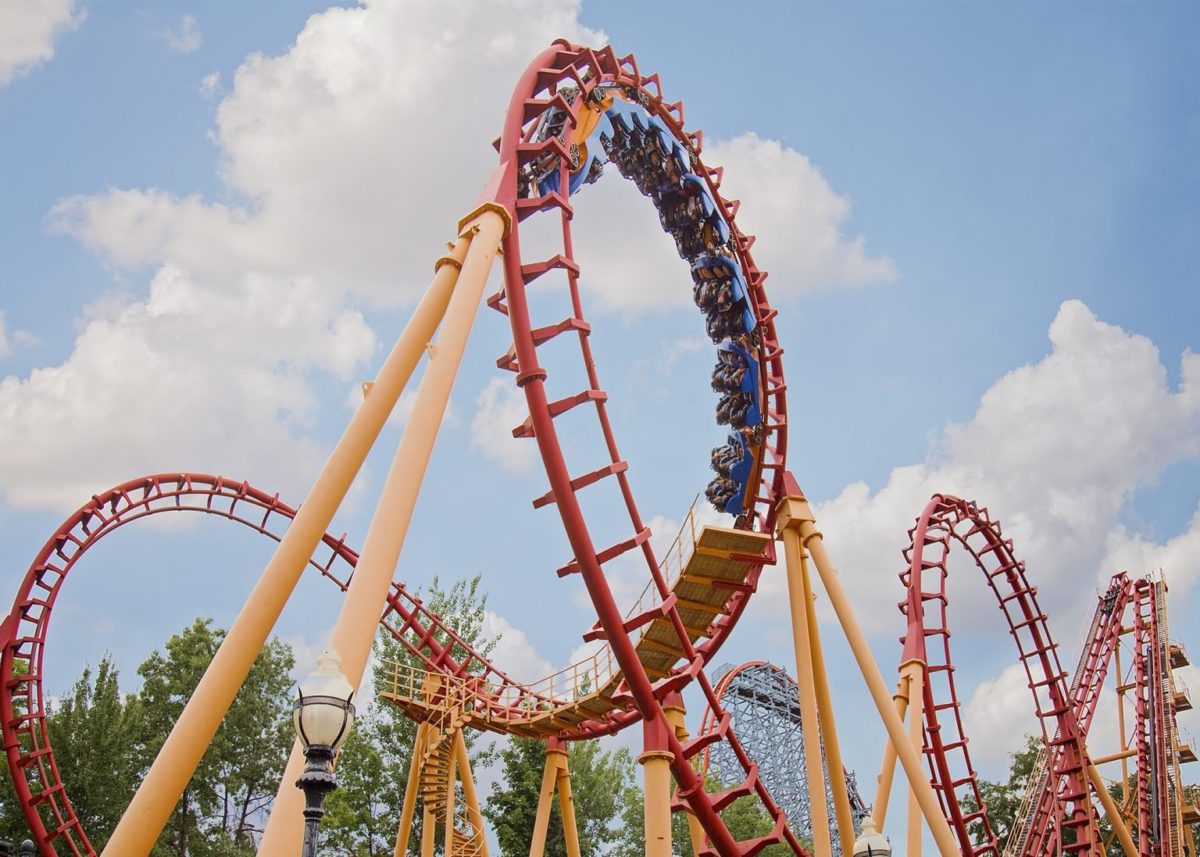 The Vekoma Boomerang model is ever-present at most parks around the world, and usually it is a forgettable addition, used solely to bump up the coaster count and offer a ride for non-enthusiasts to wait in line for. However, Flashback at Six Flags New England is memorable, but not for a good reason. The ride is incredibly rough, and since I have been visiting the park it has suffered from multiple prolonged downtime, from cable issues to getting stuck partially up the cobra roll. A smooth boomerang can actually be an enjoyable experience, and a great way to experience high forces in the backwards loop, but when a ride is as uncomfortable as Flashback it is not worth more than one ride just to get the credit. 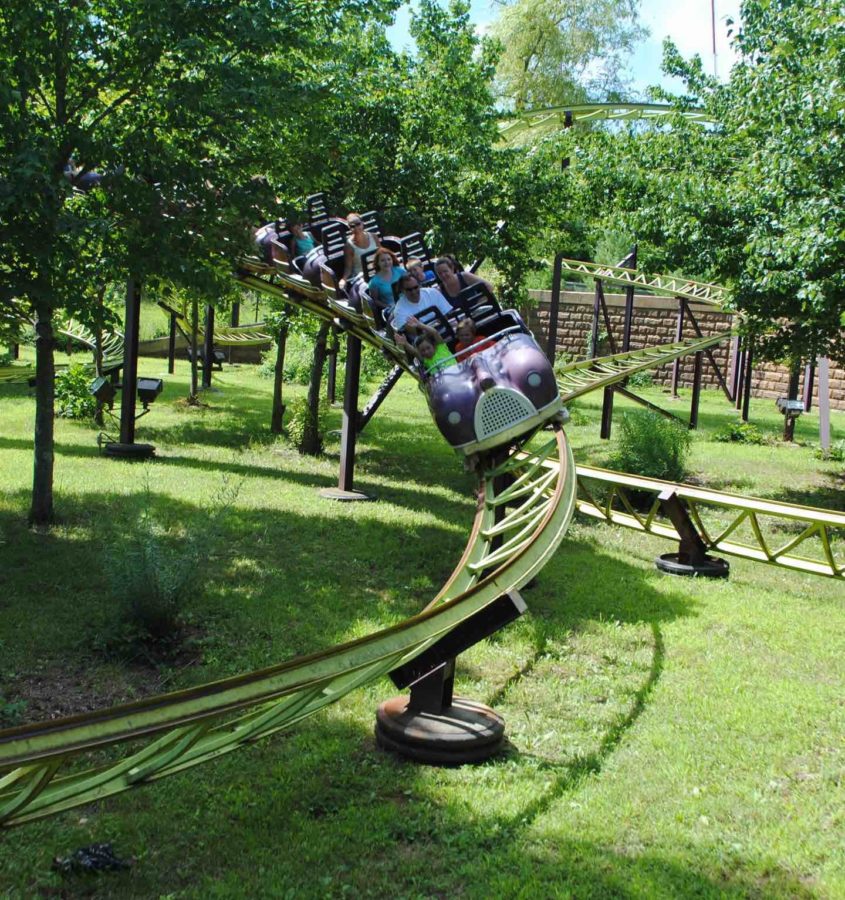 Catwoman Whip (formerly Poison Ivy’s Tangled Train from 2000-2006) is a family coaster located in the DC Universe section of the park, and is a clone of Harley Quinn Crazy Train at Six Flags Great Adventure. Both coasters have the longest trains on any coaster I have ever seen, and the back cars actually offer some decent whipping over the handful of hills on the ride. If nothing else, the views of Superman while on the ride and the photo opportunities in the queue line are nice in and of themselves. The layout is a fairly simple figure 8 style shape, but the foliage left over from the Poison Ivy days adds some fun and the train whizzes by the ground. 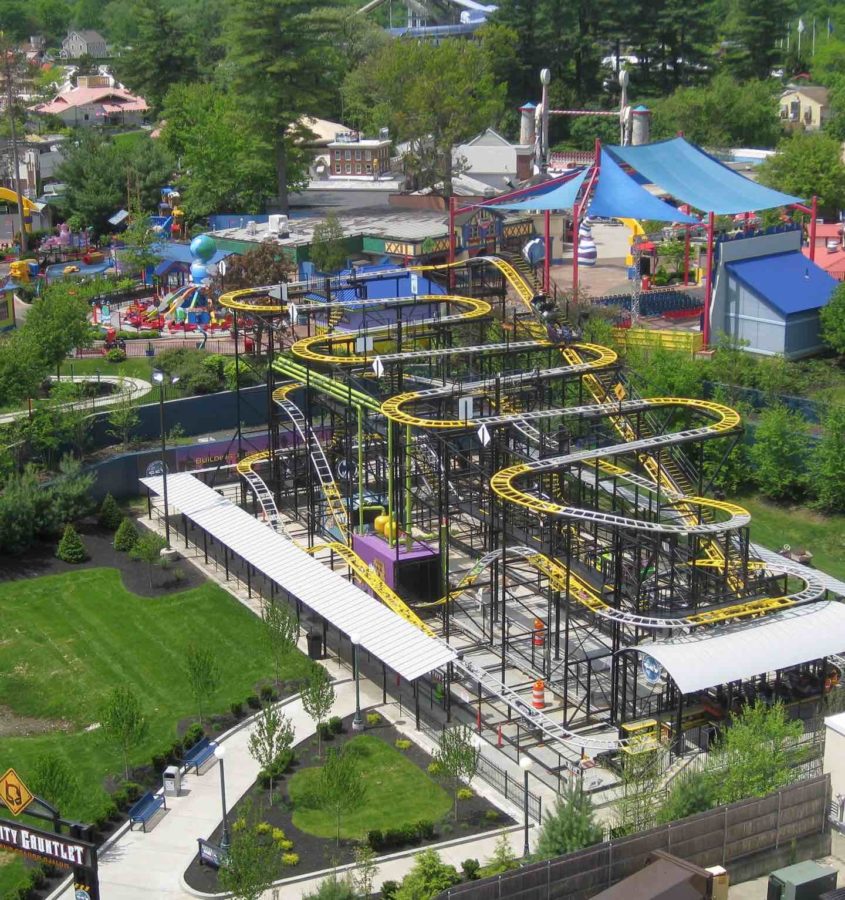 Catwoman Whip may have the longest train on a coaster, but Gotham City Gauntlet: Escape From Arkham Asylum takes the trophy for the longest name. This wild mouse was relocated and rethemed from Kentucky Kingdom, and it sits right across from Catowman in the DC section of the park. Other than the few bits of theming on the trains and throughout the layout, GCGEFAA (wow, even the abbreviation is long) is a pretty standard wild mouse, although I will say that the brakes hit remarkably hard, and standing at the brake run you will see some surprised and pained reactions of guests slamming out of the final hill. 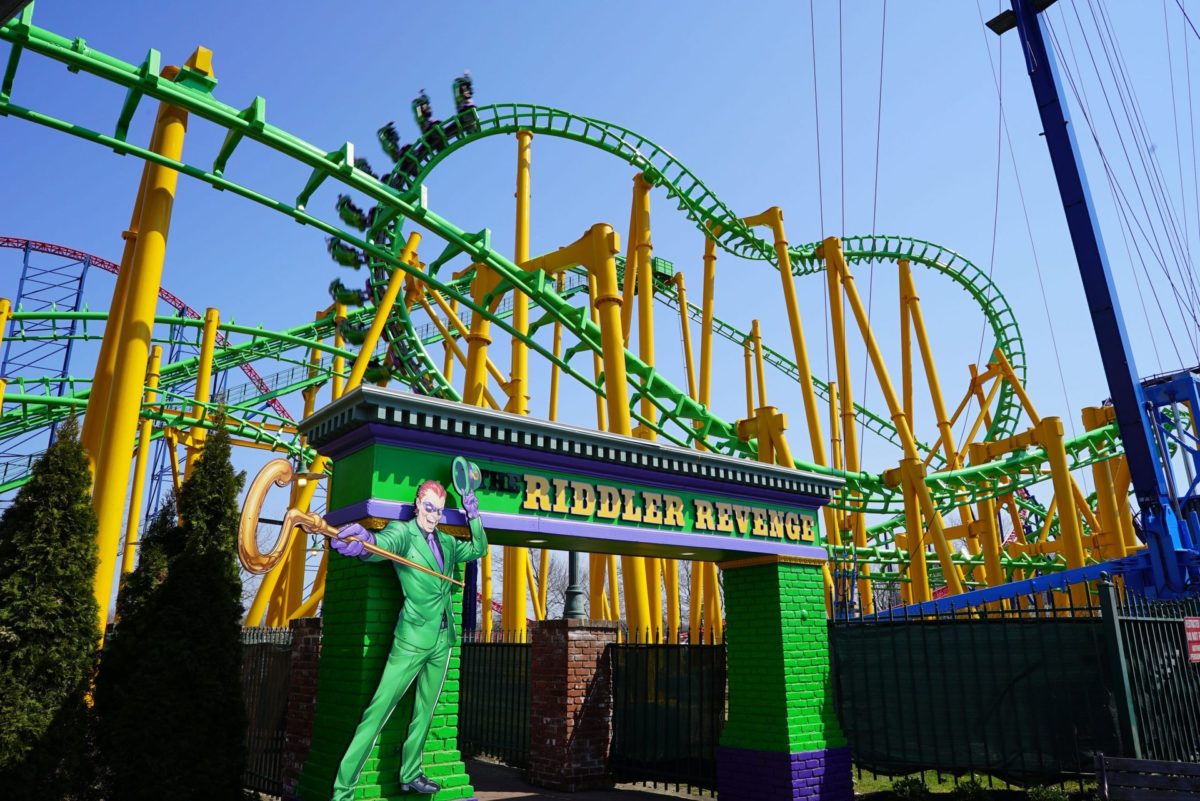 Even an updated SLC is still an SLC. The new trains with soft vest restraints are definitely an improvement over the previous bulky Vekoma over-the-shoulder harness, but the layout is unchanged. The ride is not completely uncomfortable, there are a few moments where the inversions are forceful and not overly rough, but that is a small minority of the layout. The shakiness and tight elements are the same as ever, landing this slightly more enjoyable clone towards the bottom of the park’s list. At least the new colors look nice! 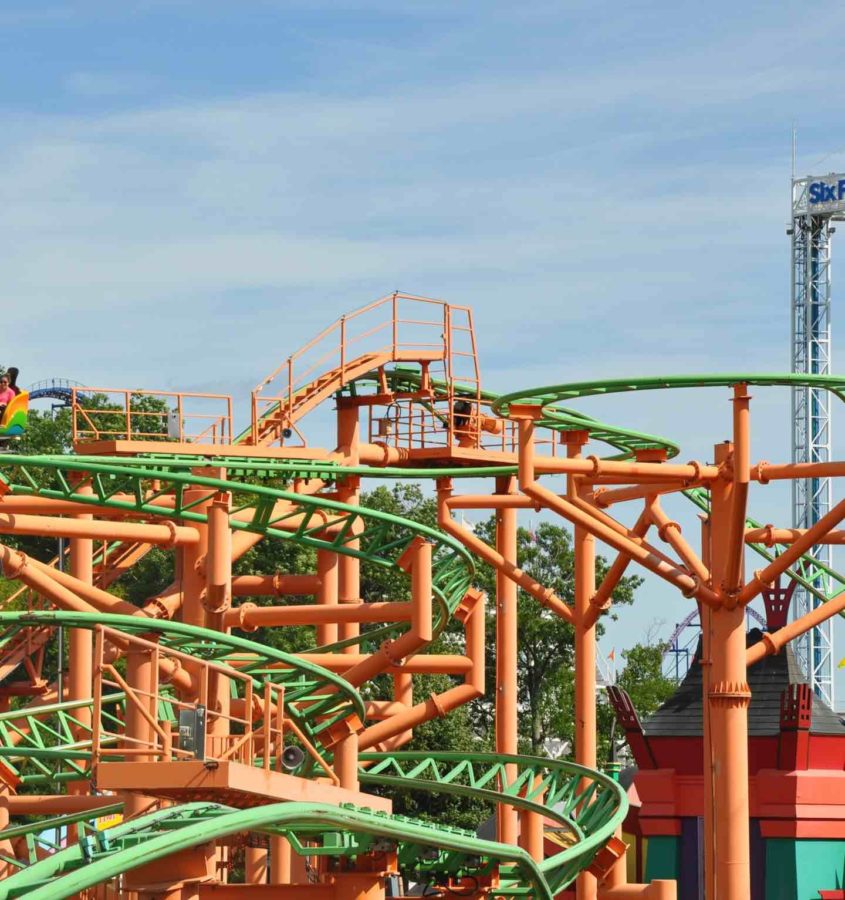 The fifth cloned coaster on this list (but not the last!) comes in the form of Pandemonium, the park’s Gerstlauer spinning coaster. This ride is a lot of fun, and has held up very well since its opening in 2005 as Mr. Six’s Pandemonium. The layout is an enjoyable mix of hills and helixes, and there is some actual airtime on the hills at the end that interact nicely with the terrain. The spinning will vary depending on who is in your car, but even without a lot of spin, the ride can still be enjoyed. Being one of the only family coasters at SFNE, Pandemonium is prone to very long lines, so if you’re making a visit make sure to ride this and our next entry early in the day. 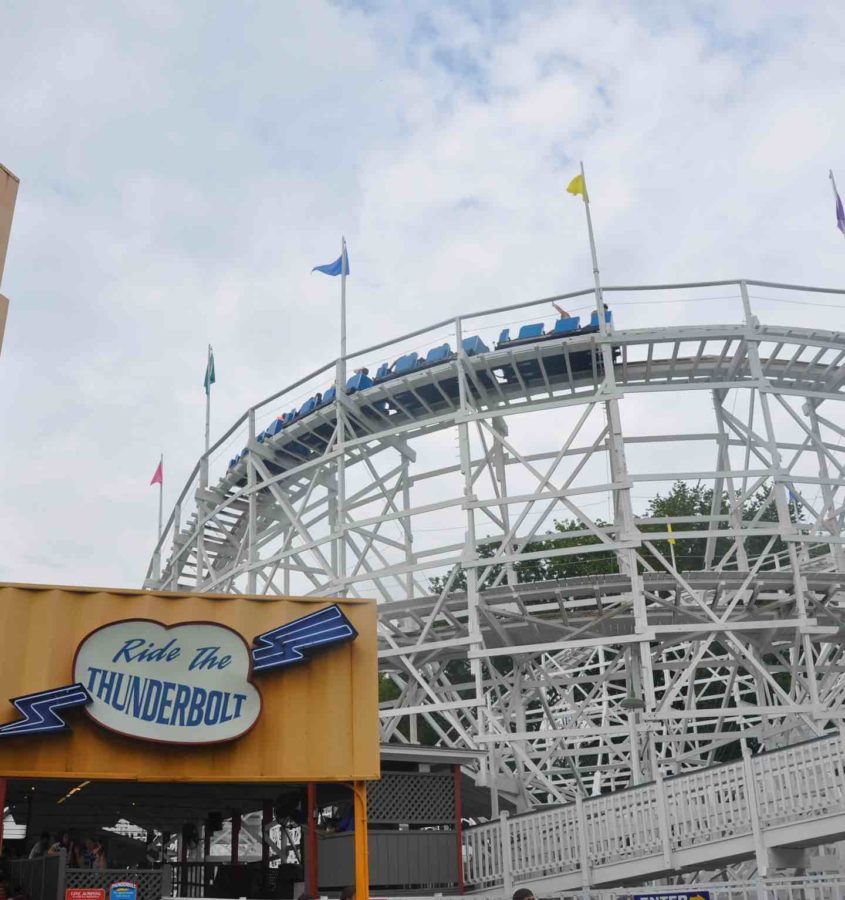 The park’s only wooden coaster, and the oldest in the Six Flags chain comes in at number five on this list. While the layout is very good and the airtime moments still pop after 80 years, a few major potholes and rough patches keep this coaster from going any higher on the list. At the bottom of almost every hill is a jolt that varies from mild to bone-rattling. That doesn’t negate the great airtime that came right before it though, and the comfortable trains with unrestricting restraints are another big plus. Overall, the history and airtime earn this classic woodie a worthy spot in the top half of the park. 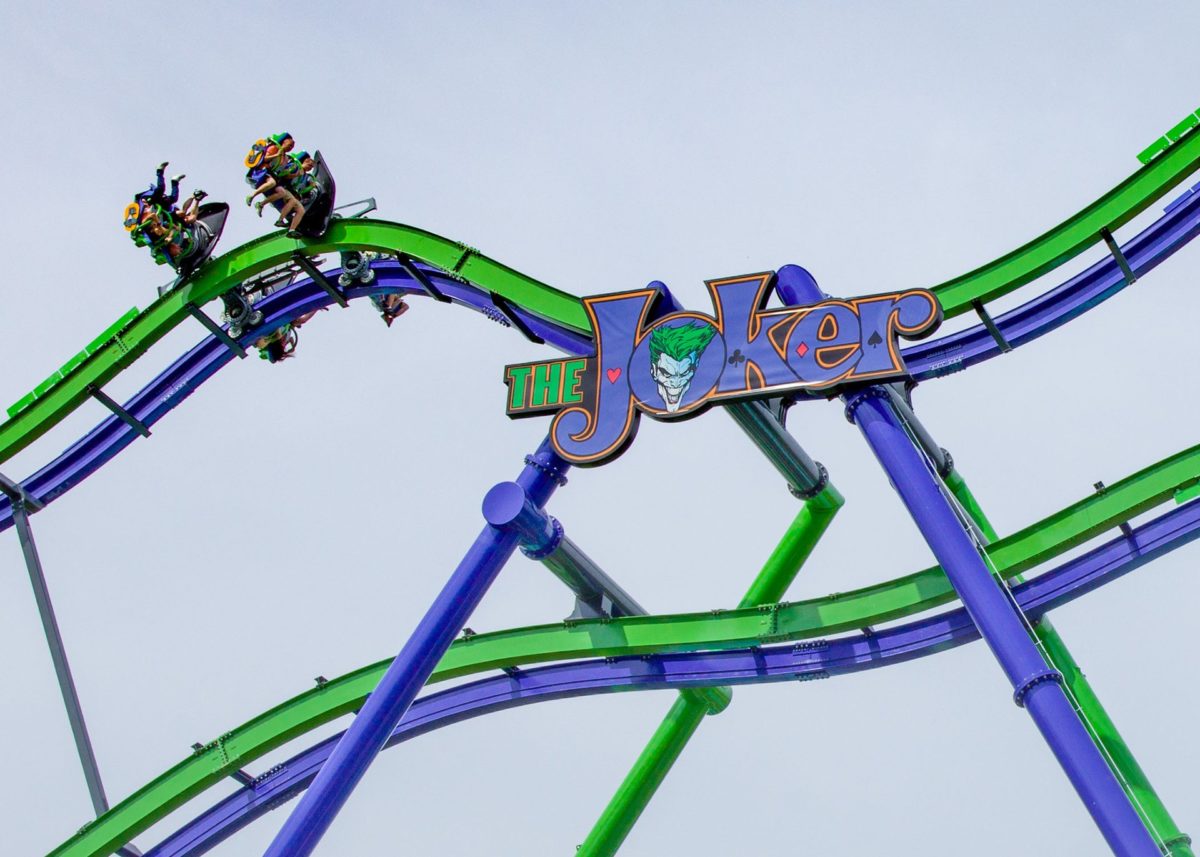 Another one of the clones residing at Six Flags New England is the S&S 4D free spin, The Joker. If you’ve ridden one of these, you know what you’re in for, although the Six Flags New England version is notorious for having the watered down spinning, so it’s more of a gliding coaster than a spinning and flipping one. The color scheme looks good among the DC coasters in the Gotham City area, and the interaction with Harley Quinn Spinsanity is also fun. The ride remains smooth, and is a genuinely scary experience if you don’t like being held upside down (like me). The Joker sits comfortably as a solid supporting coaster and tops the cloned coasters at the park. 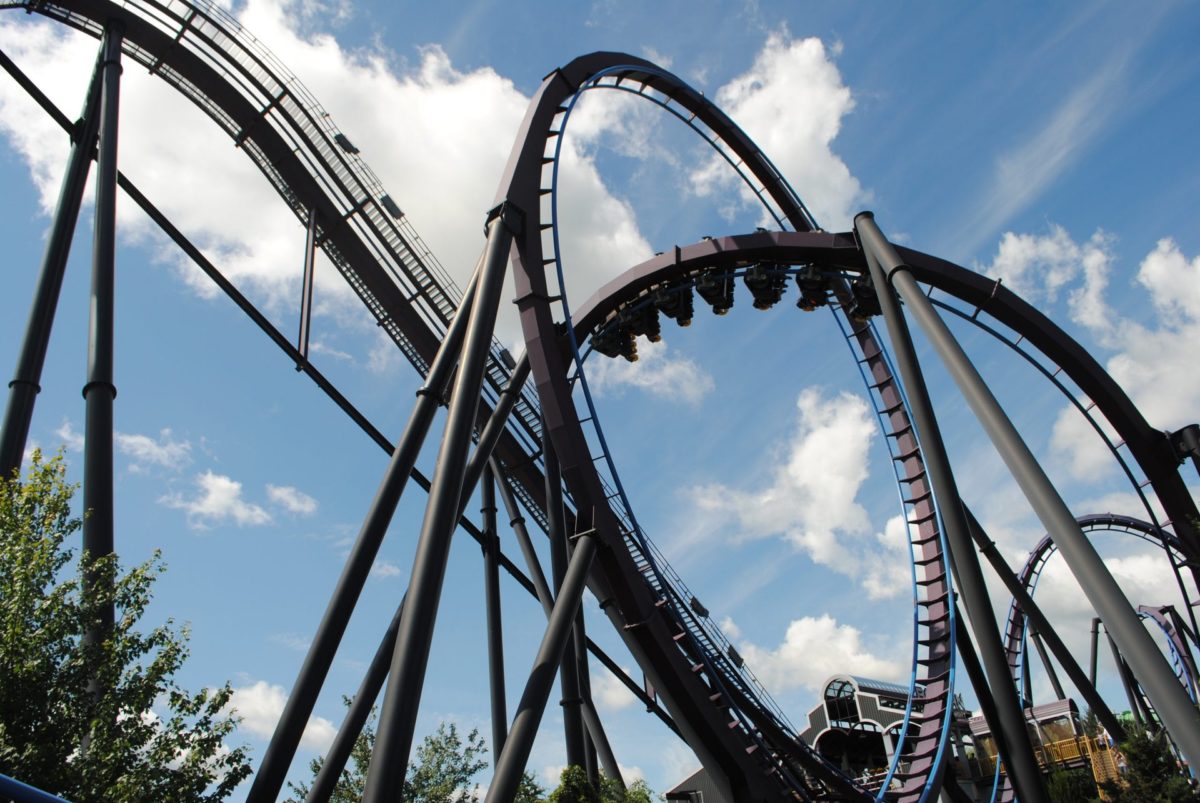 A B&M floorless coaster is always a good addition to any lineup, and Batman is no exception. With 5 inversions in its relatively short layout, you are upside down almost longer than you are right side up, save for a slow turnaround where the park inexplicably placed the ride photo. The first loop on Batman is very large and can be seen from the entrance to the Gotham City section, it offers great hangtime and is a fun start to the ride. The zero-g roll is my personal favorite element on the ride, because it is taken very fast and if you are sitting on the end seats you will get a nice whip through the inversion. The dive loop is iconic because it sits right over the entrance and makes for a great photo op. The interlocked corkscrews are not as rough as I remember, and offer a disorienting finale to the ride. Overall, Batman is a fun floorless with some fast paced inversions, but it doesn’t stand out enough to crack into the top two. 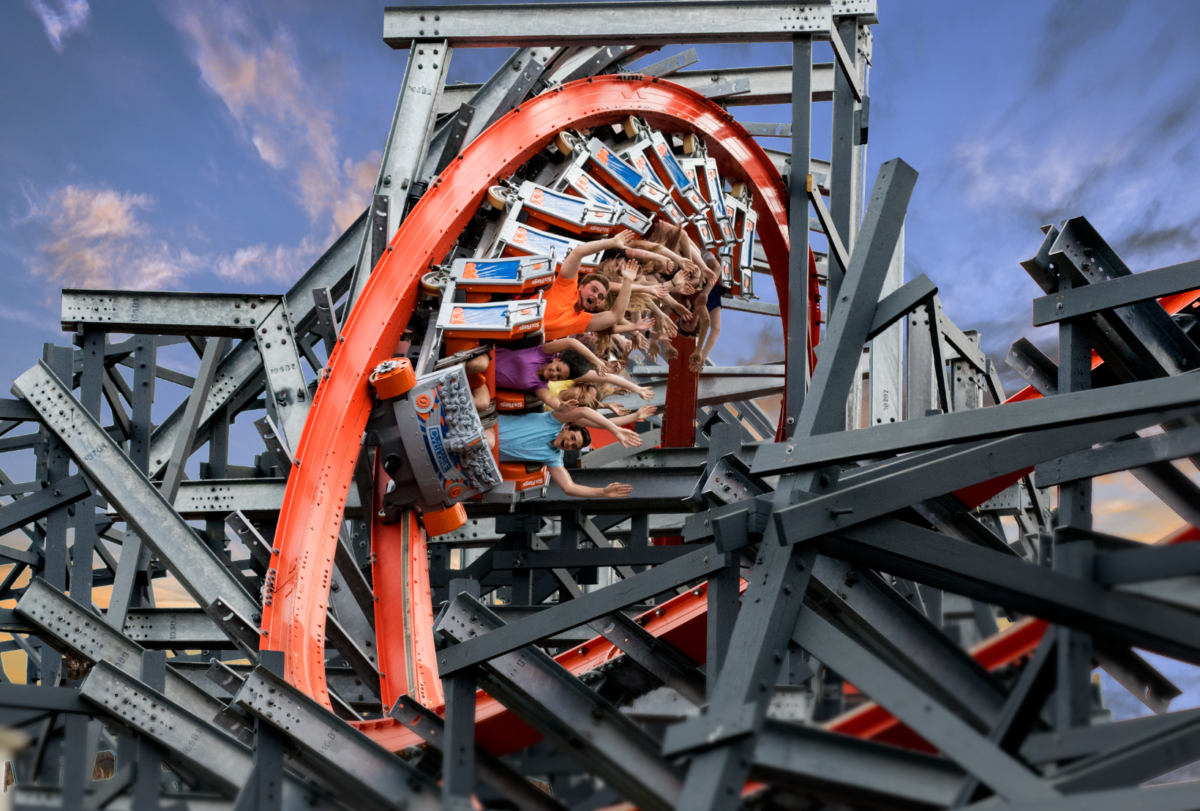 Six Flags New England is famous for having one of the best “one-two punches” at any park in the United States, but it is even more famous for causing debates over which of those punches hits harder. Personally, I put the park’s RMC hybrid at the number two spot. Wicked Cyclone was exactly what this park needed, an airtime machine that brought guests back to the North End of the park and distributed the crowds more evenly. Don’t let its size fool you, Wicked Cyclone may not be as tall as other RMCs, but it still delivers world class air and inversions. 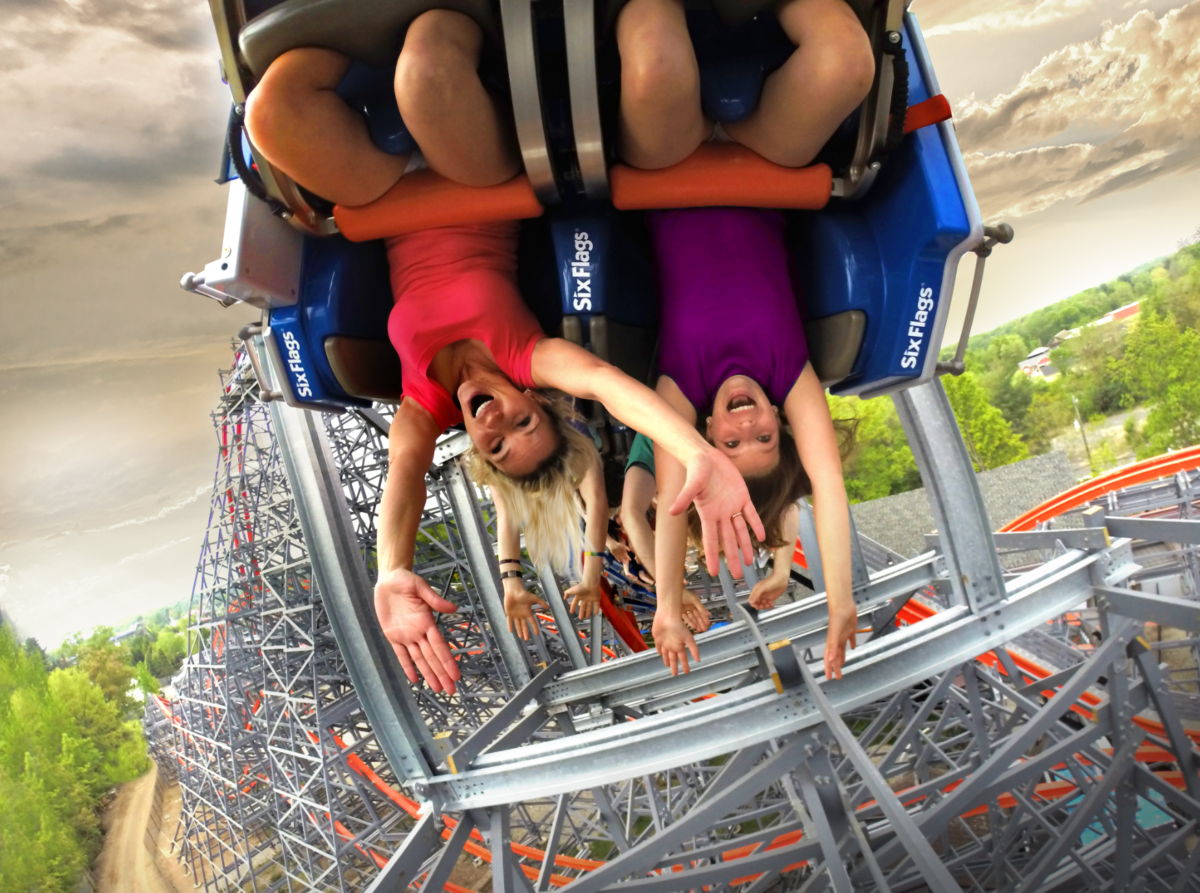 The first drop is incredible, and I don’t think there is a time that I haven’t grayed out on it recently. Followed immediately by a pop of airtime and a 180-degree stall that flips the train the same way out as it went in, creating a unique and disorienting element. Leave it to RMC to add whippy, twisted track even while riders are hanging upside down. The elements that follow are just as good, a great double down past the queue line, and an outward banked hill located in the interior structure. 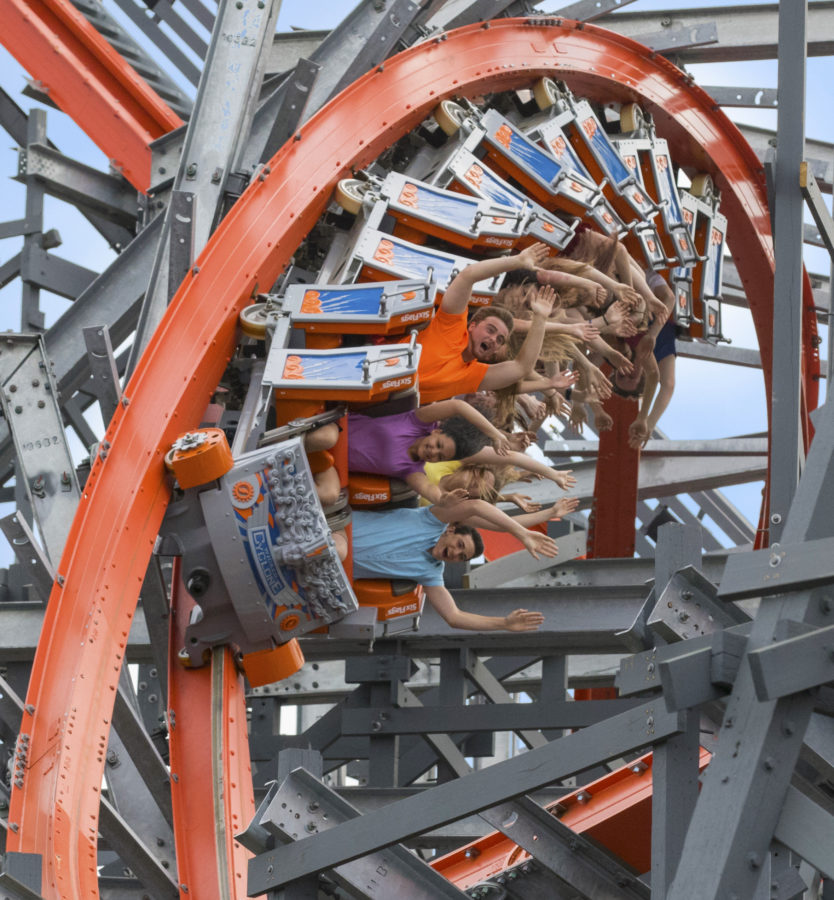 Unlike Batman, the photo opportunity on this ride is great, the camera is placed at the Alan Schilke-coined “Drivers Ed Turn” where the train thrashes over a rapid hill that twists right to left and back again. Two slow zero g rolls provide hangtime while inverting, and a few more pops and a small outward hill bring the train slamming into the brakes. Wicked Cyclone is one of the most underrated coasters I have experienced, and would be the crown jewel of any park. Well, any park that didn’t have… 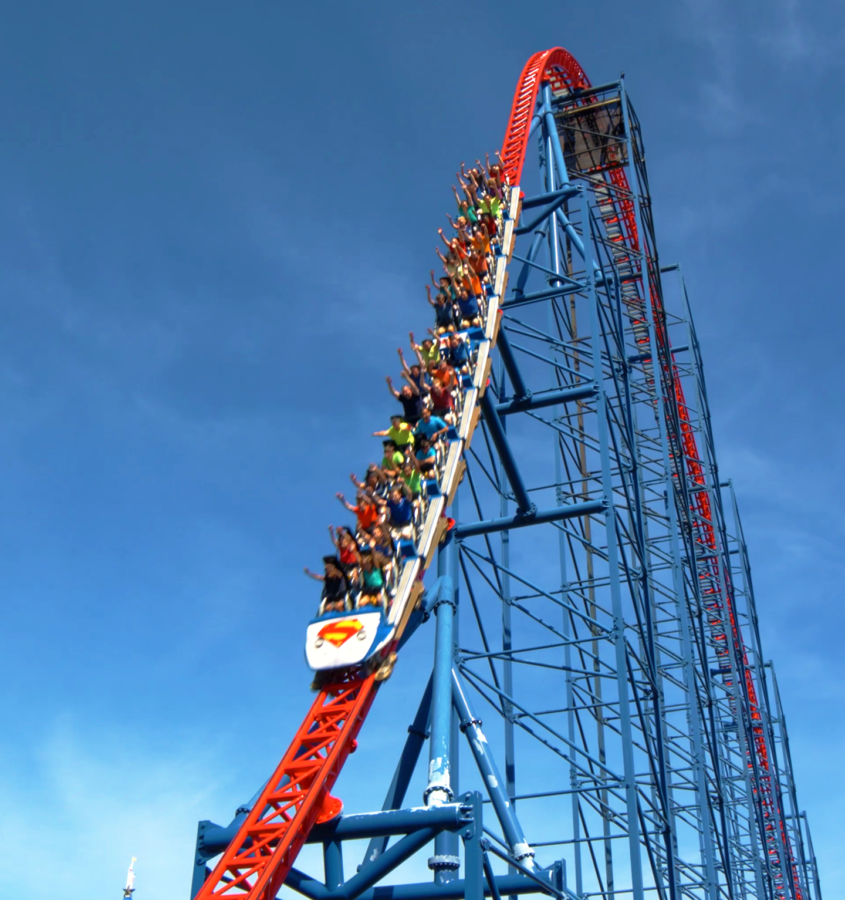 The original king of New England still holds his crown 20 years and a few name changes later. There’s no arguing that Superman The Ride offers some of the most epic, sustained airtime Intamin has ever created, but what isn’t talked about is the ingenious layout. Superman should be in the conversation for the greatest layout ever conceived, with the ejector-packed first half, and the spaghetti bowl second half offering crushing Gs and three extra camelbacks at the end for good measure before the train slams into the brakes just as it looks like it’s about to crash into the station. This ride is also very long, and its sweeping layout is all over the DC Universe area where it resides. The lift hill looks enormous from anywhere in the park, and can even be seen across the Connecticut River on the drive over the bridge.

To address a common complaint, yes, the restraints are not comfortable. However, this does not take away from the ride experience. Similar to Skyrush, the airtime is so forceful and so intense that even if the restraint is pushed down to its maximum, you will still experience the negative Gs on each and every hill. 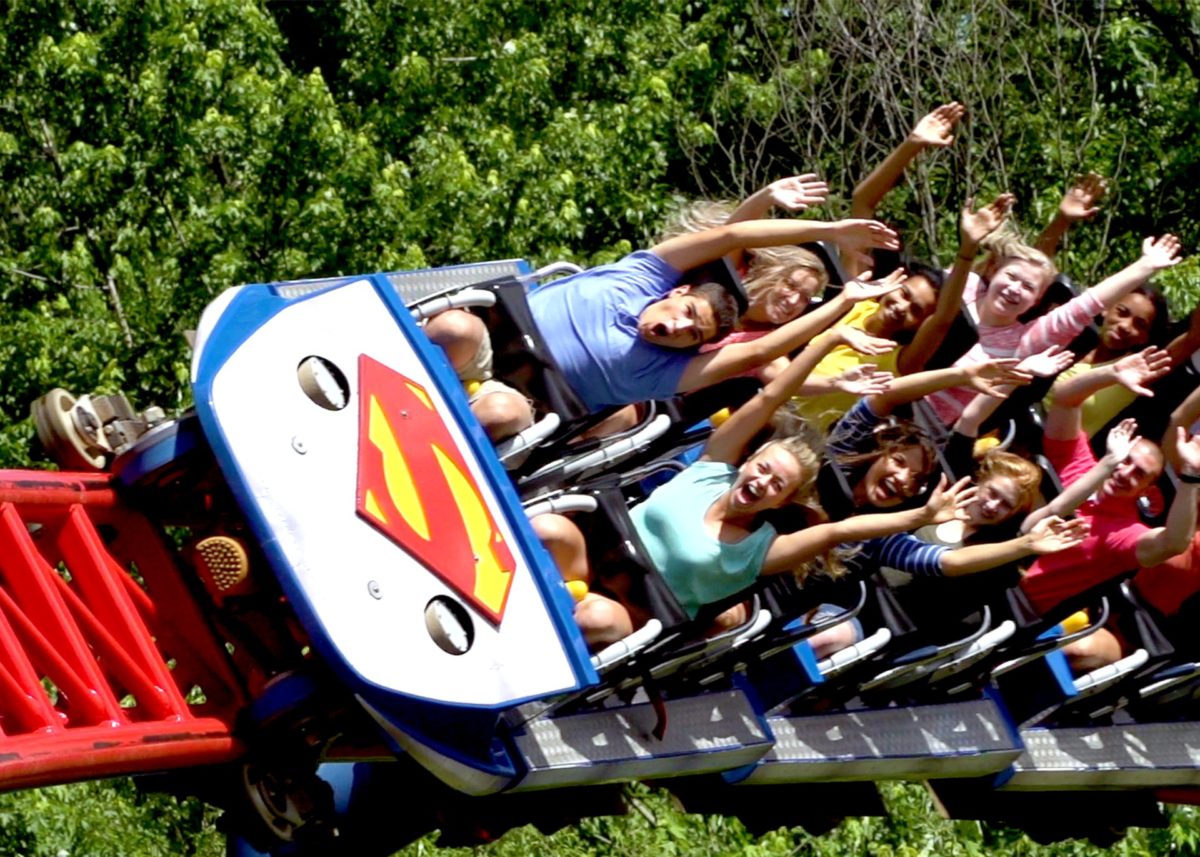 The first drop is great in any seat, whether it’s the unobstructed view staring 221 feet down from the front, or being yanked over the chain from the back rows. Plus, the classic John Williams theme blaring on the lift speakers is enough to get anyone excited. Superman The Ride has upheld its legacy over its history with the park, and has earned its reputation as the best ride in New England.

If you’ve been to Six Flags New England, let us know in the comments below if you agree with our rankings. If not, where would you place the coasters?