This is part two (Episode II) of my review series covering Star Wars: Galaxy’s Edge at Walt Disney World. In this article, I will be covering the droid building experience at Droid Depot. If you missed the first article detailing the overview of the land, check that out here. You can also check out this episode of The Coaster101 Podcast where we take a deep dive into the land, and rides in particular, with Hunter from Theme Park Hunting. Now, let’s get to the droid building!

Droid Depot is located next to Savi’s Workshop past the First Order Cargo, towards the Toy Story Land entrance of the land. The shop is (of course) very highly themed, and immersive as soon as you step through the door. Droid Depot does accept reservations ahead of time, so if you know for a fact that you’re going to Galaxy’s Edge with the intent of doing the experience, I would recommend booking that ahead of time. If you do choose to make a reservation, try to book it as close to park closing as possible. This way, you won’t have to carry your droid around all day, since Disney no longer has the merchandise storing options. Also, this will give you a chance to get a look at how great Galaxy’s Edge looks at night. 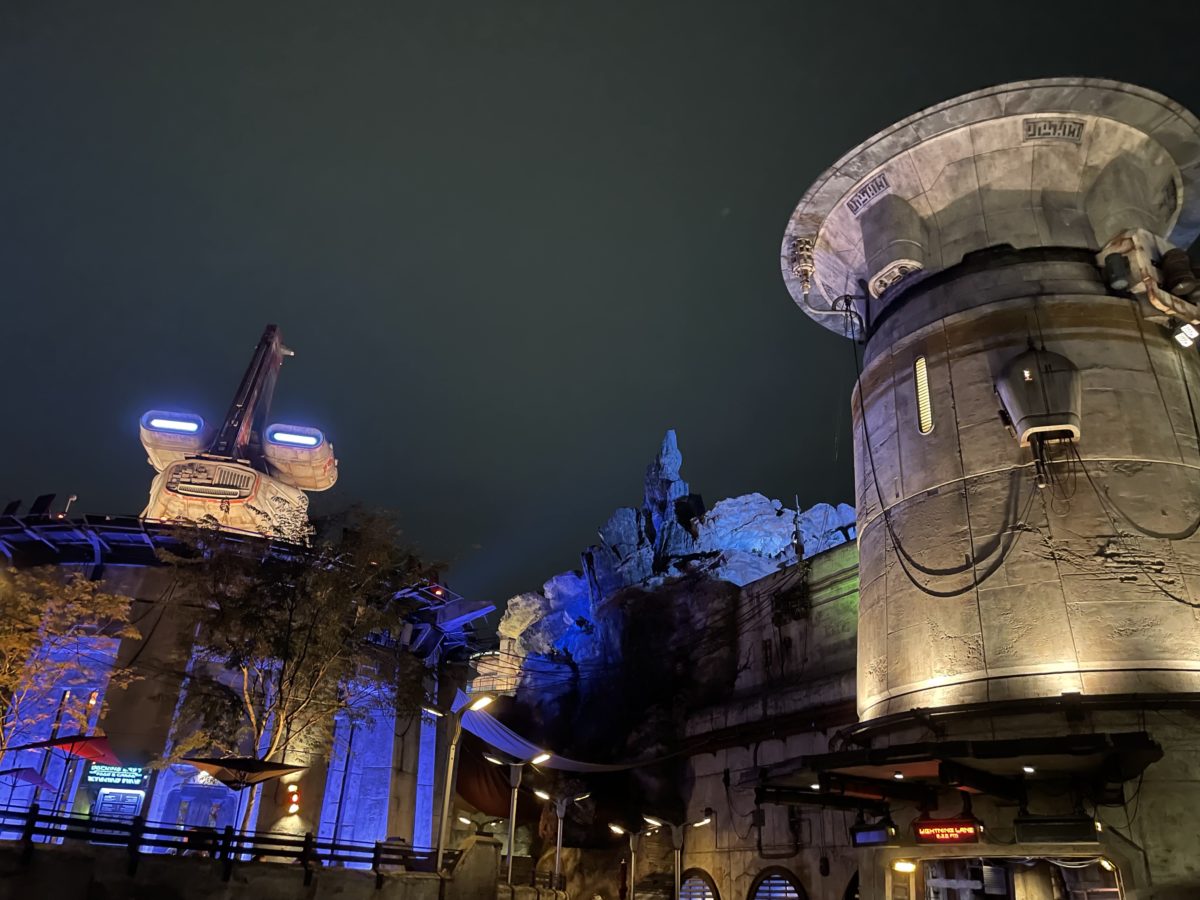 If you are like me and opt to not make a reservation (or they are booked up for the day), there is also a standby line you can wait in to build your droid. The standby line was never too crowded, and especially not when I went at night, I walked right up to the desk. Once you give the cast member your name, they will ask you which droid you are going to build, either a BB-series like BB-8, or an R-series, similar to R2-D2. Both droids cost the same price to build, $99.99. Disney passholder discounts are not available for the droids themselves, but they are applicable to accessories and add-ons. Once you’ve paid, they will hand you a droid building basket, and you can head over to the conveyor belt. 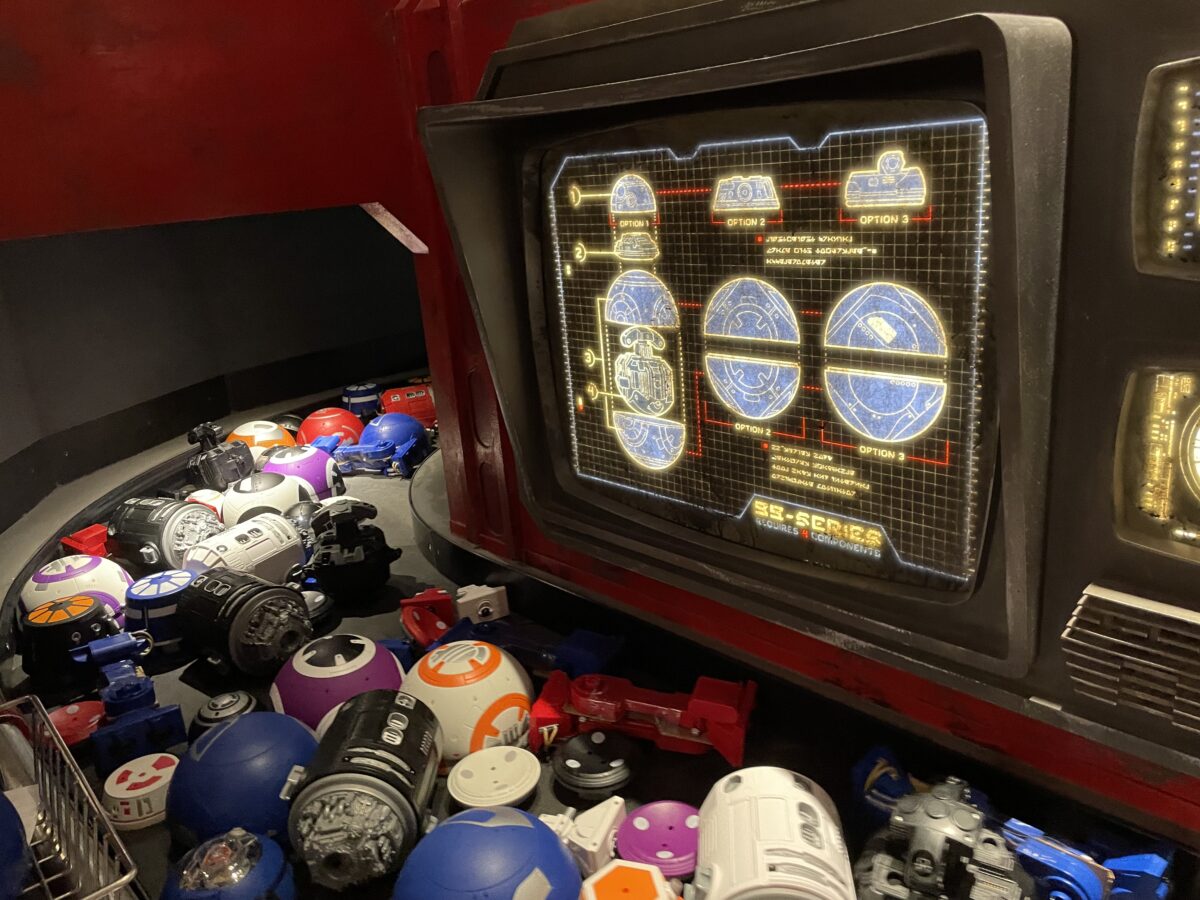 There is a conveyor belt overhead transporting life-sized droid parts, but you’ll be building with the smaller sized ones whizzing by on the belt at waist level. 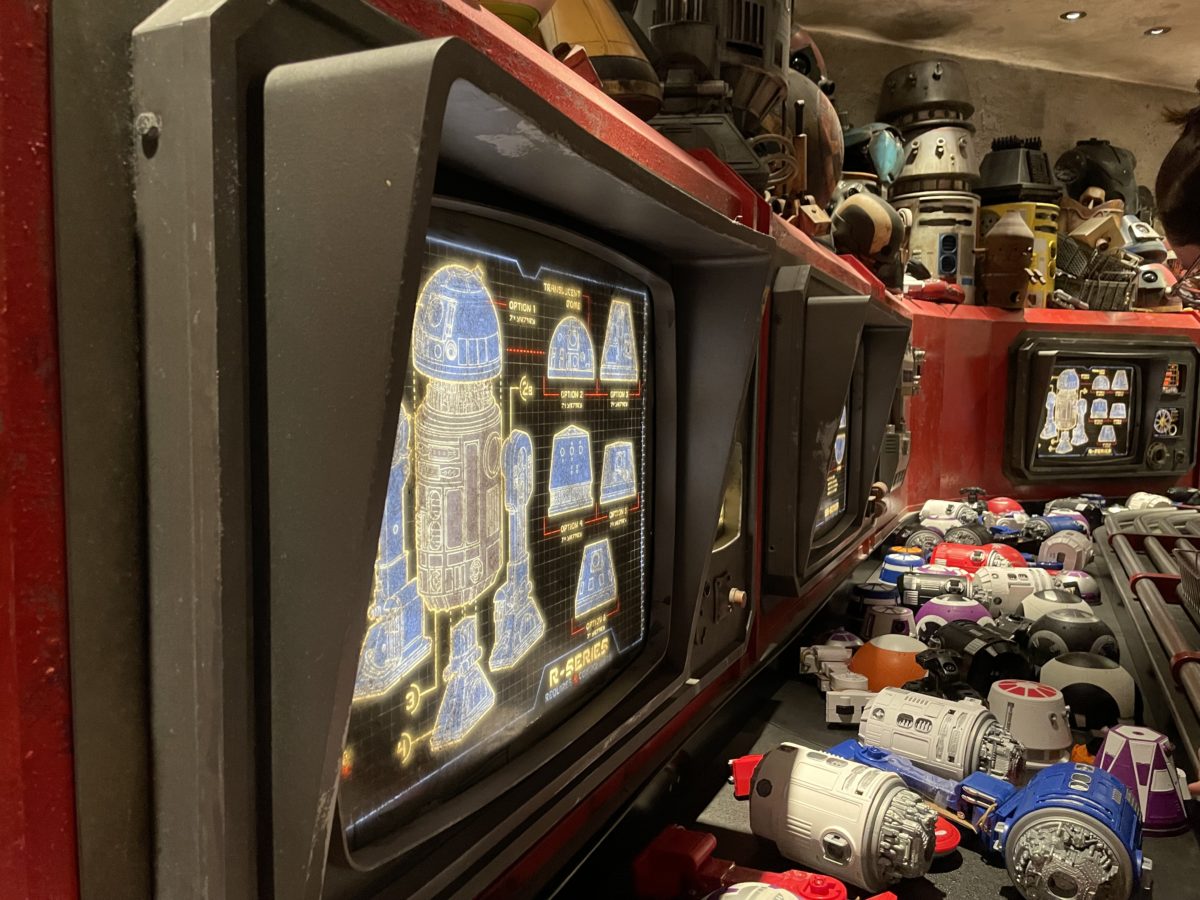 I chose to build the BB unit, and there are many different customizable parts for each droid. For the R-series, you can choose one head (out of six possible options), the main body, and the legs. 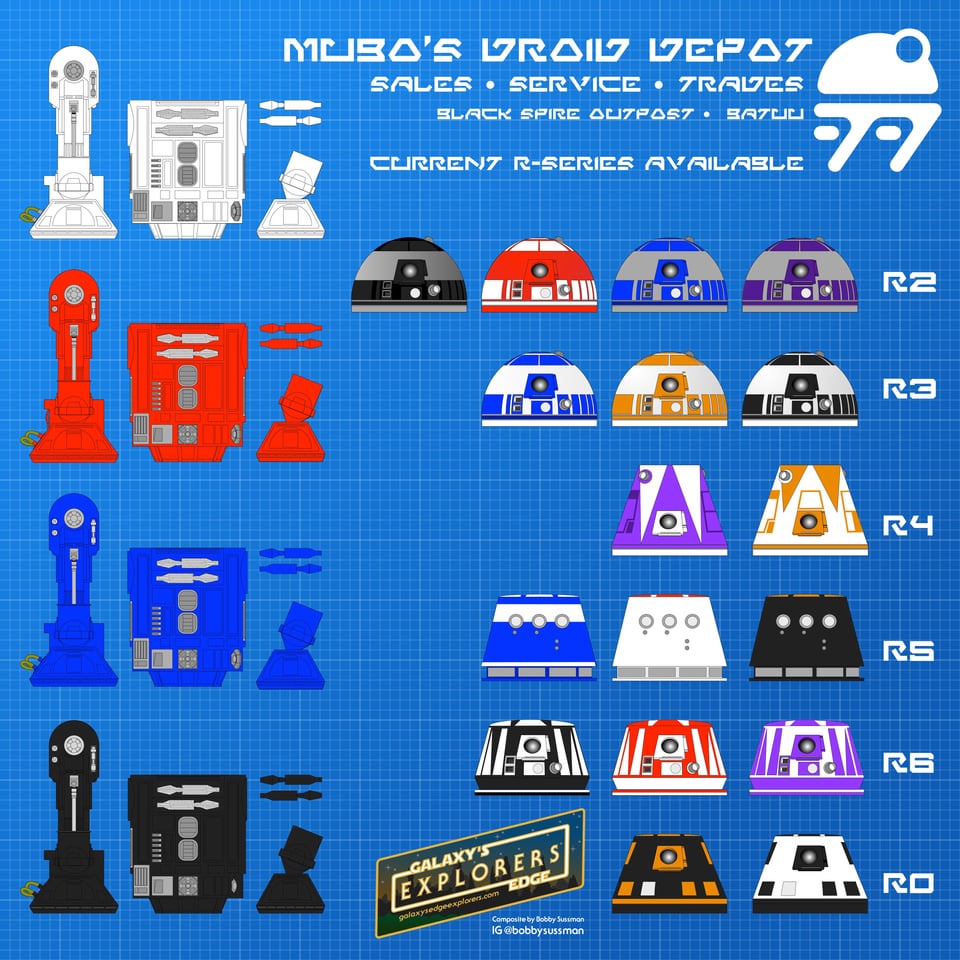 With the BB units, you need the center rolling mechanism (there is only one of these since they are identical and won’t be seen), one head (out of three options), a head connector, and the outer body pieces that will surround the rolling mechanism. 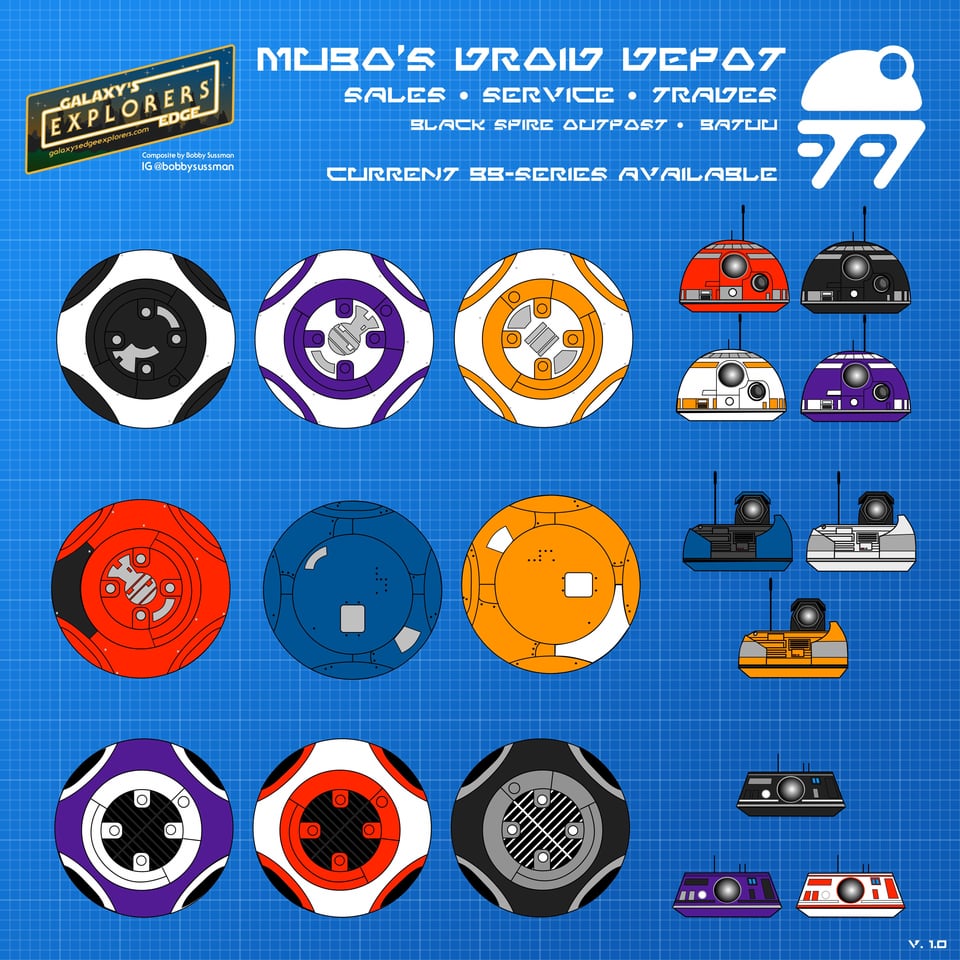 There is a large amount of possibilities in both color and style, so there is likely going to be something for everyone. If you’d like, you can look online ahead of time and see the options to get an idea of the droid you want before going in, but there’s no guarantee those parts will be available, or new parts added. You can always ask a cast member if you can’t find the exact part you want, and they’ll help you choose the best piece that matches your desired droid look.

It’s easy to stand at this conveyor belt all day going back and forth with different heads or different colors, but I’ll impart you with some words of wisdom that the cast member helping me shared: you will pick up and try all sorts of parts, but your first instinct will be the parts that you’ll ultimately end up choosing. And he was right! 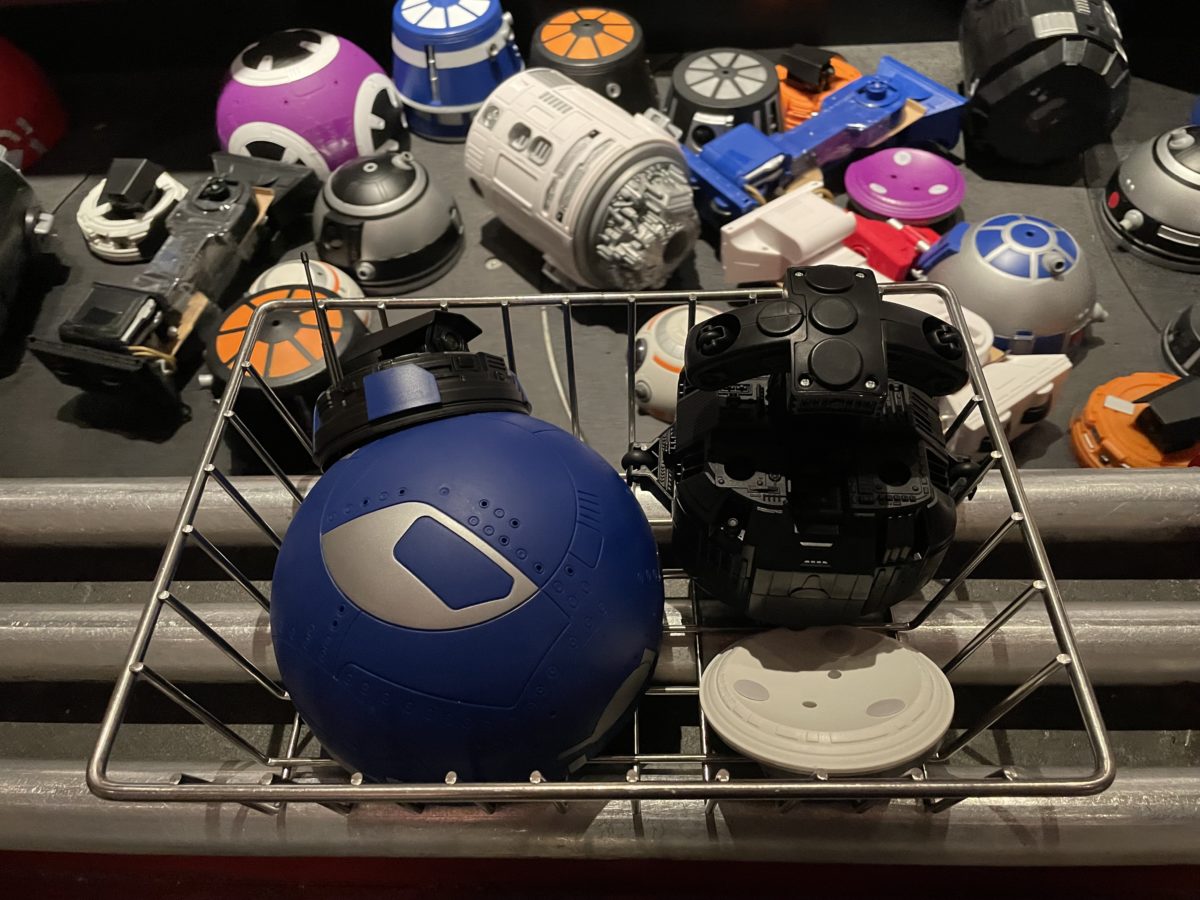 Once you’ve filled your basket, you’ll be directed to the assembly area in the center of the shop. The cast member there will walk you through the process, and how to put your droid together. In my case, since I built a BB unit, this is the area where I was given the two hoses that sit inside the droid, connected to the rolling mechanism. There are four color options for the hoses, but they’ll only be visible if you open up your BB unit, so there’s not as much pressure to be cohesive and match the outside. 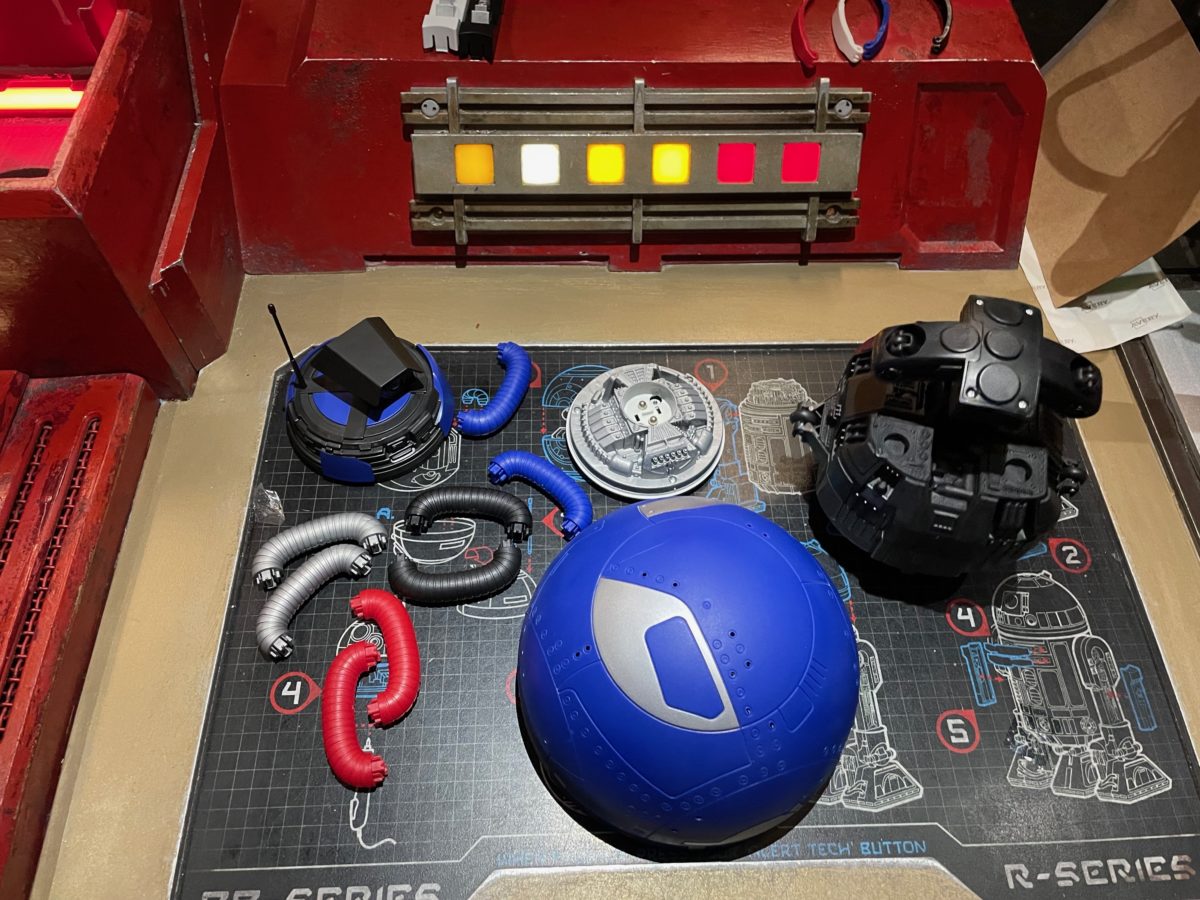 Then, I actually got to use the screwdrivers hanging from the ceiling and screwed on my droid’s head to its head connector. The head I chose had an antenna attachment, so I put that on and then moved on to the body. I attached the hoses, and then screwed the two halves of the body together, around the rolling mechanism, and attached the head magnetically. 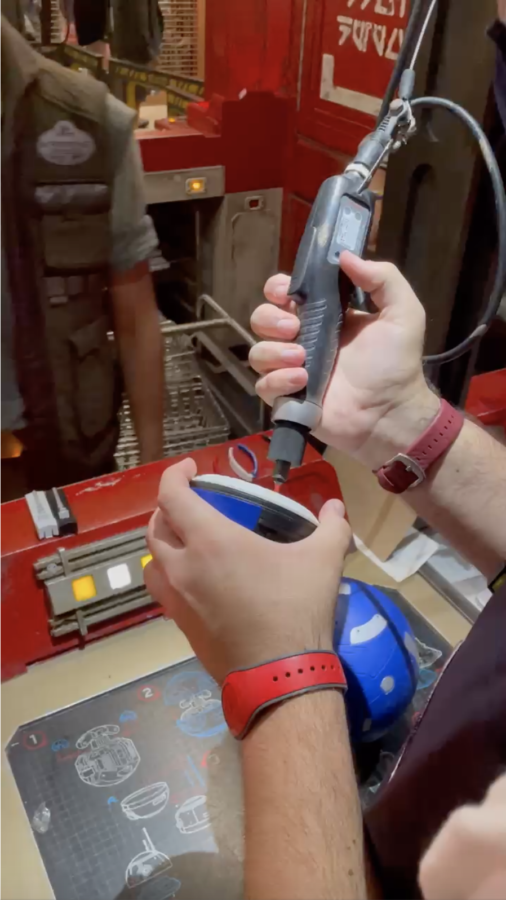 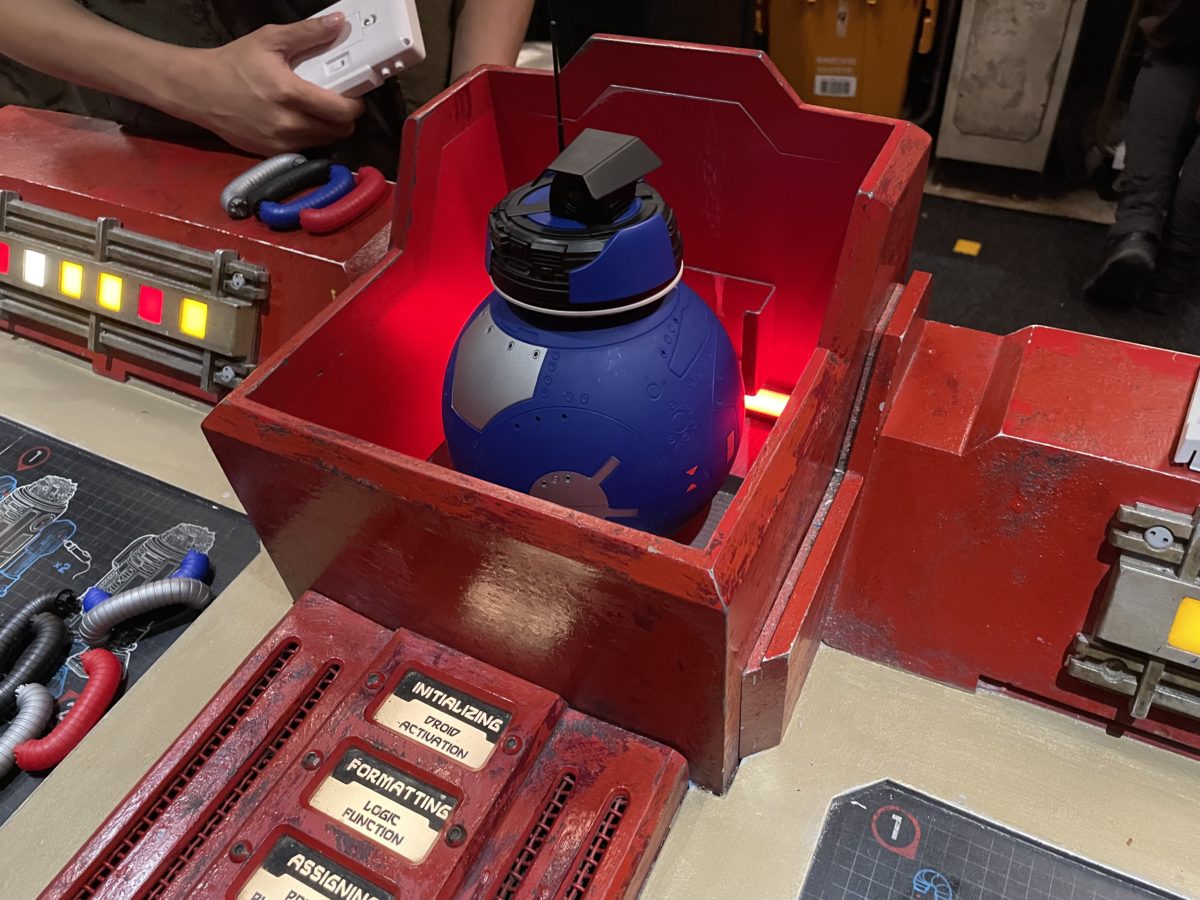 This experience was so much fun, and the building and activation process was especially exciting, because I got to see my droid go from pieces on a conveyor to an actual moving, talking entity.

After your droid is activated, you’re free to roam Batuu with your new galactic companion. If you choose to purchase personality chips, your droid’s “voice” and demeanor can change, such as a Resistance-chipped droid getting jumpy when you enter the First Order area, and vice versa. I chose not to get a personality chip for my droid, and I did not feel like I was missing out on anything at all. My droid came to life after I exited the land and came back, and even interacted with my friend’s droid, having a chirpy conversation when they were brought close together. 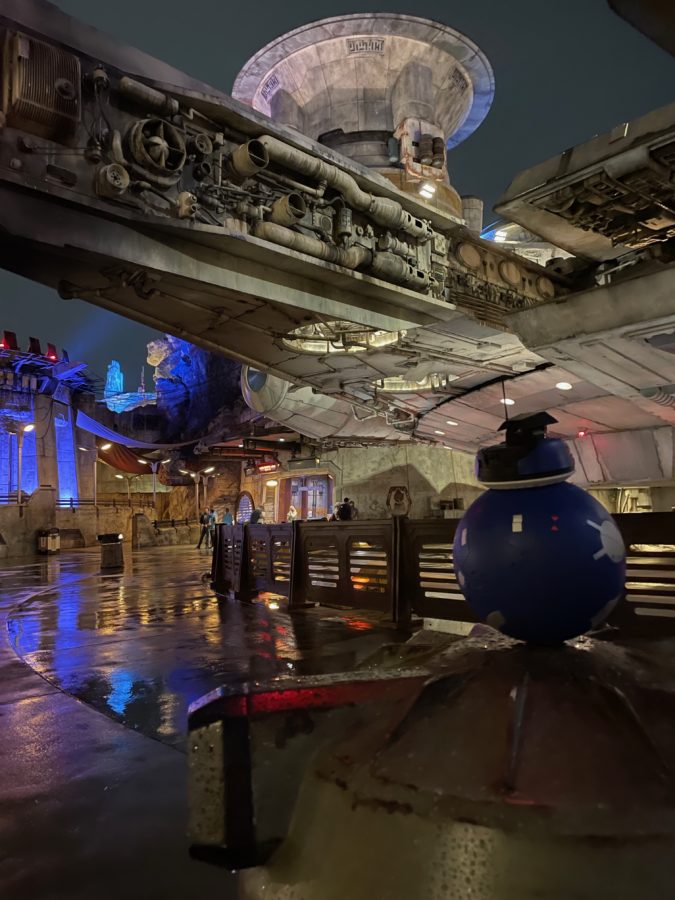 While I didn’t experience this myself, I have heard that the droids will dance to the songs inside Oga’s Cantina, so if you manage to get a reservation there it may be fun to build your droid first. Droid Depot previously offered special boxes to carry your droid around in, but at the time I visited, and I believe is still the case at time of writing, the droids are just being given out in the clear plastic Disney Parks bag. You can try emailing Disney Customer Service if you really want one of the boxes, and they may send you one. While I haven’t tried yet, I have seen people have success with this when Disney runs out of lightsaber carrying cases. 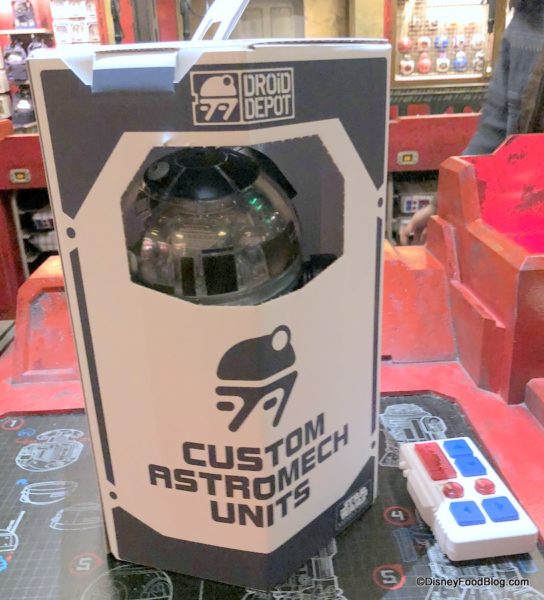 Along with the remote that you get with your droid to control its movement and sound, there is also a Disney-created Droid Depot mobile app that features some fun additions like programmable movements, a digital remote if you don’t like the complimentary plastic one, and a DJ R-3X dance playlist.

There are also areas in the land that are set up for meet and greets with fellow droids and droid builders! 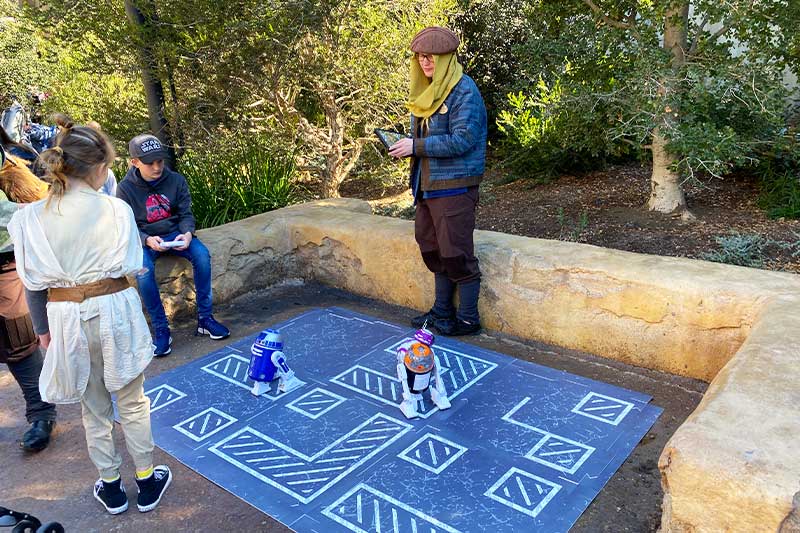 For me, my droid is similar to my legacy lightsaber I got at Disney Springs, it’s a display item that is very impressive to look at, rather than something I use on a daily basis. However, it is definitely fun every once in a while to turn my droid on and take him for a spin. Unlike the lightsabers, the droids are made out of plastic and not metal, but when they are on display, this is not obvious, and they actually have a very impressive appearance.

Depending on the body color you choose, your droid may be more prone to visible scratches and scuffs, which you may be okay with if you want your droid to have a weathered look, but if you prefer to keep your droid pristine, try and avoid bumping it into anything or using it on a hard surface. My BB-unit works best on carpet, but since the R-series have wheels as opposed to one large rolling surface, it may be different for that model. There are accessories you can buy in the shop portion of Droid Depot (more so for the R-units) including extra arms for the droids, backpacks to carry your droid, and the personality chips with First Order, Resistance, and Smuggler personalities. You can also find custom accessories on Etsy like display stands and even Mickey ears for your droid. 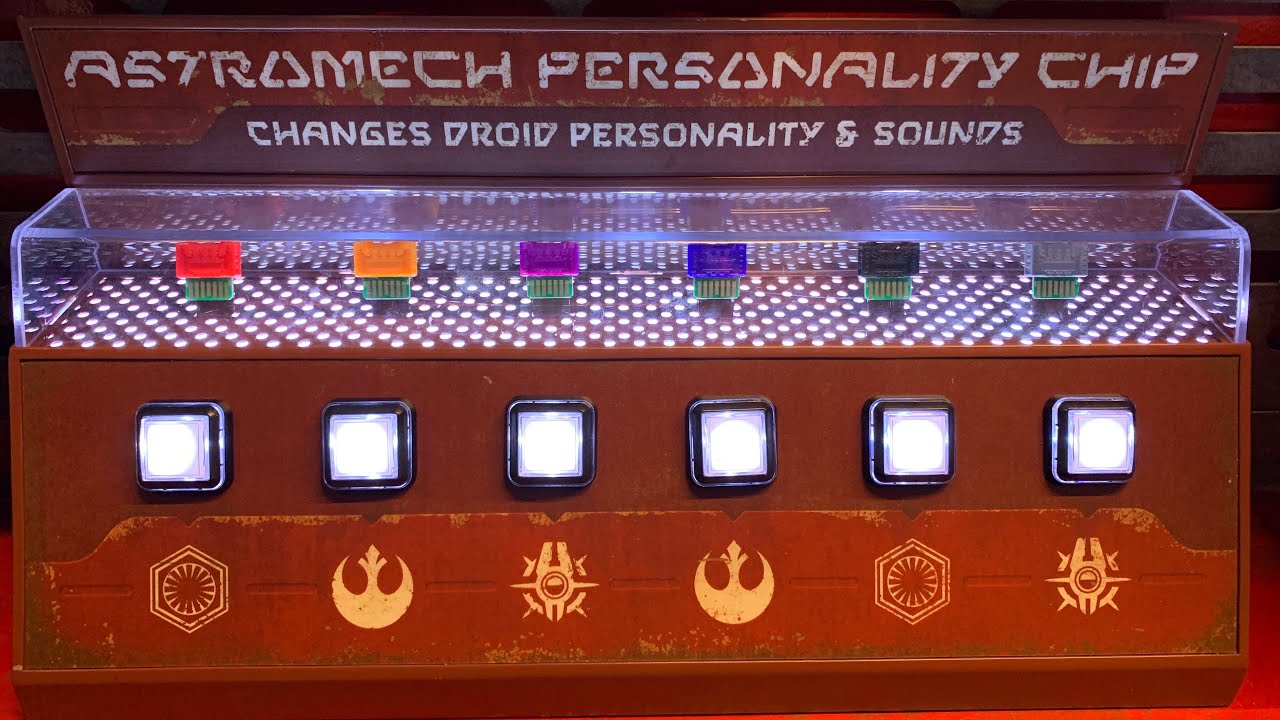 From Far Beyond Infinity

Overall, I think that the droid building experience is well worth your while if you’re looking to come away from Galaxy’s Edge with a custom Star Wars souvenir without breaking the bank with a lightsaber. For a first time visitor, this was a great way to commemorate my visit, and looking at this souvenir will always remind me of my first trip to Batuu. 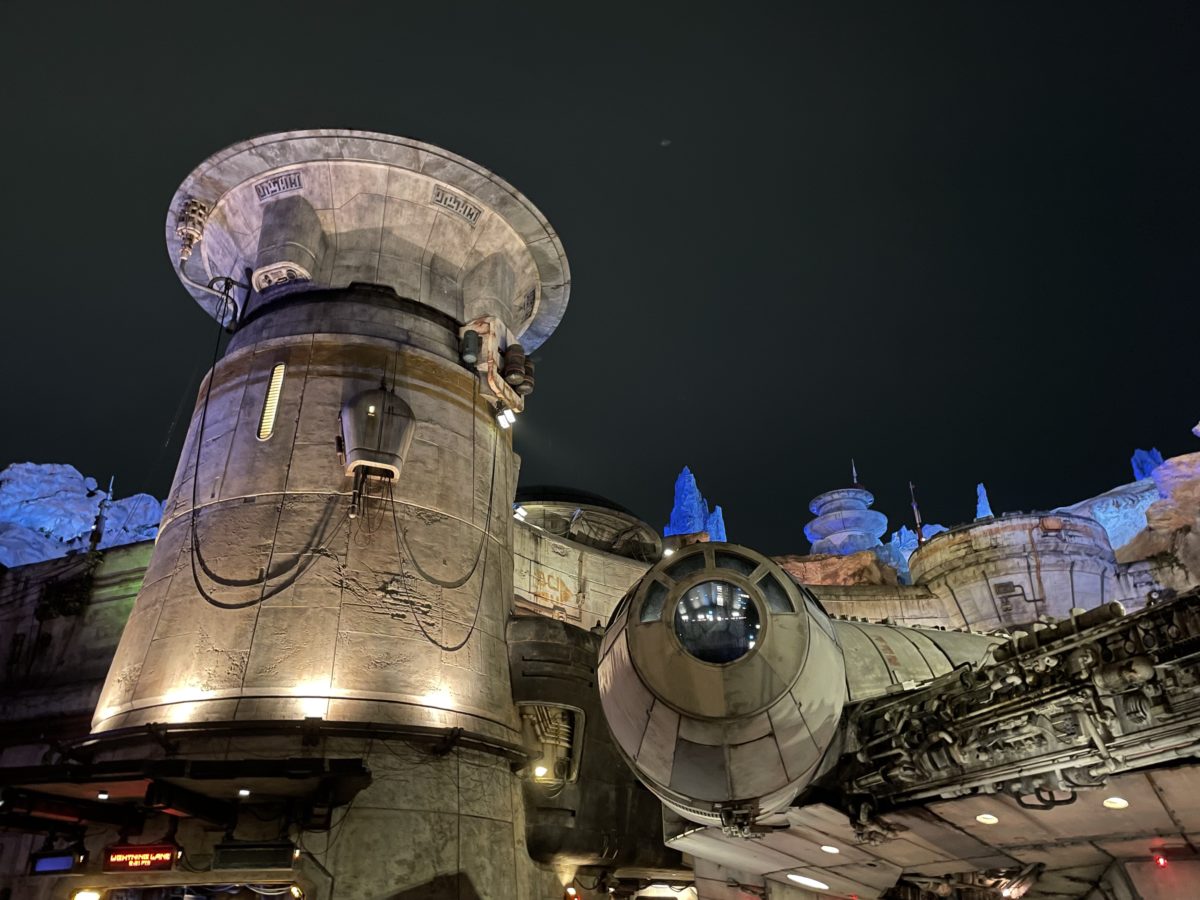 That’s it for part two of my in-depth Galaxy’s Edge review, make sure to keep an eye out for parts three and four of this series covering Millennium Falcon: Smugglers Run, and of course, Star Wars: Rise of the Resistance.

If you have built your own custom droid, we would love to see it, so post a comment down below telling us about your experience, or post a picture to social media and tag us @coaster101 so we can see your droid. Until next time, may the Force be with you. Or, as they say on Batuu, ‘til the spire!