According to the theme park, The Secret Life of Pets: Off the Leash is a “heartfelt experience that transforms guests into stray puppies as they journey to become loved and adopted.”

Universal Studios Hollywood provided a detailed description of the 64 animatronics riders will encounter on the attraction:

From blinking eyes to eye and eyebrow movements, from head tilts to head nods, from moving mouths to smiles, from ear curls to lip curls, from full torso twists to physically walking, the depth of mobility and function programmed within each of these loveable characters creates an experience unlike any other theme park ride.

The high-tech ride will use “hyper-realistic media” and projection mapping to immerse guests in a dynamic New York City landscape. Ride vehicles resembling cardboard boxes—like the one where film character Katie first finds her beloved Max as a puppy—will escort guests along a track towards a Pet Adoption event where they are adopted and find their “forever home.” 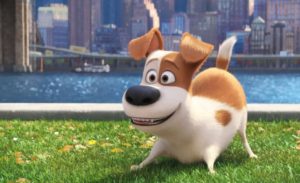 The Secret Life of Pets: Off the Leash will feature “state-of-the-art optical enhanced gesture-tracking technology, which helps to identify each guest as a unique stray puppy for the duration of the ride. With an option to be transformed into one of 15 stray puppies, guests will enjoy a unique experience each time they ride.”

The ride will also use “Virtual Line” (VL) technology, which will help guests maximize their time in the park. Guests can access VL via the official Universal Studios Hollywood app (available on the App Store and on Google Play), or they can visit the VL kiosk located in the New York City subway station replica next to the ride. The apps and the kiosk all provide guests with options to experience the ride based on the next available times and will be accessible to guests within the theme park as needed.

VL will complement the attraction’s non-traditional queue, which invites guests to explore the Secret Life-inspired area freely until they reach the ride’s boarding station.

The Secret Life of Pets: Off the Leash will open in a section of the park called “Pets Place,” previously known as Baker Street that is adjacent to the “Despicable Me Minion Mayhem” and “Super Silly Fun Land” attractions. The exterior of the ride’s show building will be clad with New York City-inspired storefront facades, capturing the essence of a bustling NYC street. A subway station-inspired building will serve as the in-park location of the VL.

The ride features original voice talent from The Secret Life of Pets films who will reprise their roles for attraction.