Talking Kids & Coasters with The Dad

Chances are if you are on social media, you’ve seen a few of The Dad’s hilarious memes on fatherhood and the roller coaster ride that raising kids can be. What you may not know is that the Executive Editor of The Dad, Joel Willis, is an amusement park fan himself and we caught up with him to talk kids and coasters. 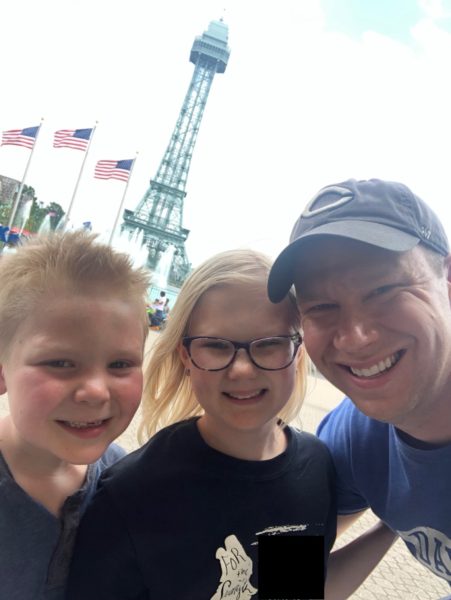 C101: Can you give us a little background about how you came to enjoy amusement parks as a kid?

Joel: I practically grew up at King’s Island. All my summers were spent there. Especially when I was a teenager. We’d get dropped off in the morning and spend the whole day there and get picked up later. It was great. When I was very young, I remember wishing myself to be taller so I could ride the bigger coasters. I remember riding on the Racer with my dad. 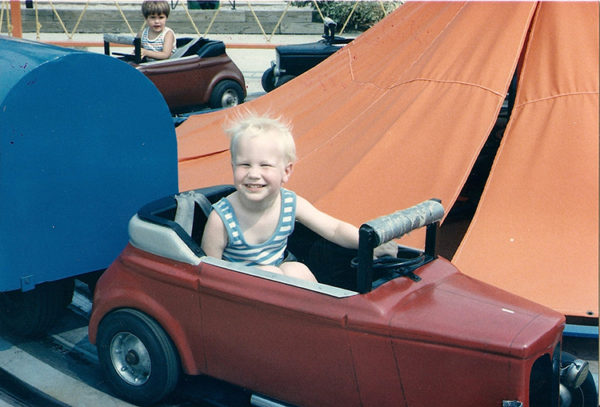 Joel as a kid, at the now-defunct Americana amusement park.

So now that I have kids of my own, it’s the best to get to experience that with them and see it fresh through their eyes. It’s impossible to ride a good rollercoaster without smiling. 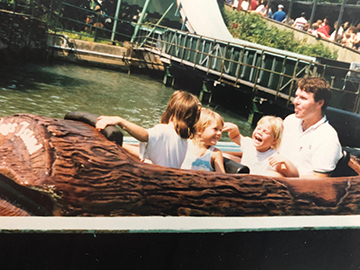 Joel’s wife, Laura, with her dad at Kings Island.

C101: Did you have to persuade your kids to go on rides with you or did they also have a love for it?

Joel: We went to the park the first time they were very little and we went to kiddie land. It was pretty boring (for me) and not really worth the money. Now they’re old enough for the big rides and it’s a blast. It took a little persuading at first and now they’re in completely. We have season passes. We go, we have a blast, and I like to think we make lifelong memories they’ll look back on and cherish when they’re parents themselves. 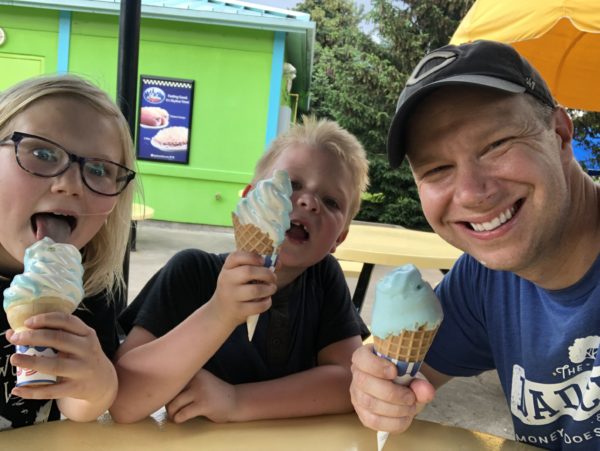 Last year on the last day of school, I picked my kids up at the bus stop and told them I had a surprise, I was taking them to a park. They were like “Oh okay, cool, I guess.” Then I said: “AN AMUSEMENT PARK! WE’RE GOING TO KINGS ISLAND!!!!” And they went absolutely nuts. It was the best. We got there around 4 p.m. and there were no lines. We had sooooo much fun. I’d like to think they’ll never forget that day. I know I won’t.

C101: What were some of your favorite rides growing up? And what was it like for you to experience those rides again with your kids?

Joel: Kings Island has some all-time classic coasters…The Beast, Vortex, The Racer. I loved all of them. Vortex was probably my first upside-down coaster. So it was great for it to be my kids’ too. There’s something about going upside down that is thrilling and scary. They were terrified. But after riding they were hooked.

Vortex will beat the crap out of you. I remember as a kid hitting my head against the shoulder rests. Which is funny now that my head sticks out above them. It’s especially sad because they just announced this was the last year for Vortex and it’s being retired. I’m just glad my kids got to experience it. RIP Vortex. 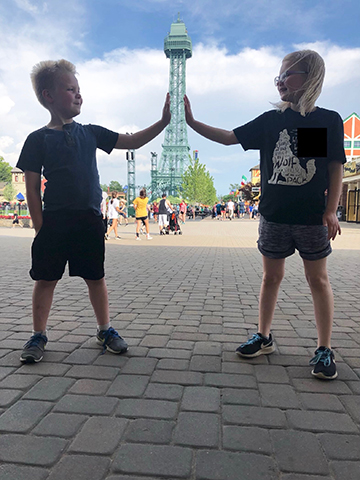 C101: What do you miss most about Kings Island from when you were a kid? What do you like better about the park now?

Joel: Back in my day, The Racer had one that went forwards and one that went backwards! Last time I was there, I heard a lady ask where the backwards one was and I had to be the one to tell her they don’t have it anymore. She was devastated and I was heartbroken to have to be the one to ruin this stranger’s day. They also had a miniature version of The Beast in kiddie land called The Beastie. I thought that was so cool as a kid too short to ride the real one, to be able to ride on a smaller version of the big guy. Sadly that’s gone too. 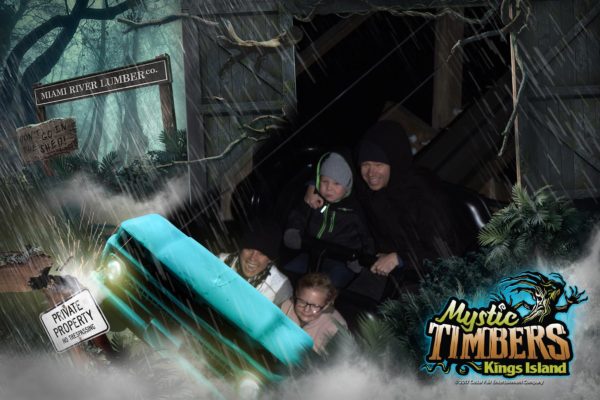 The classics are still there, and they even have the blue ice cream! King’s Island is great because it has so much range. It has elements of nostalgia but also ultra-modern expensive thrill rides. There was a stint where Kings Island was owned by Paramount and they named rides after movies. They’ve since renamed, but some of the names have stuck… Face Off, Top Gun, Drop Zone. We’ll always call Invertigo “Face Off”. Just can’t stop.

C101: Do you think Kings Island is better for kids now?

Joel: Kiddie Land is still iconic. Now it is called Planet Snoopy I guess? But it’ll forever be Kiddie Land to me. 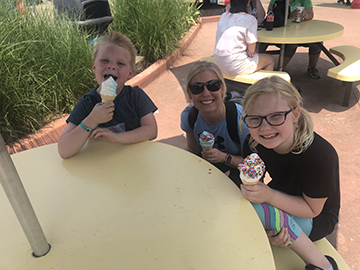 I don’t know about better. It was great for kids when I was a kid and still is now.

C101: When you are at the park, does your family head for Skyline chili or LaRosa’s pizza?

Joel: If we eat in the park, we usually hit up LaRosa’s. I swear the pizza tastes different at Kings Island. It’s also a heckuva lot more expensive of course. Now that we have season passes and we live pretty close, sometimes we swing over, ride 5 or so rides, and head out. So in that case, we just go to Skyline on the way home. 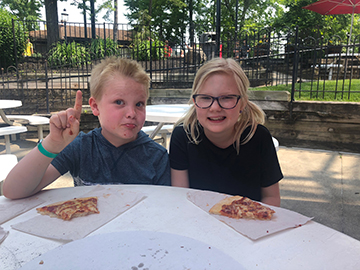 Kings Island, Larosas, Skyline — if you can do all three in one day it’s the perfect Cincinnati trifecta.

Joel: We went to the Magic Kingdom in 2016. I expected to hate it to be honest. I don’t love large crowds and lines. We ended up LOVING it. My daughter said it was one of the best days of her life. It was just so clean and well organized. We were able to schedule our FastPass rides and get on pretty quickly. It was nice. 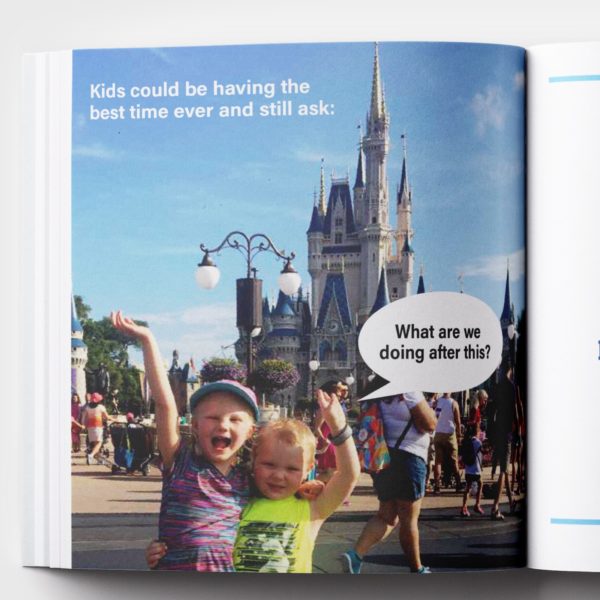 I’d still rather go to Kings Island as an adult though. The big coasters are just so much better. Kings Island has stuff for kids too, but the experience as an adult is better. And as a Cincinnati native, I can take my kids on a weekday right when they open and completely avoid any big crowds. 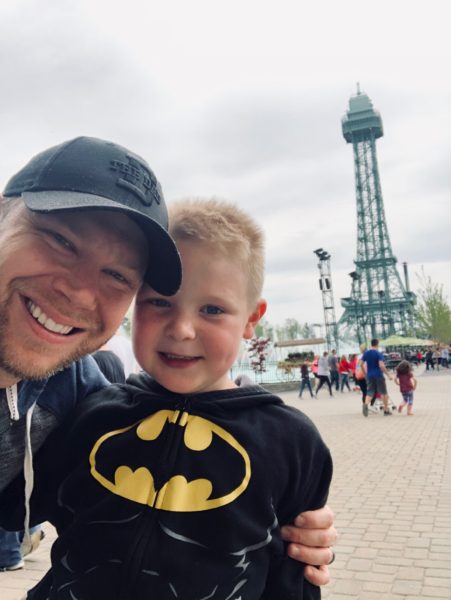 C101: Do you have any go-to tips or dad hacks for visiting parks with kids?

Joel: My wife would say “bring a water bottle.” She doesn’t leave home without it but it’s especially nice to have in the park and refill it and stay hydrated.

She also takes Dramamine. As a kid, I NEVER got motion sickness. Ever. But apparently getting old is kind of the worst? I’ll never forget one time I rode the viking ship and mid-ride I felt like I was going to throw up. I had to go lay on a bench after. It doesn’t happen to me often but sometimes it hits me. So Dramamine for the old folks like me, I guess.

I also think if you’re trying to get your kid to ride a big ride, it’s helpful to just play it cool. Don’t overhype it or it’ll freak them out more. Try to avoid talking about it as much as possible. At least for my kids, that’s helpful. And then once they ride it, they love it. We also try to do “one new ride per visit,” and that’s helpful for keeping the park fresh and getting new experiences as they grow up. 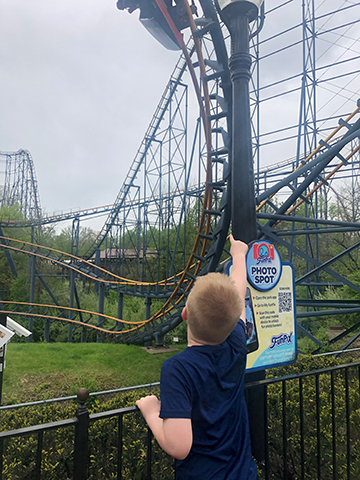 C101: There are many mixed feelings when it comes to the recent news of Vortex. What are your thoughts on Vortex leaving and Orion coming? And what would you like to see take the place of Vortex?

Joel: The last time I rode Vortex when we were going up the hill I looked over and saw some rust on one of the big support pillars and wondered how they could maintain that? It’s not the kinda thing you can just paint over. And it wouldn’t be easy to replace the metal beams. So it makes sense to me that they need to retire it. Gotta keep it safe.

But still, it was the first upside coaster I rode, and my kids’ first. So I’m really sad to see it go. When I read the news I audibly gasped, “noooo!”

Vortex made great use of a tight space (9 loops!). Not sure they could replace it with anything too massive with similar thrills. But I’d love it if it was something with equivalent upside-down moments and excitement.

My kids are fired up about Orion. I hear it’s the tallest, fastest, longest in the park? That’s cool. I did see the simulation on YouTube and I was honestly kinda…disappointed? I mean the hill looks AMAZING. I’m excited about that, but the rest of it looked a little generic to me, down and back. Kinda like the racer with a massive hill. I look forward to being pleasantly surprised!

C101: Do you ever travel to other parks in the area, such as Kentucky Kingdom, Holiday World, or Cedar Point? Which is your favorite?

Joel: Yeah! I went to Holiday World with my wife’s sisters and parents a few years ago and was really impressed. It’s in Santa Claus Indiana, with…not much around it. Their water park was pretty awesome. I waited in line for The Voyage for a looooong time expecting a generic wooden coaster and was blown away by it. So much air time and I was smiling like a fool the whole time. It was a blast. And we stayed in a nearby park with cabins and drove around in a golf cart and had campfires at night. Good times. 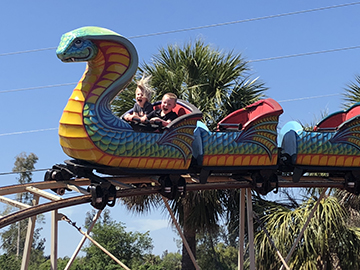 C101: Since we are Coaster101.com, we have to ask, what is your all-time favorite roller coaster?

Joel: Ahhh tough question! I was an avid coaster rider from 1990-2001 or so. Then I retired while I was in college and until my kids were old enough to ride. Now I’m back in the game!

I’d say my favorite classic is The Beast. The roaring tunnels at the end are the best. It sounds like a literal beast. Unlike any other coaster I’ve been on. 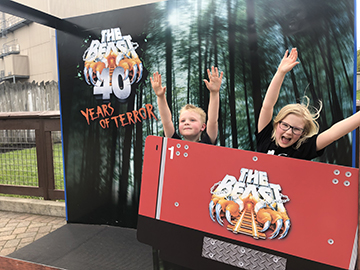 My favorite modern coaster is probably Banshee. When I rode Banshee for the first time I was just amazed at how far coaster technology had come. I was like, ohhhh so this is what a modern coaster is all about. It was like the Vortex but way faster and smoother. Most of the time I didn’t know if I was upside down or not. I guess at $24 million, you get what you pay for.

We would like to thank Joel for taking the time to answer our questions and give us some good advice for tackling amusement parks with kids!