Earlier tonight, on their official blog, Kings Dominion announced that Volcano: The Blast Coaster would be removed. 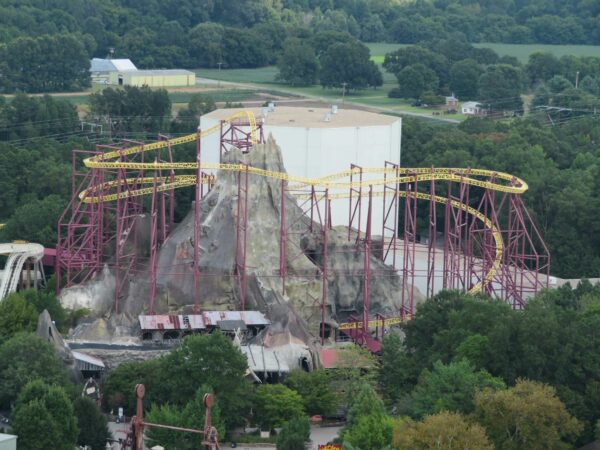 According to Kings Dominion, the closure revolved around the inability to keep Volcano: The Blast Coaster up to the park’s high reliability and guest satisfaction standards.

Part of getting ready for a new operating season includes an expert evaluation of our rides and operations. As a part of that evaluation, every aspect of our rides and attractions are analyzed, from guest satisfaction, throughput and rider capacity to reliability, uptime and maintenance. After thorough evaluation, the decision has been made to remove Volcano: The Blast Coaster. This wasn’t an easy decision for us, because we know that people love this one-of-a-kind coaster; however, over time it became nearly impossible to keep the ride up to our high standards of reliability and guest satisfaction, and for these reasons we had to make the tough call. We apologize to anyone who is inconvenienced by the removal, but hope they will understand that it was done to enhance the overall guest experience here at Kings Dominion.

Volcano, the first inverted roller coaster to feature a LIM (Linear Induction Motor) launch, opened at Kings Dominion in 1998, and was built by Intamin. It resided in a man-made “Volcano” structure that was formerly “Smurf Mountain,” and prior to that, “The Lost World.” The coaster’s four inversions featured three heartline rolls, and a 155′ “roll out” inversion out of the top of the Volcano, which was at one point the tallest inversion on a roller coaster. It reached top speeds of 70mph.

We don’t know the exact details on why Volcano is being removed, but check out our explanation of some of the reasons behind coaster removals.

This story will be updated as we have more information.

Are you sad to see Volcano go? Let us know in the comments below!