Secrets Behind Shanghai Disneyland’s Pirates of the Caribbean

Move over Spider-Man. Move over Forbidden Journey. There’s a new contender for most immersive theme park ride ever built. Shanghai Disneyland’s Pirates of the Caribbean: Battle for the Sunken Treasure is a new take on the beloved, classic boat ride.

Rather than simply duplicate the Anaheim original, Walt Disney Imagineering has worked their magic by creating an innovative ride system and a compelling narrative drawn from the Jerry Bruckheimer film franchise. It’s sure to be the marquee attraction of the brand new, multi-billion dollar theme park. In fact, it’s rumored that POTC is the second most expensive attraction at SDL behind the Enchanted Storybook Castle.

Shangai Disneyland hasn’t had their official grand opening yet, but they’ve had a few soft openings. And videos from these sneak previews have already been unleashed upon the internet. The one video that blew me away above all others was the first on-ride POV of Battle for the Sunken Treasure. If you don’t mind spoilers, you can watch the video below.

Spoiler Alert: If you don’t want to know how the magic is pulled off or ruin any of the ride’s surprises then do not read this.

Update: Check out this longer, better PoV than the first one we had here.

How Pirates of the Caribbean Works

After watching the on-ride video of POTC, your first thought may have been the same as mine:

I have no inside knowledge about how the ride actually works but based on my knowledge of the industry combined with Google and YouTube research I think I have a pretty good idea. First, let’s start with the layout of Battle for the Sunken Treasure (source). I think this layout is accurate as you can compare it to the Google image below of the attraction when it was under construction. 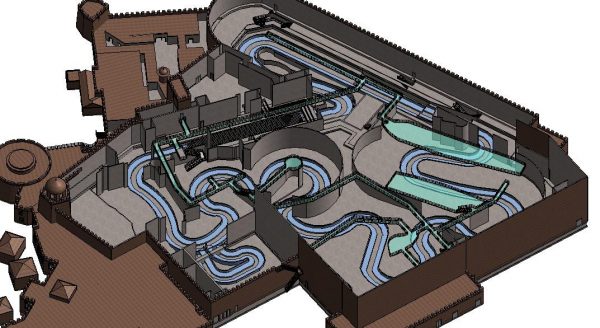 I will explain the layout in more detail later but first we need to understand how the ride system works. Fortunately, we know quite a lot about how it works thanks to the patent Disney filed in 2012. If you don’t enjoy reading patent descriptions, I’ve summarized it for you. What makes the technology so incredible is the engineers have complete control over the speed, position, and orientation of the boats. 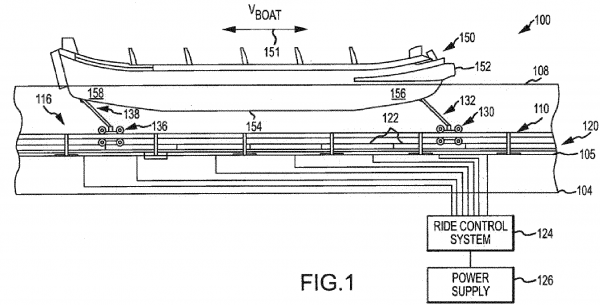 Now remember, many of Disney’s classic boat rides are powered by water flowing through a channel so the speed of each boat is different depending on a number of hard to control variables like total number of passengers, their weight distribution, etc. Other problems include timing show scenes to each boat, boats bumping into one another, and the huge amount of energy required to pump all of that water. 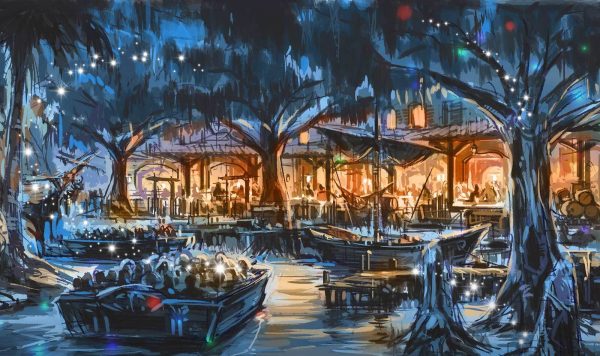 The Shanghai Pirate ride has solved all of these problems and more: the boat can travel forwards, backwards, and sideways. It can speed up or slow down, can maintain boat to boat spacing, and can synchronize show elements exactly to the boat. Oh, and it can go up and down hills and drops too! Pretty sweet, huh? More on the drops later. 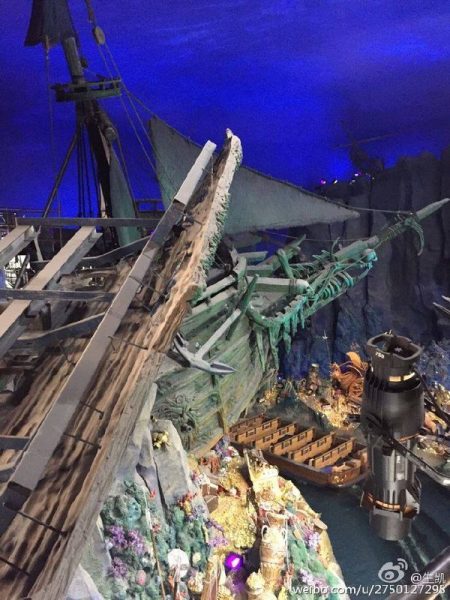 The Imagineers are able to accomplish all this because the front and back of each boat is tethered to a bogie which is connected to a track hidden under the water.  A metallic plate, or permanent magnet, is mounted to each bogie and interacts with electromagnets (LIMs or LSMs) to control the speed of the boat (perhaps supplied by a company like MagneMotion, Inc. of Devens, Massachusetts, USA). A linear motor such as an LIM or LSM is generally an electric motor with a linear or unrolled stator so that instead of producing a torque it produces a linear force along its length that is proportional to the current and the magnetic field. Now the engineers have the ability to start and stop boats at any time if a problem is encountered and the ride control system (RCS) can prevent two boats from bumping into each other, especially when there is a hold up in the station. The ride appears to pause in the video around the 6:13 mark. 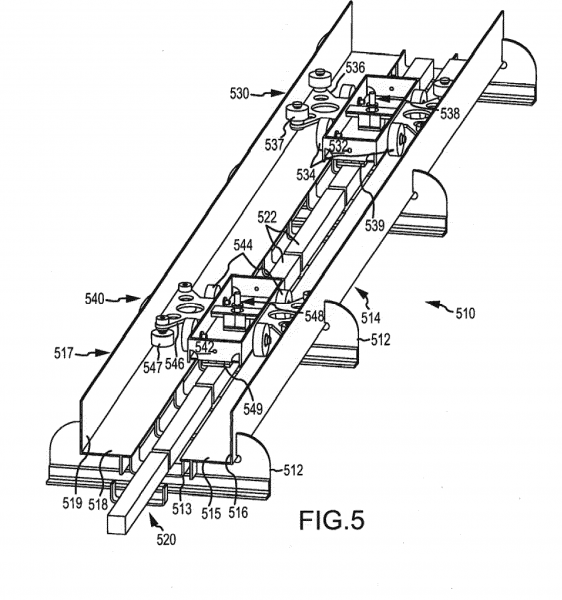 The orientation of the boat is controlled by the tracks. The track begins with a single rail with both bogies traveling down it, then the track splits and the front bogie follows one track and the back bogie follows the other. This is how rotation is achieved. 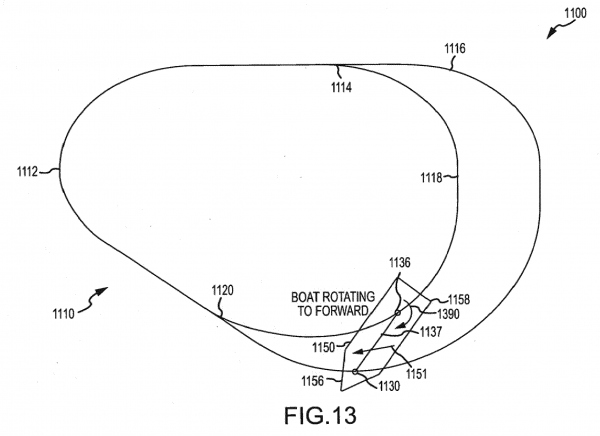 You can see in this construction picture from ThemeParX the location where the track splits as you get to the end of the physical pirate ships: 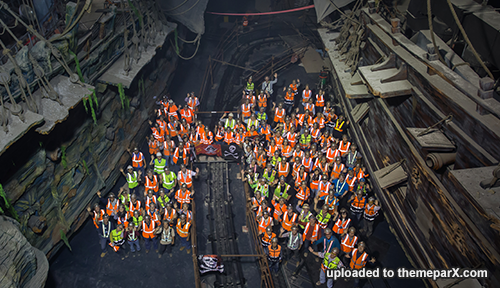 Pirates of the Caribbean: Battle for the Sunken Treasure is more energy efficient than earlier systems that use pumps because they only have to apply energy to move the boat, not the entire body of water. Another advantage is you can design the ride path to allow boats to flow through a lake,  you don’t need a predictable channel to follow. 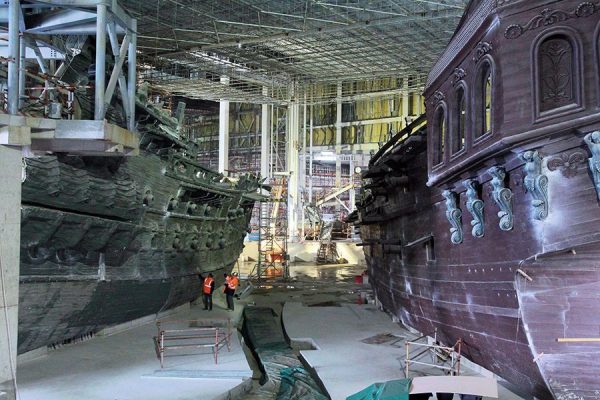 Here’s the Pirates of the Caribbean layout again, only this time I’ve labeled some areas and drawn arrows to depict the orientation of the boat based on the one YouTube video. 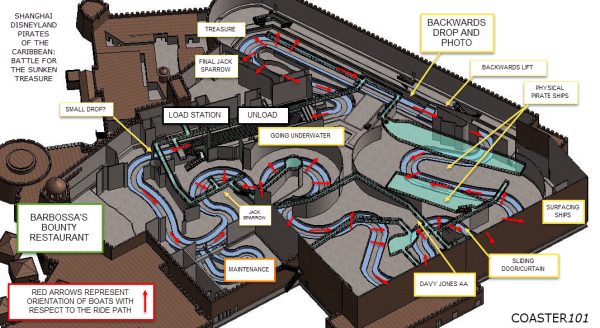 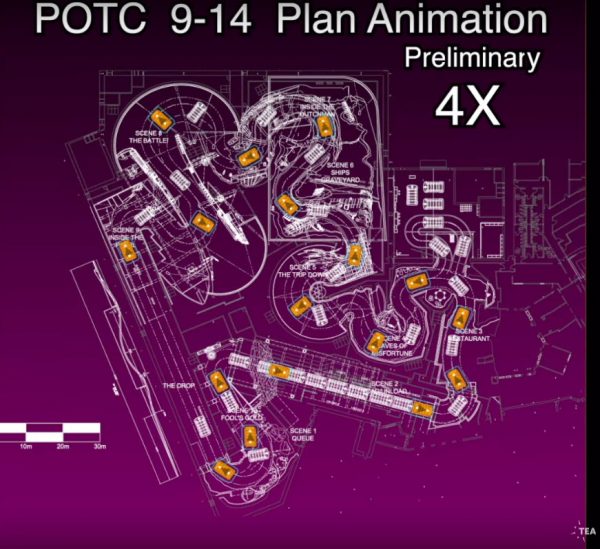 Battle for the Sunken Treasure is primarily a media based attraction that uses a combination of physical sets, audio-animatronic (AA) figures, and giant projection screens to help bring the story to life. There are moments where the real water that supports the ride vehicles matches up with the level of the ocean’s surface on the projection screens.

One of the problems that major themed attractions featuring projection screens all  have to tackle is if the vehicle is almost constantly moving, how do you keep the guests in a scene longer than a few seconds and still keep capacity up? Harry Potter and the Forbidden Journey solved this issue by using a complicated system of projecting video on a dome that is rotating in a small circle that the ride vehicle has to perfectly synchronize to by traveling in a larger circle around it. Pictured below is the dome carousel from the Forbidden Journey rides: 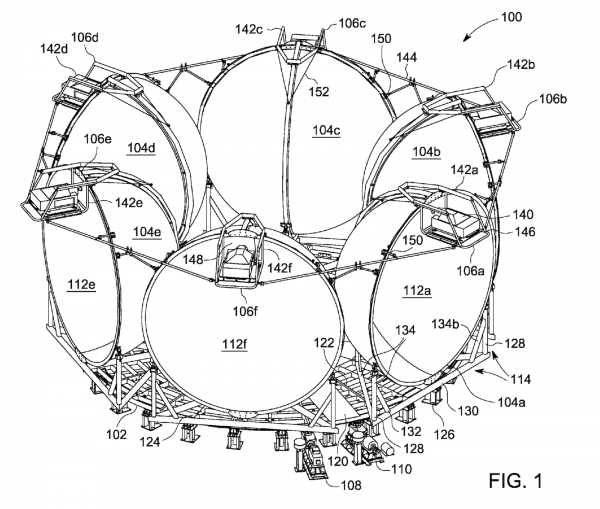 Battle for the Sunken Treasure instead uses huge projection screens that are curved but stationary. The ride vehicle rotates to face out towards the screen while traveling in a smaller circle on the inside of it. 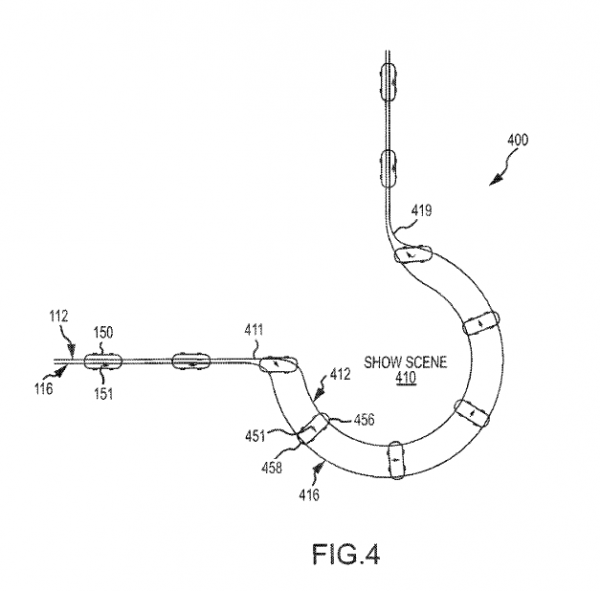 The POTC ride system actually shares a lot of similarities with Escape from Gringotts at Universal Studios Orlando. The ride vehicle in both Pirates and Gringotts has a rotational degree of freedom to point the guests in exactly the direction the show designers intend them to be at all times. Both rides can also negotiate hills and drops and they both use motors (drive tires in Gringotts case) to be pushed along the ride path. The one advantage Gringotts has over POTC is the motion-base track elements (three of them to be exact).

I am also assuming that the squinching technique pioneered on Spider-Man is in use here on the projection screens. Because the audience is in a specific and changing position with respect to the projection screens, squinching, or moving point of convergance, is a technique that digitally pre-distorts the image on each frame to compensate for the perspective angle of the audience’s view of the screen. This makes the screen appear to be a window on the virtual world rather than a screen onto which the CG world is projected.

It amazes me how well everything on the ride is synchronized. There is on-board audio that times up perfectly to audio from the sets, not to mention all of the video segments that much match up perfectly.

One of the biggest draw dropping moments on Shanghai’s Pirates is when a skeleton magically transforms into Jack Sparrow:

This one is a bit tricky. I’m not sure exactly how it works but there’s no doubt the lighting plays a key role. Here’s how I think it’s done (could be totally wrong here). I believe the main effect here is a new take on the Pepper’s Ghost effect used in classic attractions like the Haunted Mansion. The scene begins with low light and I believe the edges of the physical set are hiding a piece of glass angled at forty-five degrees. The actual skeleton is on the opposite side of the glass as the Jack Sparrow AA. When the AA is dark but only the actual skeleton is lit, the skeleton is reflected on the glass. Since the Jack Sparrow animatronic is extremely dark, they put projection mapping over it to make it seem like the skeleton has ghostly particles around it. However, when everything else is lit except for the skeleton, the Jack Sparrow AA figure seems to magically appear. Genius.

How big is the drop on Shanghai’s Pirates of the Caribbean?

The finale of Battle for the Sunken Treasure is a backwards drop into darkness. We don’t know the exact dimensions but is probably pretty comparable to the other pirate rides i.e. not very big at all. In the video, the up motion only lasts a few seconds. Maybe only a length or two of the boat. In case you were wondering, the drop occurs around the seven minute mark in the video posted above. Did you notice it the first time you watched the POV video? Here’s a screen grab looking backwards down the lift right before it drops. 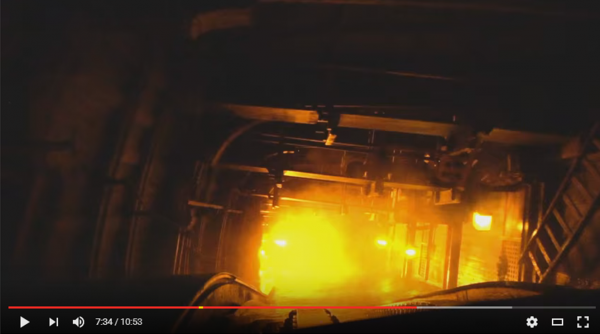 Here’s a side view of the drop profile:

And here’s a view of the final lift into the station. It appears both lifts use conveyor belts to carry the boats up. 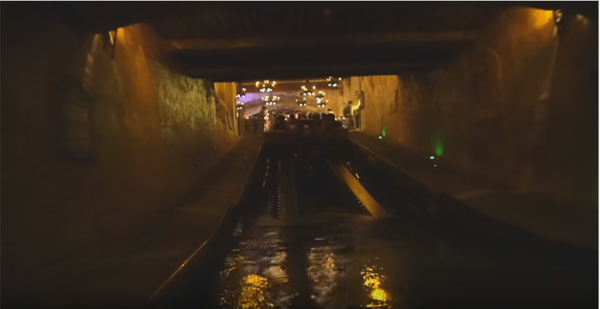 It appears there is a very small drop at the very beginning of the ride where the boat drops from the station into the water. You can also see the rail(s) in the center of the channel.

Projecting the Future Use of the Technology

With Battle for the Sunken Treasure, Disney finally has a ride system to rival the versatility of the robotic arms found on Forbidden Journey (assuming future versions don’t necessarily need water to support the weight of the vehicles). Going forward, imagine Walt Disney Imagineering using this type of technology in future projects, like the Star Wars Experience. In the scene where you pass through the two pirate ships, replace that with the Death Star trench, and turn the pirate ship battle into X-Wings and tie fighters. How cool would that be?

I do not think Disney will use this same ride system on the upcoming Avatar boat ride at Animal Kingdom but I hope I’m wrong as I would love to see it here in the States in any form. I also wonder if we will see some of the same projection screen effects used on the Frozen boat ride coming to Epcot. They could use the part where the boat is reversed from forwards to backwards to keep you pointed at a screen for a longer duration. 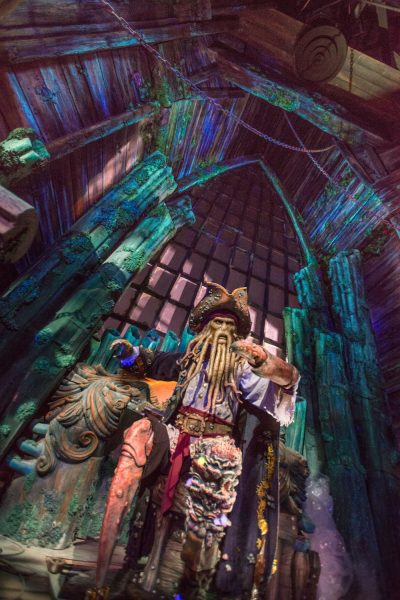 I hope you enjoyed this breakdown of how Pirates of the Caribbean works. Check out our other in-depth articles on Hogwarts Express and Escape from Gringotts. What ride should we analyze next?