With Fury 325 and a new Slingshot attraction rising above the Carowinds horizon, not to mention a calendar full of new and exciting events for this season, Carowinds needed someone to cover all these momentous occasions. Enter Chris Cullen, who won Carowinds’ “Thrill Caster” Contest. Chris has been in banking since 2007, however his true passion is entertainment, whether its voice overs, acting, improv or stand up comedy. Chris took some time to tell us a little more about his role as Carowinds’ 2015 “Thrill Caster.” 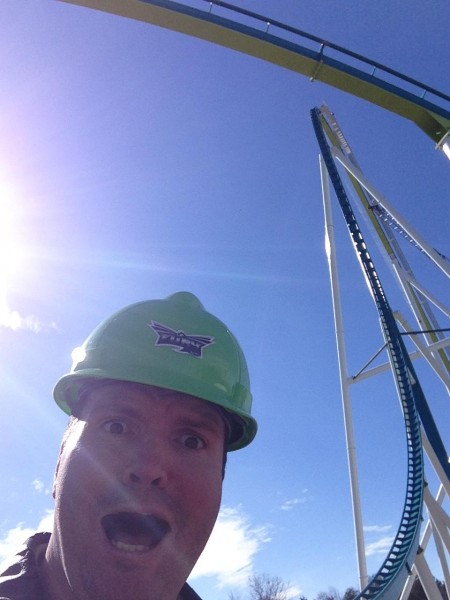 C101: What was your first thought when you saw the Carowinds “Thrill Caster” Contest?

Chris Cullen: Honestly I was excited about it because it was a cool opportunity for whoever won it. I slacked in getting my video in because human-nature kicked in and I said “what’s the point they probably already have a winner picked out”…..finally the last day possible for submissions my wife and I were sitting on the couch in December and she says “just submit something, you have nothing to lose”….she was right. I grabbed some on-ride photos from various theme parks (Disney, Busch Gardens, Universal and of course Carowinds) and just talked in front of my Christmas tree for 3 straight minutes, no script, no rehearsal, no do-overs. I sent it in a couple hours before the deadline. When I got the call I won, I literally cried. I can’t explain the excitement for such an incredible opportunity!

C101: How long have you been visiting the park?

CC: Since early 2006. I still remember riding Night Hawk when it was The Borg, I have the on-ride POV video on Top Gun still. It’s funny, I remember vividly coming to Wingate for a recruiting trip in 2005, I was still in high school, and as I am going through the table pamphlets and brochures in my hotel, I see “Paramount Carowinds” being advertised. I still remember like it was yesterday yelling to my dad “THEY HAVE A THEME PARK HERE?!?!” and we were so excited. It’s actually one of the reasons why I selected Wingate over the other schools recruiting me at the time. Big city, close to mountains and beaches, 1 day drive from Florida and a Theme park. I grew up going to Disney and Universal, so that was a BIG deal for me!

C101: What is your favorite Carowinds memory?

CC: It has to be riding the Intimidator the day it opened. We were in line as the Earnhardt’s took the first ride up. We had sweaty palms, knees clicking together! The biggest coasters I had really been on at that point was the Hulk and Dueling dragons. This thing made Space Mountain look like a carnival ride! We rode it something like 20 times that season (Gold passes woot woot!)….such a great memory!

CC: If you’ve ever watched Samantha Brown traveling to Disney or Theme parks in general, it’s a mix between that and “Diners, Drive-ins and Dives”. I am going to be doing everything from interviewing head of maintenance with behind the scenes looks on what goes on with our favorite rides when the gates are closed, to a food sampling with our executive chef, trying things that will be on display throughout their new Taste of the Carolina’s events, Scarowinds, video montages, on ride POV footage with guests, interviewing guests etc. Honestly I have been given fantastic amount of freedom and my camera/editor/director Chris is on the same exact wave-length with me, so we are going to churn out some incredible and FUN stuff this year!

C101: What do you friends and family think about your new position?

CC: They are all excited….and really not so surprised. My parents have videos of me dancing in ridiculous costumes trying and failing to do “the worm” in our living room as a teenager. They have seen me do improv comedy on stage, heard me on the radio while interning, my friends have memories of me making everyone laugh while making up lyrics to songs on the school bus etc. I have always had a passion, and a real keen sense at my humor, but I think my biggest gift was being able to KNOW when to turn it on. Teachers throughout school were always so thankful when I knew when to turn it off and let them have the floor, it was a respect thing of course, but once lunch came around and we were free to mingle, the lights came on in my head!

C101: What do you feel is a hidden gem or the most underrated attraction at Carowinds?

CC: Such a tough question, I don’t even know if it’s underrated but I really love Carolina Cobra. It has such a cool…different feel to it. I love the restraints, and I love being pulled up backwards and waiting, anticipating the sweet sound of release as it CLICKS and lets you go! I always feel woozy afterwards, I love that! Also, coming from Florida where you pay extra for it….having a water park attached is a really nice thing to have when you have a small child on hot summer days!

C101: What is your favorite roller coaster, at any park in the world?

CC: So I went to Busch Gardens Williamsburg a couple of years ago…..Griffin was INSANE! I loved it. We made it a point to NOT read up on any of the coasters, or watch any youtube videos, we wanted to experience the park for the first time and be surprised. We had some lightening delays and rain, and waited HOURS for Verbolten……..oh man, it was so worth it! I had no idea what was coming and was SO impressed. Blew us away! And of course, my old favorite like Ric Flair says…..oldest ride in the park…..still has the longest line WOOOOOOO! Space Mountain baby!

CC: Insane. Yesterday I wrapped filming episode 2, and we had a sweet opportunity to go right up to the bottom of the first drop….we filmed a little segment, and I had a chance to just stand there and take it all in. The pictures….the drone videos…..the go-pro videos…..they do this thing no justice. I am telling you, it is a game changer. To even fathom that its 100 feet taller than the Intimidator, just gives me chills down my spine. This is a huge attraction, its amazing for this park, for us guests, and for the Carolinas!

C101: Other than Fury 325, what else are you looking forward to at Carowinds this season?

CC: The food! Taste of the Carolina’s, Harmony hall, the BBQ….they hired an executive chef for the park this year! The things I am hearing, and seeing from being around the promotions and marketing departments have my mouth salivating at the thoughts that Carowinds is really going from a run of the mill park to a “must see experience”….one of my favorite things at Disney is the Flower and Garden festival in April. This Taste of the Carolina’s has the same feel to it. Very excited about it!

C101: Have you learned anything about Carowinds that you didn’t know or surprised you in your job as Thrill Caster?

CC: I was really surprised at how busy the park is during the off-season. These guys and gals are working their tails off year ‘round to give us fans such an amazing experience, and it really makes me appreciate them a lot more to see this dead theme park as far as the “show” of the lights, the rides working, the food smells…..but it is more alive than ever with people working really hard to make Carowinds the experience it will be on March 28th.

C101: What is your favorite food at the park?

CC: Let me answer this once I try Harmony Hall this year!

C101: What is your favorite attraction at Carowinds?

CC: I love Night Hawk and Afterburn so much, and the aforementioned Carolina Cobra. But the Intimidator does it for me. It’s so high, so fast, so cool! I love it….so FOR NOW…it takes my top spot!

CC: Comment on all the videos once they’re posted on Youtube, Facebook, Instagram, Twitter. Chris who films and edits all my shows is the one seeing the comments, so it will be a really good stepping stone on what people want to see, and reactions to what we’ve already produced. Also they can email me at [email protected]

C101:Awesome. Thanks for your time, Chris!