Often after the announcement of the closure of an amusement park, it’s normal for some backlash from the community, perhaps even a grassroots effort to reopen said amusement park. However, it’s not common for a high school student to head up such a mammoth task. Meet Alex East, a Wichita-area high school student who is looking to reopen the historic Joyland Amusement Park, which last opened its doors in 2007. We recently talked to Alex about the progress his group, named the Joyland Restoration Project, is making:

C101: When did you first visit Joyland? Tell us a little bit about your first time at the park.

Alex: I first went to Joyland around one year of age, riding the rides in “Kiddieland”. At the age of two though, I did ride Roller Coaster, the famous wooden roller coaster at the park. Joyland was always such a magical place to go to because it was small, not commercialized like so many amusement parks across the country have become. Louie the clown would play the Wurlitzer Organ (which was the last one in public viewing) which would echo through the entire park. Joyland was a special place since it was so small.

C101: When did you first learn of Joyland’s closure? Can you elaborate on the reasons behind the decision to close the park?

Alex: Joyland closed its doors after the 2004 season and everyone expected it to reopen the following year. In February of 2005 an article came out in the Wichita Eagle stating that the owners were experiencing financial difficulties and Joyland Amusement Park would not be opening for the 2005 season. In October of 2005 another article was released which said the park was being leased to a Seattle based company that would put $1 million into the park for repairs. In 2006 the park reopened its gates worse off than it was before. The roller coaster was closed, Whacky Shack was closed, go-karts closed, sky-coaster closed, the Log Jam was open but did not work properly; the Slide did not have wax so you could not slide. This image of Joyland was one that people did not like to see.

I honestly believe that Joyland closed because there was no introduction of new rides. Every park has to have some form of modern rides to keep the interest of the general public. The lack attendance is why the park went under.

C101: How and when did you start the Joyland Restoration Project? What motivated you to try and reopen the park?

Alex: I started Joyland Restoration Project after I had been looking through past articles about Joyland in the news and saw hundreds of comments on each story. “I want to see the city come together to raise money in an effort to reopen Joyland.” is comment that repeated over and over again. I thought to myself “Okay, people are saying they want it back but nobody is doing anything about it.” So I began Joyland Restoration Project. I’ve always loved Joyland too, I have been on nearly 100 roller coasters across the country including Millenium Force at Cedar Point, but Joyland’s Roller Coaster is still my favorite.

C101: What has been the most difficult or frustrating aspect of trying to reopen Joyland?

Alex: One of the most difficult aspects of reopening Joyland is that everyone wants it to happen in such a short time frame. We are unable to file all of the paperwork we need to in the amount of time we have it done. Also, with the economy being where it is, it is hard to find sponsors for the project but we know we will be able to find plenty of help.

C101: What do you feel has been the Joyland Restoration Project’s greatest victory so far?

Alex: It is hard to say what our greatest victory has been so far. We have had so many things happen that we never expected such as our website, www.joylandrestorationproject.org was a domain that was donated to us by one of our supporters. Since then we have been able to spread the word to even more people. It is also nice to how people respond to the project when they hear about it.

C101: Why do you think Joyland is still standing nearly seven years after its closure?

Alex: I believe that Joyland is still standing because the owner of the park wants to see it come back to life. Joyland is not on the best side of town and that is why nobody has purchased the land and torn it down already; the only things that the land could really serve as is something unique like Joyland.

C101: What changes do you believe would need to be made in order to make Joyland a successful operation?

Alex: We have many expansion plans already in the works for the land that Joyland sits on. We plan to reopen the park with a second roller coaster and a few more rides than what were previously there. Shops, arcades, and plenty of concession stands will also line the walkways of Joyland which are crutial to the success of the park. A full sized water park has been planned for around ten years after we reopen the park. 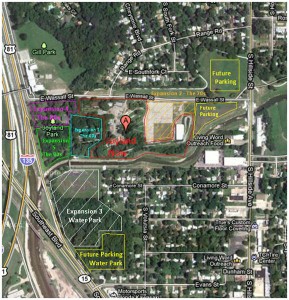 An overview of the Joyland Restoration Project master plan.

C101: What advice can you give to others who might want to reopen or revive an amusement park in their area?

Alex: No matter what anyone says, push for your dreams. Sitting in one spot wishing for something to happen will not get the job done. To bring back an amusement park is a hard task, but with the help of the community and other supporters anything is possible.

We’d like to thank Alex for taking the time to talk with us about his efforts to reopen Joyland. You can learn more about the Joyland Restoration Project at their website.