Poll: Where would you rather see SFMM’s Deja Vu?

Multiple sources are reporting that Six Flags Magic Mountain’s Deja Vu is leaving and heading across the country to Six Flags New England. At the surface, this doesn’t sound like the worst idea. However, seeing that the Giant Inverted Boomerang will be placed adjacent to the park’s aging Flashback, also a Vekoma boomerang, many are questioning the decision to place to similar rides so close together. 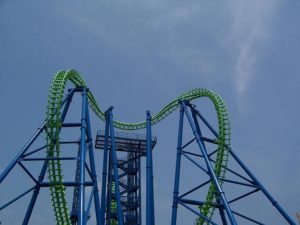 So I’m asking you: where do you think this coaster should go? I can think of several other Six Flags properties more deserving of a coaster like this. I also included the two parks that had Deja Vu models at one point (SFGAM and SFOG). Hey, in the crazy amusement park industry these days, anything is possible!