Welcome to the latest episode of Coasters-101, the series where we examine different aspects of roller coaster design in detail. In our first article, we examined all different types of lift hills. The next topic is train speed. Why is the speed of the roller coaster important? If the train is going too slow it may not make it around the track. Too fast, and the forces on the riders and structure may be too great and cause injury or damage.

Author’s Note: this article was originally published in September 2010. It received a major update in February 2022

On a coaster with a lift hill, as the train is pulled to the top, energy is being transferred into the gravitational field or stored gravitational energy. Once released, the acceleration due to gravity makes the vehicles coast back to the station. The higher the lift, the greater the amount of potential energy stored in the field. This is shown by the equation for potential energy:

PE is potential energy, m is mass (kg), g is the gravitational field intensity, equivalent to the acceleration due to gravity of 9.8 m/s/s, and h is the distance about the ground (m).

As the train accelerates down the hill, potential energy is transferred into kinetic energy, shown by this equation:

There is a difference between velocity and speed. Velocity is a vector that has a direction while speed is just a rate over distance. One thing to note is that if you double the lift hill height, you don’t automatically double the max speed at the bottom of the drop. The squared term means that if you double your starting height, the velocity is increased by the square root of 2, which is a factor of only 1.414.

Aerodynamic drag is a force that opposes the coaster car’s motion through the air and is generated by the difference in velocity between the moving car and the air it’s passing through. Drag force depends on velocity, as drag acts perpendicular to a surface therefore the surface area has a large impact. The direction and speed of the wind affects the speed of the train. If the wind is blowing strongly directly into a car right as it’s cresting a hill, it could result in the coaster stalling and rolling backwards and getting stuck in the low point between hills (called valleying). This is why high winds will sometimes force amusement parks to close the ride until conditions are safe to operate.

The two most common factors that have a direct effect upon the amount of air resistance are the speed of the object and the cross-sectional area of the object. Increased speed or increased cross-sectional area result in increased resistance. Wind resistance goes up with velocity squared. Wind loading is more noticeable on taller roller coasters. A single car coaster will be more susceptible to wind drag than a train of cars because of the much less weight relative to the frontal surface area. The losses due to aerodynamic drag could be lessened with an aerodynamically ­shaped car. 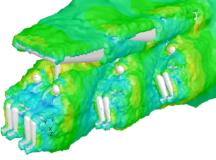 FlowMotion has an interesting article on drag minimization: “in high speed twisting parts of the track, the drag is increased considerably when the individual two-seat carriages fan out and more frontal area of the train is exposed to the wind.”

How Does Friction Affect Roller Coasters?

Friction is the resistance that one surface or object encounters when moving over another. Unlike drag, dry friction is nearly independent of velocity and acts tangent to the surfaces. Friction in the wheel bearings and between the car wheels and the track results in heat and transfers kinetic energy away from the car. Other sources of friction:

Wheel Bearing Clearance – Correct assembly of the wheels reduces internal friction and heat. The wheels need to be perfectly aligned. If you’ve ever made a pinewood derby car, one of the first things you should do to make your car faster is by reducing the amount of energy lost due to friction: make sure the wheels are straight and that the car rolls in a straight line.

Wheel Bearing Lubrication – The amount and type of grease affects the speed of the train.

Track Lubrication – If the tack is lubricated the train will travel faster due to less frictional head losses. Track lubrication also prevents excessive wear to the rails and the wheels, especially those of wooden roller coasters. Maintenance workers at Merlin’s Mayhem, a family suspended coaster by S&S at Dutch Wonderland, informed me they apply grease to the first third of the lift hill every morning. As the train passes, the wheels pick some up and distribute it around the track. 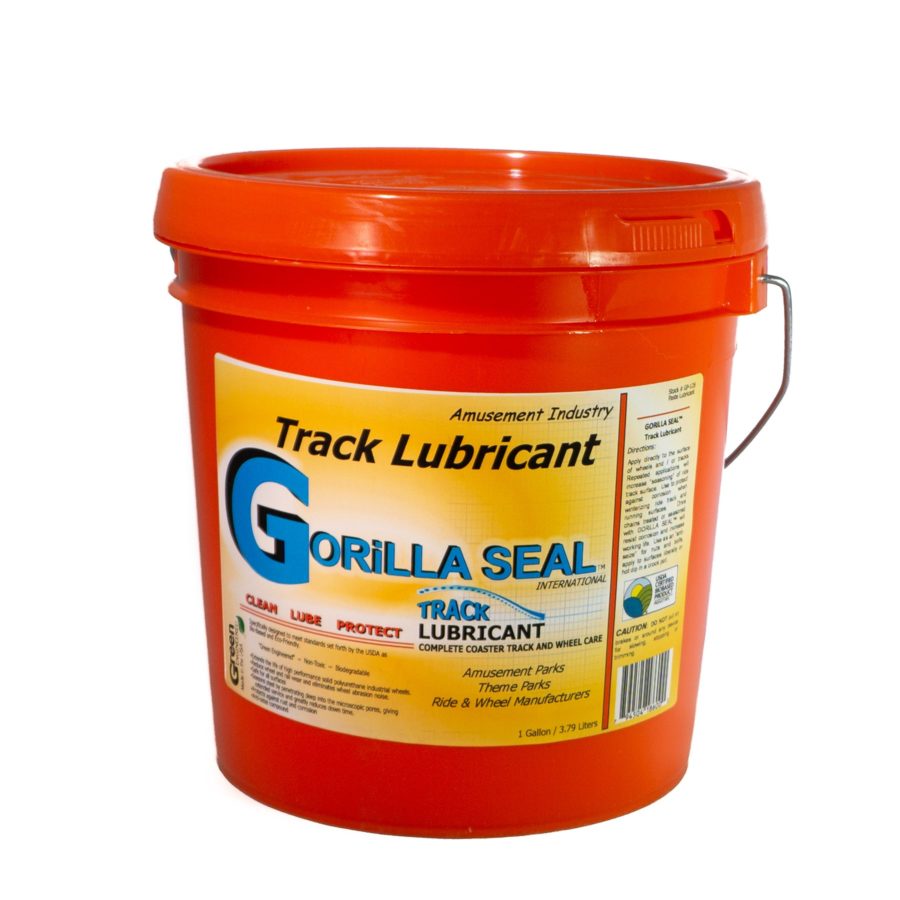 The application of lubricating grease is a balancing act that plays a vital role in controlling the speed of the roller coaster: too little grease speeds up the train, while too much slows it down, even causing it to grind to a halt mid-ride. Coaster operators may use a lithium-based grease which has the consistency of peanut butter at room temperature but changes to a liquid state as the wheels heat up. Adding grease means there is more grease to absorb the generated heat from the bearings, so the grease stays thicker in consistency. Thicker grease makes for a slower ride. But, by contrast, if there is less grease to absorb the heat, the grease itself heats up and thins out.

How does temperature affect roller coasters?

The lower the temperature, the slower the train goes. Why? The answer is in viscosity, the opposition to flow, which strongly depends on temperature. When you squeeze a bottle of syrup out onto your morning pancakes at room temperature, the syrup slowly drips out of the bottle. What happens if you heat up the syrup in the microwave first? It pours out much more quickly. That’s viscosity. So all the lubrication in the wheel bearings, grease on the track, and so on, the resistance to flow decreases with increased temperature. Conversely, when the temperature drops, the lubricants are less effective at doing their jobs, thus affecting the speed of the train. Lower temperatures affect the friction coefficient both between the wheels and rails as well as the greases’ viscosity in all bearings and so on. Cold operating temperatures present challenges especially due to increased friction from grease viscosity. This can be countered by having heaters under the maintenance bay or station area to warm up wheels and grease on trains.

However, in the real world we do have to deal with resistance forces like air drag. The portion of kinetic energy lost to drag is less with a larger mass object. The larger the mass, the larger the momentum, and the more force you need to change it. Mass does not make a roller coaster go faster but it does make it harder to slow down.

This is why amusement parks test roller coasters with dummies filled with water. The water dummies increase the mass of the train making it harder for the resistance forces to slow it down so it’s less likely to get stuck. This is especially useful when breaking in a new ride where the conditions may lend towards greater resistance forces: cold weather, more friction between brand new components, wind, etc. 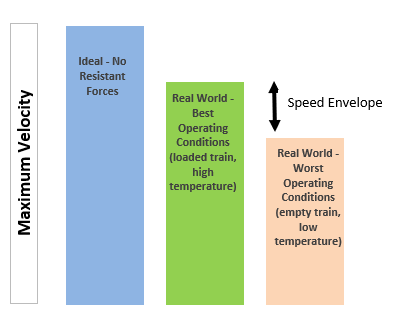 Roller coasters operate within a speed envelop, or window. The low end of the window is the slowest speed the coaster can go yet still make it through the course. This is seen during unfavorable conditions such as an empty train running in low temperature. The high end of the window is the fastest speed the train operating in optimal conditions: fully loaded train, high temperature. Because the speed of the train varies but the curvature of the track remains the same, the gs experienced by riders will also vary. Trim brakes are added if the calculated gs exceed acceptable safety standards. Trim brakes can reduce the speed variance; making the speed envelop smaller (bringing the green column down closer to the orange column in the diagram above) so that every ride feels relatively the same regardless of the operating conditions (and has the added benefit of reducing wear and tear).

The maximum speed of a roller coaster is determined by the height at which the train is released or the energy input into the system via a launch, but there are additional factors that determine how far it will roll before stopping. These factors play larger or smaller roles depending on what type of coaster you are looking at, wood or steel. For example, track lubrication is primarily a concern of wooden coasters whereas wheel material is a bigger factor for steel rides. Some of these factors can be controlled by the park, such as when and what kind of lubrication to use. Other factors usually cannot be controlled, such as temperature, wind (unless built entirely indoors), and the natural lubrication effect of rain. A roller coaster designer’s goal should be to minimize the kinetic energy transferred to thermal energy as much as possible. Stayed tuned for the next edition of Coasters-101!

Special thanks to Nathan Unterman for assisting with this article. Check out his book on Amusement Park Physics here.