While this is not an unusual sight to see – it is still very shocking to see some of the park’s coasters underwater. From ajc.com: 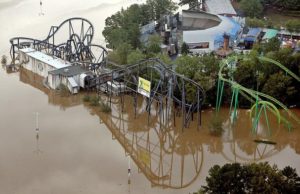 Pay no attention to the photos of the Scream Machine almost completely submerged in water — Six Flags over Georgia plans to open this weekend, a park spokeswoman said Tuesday.

Park employees have been checking the water levels constantly, communications director Kendell Kelton said. While officials still need to wait for any flooding to recede, workers are gearing up to open Saturday, one weekend before the annual Fright Fest Halloween festivities

“We’ve handled floods in the past, and we know how to handle this,” Kelton said.

The area around the Scream Machine has been underwater since Monday, she said. If the water doesn’t recede, that area will remain blocked off this weekend, Kelton said.

Heavy rains and flooding have caused portions of I-285 and I-20 in Cobb County to close. Schools are also closed Tuesday.

Six Flags over Georgia is the largest regional theme park in the Southeast. Its two parks — the Six Flags in Austell and the White Water property in Marietta — are the region’s largest employer of seasonal workers.

Yet the park’s New York-based parent company filed for bankruptcy in June as a way of dealing with $1.8 billion worth of debt. While the company said the move would not impact individual parks, the ability to open this weekend and prepare for Fright Fest remains important for Six Flags over Georgia.