A ride on Gravity Max at Taiwan’s Lihpao Land theme park begins innocently enough with a typical chain lift hill. But upon cresting the apex, you’ll notice the track suddenly ends – the rails stop and you see nothing but blue sky. The train keeps creeping forward until it reaches the end of the track, thankfully coming to a stop.

What happens next will blow your mind—the entire section of track the vehicle is now sitting rotates ninety degrees. You’re on the world’s first tilt coaster and in a terrifying heartbeat you’re staring straight down at the ground. The movable track segment is locked into the next section of track and, without warning, the train is released causing you to free fall over one hundred feet at fifty-six miles per hour.

See for yourself by watching the video below why Gravity Max is in the running for most terrifying roller coaster on the planet.

But that doesn’t mean it isn’t safe.

What Happened on Gravity Max?

On January 31st, 2019, several articles like this one popped up around the web and at first glance made it sound like something terrible had occurred on the Gravity Max tilt coaster in Taiwan. 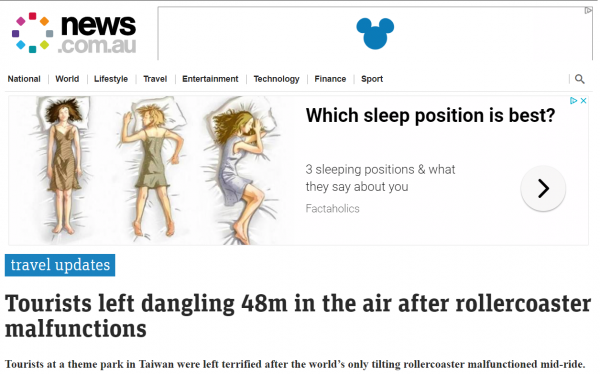 But what really happened on Gravity Max?

Gravity Max did NOT malfunction. In fact, it was just the opposite: the safety system did exactly what is was designed to do. That is, prevent a catastrophic accident from happening. Everything worked as designed.

Tilt coasters have redundant safety features to prevent the train from leaving the tilt track prematurely. A hook at the end of the track latches onto the back of the train.

There’s also a block at the front of the track that would also prevent the train from smashing into the ground if the hook were ever to fail.

When the coaster tilts to ninety degrees, there are several sensors to check the position of the track to ensure the rails are aligned before the computer gives the OK to release the train. Occasionally, the rails will fail to align, usually due to a weather related event like rain or fog. Which is exactly what happened here. The rails weren’t able to fully align due to high winds so the computer didn’t released the train. Instead, it lowered the tilt track back to the horizontal position and all twenty riders were safely released from the train and onto the horizontal platform designed for exactly this purpose.

From the article: Theme park director Wang Yung-hao said they were satisfied the fail-safe would prevent riders from coming to any harm…He reassured visitors that they were “100 percent safe” on Gravity Max.” I completely agree. The articles even go on to say “Engineers inspected the ride and reopened it just 20 minutes later.” If the ride had broke or malfunctioned why were they able to reopen so quickly? Because nothing happened.

Unfortunately, this is the relationship between mainstream media and amusement parks today; sensationalizing non-events because it will get them a lot of likes/comments/shares on Facebook.

On top of that, the articles don’t even have their facts straight. Gravity Max is no longer the only tilt coaster in the world. Golden Horse has two “broken rail” coasters open in China including the dueling tilt coaster The Battle of Jungle King and another on the way in 2019. Heck, you could even make the argument that Escape from Gringotts at Universal Studios Florida is also a tilt coaster with it’s see-saw track element, it just doesn’t go all the way to ninety-degrees.

Scream your head off on Gravity Max but rest assured there’s no reason to be scared for your safety on one of the world’s scariest roller coasters.