Coaster101 Roundtable: Our Most Underrated Coasters

Recently, About.com Theme Park Expert Arthur Levine published a list of his “Top 10 Most Underrated Roller Coasters in North America.” Levine lists such coasters as “The Swamp Fox Coaster” at Family Kingdom in Myrtle Beach, SC and Cedar Point’s Gemini. Arthur’s list got us thinking about our own personal underrated roller coasters as well.

ANDREW: I love Arthur’s pick of The Swamp Fox at No. 10 on his list. I rode it for the first time this summer, and for being a roller coaster at a smaller beach-side park like Family Kingdom, it packs a good punch and provides some great airtime, in addition to its panoramic views of the Atlantic Ocean.

As far as my own personal picks for roller coasters that I feel are vastly underrated, I’m going to go with the now-defunct Led Zeppelin: The Ride/The Time Machine at Hard Rock Park/Freestyle Music Park. I think that due to the park’s location and attendance woes, not many people got to experience this B&M Coaster. Everything was there for a great B&M coaster–A 150′ foot drop, 120′ Vertical Loop, 95′ Cobra Roll and a 75′ Zero-G roll over water. I just think that it wasn’t ridden by enough people. 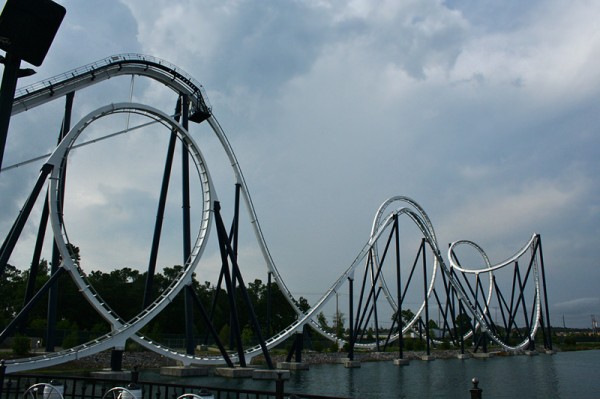 As Led Zeppelin, the coaster’s speakers pulsated with the wailing voice of Robert Plant and guitar riffs of Jimmy Page as Led Zeppelin’s hit single “Whole Lotta Love” was played in full, between the ride’s preshow and actual duration of the ride. Even as The Time Machine, a rotating mashup of tracks from the 1960’s, 70’s, 80’s, 90’s and 2000’s was a great addition. I remember one summer where my brother and I kept getting back in line, trying to catch all five audio tracks. (I think we ended up missing the 1970’s.)

After five years of sitting dormant, they’re finally removing Led Zeppelin/The Time Machine, according to these tweets from @CoasterFusion.

If I have to choose a ride that’s still operating today, I’ll go with Dominator at Kings Dominion, in Doswell, VA. 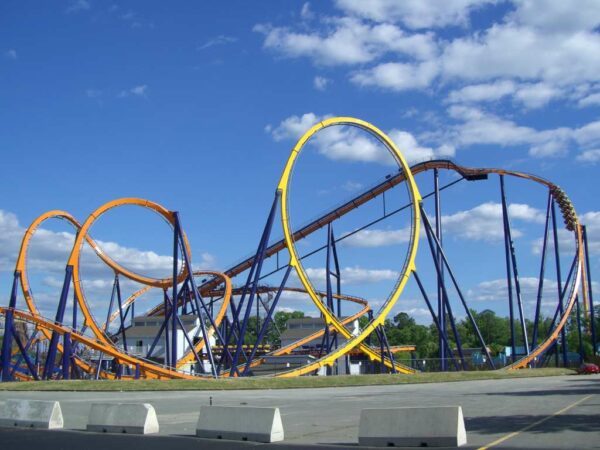 When many people go to Kings Dominion, they beeline for Intimidator 305 or Volcano: The Blast Coaster. I think that the Geauga Lake B&M transplant is a great coaster in its own right, and is still an incredibly smooth ride. It’s still the record holder for longest floorless coaster (4,210 feet), and has the fourth highest vertical loop (135 feet) of any roller coaster today. 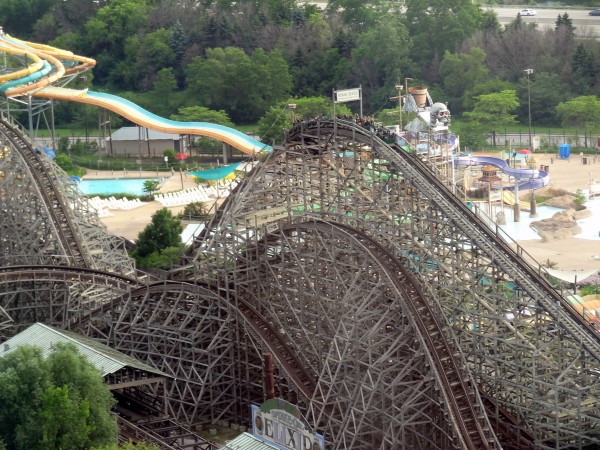 You probably won’t find Viper at Six Flags Great America on any “top-10” coaster lists, but it’s certainly one of my favorite wooden coasters.

Why is Viper underrated? Its pacing is incredible. It’s rough, but no so rough that your left with bruises after riding (I’m looking at you, American Eagle). The double-down drop will leave your stomach in the sky.

After riding, you’ll know why this coaster layout was good enough to be replicated. And unfortunately, not all Cyclone replicas are equally as enjoyable. Viper is truly a gem.

Tip: sit in the second row of the last car for maximum airtime and a smoother ride.

Sort of a bit biased with this one since it does come out of my home park, but Wolverine Wildcat at Michigan’s Adventure is my choice for underrated coaster. 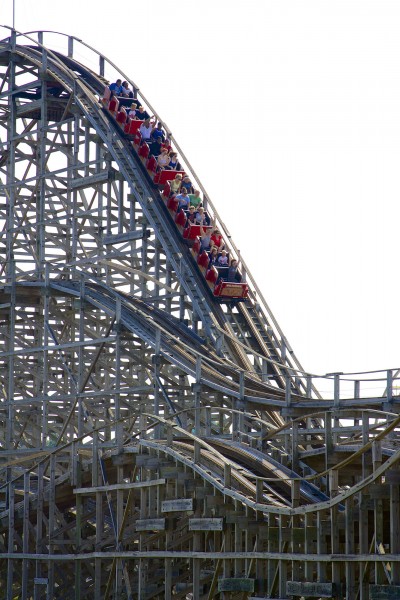 Built in 1988, Wolverine Wildcat was the first roller coaster to be built from scratch by the Dinn Corporation and started the partnership between them and infamous roller coaster designer Curtis D. Summers. Summers based the design on the Phoenix at Knoebels Amusement park, which the Dinn Corporation had relocated previously in 1985. The layout is slightly altered, but several of the elements are the same, including the tunnel coming out of the station and the double-up double-down hill built next to the lift hill.

It might not pack the same airtime as Phoenix but the coaster still moves pretty well, especially for being the oldest Dinn-Summers creation. Michigan’s Adventure has taken very good care of this coaster, and with having the train refurbished by PTCI for the 2014 season, this year had some of the best rides I’ve ever had on this. From many of the park trip reports from Michigan’s Adventure this year, it sounds like I’m not the only one that’s been impressed with this coaster.

Since the park is now closed for the season, you’ll  have to wait until 2015 to get your ride on this coaster, or you can take a virtual ride on it right below.

A little trivia: The train on Wolverine Wildcat is manually stopped by the control operator. It is one of the few roller coasters left in the Cedar Fair chain that does not have a computer system to stop the train. 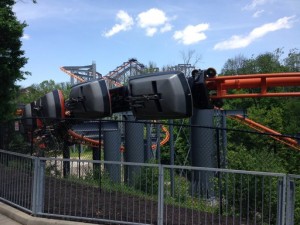 Overshadowed by the opening of Banshee, the newly renovated Arrow suspended coaster, The Bat, is also one of America’s most underrated coasters. Many pass by The Bat because it hides back in a corner of Kings Island and doesn’t have the “hype” that Banshee, Diamondback and The Beast possess.

This coaster, while it may be short, packs a punch. From the first drop until it whips you into the brake run, The Bat never lets up. As you fly through the woods, you hit a max speed of 51 mph, but it feels like you are going much, much faster. I always make sure to ride it when I am at Kings Island (it is usually a walk-on too). Try it for yourself, you won’t be disappointed!

NICK: Coaster enthusiasts rave about Phantom’s Revenge (rightly so), Racer, and Thunderbolt but my favorite roller coaster at Kennywood, and one of the most underrated in America, is SkyRocket. As I said in my initial Sky Rocket review, it’s a smooth and quiet ride full of airtime in unexpected places.I even included SkyRocket in my Top Ten roller coaster list. 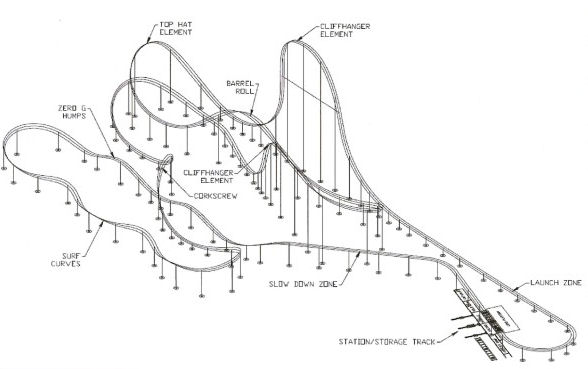 Maybe it’s too new to be considered underrated but I think FireChaser Express at Dollywood might end up on this list in the future. It’s one of the best family roller coasters around and is pure fun. Read my FireChaser Express review from earlier this year.

ERIC:  OK, so it’s probably not accurate to say a world famous coaster that is a national historic landmark and has been ridden by more than 60 million people is underrated, but I’m going to do it anyway.  I think Santa Cruz Beach Boardwalks Giant Dipper is one of the more underrated coasters in the country.  My reasoning is at least partly personal, because I forget pretty much every year how good it is until I find myself down at the beach being reminded how good it is, and how well it compares to new wooden coasters.

The opening of the ride is one of my favorites on any coaster, as the train dips into a black tunnel, twisting back and forth before hitting the lift hill.  After that, it’s just a beautifully paced ride in a beautiful setting.  Looking over the beach cresting the hill, going out and back and out again, and with the back half of the ride being mostly hidden underneath the wooden structure and bouncing beneath the rest of the track.  Plus, ninety year old roller coasters aren’t supposed to go 55 mph, are they?  I think my feeling about the underrated-ness of the Giant Dipper is best captured by the fact that even after riding Gold Striker at California’s Great America, #7 on the Golden Ticket list of top wooden coasters this year, countless times (and loving it), I’m not convinced the Giant Dipper isn’t still the best wooden coaster in Northern California.