Welcome to another session of Coasters101! Today, we’re going to continue looking at some of the math and engineering that goes into designing a roller coaster. Earlier, we looked at some physics calculations in regard to the lift hill and first drop. Now, I’d like to take a look at banked curves.

Please keep in mind that everything is generally simplified. Friction and other head losses have not been taken into account. I also assume a basic understanding of physics terms  such as velocity, acceleration, g forces, etc. Don’t worry, you don’t need an advanced physics degree to understand this article. Please comment if you have any questions! 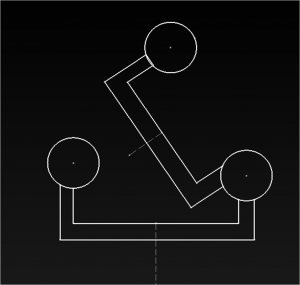 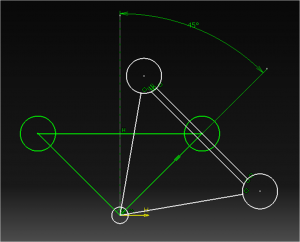 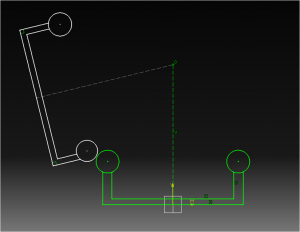 There are generally two scenarios a designer will want to avoid when designing a banked curve: overbanking and underbanking. At just the right bank for a coaster car’s velocity, the car will not need any type of undercarriage or guide wheels to stay on the track. The rider will feel a normal force pushing him into the seat of the car. This is the optimum scenario to keep the car on the track, where no friction is needed.

Underbanking is just the opposite where there is not enough bank for the car’s velocity. The car could tip to the outside of the curve. The guide and uptop wheels are holding the car onto the track. The rider feels a force pushing him away from the center of the curve. Friction is also needed to keep the car on the track.

Some curves on roller coasters are intentionally underbanked by a small amount. The passengers feel a slightly outward force around the curves which they expect and will naturally adjust too. This is done because an attempt to produce a perfect bank could accidentally result in an overbank due to a slower than expected train (possibly slower from high winds, half-empty train, etc.) Now, there are a few coasters which bank their track to the outside of the curve on purpose to create a thrilling effect and unique feeling (see Steel Hawg).

How do you produce a perfectly banked curve? The following equation is used: Tan(theta)=v^2/rg where theta is the angle where no outside forces other than gravity are required to keep the car from sliding to the inside or outside of the curve. If the velocity of the car is changing through the curve then the banking angle of the track must also change to compensate. To calculate the G’s felt for the ideal banked curve with no friction: G’s felt = 1/sin(theta)

I’d also like to take this time to talk about the modifications being made to Intimidator 305 at Kings Dominion. As you may know, the ride initially opened with a top speed of 90 mph. Many guests complained about the high g-forces experienced in the first turn and there were rumors that the wheels on the trains had to be replaced at a very high rate due to the high stresses. Shortly after opening, a series of trim brakes were added to the first drop significantly reducing the top speed of the ride. This offseason, the park has announced they are re-profiling the first turn. What is the reasoning behind all of this? 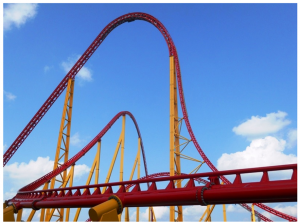 Well, the main issue isn’t the high speeds in the first turn; the issue here is angular acceleration- the vertical force that the train, the wheels, and the riders experience going around the curve. The equation in question is F = V^2/R. The main objective is to reduce the force (F) on the wheels and riders. There are two ways to reduce that force: either reduce the velocity (V) of the train or increase the radius R of the curve.

As a temporary fix this past season, the park reduced the speed of the trains by adding the trim brakes to the first drop. Now, this off-season the park is looking for a permanent fix to this problem by increasing the curve radius which will allow the train to run faster through the curve (but at reduced force). The result also means the coaster will be able to take the rest of the course faster because the train will come out of the curve at a higher speed, thus returning the ride to its original and intended glory!

Check out more of our technical articles here!

To read more about coaster design check out Coasters 101: An Engineer’s Guide to Roller Coaster Design.