Earlier this year, four members of the Coaster101 team visited Six Flags Darien Lake for the first time to check out the park’s collection of eight coasters and other attractions. 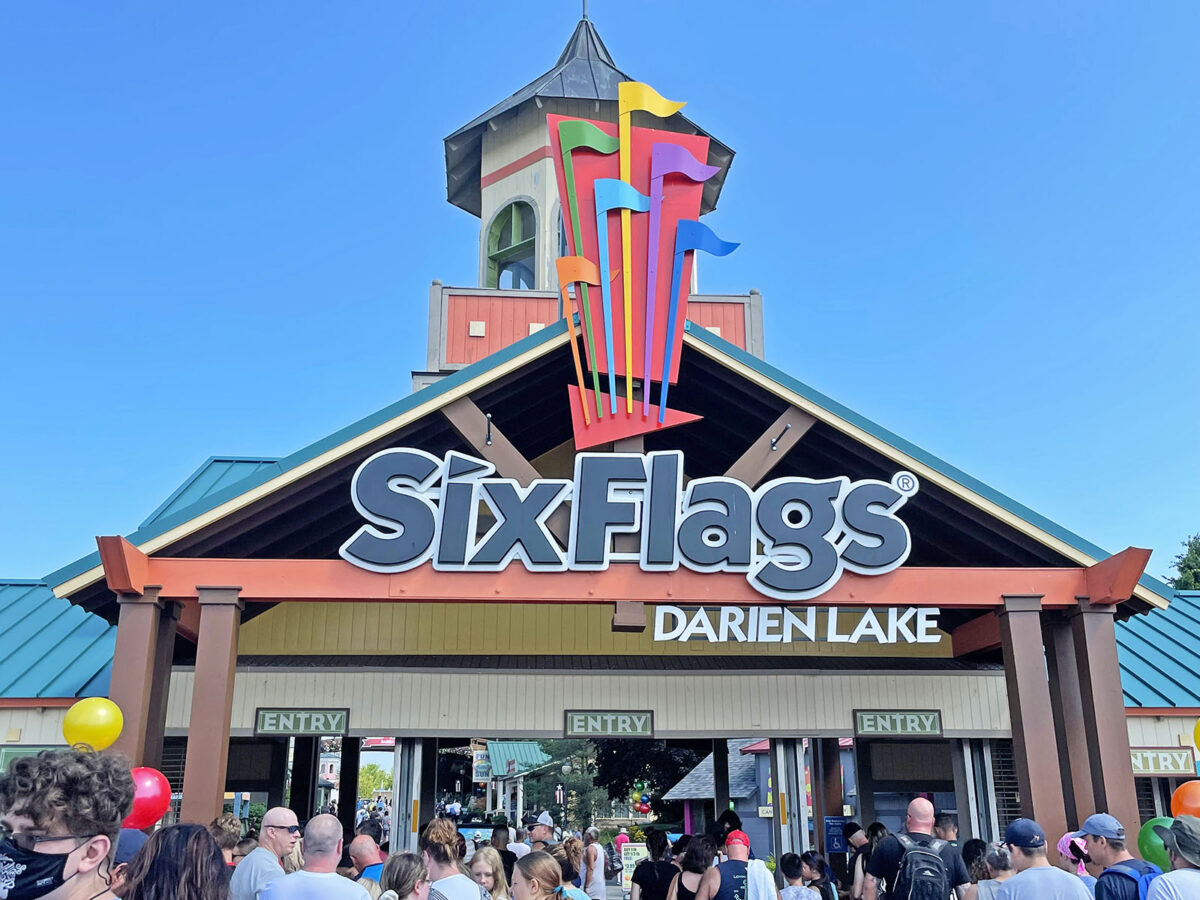 While Darien Lake has a respectable lineup of coasters, all but two are clones — meaning there are duplicates operating in other parts of the country or world. So for some of us, these ride experiences were not necessarily new to us. But that doesn’t diminish the fact that we had a great time at the park.

On a scale of 1 (not-so-great) to 5 (great), below are our ratings of the roller coasters at Six Flags Darien Lake followed by our ranking of our five favorites.

As demonstrated by the score below, only one of us rode Boomerang at Six Flags Darien Lake. The lakeside setting and (relatively) fresh coat of paint are refreshing but do little to distinguish this Vekoma boomerang model from the 50+ others operating around the world. However, John claimed that this was one of the smoothest he had ridden, even though it has the original trains rather than the newer trains with vest-style restraints. 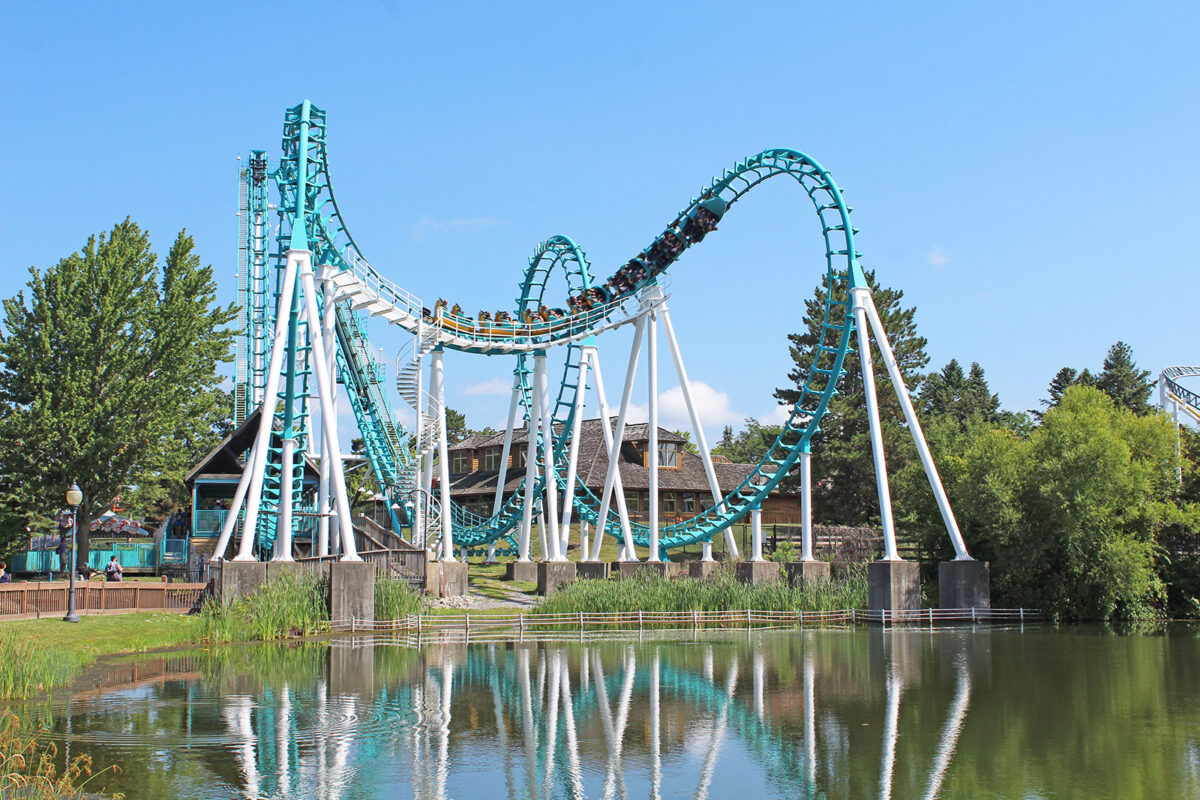 Though it’s not buttery-smooth by any means, Six Flags Darien Lake’s Boomerang might be a good one to try out if you’re new to the Vekoma Boomerang. 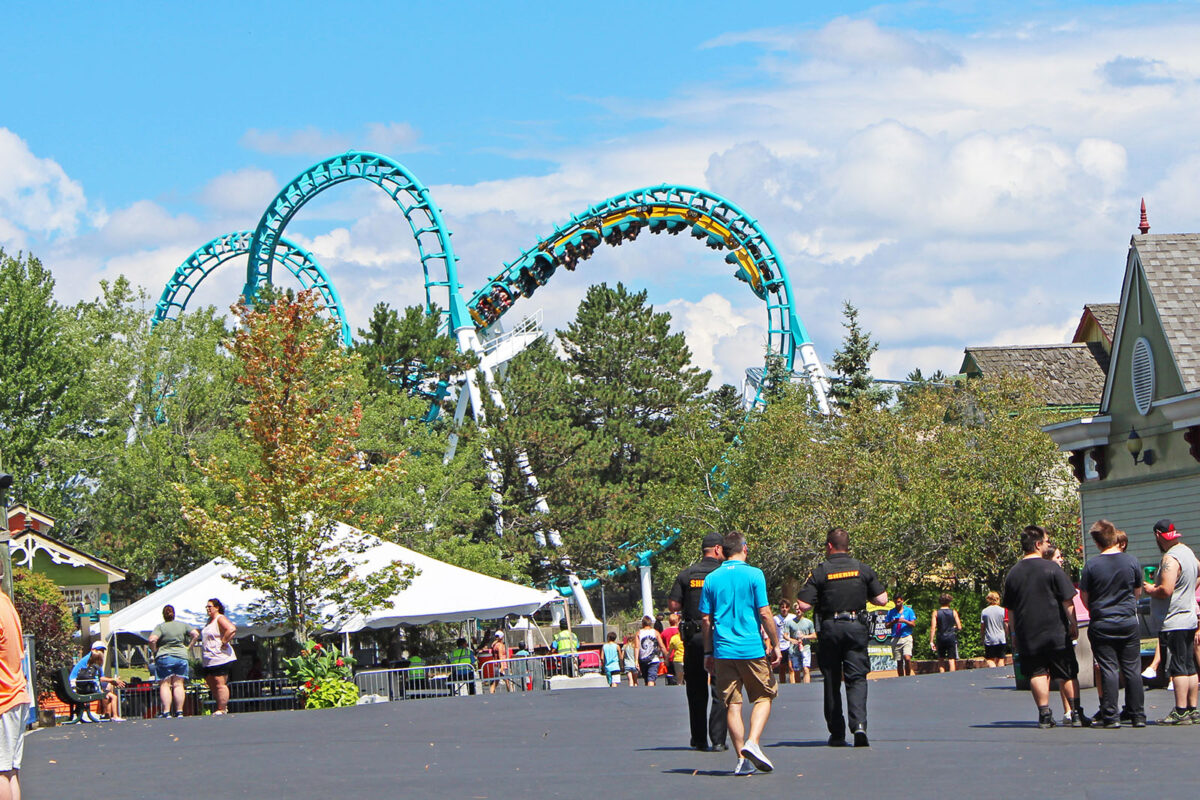 Another common Vekoma model, this “Suspended Looping Coaster” (SLC) is more or less forgettable aside from its rough, head-banging ride – possibly the inspiration behind the name “Mind Eraser.” 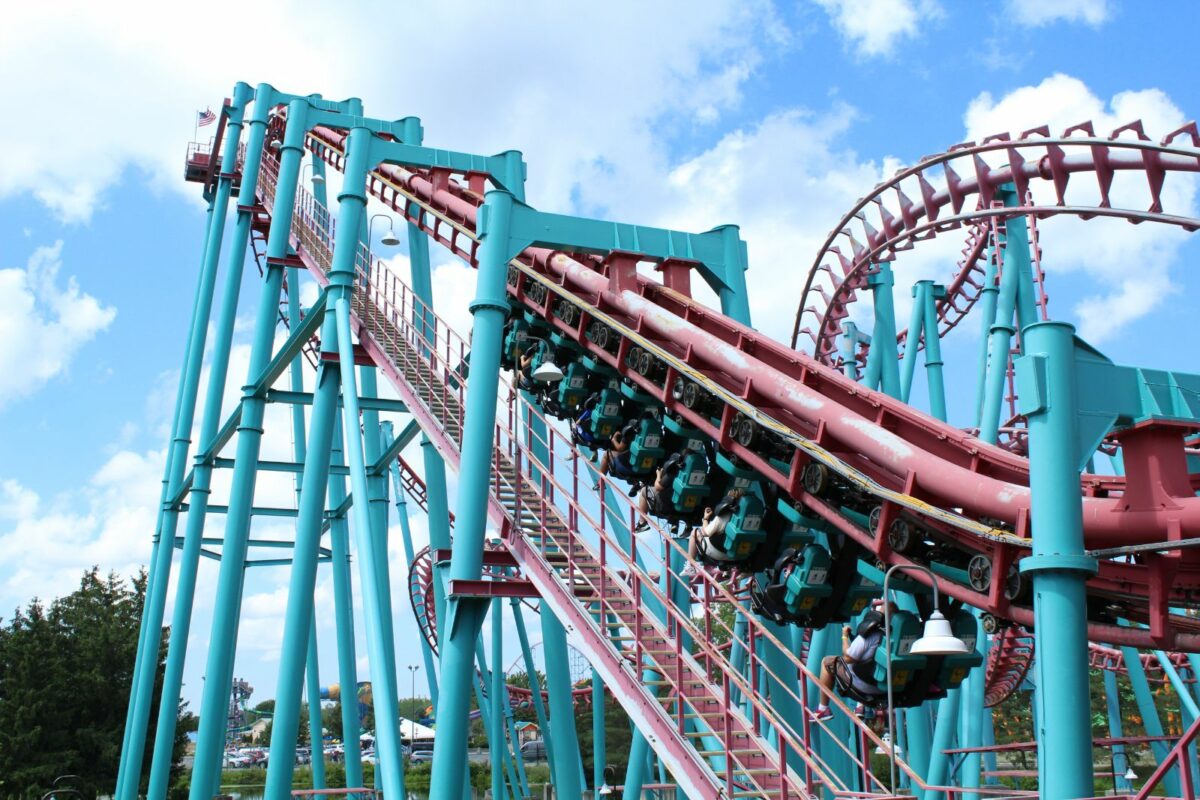 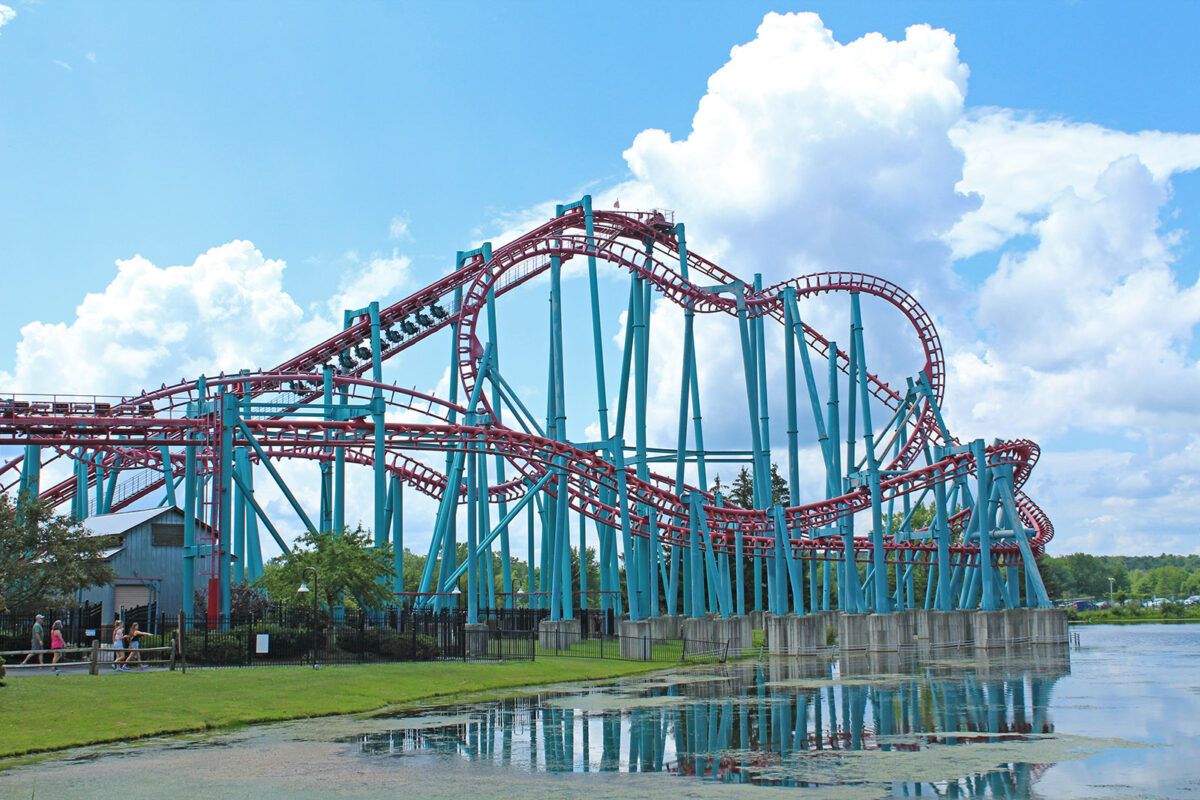 Unless you’re a coaster credit-chaser, Mind Eraser is a skippable entry in Darien Lake’s coaster roster.

Moto Coaster was the first motorbike-style coaster from Zamperla, opening in May 2008 just weeks before Zamperla’s Pony Express at Knott’s Berry Farm. Despite the two coasters opening in the same year, they share little in common aside from the saddle-style seating position. Unlike Pony Express’s sprawling layout, Moto Coaster is compact — its nearly 1,200 feet of track crosses over and under itself numerous times. The 0-37 mph, 2-second launch is thrilling yet tame enough for more timid thrill seekers. 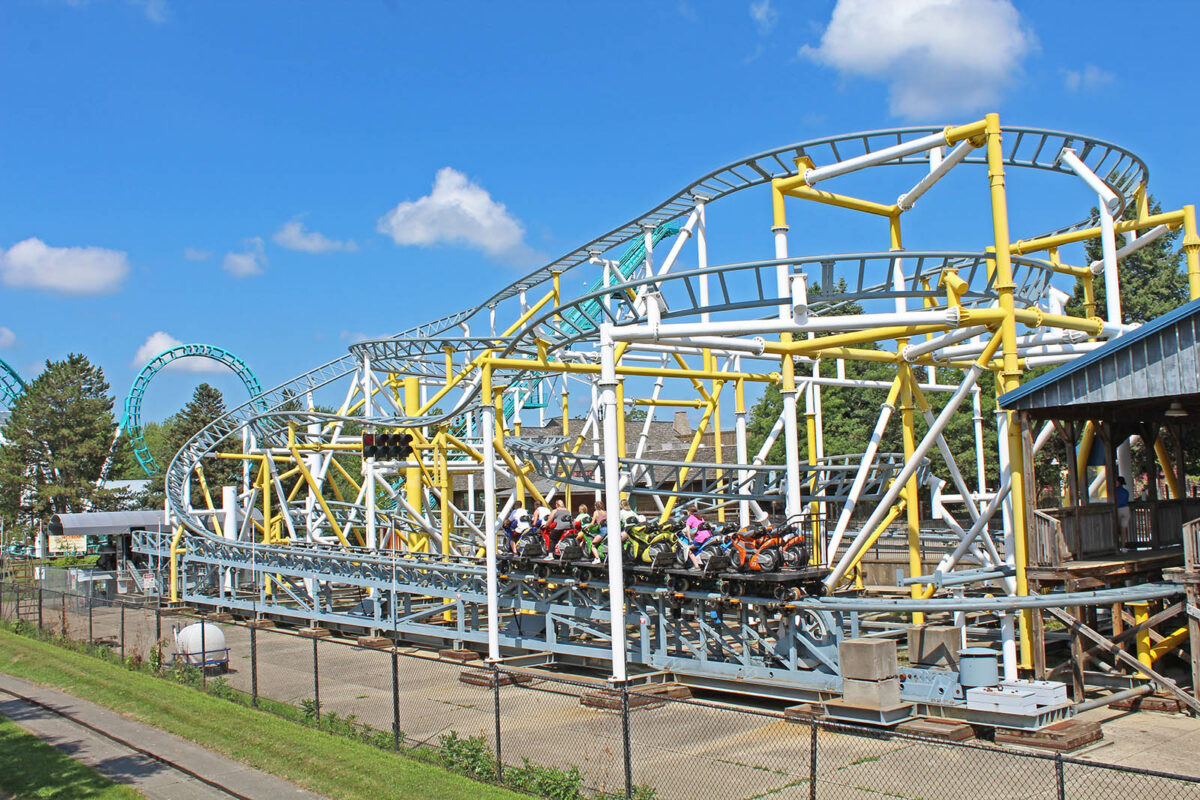 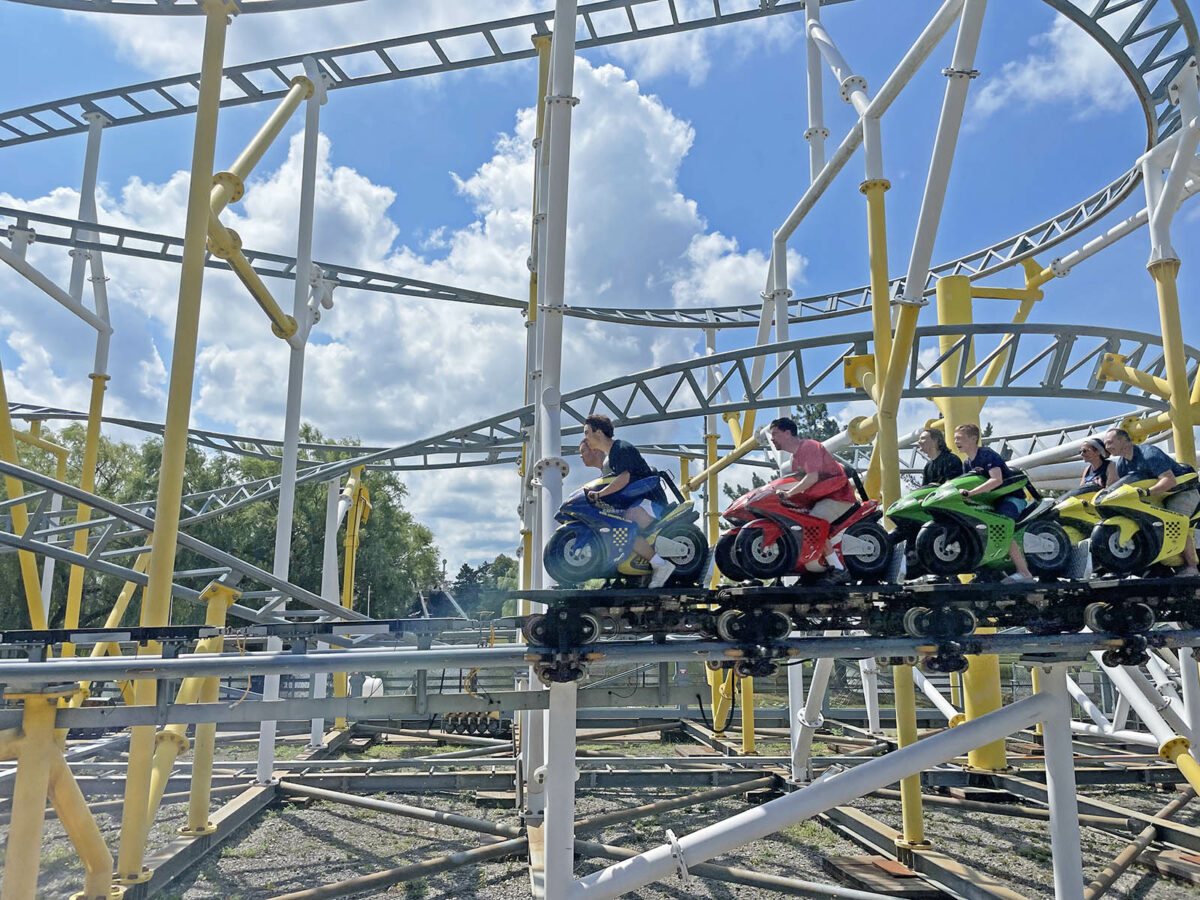 Moto Coaster is yet another unique entry in the coaster lineup at Six Flags Darien Lake. It‘s not a heavy hitter, but it is a solid mid-tier, family-friendly coaster that the park desperately needs.

The only wooden coaster at Six Flags Darien Lake, Predator is a product of the Dinn Corporation and coaster designer Curtis D. Summers. Featuring a double out-and-back layout adjacent to the lake after which the park is named, the coaster’s 3,400-foot-long layout is rough at times but well-paced. 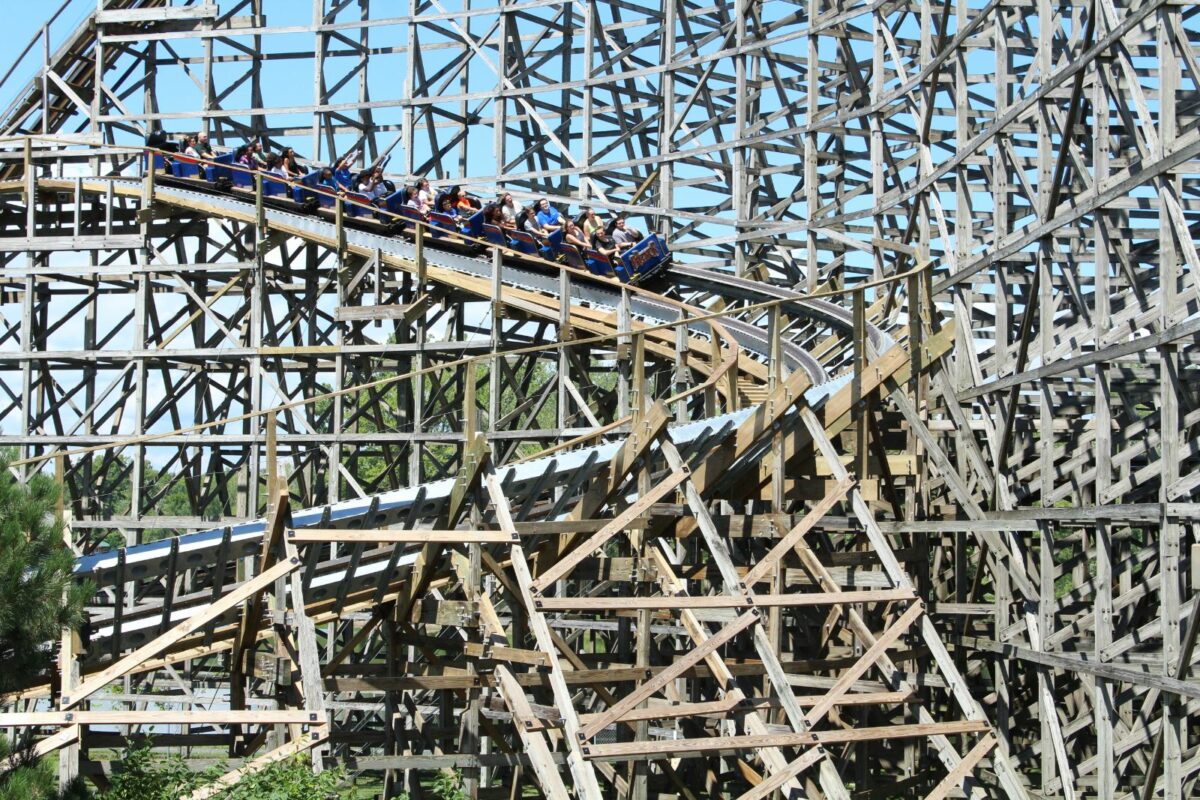 In 2022, roughly 500 feet of Predator’s wooden track was replaced by Great Coaster International’s (GCI) new steel track (often referred to as “Titan Track” — seen in the photo above). The section of new track was louder but, most importantly, noticeably smoother. 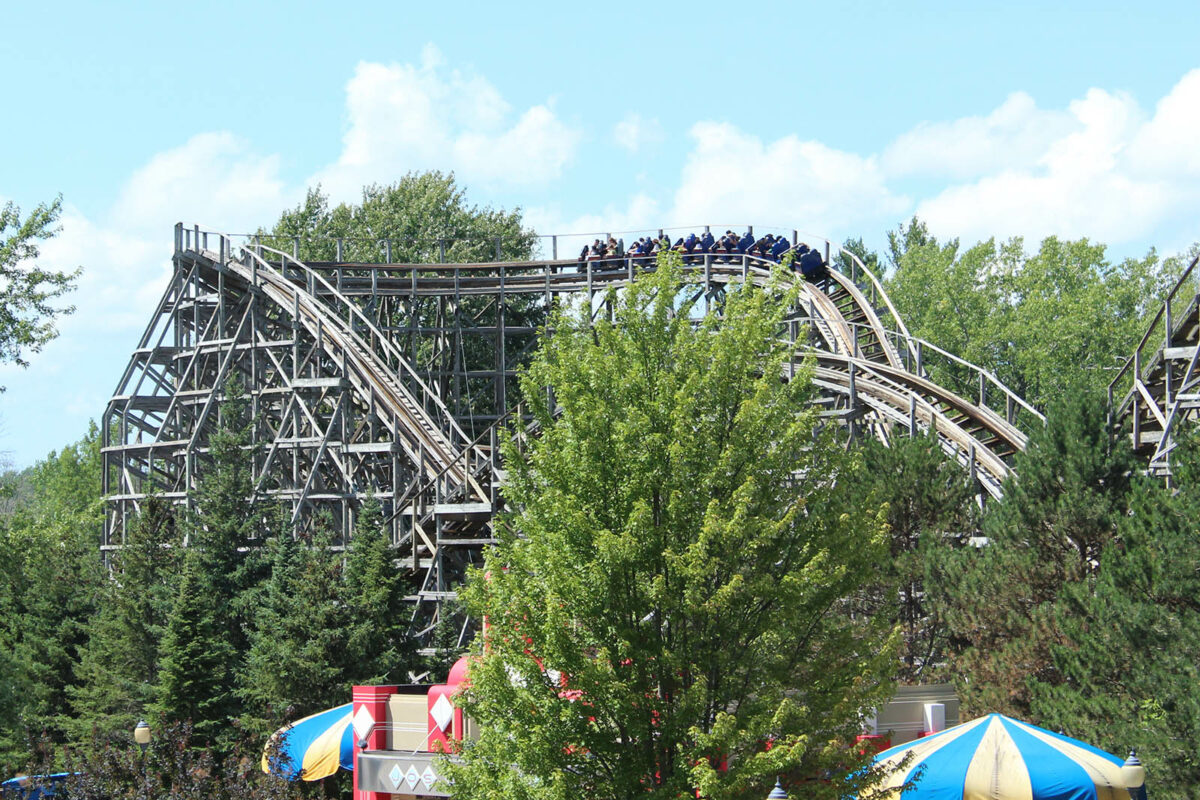 Predator had some surprising pops of air-time that made it really fun. It’s a little rough, but not unbearable, and the one short section of Titan track is really smooth, which serves as a welcome reprieve. However, it’s a little bit of a jarring transition to go from a bumpy wooden track to a super smooth steel track and then back to wood. Hopefully the park and GCI will continue to add more steel track in the coming years.

A mirror image of Superman – Ride of Steel at Six Flags America, Six Flags New England’s Ride of Steel is a traditional Intamin hyper coaster with a sprawling, 5,400-foot-long out-and-back layout that travels outside of the park and parallels two small lakes. The ride features a 205-foot drop and a top speed of 73 mph. 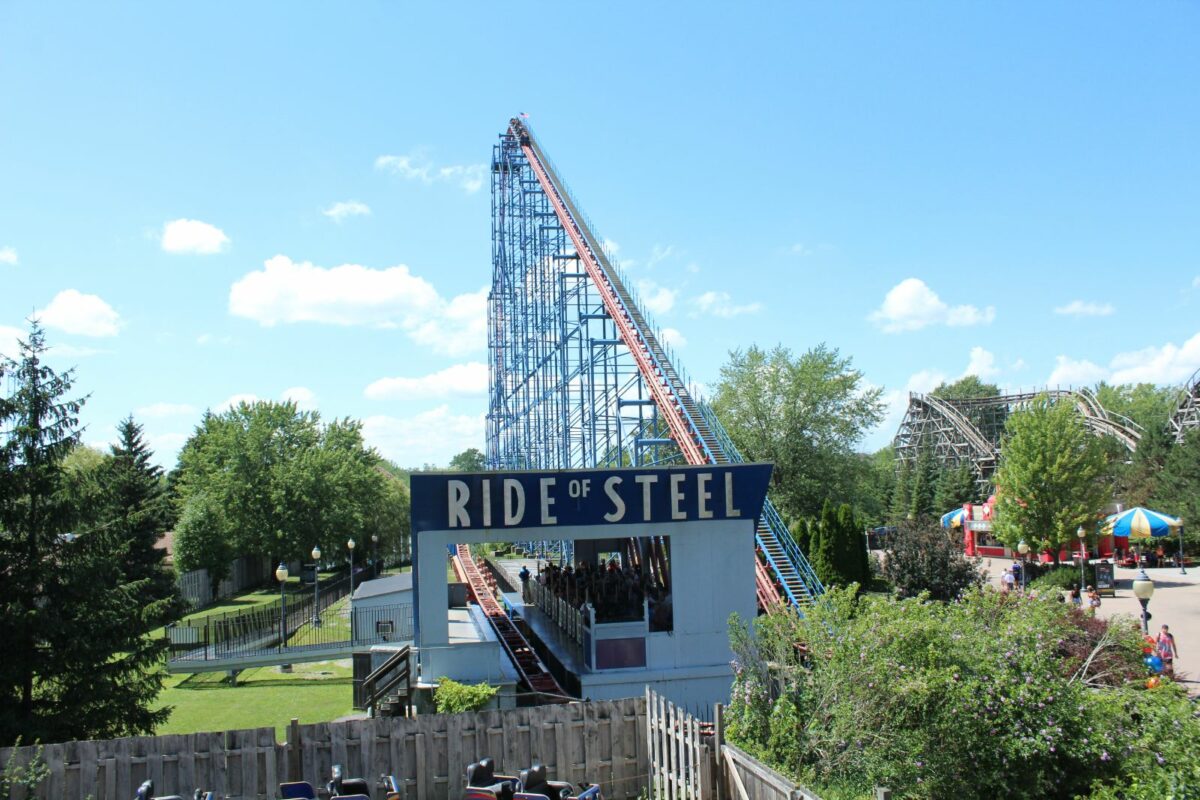 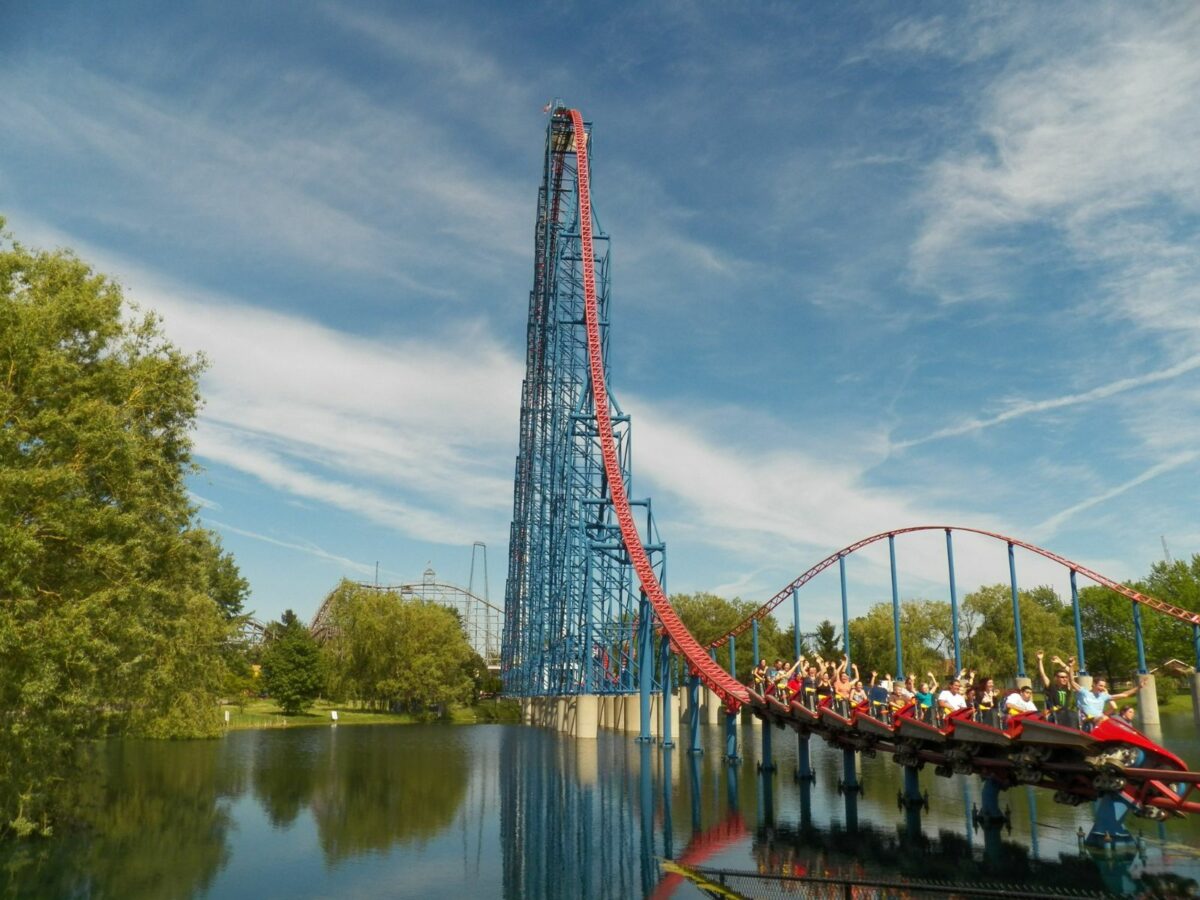 Fun fact: Ride of Steel was the first roller coaster to use magnetic braking (a year before Millennium Force did).

Standing just under 100 feet tall, Tantrum demands attention with its bright orange and green color scheme and beyond-vertical, 97-degree drop. No inch of track is wasted — Tantrum’s 1,246-foot-long layout is packed with back-to-back elements, including an Immelmann, cutback and inclined loop. 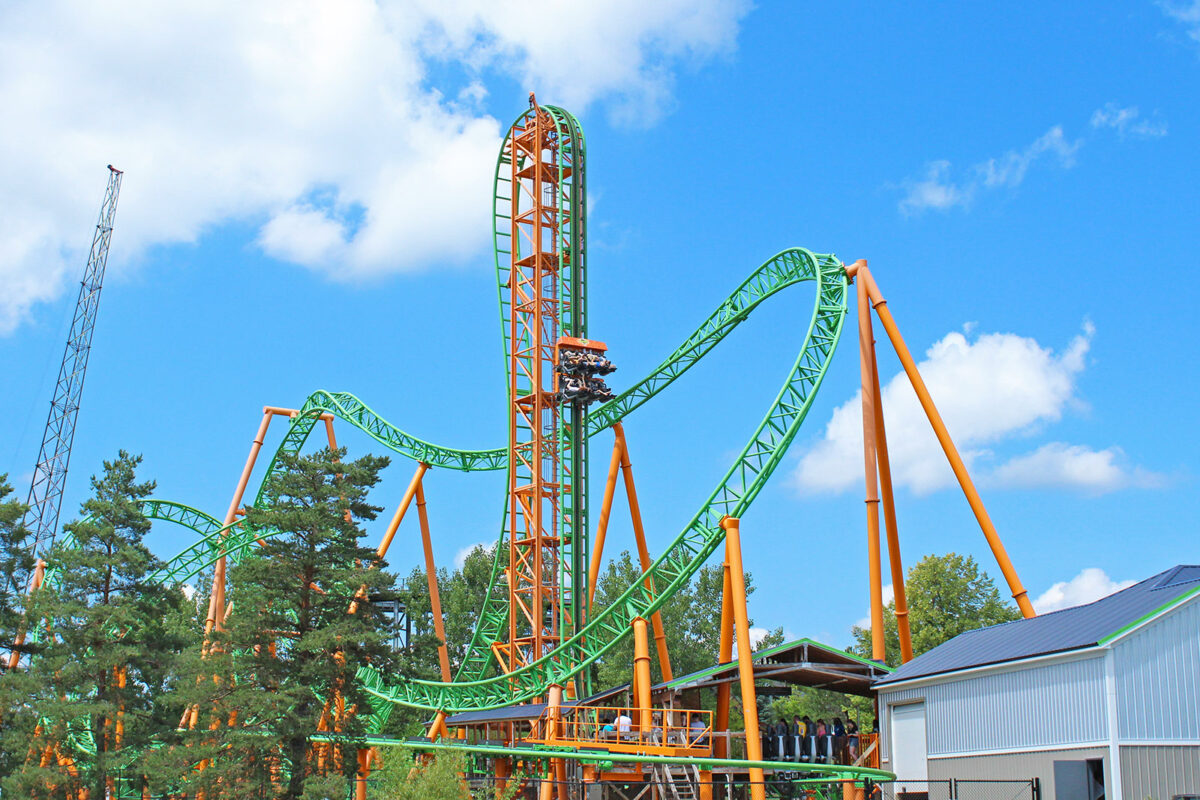 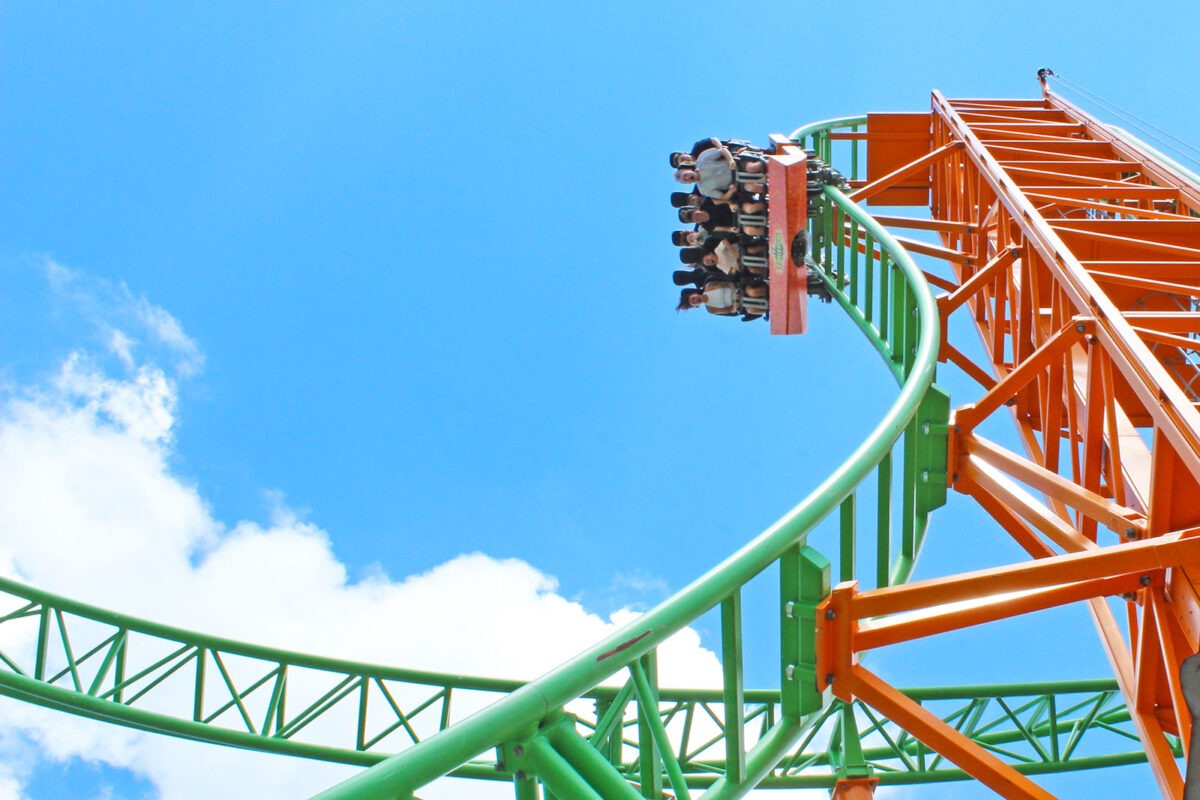 Although technically a clone, Tantrum offers a unique spin on the traditional Gerstlauer Euro-Fighter with its lap-bar restraints, open-air train design. These Gerstlauer coasters are always fun, so Tantrum is definitely worth a ride.

Opened in 1982, Viper was the first coaster in the world to feature five inversions, a record it held until 1987 when the six-inversion Vortex opened at Kings Island. The coaster stands 120-feet tall, yet its first drop is only 75 feet. However, don’t let that fool you, as the coaster gains speed as it dives into the double-inversion batwing element. The coaster enters each of the five inversions in rapid succession, so there is little time for a reprieve between. 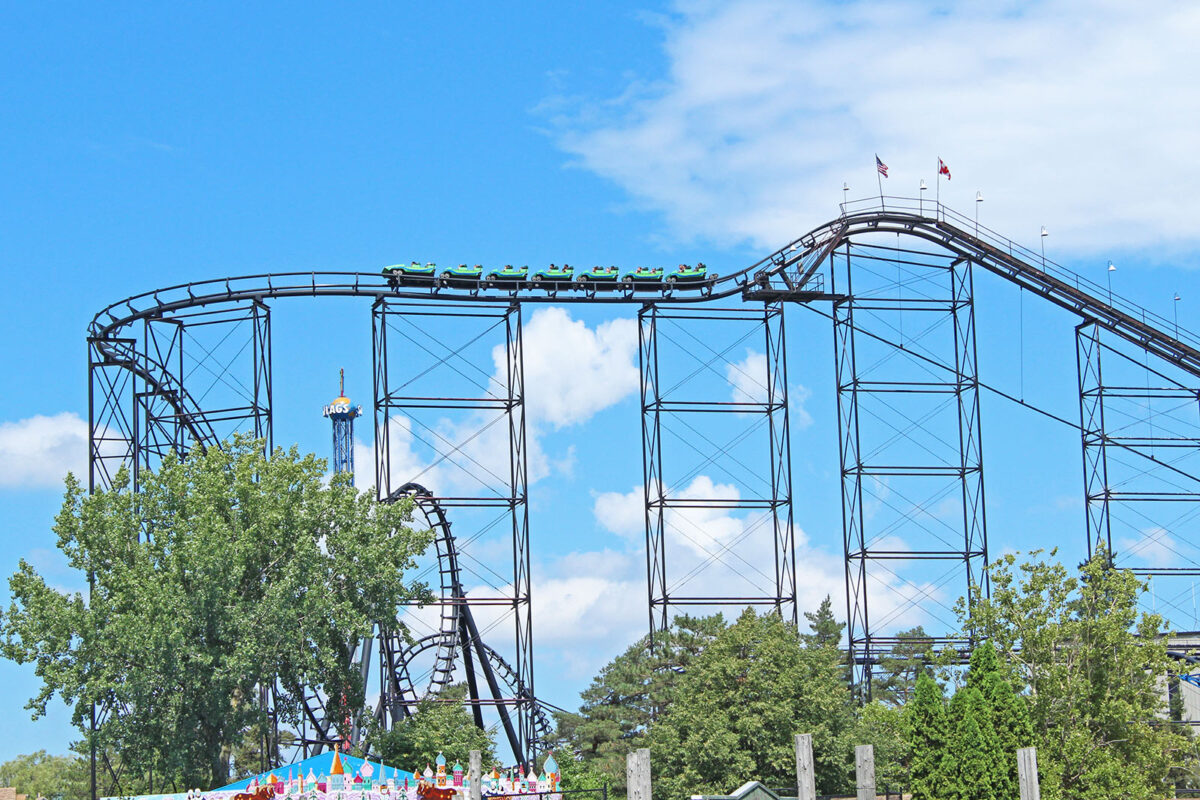 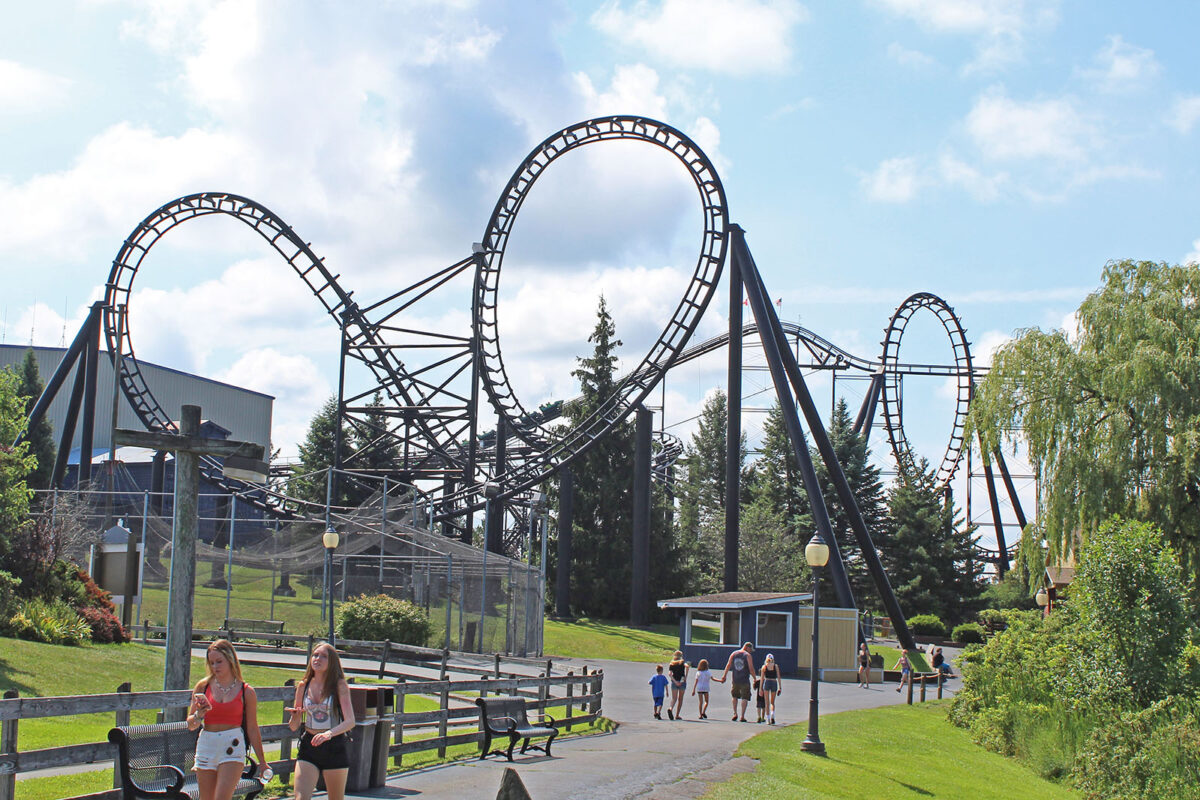 Viper is an increasingly rare steel Arrow looping coaster. Although it’s far from an unforgettable ride, definitely make sure it’s on your list when at Darien Lake as another season of operation is never guaranteed.

How would you rank your top 5 favorite Six Flags Darien Lake coasters? Any other thoughts on the park?

I think the top-3 are all ones I would happily ride again. Tantrum is just really fun, and had the best ops of the day. Ride of Steel is good, but it doesn’t really feel like anything amazing when there are many better hypercoasters out there. Definitely ride it, but it’s not worth a trip just for it. Predator, I was really surprised by. Great pops of airtime, and my first experience on a little bit of Titan Track.

Motocoaster was fun, but it’s in such a bad location, sitting on a concrete pad with nothing around it at all. The tight, wild mouse-like layout isn’t bad, but I don’t think is the best use of this kind of coaster. I like the swooping layout of Pony Express much more. After that I wouldn’t ride any of the coasters again if I didn’t have to, so Moose on the Loose gets the last spot!

Six Flags Darien Lake is an interesting park, no doubt — although many of its coasters are clones, the variety is impressive. You have a Euro-Fighter, a motorbike coaster, an Intamin hyper and a (mostly) wooden coaster with a section of innovative steel track. The park’s history has been a turbulent one with a variety of owners and operators — including two stints under the Six Flags name. Ride of Steel and Tantrum are definitely the standouts, but Predator was a surprise hit as was the surprisingly (but relatively) smooth Boomerang. Even Viper was fun. Overall, I enjoyed the day, especially with the crowds relatively light. I likely won’t return to the park in the near future, but I’m glad we made the trip.

I was surprised that Tantrum ended up being my favorite coaster but I’m starting to realize my favorite rides are ones with action packed pacing from smaller elements back-to-back. The giant helixes and flat stretches of track do nothing for me on Ride of Steel, although it does have the single most impressive moment of airtime on any of the coasters at the park. Plus, only having one train operation (and slow ops at that) on what should be your marquee attraction is just poor customer service, so it gets a knock down for that. Moto coaster is unique, Predator is forgettable, and the rest of the coasters I would never ride again.

This was a park that I was not expecting to be going to anytime soon but the trip out there to Niagara Falls and Canada’s Wonderland was a good reason to head here for the first time. I can tell the park is slowly upgrading and adding new additions compared to previous years, but it’s still a Six Flags corporate feeling park with ads everywhere. Tantrum was a good addition to the park that hadn’t seen a new coaster added since 2008, but overall even for a busy summer day, the park has suffered from budget cuts. One train operation was on all coasters but on Tantrum. Ride of Steel still holds up pretty well for its age, being older than Millennium Force. Titan Track being added on Predator was a pretty great addition and helped for a problematic section of the track, but didn’t help for the other part of it that hasn’t had much TLC for an old Dinn coaster. Overall, Darien Lake seems to be getting improvements at a slow rate, but operations does need an improvement.

Enjoy some of the highlights of our day with this video montage.

Do you agree with our ratings and rankings? Let us know in the comments section below!