Recently, we were invited to Carowinds for a preview of SCarowinds,  one of the premier Halloween events in the Carolinas. The 21st edition of the park’s Halloween Haunt features five terrifying mazes, including the all-new Paranormal, Inc., seven unnerving scare zones, and spooky live entertainment lurking around every corner. 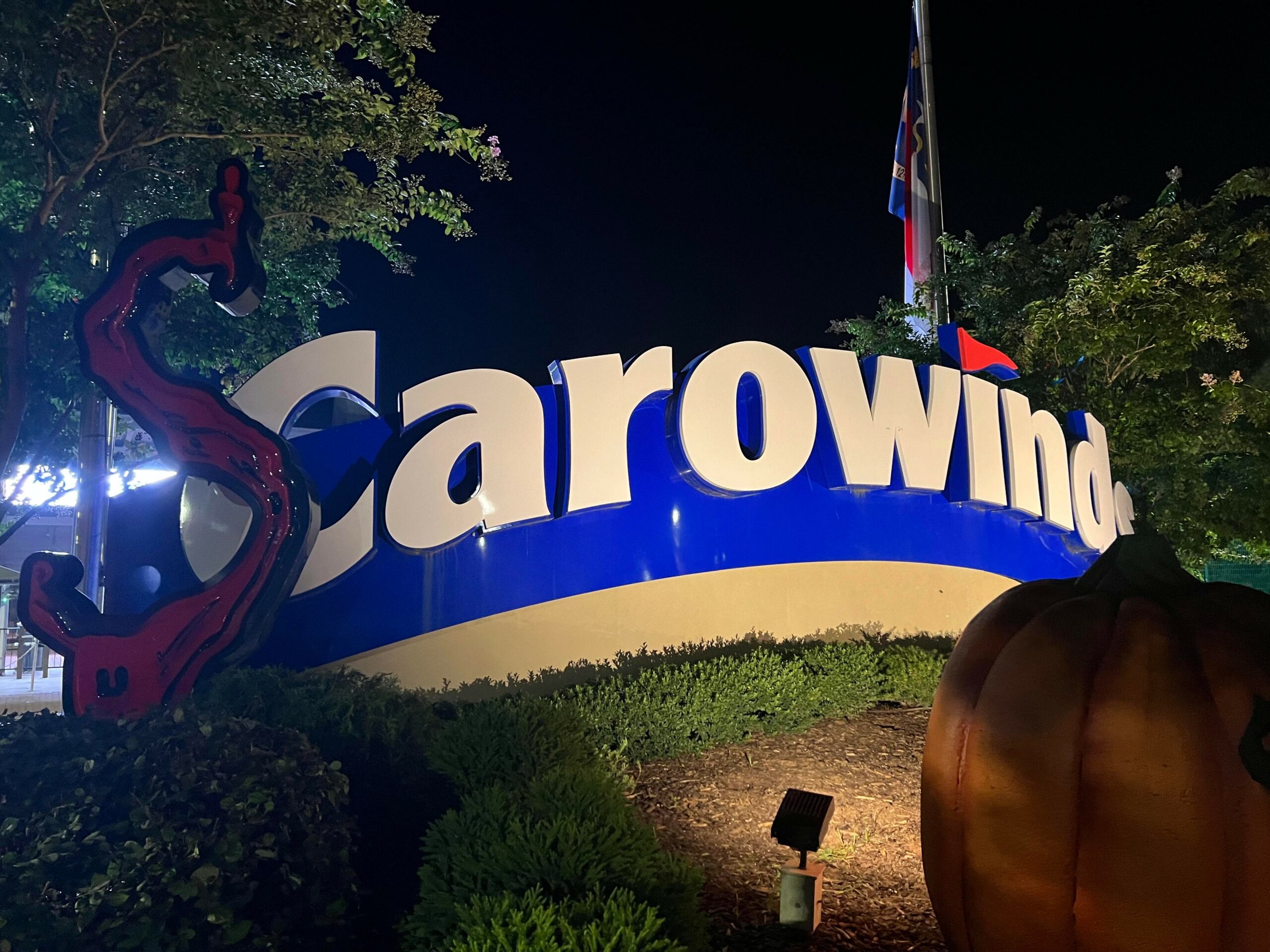 As part of the preview, we had the opportunity to experience a little more than the traditional SCarowinds guest, and learned a bit more about what goes into each night. 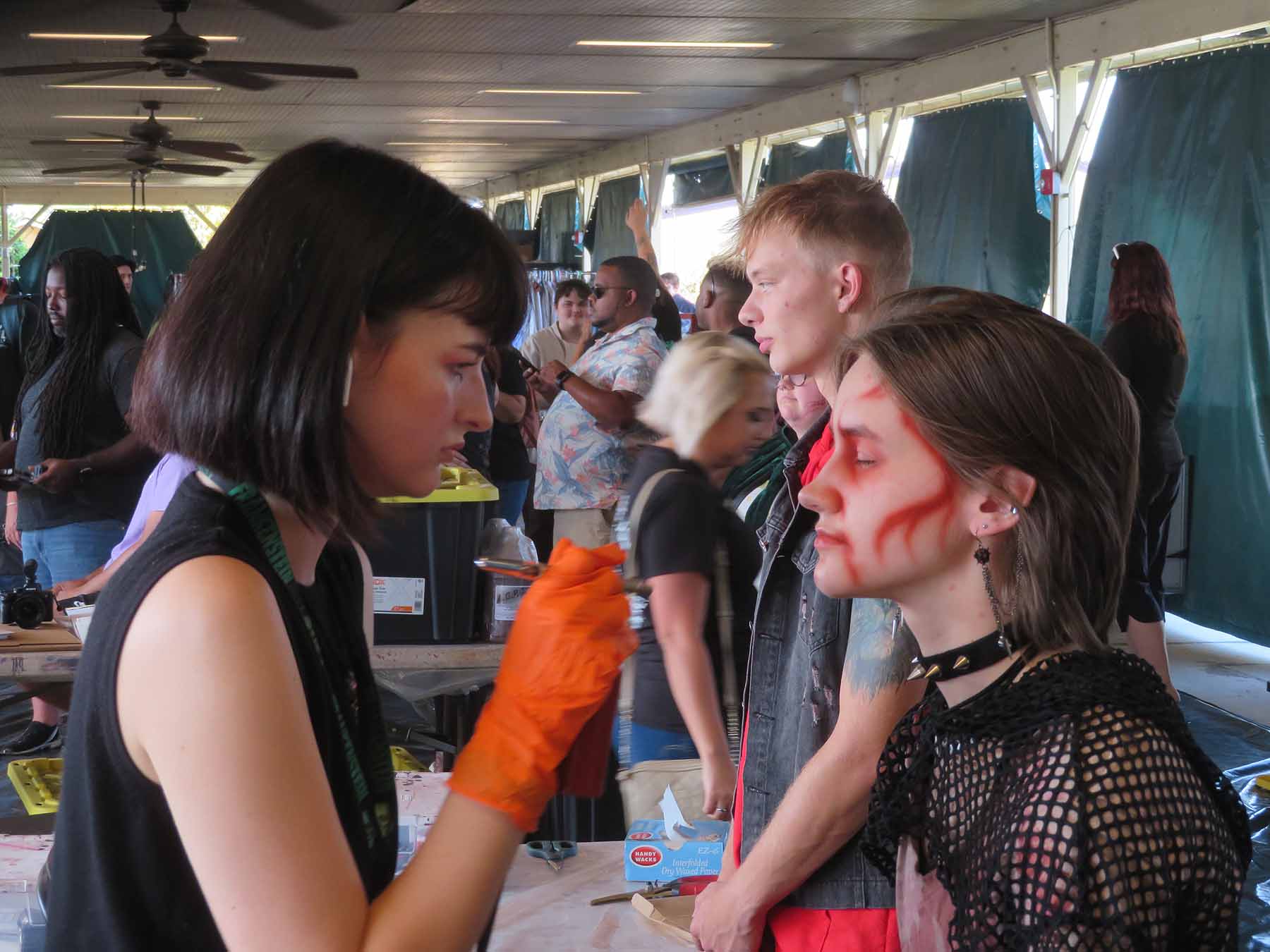 Each night of SCarowinds, the park’s more than 300 scare actors begin their nights at Monster Central, which is located inside of Carowinds’ Grove picnic area. Inside the pavilion, each of the monsters get their costume, make-up, and hair, along with any necessary props that the actors might need. 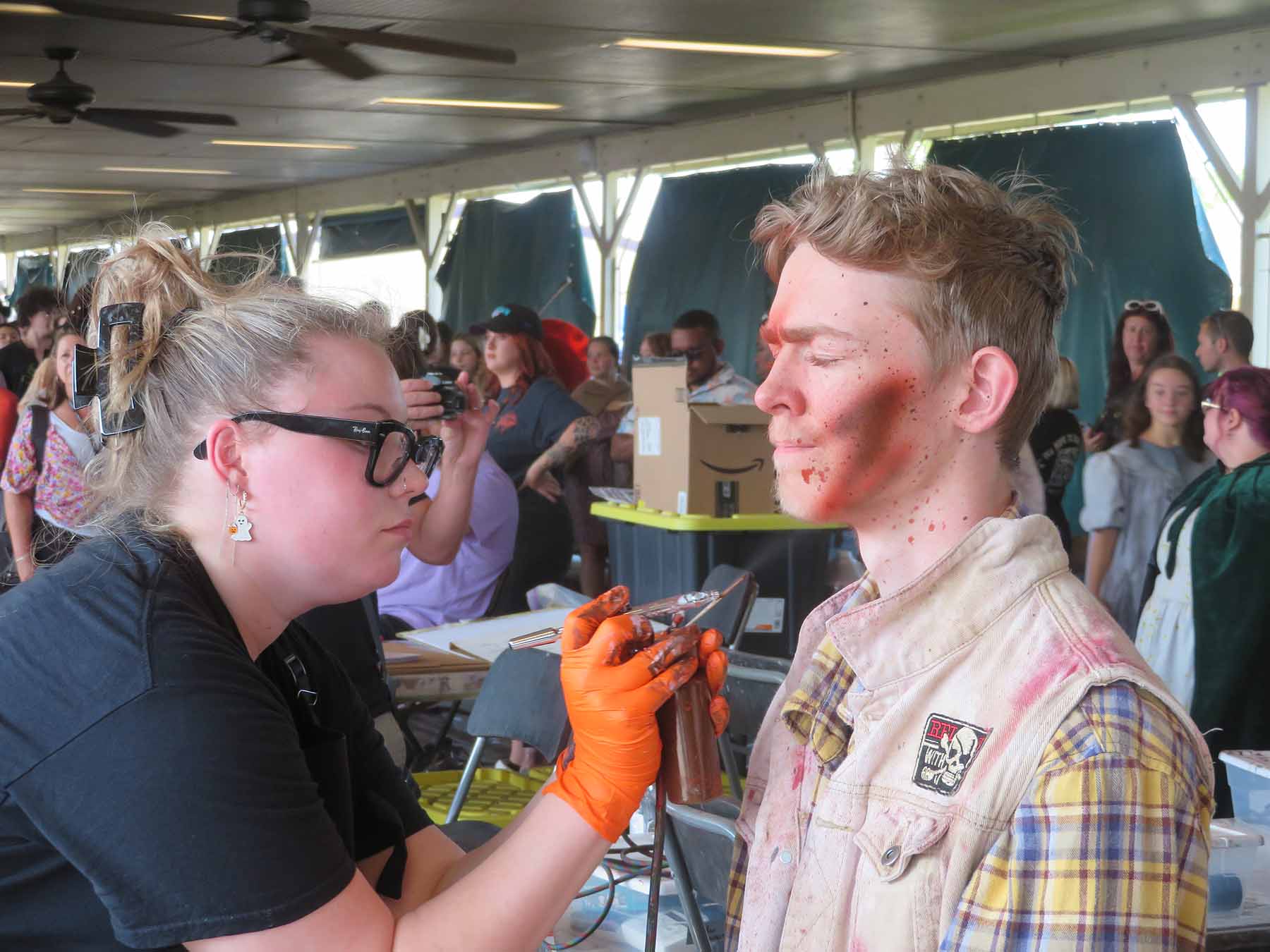 Seeing Monster Central in person was quite the spectacle. Dozens of makeup artists, hairstylists, and costumers were on hand to make sure that each “Monster” had everything they needed to be as terrifying as possible. 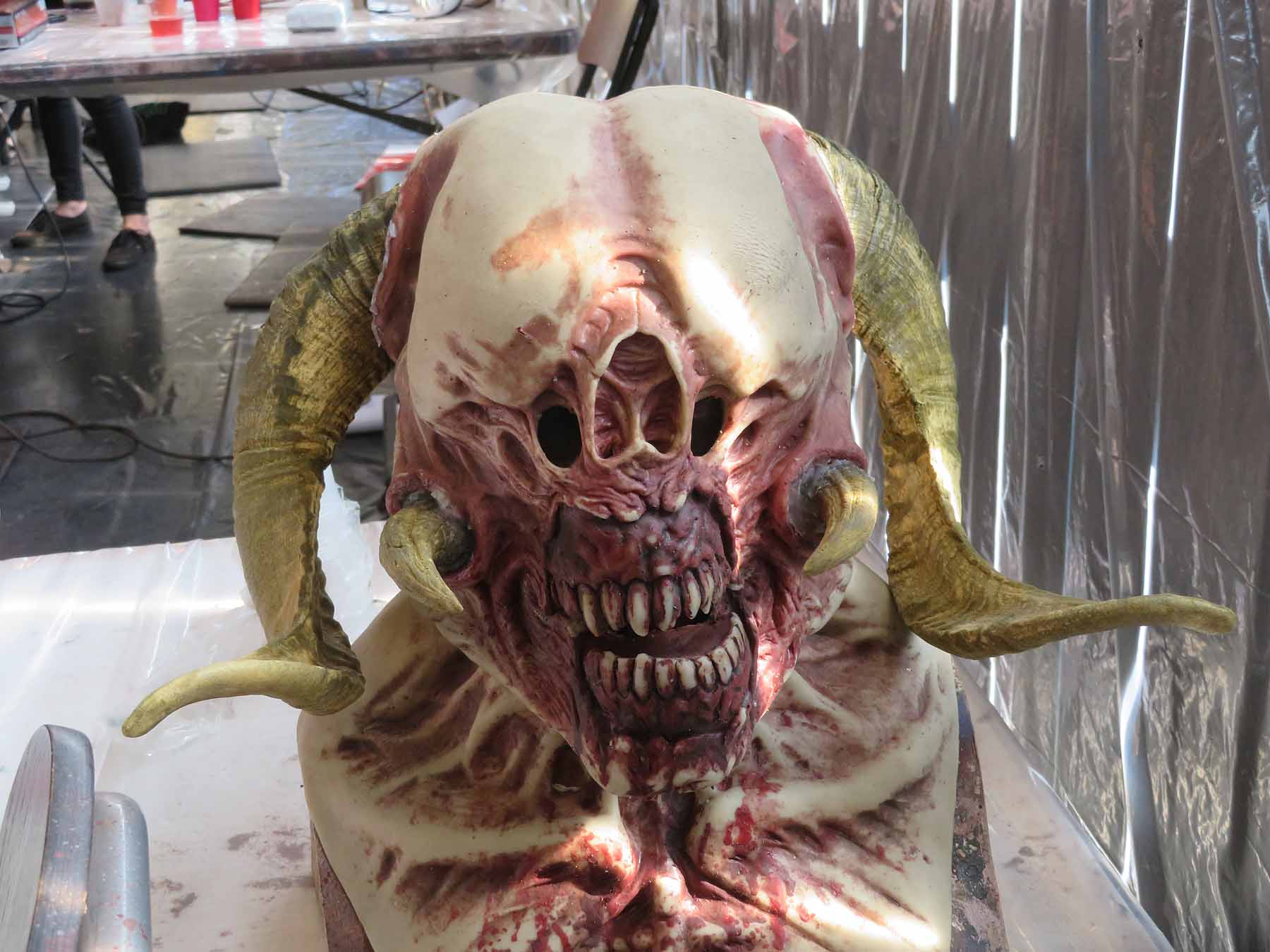 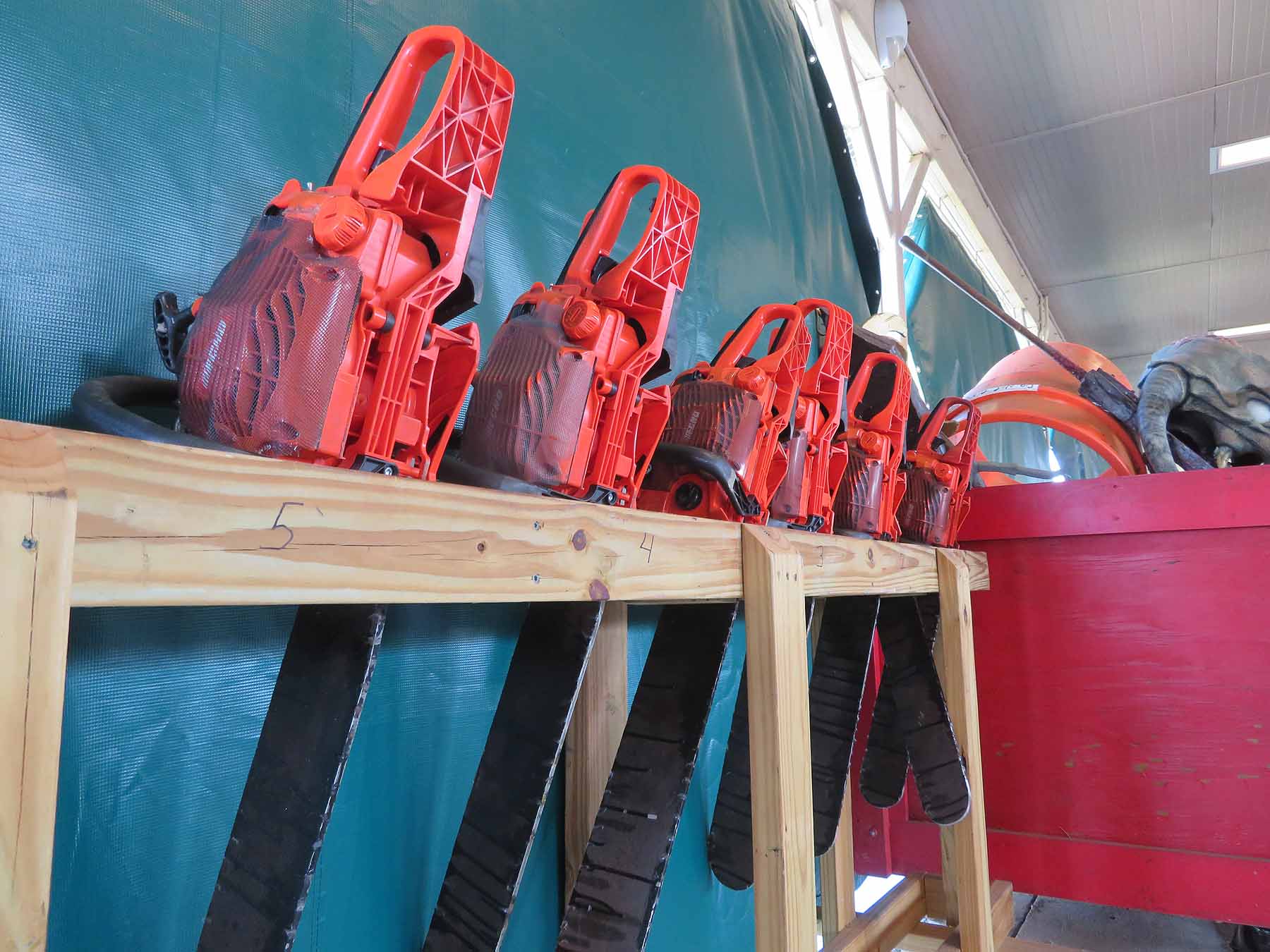 It’s not just make-up and hair — as Monster Central has masks and props ready for the scaring! 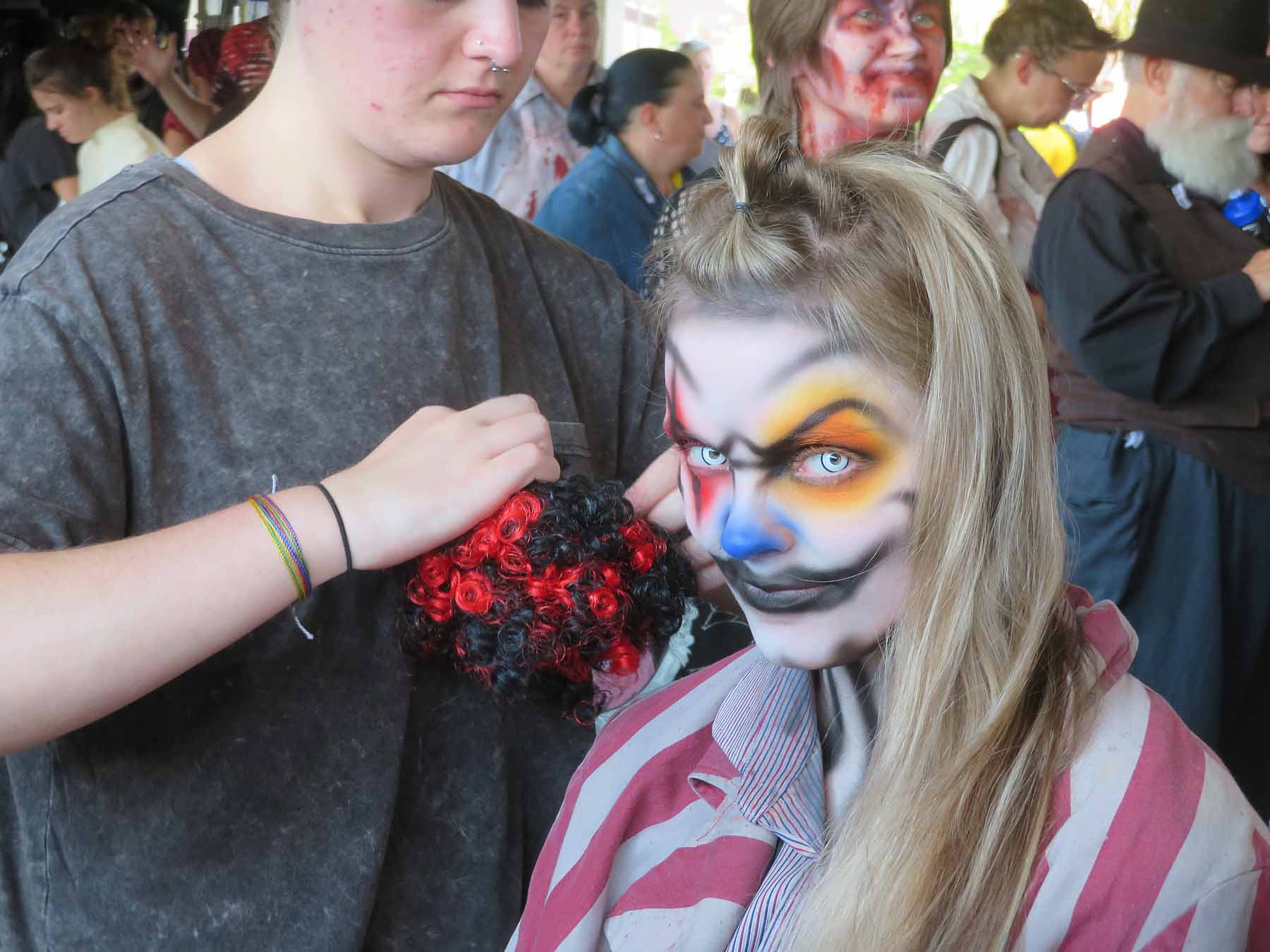 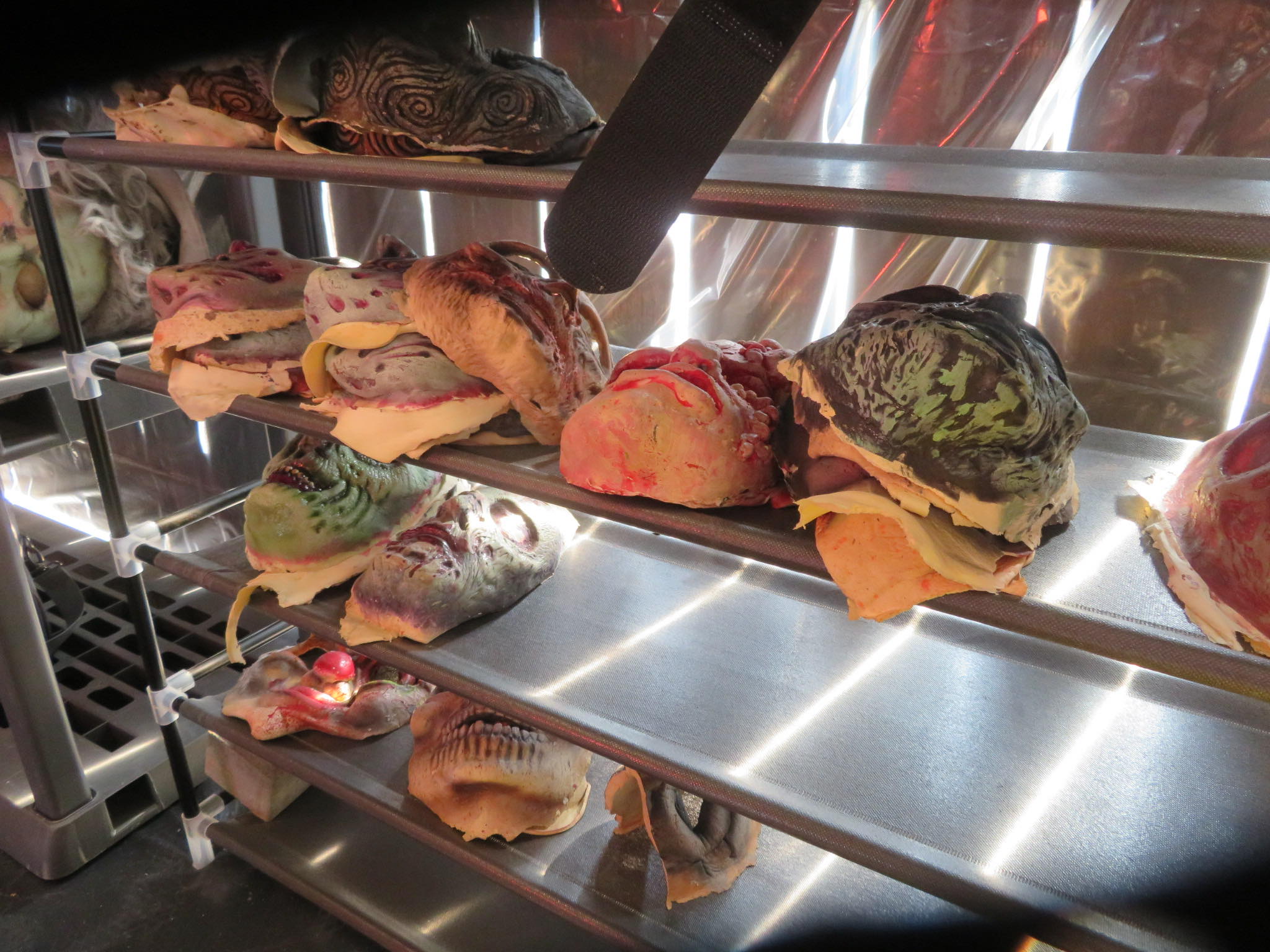 In total, Carowinds told us it takes about three hours to process 300 monsters each night of SCarowinds. 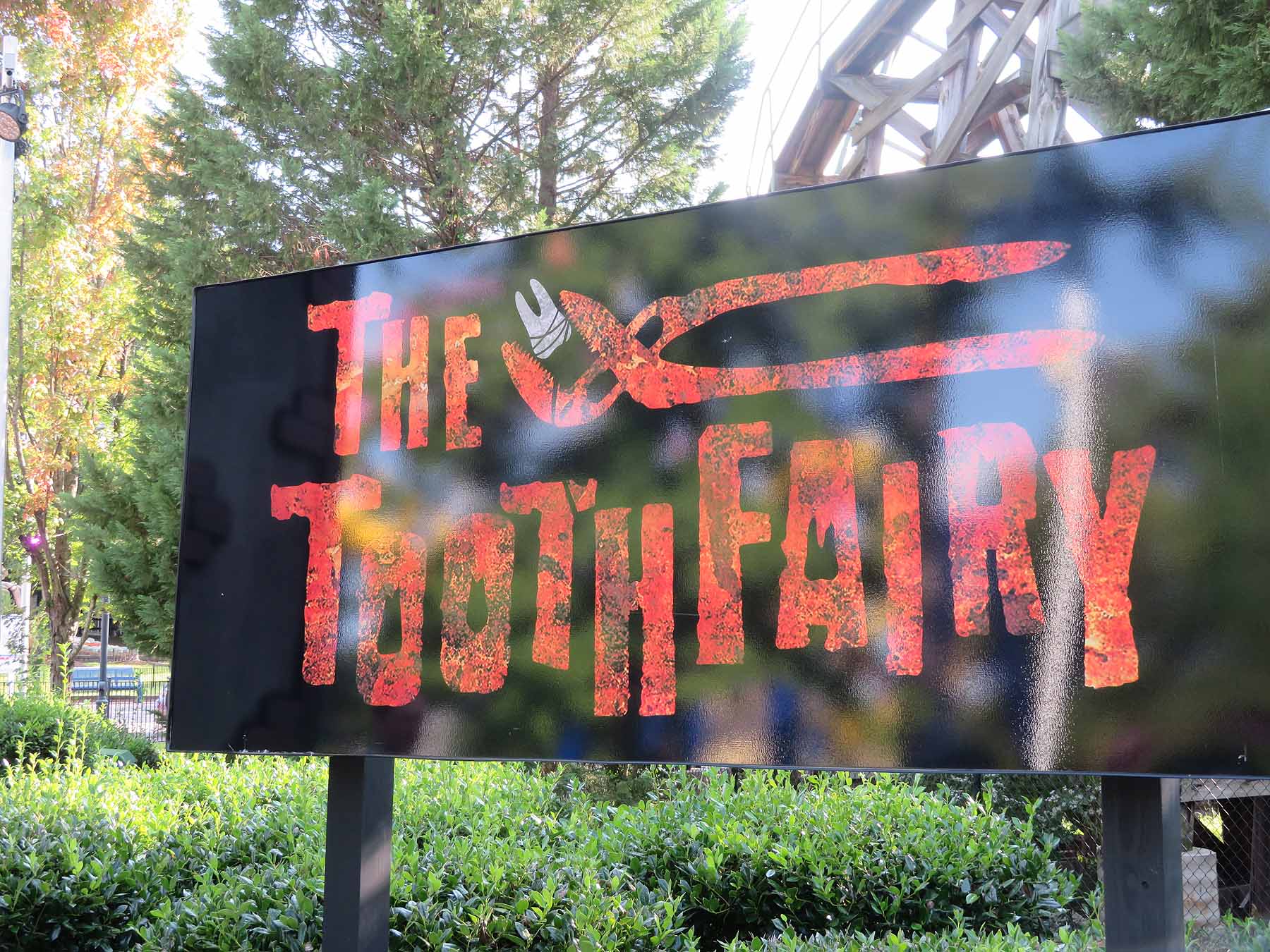 As part of the media preview, we got the chance to take a “lights-on” tour of SCarowinds’ Tooth Fairy maze, which made its debut in 2021. The tour had two parts – first, we walked through the maze with the “lights on” in order to see the level of detail found throughout the maze. (We took a similar tour last year — and the detail you notice in the light that 98% of guests won’t notice in the dark is truly incredible — Check it out!) 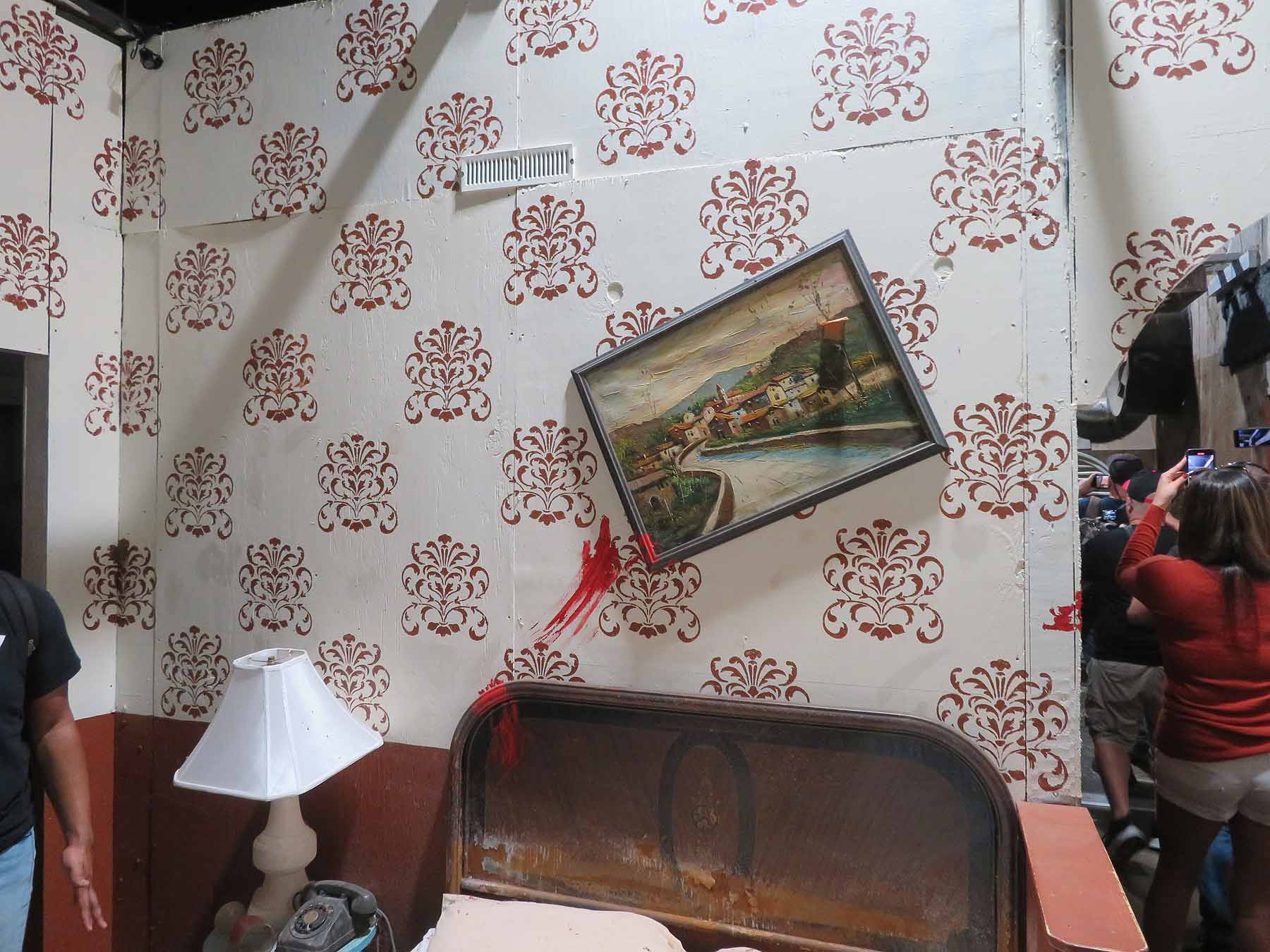 Carowinds’ Director of Live Entertainment Ryan Allen was on-hand to tell us about all of the details we might have otherwise have missed! 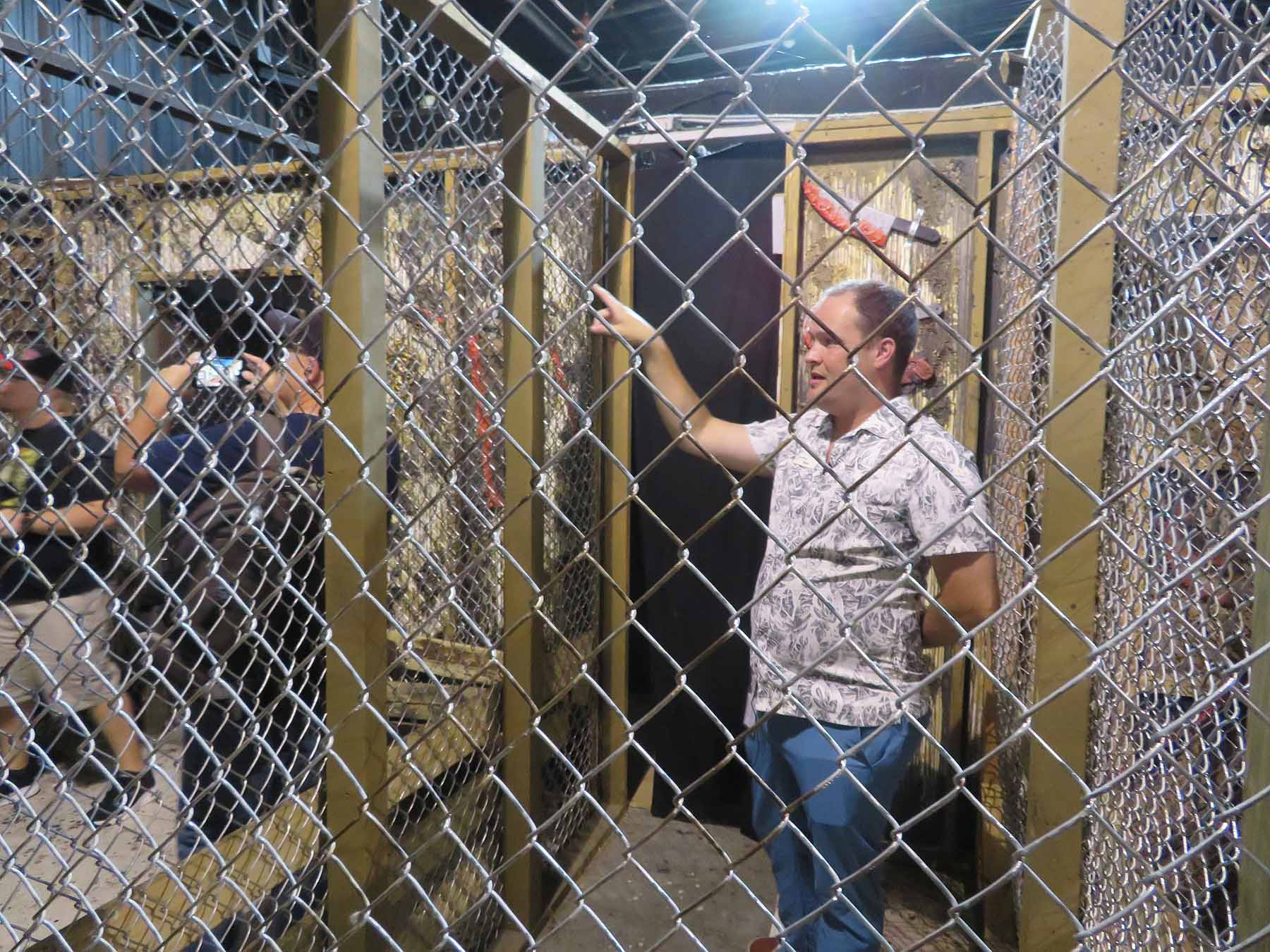 Following the “lights-on” tour, we got a different kind of “lights on” tour — this one with the show lighting and audio in full effect — however, with no scare actors inside the maze. It was an excellent way to witness how the space was transformed thanks to lighting and theatrical effects. While filming inside mazes isn’t allowed during SCarowinds, the park kindly allowed us to film during this preview.

We would go through the maze later that night with actors in the maze. It’s awesome seeing how everything comes together with scenic, lighting, effects, and actors! 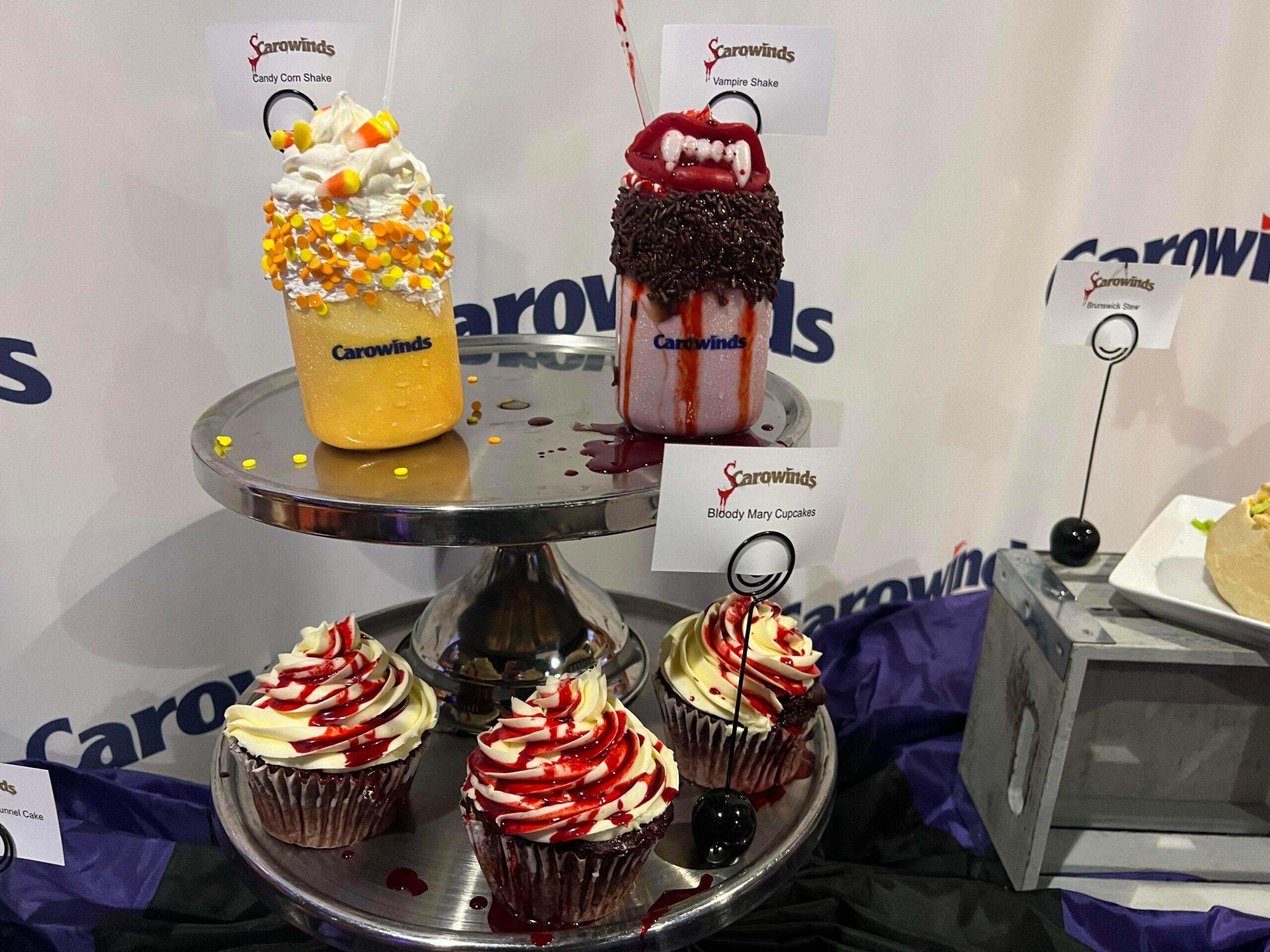 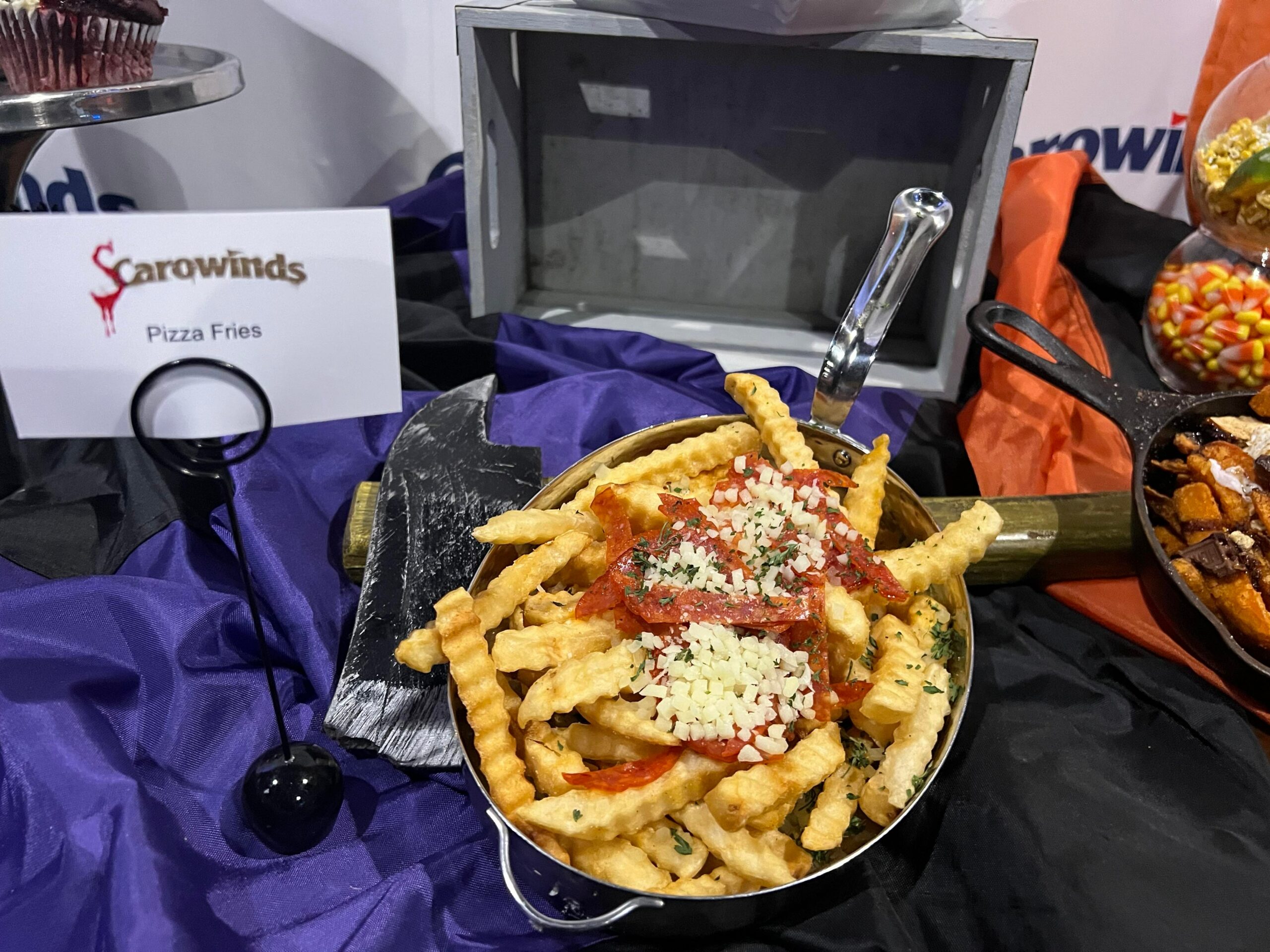 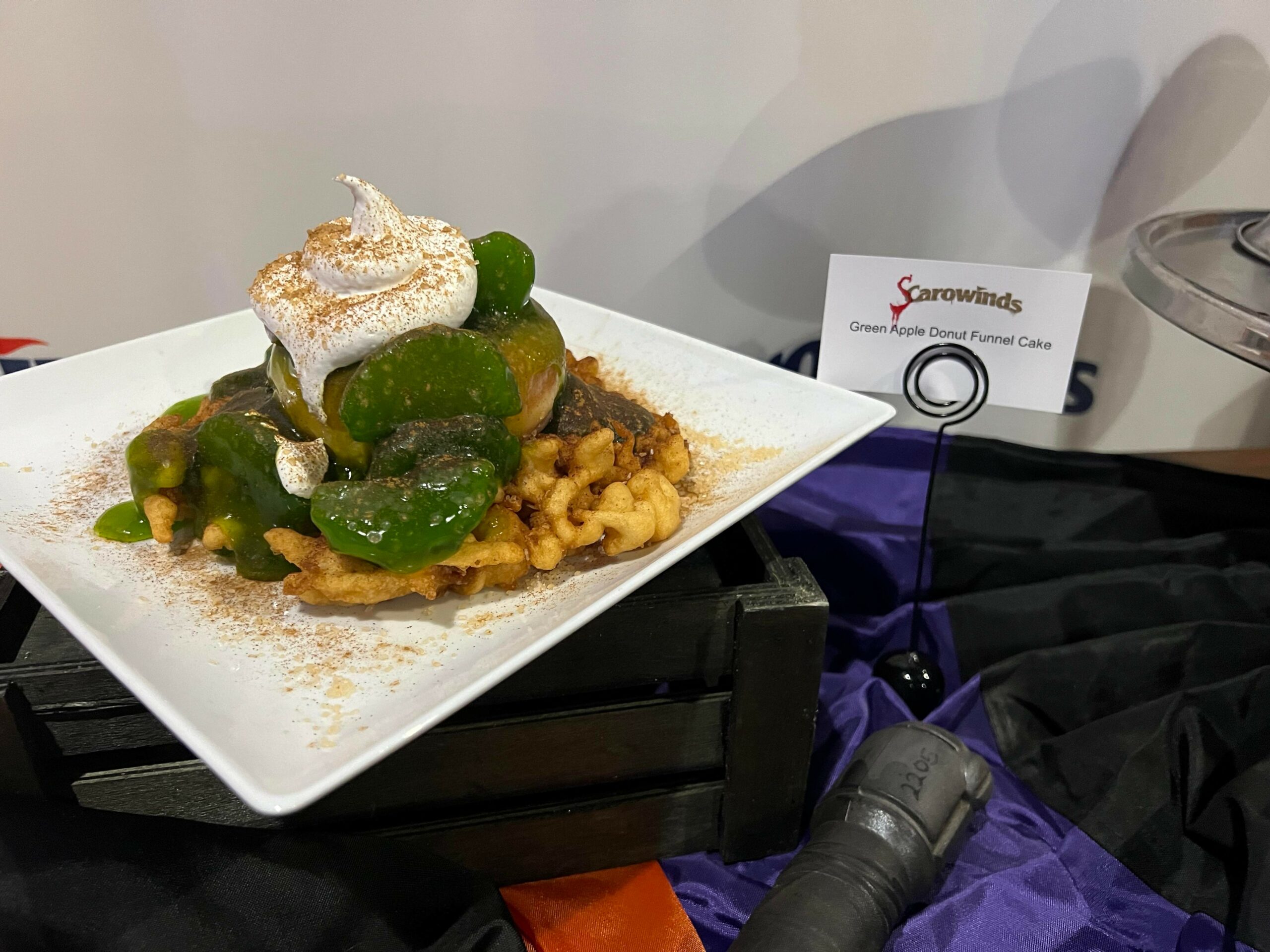 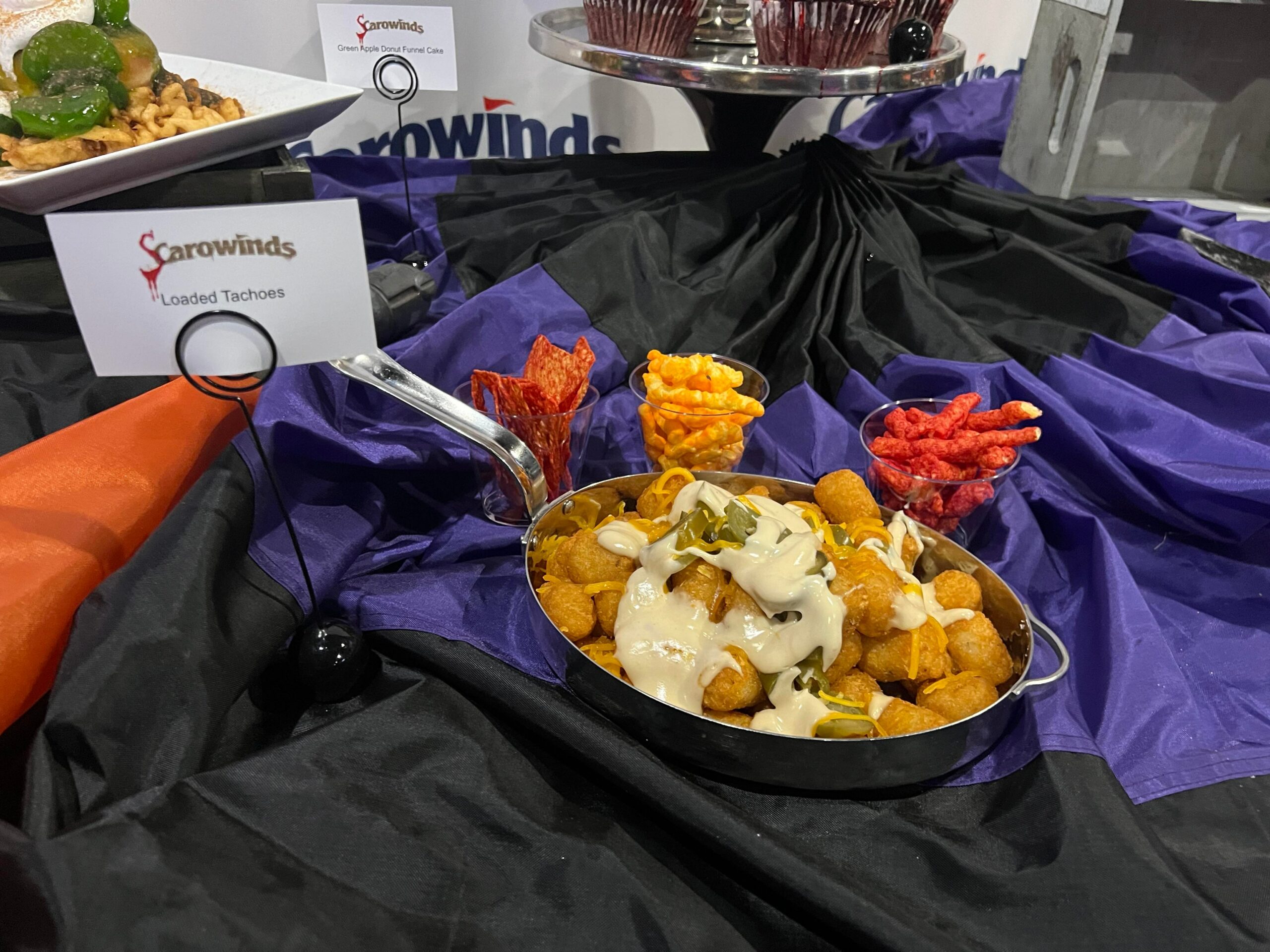 We had the chance to sample a few of the offerings, and the clear winners for me were the “Esquites,” a street corn-esque dish, Mozzarella Planks, and the Witches Brew specialty cocktail, which had a bourbon base, but was somehow green in color. 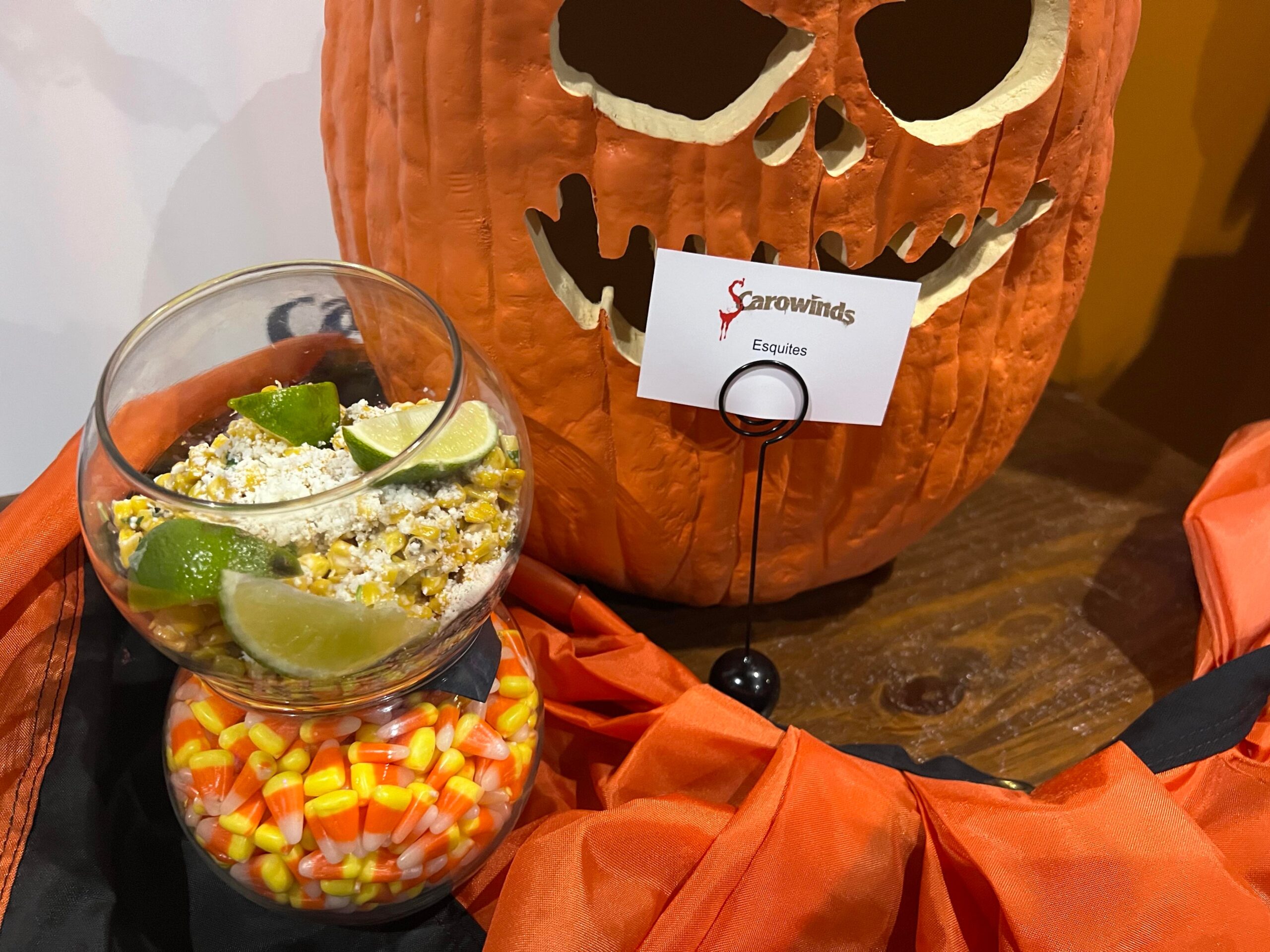 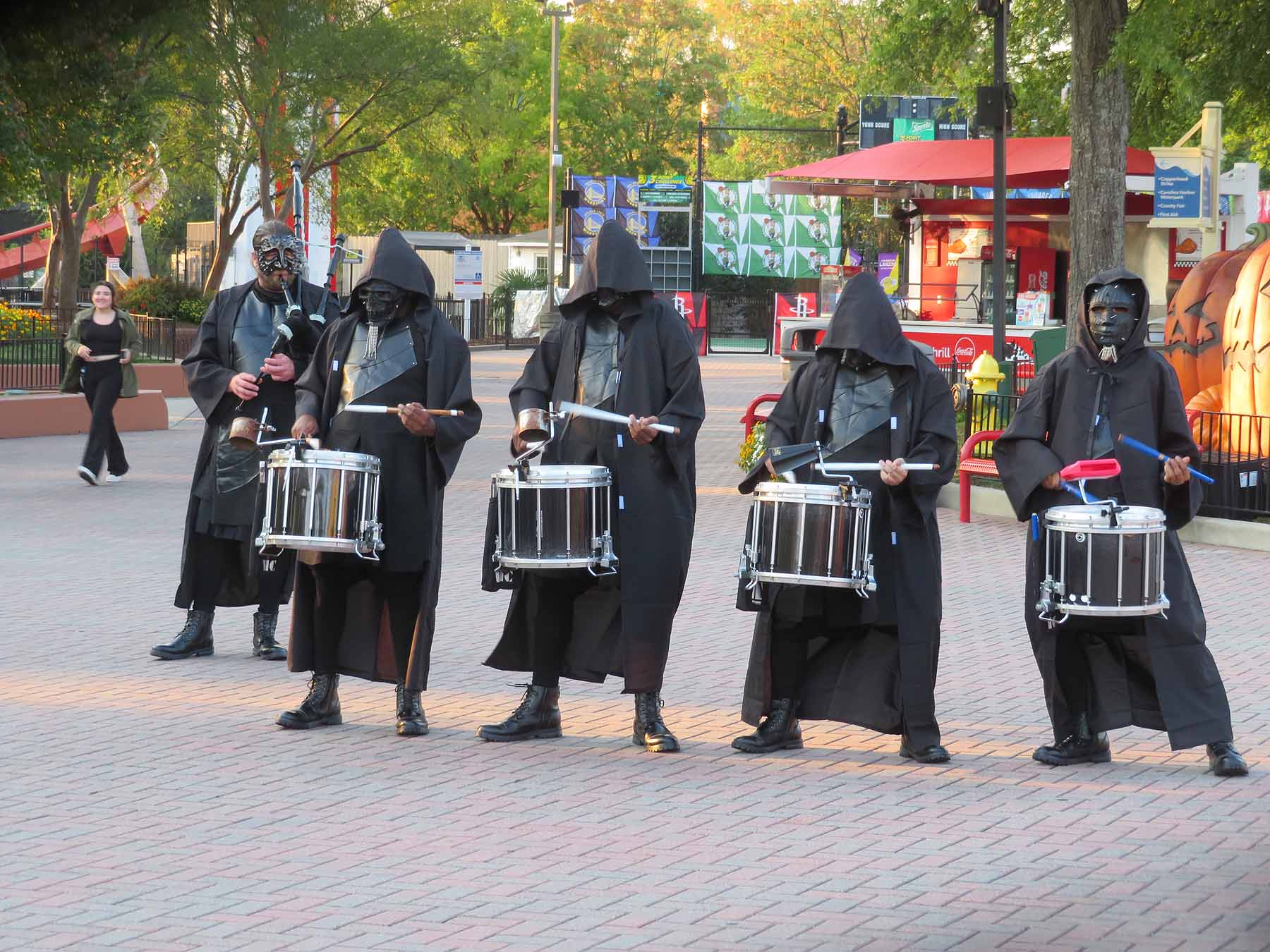 As part of the preview, each of the SCarowinds shows, both scheduled and unscheduled, held a rehearsal during the visit. The first entertainment we encountered was an unnamed “Pipe and Drum” band, who we learned would typically pop up around the park six or seven times a night. The best way to describe the show was “unique,” and I think it really needs a name. I’m going to suggest “Sgt. Piper’s Lonely Hearts Drum Band,” and call it that until someone tells me to stop. 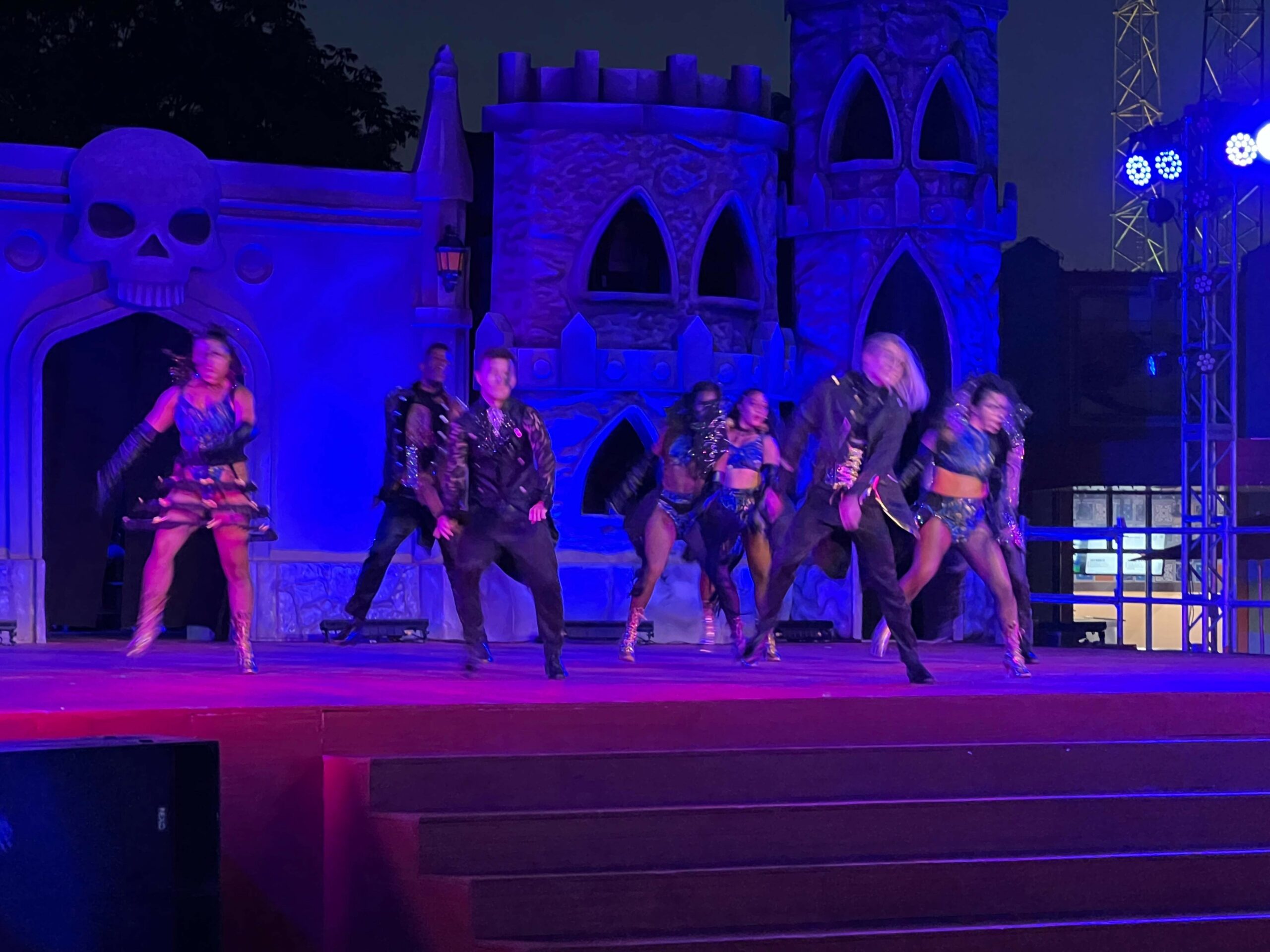 Following up last year’s “Queen’s Ball,” (still one of my favorite theme park shows of all time.) is the all-new “Heads Will Roll.” While I only managed to catch the last half or so of the rehearsal for this show, it picks up where Queen’s Ball left off — an energetic soundtrack, expert choreography, and a dynamic main character (with incredible main character energy) in Queen Sceleratus. There’s a little bit of everything music wise, including Beyonce, Madonna, Lady Gaga, and yes, the titular “Heads Will Roll” remix makes an appearance. Another Carowinds’ live entertainment offering that is a home run, and will be a hit for park guests. 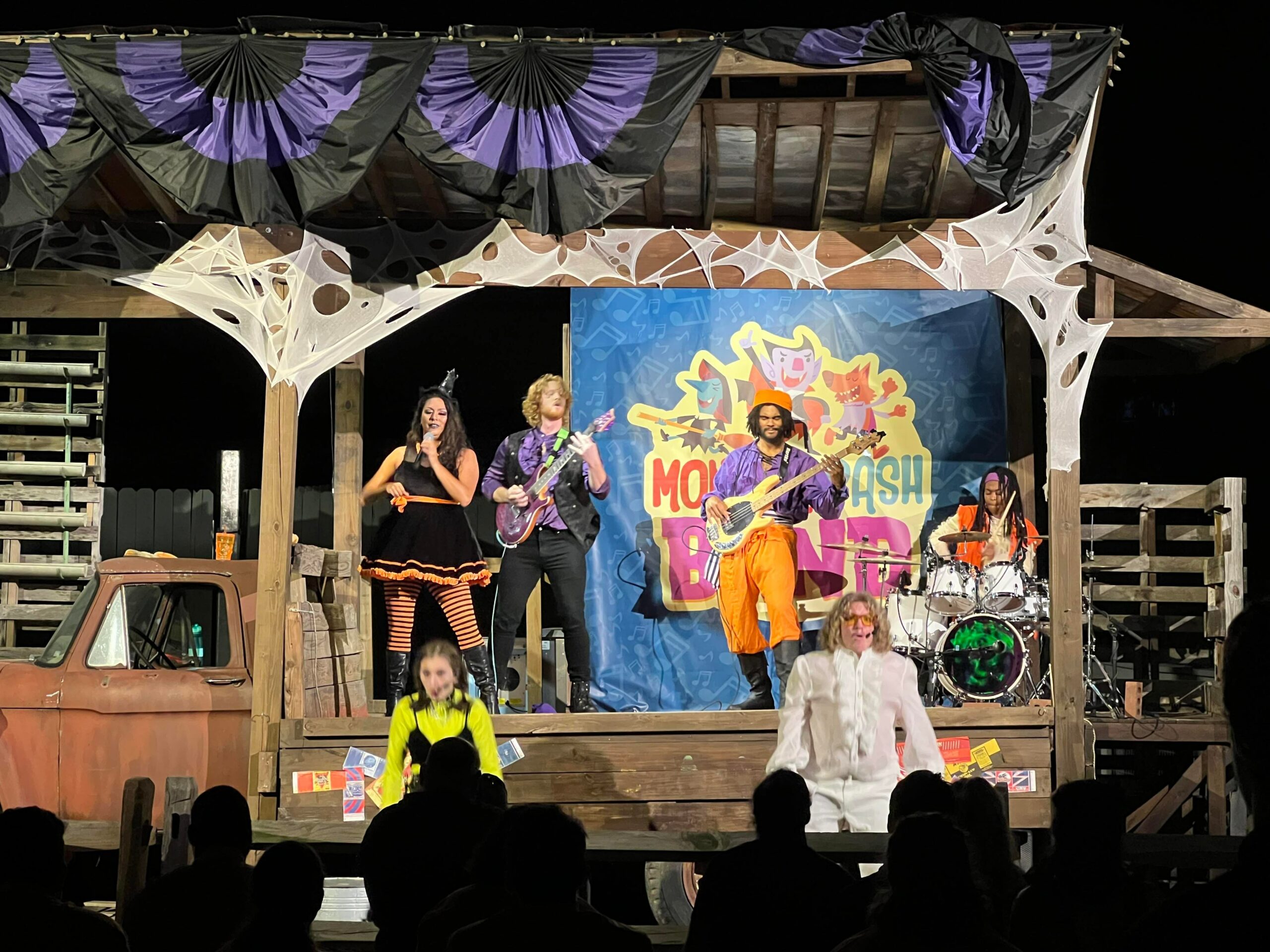 Other entertainment offerings include the more light-hearted Monster Bash Band and No Bones Band (both from our friends at JM Music Design). I caught a little bit of Monster Bash, who sang “spooky” pop songs, and No Bones relies more on Brass Instruments. Below, was also a quick image of “The Lost Souls,” who have taken up residency in the Blood Yard scarezone, and have a distinctly more “metal” performance — they led off with a Rob Zombie cover. If you’re attending SCarowinds for music, there’s no shortage of talented musicians. 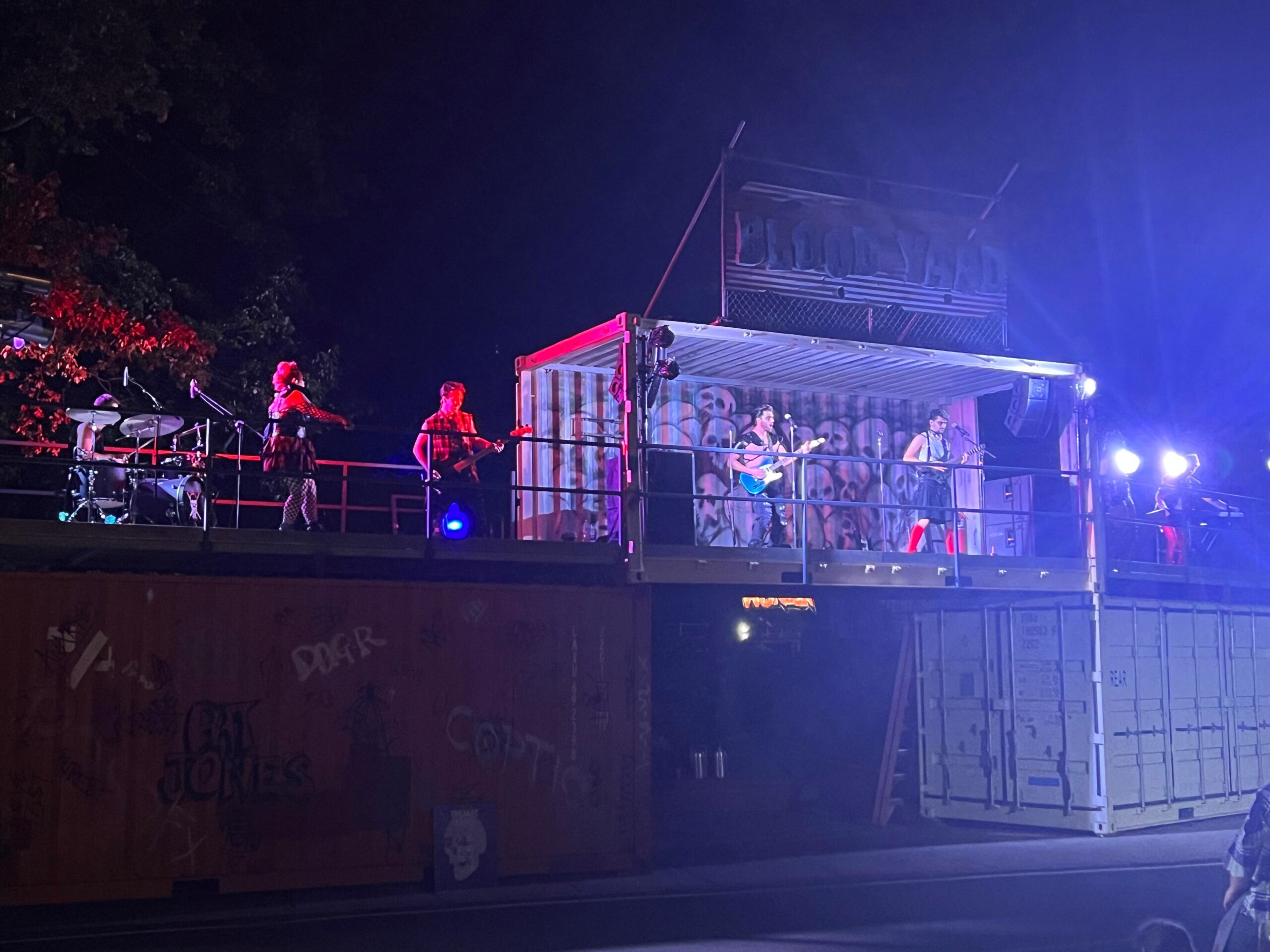 In the new “Harlequin Club” scare zone, a trio of acts took the “Mane Stage.” According to Carowinds, “With acts including The Vicious Sisters and The BonBons, you will not want to miss the burlesque performers, and sideshows” on the Mane Stage. 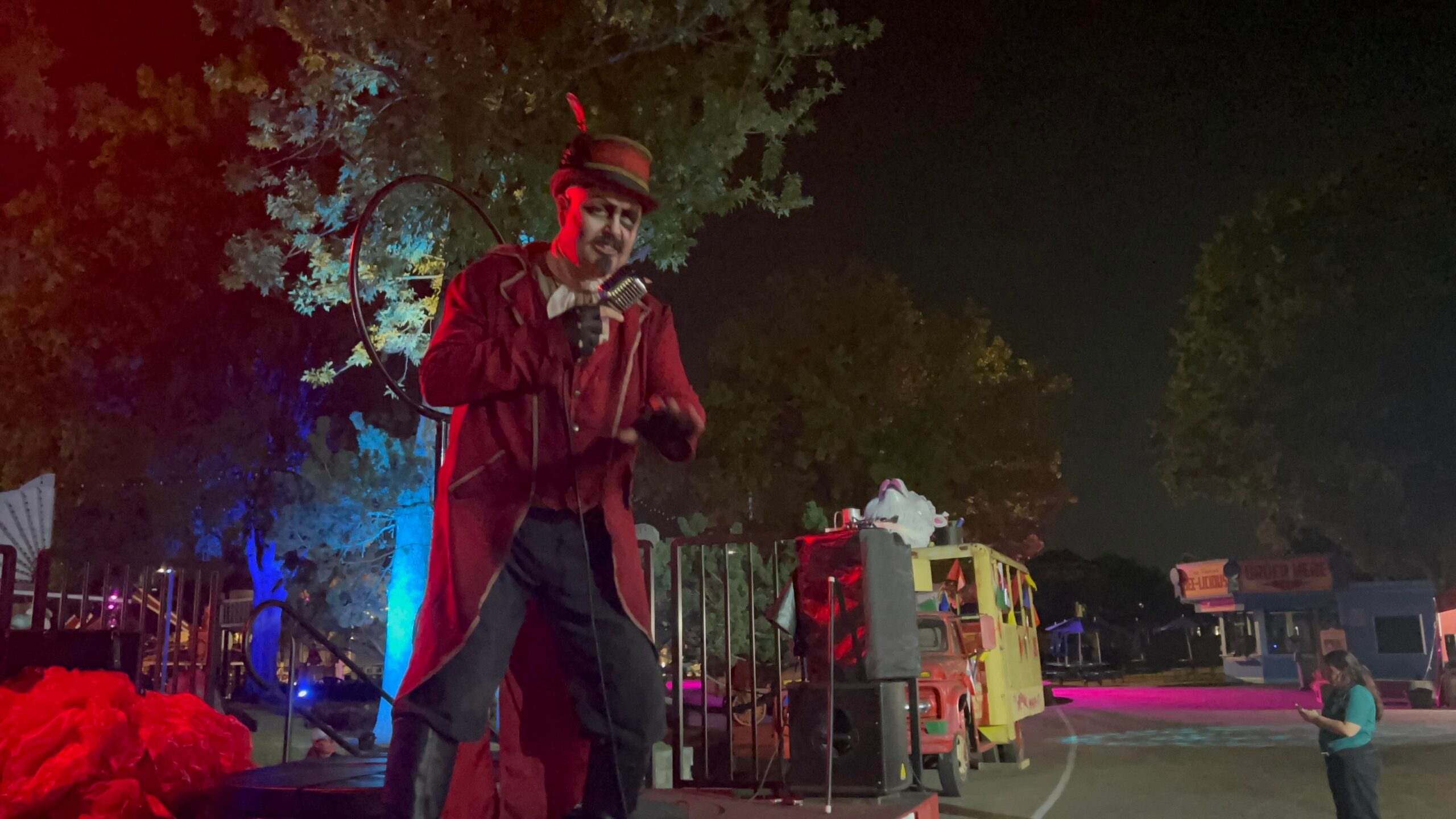 During our visit, we made it through four of SCarowinds’ five mazes, and six of the seven scare zones. While the aforementioned Tooth Fairy, along with Slaughter House, Depths of Darkness, and Silver Scream Studios: Condemned all return this year (check out our past reviews of SCarowinds for reviews of these mazes over the years: 2021 | 2018 | 2017 | 2016 | 2015!), the stand out maze was the new Paranormal Inc., which arrives at SCarowinds after a run at Knott’s Scary Farm. 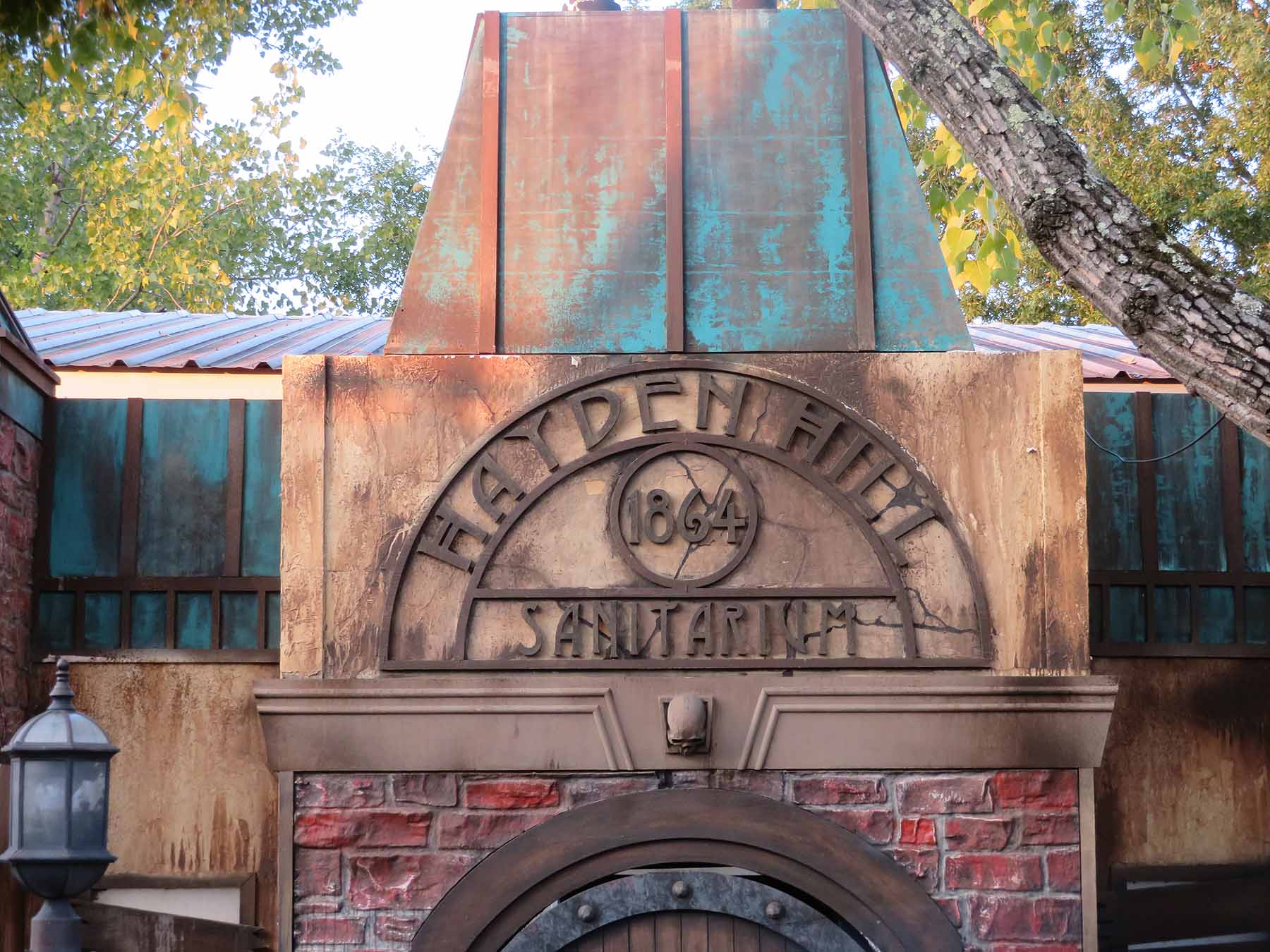 Per SCarowinds’ lore, guests will “Embark on a bizarre and paranormal adventure as you investigate Hayden Hill, an abandoned hospital where patients were tortured for decades by deranged doctors and nurses. Demonic spirits of the murdered victims have been detected throughout the mysterious halls, while evil medical staff prowl for new patients to torture.”

While we won’t spoil the maze, we can safely say that it was incredibly well done. SCarowinds does a great job of telling the story of Paranormal, Inc. throughout the maze, and it has some awesome set pieces and scare moments. 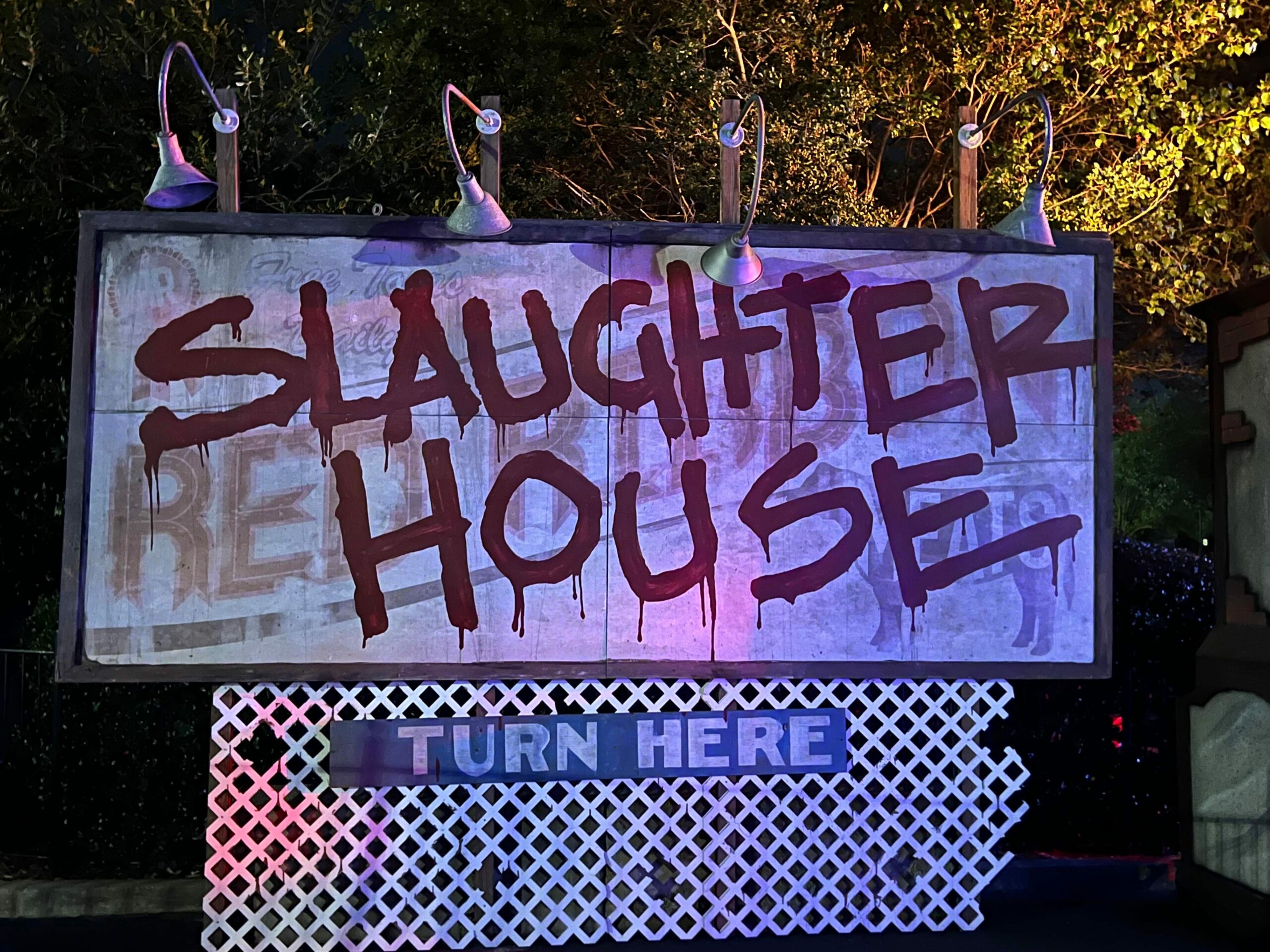 Given that it was effectively a dress rehearsal and staff preview night during our previews, I don’t think I can give a full run-down of the additional mazes and scarezones as I’ve done in years past. With the exception of Slaughterhouse, there didn’t seem to be as many scare actors that would typically be in a maze or scare zone. As SCarowinds staffs up throughout the season, this will probably change.

I did walk through Silver Scream Studios effectively alone, which resulted in some good scares, but given lines on any night, I don’t think this is an experience that anyone will be able to accomplish. 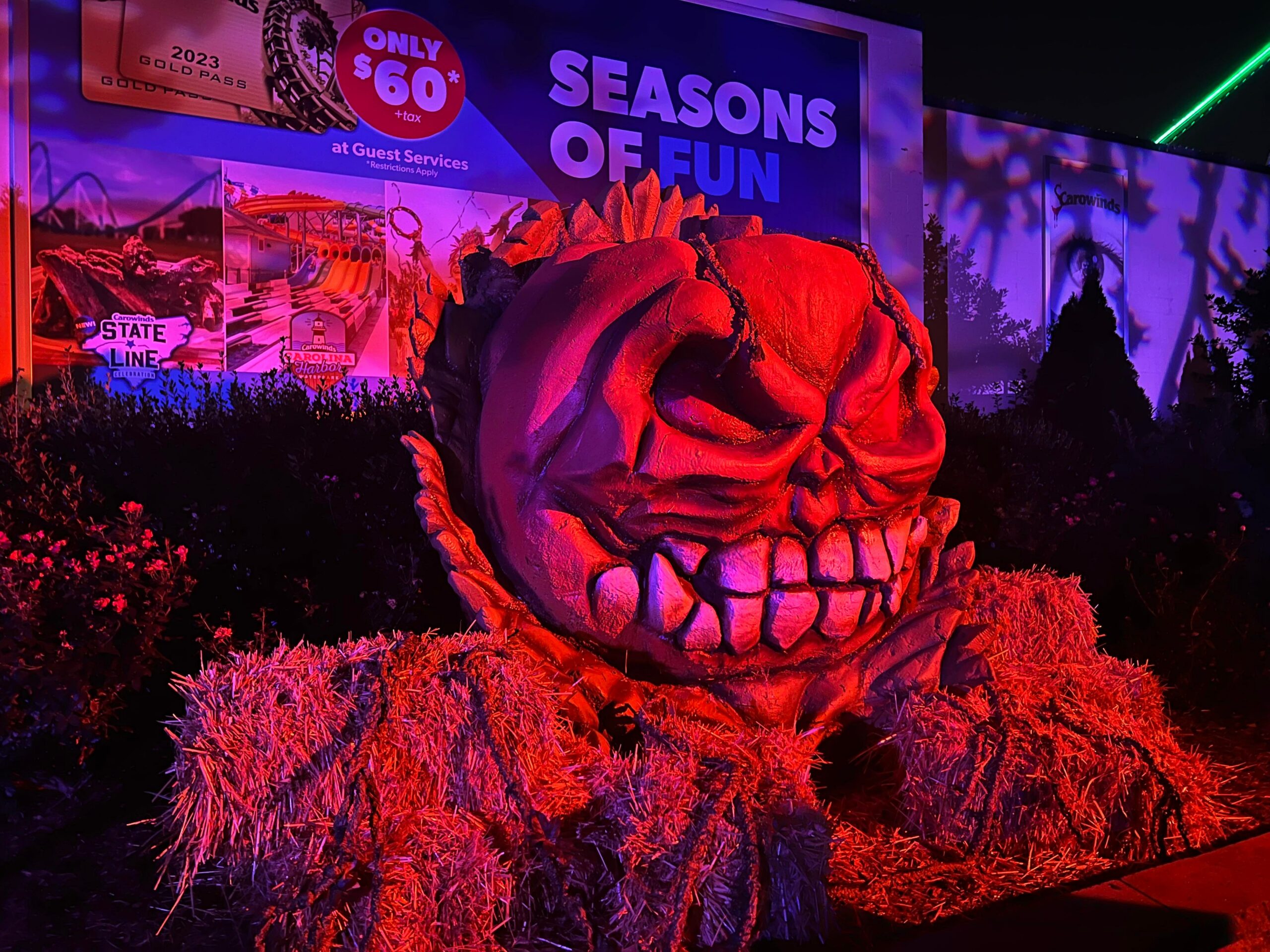 Quick rankings based through walk-throughs of mazes and Scare Zones: 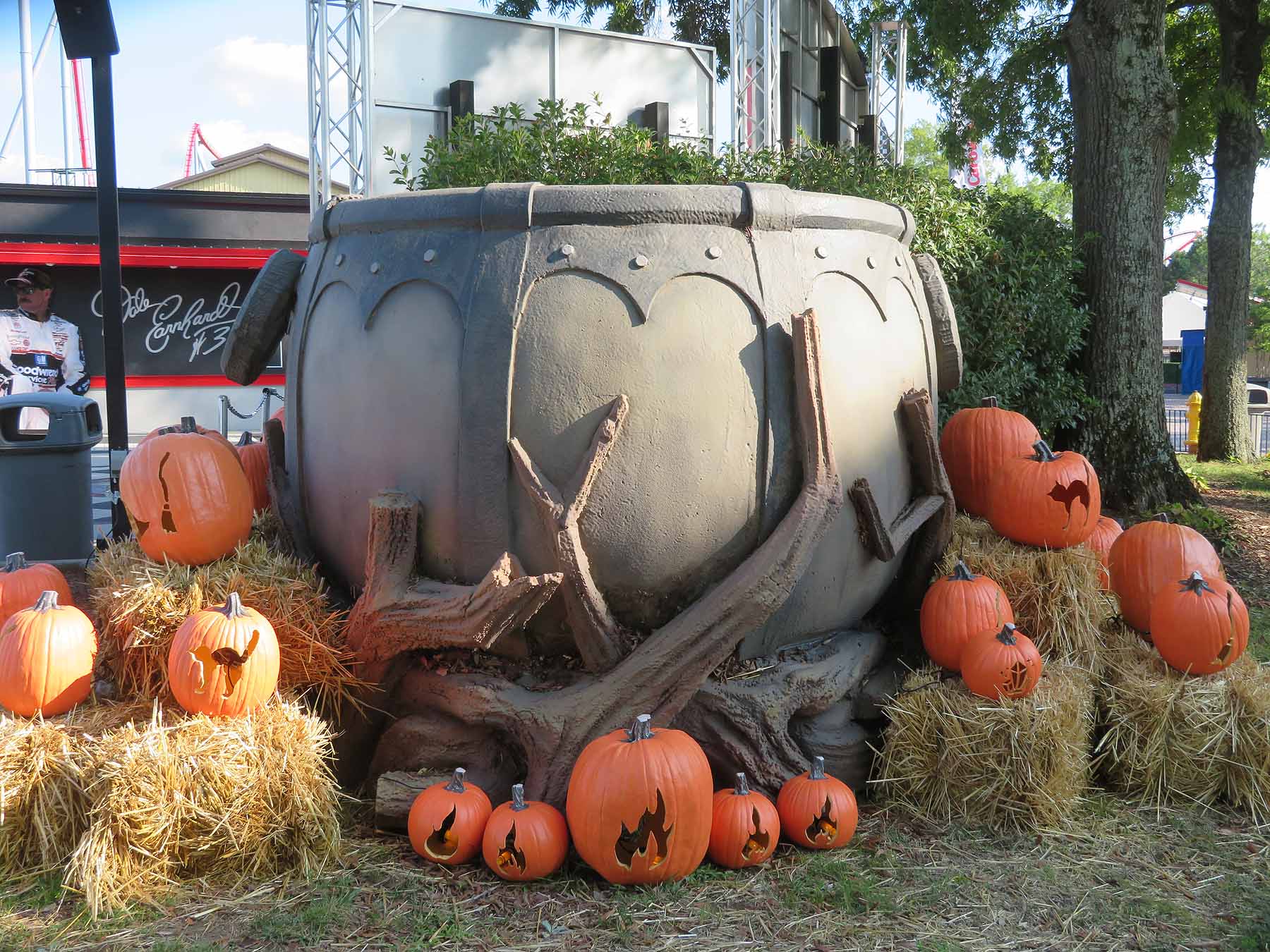 As always, to enjoy the most of your experience at SCarowinds, we recommend the following tips.

SCarowinds takes place on select nights from 7:00pm-12:00am through Sunday, October 30. For more information, make sure to visit SCarowinds’ website.